Is The “Burger King” Coaster Worth Experiencing?

Niagara Falls, Canada is not only home to one of the wonders of the natural world but also to another kind of wonder for roller coaster enthusiasts: The Burger King Coaster. Yes, you read that right. There is a roller coaster on top of a Burger King restaurant and you can ride it. 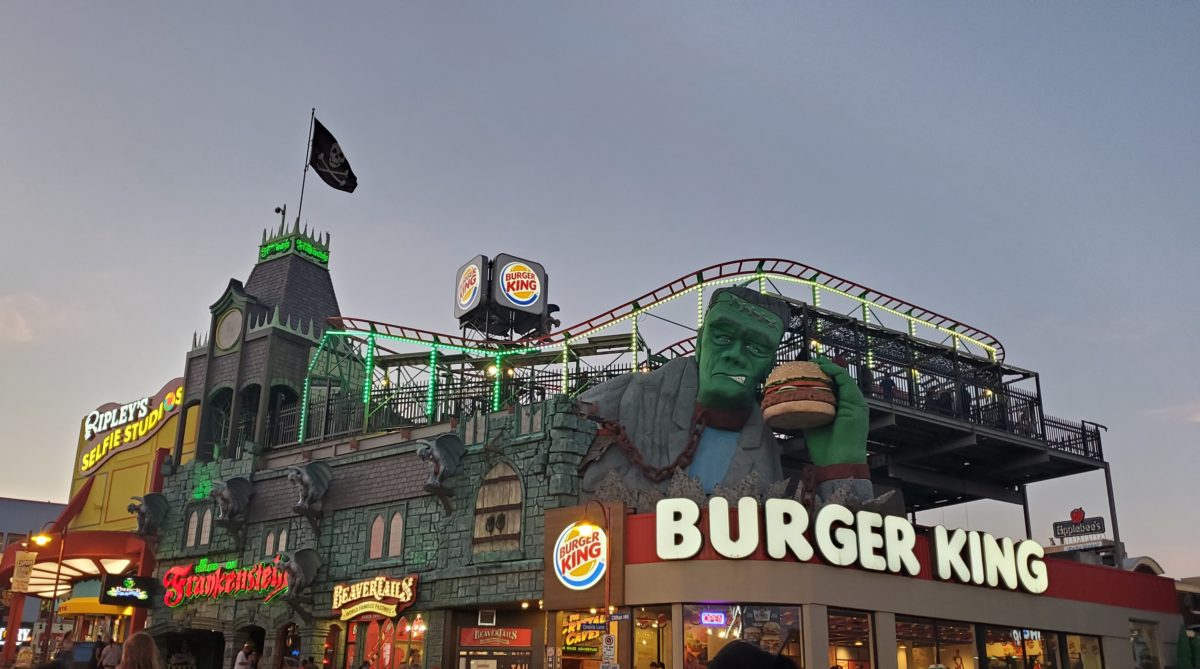 Why put a roller coaster on top of a building? Like other popular tourist destinations (Gatlinburg, Branson, and Myrtle Beach), Niagara Falls is a town stocked full of attractions begging for your attention. Arcades, giant Ferris wheels, go karts, mini-golf, and more with their flashing neon lights and smoke spewing volcanoes are all competing for tourist’s dollars. You have to do something to stand out from the crowd. 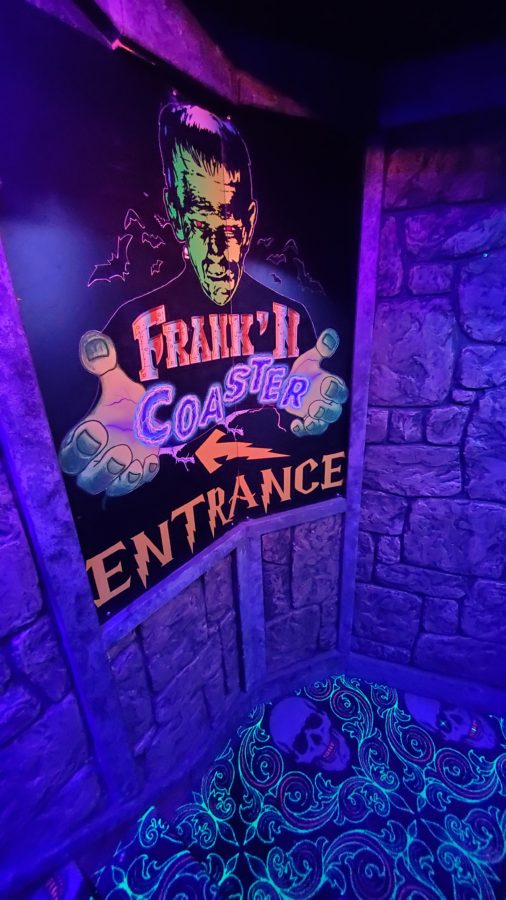 Having a giant, oversized Frankenstein monster eating a cheeseburger attached to their building wasn’t enough for House of Frankenstein, a quirky haunted house attraction located in the popular Clifton Hills promenade. So in 2020, they opened the Frank’n Coaster, a twenty-five foot tall, seven-hundred foot long roller coaster by Wisdom Rides (who also built our beloved Miner Mike). The coaster originally operated at Sports Plus Entertainment Center in Lake Grove, New York as Thriller Coaster from 2004 to 2007 before being installed at it’s new home. 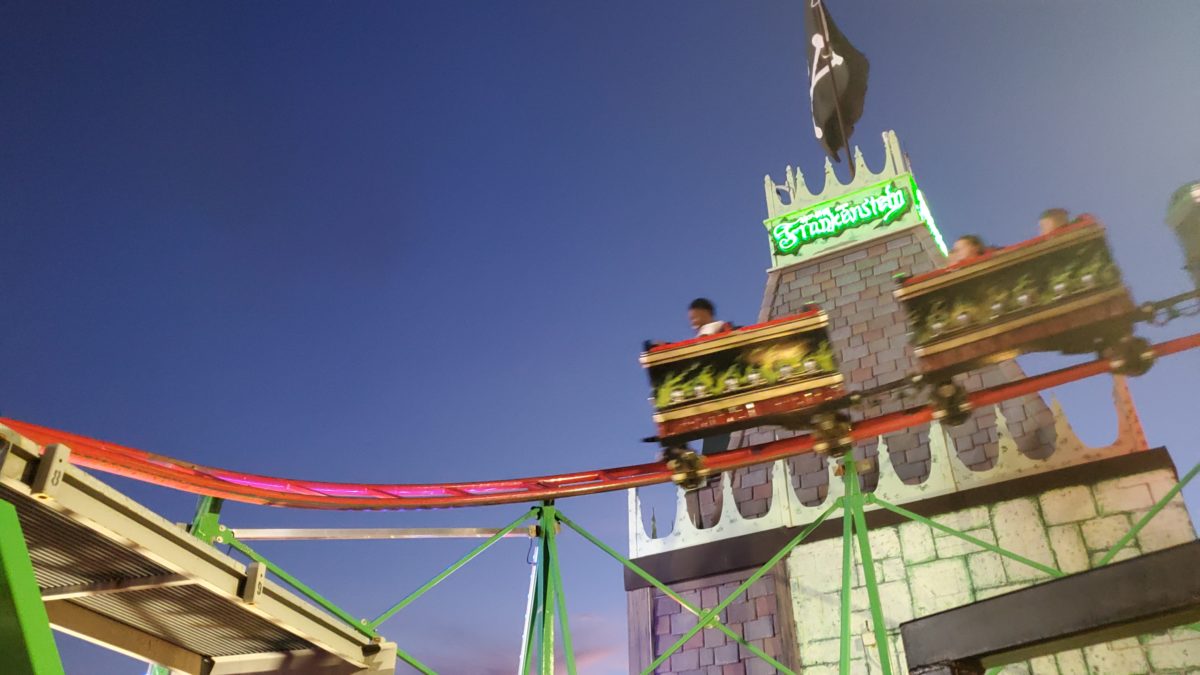 What makes this coaster the least bit interesting is its location two-and-a-half stories above street level. It’s a stroke of genius, not only does the ride act as a giant billboard for House of Frankenstein, but from the street you can only see about 25% of the layout. I imagine if you could view the entire coaster, they would sell remarkably less tickets. The tantalizing premise of a rooftop roller coaster is a lot more interesting than the ride actually turns out to be.

The Frank’n Coaster is essentially a small children’s coaster that only makes left hand turns. The cars of the four-car train are each shaped like caskets and are well padded. The engineer nerd in me noticed the hitches connecting each car together are located on the far left side of the cars, rather than in the center where you would typically find them, to help negotiate the extremely tight left hand turns. If you enjoy lateral gs then this is the ride for you. 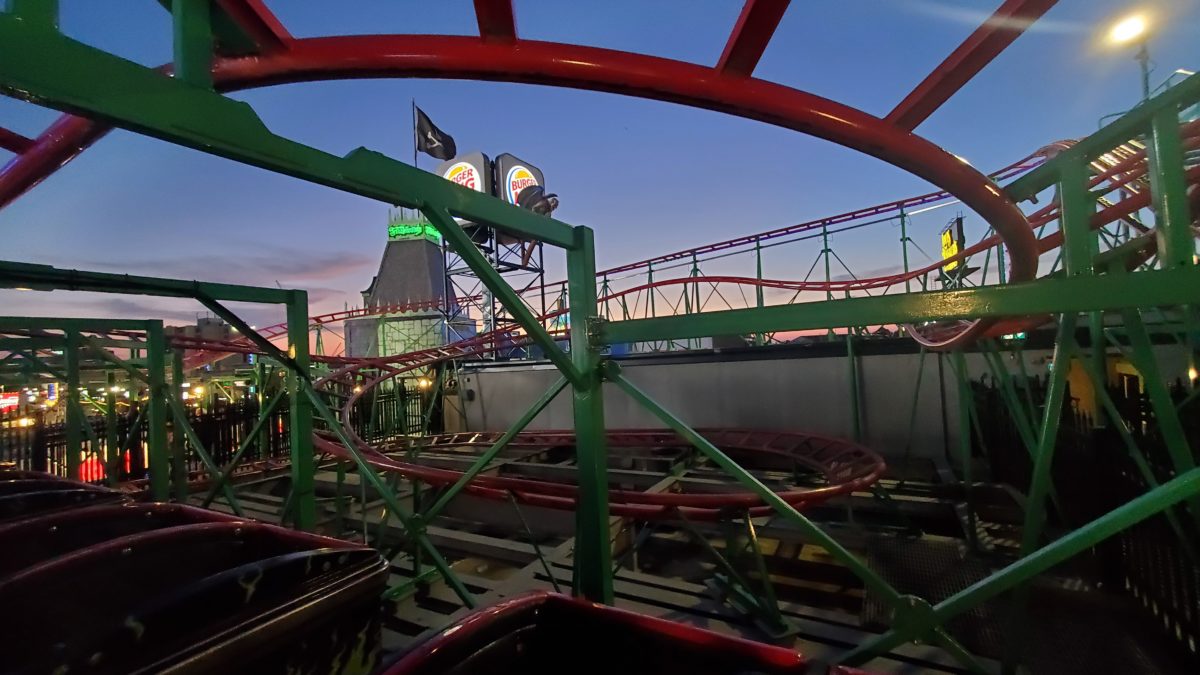 I will say, the Frank’n Coaster did have me a bit unnerved for two reasons: first, this roller coaster has the worst disengagement from the chain lift of any roller coaster I’ve ever seen. When the first car crests the lift hill, it feels as if it wants to jump the tracks followed by an incredibly loud banging noise (see for yourself in the video below). Second, the ride just looks sketchy and you wonder about the maintenance and inspection routines of a small, one-off attraction like this. The thin, temporary looking truss supports don’t give the same feeling of stability as say the large rounded columns of a permanent B&M installation.  As our car careened around the first dropping turn and I could peer straight down at the street below, I was legitimately scared, something not even a 300 foot giga coaster made me feel. At least if we crashed I was already sitting in a coffin. 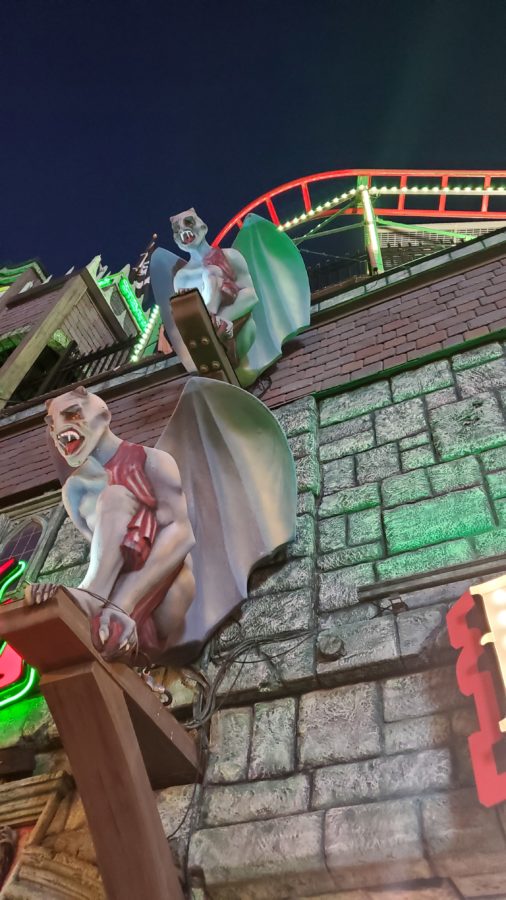 The Frank’n Coaster goes around in a circle three times, with each circle getting progressively smaller and tighter. However, every time it feels like it starts picking up some real speed there are trim brakes to slow you down. One complete lap takes about 60 seconds and you get to go around twice, giving you more time to think about the wasted potential of the rooftop coaster.

Besides the subpar ride experience, my biggest complaint is the cost. Earlier in the day, I spent $18 at Waldameer for four coaster rides, including two trips on a great coaster, Ravine Flyer II. It cost $15 to ride the Frank’n Coaster one time (or $7.50 per lap)! You do not have to experience the haunted house to ride the coaster but there are packages available to do both. There were no ticket prices listed at the ticket window. You had to wait in line then ask the employee what the costs were. For $15 to ride the Burger King coaster, it should at least come with a side of fries or a milkshake. Alas, the Frankenstein monster eating a Whopper is the extent of the tie in between the two businesses, another wasted opportunity.

I first I thought it was broken but I think the coaster was stopped at the end of the video due to someone pulling out their cell phone on the ride.

Have you ridden the infamous Frank’n Coaster aka  “Burger King” coaster? Let us know in the comments below!