During a recent trip to Houston for work, I had some extra time to check out a few “new-to-me” parks in the Lone Star State. While they say “Everything’s Bigger in Texas,” after visiting the compact Galveston Island Historic Pleasure Pier, the second park on my to-do list was the equally as small, but slightly more spread out Kemah Boardwalk, located less than 25 miles northwest of the historic Pleasure Pier, as the crow flies. It was a perfect addition to our recurring Small Park Showcase series.

Like Galveston Pleasure Pier, Kemah Boardwalk is owned and operated by Landry’s Inc., primarily known for their extensive restaurant portfolio. Landry’s acquired the land for Kemah Boardwalk, located along Galveston Bay in 2007, and opened Kemah Boardwalk in 1998. Across its campus, primarily designed to entice tourists with its restaurant and hospitality offerings moreso than attraction offerings, Landry’s has packed the space with a number of its own restaurants – including Joe’s Crab Shack, Bubba Gump Shrimp Co., Saltgrass Steakhouse, Landry’s Seafood House, and the Aquarium Underwater Dining Experience. 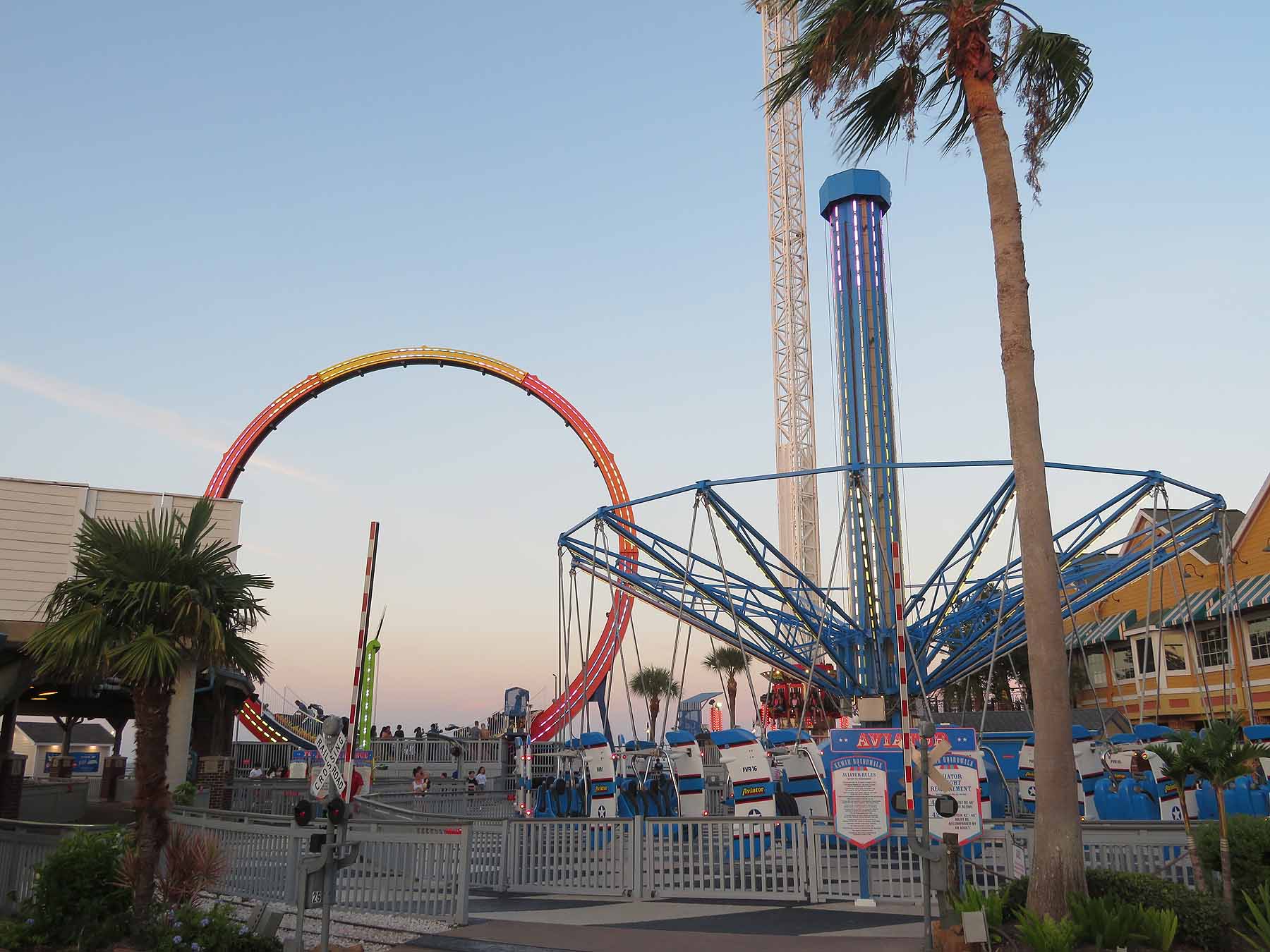 However, we’re not here to cover restaurants. For those looking to scratch the amusement park itch while visiting Kemah, the Boardwalk features 13 amusement rides including the iconic Boardwalk Bullet roller coaster, the Iron Eagle zip line, and a 25-minute speedboat attraction known as the Boardwalk Beast. While there is no admission fee to enter Kemah Boardwalk, each of the rides has an a la carte ticket price of $6.00-$7.00. A ride-all-day wristband is also available for $25.99 for those over 48″ tall — $19.99 for those under four feet tall! Note that the Iron Eagle Zip Line and Boardwalk Beast speedboat are not included in the all-day ride wristband. 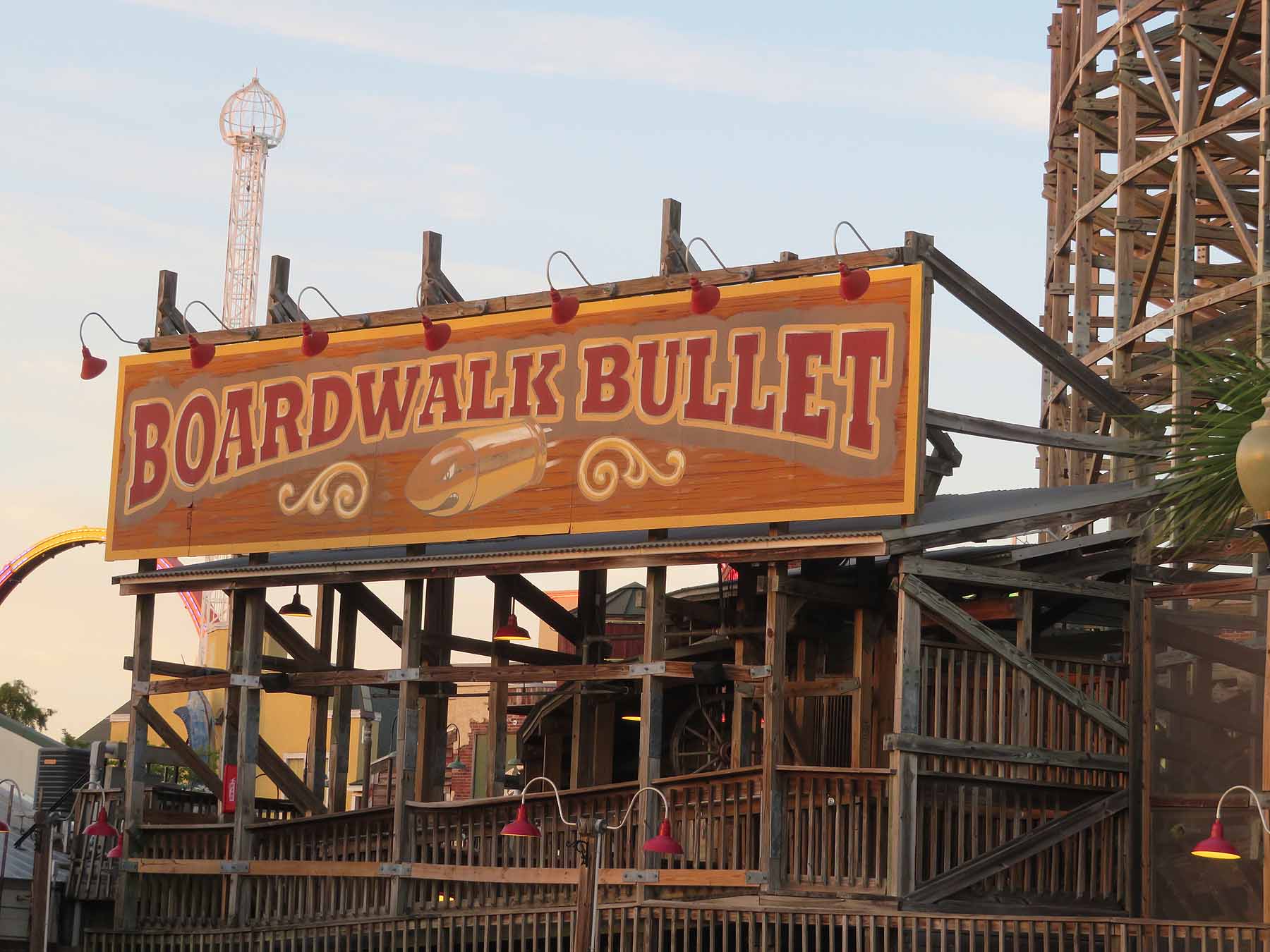 Like our trip to Galveston Island Pleasure Pier, as a coaster enthusiast, we had just one attraction on our minds while visiting Kemah Boardwalk – Boardwalk Bullet. Opened in 2007, the Gravity Group-designed wooden coaster was built by Martin & Vleminckx, and features trains from the historic Philadelphia Toboggan Coasters. Boardwalk Bullet stands 96′ tall, and reaches a top speed of 51mph. Somehow, the Gravity Group managed to fit 3,236′ of track on Boardwalk Bullet into a single acre, and according to Kemah Boardwalk, the coaster has the most number of track crossovers ever designed into a wooden coaster – 42 in total! (We’ll touch on this more shortly.) 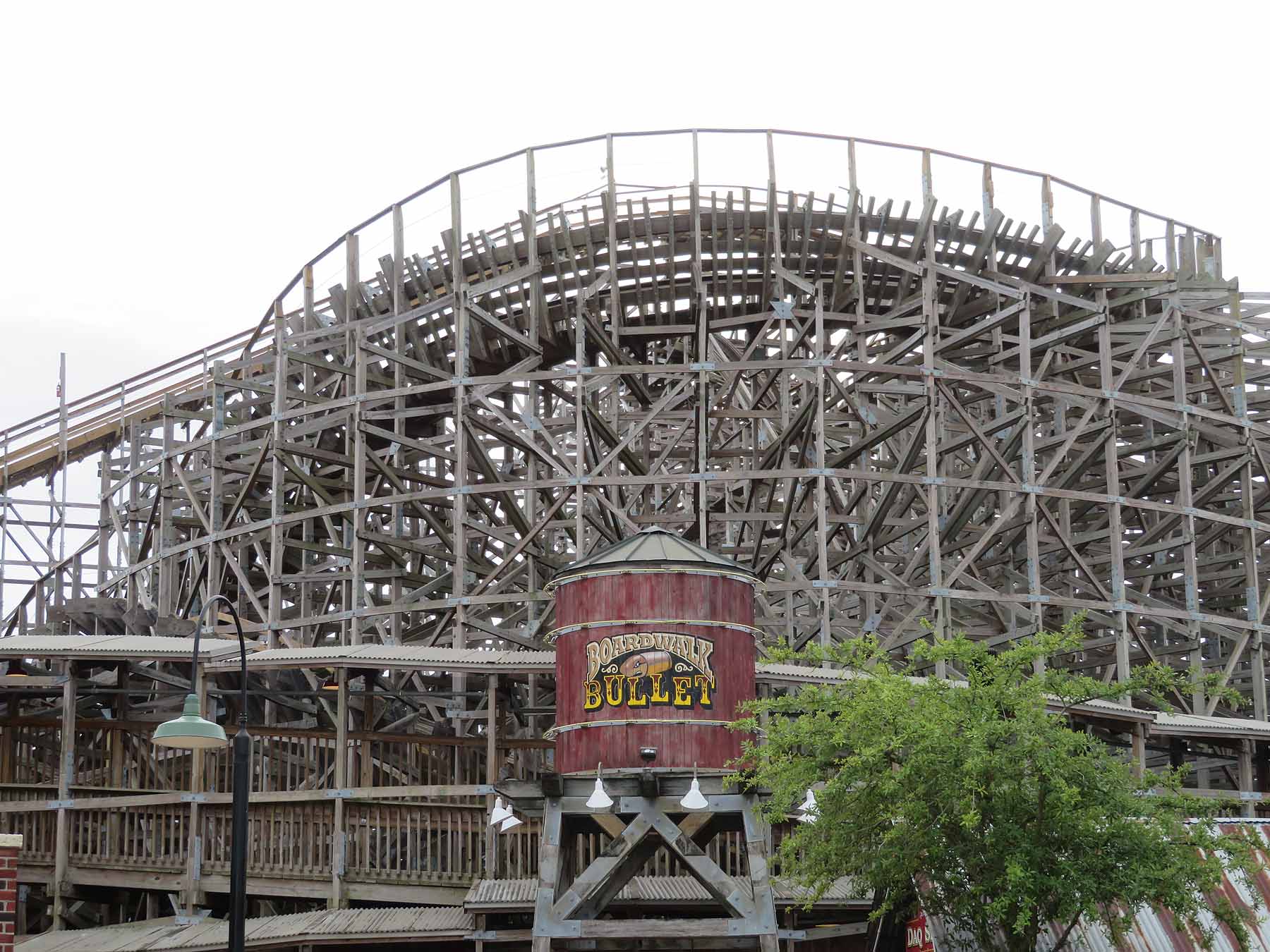 However, our ride on Boardwalk Bullet almost didn’t happen. Upon arriving in Texas, we landed at Houston’s Bush Intercontinental Airport, and headed straight to Galveston. If you’ve read our Small Park Showcase on the Galveston Pleasure Pier (or listened to our podcast!), you’ll know that the weather wasn’t our friend on this day. We had to wait to ride Iron Shark, but eventually got on. After leaving the Pleasure Pier, we headed straight to Kemah, in an attempt to squeeze in a Boardwalk Bullet ride before dinner. The weather was not on our side, as a thunderstorm had rolled through the area during our 40-minute drive north. The park was in various stages of re-opening when we arrived, including a few test runs of Boardwalk Bullet, so we decided to try to wait it out. After about a half dozen tests, all activity on Boardwalk Bullet stopped. With dinner plans on the horizon, we had to get going, fully resigned to the fact that we would take an “L” on this visit, and come back sometime in the future. 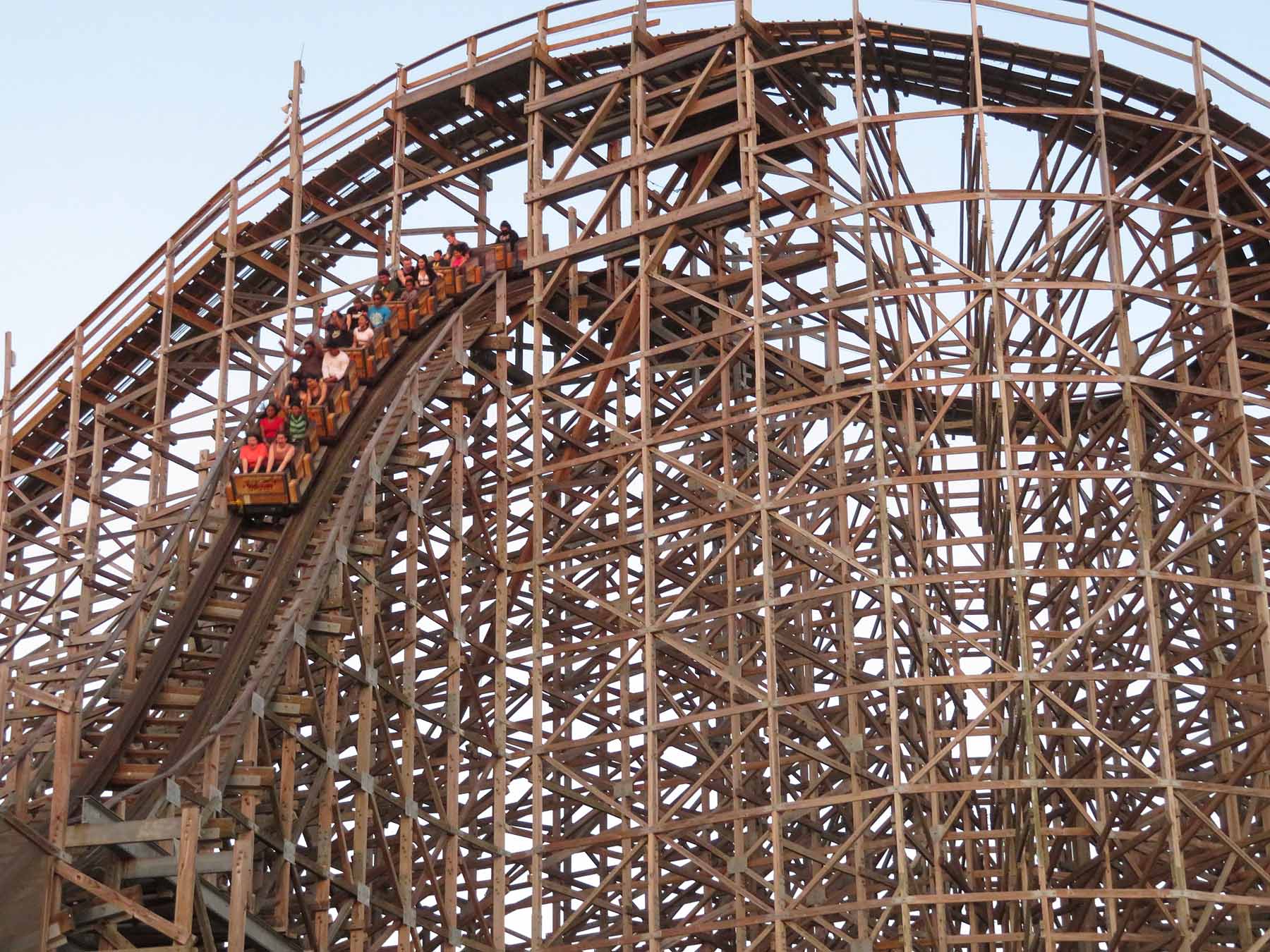 Fortunately, the future just meant several days later. Work ended early one night, and it was the best possible opportunity to get back down and ride, even with a 50-minute drive each way from Houston. We’d come this far, and the mental image of Boardwalk Bullet’s 42 crossovers, sitting there, unable to ride during the first day, was forever burned into our brain. After verifying that Boardwalk Bullet was open — the park did not answer the phone, but the Saltgrass Steakhouse, adjacent to the roller coaster, answered the phone and confirmed it was open – we got in our rental car and headed back down to Kemah. Arriving at the park at 8:15pm ahead of a 9:00pm closure, I headed to the ticket booth and purchased a single-ride ticket for Boardwalk Bullet. (Note: I would have considered multiple rides, but it felt like operations weren’t exactly fast based on waiting to take the above photo, and time wasn’t on my side.) 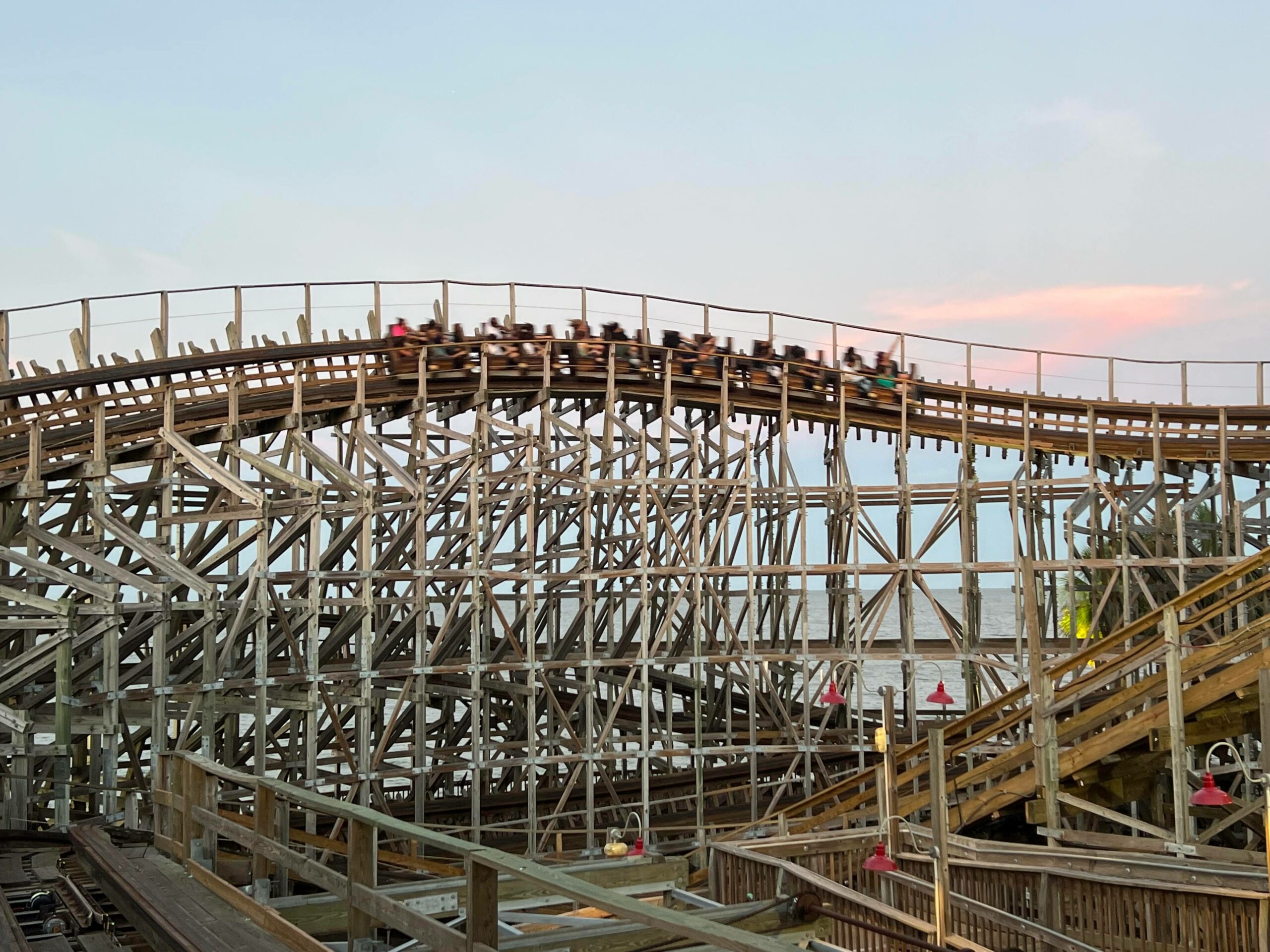 With the opportunity to take just one ride, I waited for the front row — which turned out to be a three-train wait. However, with one-train operations, that ended up being about 25 minutes. By this time, the sun had set, and our ride took place at dusk, which only added to the experience. Boardwalk Bullet is an amazing example of everything Gravity Group does well when designing a roller coaster. Banked curves, smooth (as a wooden coaster can be) transitions, and darting up, down, around, in and out of the Boardwalk Bullet structure to the point that the coaster’s layout was impossible to comprehend during my ride (I didn’t count the 42 crossovers, but I’m almost certain they’re all there, and they might have missed a few, to be honest.). There were multiple fly-bys near the station, and it’s truly impressive the amount of track that Gravity Group and Martin & Vleminckx were able to fit in such a tight space.

There could certainly be some recency bias, but Boardwalk Bullet was definitely among the best wooden coasters I’ve ever ridden. It reminded me a lot of coasters like Kentucky Rumbler at Beech Bend or Ravine Flyer II at Waldameer — truly world class coaster experiences that are located significantly off the beaten path. Point being, if you find yourself in Houston or the surrounding metro area, find your way to Kemah, spend the $7.00 to ride Boardwalk Bullet. You won’t regret it. 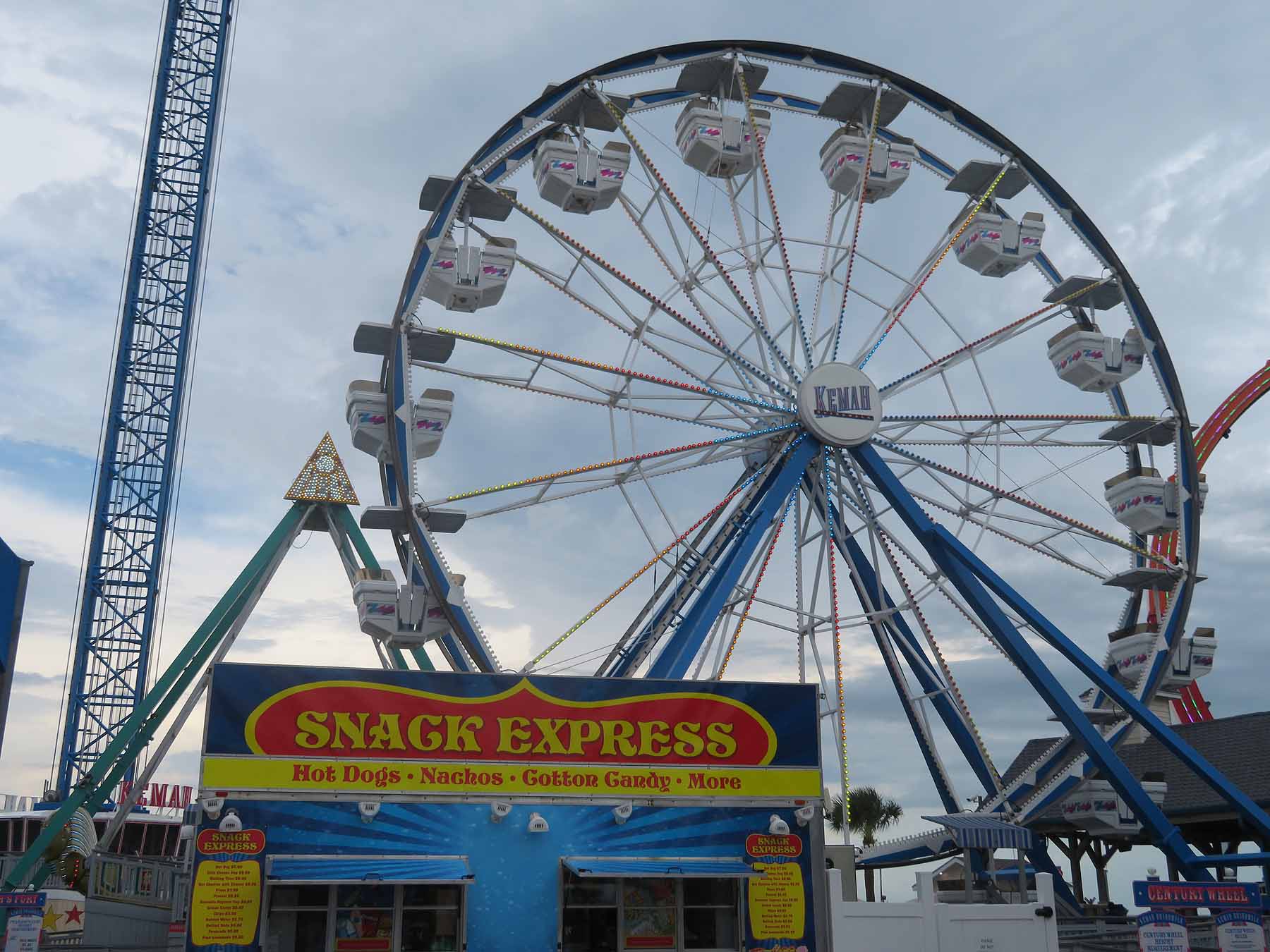 Outside of Boardwalk Bullet, Kemah Boardwalk’s ride line-up features a number of classic amusement park attractions; a double-decker carousel, Ferris Wheel, Tilt-A-Whirl, Drop Tower, Observation Tower, Larson Loop and Swinging Pirate Ship. There are a few other attractions, like a kiddie Ferris Wheel, Frog Hopper, and Rockin’ Rocket, a Rockin’ Tug from Zamperla, currently branded to the Houston Rockets, that could appeal to younger park guests and families. But, chances are, if you’re reading our website, you’re here for Boardwalk Bullet more than off-the-shelf flat rides or chain restaurants. (That was definitely the case for our visit to the park, anyway!) 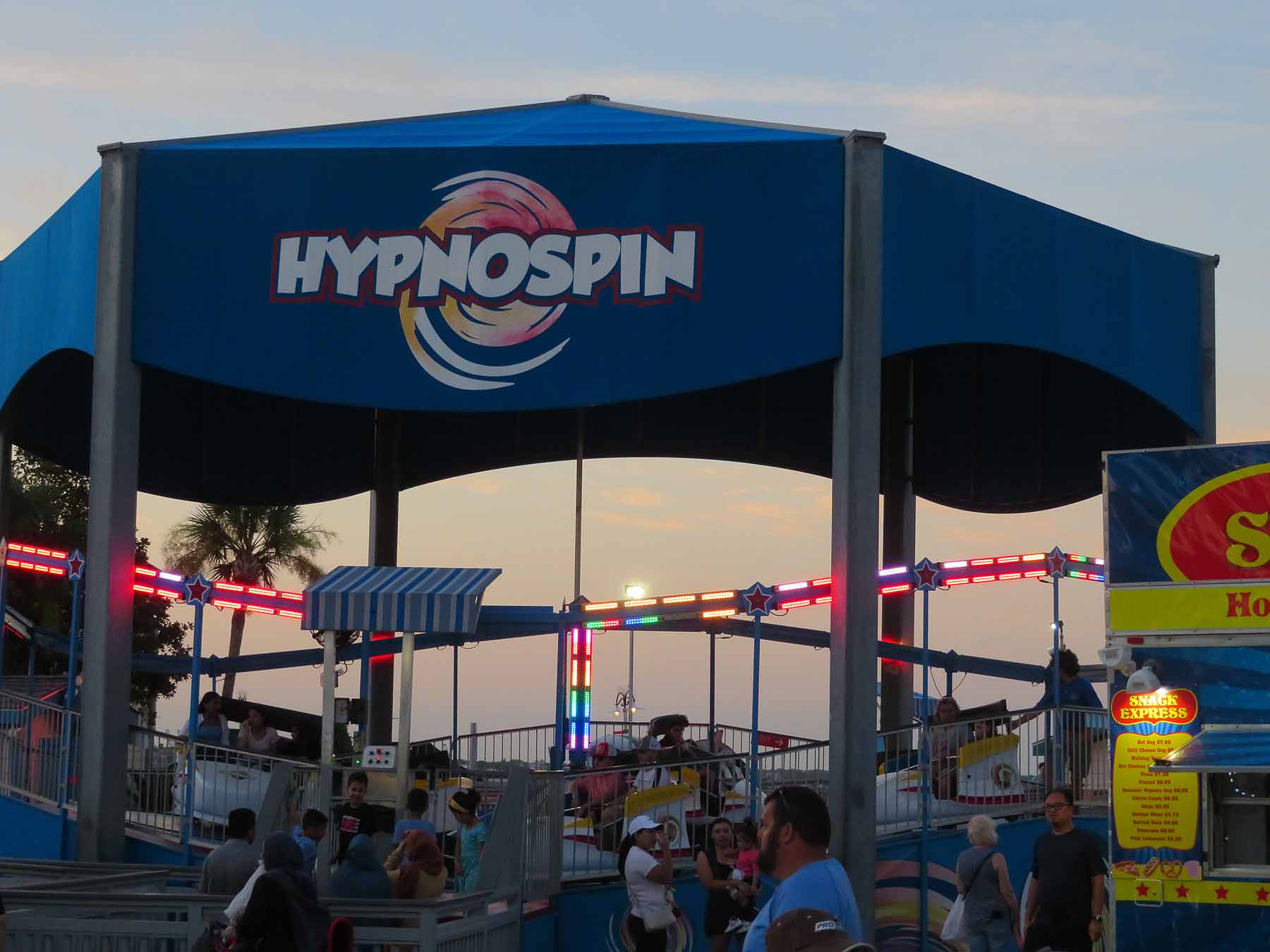