Welcome to our latest edition of Park Battle, where we put two similar amusement parks head to head and compare everything they have to offer. Today we take a look at two similarly sized parks often described as being located “in the middle of nowhere”, yet somehow one is revered while the other is frequently ridiculed by roller coaster enthusiasts. It’s Santa Claus, Indiana’s Holiday World versus Michigan’s largest amusement park, Michigan’s Adventure. Now you may be thinking Holiday World is the hands-down winner, no debate needed, and if you’re a well traveled coaster enthusiast that might be true, not every member of the family may agree with you.

First, let’s meet our competitors. Michigan’s Adventure opened in 1956 as Deer Park, was renamed in 1988, and later purchased by Cedar Fair in 2001. The WildWater Adventure water park opened in 1990 and is included in the cost of admission to the dry park. The same is true for our other competitor. Santa Claus Land opened on August 3, 1946, then changed their name to Holiday World in 1984.  The Splashin’ Safari water park was added in 1993.

Why compare Michigan’s Adventure and Holiday World? Our previous Park Battles have been between two parks from the same chain with the same parent company. While these two are not, they share many similarities: 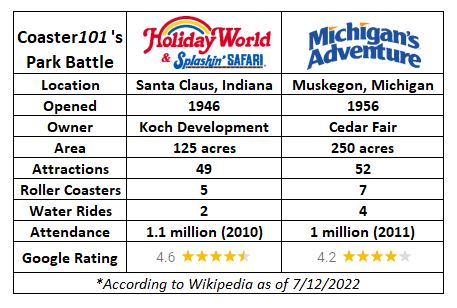 Now it’s time to put the parks head-to-head in twelve different categories where we’ll choose a winner for each. The park that wins the most categories will be declared the Park Battle Champion.

As already mentioned, both parks have been described as being in the middle of nowhere, meaning not immediately outside a major city. However, at the same time Holiday World could be described as being the middle of everywhere. Holiday World could be added on as a stop to a multitude of other destinations. The only real reason you’d be driving past Michigan’s Adventure is to visit northern Michigan. Michigan’s Adventure is out of the way if you’re traveling between amusement parks – it’s 4.5 hours to Cedar Point. Holiday World is only about an hour from Kentucky Kingdom in Louisville and three hours from Kings Island.

Winner: No contest. Since the location isn’t something the parks can easily change we won’t declare a winner. 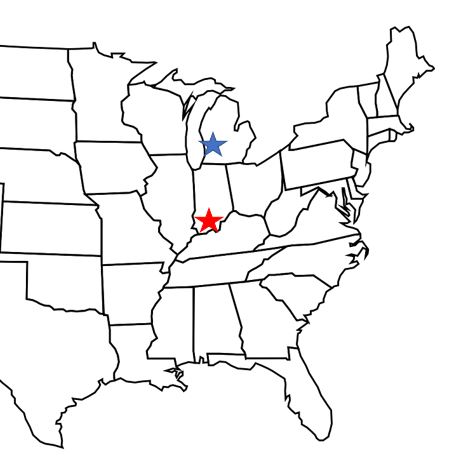 This one’s easy. Michigan’s Adventure has no theme while Holiday World is themed to four main holidays: Christmas, Halloween, Thanksgiving and the Fourth of July. 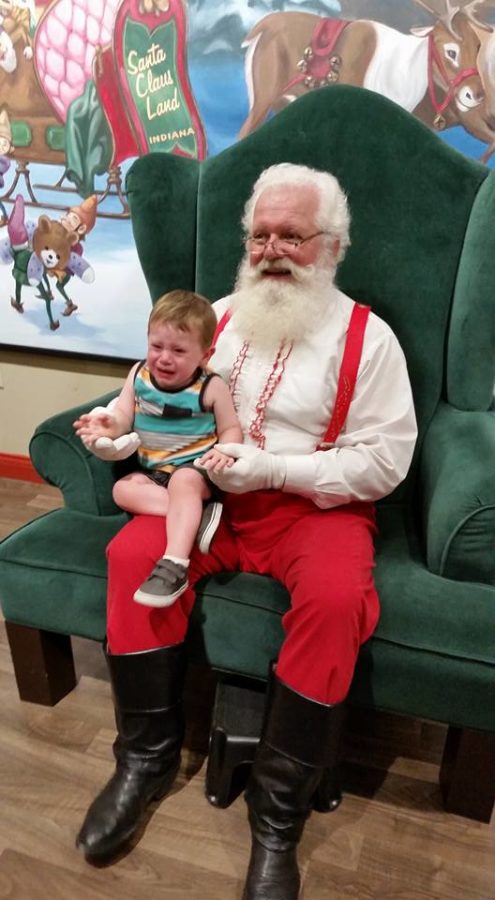 Well, not everyone loves the theme…

Interestingly, both parks have a lake on their property. However, Holiday World’s Lake Rudolph is not utilized other than an over-the-water turnaround on Raven. Michigan’s Adventure is laid out in a U-shape around their central lake resulting in great views of Wolverine Wildcat and Thunderhawk coasters, especially from the Lakeside Beer Garden. You can get even closer by taking a relaxing swan boat ride on the water too. Though I do love the forested nature of Holiday World’s hills, and the coasters take great advantage of it, not everyone enjoys hiking up and down a hilly park. I’m going to give the slight edge to Michigan’s Adventure here.

In this round, we’re comparing the two biggest, most thrilling roller coasters at each park. For Michigan’s Adventure, you have Thunderhawk, a Vekoma SLC originally opened at Geauga Lake in 1998 as Serial Thriller, before being moved and opening at its new home in 2008. The star attraction of the park is Shivering Timbers, a 125 foot tall Custom Coasters International project opened in 1998. It’s still the fourth longest wooden roller coaster in the world and has been ranked as high as second in the Golden Ticket awards for best wood coaster (though I did not enjoy my latest rides on it). When your two best coasters are 24 years old, that’s not great. 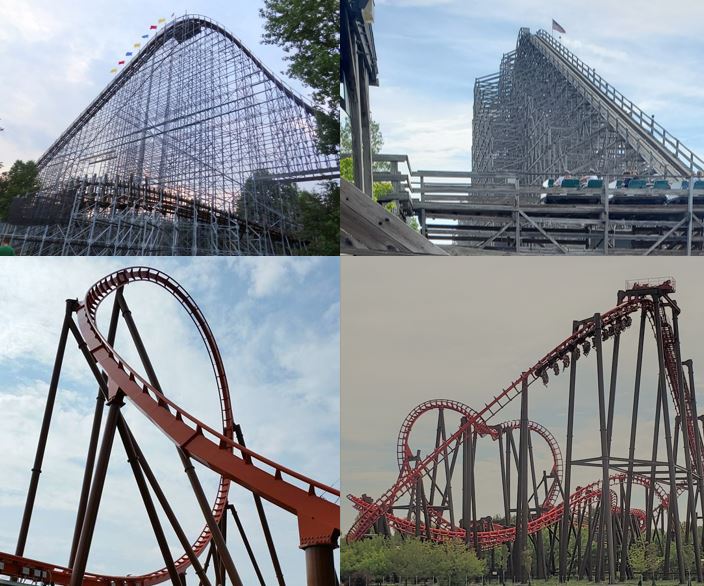 Holiday World’s biggest weakness is they have no roller coasters for anyone between then 36 inch and 48 inch height requirement. This is quite shocking for a park that advertises they’re #1 for family fun. Michigan’s Adventure on the other hand has a better lineup for young coaster enthusiasts looking to slowly advance from smaller to larger rides. 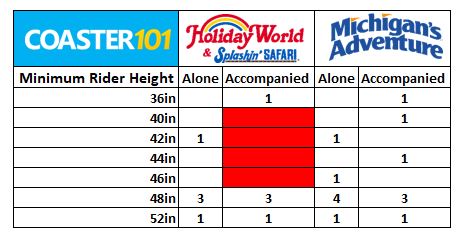 Winner: Michigan’s Adventure (for those keeping tally at home the score is 2 – 2)

Holiday World’s best family ride is the Gobbler Getaway Sally Corp interactive dark ride while Michigan’s is….probably the swan boats. Both parks have a train ride but that state up north’s is better and can actually be used as transportation. Both have swinging ships but Michigan’s location out on the lake is better. Holiday World does not have a staple of the amusement park midway, the Ferris wheel, like Michigan’s Adventure does. Holiday World also does not have a petting zoo. And to top if all off, Michigan’s Adventure just opened a new and improved Camp Snoopy children’s area. 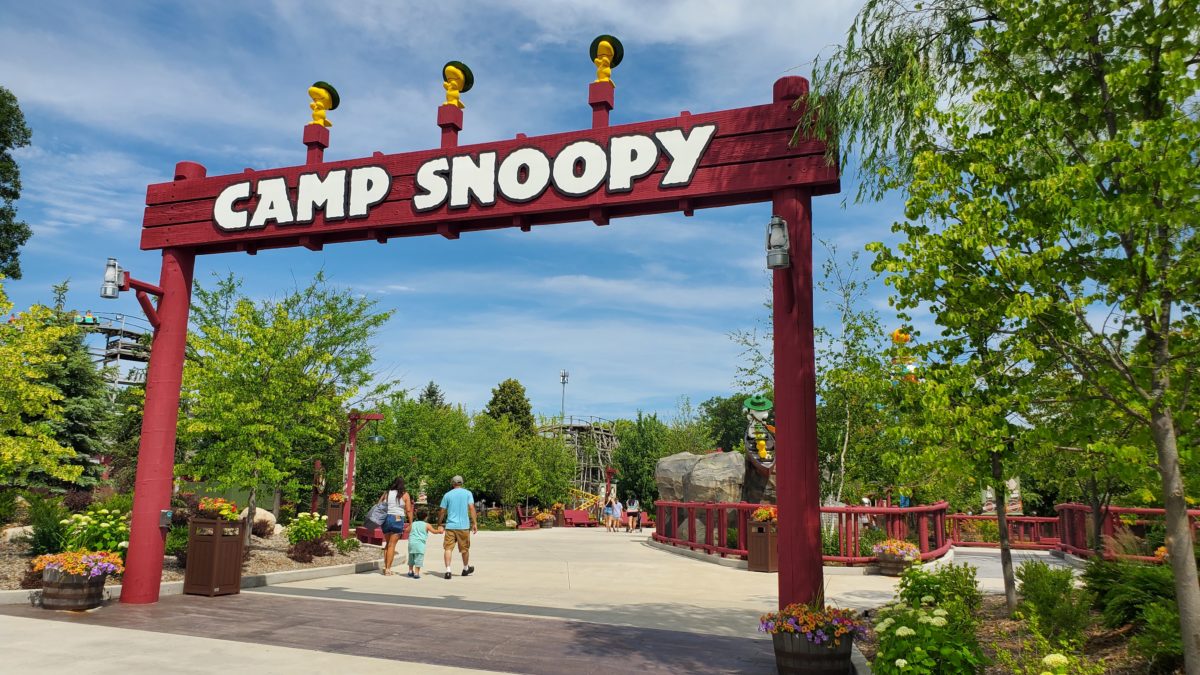 Winner: Michigan’s Adventure (and it takes the lead 3-2).

Michigan’s Adventure’s water park, WildWater Adventure is not bad by any means. My family spent several hours there and had a ton of fun. But Holiday World’s Splashin’ Safari is the water coaster capital of the world and is just all around awesome. Airtime on waterslides? Yes, please. They’re one of the few water parks that understand capacity too. Splashin’ Safari hands down wins this round. 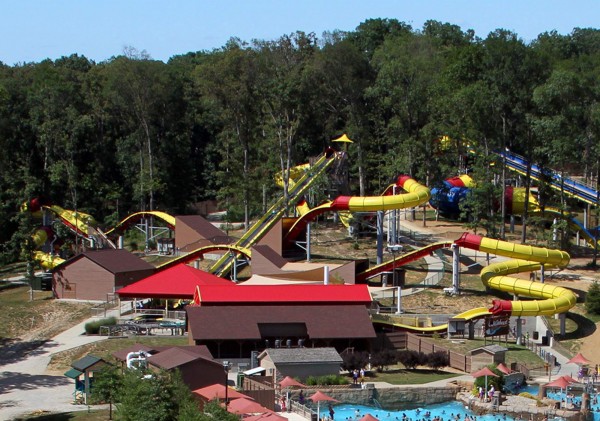 During my latest visit to Michigan’s Adventure in July 2022, there were no shows that I knew of. Holiday World has several shows, including the new for 2022 Holidays in the Sky drone and firework show as well as the classic Dive show, where they even light one of their divers on fire!

Michigan’s Adventure is the only Cedar Fair park to not have any Halloween-related events. Besides the family-friendly Happy Halloween Weekends, Holiday World is known for having one of the best annual roller coaster enthusiast events in the country – Holiwood Nights. 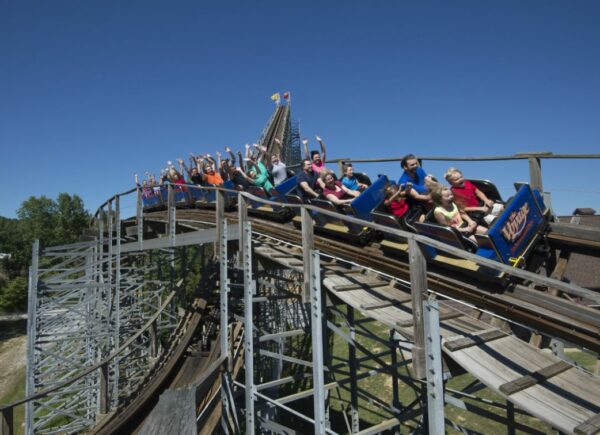 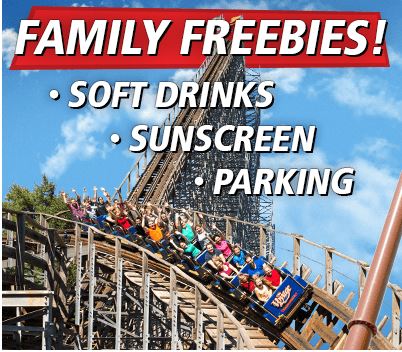 On our recent visit to Michigan’s Adventure we did not eat inside the park, therefore I feel unqualified to judge this category. I feel Holiday World probably has this one won but we’ll call it no contest to be fair.

Round Twelve: Water Rides (in the dry park)

For our final round we’ll be judging the water rides found in the dry park. I’m glad to see both parks still have classic log flumes and river rapids rides. But in addition to those, Michigan’s Adventure has the Adventure Falls shoot-the-shoots ride as well as the HydroBlaster enclosed water slide. Slight edge to Michigan. 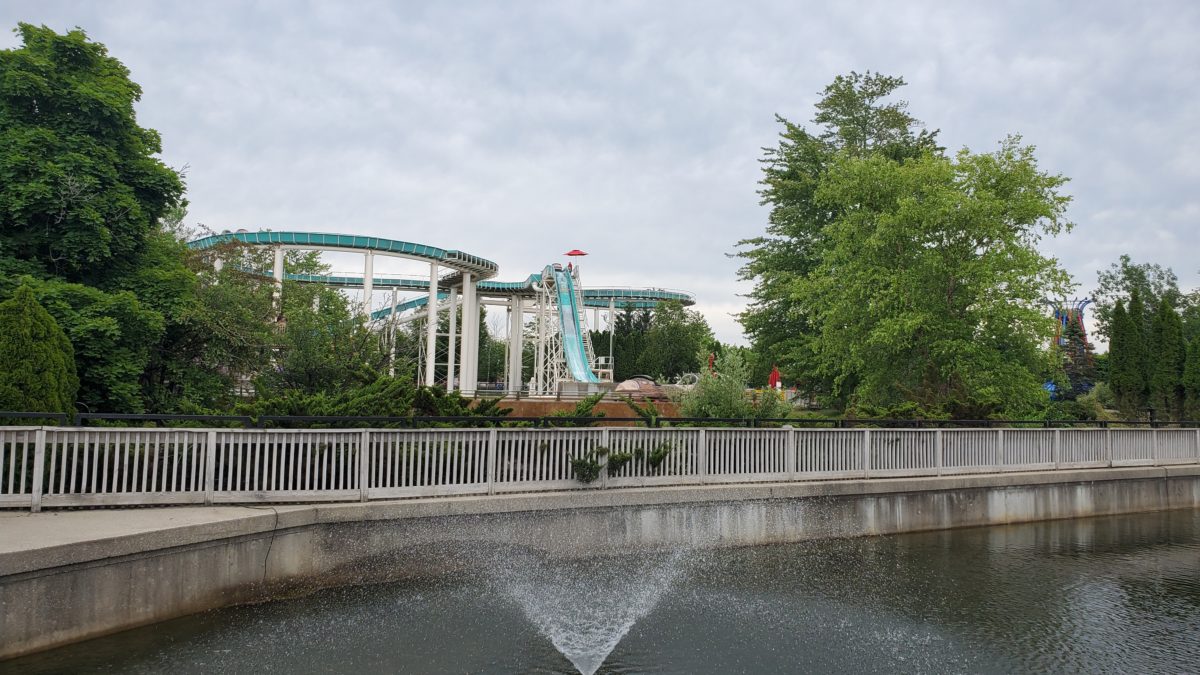 And the Winner is…

Out of twelve rounds, two we decided were no contests, therefore the final tally is….drum roll please….Michigan’s Adventure: 4, Holiday World: 6. 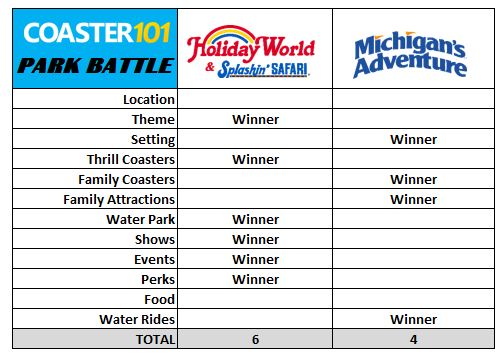 Two similar parks, two different business models. I like thinking about “what ifs” in the amusement industry, like what if Michigan’s Adventure had stayed family owned and used Holiday World’s management strategy? What if they had free parking, free soft drinks, and put on a really good event for coaster junkies? What would coaster enthusiasts opinion of the park be then?

Would you like to see more Park Battles? If so, throw out a suggestion for which parks should go head-to-head in the comments below!