Isn’t it odd how sometimes there’s a park somewhat close to you that you still haven’t visited? Kings Dominion was one of those parks for me until recently when I decided to visit the park on my trek down to Virginia for Pantheon at Busch Garden Williamsburg. Ideally located right off 95 in Doswell, Virginia, it seemed like a no-brainer to stop at this park for Intimidator 305 and Twisted Timbers, two coasters that have loomed on top of my bucket list for a very long time. Without further adieu, here are my top 10 coaster rankings for Kings Dominion: 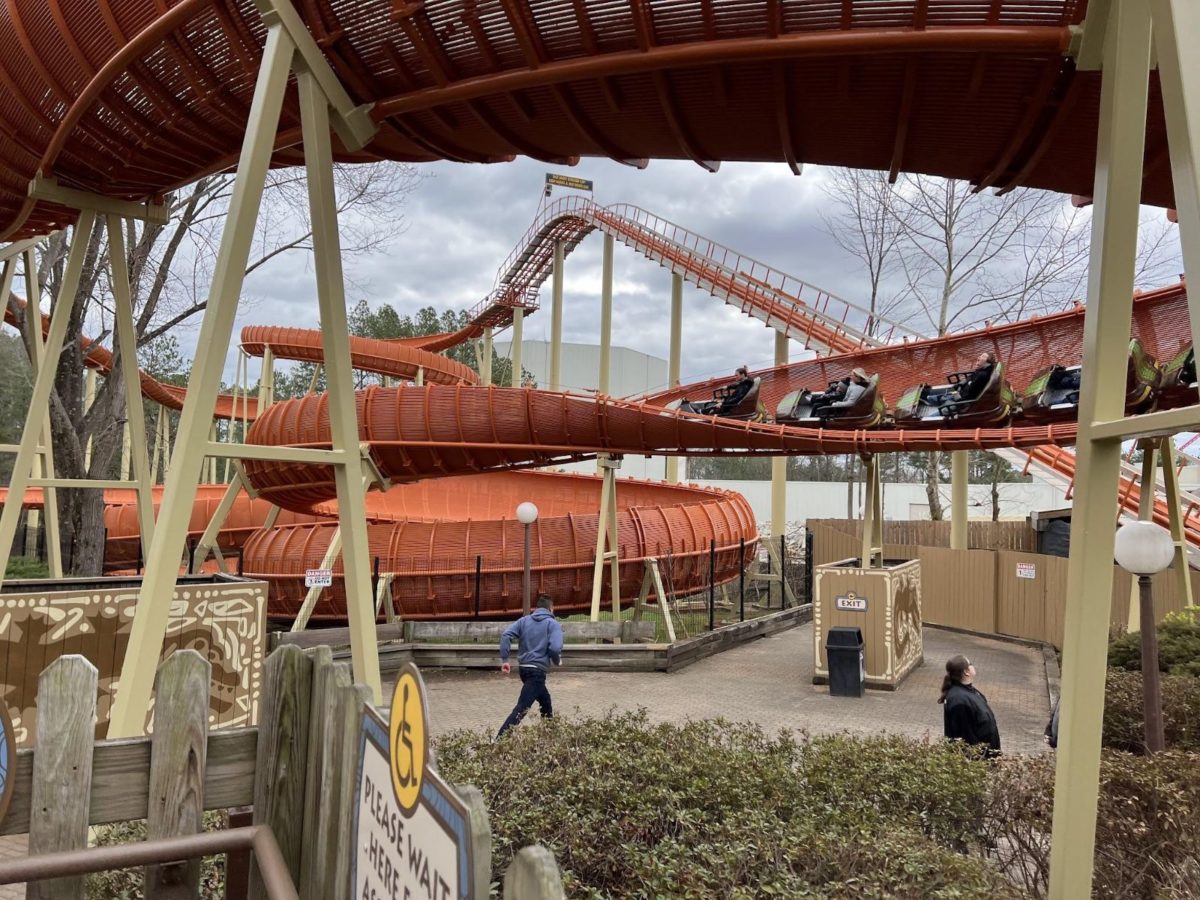 Having only Alpine Bobsled at Great Escape to compare Reptilian, this was a fun ride with some tight turns, but it felt like something was missing. Reptilian didn’t have the speed I was hoping for from this Mack Bobsled, emphasizing how there are simply better, newer rides out there. Reptilian really isn’t a “bad” ride by any means, the hairpin turns were really fun for me and the new theme on the brake run plays really well, but I find rides packed with large drops, airtime hills, and intensity to be more fun for me.

I enjoy rough wooden coasters just as much as the next coaster enthusiast, but this ride threw me in directions I wasn’t expecting, for better and for worse. What seemed like a promising ride into the woods turned into a painful experience, one that I did not feel the need to ride again. It seems unlikely for layovers Rocky Mountain Construction (RMC) to add IBOX track to a second wooden coaster in the same park, but that would help Grizzly immensely. 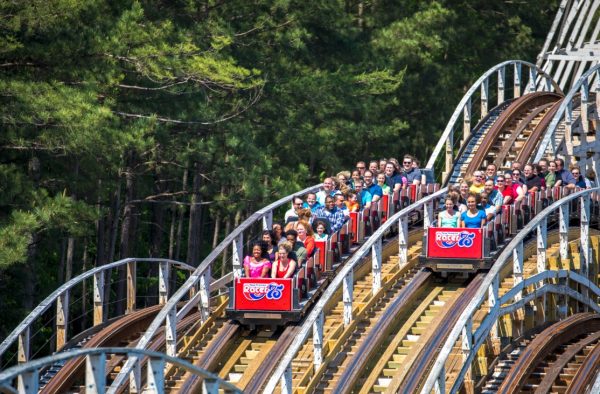 A simple out-and-back wooden coaster, that’s pretty much all there was to this ride. To my disappointment, Racer didn’t have the airtime I was expecting, but was overall a generally smooth ride with not much to complain about from such a simple layout. My biggest takeaway from this ride was the magnificent view of I305’s lift hill that centered itself throughout half of the ride. I was only able to ride the North side, but maybe the South side is a better experience? My expectations for this coaster were not very high to begin with and even with a backrow ride, I just was not getting the airtime that I was hoping for. 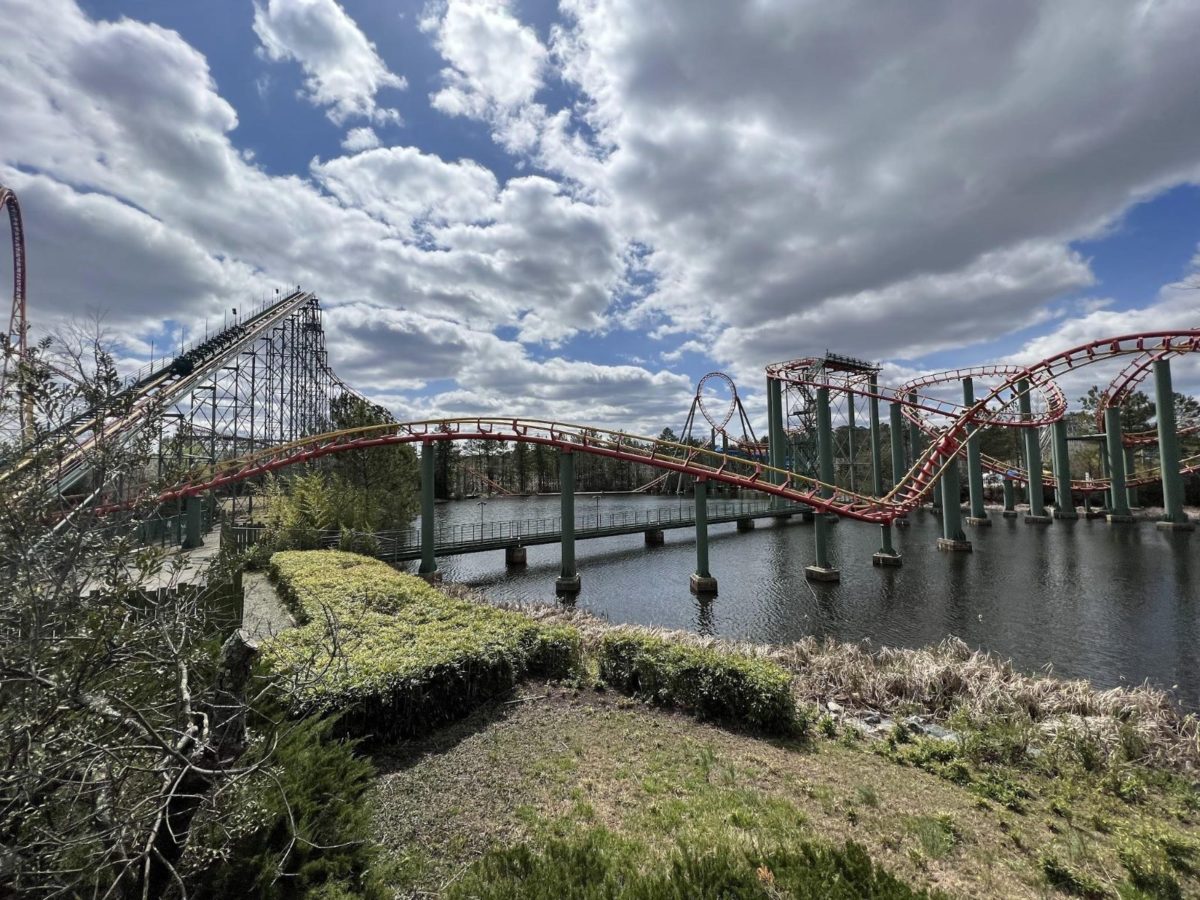 What more could be said for an Arrow Looper that hasn’t been said already? On my single ride, Anaconda delivers a head-banging experience that is almost a novelty at this point, with the added bonus of being placed over a scenic lake. I braced myself before every turn and inversion, almost focusing more on the pain rather than the ride itself. If it weren’t for the placement of Anaconda over the lake, this ride would be higher on my rankings. Even with the roughness, one of my favorite moments from my day at Kings Dominion was Anaconda’s final pair of corkscrews, which made me feel as if I was going to fall out of my seat and into the lake.

This Premier Rides coaster really packs a punch. I was pleasantly surprised by the double inclined helix after the first launch that almost caused me to gray out, as well as the theming that boosted the ride experience. I thought the layout of this ride was really well thought out, packed with launches, bunny hills, and especially the twisted tracks during the indoor section. Thankfully, all the special effects were working on my ride, however, it did seem a little outdated. I’ve been hearing in the Kings Dominion rumor mill that Backlot Stunt Coaster could see a retheme to fit the brand-new Jungle Xpedition area, which makes me excited to see what else the park can do to better this ride. 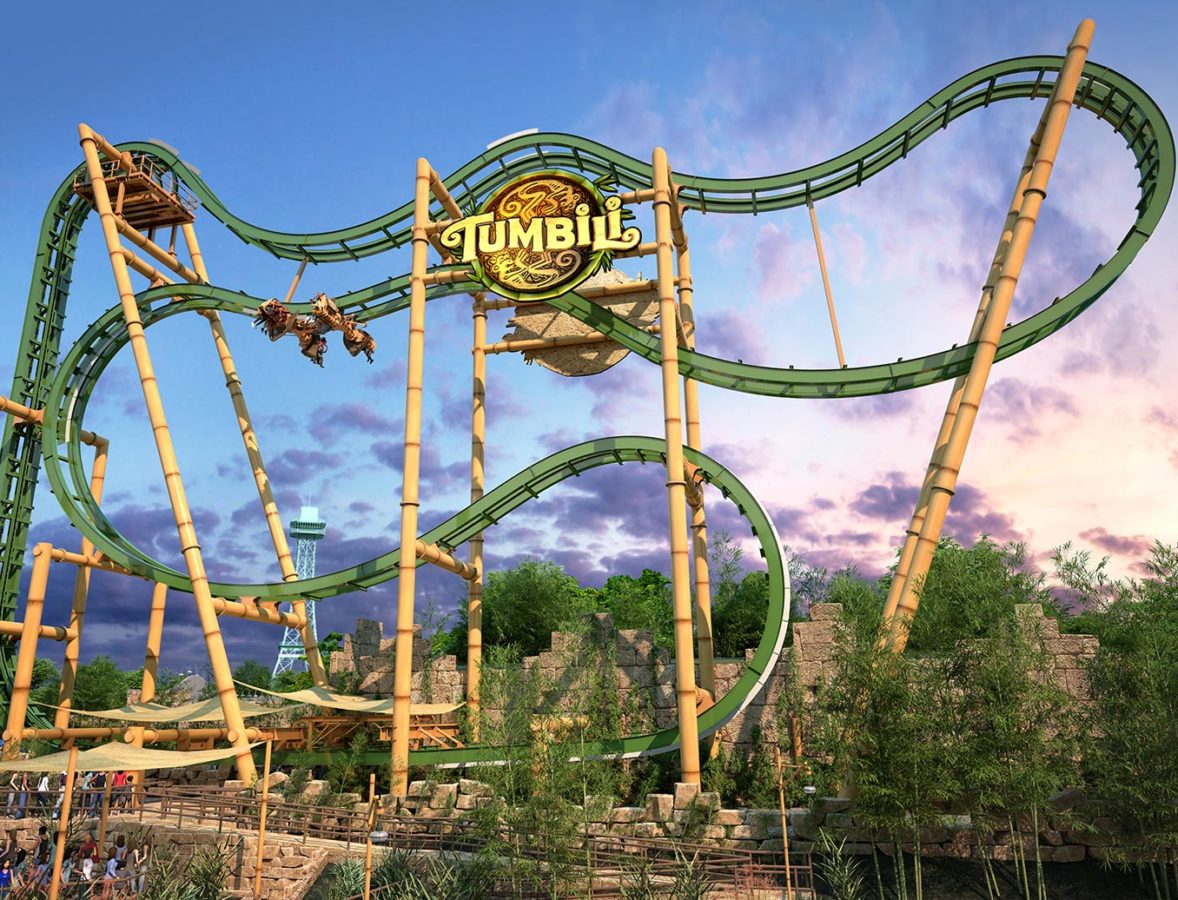 This beautiful S&S 4D Free Spin coaster is a welcomed addition to Kings Dominion. It’s a compact version of the same coasters that can be found at most Six Flags parks across the country. I recall getting three full spins on Tumbili, in comparison to the five or six I would typically receive on Joker (also an S&S 4D Free Spin) at Six Flags Great Adventure. It’s the attention to detail with the theming here that steals the show as you enter the model excavation site and hear the soundtrack both on and off ride. This is a great starter coaster for guests who want to experience something more intense than a traditional non-looping coaster. 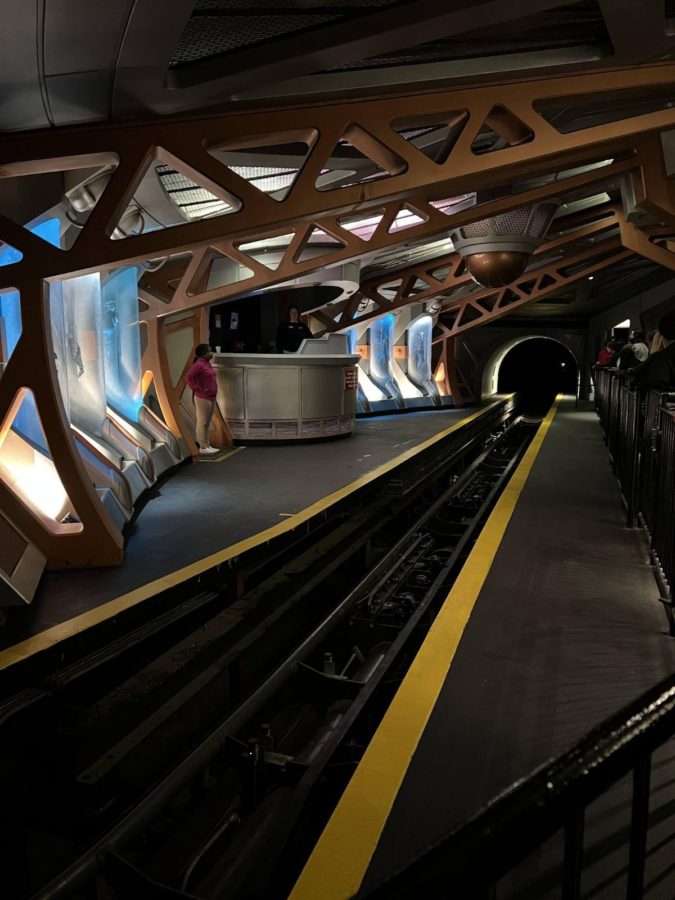 Rounding out King Dominion’s collection of Premier Rides is Flight of Fear, an indoor version of the manufacturer’s iconic “spaghetti bowl” linear induction motor (LIM) coaster. It has the most interesting queue house in the park as pictured above. I really enjoyed what this ride had to offer: a somewhat intense launch section with plenty of crazy flips and turns in the dark with some cool lighting effects for added theming. With the superior indoor coaster Verbolten at Busch Gardens Williamsburg only an hour away, Flight of Fear is a nice touch to the park to diversify its coaster lineup, a decent amount of intensity but not overwhelming. 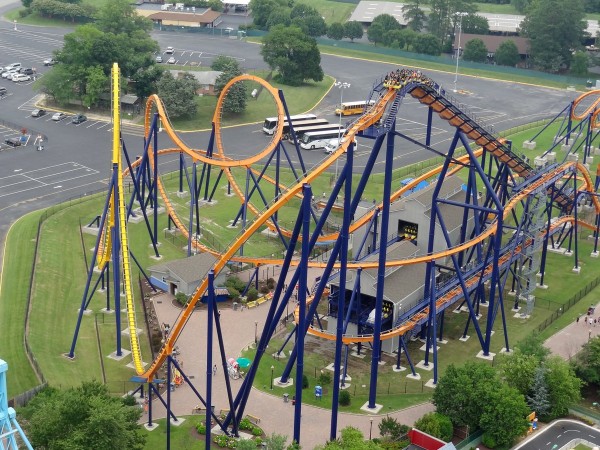 This coaster gave me everything I was expecting: a semi-smooth B&M floorless coaster with some solid inversions. However, this ride didn’t pack the same punch in comparison to others that I’ve ridden such as Medusa (Bizarro) at Six Flags Great Adventure and Kraken at SeaWorld Orlando. Dominator has a great first half with a massive vertical loop but it falters after the mid-course brake run. It would have been cool to see this ride get additional theming, such as near-misses with objects or some fog or mist. In my eyes, thematic elements can really make or break a ride experience. Dominator is a very solid ride but it doesn’t hold up in comparison to my final two coasters at Kings Dominion. 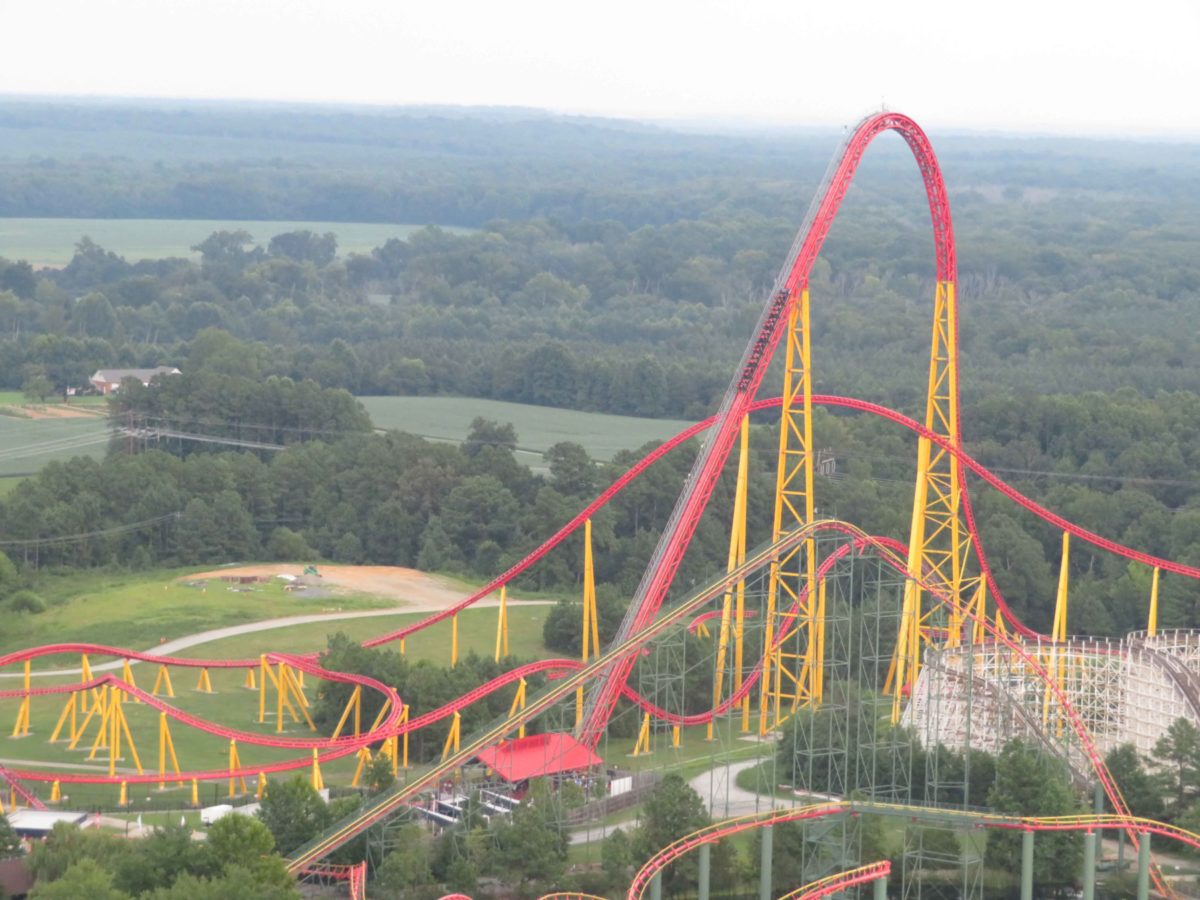 You might think I’m crazy for having I305 listed as my #2 coaster in the park, but what’s the fun in doing coaster rankings without some controversy? I305 has everything you could ever want in a coaster with its unrelenting intensity and a perfect first drop. I got five rides on this beast during my visit and after the fifth ride, I exited the station with the opinion that dare I say, this ride was a little too intense. Without fail, the turn after the first drop caused me to gray out and snappy transitions in multiple parts of the ride gave me whiplash after so many rides. Don’t get me wrong, I thoroughly enjoyed i305, but I found it difficult to re-ride without feeling some sort of pain or nausea. 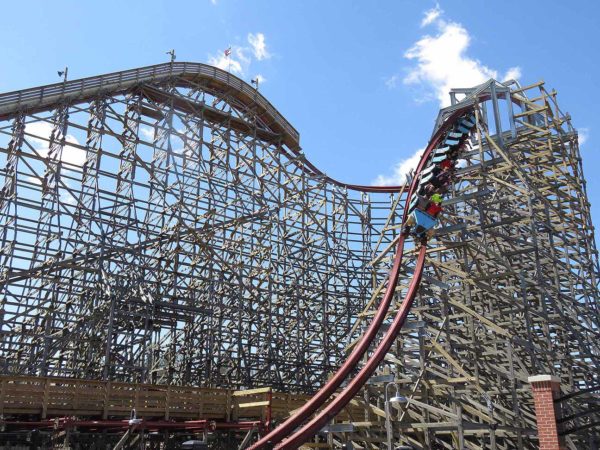 The airtime I got on this ride was like none other, especially in the back row on the triple camelback element. I was out of my seat for more than half of the ride, confirming that airtime is my favorite part of riding roller coasters. This ride truly has everything you could ask for between the endless airtime, tight turns, and inversions that deliver the best experience possible. Packing such a punch with a relatively small footprint, Twisted Timbers is an airtime machine that I love to pieces. My only complaint is I wish there was a little more speed going into the corkscrew first drop but other than that, I have no other criticisms for this terrific RMC. Going on Twisted Timbers made me even more excited to get on the behemoths that are Steel Vengeance at Cedar Point and Iron Gwazi at Busch Gardens Tampa. Without a doubt, I could argue that I305 and Twisted Timbers is the best 1-2 punch that any park in the country can offer.

Do you agree with my rankings? Would you rank I305 above Twisted Timbers? Let us know in the comments below! 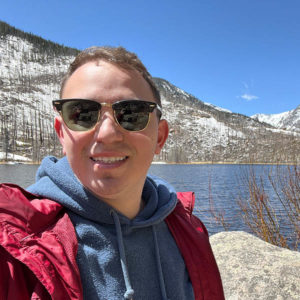