One of the best aspects of being a coaster enthusiast is finding parks that you wouldn’t have known about otherwise. During a recent visit to Long Island, New York, I happened to visit one of these parks for the first time – Adventureland in Farmingdale, N.Y. Situated on 12 acres of of NY-110, Adventureland is known for its strong tradition of creating family memories for the past 60 years. From humble beginnings in 1962, to an all-new for 2022 roller coaster, Fireball, there’s been a lot of theme park history less than 30 miles east of New York City. 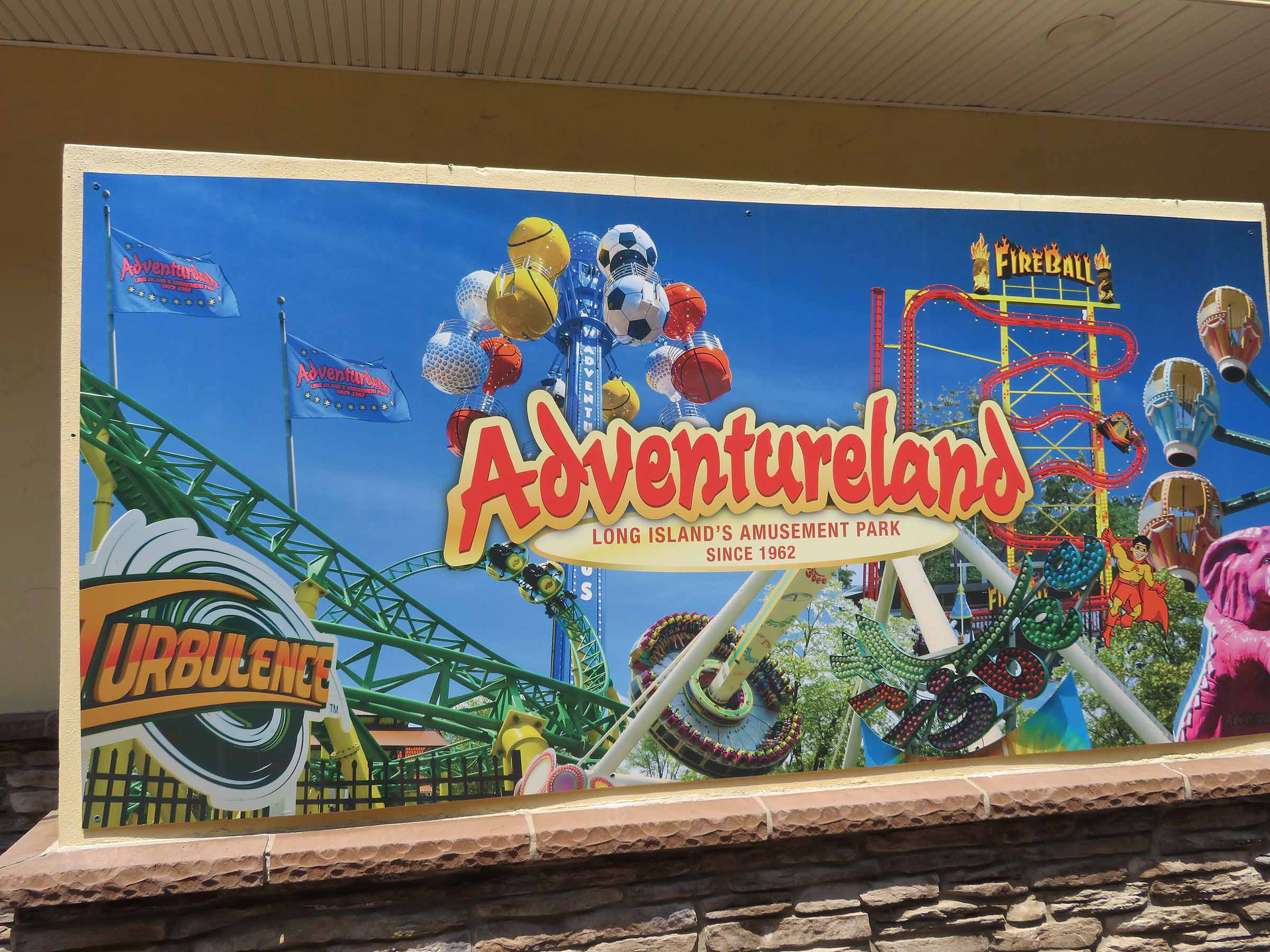 Adventureland got its start in 1962 when Alvin Cohen and Herb Budin purchased six acres of land, and installed a restaurant, arcade and mini-golf course. In line with other family-focused amusement parks in the area, Cohen and Budin also installed four rides, a carousel, a train, boats, and the park’s first roller coaster, built by the  Alan Herschell Co., named Little Dipper. Originally named Adventureland 110 Playland, the park was built at a cost of $1,000,000 (9.57 million in 2022 dollars). As other parks in the area closed their gates for good, Adventureland continued to grow, doubling in size to 12 acres when Cohen, by then the primary owner, purchased another six acres behind the park in the early 1970’s. During that decade, Adventureland added multiple attractions, including Chance Toboggan and SDC Galaxi roller coasters in 1973, increasing its ride total to 30 by the middle of the decade.

Cohen sold the park to ride importer Willy Miller in 1977, who added the park’s Antique Cars attraction, which originally operated at the 1964 World’s Fair, the following season. Miller would also shorten the park’s name from Adventureland 110 Playland to just “Adventureland.” Miller would go on to add a number of attractions to the park in his decade of ownership, keeping the park’s lineup fresh. He sold the park to Tony Gentile and Peter Amoruso in 1987, and Adventureland would see its next major growth period. Despite a small footprint, new attractions are constantly rotated in for older attractions at Adventureland, and have been since the 1990s. In total, Wikipedia lists more than 50 “former” rides and attractions at the park. Adventureland is still co-owned by the Gentile Family, as Tony’s son, Steven, currently serves as President and co-owner of the park, following his father’s passing in 2013. 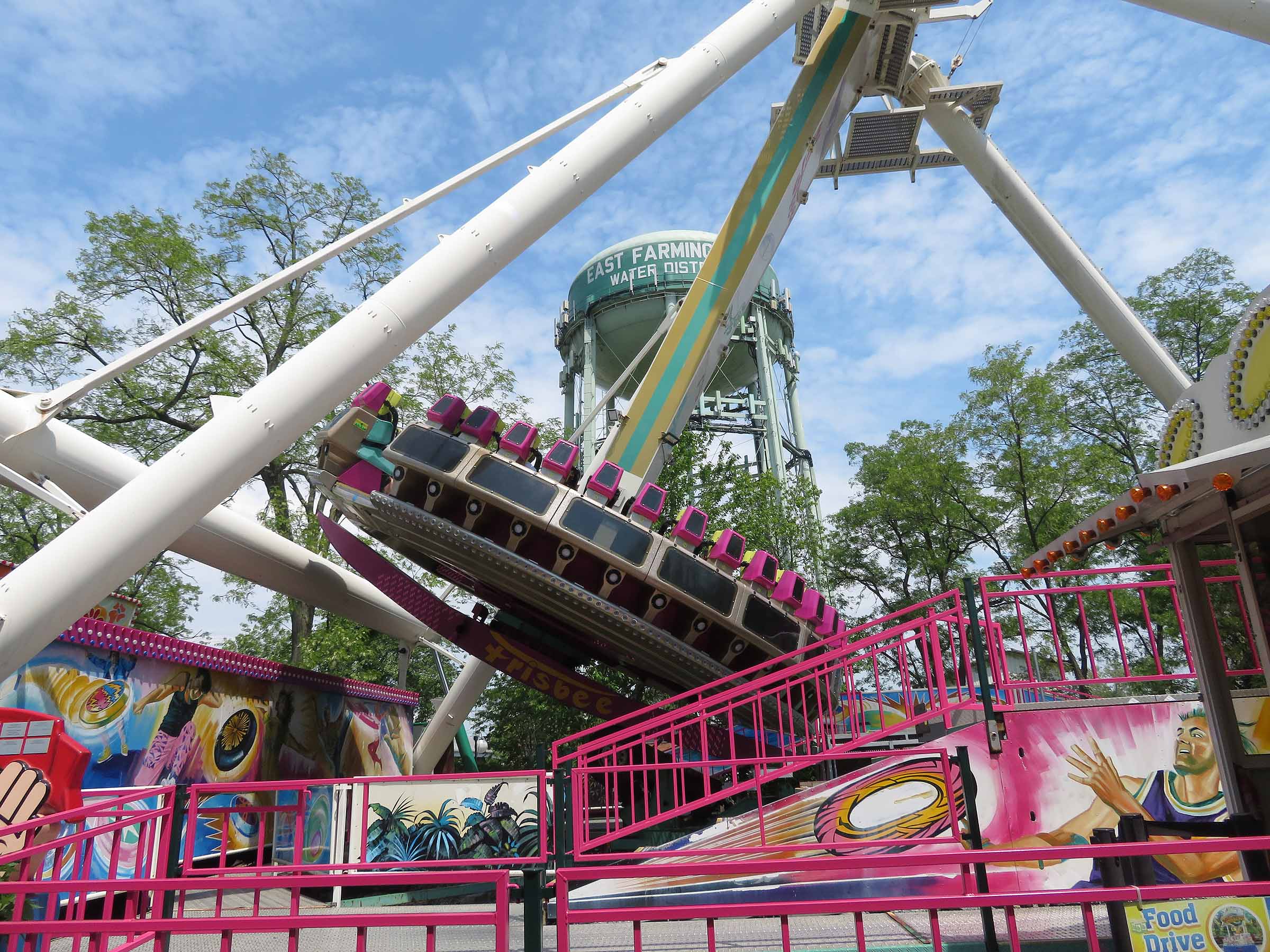 Among the park’s current ride line up are six thrill rides, including several classic amusement park staples including a Musik Express, Pirate Ship, and Wave Swinger, seven “family” rides, including the original train, eleven “kiddie” rides, and three water rides. While many of the park’s nearly 40 attractions are geared towards a younger audience, Adventureland does also feature three roller coaster credits for those who find themselves in a “credit counting” mood. 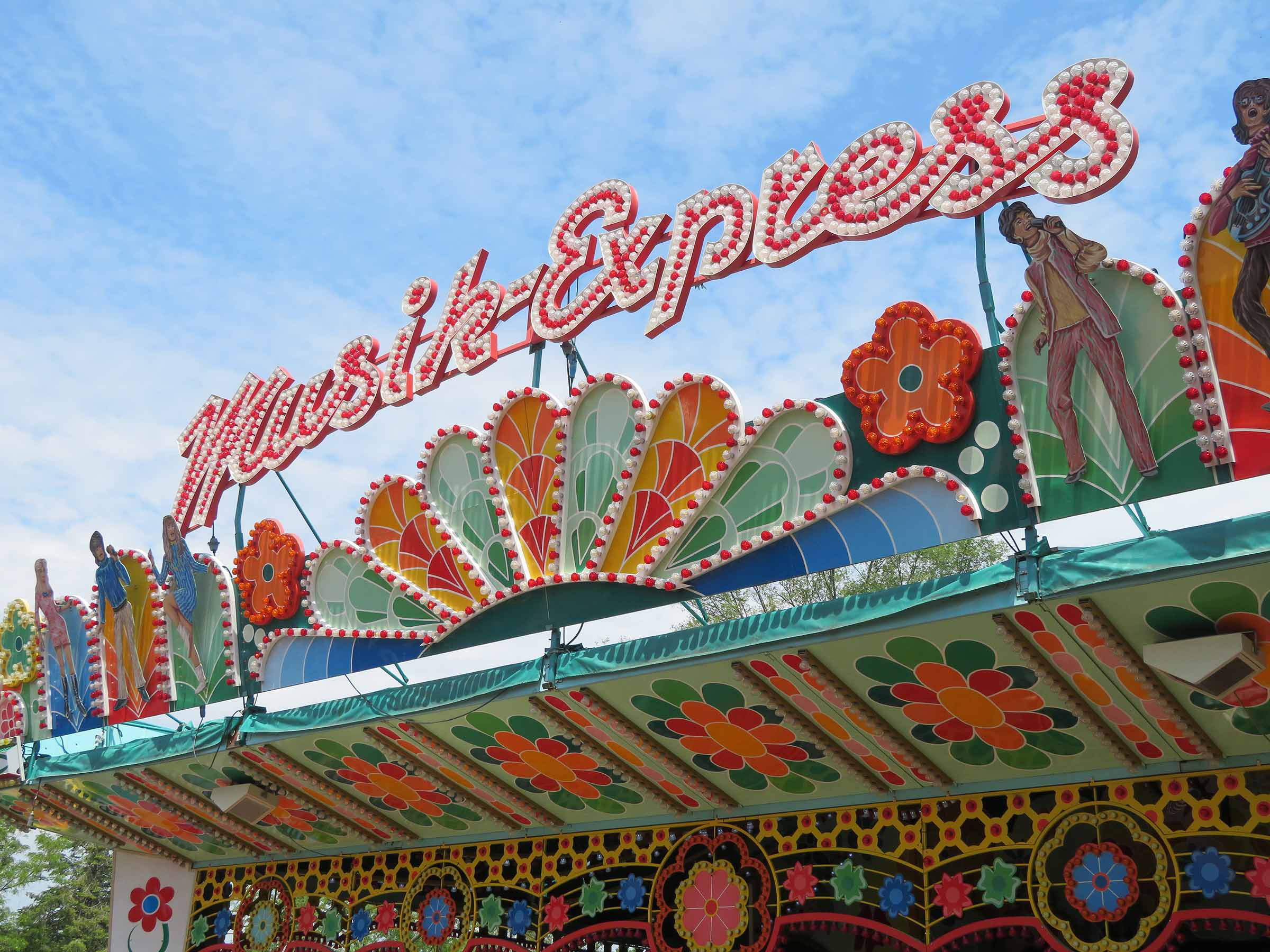 Upon arriving at Adventureland, the first thing you’ll notice (even prior to entering the park) is the pricing structure. While many amusement parks will charge more for an “adult” ticket than a “kids” ticket, the opposite is true at Adventureland. As of this writing, it’s currently $10 cheaper for someone older than 25 to visit the park than someone who is aged 2-24. Not only can you rent a car without a surcharge, but you get a discount on an Adventureland ticket! (Though it does make a ton of sense when you realize that most of the attractions are geared towards those in the lower age bracket, and the adult discount is likely to encourage chaperones to attend.) As is typically the case, you do get a bit of a discount when buying online in advance. 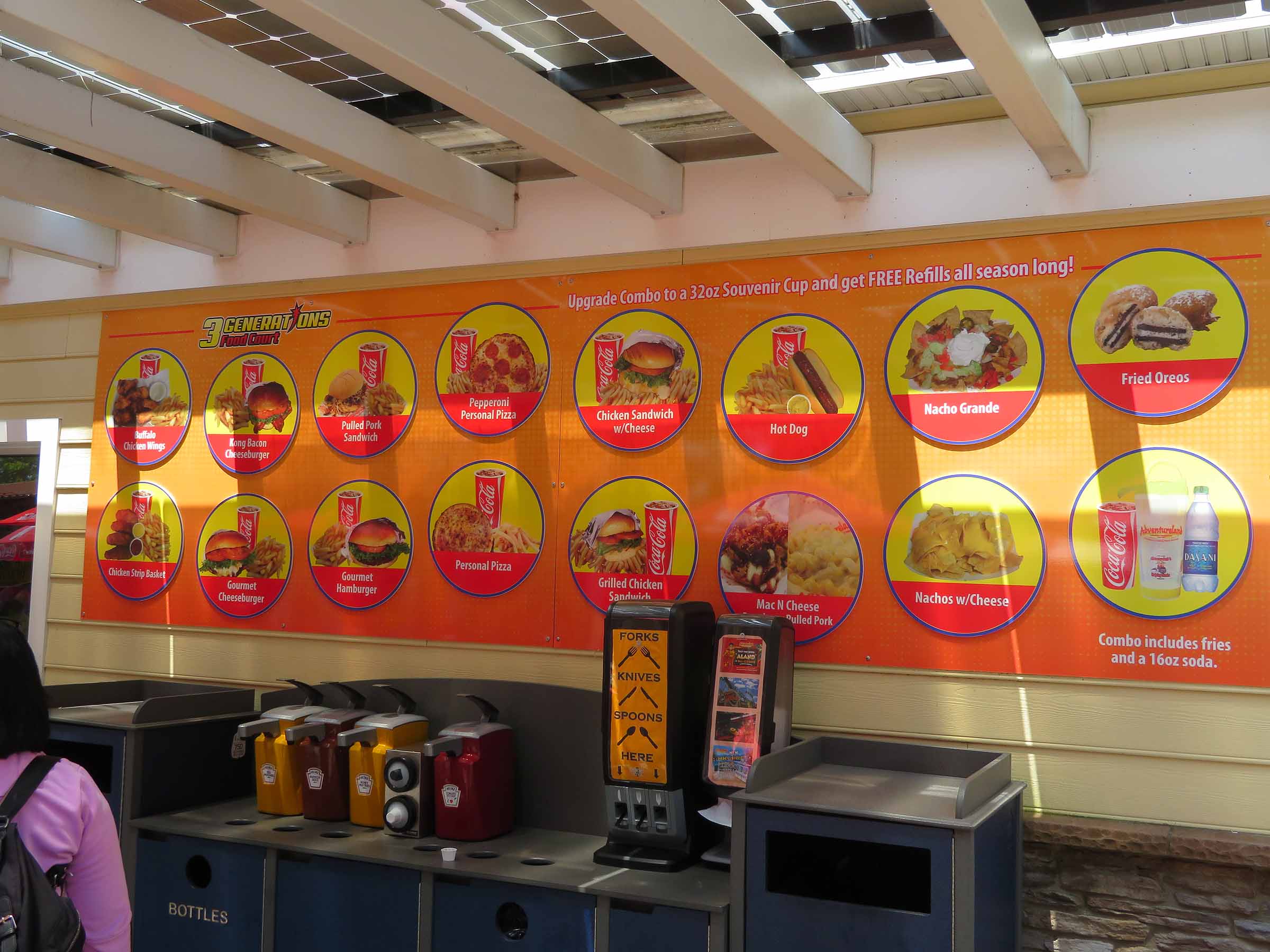 Upon entering Adventureland, the second thing you notice is the park’s size. You’re given a choice when you enter, you can head to the left, towards an area of the park that’s best described as a “cul de sac” where you can find the Antique Cars, Pirate Ship, and Log Flume, named Adventure Falls. Or you can head to the right, where the rest of the park awaits. The first attraction you come to by turning right is the “3 Generations Food Court,” (presumably named for the three ownership periods in park history) which serves a wide variety of fairly standard theme park fare. There’s also the “3 Generations Sweet Shop,” which sold candy, ice cream, and other novelties. (We didn’t eat during our visit.) 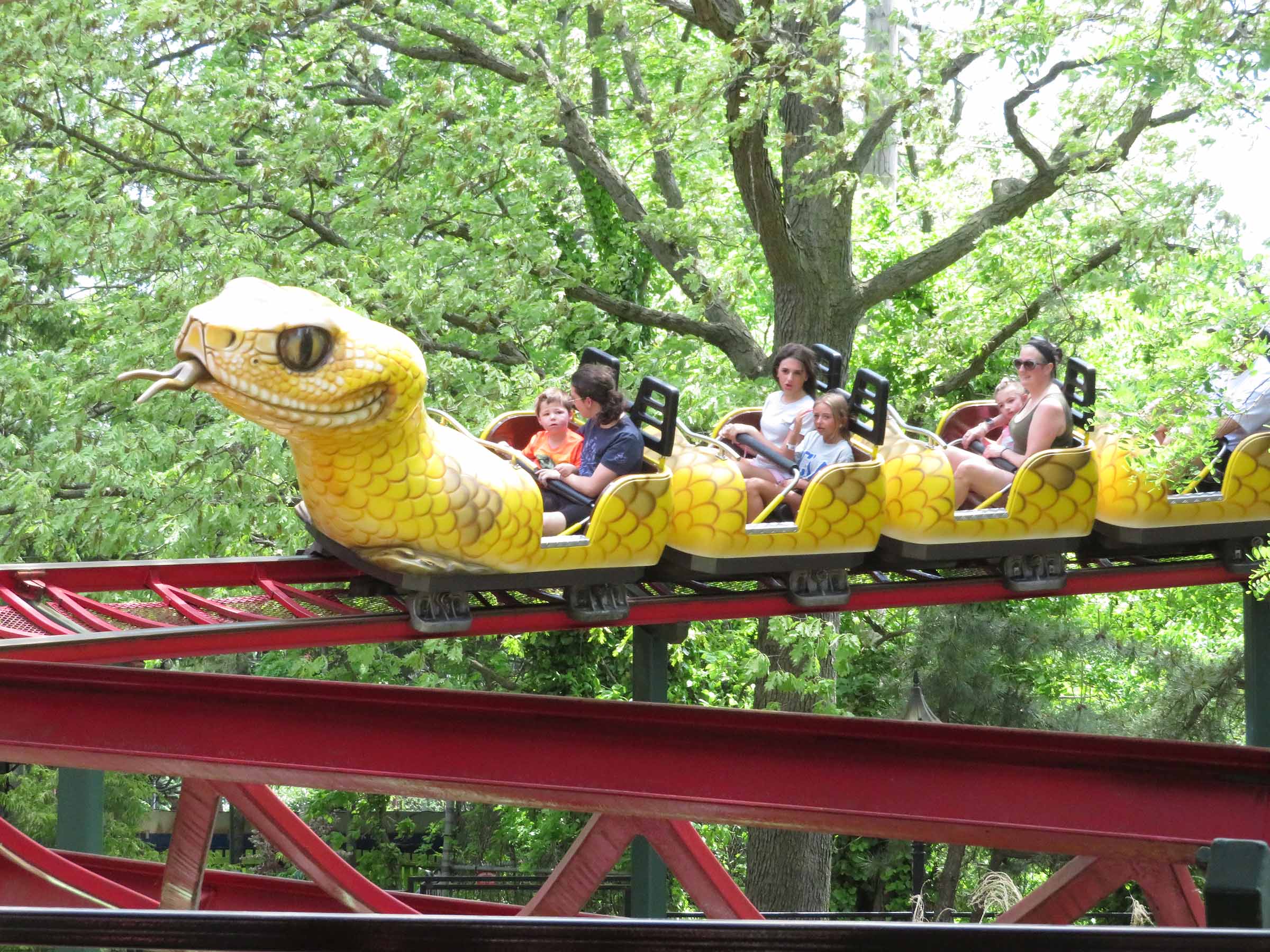 You’ll also come to the park’s first, and oldest operating, roller coaster credit, Rattlesnake. A Tivoli model from Zierer, the figure eight coaster is a fun ride for families and younger coaster enthusiasts, perfect for the park’s target audience. When the coaster opened in 2000, it was known as Paul Bunyan Express, before assuming the name “Ladybug” from 2001-2018. (The trains 100% resembled the ladybug coaster from Roller Coaster Tycoon — you absolutely know the one.) Presumably, the coaster received new trains in 2019, and received its current name to reflect the snake-themed trains. 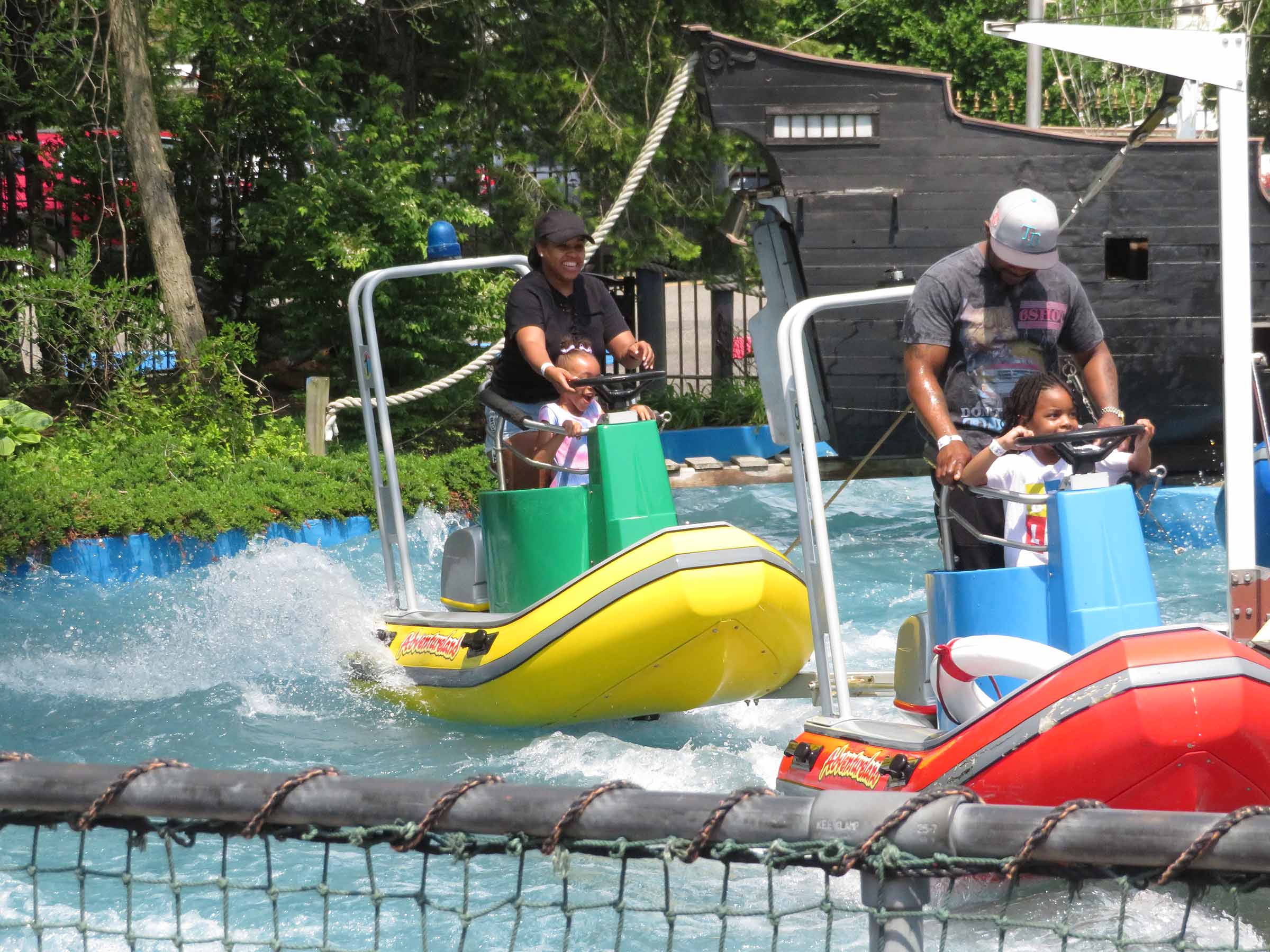 When walking the midways of Adventureland, it’s impressive to see how much is crammed into such a tight space without everything feeling like it’s completely on top of one another! On the right side of the pathway, attractions are almost neatly lined up, one after another. Across from Rattlesnake, you have the suspended dark ride, Mystery Mansion (no single riders, so didn’t get to ride — looked fun though!), followed by a drop tower, carnival games, a Frisbee, Musik Express, and the Safety Swim Rescue Boats. (The Rescue Boats also looked like a ton of fun, and you were certain to get soaking wet on them.) 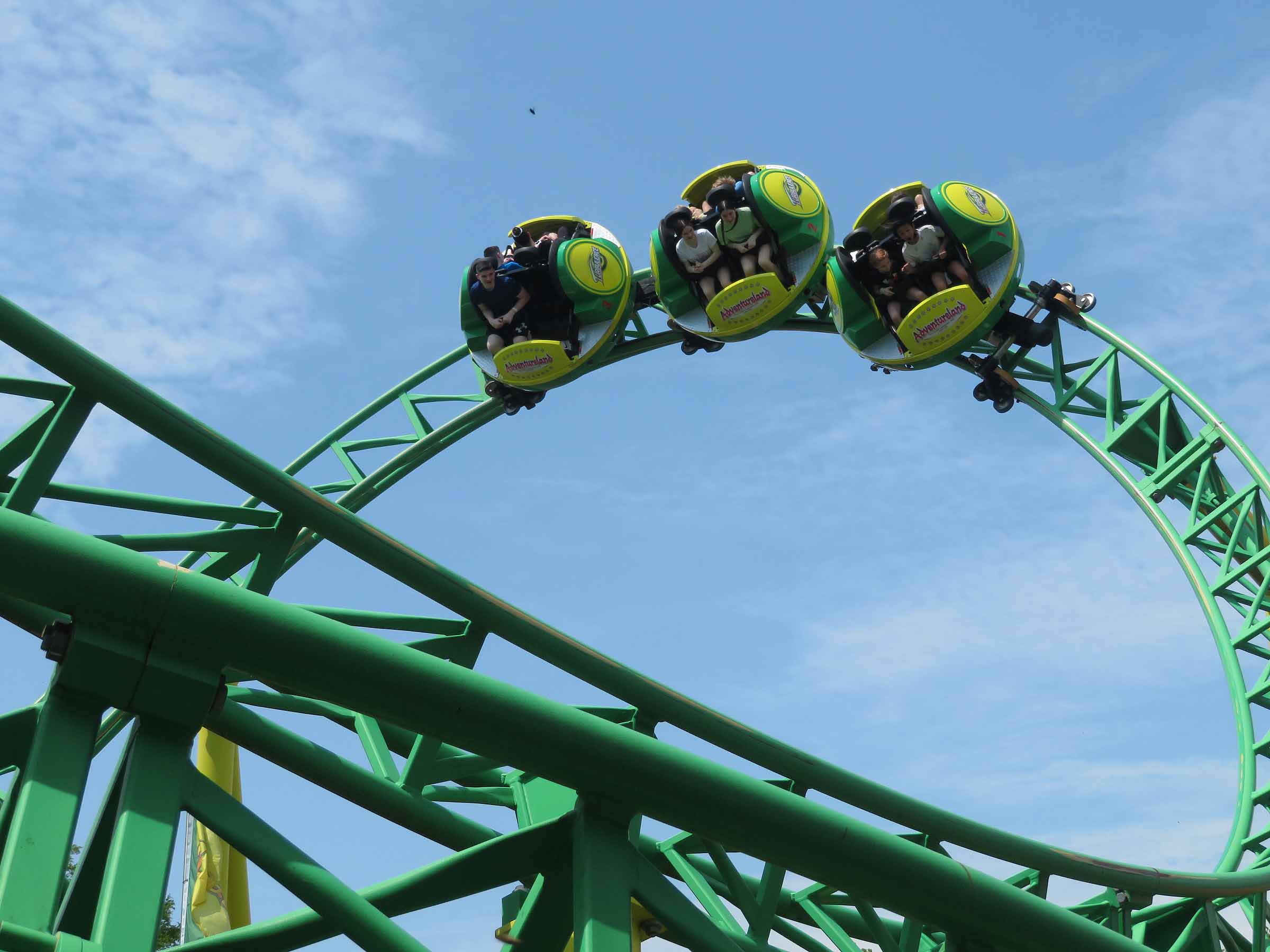 Across the midway from the perfectly straight row of attractions was Turbulence, a spinning coaster from MACK Rides. Opened in 2015, Turbulence replaced Hurricane (which now operates at Race City PCB in Panama City Beach under the same name), which itself replaced the Galaxi Coaster that opened in 1973. Turbulence’s bright green track and yellow supports really pops against the trees behind it, and even though the coaster is less than 1,300′ long and stands just 55′ high, it packs a serious punch for thrill seekers. As soon as the trains released from the lift hill, the spinning was constant, ensuring you’ll likely never have the same ride experience twice, depending on how the cars are weighted. 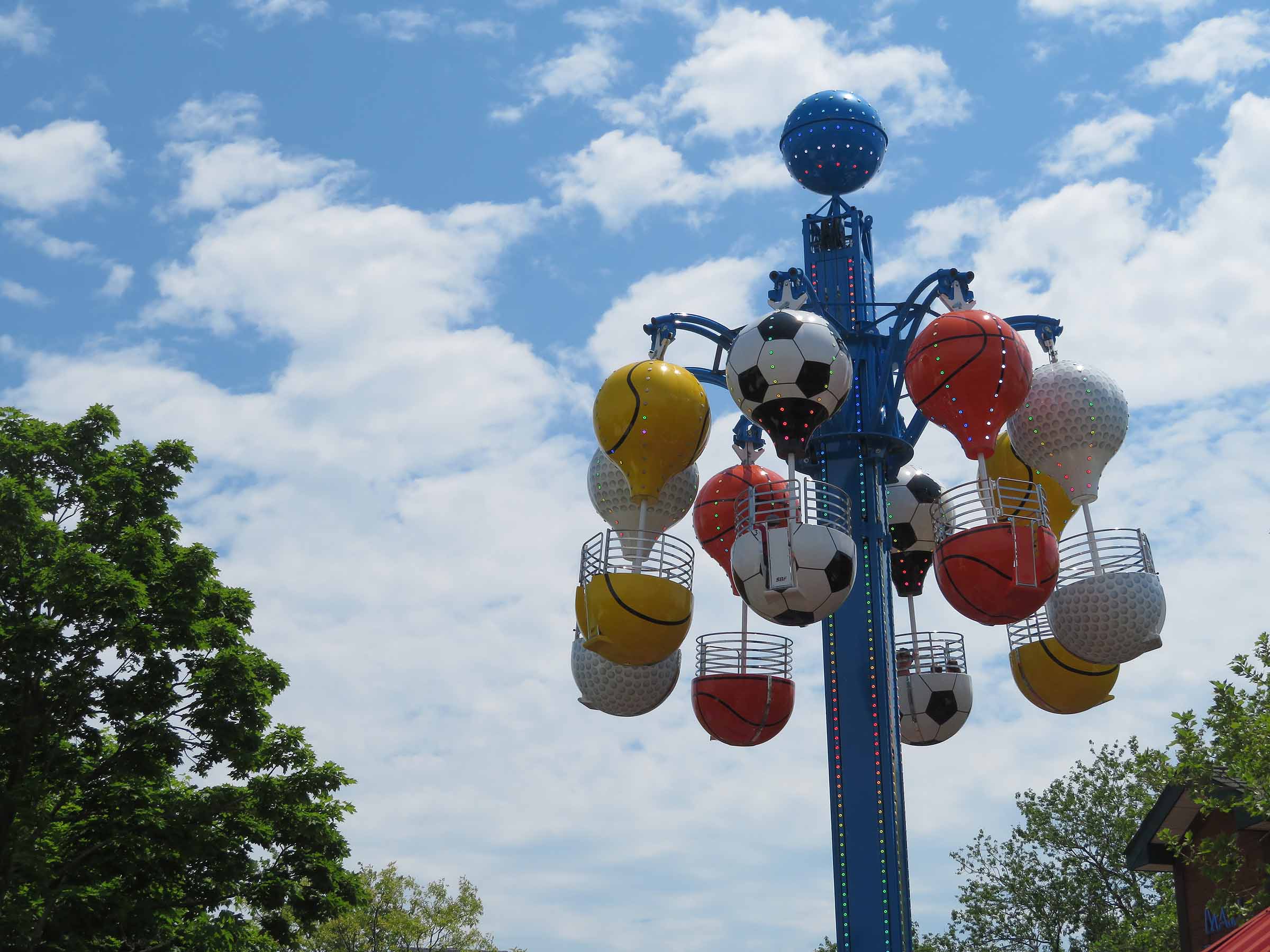 Venturing further into the park, the midway begins to open up, and a number of kiddie rides are ahead. In the back “section” of the park, there are approximately 15 attractions neatly tucked into a very tight space. Many of these attractions are geared towards younger children and families, including the Sports Tower, Wave Swinger, Balloon Ferris Wheel, Viking Voyage, Tea Cups and Alfie Express (to name just a few.) The park’s 60-year-old train encircles the perimeter of the park, and takes approximately 11 minutes from start to finish. There is a ton for families to do at Adventureland. 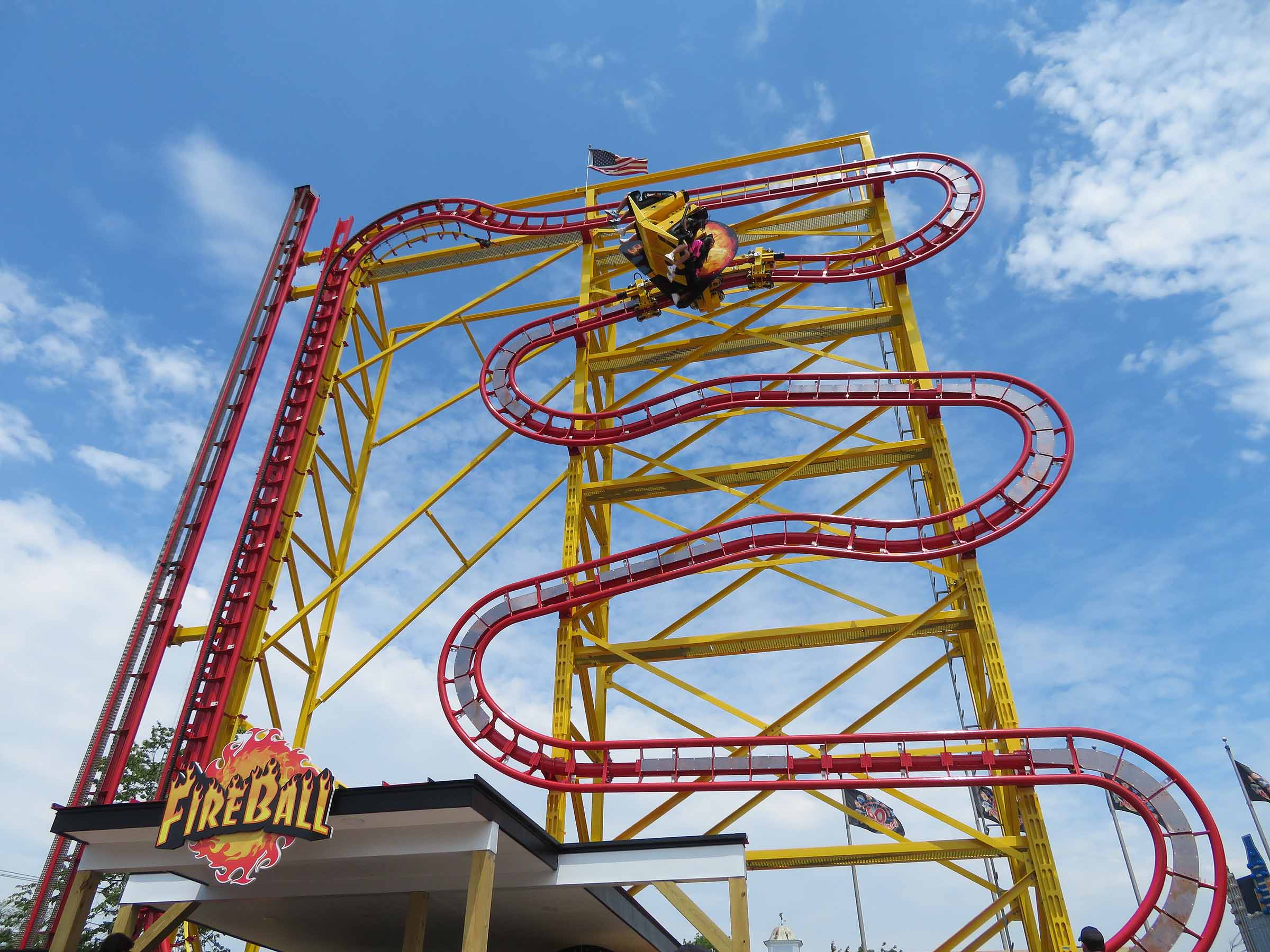 One of these family-friendly attractions is actually the park’s newest attraction, Fireball. A first of its kind attraction in the United States from Ride Engineers Switzerland, Fireball is neatly tucked into what’s considered the “back corner” of the park from the main entrance, but at 69′ tall, looms over the passing motorists on Highway 110. Seated in four passenger cars situated on the side of the structure, riders ascend a vertical lift, and zig-zag their way down 300′ of track as the vehicle rocks back and forth. For coaster enthusiasts who can’t visualize the sensation, picture a 4-D Free Spin, without the inversions, and half the passengers, only on one side of the track. Fireball was in a soft opening during our visit, and will have a grand opening later in 2022. 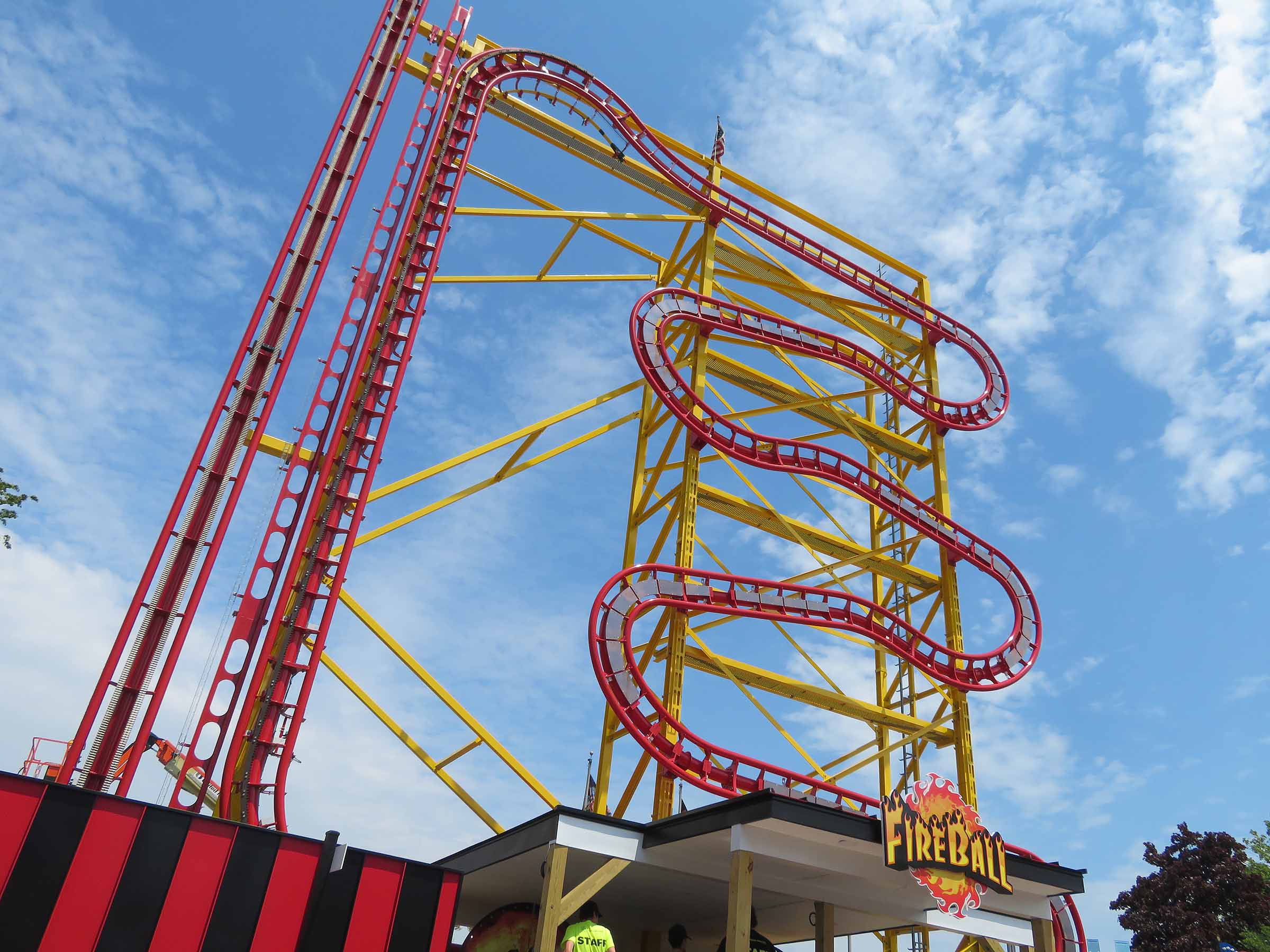 While we didn’t get to ride Fireball during our visit (body dimensions, it happens as a larger coaster enthusiast), many guests seemed to be enjoying their rides. The open air trains, couple with a simple over-the-head lap bar restraint, likely resulted in some feelings of unease, especially for the targeted market of children and families. I heard more than one uneasy parent tell their child that they “didn’t want to get stuck upside down all the way up there,” despite “up there being ~60′ in the air, and the coaster never actually going upside down.)

Not only does @AdventurelandLI have their own beer, but their in park bar actually has its own merch! pic.twitter.com/blxMp003nF

Outside of attractions, we know there is a certain subset of theme park fan who appreciates an adult beverage while at the park. Adventureland has its own bar, Tony’s Tavern, named for the late Gentile family patriarch, which serves up cold beer and hard seltzers to those of age. Of note, Adventureland actually has its own exclusive beer, the A-Land Honey Ale, which is only available at Tony’s Tavern. 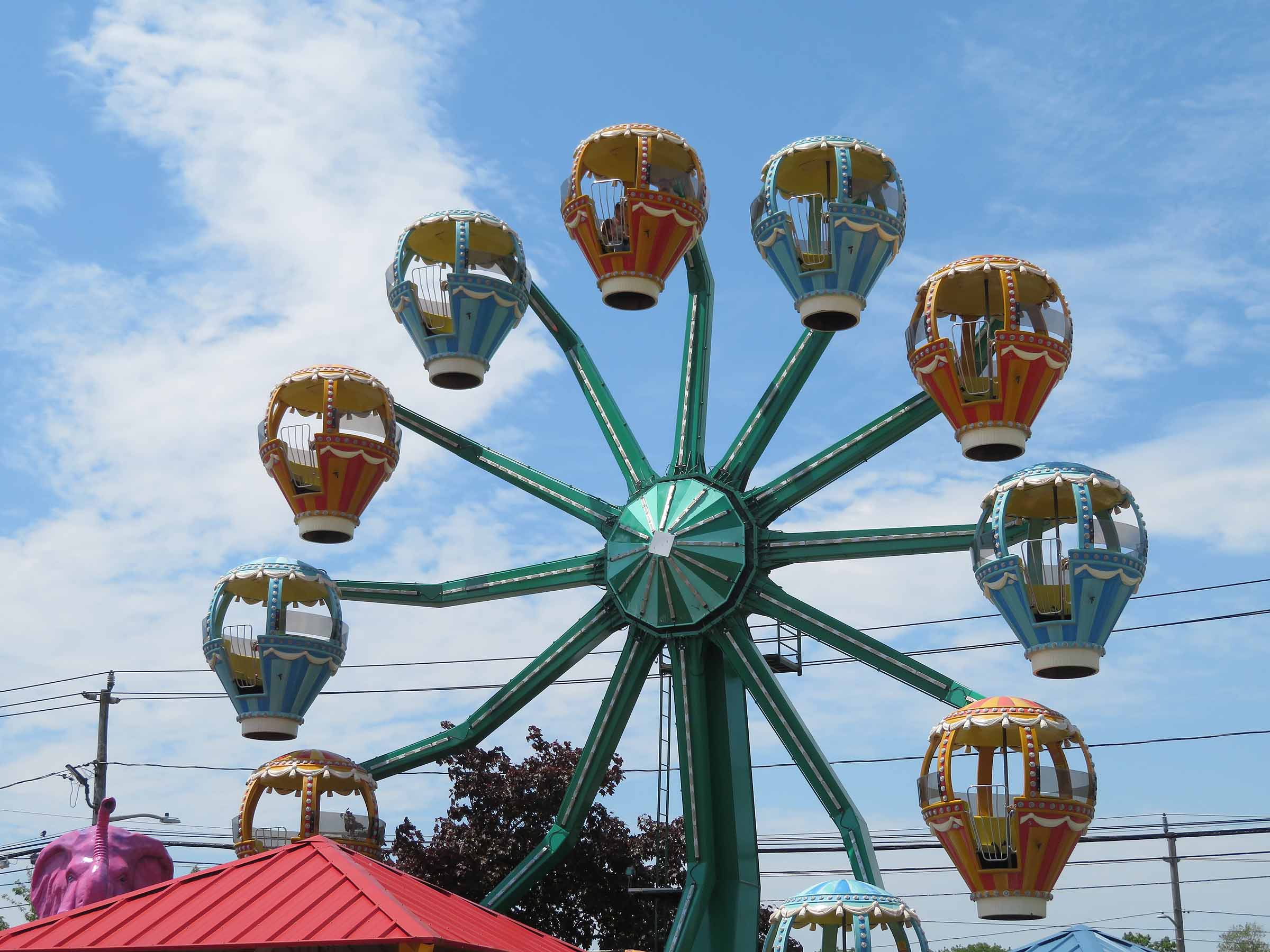 If you’ve skimmed through all of the words and have come down looking for a final summary and verdict on Adventureland, you’re in luck. Here it is. In writing this, I, as a childless 30-something, realize than I’m not the target market for Adventureland. I was visiting to check a few coasters (wish it was three, but it was two.) off of the ole’ credit list. I will say this. Adventureland had a charm that you can almost never find at a larger park. While the park is celebrating its 60th anniversary in 2022, it wasn’t really showing any signs of tiredness or age. Yes, there’s a certain level of (appreciated) kitsch, with the giant fiberglass animal and pirate sculptures and references throughout Adventureland to the park’s mascot, Alfie. Everything was clean and appeared at least somewhat freshly painted. The park was well-staffed with friendly employees.

Long Island certainly isn’t known for being a major amusement park destination. But if you find yourself on Long Island and looking for thrills, or as the park’s slogan says, looking to create family memories, look no further than Adventureland. 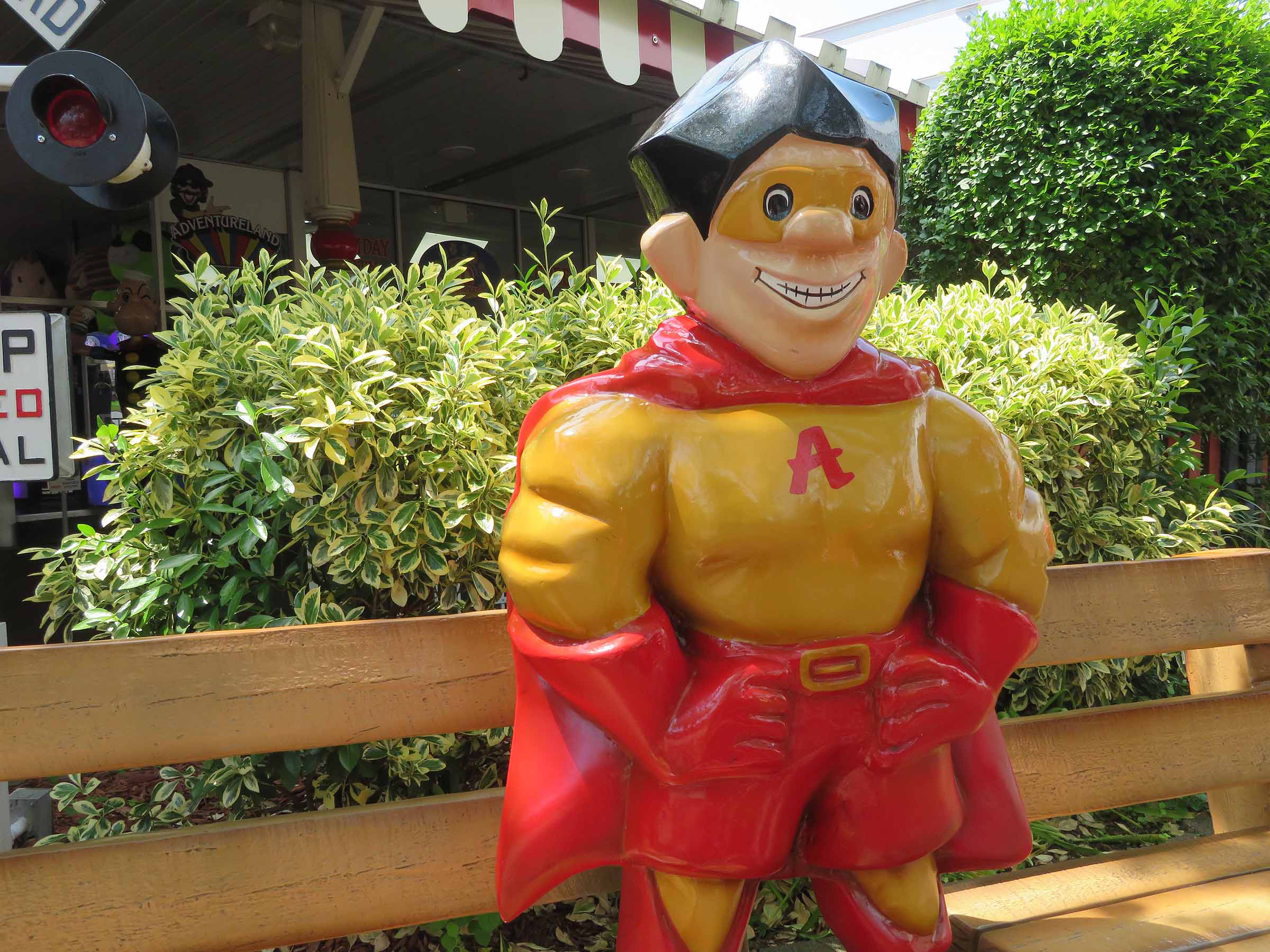