Happy Star Wars Day and May the Fourth be with you!

This is part three (Episode III) of my review series covering Star Wars: Galaxy’s Edge at Walt Disney World. In this article, I will be covering the Millennium Falcon: Smuggler’s Run attraction. If you missed the first article detailing the overview of the land, check that out here. The second article covers the droid building experience at Droid Depot. You can also check out this episode of The Coaster101 Podcast where we take a deep dive into the land, and rides in particular, with Hunter from Theme Park Hunting. Now, let’s punch it! 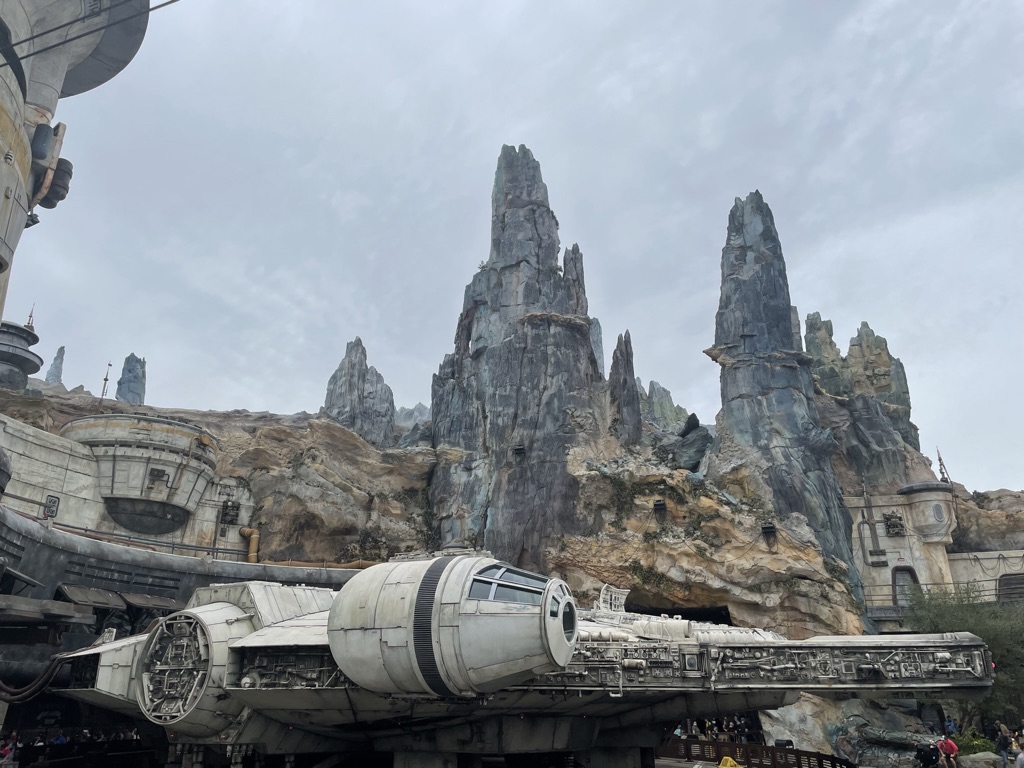 The Millennium Falcon is without a doubt the most recognizable fictional vehicle of all time, so I can only assume that there was a great deal of pressure on the Imagineers to get this attraction right, and in my opinion, they nailed it. Millennium Falcon: Smuggler’s Run is described by Disney as a “thrilling interactive smuggling mission,” which doesn’t give that much information about the ride, but this attraction is a high-tech flight simulator with three different positions. Smuggler’s Run is a unique attraction because it is a collaborative ride experience, the teamwork of the riders could lead to success or failure on the mission. The positions include the two pilots, one controlling the side-to-side motion, and one controlling the up and down movements, two gunners, and two engineers. These positions are given out randomly, but each time I rode I asked to be a pilot and the crew members were happy to accommodate my request. But we’re getting ahead of ourselves here, let’s start at the very beginning. 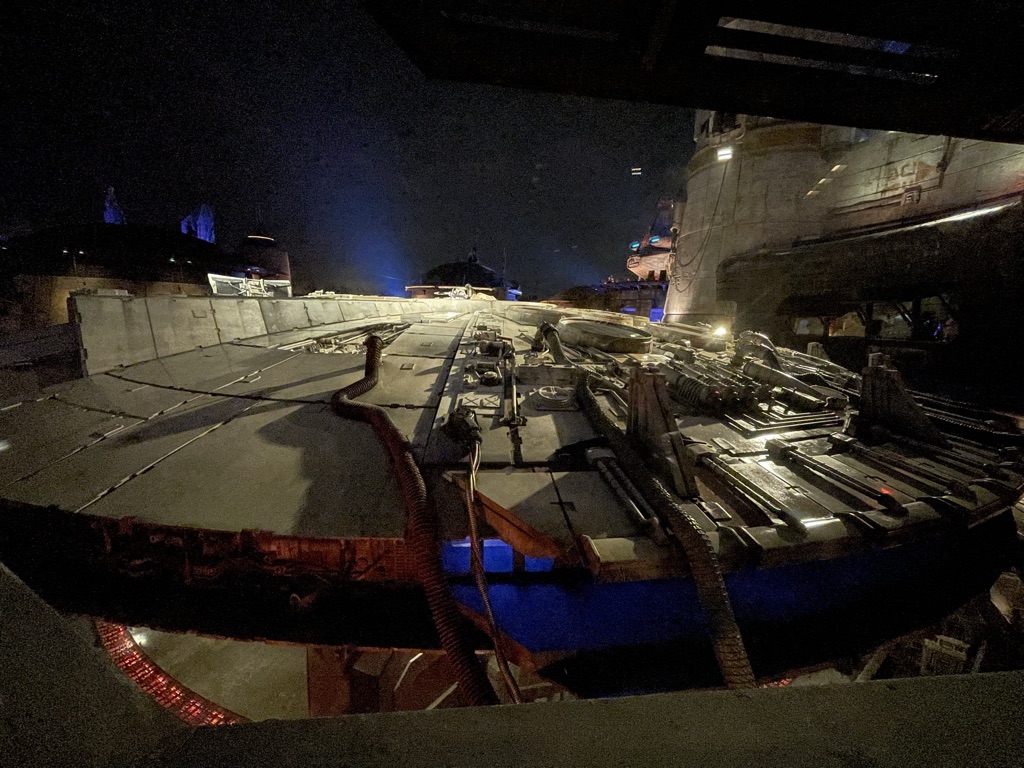 Walking up the Millennium Falcon is a truly picturesque moment, and Galaxy’s Edge has been designed in a way that no matter which direction you approach the ship, you will get a jaw-dropping reveal when the Falcon first comes into view. I almost didn’t notice it at first, I was so busy taking in the scenery (and enjoying my Ronto Wrap) that I looked up and was surprised at what I was seeing. The ship is absolutely massive, and even having seen it in all sorts of Star Wars media, I was taken aback at the sheer size of it. 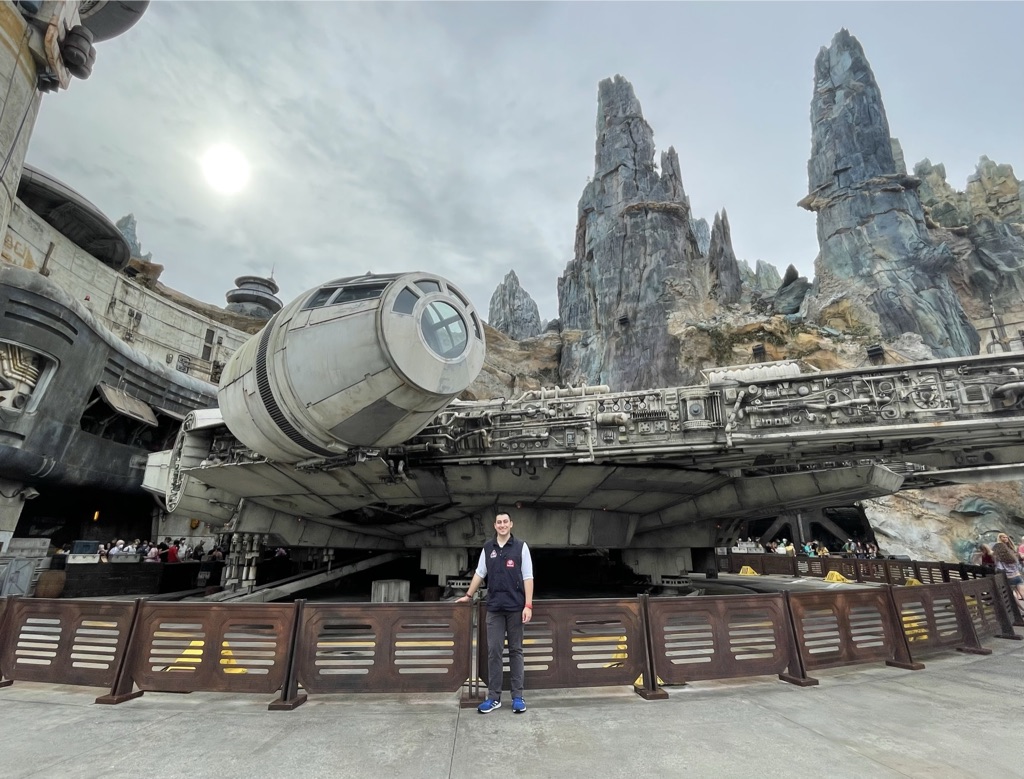 Something I really appreciate about the dedication to realism in Galaxy’s Edge is that there are no ride signs. The directional signs leading up to the ride only say “Spaceport” with the Ohnaka Transport Solutions logo featuring the Falcon, and the ride entrance is just a small doorway next to the ship, you might even miss it if not for the groups of people entering in. 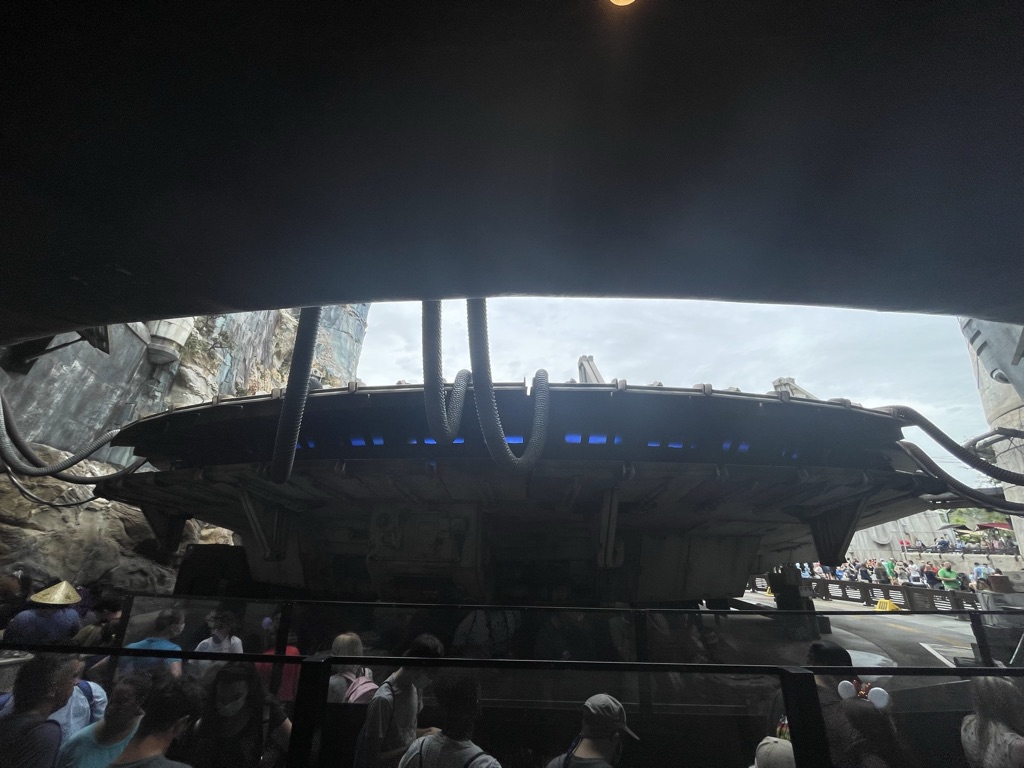 Once you’re past the entrance, you walk through the long queue, and personally, it’s my favorite queue for any theme park attraction. It is hyper-realistic, and every step feels like you are in an active spaceship maintenance bay. There are so many great details: ambient sounds and noises, the theming packed into every little corner (including some great references and easter eggs), and the massive engine inside the shop that lights up and occasionally powers up. When standing outside the Falcon, you can even use the Play Disney Parks app to hack the ship and cause steam to shoot out of the vents on the underside of the Falcon. 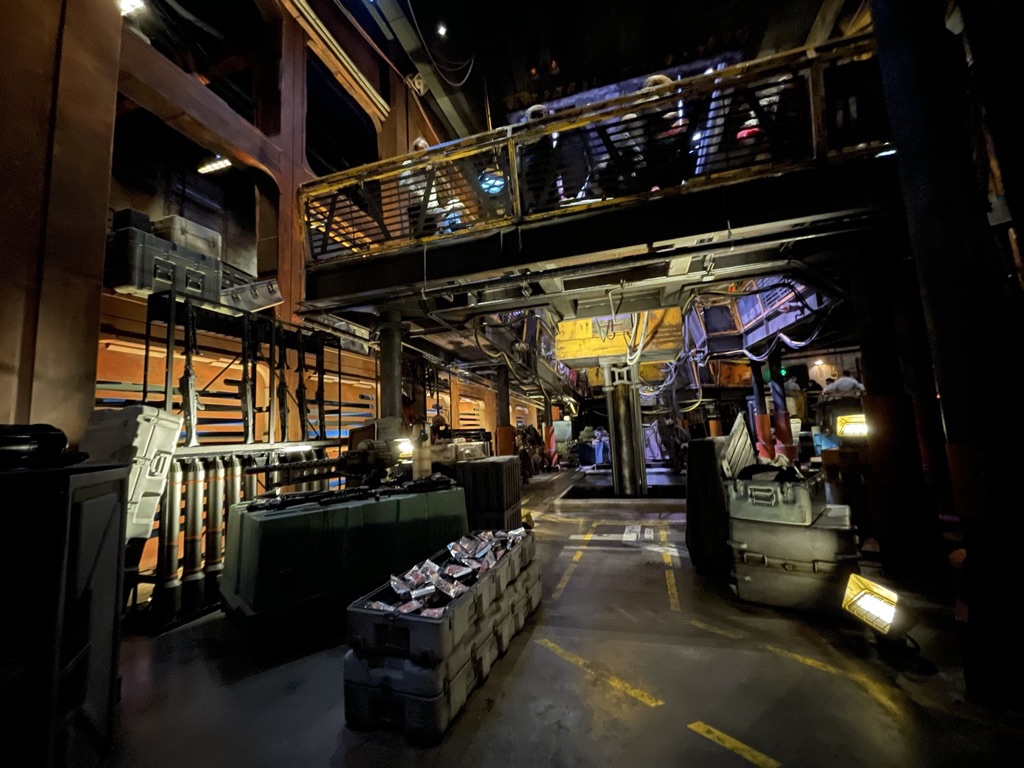 After this, you will gather in the pre-show room and get a mission briefing from Hondo Ohnaka, one of my all-time favorite Star Wars characters. Casual fans may assume that Hondo is an original character created for the attraction, but he is actually a much-established presence in the animated Star Wars television shows and books. Hondo is an incredibly impressive animatronic, and is one of Disney Imagineering’s most realistic and lifelike creations. 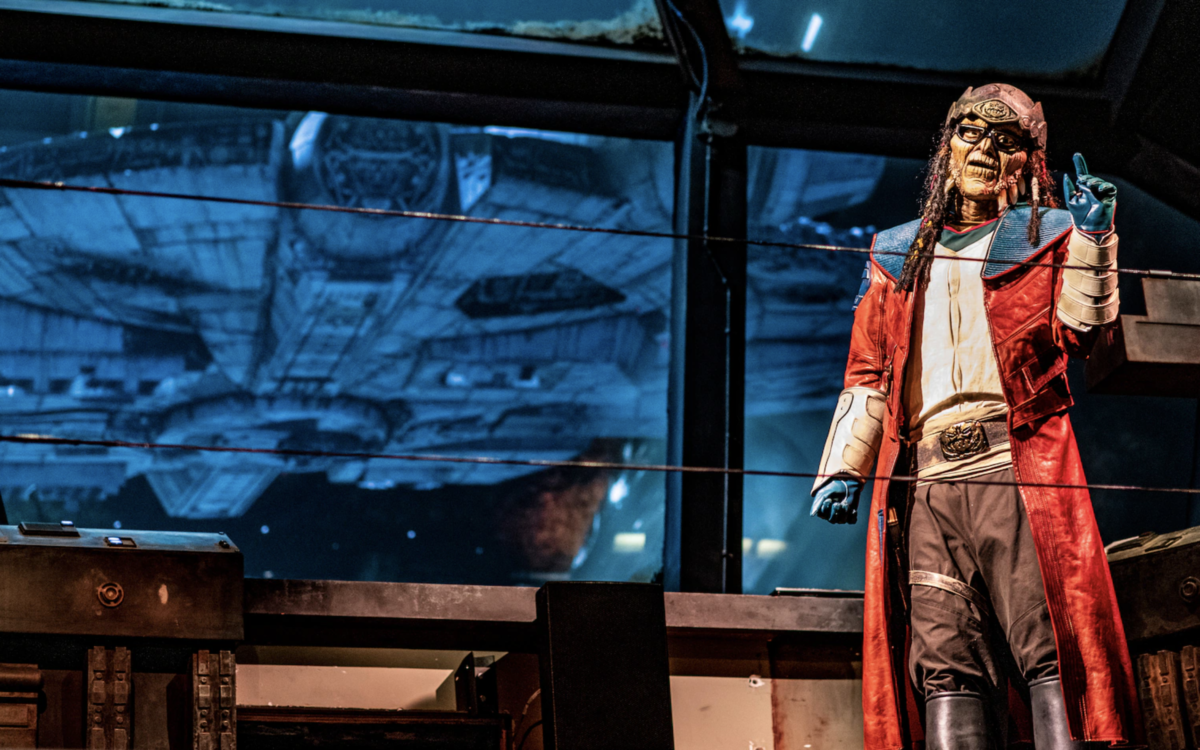 Hondo tells his newly recruited crew members (you) about the mission to steal coaxium for the Resistance and introduces you to Chewbacca and the Millennium Falcon before sending you on your way. Then, as you descend the boarding ramp to the Falcon itself, the metal floor even creaks and bends as if you were walking on a real jetway. Small details like this are what truly come together to fully immerse you inside the experience. 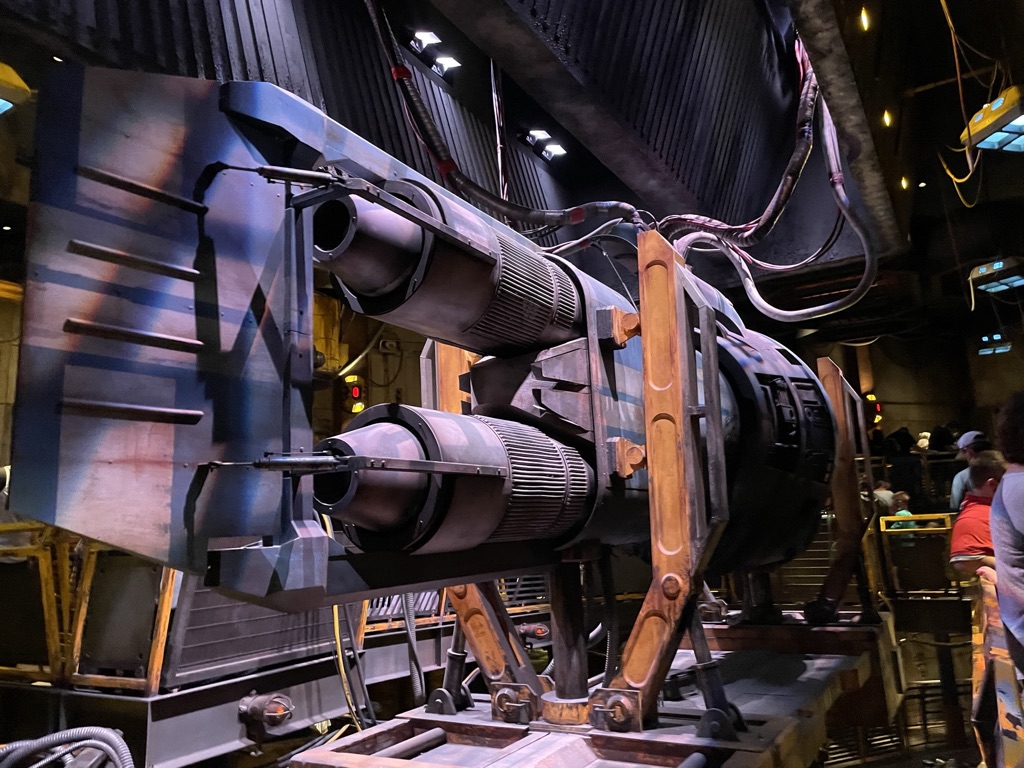 What comes next may be the best part of the ride for some Star Wars fans, and the ride hasn’t even begun. The moment that you step foot inside the Millennium Falcon and see that famous “chess room” is an all-time great theme park moment for me. Even if someone only has a limited knowledge of Star Wars, they are going to understand they are in an iconic location. 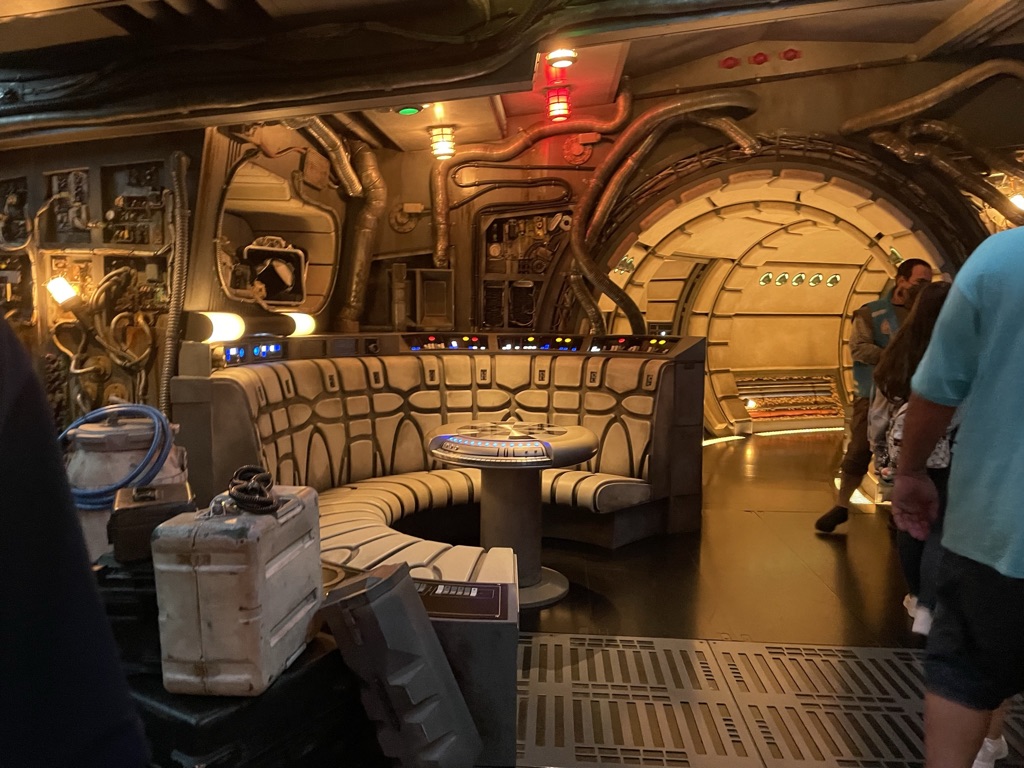 After a few moments of admiring the scenery of the Falcon’s interior and snapping a few photos to commemorate, riders are ushered into the cockpit of the ship in another surreal moment for fans. Before entering the cockpit, there is a brief video of Hondo providing more context, and the fascinating part is that Hondo knows if there are new and/or returning guests in the group, and will change what he says based on this. Recently, guests of the Star Wars Galactic Starcruiser hotel experience have reported that Hondo knows they are staying aboard the Halcyon, calling them “guests of that fancy ship in orbit.” 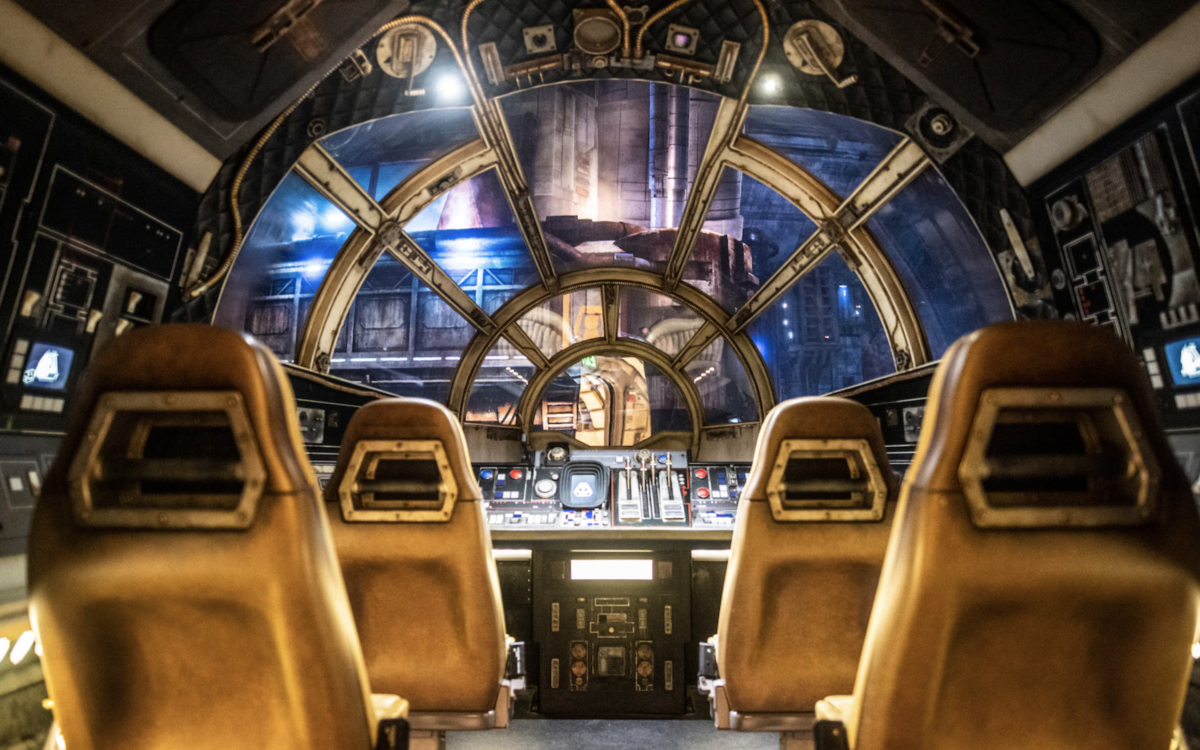 Once seated in the cockpit, you will test out your position by pushing some buttons to prime the ship, and then it’s time for takeoff. The screens on this attraction are among the most realistic I have ever seen, and the fact that they adapt to the pilots’ every move is even more impressive. Once the Falcon has risen above the spires of Black Spire Outpost and approaches orbit, the time has come for the right pilot to pull the lever to bring the Falcon into hyperspace. I am not exaggerating when I say that the first time I got to perform this task was one of the greatest moments of my life. It may sound like hyperbole, but to finally be in control of this incredibly iconic moment that I have been watching on screen for years was incredibly fulfilling and still surreal to this day. And if you or your copilot don’t say “punch it!” as you pull the lever, what are you even doing? 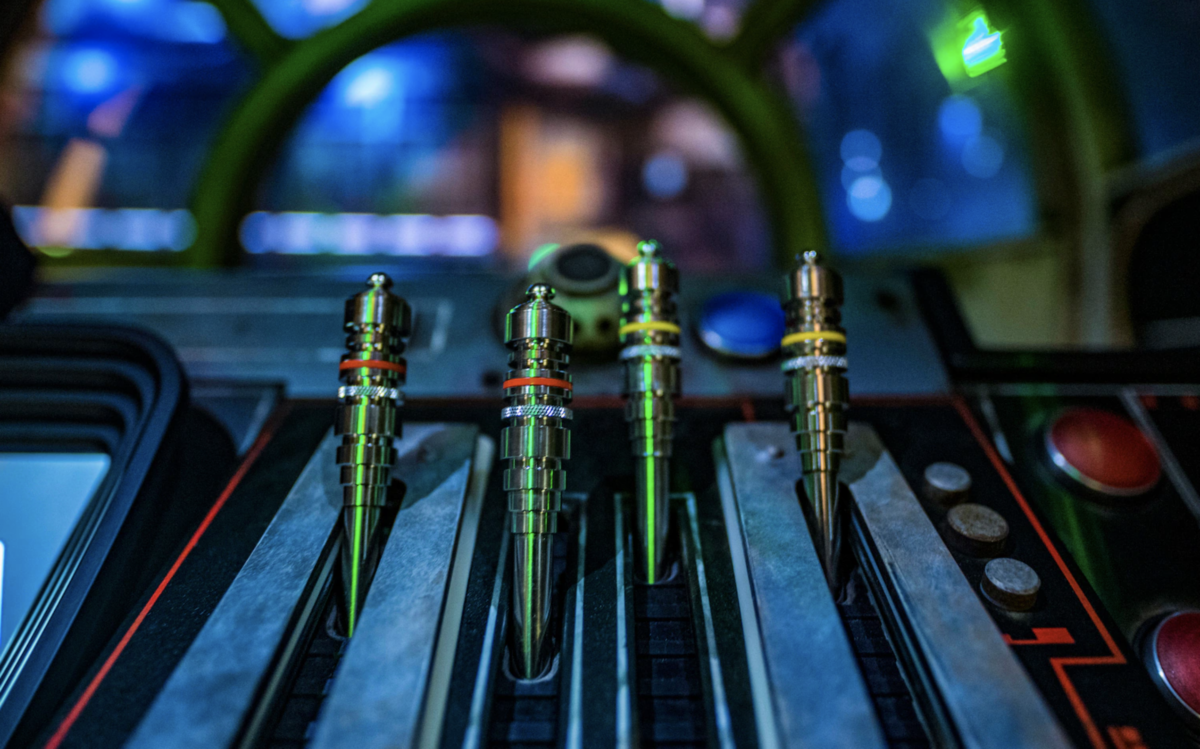 Then, the mission is in high gear as the pilots steer the ship, the gunners ward off incoming TIE Fighters, and the Engineers fix any damage inflicted on the ship (most likely from your own pilots). I can’t speak for the other two positions since I only ride as the pilot, but if you want a less active role in the mission, or just want to sit back and watch, these are the positions to try. I’m sure they aren’t as fun as being a pilot, but some people may just want to ride and observe. 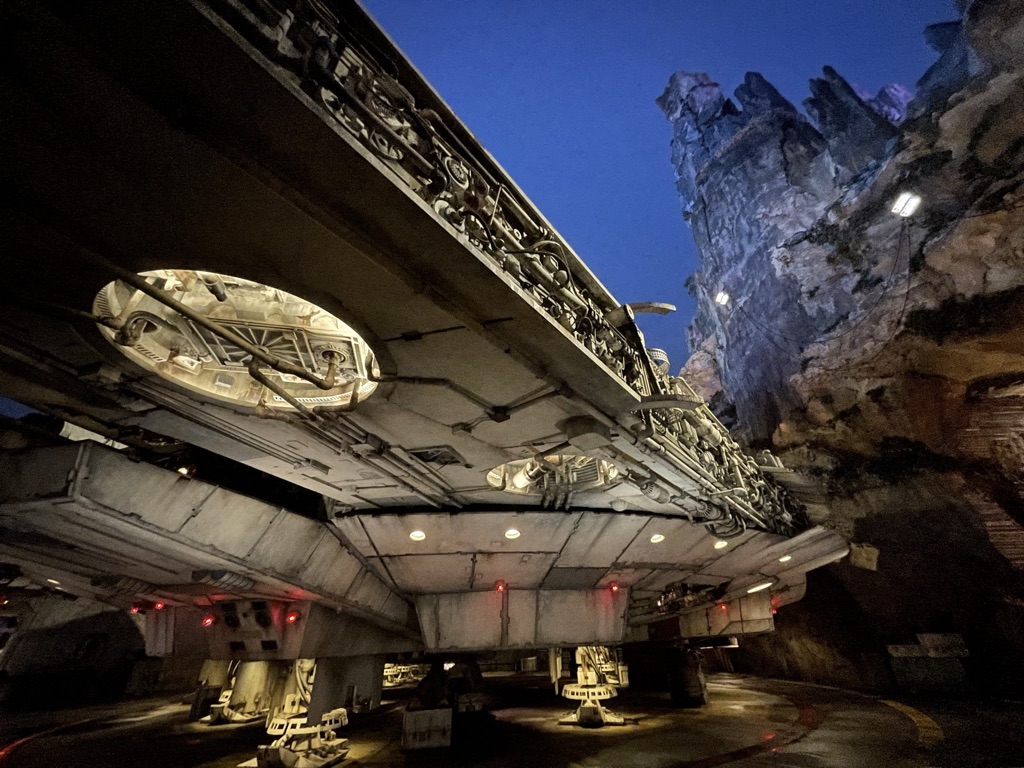 Something really neat is that the ride footage will change depending on the time of day you ride, so try it at night as well as during the day to see a wider view of Batuu as the light changes. After the mission, Hondo will calculate how you did and give you a score and ranking. If you did exceptionally poorly and allowed the Falcon to take serious damage, the hallways will be sparking and steaming as you exit the attraction. Personally, I got three different outcomes including different ride footage depending on how fast we completed the mission and how much coaxium we obtained. 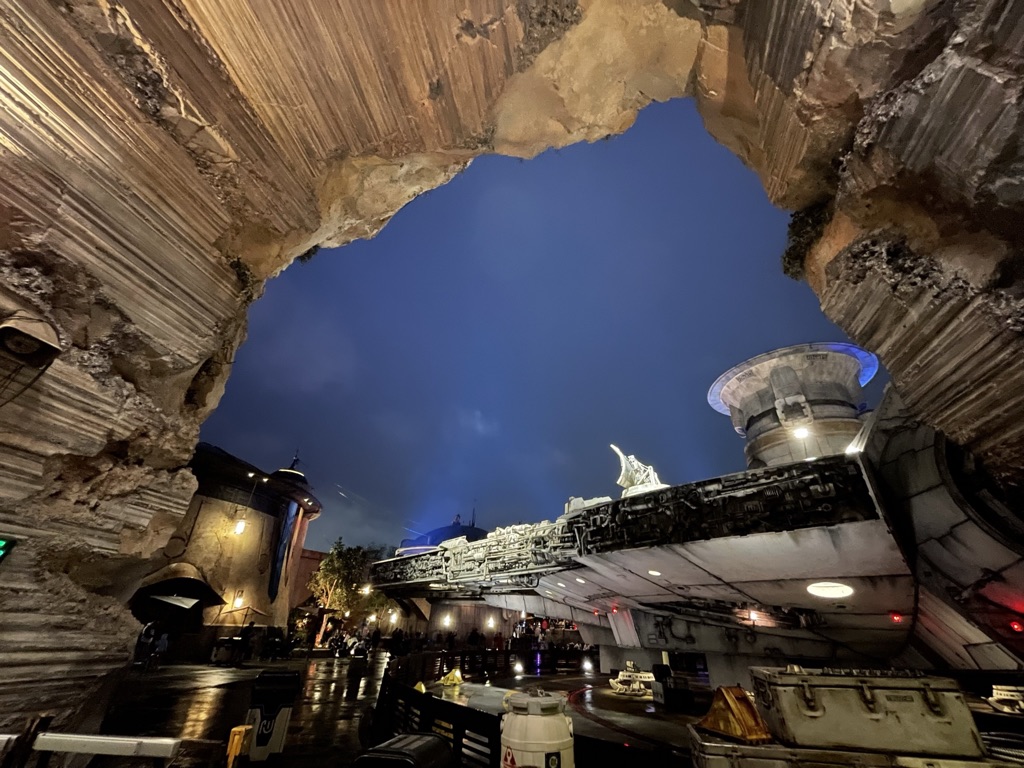 Overall, Millennium Falcon: Smuggler’s Run is an incredibly fun attraction and a great addition to Hollywood Studios. Plus, it’s included with Genie+ as a bookable Lightning Lane, just be aware you’ll skip a lot of the queue, so make sure to ride again while exploring the regular queue. There is a single rider line, but I believe that line skips out on the entire queue and even Hondo himself, so that should be for repeat customers only so as not to take away from the story. The ride offers a unique experience every time, even though the locations are mostly the same. The Imagineers have discussed the possibility of adding new missions, which I think would be a tremendous way to promote re-rideability, and would be more like what happens with Star Tours where you travel to a new destination each time. For Star Wars fans, there is no feeling greater than piloting the Millennium Falcon, and the dream-come-true nature of the ride is enough to place it very high in my ride rankings, and will give even the most casual fans the thrill of being in control of the fastest hunk of junk in the galaxy.

That’s it for part three of my in-depth Galaxy’s Edge review, make sure to keep an eye out for part four of this series covering Star Wars: Rise of the Resistance.

Have you ridden Millennium Falcon: Smuggler’s Run? How did you do? Let us know in the comments!