Top 6 Things to do at SeaWorld San Diego

SeaWorld San Diego, the original SeaWorld park, opened way back in 1964 as a marine animal park and aquarium. While San Diego’s SeaWorld primarily focuses on animals, they’ve added multiple roller coasters over the last few years. That includes the first B&M dive coaster on the West Coast, which opened earlier this year. I visited the park for the first time in several years to get on their newest coasters and check out the latest animal exhibits. Here are our favorite things about SeaWorld San Diego from that visit, and what makes it an excellent park for all ages!

SeaWorld San Diego’s Premier Sky Rocket II coaster isn’t significantly different than other Sky Rocket II models, but that doesn’t mean it isn’t fun. And since there are only a few of these in the US, for most guests it should be a can’t miss ride. My friend who joined me on this trip had never been on one and loved it, from the launch to the slow roll up top. Definitely a worthy coaster for a park that is growing out its ride lineup. 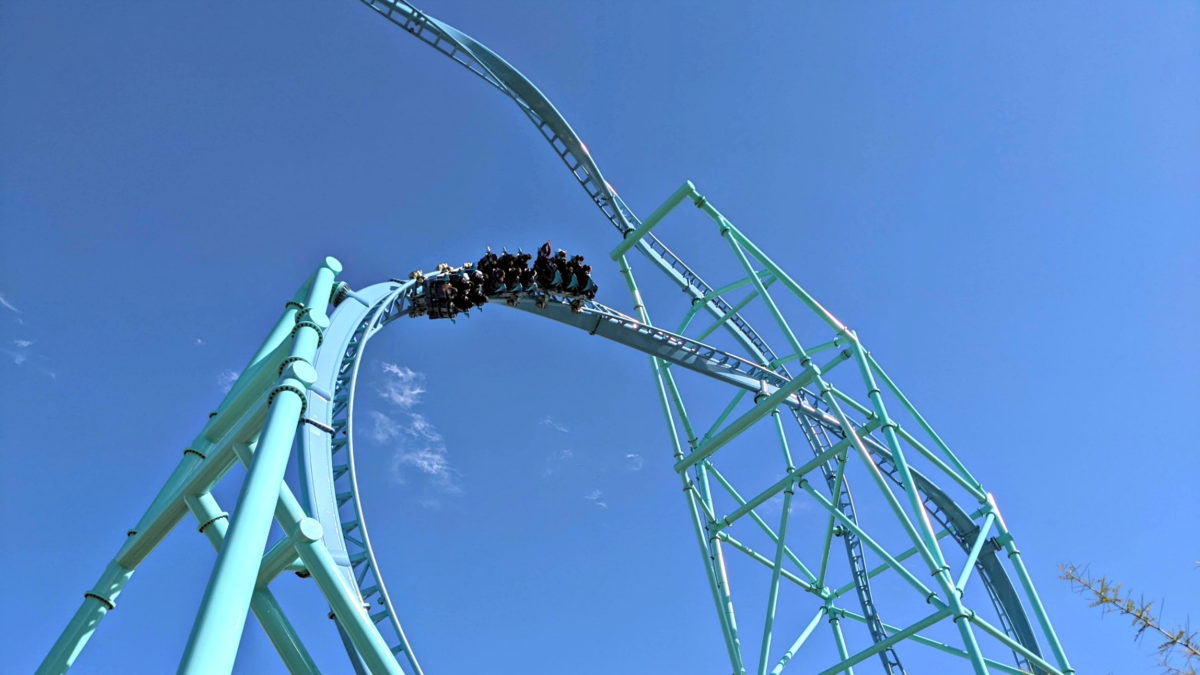 Electric Eel is a solid coaster addition. If you’ve ridden Sky Rocket II models it won’t feel very different, but for anyone who’s never ridden one it’s a must. 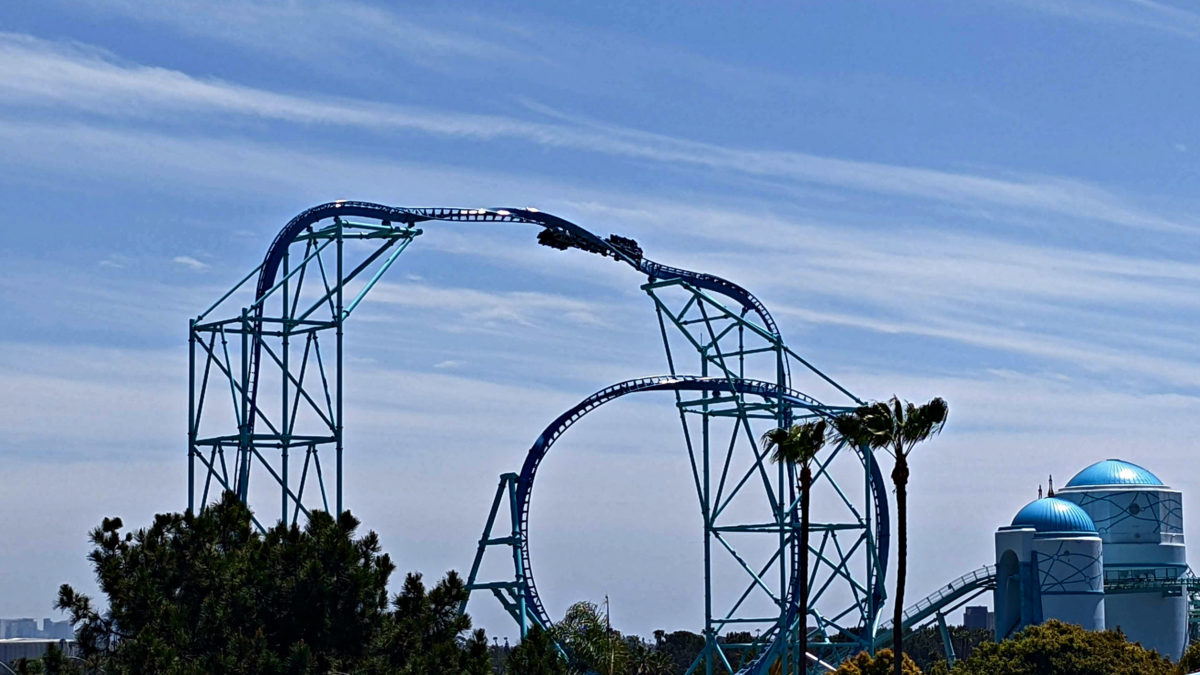 There’s always some controversy over SeaWorld’s dolphin and Orca shows, but if you’re reading this I’m assuming you’ve come to terms with them being at least OK. And the shows have definitely taken on a much more educational bent than they did years ago, with fewer “tricks” and demonstrating animal behaviors (although they will still get the first few rows soaked). It’s also worth taking a look at the orcas and dolphins in their exhibits aside from the show. They are unquestionably impressive animals, and SeaWorld is one of the only places most people to get a chance to see Orcas. So, if you’re there you kind of have to check them out. 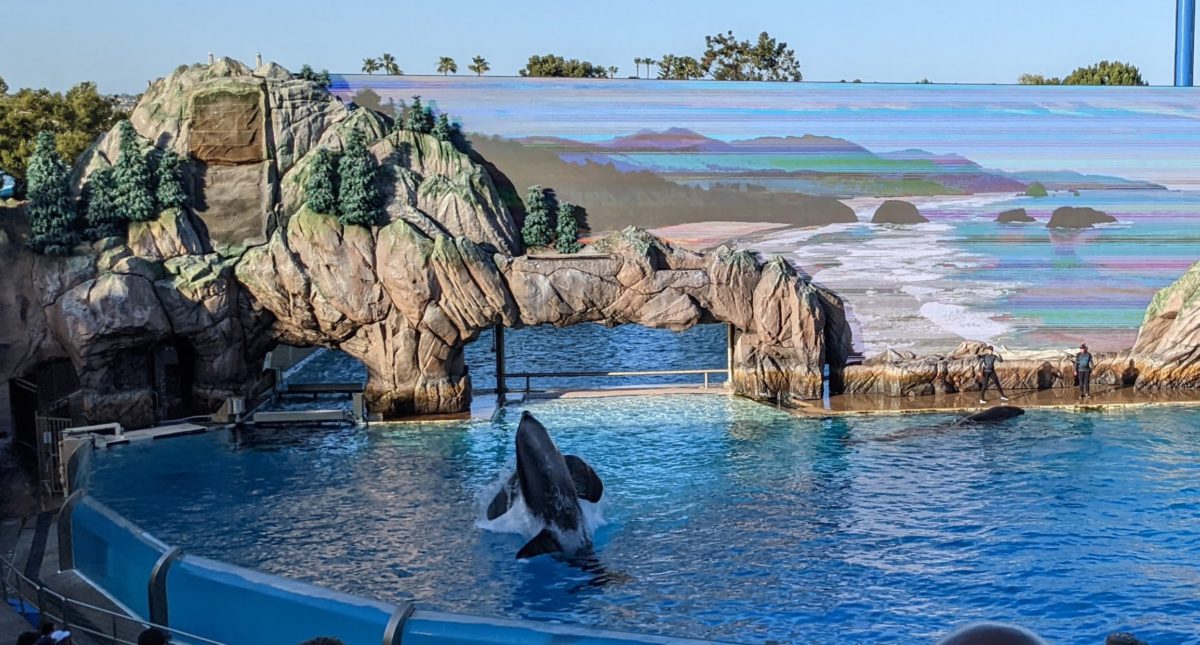 You can’t really go to SeaWorld and not see the Orcas. They are really impressive animals.

Who doesn’t love a theme park with Sharks? The Shark Encounter exhibit at SeaWorld San Diego is an impressive one, with a view of the pool from above — with lots of classic shark fins cutting through the water — and view below the tank. A SeaWorld ambassador hangs out in the above the water seciton, introducing guests to the different Sharks in the aquarium and answering questions. 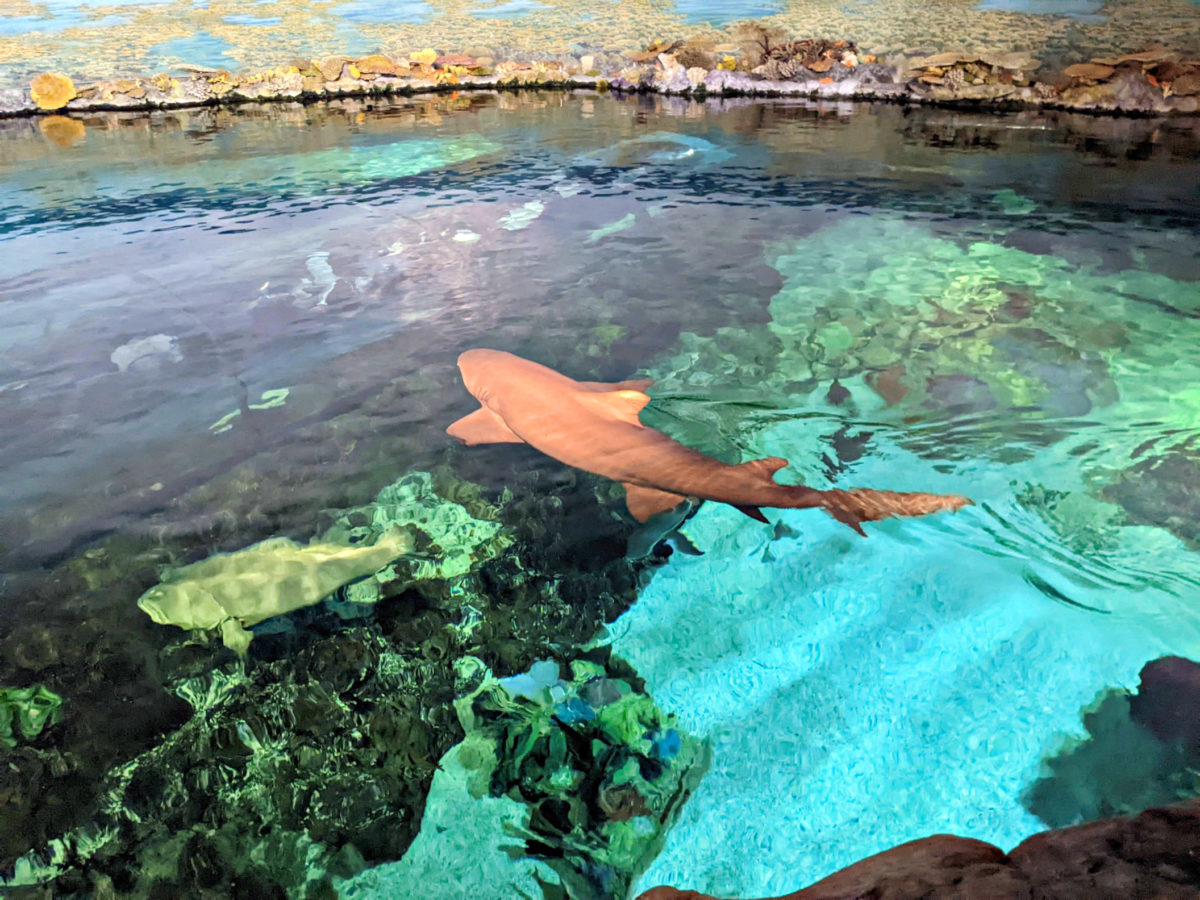 It also has a long moving walking way that goes through the tank, giving some great views next to and underneath the Sharks. A great way to see all those Shark teeth!

The Turtle Reef exhibit recently re-opened at SeaWorld San Diego after getting some enhancements following a closure back in October 2021. The exhibit has a huge tank, lit from skylights above, and a full, seamless glass wall to watch the animals. The park has three different kinds of sea turtles, all threatened or endangered. The turtles were incredibly impressive, and it was one of the best turtle exhibits I’ve ever seen. There are also interactive screens and games to provide an extra educational aspect about the animals. 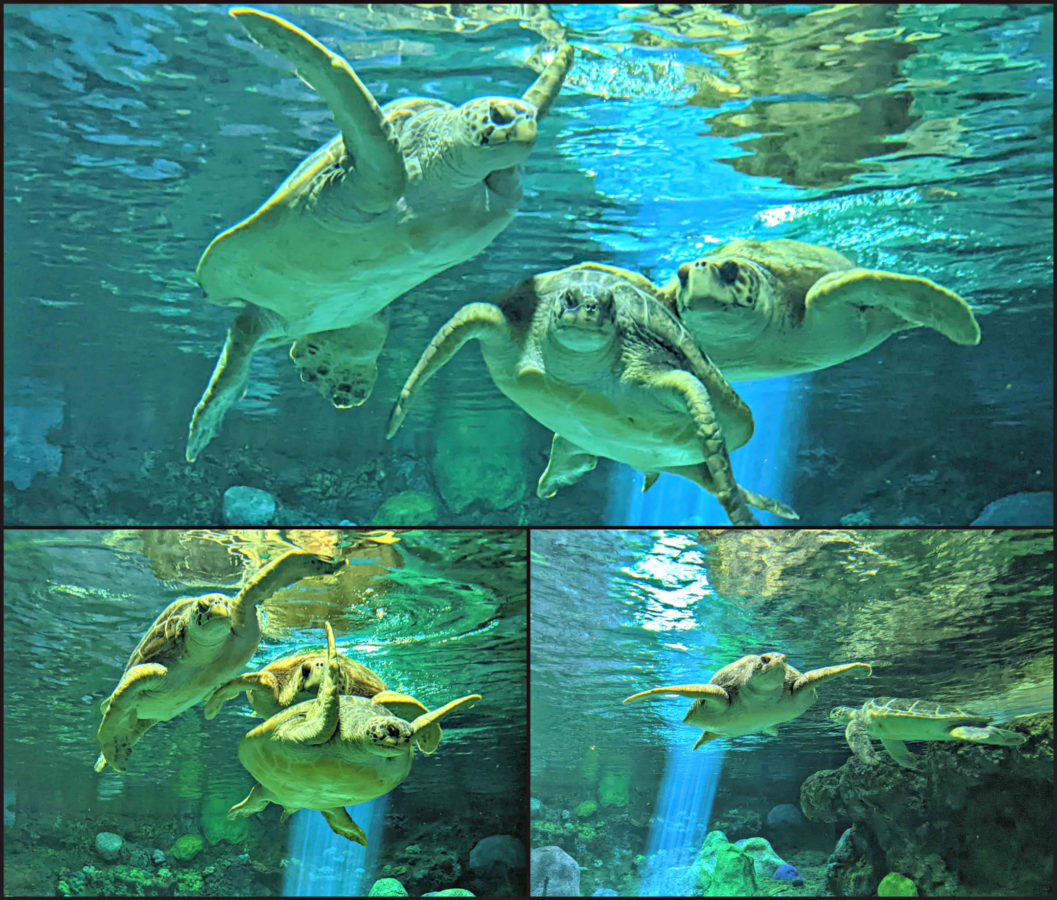 The newest coaster at SeaWorld San Diego, Emperor opened in March, 2022. The B&M dive coaster is the first of its kind on the West Coast. I’m a huge fan of B&M dive coasters, so I’m pretty exciting to finally have one out here. Emperor isn’t as big as the other Dive Coasters in North America at only 153 feet high (and about 2 minutes long), but the thrill of the hold and vertical drop is as good as ever. And the three inversions — an Immelmann, corkscrew, and barrel roll — all offer that buttery smooth excitement B&M dive coasters are known for. 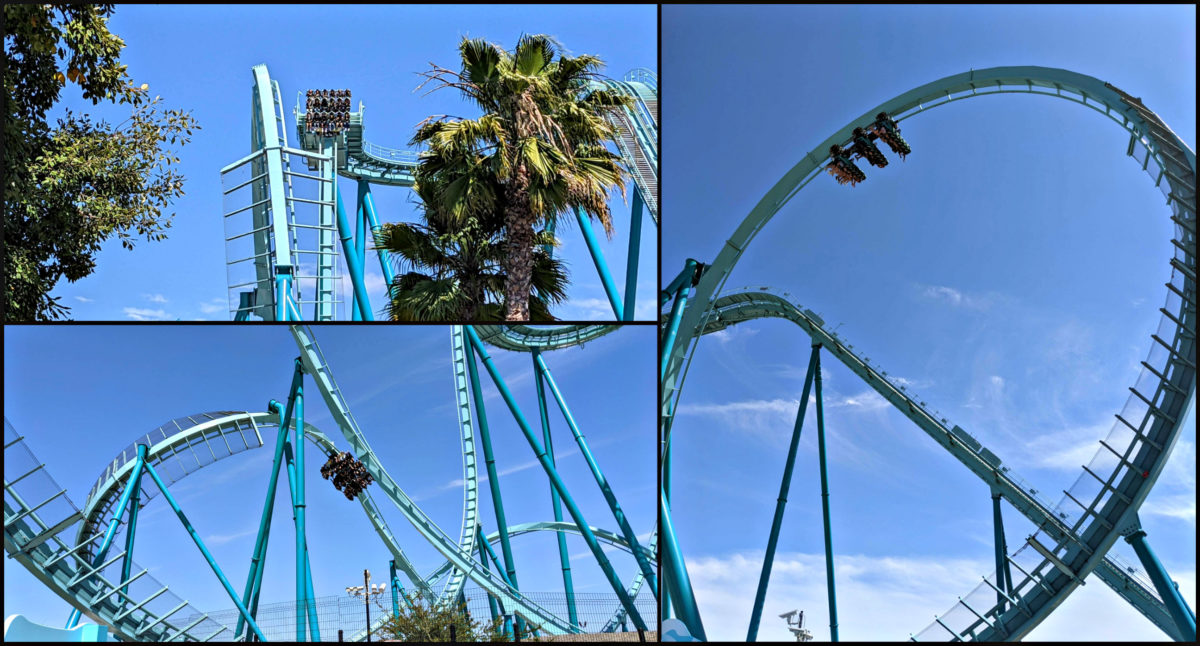 The newest B&M dive coaster delivers the smooth, big thrills you expect from these coasters. Those vertical drops never stop being a little nerve wracking.

If I had one complaint about the ride, it’s that it’s off by itself in a weird dead end corner of the park, without much landscaping (yet) and mostly a view of the parking lot. Hopefully over time the park builds out more on that side, and connects the ride more directly to the Penguin exhibits. With the Wild Artic ride closing at SeaWorld San Diego in early 2020, it might be to make way for a new path or exhibit linking the back of Emperor in the future. We’ll cross our fingers! 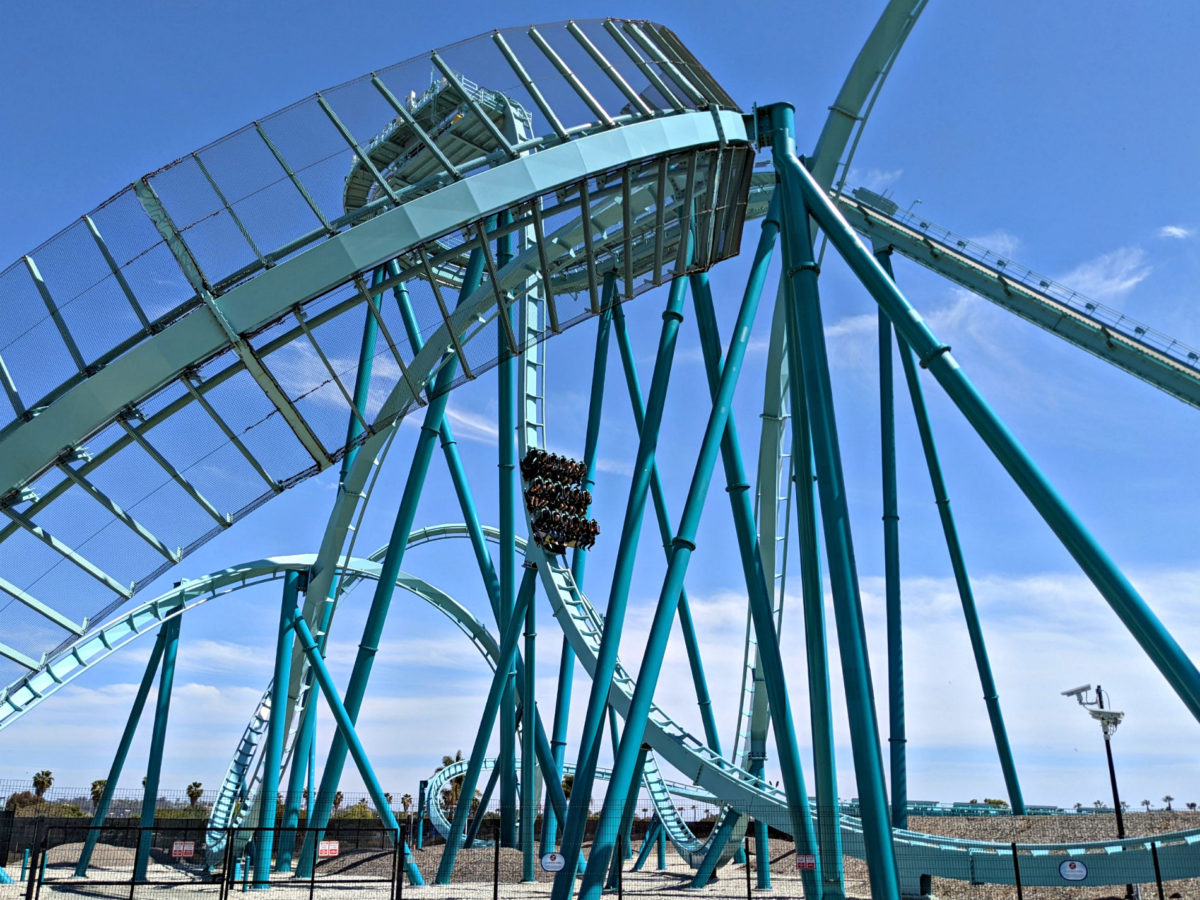 Emperor was a great addition to the park, and definitely offers the biggest thrills yet to SeaWorld San Diego. But, Manta remains my favorite coaster at the park. The Mack launch coaster opened in 2012, the first of SeaWorld San Diego’s coaster expansion. With two launches and a top speed of 43 mph, Manta does a great job of straddling that line between Family Coaster and extreme thrill ride. 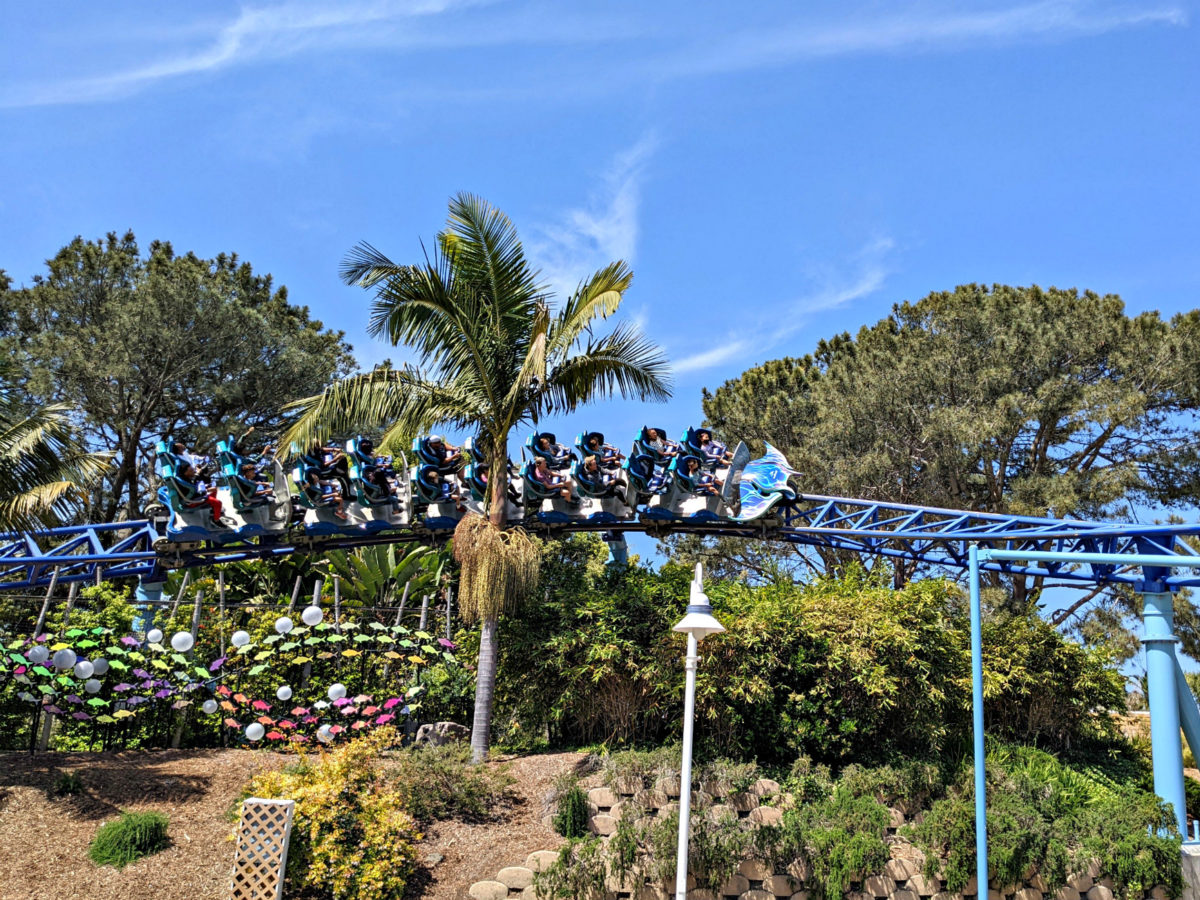 The landscaping around Manta is definitely one of the reasons it is my favorite attraction at SeaWorld San Diego. Its the coaster that “feels” most like it belongs at a SeaWorld park. 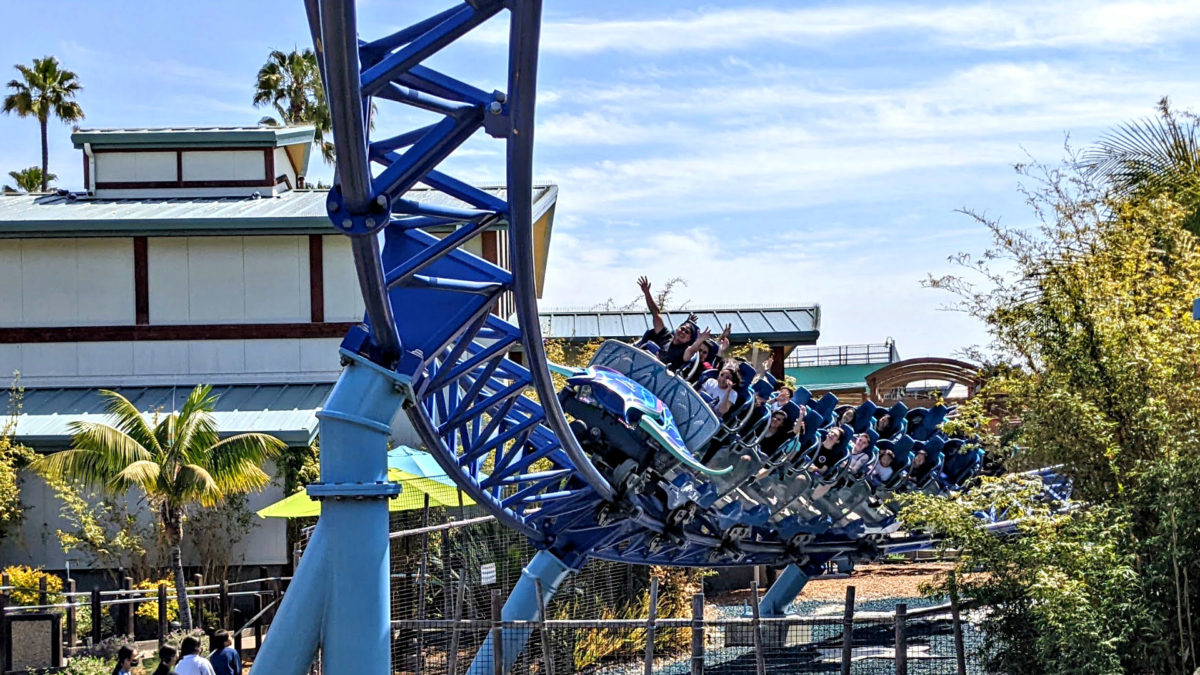 The launches feel fast, and the multi-media scene at the start helps build excitement. The twisted layout filled with small hills and crossovers keeps the ride exciting despite the lack of inversions or big drops. It also covers a really nice landscape with ravines, bright green foliage, and flowers, as well as a flamingo filled pond. Yeah, it’s not the biggest, most intense ride at the park, but shows off how a good ride layout can make for a really fun ride. If I could only ride (or re-ride) one coaster at the park, I’d do Manta. 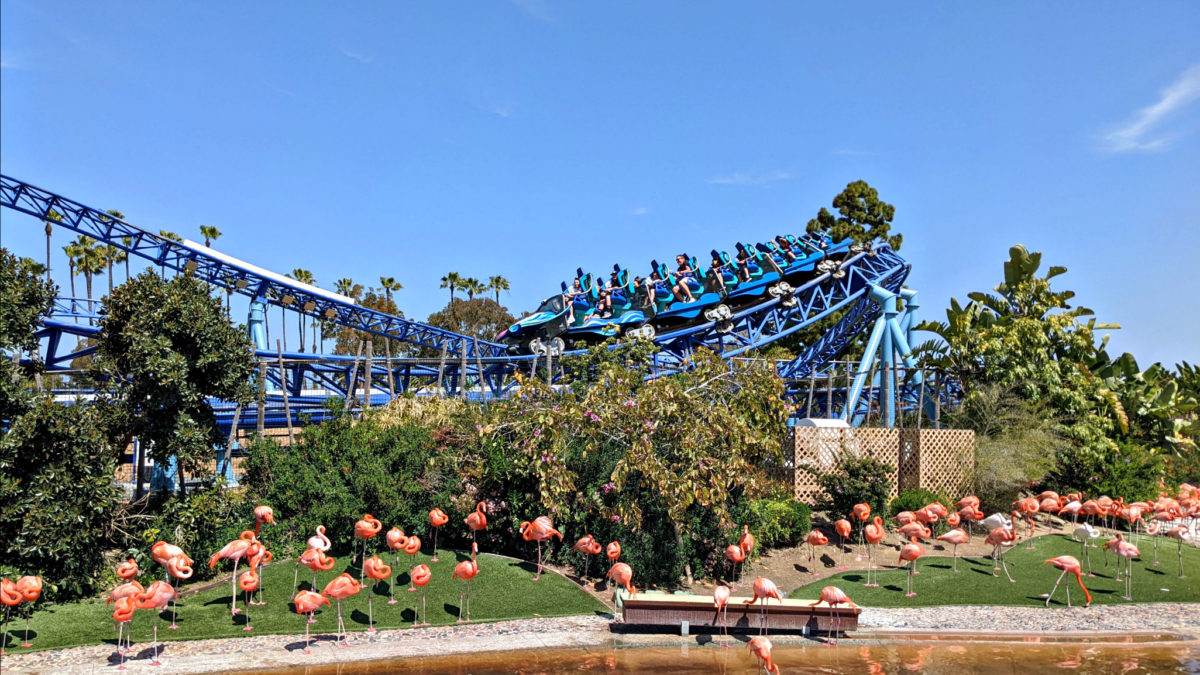 Can’t get a better view than a coaster racing over flamingos.

Those are our top-6, can’t miss attractions at SeaWorld San Diego! But really, it’s worth it to try to pop into as many of the other animal exhibits as possible. Almost every ride has some animal exhibit next to it, like the ray pool next to Manta. The large penguin exhibit and the animals next to the closed Wild Artic ride — including walruses and otters — are definitely worth a visit. Our trick was to take in animal exhibit or two every time we had a little bit of time to kill before a show or on our way to a ride.

The park really does a good job of balancing quality animal exhibits with a mix of roller coasters and rides. It means that whether you’ve got a group that loves thrill rides, prefers taking it easy, or something in between, there should something for everyone.

For more info on SeaWorld San Diego, including all of their events coming up this year, make sure to check out their website. What are your favorite rides at SeaWorld San Diego? Let us know in the comments below!