Last Friday Six Flags Discovery Kingdom installed the final piece of track for their newest roller coaster, Sidewinder Safari. And on Saturday, we joined ACE Norcal for a behind the scenes look at the coaster and construction site. For anyone who might not remember, Sidewinder Safari was announced by the park way back in 2019. Planned to open in 2020, the Covid-19 pandemic delayed the ride to this year, but it’s almost there.

Hisssssstory in the making! The last track piece has been put into place for Sidewinder Safari! 🐍🎢https://t.co/aQqr1rb2Q6 pic.twitter.com/kaO2uMuL0F

Sidewinder Safari is a spinning Wild Mouse coaster built by Zamperla, known as Twister Coaster model. The Zamperla Twister Coasters are based on the old Reverchon spinning wild mouse coasters, like Exterminator at Kennywood (Reverchon is out of business now, but had worked with Zamperla on the model back in the 2000s). The coaster is 1,378 feet long and 42.7 feet, the same as the Ragin’ Cajun model at Six Flags America. The 4-person across cars have individual lap bars, unlike the old Reverchon models. 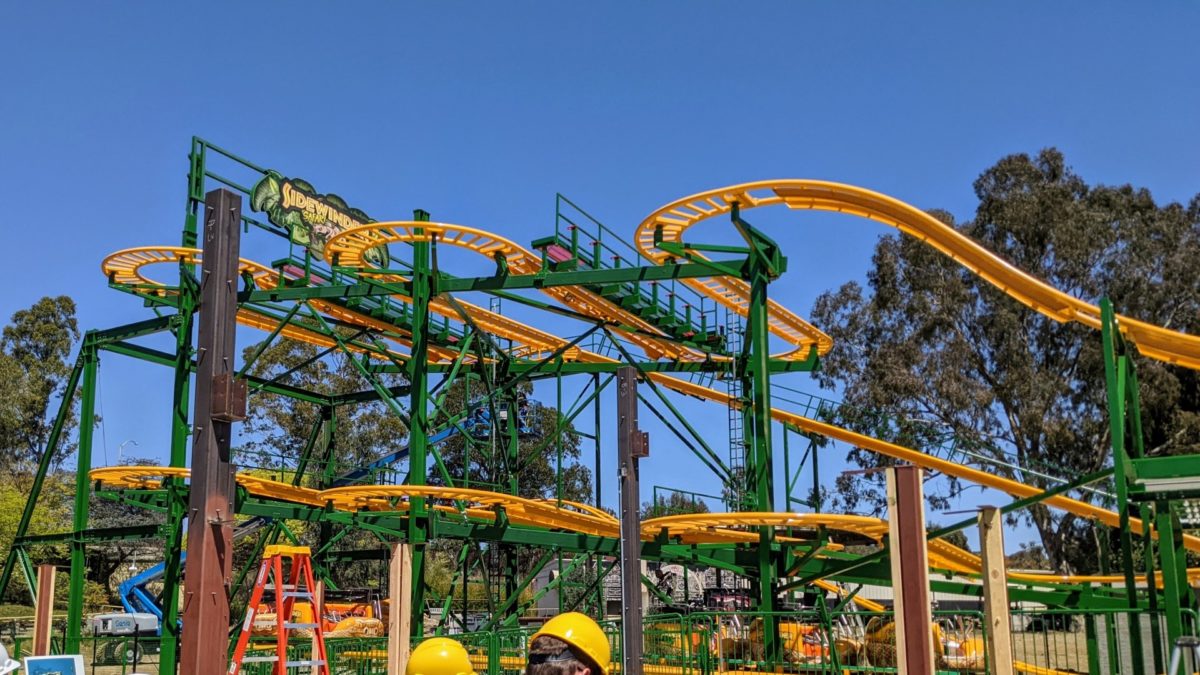 What Makes it Unique? 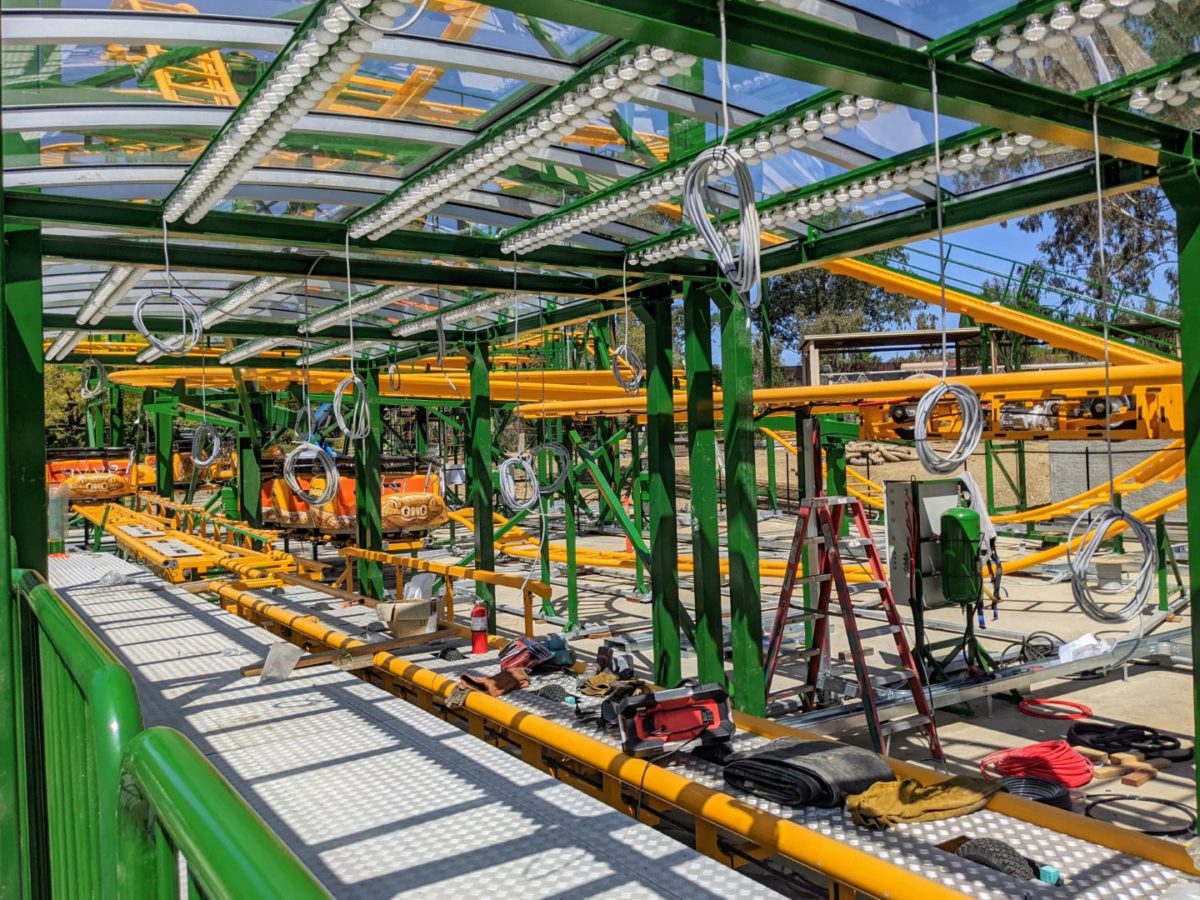 Sidewinder Safari will have a moving station, where the cars never come to a full stop. Hopefully this will speed up load and unload times.

Charles Laureano, Six Flags Discovery Kingdom’s Ride Maintenance Manager and the lead on the project, also explained it uses an advanced safety PLC that is standardized across most of Six Flags Discovery Kingdom’s Rides. This won’t really be noticeable to riders, but is an extra level of safety and using the same PLC as other rides should help with maintenance and operations. 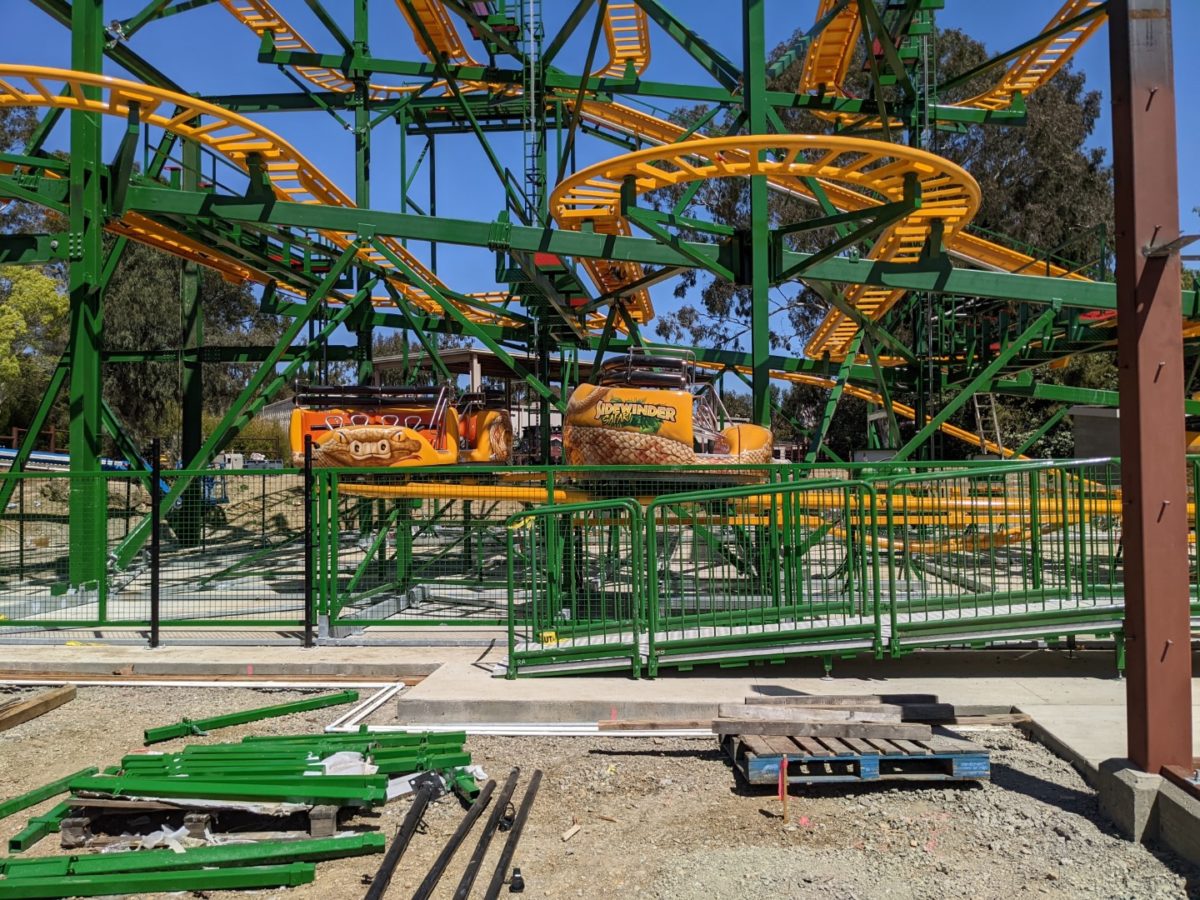 The Discovery Kingdom team is adding audio to the length of Sidewinder Safari’s track to up the experience. They’ve also installed extensive flood lighting from behind the front bridge of the sign to illuminate the ride. They may be adding additional light arches to the lift hill, as well (you can see one arch at the bottom in the photos below). Laureano told me that the exact number is still TBD. They want to install the audio first and make sure there is still plenty of room to mount the archways. 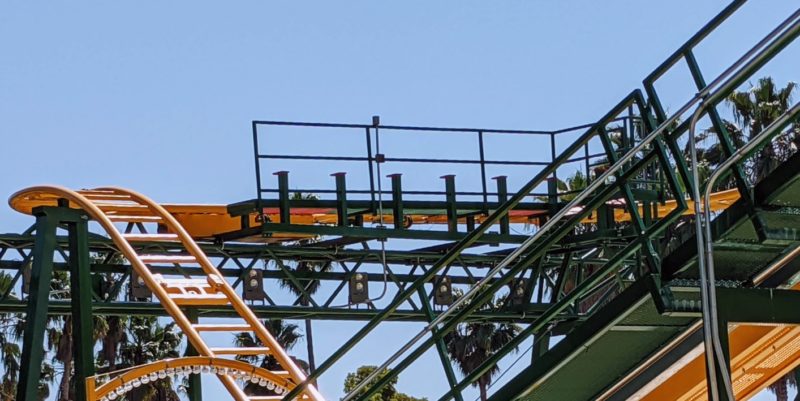 You can see the floodlights under the bridge, directed at the ride. 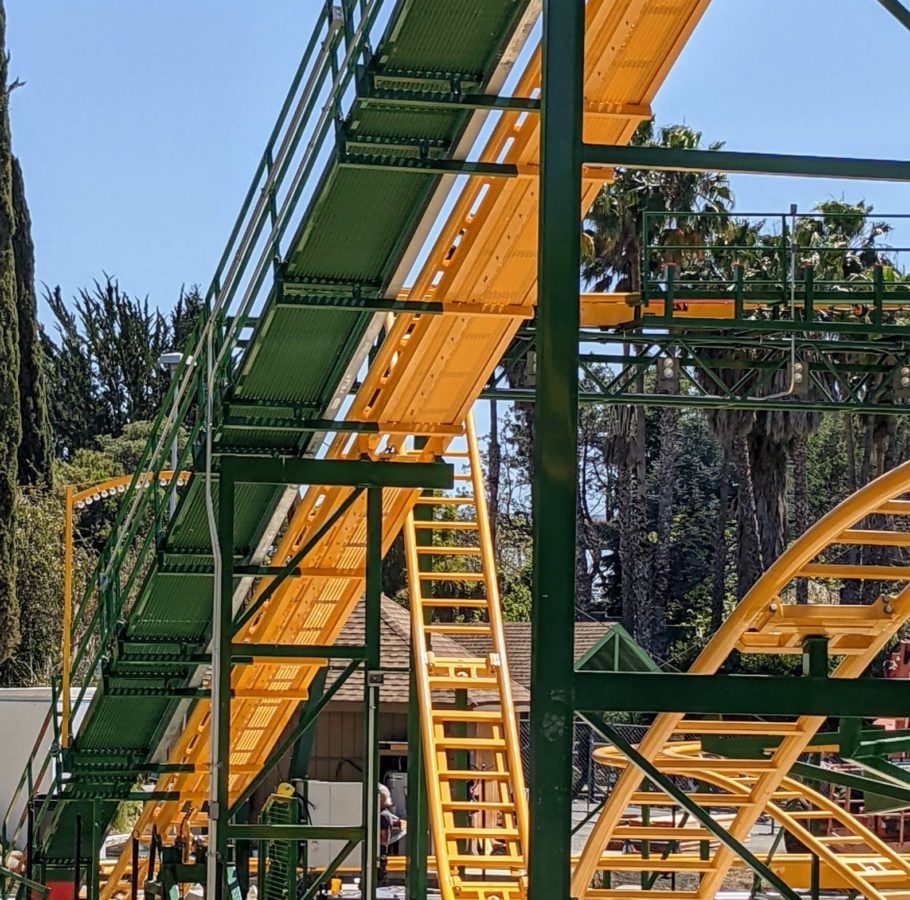 The lift hill will have speakers mounted to it, and possible more light arches like the one at the bottom. 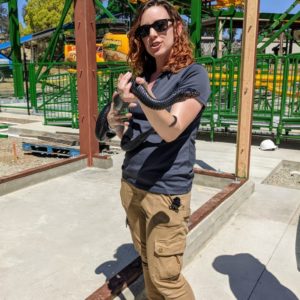 Snake on the tour! The park’s snake expert Amy talked to us about the new snake habitat coming as part of the ride.

The other big part of the attraction is the construction of a new snake exhibit as part of Sidewinder Safaris queue. The park currently has a small reptile house, but they have numerous snakes that currently don’t have an exhibit — they’re kept in a back habitat. Discovery Kingdom’s Snake expert, Amy, brought Michele, an Eastern Indigo snake, as part of the tour.

She told us they don’t know the exact number that will move over to the new site, but hope to figure it out as construction continues. They also explained to us that the exhibit is being built on a separate concrete pad and foundation that will limit the vibrations from the ride in the exhibit.

You can see the concept art for the animal enclosures below. 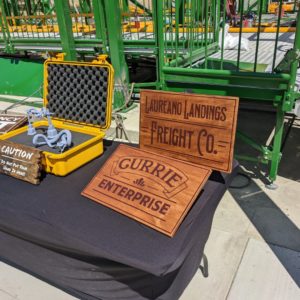 Along with the snake habitats, the queue will have other themed touches. Laureano explained that the team consulted with their animal experts to add a soundtrack of animal noises in the queue that will match the sounds of animals from the natural habitat of the snakes on display.

Additionally, because of the “safari” part of Sidewinder Safari, the queue will have “explorer” type theming. The team found old generator equipment they’ll use to mimic a remote jungle campsite, and explorer themed signs will dot the queue. A nice little Easter Egg is that the names on the signs are all people who worked on the project (like the Laureano Landings sign to the right).

Lastly, the entry to the ride is going to have two large, stone and wood pillars with a giant snake across the top. They showed off a few of the concept models for the full size sculpture currently being built. It should be an impressive piece to draw guests to the ride.

Concept art for the Sidewinder Safari entry, and models of the snake statue.

Although Sidewinder Safari is a mostly standard spinning Wild Mouse, the tour made me pretty excited about it. I appreciate the extra attention the ride is getting to make itself unique, like the lighting and audio. And the moving station might solve my biggest problem with most Wild Mouse Coasters. And I really like how much attention to detail they’re aiming for in the ride queue. 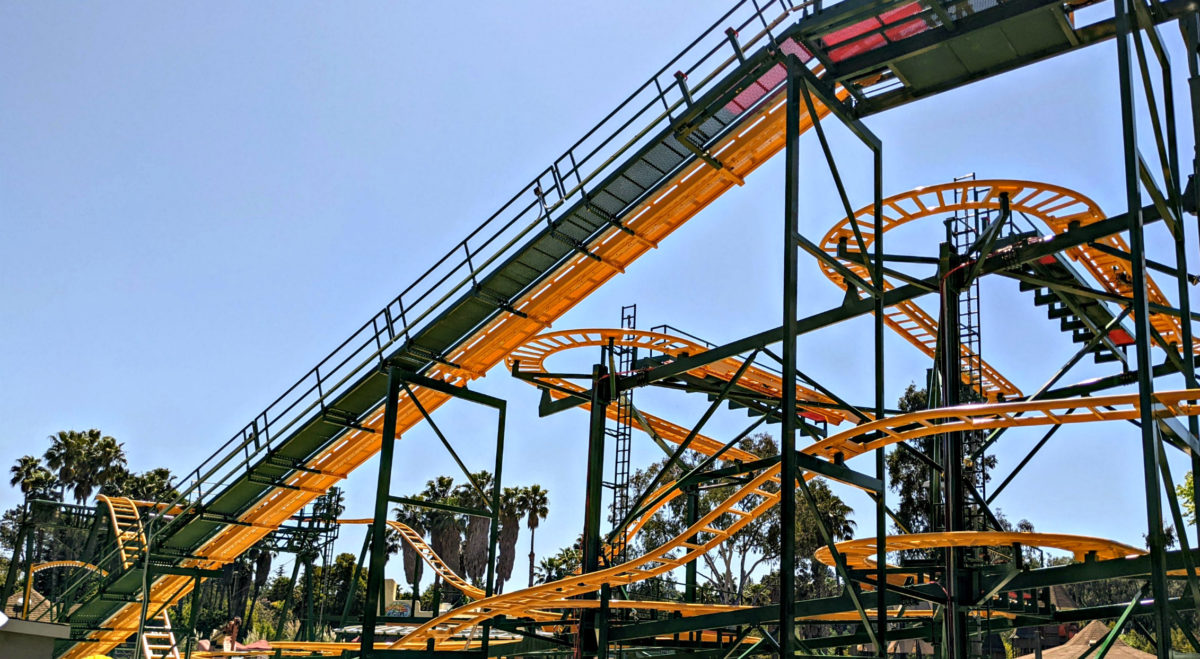 Having an animal exhibit already makes it more than your average Six Flags coaster, but it looks like they’re really going to lean into the snake theme. After years of DC rides opening at Discovery Kingdom, it’s really nice to see them working with animals and going for something unique on Sidewinder Safari. 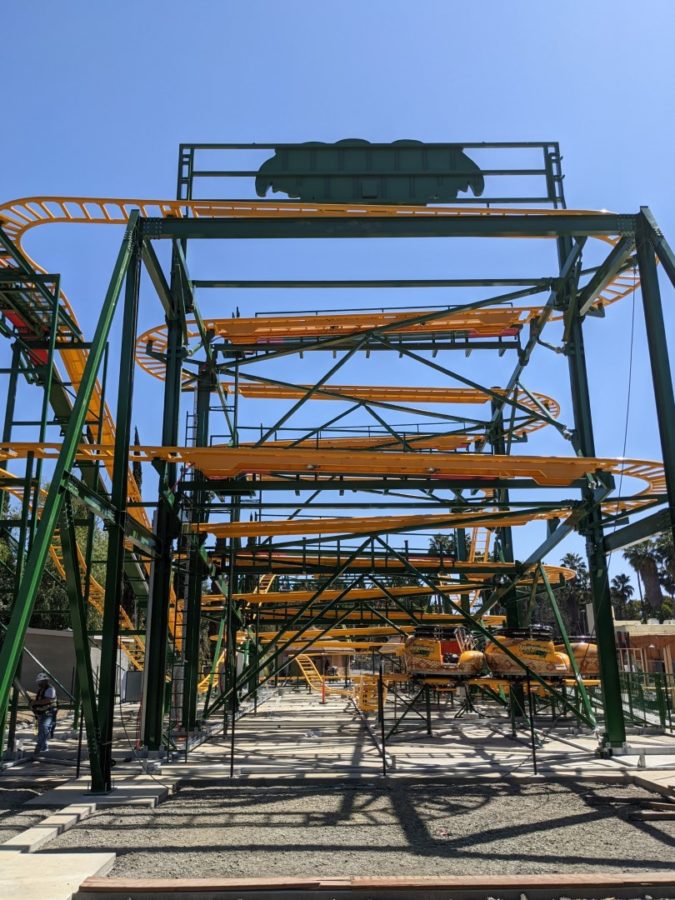 Big thank you to ACE Northern California for inviting us to join their construction tour, and to the whole Six Flags Discovery Kingdom team for letting us take a behind the scenes look and answering all of our questions!

There isn’t an official opening date for the ride yet, but the track is complete, and cars are on it. The park hopes to start testing in the next few weeks, and hopefully that means opening date will be just around the corner! Check out the Six Flags Discovery Kingdom website for more info, and make sure you’re following us on Twitter, Facebook, and Instagram for any updates on Sidewinder Safari, and every other new coaster!