Six Flags Great Escape is a park that may not always be on a lot of coaster enthusiasts’ radar, mostly due to its remote location in upstate New York and more family-centric ride lineup. I spent three days at the park a few summers ago, and while Great Escape may seem too small for a long weekend trip, I had a great time and wanted to share my review of this charming park near Lake George as the summer season begins. 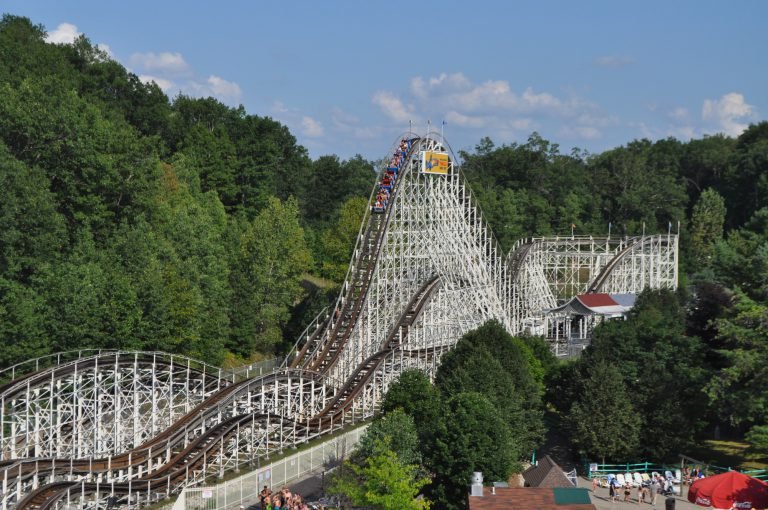 I have always been of the mindset that to truly appreciate a theme park, you typically should spend at least two days there. With some smaller amusement parks, however, this is just not necessary. Most people would be inclined to put Great Escape in this category, and I would have as well before my trip. After having been to the park, I can say that I found the charm and appeal to be a pleasant surprise. I think that as coaster enthusiasts, we often get too focused on collecting as many credits as possible, and can sometimes overlook places like Great Escape in favor of larger scale parks. So let’s take a look at why I think Great Escape is worth your long weekend, and why you may find your new favorite hidden gem park in Queensbury, New York.

The first reason that Great Escape stands out is where it is located. Just around the corner from Lake George, a popular tourist town, the park is nestled in the Adirondack mountains, and it’s stunning. Driving up to this park offers some great New York state scenery, with birch and oak trees lining the highway. This makes Great Escape a rarity in the theme park space because of the fact that there is an abundance of shade throughout the park. 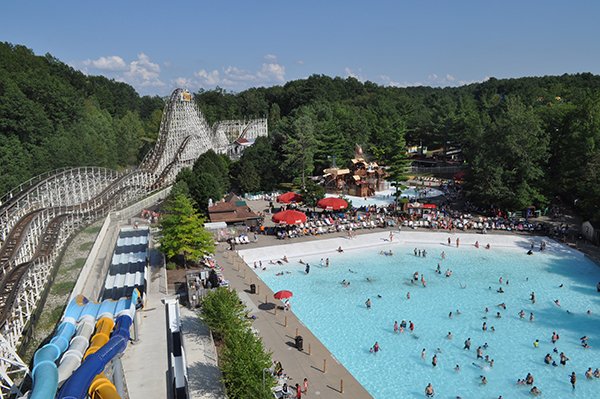 This ties into the theming and history of Great Escape, since the park used to be Storytown USA when it opened in 1954. There is storybook theming throughout the front area of the park, and the entrance has a very charming fantasy village look in its architecture and scenery. There are even swan boats available for guests to ride down the park’s scenic river and get unique views of some of the rides and lands. 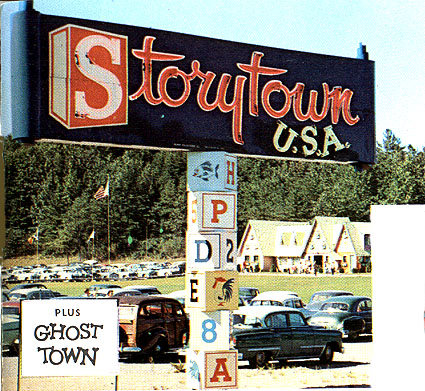 This is not typical for most regional theme parks, and especially not for the other Six Flags parks that I have visited, so it is very refreshing to see that the whimsy of the park survived the change in ownership. The other areas of the park are themed as well, with areas such as Fest Area, a Bavarian-inspired region, Ghosttown, an old western town featuring the park’s newest thrill ride, Adirondack Outlaw, and its premiere steel coaster, Steamin’ Demon. There is also Hot Rod USA, a 1950s area, and Timbertown, the children’s land. 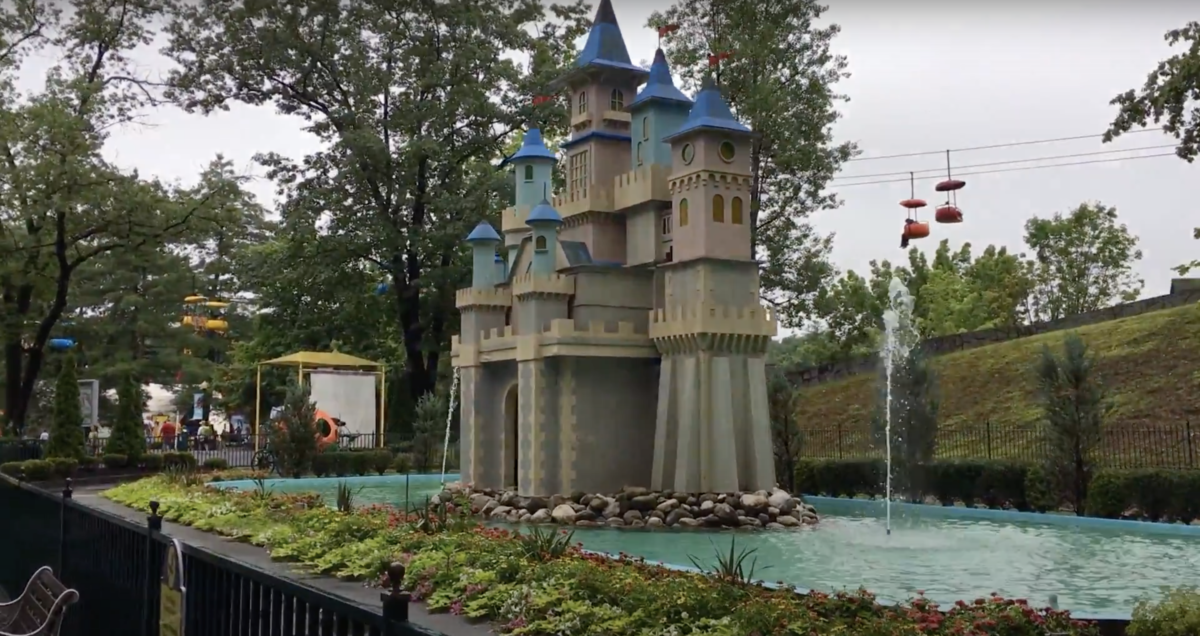 While other Six Flags parks have named areas as well, the ones at Great Escape feel earned, and lean more into their themes. The included-with-admission waterpark is also very nice, I spent half of a day there on my trip. Their mat racer slide was the highlight for me, and the park also features a Tornado slide as well as a Proslide trapdoor body slide. There are separate water attractions inside the park’s hotel, Great Escape Lodge, as well.

Great Escape has some high quality and unique attractions that may surprise you, even outside of their coaster collection. While it may not feature any record breakers, that doesn’t mean anything when it comes to quality rides. 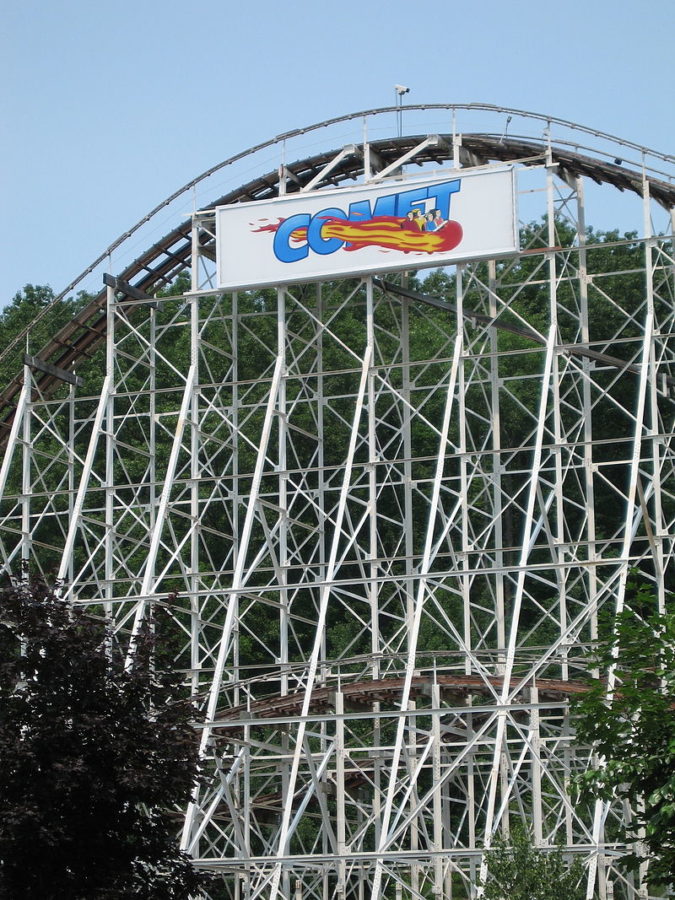 The main reason most coaster enthusiasts will make the trip to Great Escape is to ride their classic wooden coaster, Comet. Originally located at Crystal Beach in Ontario, Canada, Comet was built in 1948. When it moved to Great Escape in 1994 after being in storage at Fantasy Island for a few years, it was given extensive track work and remains smooth even to this day. The ride features some top quality airtime, and a long double out and back layout with tons of fun drops. While there may be a few rough spots, that’s part of the charm, and for a coaster built almost 75 years ago, it’s in pretty good shape for its age. 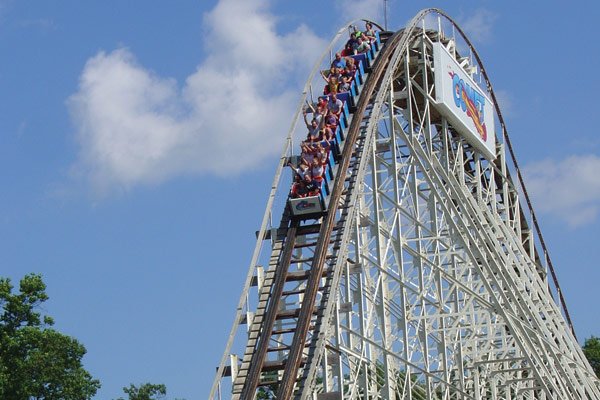 The first drop is a lot of fun, and the turnarounds offer some serious laterals that can only be found on coasters built in that time period. The location of the coaster is an interesting one, situated between a water park area and the hills of the Adirondacks. It’s in the back of the park, so it’s a longer walk to get there, but the secluded setting adds to the charm of the coaster. 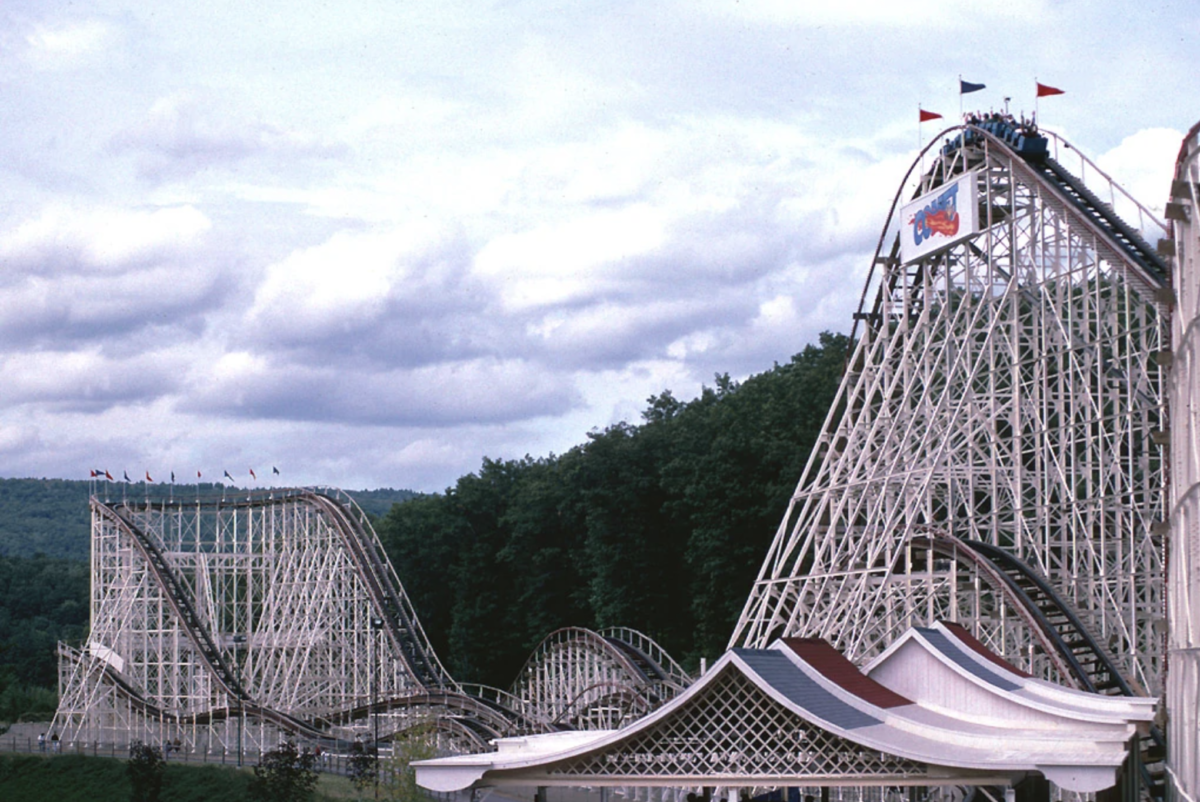 Right in front of Comet is one of the more underrated attractions I’ve been on personally, the Zamperla Midi Discovery called Extreme Supernova. 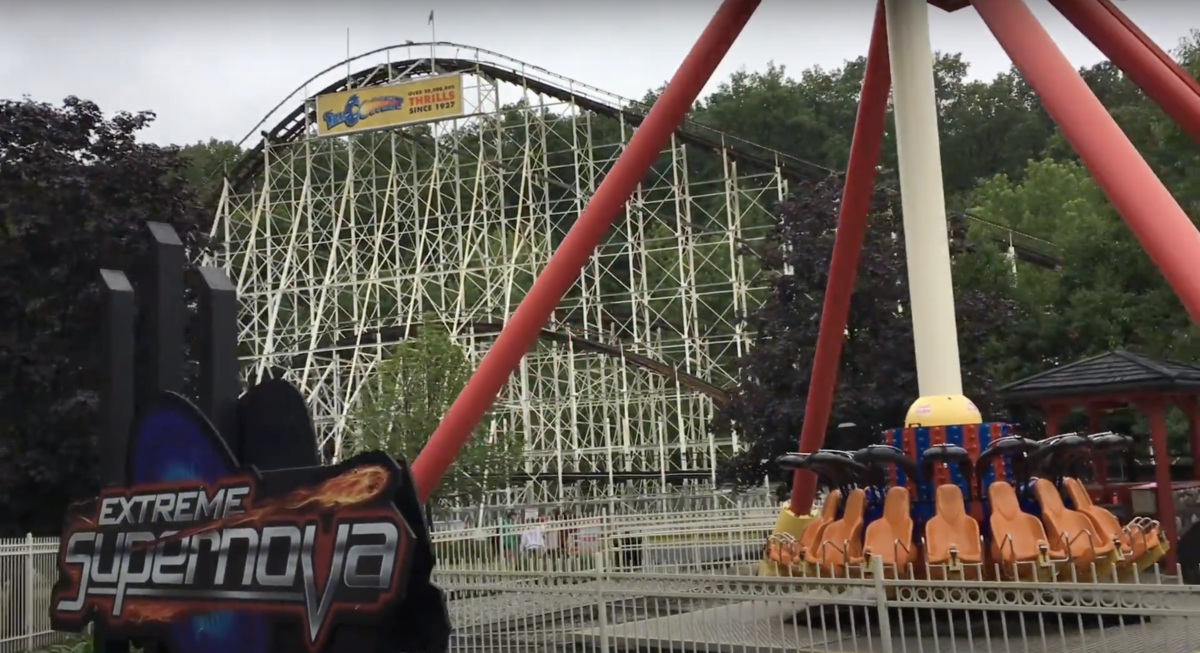 Don’t let the size fool you, Extreme Supernova packs a serious punch. Its smaller size means that the thrills are contained, making it more whippy as opposed to the Giant Discoveries, which focus more on the swinging. The ride is as disorienting as you would hope, and it’s one of those rides that I had to take a break before riding again. 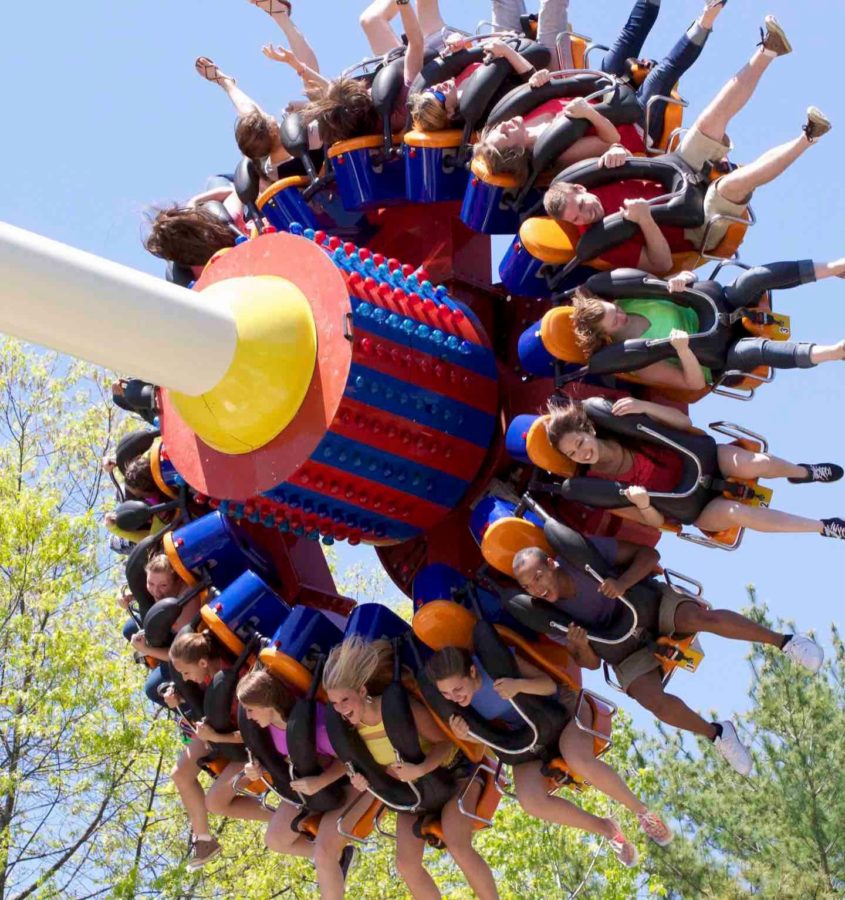 Did you know that Great Escape has a bobsled coaster? I certainly didn’t when I visited the park. Due to the ride’s amount of downtime, Alpine Bobsled has become one of the more rare credits at a regional park. 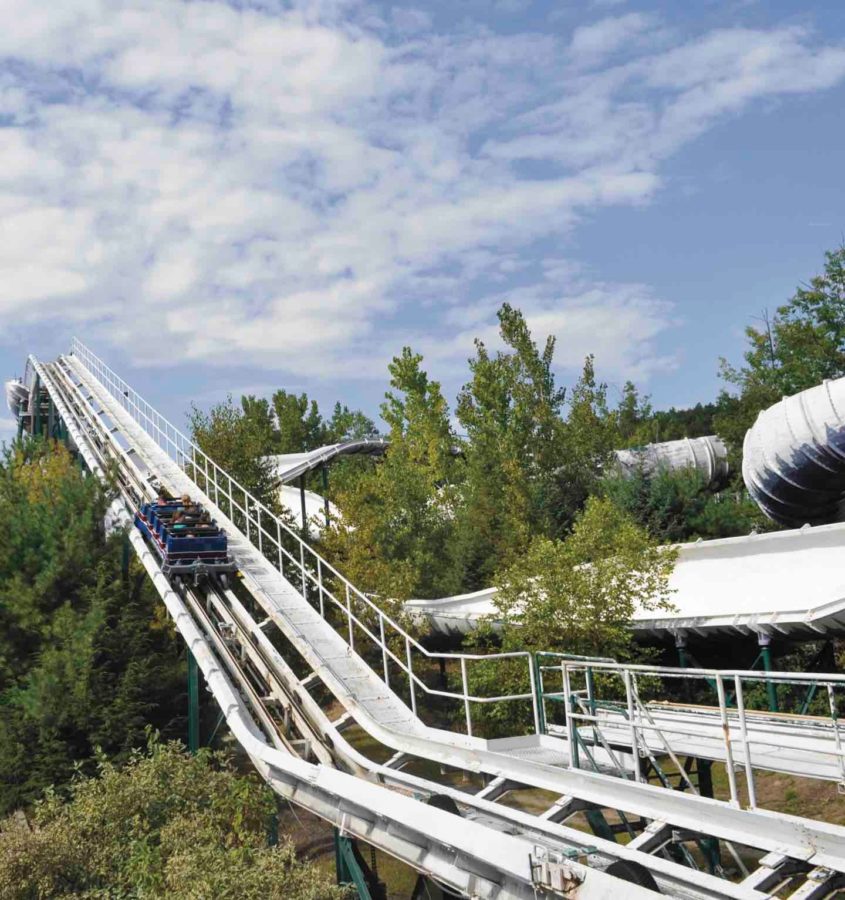 This unique ride began its life at Six Flags Great Adventure for four years in the 1980s, then was moved to Six Flags Great America until 1995, and debuted at Great Escape in 1998. Alpine Bobsled has an Olympics theme, with the different cars decorated as competing countries. 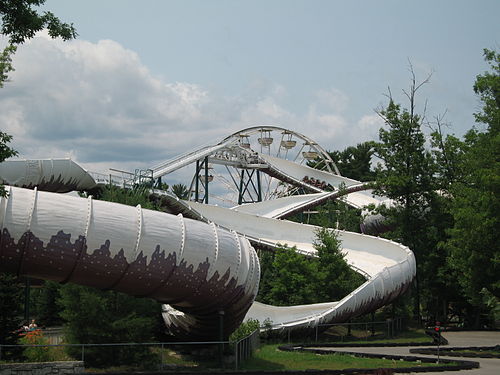 The ride layout is extremely fun, and more thrilling than you may think. When the cars start going up the side walls of the non-traditional track, it is a unique sensation that will make the pit of your stomach drop in a different way than other coasters can provide. 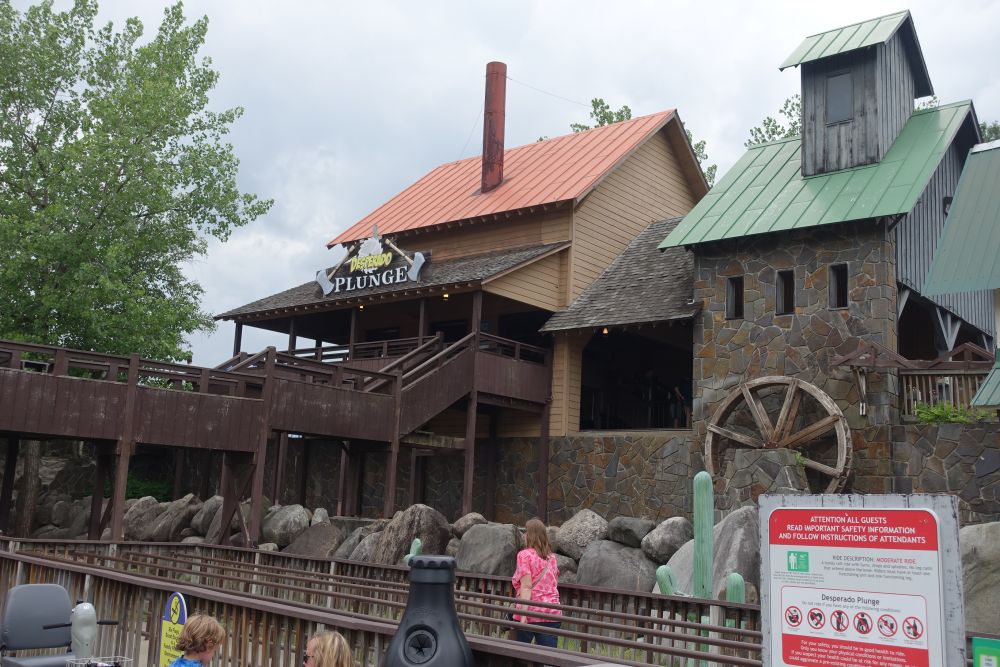 Located in the park’s Ghosttown area, Desperado Plunge is a log flume ride that has remained at the top of my favorite water rides due to its length and classic theming. Relocated from Busch Gardens Los Angeles (look it up!) in 1979, this Arrow Dynamics flume winds around the back area of the western section, where there used to be a themed experience for guests to roam around. 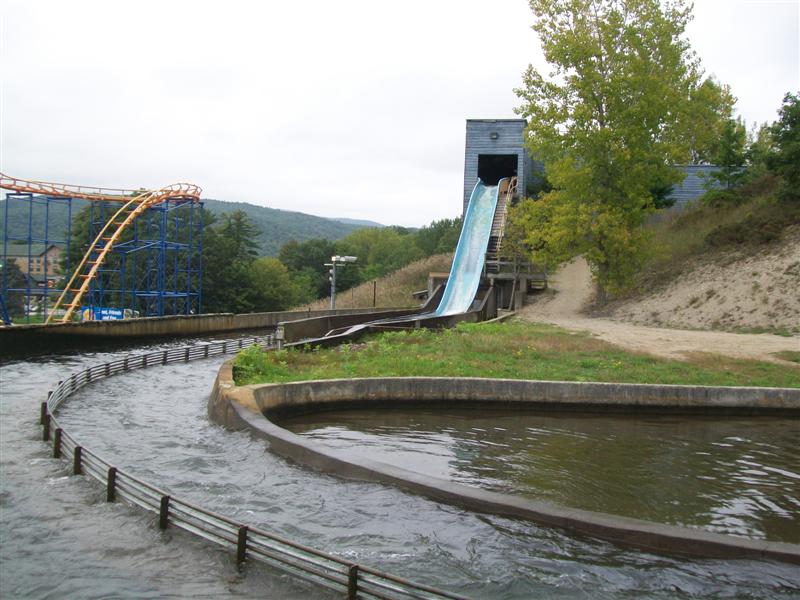 There are some fun animatronics before the final plunge out of the Great Escape sign that can be seen from the road, and this drop is one of the more effective I’ve experienced on a ride like this. 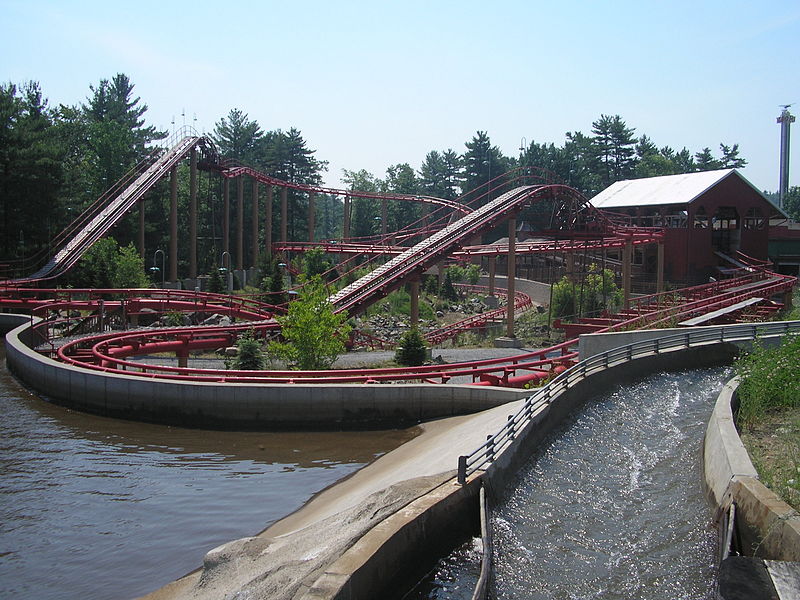 The park has two Arrow coasters, one being a mine train named Canyon Blaster, and the other a corkscrew model called Steamin’ Demon. If you’ve been on either of these types of coaster before, you know what you’re in for. 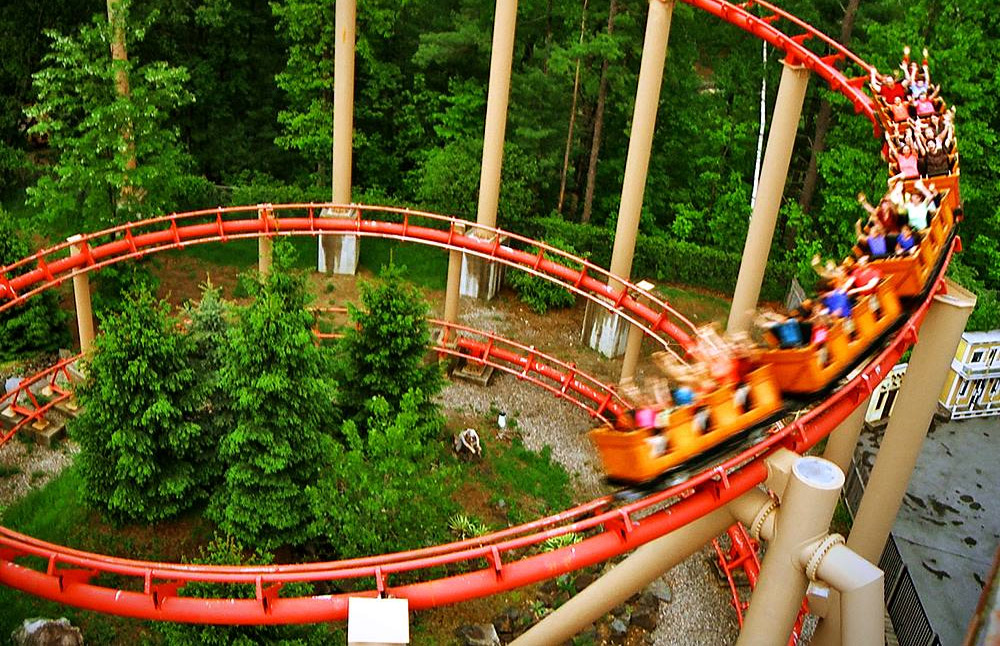 It’s definitely not the most smooth experience, but they are fun if you know how to ride them carefully, and Steamin’ Demon makes a great first impression as you can see it driving up to the park. I actually rode this ride back when it had virtual reality, and while that’s not there any more, it’s nice to see that the park tried to keep innovating with this attraction. 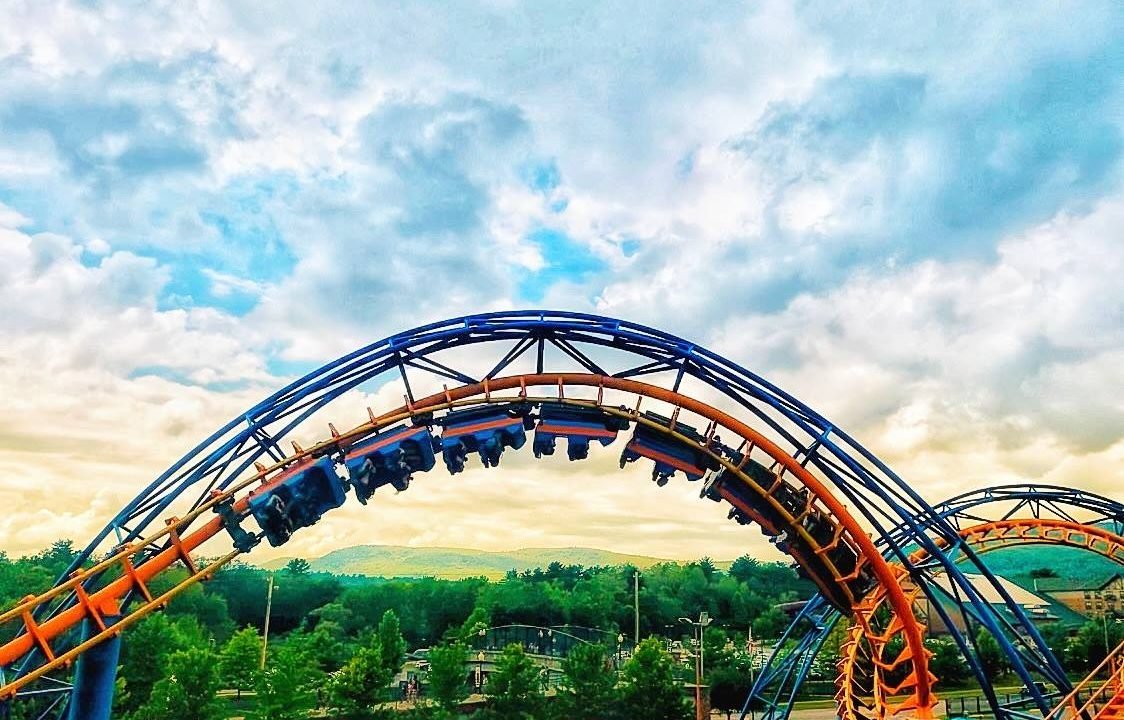 It’s also worth talking about Sasquatch, the park’s drop tower, which actually has some theming around it. The unique two-towered design can be seen driving up the road to Great Escape, and makes a great first impression. 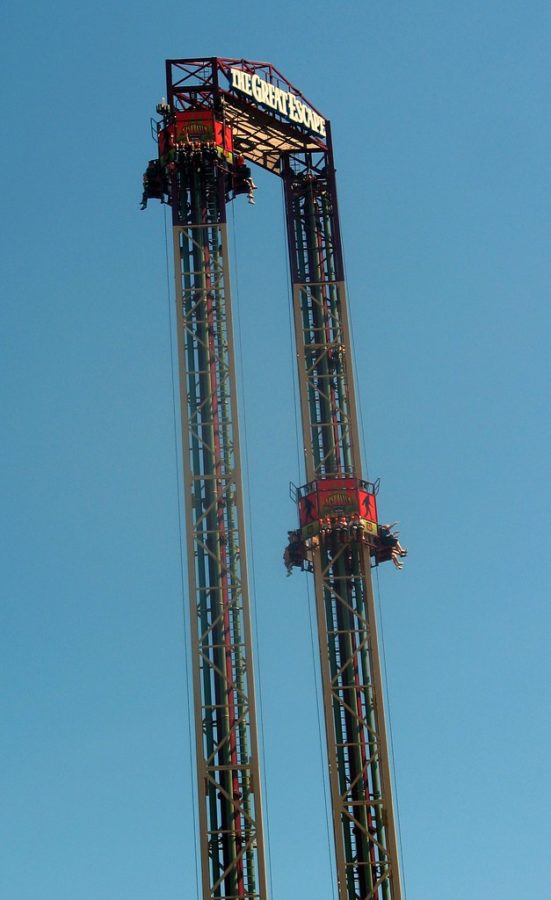 A few other fun flats that stand out are the park’s Huss Condor, the outward-facing Chance Freestyle called Pandemonium, the new Funtime Volmatron named Adirondack Outlaw, and a skycoaster.

The Great Escape also has their own on-site hotel called Great Escape Lodge, which features an indoor water park and traditional and themed suites. Rooms booked at the lodge are almost always offered with a park ticket add-on bundle, so it may be worth it to stay on property during your visit. 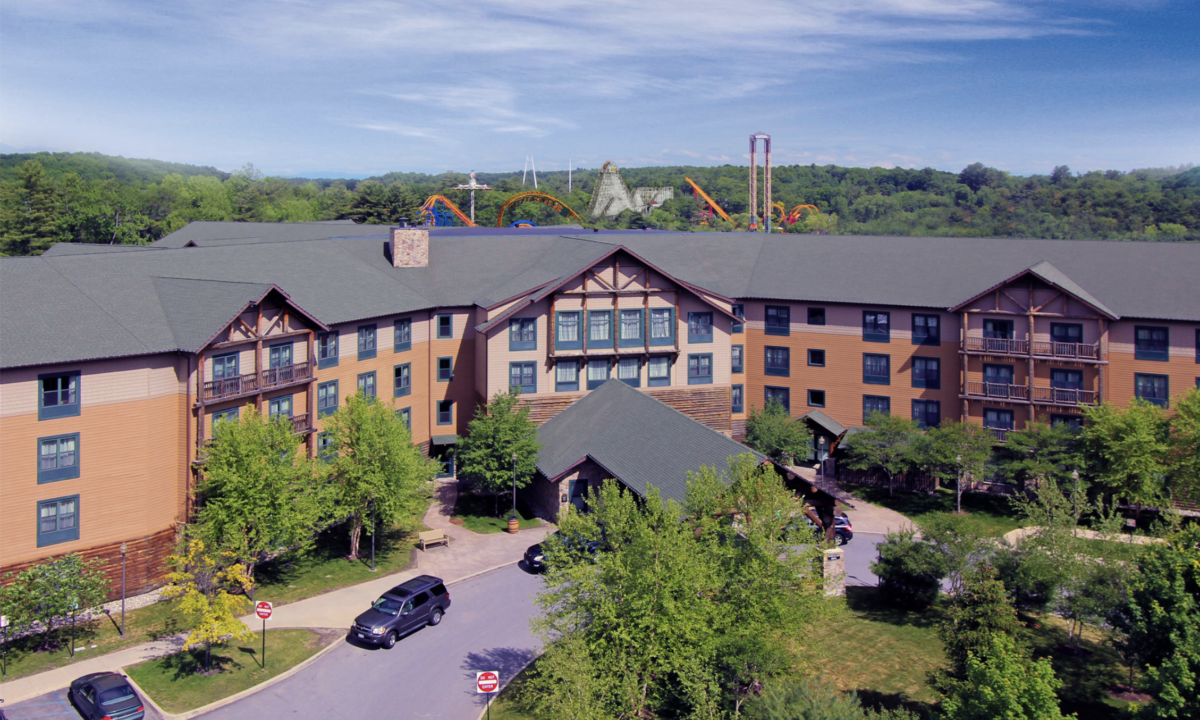 So, is it necessary to spend three days at Great Escape? No. Almost certainly not. However, it’s worth it if you are looking to truly be immersed in the charm of the park and of the surrounding area. So this summer, instead of opting for an extensive, crowded trip to a busy park near a big city, consider spending some time at the hidden gem of the Adironacks, you’ll be glad you did.

If you’ve visited Six Flags Great Escape before, let us know about your experience in the comments below. And if you haven’t, what are you looking forward to most about visiting?

Photos in this article come from sixflags.com, lakegeorge.com, this incredible walkthrough video from Jay Ducharme, and other sources.