Universal’s Attraction Assistance Pass (AAP) is intended for guests with a cognitive or physical disability or other condition that prevents them from being able to wait in the regular standby lines. It’s similar to Disney’s Disability Access Service (DAS) accommodations. AAPs are assigned on a case-by-case basis by going to a Guest Relations office and talking with a team member about what options are available to meet your specific needs. A doctor’s note is not legally required but it doesn’t hurt to bring one along as long as you’re OK with sharing that information. You do have to state your case and explain why you need the AAP.

To respect the privacy of my family I won’t go into detail on our specific diagnosis, however, I will share that one of my children struggles with sensory processing along with a few other issues that make waiting in long and overcrowded lines a very difficult, overwhelming, and often emotional experience. A few years ago, we took a family trip to Walt Disney World before we were aware of the DAS pass, and that trip was laden with tears and sensory overload to the point of making themselves sick. As you can imagine, this was humiliating for my child and put a damper on what should have been a wonderful, “core memory” trip. Thanks to the Facebook group, Tips for Special Needs at Disney  (where tips for Disneyland, Disney Cruise Line, Universal Studios, SeaWorld, Legoland, and other destinations are also shared) we became aware of these programs and it has improved our theme park experiences immensely! 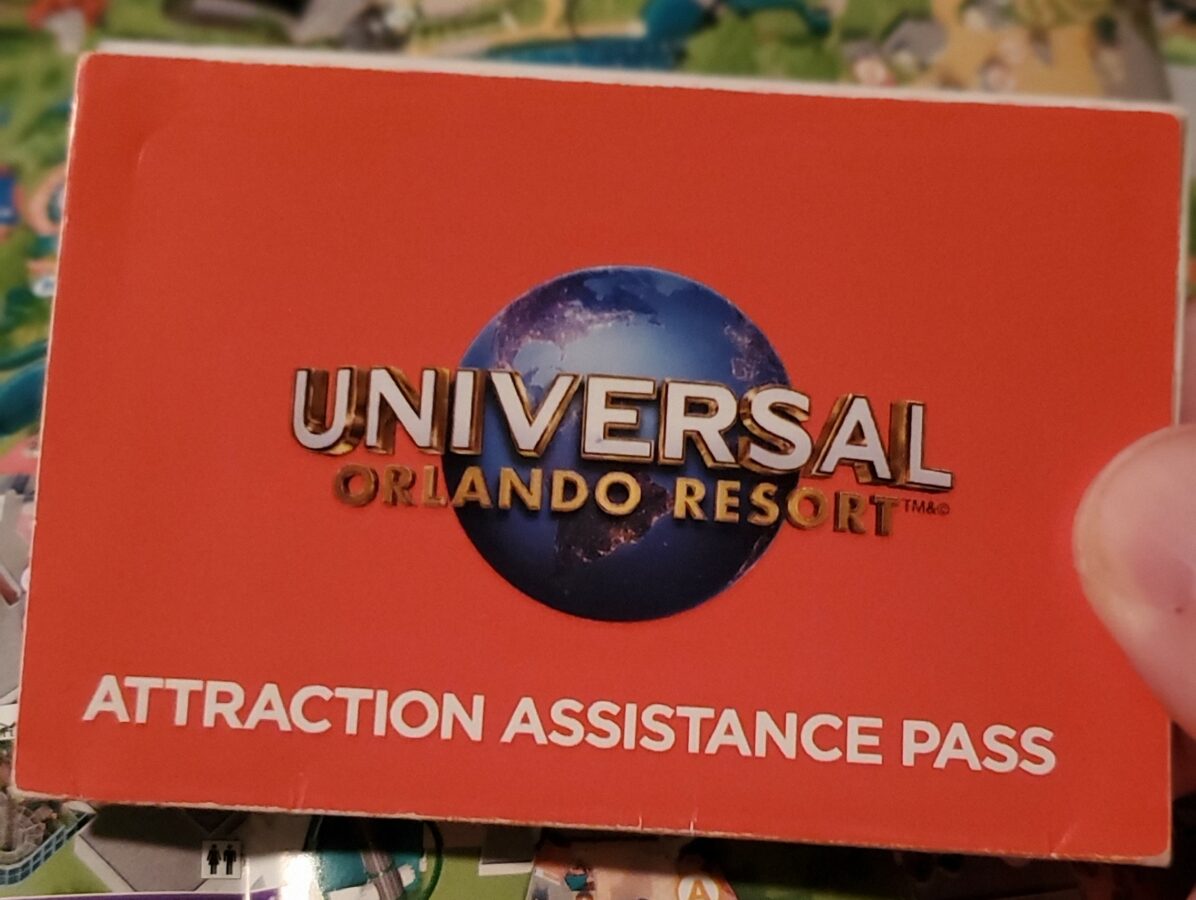 How the AAP works at Universal Orlando

As far as I know, AAP is not able to be reserved in advance, so get to the park early to beat the line at Guest Relations. You can use the Universal Orlando app to easily find guest service locations (under the Menu scroll down to Guest Services, expand it, then select Guest Service Locations. We only had to go to guest services once, as our AAP was good for all four days of our vacation. Party size is limited to five guests plus the AAP holder. 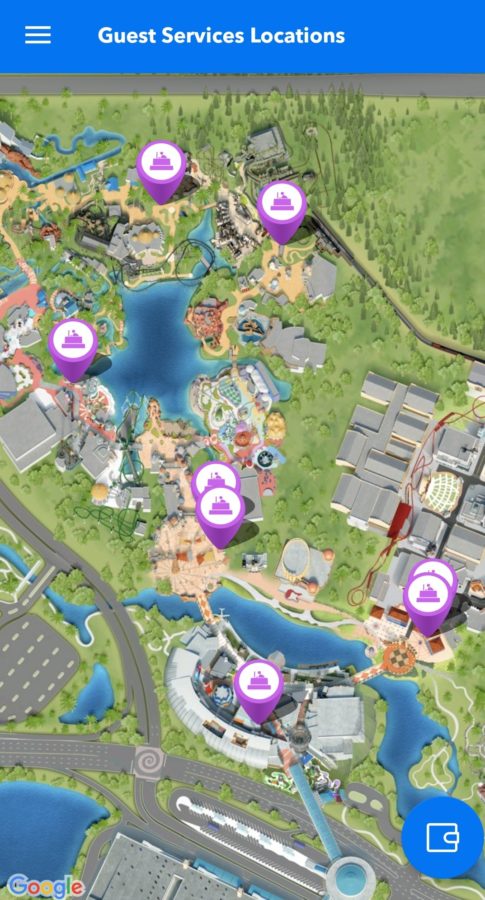 To use the AAP, approach the Team Member (TM) at the entrance to an attraction. If the posted wait time is under 30 minutes, they’ll scan your pass and you’ll join the Universal Express queue (a separate line used for Universal’s “Fastpass” style pay-to-skip the lines system). If the standby line is longer than 30 minutes, you’ll be given a return time. You can come back to the attraction any time after your return time (so no, it’s not a return window as there’s no end deadline as long as it is before the park closes for the day). Once you return to the attraction, you will still have to wait in however long the Express line is at that point. 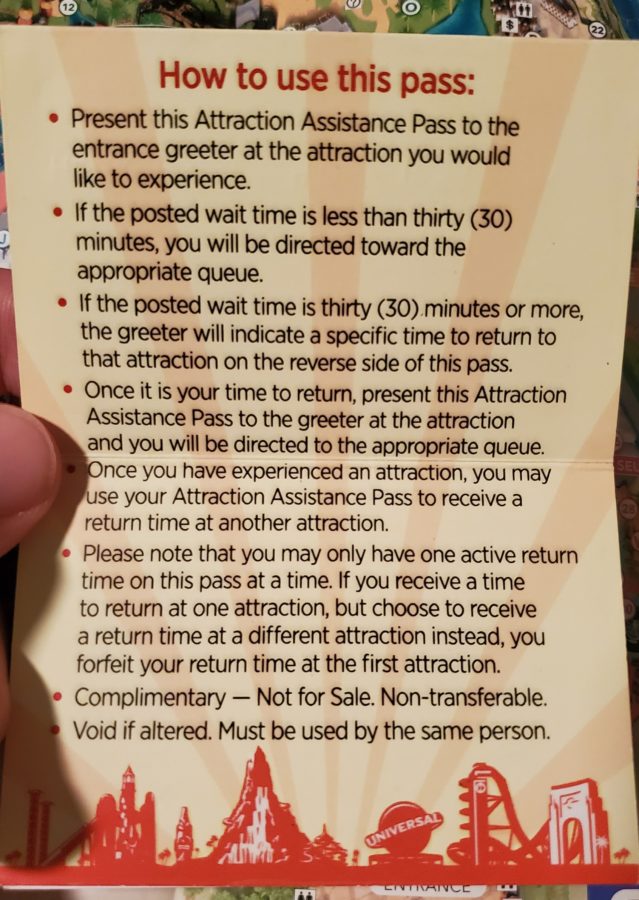 You can only have one return time for an attraction at a time. If you have a return time, you can still use the pass for Express lane access for any attraction with a wait time of less than 30 minutes. If it sounds complicated, don’t worry, it’s not once you get the hang of it. 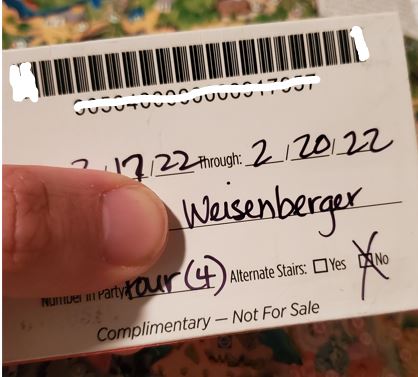 Why Use AAP? Here are the benefits of using the AAP

The biggest benefit of being able to use AAP was not having to stand in the hours-long queues for several attractions that currently do not have an Express line. We wouldn’t have been able to experience these three attractions without the AAP:

Ollivanders in Hogsmeade: we approached the line within the first half hour of early park admission. While the number of guests already in the queue appeared small, the TM informed us it was already an hour and fifteen minute wait due to the low capacity of the show and wand shop. So I brought out our AAP and we were immediately walked to the front of the line and brought in to the next show. I’m not sure if this is normal as this was the only attraction with a long line where we weren’t given a return time. It was also the only time I felt uncomfortable using the pass as the entire queue could see us skipping in front of them. To answer one question you might have, yes, the AAP can be used during Early Park Admission.

Pteranodon Flyers is probably the lowest capacity ride in the entire resort, thus it consistently had 90 minute waits throughout the duration of our trip.  We were given a return time but since there is no Express lane we were escorted by a TM up the exit ramp and boarded from there after waiting a few minutes. 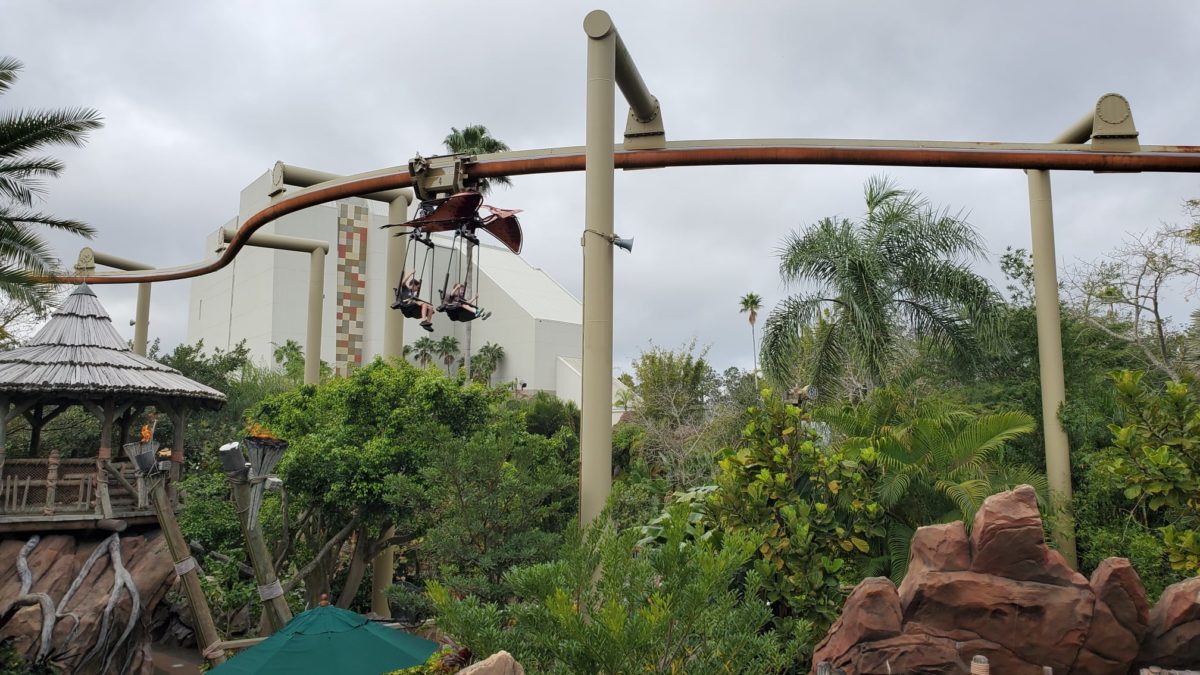 Hagrid’s Magical Creature Motorbike Adventure is the most popular ride at Universal Orlando due to the thrilling yet family-friendly (48 inch height requirement) nature of the attraction. The coaster wasn’t open during Early Entry but that didn’t stop people from lining up for it. Once the park opened, the wait time would immediately sky rocket, as high as 210 min during our trip. We used the AAP and were given a return time. Since the return time was usually 1-2 hours later and lines were so long we couldn’t use the pass elsewhere, we used this time to return to our hotel, relax, swim, nap, eat lunch, recharge, then return to the park for our ride. We walked up the single rider line (which I don’t think was being used for single riders) but still had to wait ~15 minutes to get on. 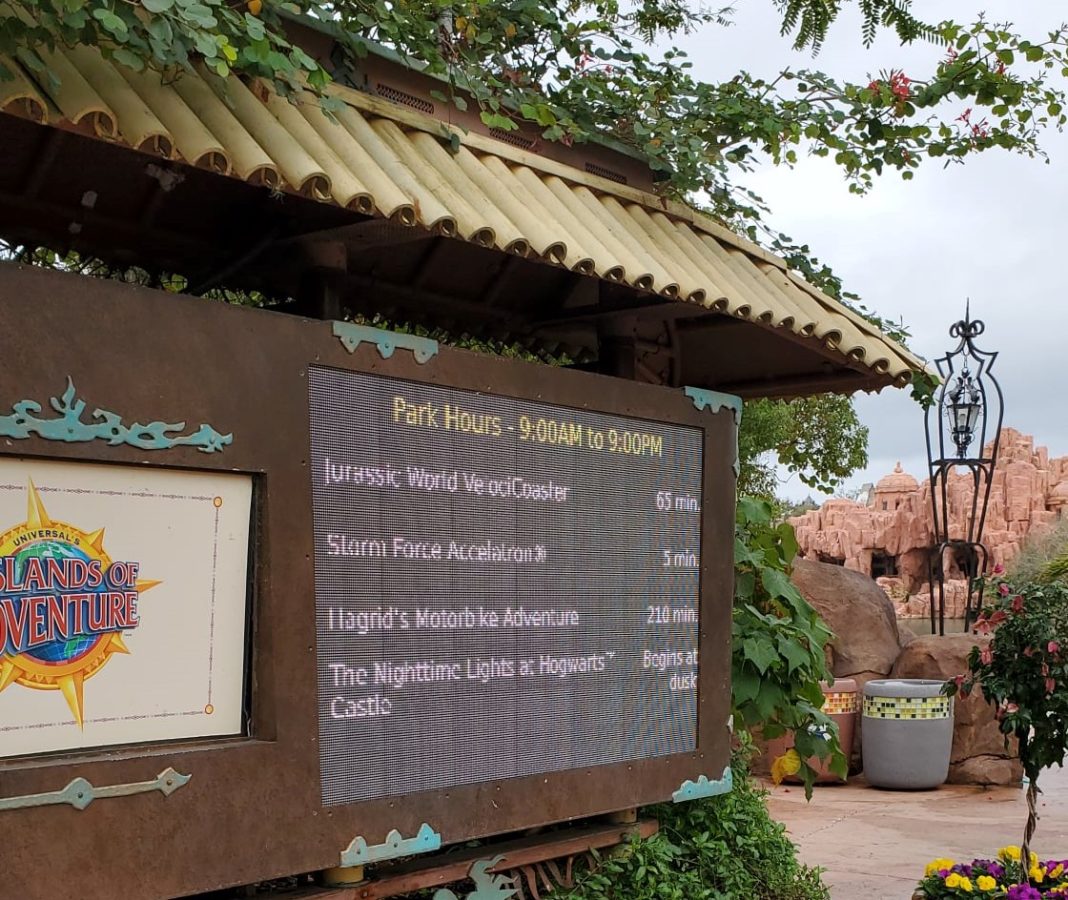 Express vs AAP: Do You Need Both?

The main purpose of the AAP is to avoid the difficulties waiting in the physical line presents, not to skip lines just to save time. Saving time is *sometimes* a secondary benefit of the AAP, but only if the lines are shorter anyways. If you can afford it, the regular Express passes will get you on rides faster and more frequently than the AAP pass will, especially on busy days when all the waiting times are over 30 minutes.

For example, Flight of the Hippogriff, which was running at reduced capacity as the second train hadn’t returned from refurbishment yet, had a forty-five minute wait shortly after the park opened. Using the AAP, we got a return time to come back in twenty-five minutes. When we returned, the standby line was now posted at 75 minutes. We joined the Express line, which the team member said should be about half the time of the standby line. We ended up waiting in line for 55 minutes before riding. Overall, we essentially had to wait an hour and twenty minutes to ride, nearly double the original posted wait time. Luckily, this was early in the morning when the medicine works the best so we didn’t have any major issues. If we had had regular Express passes, we could have hopped in the Express line immediately when the physical wait was shorter. 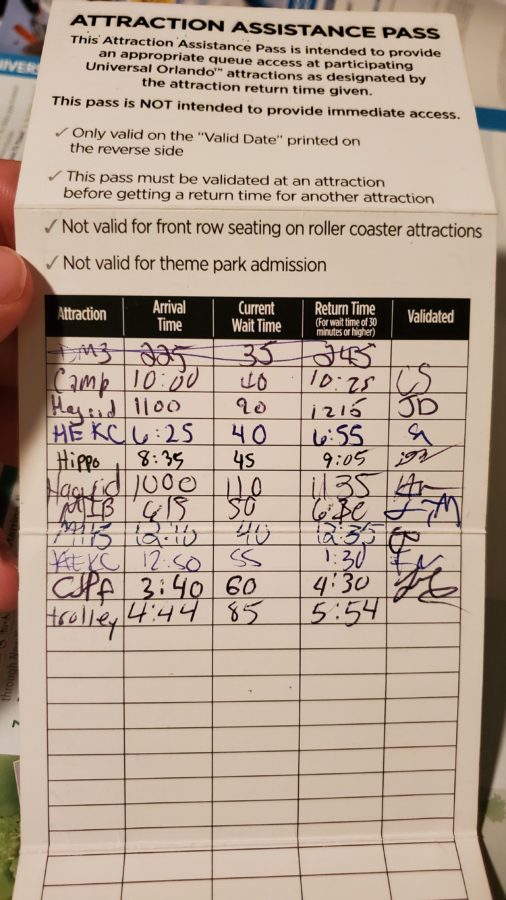 I debated writing this article due to the personal subject matter, but decided that if this article helps even one family to enjoy a trip they otherwise thought impossible or too overwhelming, then this article has served its purpose. I hope by sharing our experience it gives realistic expectations to those who plan on using the AAP. It goes without saying, you should only use the AAP program if you or your loved one truly needs it. When programs like the AAP or DAS become frequently abused, it hurts those who truly need it. We would gladly exchange some of my child’s life-long challenges and wait in a few long lines, however that is not an option for us. Using the AAP greatly improved the quality of our vacation and we’re thankful to Universal for maintaining this program for families like mine. 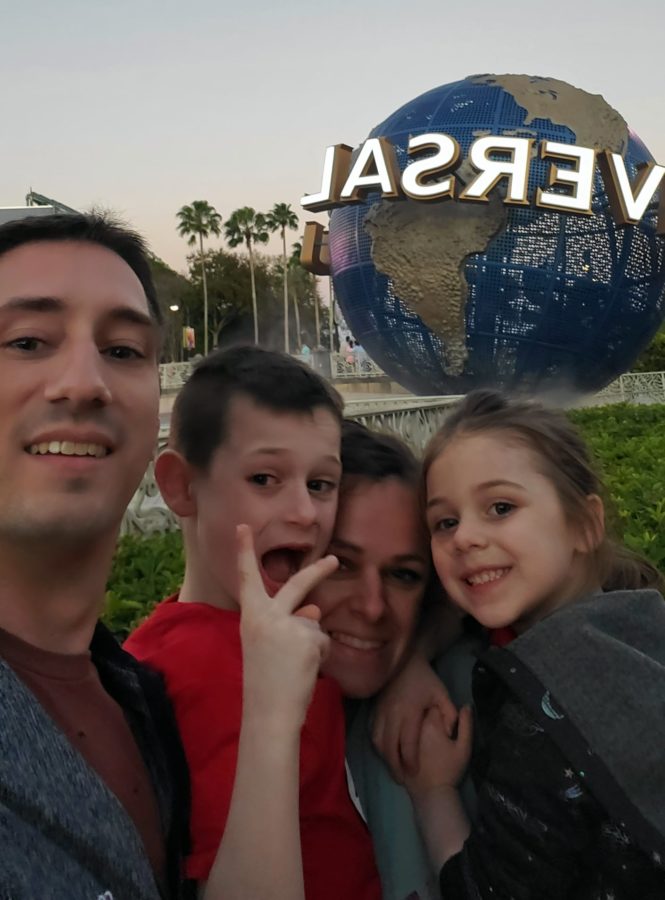