There’s something huge happening this weekend. No, it’s not the opening of Iron Gwazi, though it’s pretty amazing. No, this weekend, the Cincinnati Bengals take on the Los Angeles Rams inside of Los Angeles’ SoFi Stadium in the big game, which for legal reasons we’re not actually allowed to name? Let’s call it the Superb Owl. It’ll be a hoot. This year’s big game is unique for theme park fans, because the closest parks to the participating teams are owned by the same company – Cedar Fair. Sunday’s game will be a “home” game for the Rams, who play their home games just about 35 minutes from Knott’s Berry Farm, while the Bengals home field at Paul Brown stadium is less than half an hour from Kings Island. While we haven’t seen a true “theme park sports bet” on the game from either park, we wanted to have a little bit of fun.

Many people tune into Sunday’s game for the commercials (which somehow end up on YouTube the week prior to the game, which doesn’t make sense) or halftime entertainment (highlighted this year by Dr. Dre, Eminem, and Snoop Dogg!) but what if people tuned in, looking for comparisons between the participating players and attractions at the parks closest to the respective teams? I’m not sure anyone thinks in this manner, but just in case, we’ll give you a little bit of a primer if you’re tuning into a football game for the first time this season! 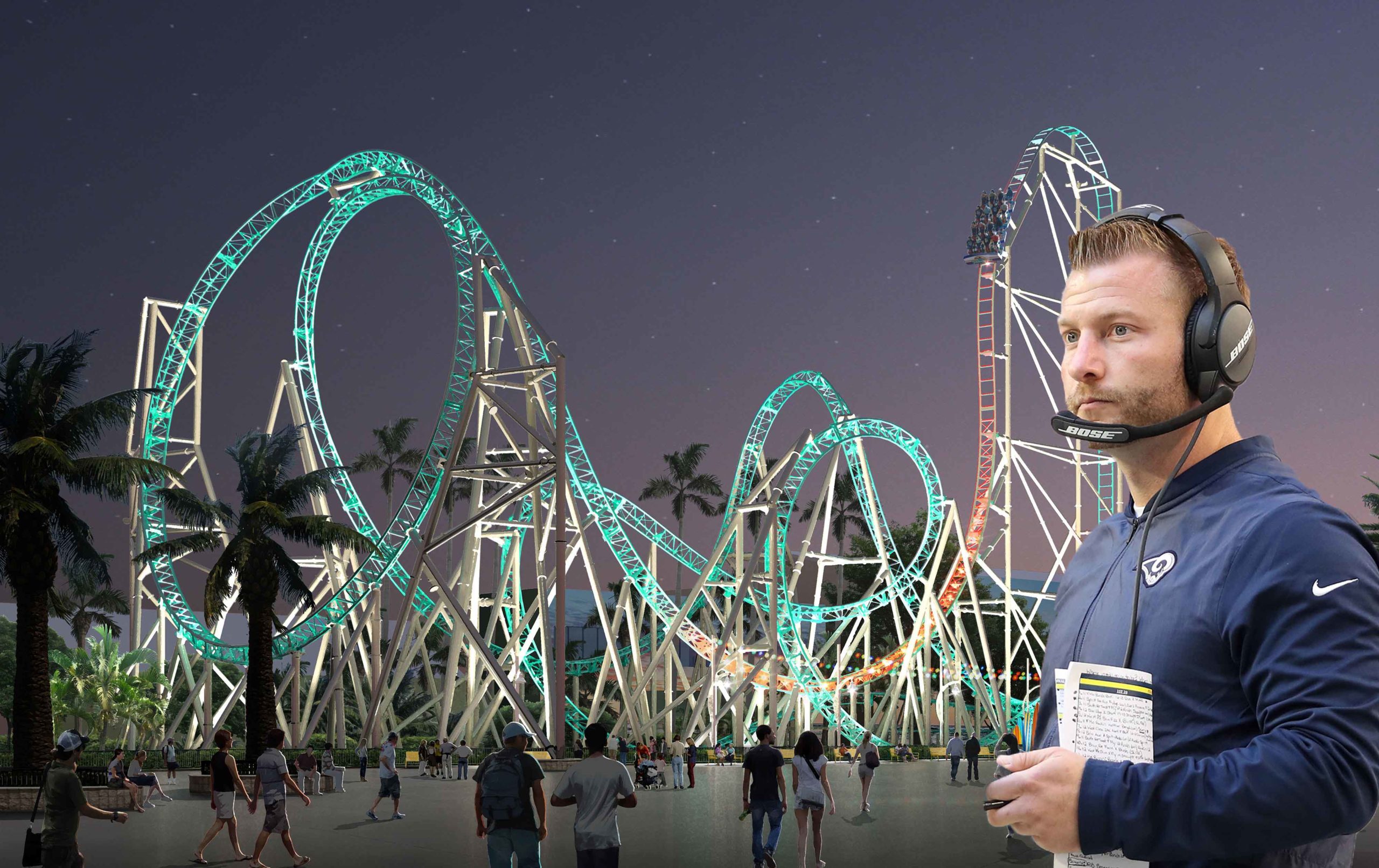 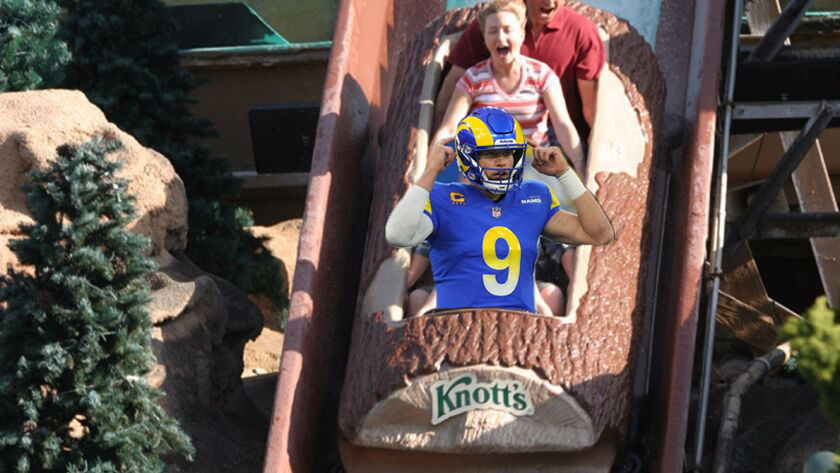 An “elder statesman” of sorts on the Rams roster with 13 years of NFL Experience, Stafford spent the first 12 seasons of his career in Detroit, where he played in just three total playoff games. However, with a change of scenery, Stafford’s career has seen new levels of excitement, not unlike the new “scenery” added to Timber Mountain Log Ride in recent years breathed new life into another attraction with “Senior Status.” Let’s hope his receivers don’t have any major “drops” during the Superb Owl!

Don’t let Cooper Kupp’s small school background (he was a third round draft pick out of Eastern Washington, a school not known for producing NFL talent) fool you. He is a force to be reckoned with on the gridiron. Leading the NFL in both receiving yards and receiving touchdowns by wide margins in 2021, Kupp has proven that exciting things can come in “small” packages, much like Silver Bullet’s 109′ first drop produces enough excitement to power riders through 6 inversions at speeds of 55mph. 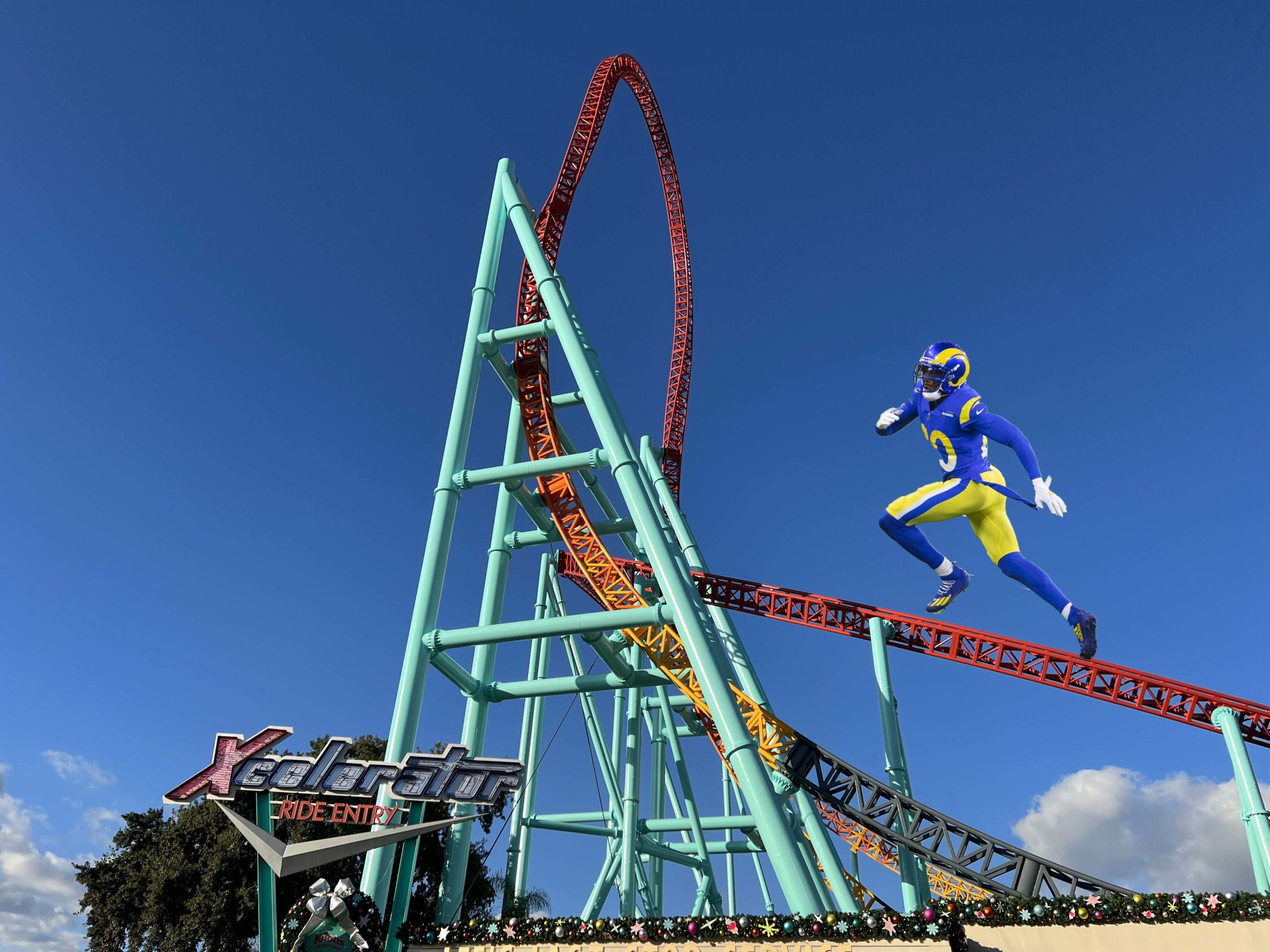 Ramsey and XCelerator are both known for their blazing speed. Ramsey was a decorated track star in college and high school, earning all-ACC honors at Florida State as a member of the conference champion 4×100 relay track team (in addition to his football accolades) in 2013. Much like Xcelerator’s launch goes vertical and comes back down, if you throw the ball up to a receiver under Ramsey’s defensive coverage, there’s a good chance he’ll come down with it. His four interceptions in 2021 were tied for 12th-most in the NFL this season.

You want to talk about “Horsepower?” Aaron Donald is 6’1, 284 lbs, and in 2014, ran the 40-yard-dash at the 2014 NFL combine in 4.68 seconds, which at the time was an all-time record for defensive linemen. With that speed, Donald is able to launch from his position on the defensive line towards opposing quarterbacks, resulting in a quick, but very imposing presence. His 12.5 sacks were tied for 7th in the NFL in 2021.

Much like Ghost Rider’s year-long refurbishment by Great Coasters International in 2015-2016, Von Miller’s 2020 season, which the linebacker missed due to an ankle injury, allowed him to come back and better than ever, regaining his title as one of the NFL’s best linebackers. Spending a majority of his career in Denver before coming to the Rams in a midseason trade this year, Miller’s late-season resurgence has assured that the Rams defense has strong senior leadership that is refreshed, and is better than ever. 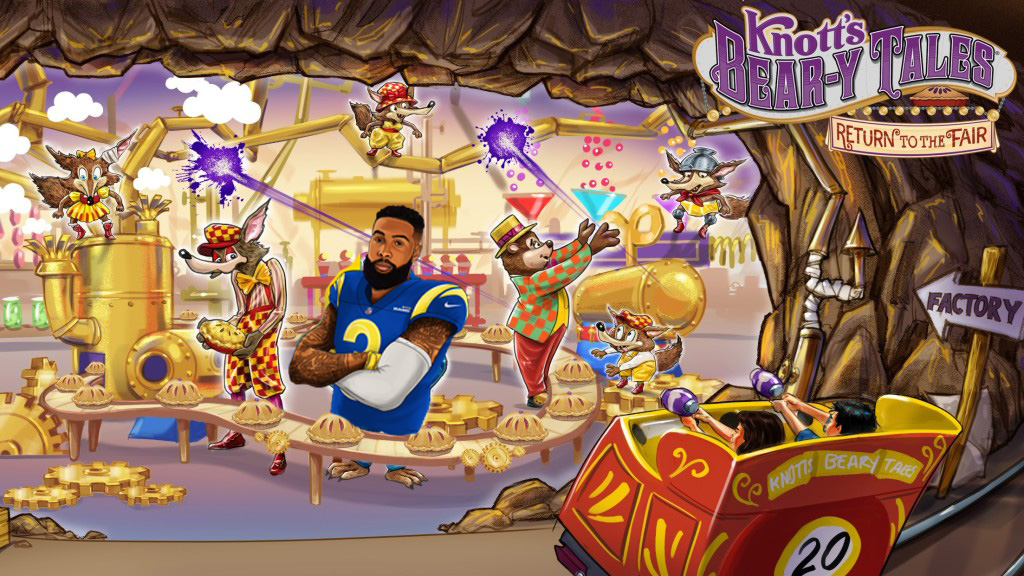 During “OBJ’s” early career with the New York Giants, he was a league and fan favorite, recording more than 1,300 receiving yards and 10 touchdowns during each of his first three seasons in the NFL. Then, after a trade to Cleveland and a series of injuries, he seemed to effectively “vanish” for a few years. After his trade to the Rams this year, it’s clear, based on his playoff statistics, that OBJ is back and better than ever. A fan favorite that was gone for a few years, came back, and is better than ever? Sounds a lot like Knott’s Bear-y Tales: Return to the Fair to me!

With 16-years’ worth of NFL Experience, the 40-year-old Whitworth has the most experience under his belt heading into this year’s Superb Owl. He’s considered Los Angeles’ best offensive lineman, despite his age. (This isn’t meant to be ageist. Not a lot of NFL players play into their 40s!) Knott’s oldest attraction, the Calico Mine Ride also has more “experience” than any other attraction at the park, and is constantly thought of as one of the most notable dark rides in the United States. There’s a chance Sunday’s Superb Owl.

Many NFL teams have one stand-out running back who leads their ground attack. However, with the activation of Darrell Henderson, Jr. off of injured reserve, the Rams have three very viable options to run the ball out of their backfield. The “three-headed” rushing attack closely mimics Knott’s Supreme Scream triple launch tower from S&S Worldwide. The good news is, if one of the towers isn’t operating, at least you have the other two. Here’s hoping that the Rams don’t need to rely on two of their three running backs due to injury! 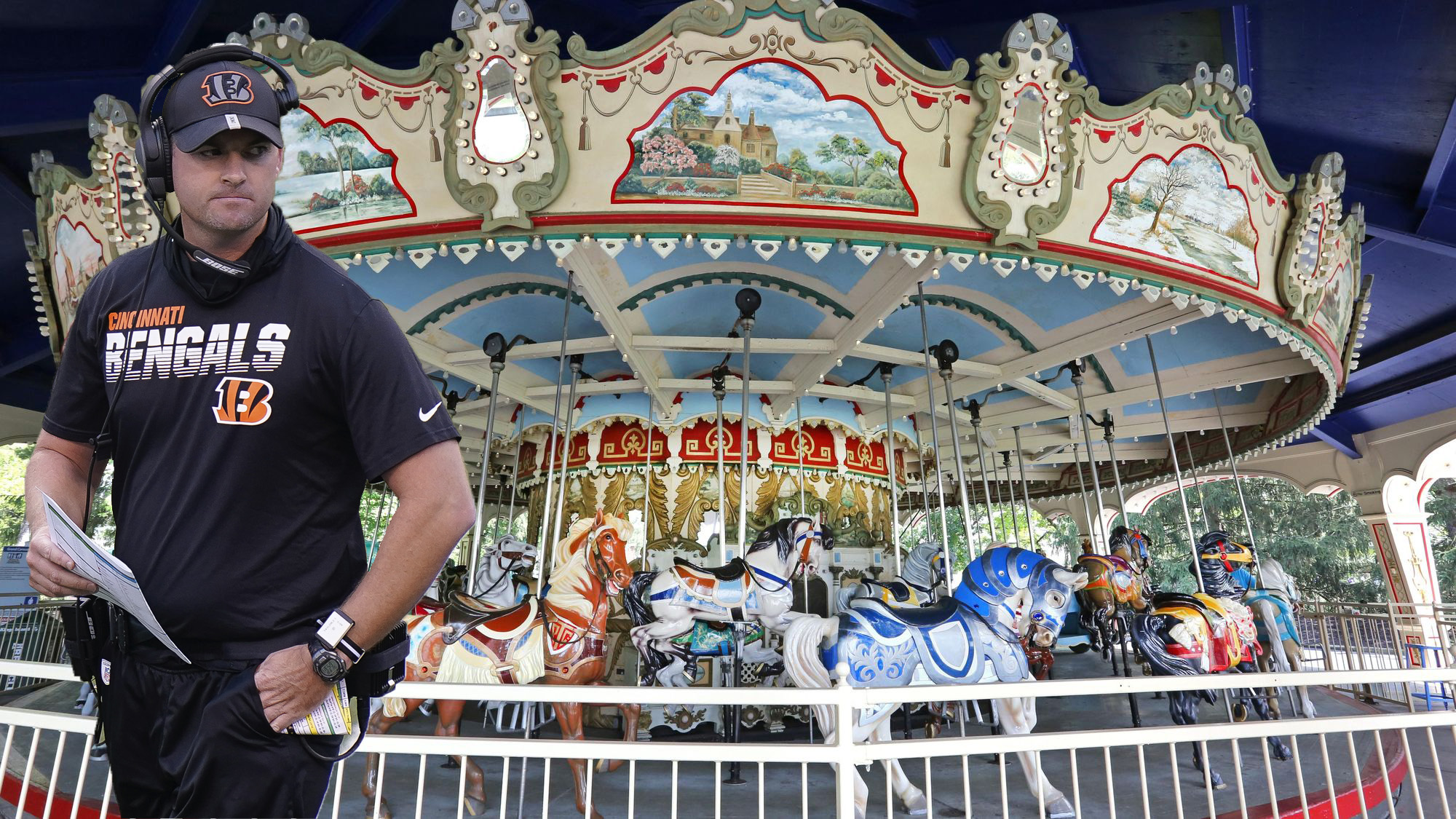 In 2016, Zac Taylor was the Offensive Coordinator for the University of Cincinnati, before taking another job (ironically with the Rams) for a few years, but returning to Cincinnati in a completely different capacity, as head coach for the Bengals in 2019. The Cincinnati-Cincinnati relocation isn’t a new concept, as a number of rides, including Kings Island’s historic PTC Grand Carousel, were moved the 30 miles north from Coney Island to Kings Island prior to the park’s opening in 1972.

Both coming onto the scene in 2020, both Burrow and Orion are the “star” attractions in their respective lineups. In Burrow’s 16 appearances this regular season, he averaged just over 288 passing yards per game, incredibly close to Orion’s 287′ tall height. Another fun fact, “Joe Cool” and Orion both were slated for greatness elsewhere before landing in their current situations. Burrow originally played for Ohio State University, before transferring to Louisiana State University (LSU), winning the Heisman Trophy and National Championship for the Tigers, while in the coaster world, Orion was originally slated for California’s Great America, before eventually being built at Kings Island. Side note: We could have gone with Joe Cool’s driving school, but thought that was too easy! 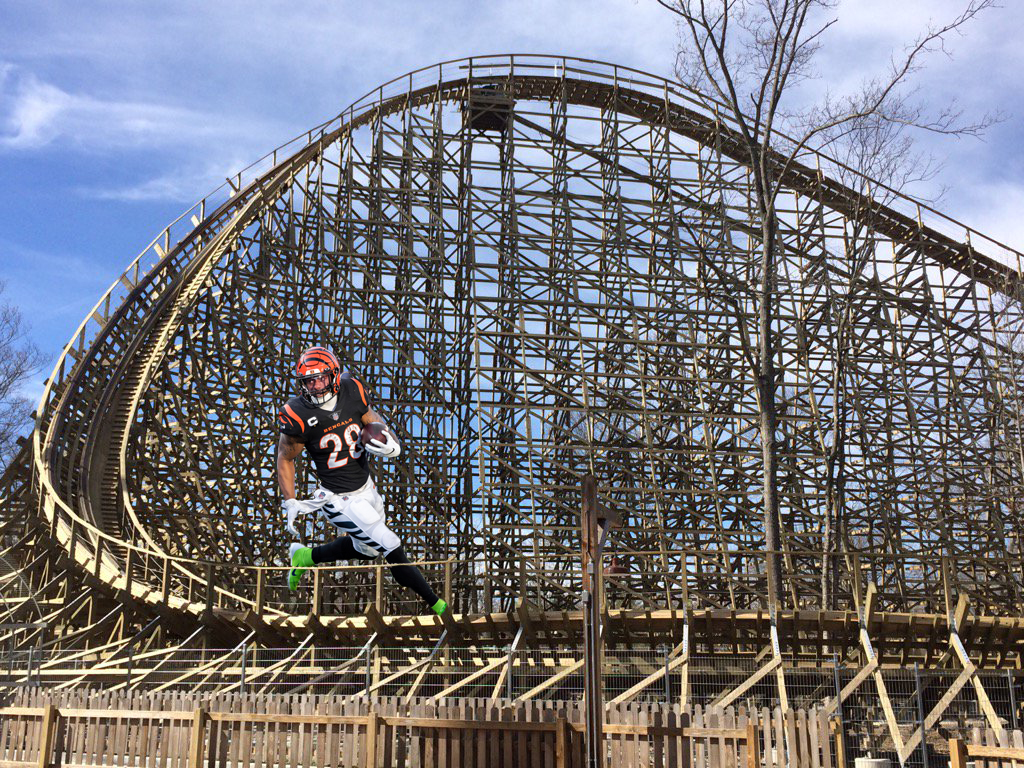 While Kings Island is known primarily for their wooden coasters, only one spends a good amount of time close to the ground, utilizing the terrain – and that’s the GCI-designed Mystic Timbers. The Bengals’ Joe Mixon rushed for over 1,200 yards this past season, averaging just over four yards per carry, giving new meaning to the phrase “ground and pound.” Mixon also gained 62% of his yards after contact this season, clearly meaning he was able to “shed” plenty of would-be tacklers coming his way.

The true “Beast” of Cincinnati’s receiving corps is Chase, who led the team this season in catches, yards, and receiving touchdowns. In an offense with many options, Chase, the NFL’s offensive rookie of the year, proved himself as one of the best in the NFL. The jury is still out if he’s as good at night as The Beast, playing only one true “night” game this season (where he had a very respectable 77 yards on 6 catches). While the Superb Owl will take place at 3:30pm local time, we’ll have to see if the nighttime performances will live up to his namesake. 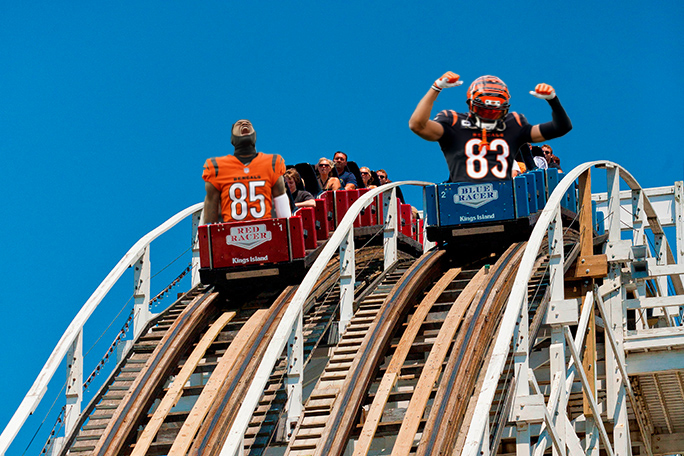 After Chase, Burrow’s two other favorite receivers are Higgins and Boyd. Both products of the Atlantic Coast Conference, Higgins’ Clemson Orange (which to me, feels close enough to red, right) and Boyd’s Pittsburgh Blue provide the dynamic duo a comparison to Kings Island’s “dynamic” racing duo in more than just color. While Racer may not get the same recognition as The Beast (Chase) or Mystic Timbers (Mixon), Higgins and Boyd’s combined 11 touchdowns and nearly 2,000 receiving yards are as important to the Bengals’ playoff run this season as the Racer is to overall Kings Island history.

Less of a comparison to the roller coaster itself, and more to its namesake and trains, Hendrickson was often able to “slither” into opposing backfields and rattle the opposing quarterback, securing 27 QB hits, four fourced fumbles, and 14 sacks on the season, good for 5th best in the NFL. The Rams might need to find a pool of water in SoFi Stadium if they hope to put the brakes on Hendrickson during Sunday’s Superb Owl.

Despite only playing in 13 of the Bengals’ 17 games this season, Wilson was the team leader in tackles (100) and interceptions (4). While the Banshee’s scream may signify impending doom, Wilson is all over the field wreaking havoc and creating his own version doom for opposing offenses. His second season was a vast improvement statistically over his first, and with 43 assisted tackles in 2021, he’s proven to be a reliable, just like the Banshee has proven to be a much more reliable replacement in its current footprint than its previous tenant, Son of Beast. 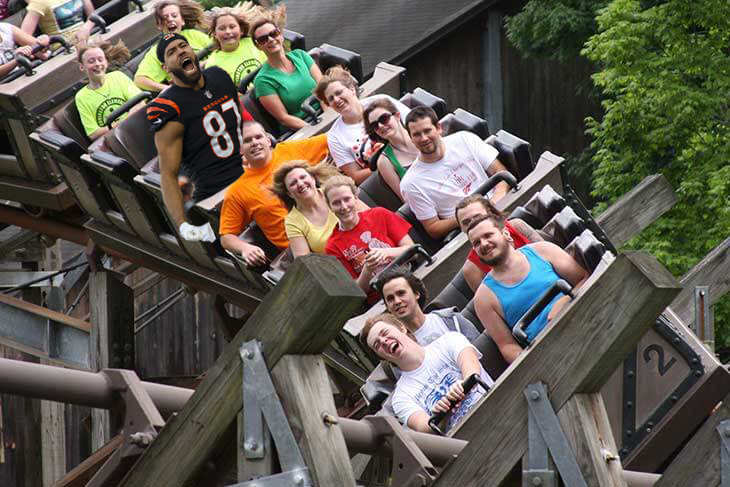 Not often mentioned in the list of the NFL’s best tight ends, Uzomah has quietly put together a solid playoff effort this season, with 13 catches for 135 over the Bengals three postseason games. While he isn’t the first (or second or third) offensive option for the Bengals, he is always a sneaky threat to have a good performance. I wouldn’t quite call him the “sleeper” of the Cincy offense like I would call Adventure Express the “sleeper hit” of Kings Island’s roller coasters, but I will say that if Uzomah plays in the Superb Owl(he’s currently listed as questionable on the injury report), he has the potential to really surprise people. (Not unlike the finale of Adventure Express!)

The Superb Owl airs live on Sunday at 6:30pm Eastern on NBC. We just hope that both teams have fun, and we’ll probably be thinking about roller coasters in between commercials and that halftime performance!