Niagara Amusement Park and Splash World announced today they will be the new home of a classic Schwarzkopf shuttle looping coaster complete with flywheel launch. The coaster began life as the Laser Loop at Kennywood and operated from 1980 to 1990. After the ride was removed from Kennywood, it reappeared at La Feria Chapultepec Magico in Mexico City, Mexico where it operated as Cascabel from 1994 to 2019.

It’s good to see the Grand Island, New York park adding attractions just two years after it seemed like it would be gone forever. On February 19, 2020, Apex Parks Group announced Fantasy Island, as it was previously known, was to be permanently closed. In stepped Gene Staples, the savior of Indiana Beach, and entered a long-term agreement to lease the property from STORE Capital in May 2021. In addition to Indiana Beach, which is getting their own relocated Schwarzkopf coaster, Staples also owns and operates Clementon Park. 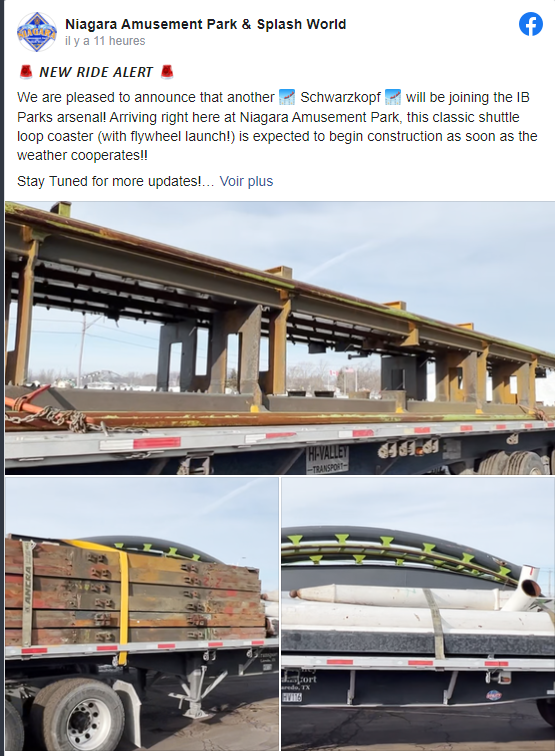 The unnamed coaster is approximately 870 feet long, 139 feet tall, and will hit a top speed of 54 miles per hour.

With Montezooma’s Revenge at Knott’s Berry Farm being temporarily shuttered for refurbishment, this could be the only operating flywheel launch coaster left in North America this year. Flywheel launchers utilize a large flywheel (a device used to store rotational energy) that is spun at high speeds (1,000 revolutions per minute) and is attached to a cable that propels the train forward. Learn more about roller coaster launch systems here.

The park says the coaster will begin construction as soon as the weather cooperates. Niagara Amusement Park has not yet announced when they are opening for the 2022 season but you can check their website for the latest information.

Are you excited for a chance to ride a classic Schwarzkopf shuttle looping coaster? Let us know in the comments below!