Believe it or not, we have finally reached the end of the roller coaster of a year that was 2021. It was another strange, pandemic filled year where things seemed to get better, get worse, get better, get worse again. Thankfully, most of us were able to get back to going to more parks than we did in 2020. As we do every year, we’re going to take a look back and discuss our favorite coaster highlights of 2021. 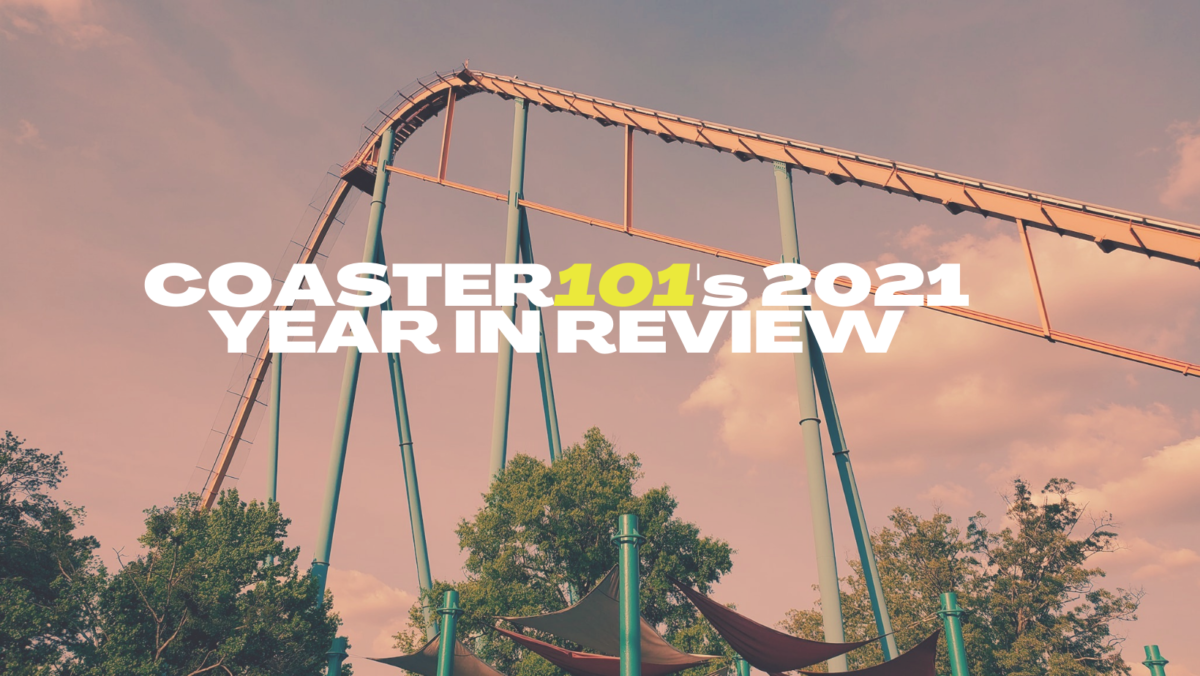 Favorite “New to You” Ride of 2021: Mystic Timbers, hands down. We had a fireworks night ride during Coasterstock that was borderline life-changing. 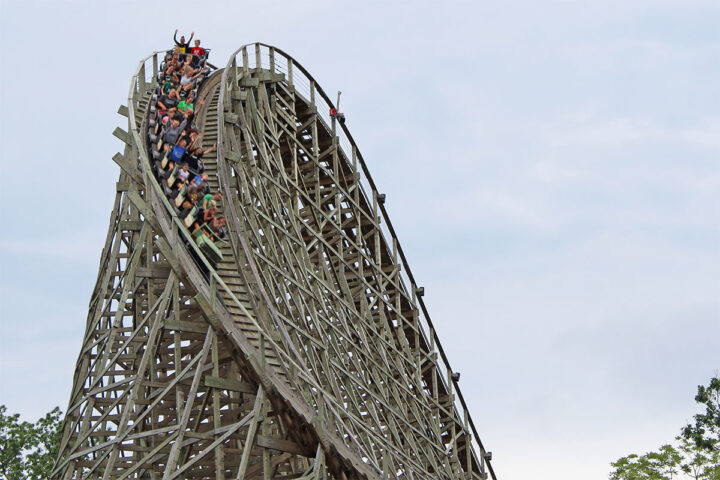 Runner Up: A sleeper pick here, but I thought Teddy Bear at Stricker’s Grove was a TON of fun.

I think this year was the year with the most-ever content on Coaster101, which is awesome, but makes this very difficult. I’m going to DQ anything I wrote as one of my favorites, though the infamous Twitter List was fun. One of my favorites from everyone this year: Shane’s whirlwind trip to the IAAPA Show Floor. Nick’s Brick-By-Brick Review of LEGOLAND New York (and the ensuing podcast!). John’s trip to the Walt Disney Archives. Eric’s ride on “Little Thunder.” Kyle setting the internet ablaze with his Thunderhead & Lightning Rod comparisons.

Runner Up: West Coast Racers was a surprise hit of my visit to Six Flags Magic Mountain. The pacing was great and I loved how the racing trains interacted throughout the course of the ride. The theming is surprisingly impressive for a Six Flags park. 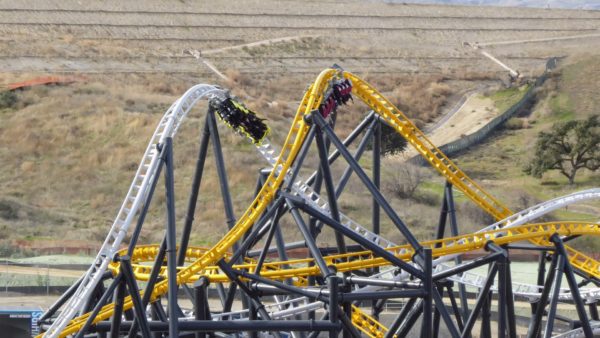 Does West Coast Racers count as a 2020 opening?

Another year, another tough ask. The team published some amazing content this year. I’m a sucker for backyard roller coasters, so Eric’s feature of the Little Thunder coaster was a standout. As someone who has for several years now enjoyed the campiness and old-timey nature of Lake Winnie, I really enjoyed reading Nick’s fresh take on the quirky amusement park. I was a train fanatic as a kid (and still am to an extent), so I also enjoyed Nick’s list of the 12 best theme park steam trains in America. Finally, I had no idea Myrtle Beach had such a fascinating history of roller coasters (beyond Hard Rock Park, of course), so I was engrossed in Andrew’s analysis of the coastal city’s coaster past.

Runner Up: WaterWorld at Universal Studios Hollywood. I never understood the hype that surrounded a stunt show about a mediocre 1995 action movie, but holy moly I get it now. It is a must-see production.

New To You Coaster Credits in 2021: I was blessed to have a record year in terms of traveling, new parks, and new coasters. Overall I was able to visit 18 new-to-me parks/FEC’s and that accounted for 66 new credits. Instead of listing all 66, here are my top 10 new-to-me credits of 2021 (in no particular order):

Favorite “New to You” Ride of 2021: My hands-down favorite new credit this year was Mine Blower at Fun Spot Kissimee. It “blew” me away. I was able to ride it 6 times over the course of two evenings and each ride was incredible. There are a lot of good coasters out there but very few that leave you speechless. Mine Blower was one of those rare coasters. From start to finish this ride doesn’t let up, is full of airtime, and absolutely flies through the course (especially at night). The perceived speed as you duck and weave in and out of the structure is just insane.

Runner Up: Twisted Cyclone at Six Flags Over Georgia. It’s like a mini Steel Vengeance. Smooth and relentless.

I really enjoyed being able to write about all of my travels this summer, particularly being able to provide tips for folks thinking about visiting a new park. It’s always nice to be able to tackle a day at a new park with a game plan in mind.

Some of my favorite articles by my fellow team members were: the Legoland Review, Interview with Robert Irvine, and the Defunct Theme Park Trains.

3. Visiting the Florida parks I’ve never been to

New To You Coaster Credits in 2021: 11, including some from a new to me domestic park, a new to me international park, and an oft broken favorite!

Favorite “New to You” Ride of 2021: I guess I’ve got to go with Lightning Rod. I didn’t get a chance to ride the pre-2021 version, and it may have been a little overhyped by some (one) of my Coaster101 colleagues, but it was still really really good. 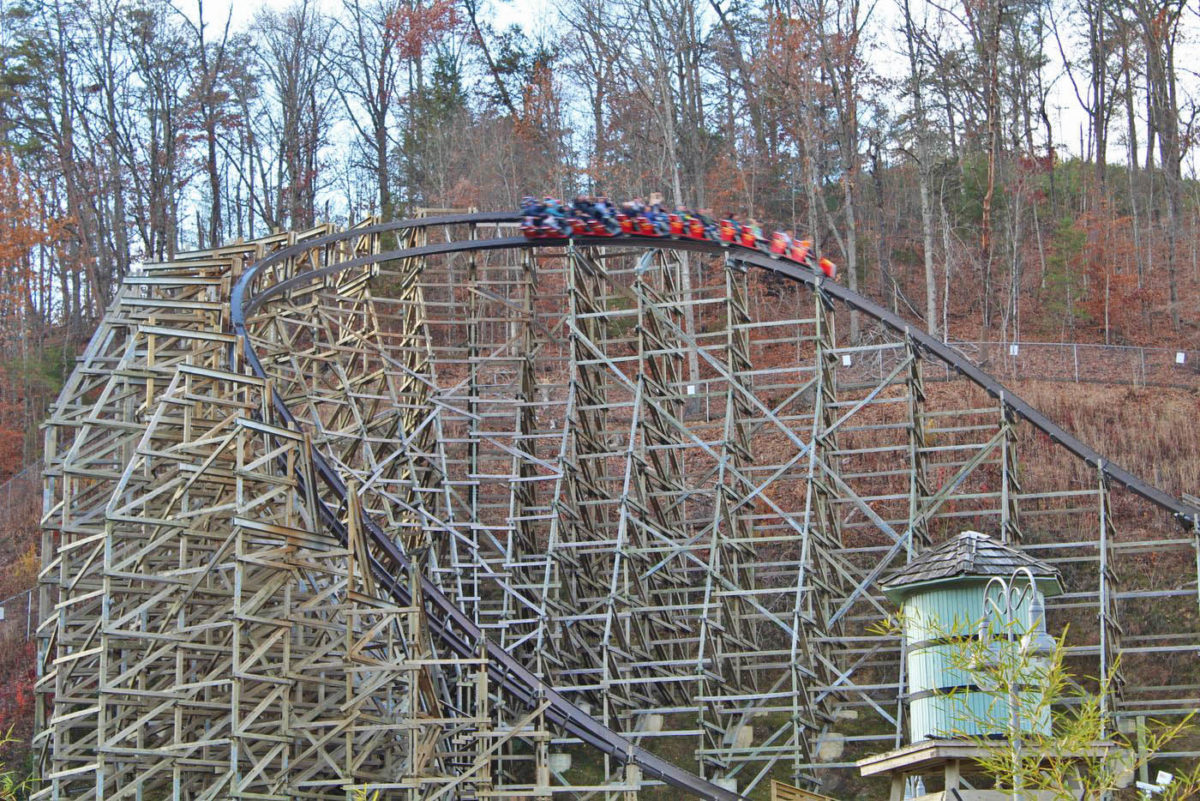 I’m gonna go with a bunch already mentioned. Kyle’s comparison of the Thunderhead and Lightning Rod that I might sort of agree with. Shane’s wrap-up of his whirlwind IAAPA visit that might finally convince me to make the trip. And Andrew’s dive into the history of Myrtle Beach roller coasters. These three really show off the breadth of things we write about and the types of articles that make me like writing for Coaster101.

Favorite “New to You” Ride of 2021: My favorite ride this year was without a doubt Star Wars: Rise of the Resistance. I think I’ve gushed enough at this point about my love of Galaxy’s Edge, but finally getting to step into this land and experience this attraction was a definite highlight. 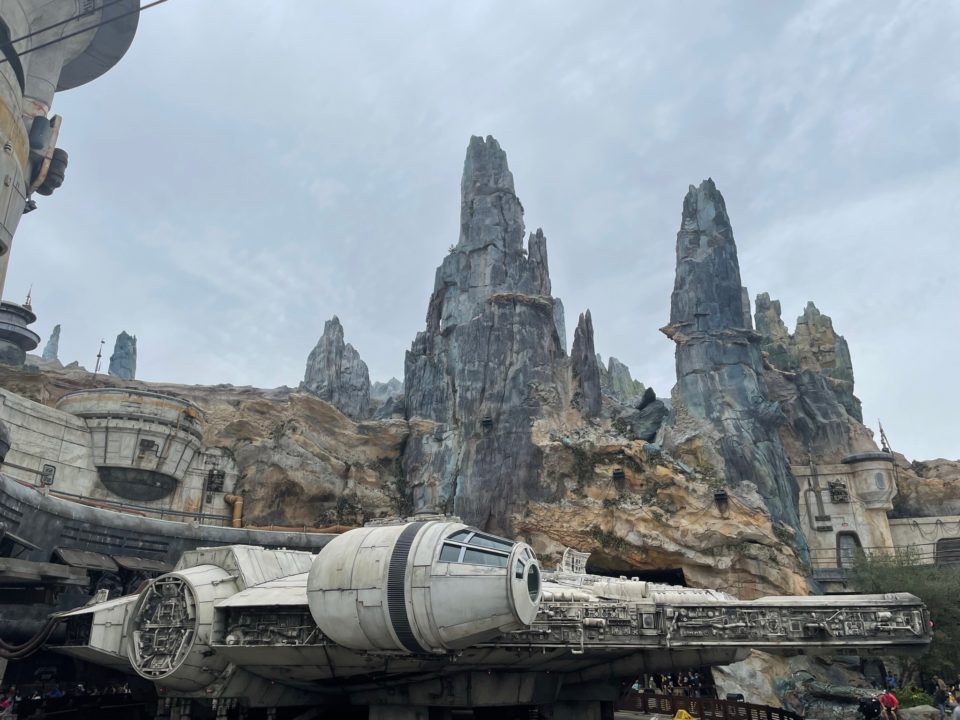 Runners Up: Intimidator 305 and VelociCoaster. I knew Intimidator 305 was going to top my coaster list before I even stepped through the gates because of how much I love Skyrush, and with I305 being the bigger, faster, more intense version, it was everything I hoped it would be and more. VelociCoaster also blew my expectations away, and being a big Jurassic fan, the themed land and queue just added to the experience.

For myself, I really enjoyed making the trip to IAAPA, covering all the nerdy details of Galaxy’s Edge, and ranking the coasters of Great Adventure now that I’ve finally made the trip there.

As many of the other writers have said, I also really loved Nick’s Legoland Hotel Article and his video that went with it. Even though I am a few years above the age demographic, it made me want to make the drive upstate and stay at the hotel myself. His article about Hershey’s Chocolate World was a great read also, since I am a big fan of Hersheypark myself. As someone with an interest in Disney history, John’s trip to the Walt Disney Archives really intrigued me, and seeing all of the neat things on display there made me very jealous.

Kyle’s first time tips for SeaWorld Orlando article was very fitting for me, since I made my first trip to the park this year, and agreed with all of his advice. His Battle of the Busch Gardens article was also a great read, and made me excited to visit Busch Gardens Williamsburg next year. Eric’s coverage of Little Thunder, the coolest backyard coaster ever, was so much fun and also made me wish I could’ve ridden it this year. I always love a good look behind the coaster curtain, so Andrew’s photos of The Beast’s backstage were a huge hit with me, and I couldn’t believe how close he was allowed to get to the ride. And while technically not an article, Andrew has been rocking the Coaster101 Podcast, and had some great guests this year.

This summer was possibly one of the toughest for me so my trips were non-existent but really hoping I can hit up some parks in 2022, especially with some rides that are finally opening up after nearly 2 years…

All of the posts from the guys being able to attend media days and Shane being able to go down and see IAAPA, gave me a bit of nostalgia and really hope next year works out better for me. The Little Thunder post was possibly one of my favorites for the fact a full-on custom home built roller coaster with a pneumatic launch was built by hand.

I’m happy the guys were able to keep up with me being out this summer, but hopefully I can come back and bring out some new pictures for the 2023 calendar next year and also to finally be on the podcast! 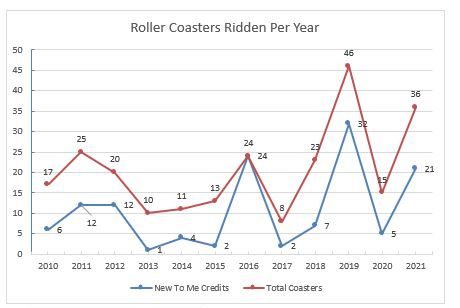 Favorite “New to You” Ride of 2021: My favorite coaster was Twisted Cyclone at Six Flags Over Georgia, which we talked about on the podcast. Favorite non-coaster ride, Lego Factory Adventure. Honorable mention to The Racer at Kings Island. It’d been over ten years since I last rode it and the work Gravity Group put into it was incredible – felt like a brand new ride.

For myself, I loved covering media days for Tidal Twist and Zombiezi Bay. I also enjoyed my in-depth reviews of Legoland Hotel and Legoland New York. I also had a lot of fun researching steam trains and monorails.

For others, I loved reading all Kyle’s articles about his crazy road trips this year. And of course, Andrew killed it with the podcast this year.

#3: Coaster101 Georgia Road Trip – since our original 2020 trip plans to visit Texas were cancelled, it was good to finally be back on the road with the guys visiting parks I’d never been to. Lake Winnie was certainly unique and historic. Six Flags Over Georgia is home to two of the best airtime machines in the country. And I’d always wanted to visit the Georgia Aquarium to see their whale sharks while you still can, so I was very happy to be able to cross that off my bucket list.

#2: Coasterstock at Kings Island – as the others have mentioned and we’ve talked about too much already.

#1: Surprising my kids with a trip to Legoland – we’re huge fans of Lego in my house; it’s what got us through the lockdowns during the height of the pandemic. My kids knew we were going on a trip to Gettysburg and Hershey, but what they didn’t know and what we were somehow able to keep a secret even up until we climbed out of the car in the parking lot, was that we were going to spend two nights at the Legoland Hotel and a day and half exploring America’s newest theme park.

There you have it! It was a busy year for the Coaster101 team but we’re aiming to make 2022 even bigger (more on that soon). Thank you for reading all the way to the end. Now we want to hear from you! How was your 2021 coaster season? Reply in the same format we did in the comments below.