The 1970s were a pivotal time period for roller coasters. Designers pushed the envelope as steel became a more popular track material. Still, the classic wooden coaster remained a staple, with many opening across the country.

I sorted through the list of the 215 1970s-era roller coasters that have since closed to identify the ones that were the biggest losses for coaster fans. 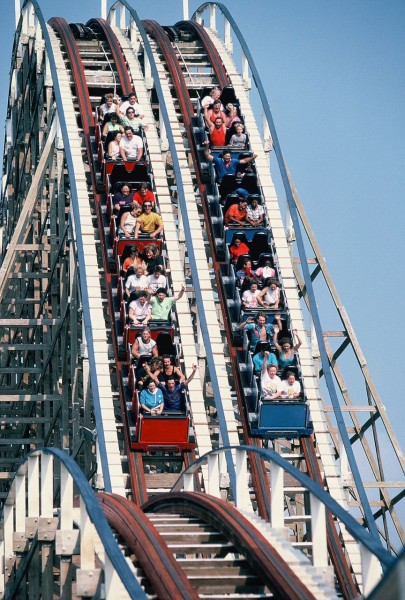 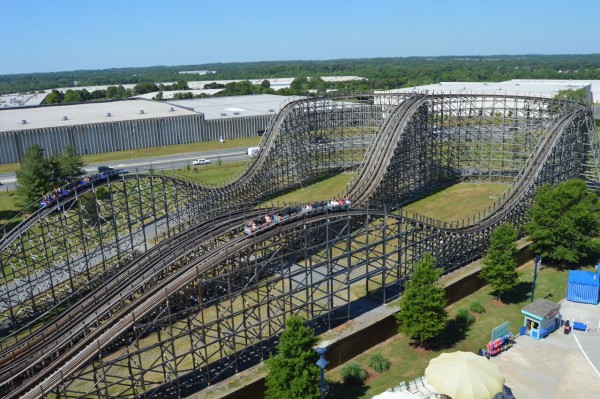 Thunder Road opened at Carowinds in 1976. Designed by Curtis D. Summers and built by Philadelphia Toboggan Coasters, Inc., the racing wooden coaster’s name was derived from the 1958 Robert Mitchum film of the same name, which centered around moonshining in the Carolina mountains. The racing wooden coaster was unique in that it crossed the North Carolina-South Carolina state line.

Carowinds officials announced plans to close Thunder Road in May 2015. The coaster’s last day of operation was July 26, 2015. The following month, Carowinds announced Carolina Harbor, an expansion of its Boomerang Bay waterpark that would occupy part of the former Thunder Road site.

Don’t miss our in-depth look at the history of Thunder Road at Carowinds. 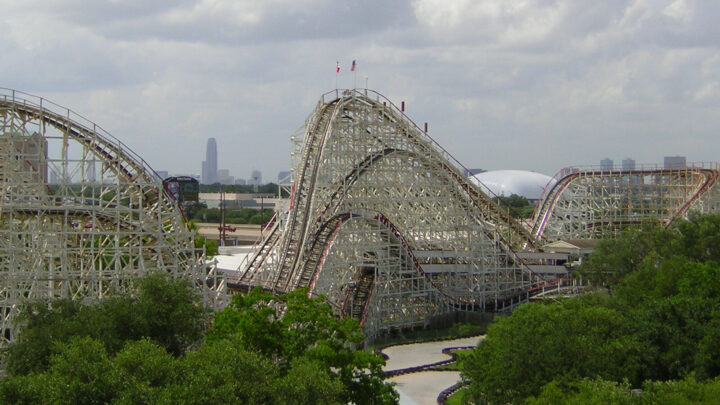 A mirror image of the historic Coney Island Cyclone, Texas Cyclone opened at Six Flags AstroWorld in 1976. The park originally planned to relocate the actual Coney Island Cyclone — then in a state of disrepair — to the Houston, Texas theme park. But when the cost of such a massive undertaking proved to be too high, AstroWorld instead hired legendary roller coaster designer William Cobb to build a mirror replica of the coaster.

Texas Cyclone closed along with the rest of Six Flags AstroWorld in October of 2005. As of this posting, the land the park was built on is still largely vacant. 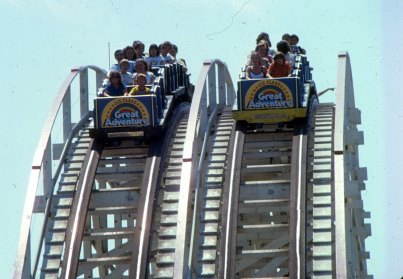 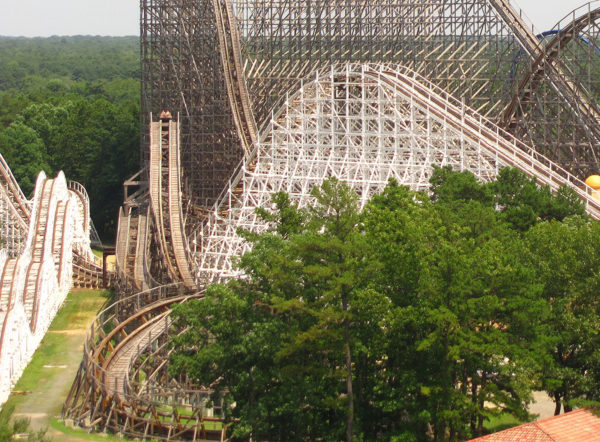 The racing wooden coaster, Rolling Thunder opened as the star attraction at Six Flags Great Adventure in 1979. Though the track lengths of both sides were the same, the height of each track’s hills varied throughout the course, offering guests two slightly different ride experiences. In 2006, the coaster was dwarfed by the towering El Toro wooden coaster yet still remained a popular attraction among guests.

Rolling Thunder closed in September 2013 to make way for construction of Zumanjaro: Drop of Doom, a drop ride built onto the supports of Kingda Ka. Rolling Thunder and Zumanjaro likely could have coexisted, but Rolling Thunder’s age likely played a large role in the decision to close it. 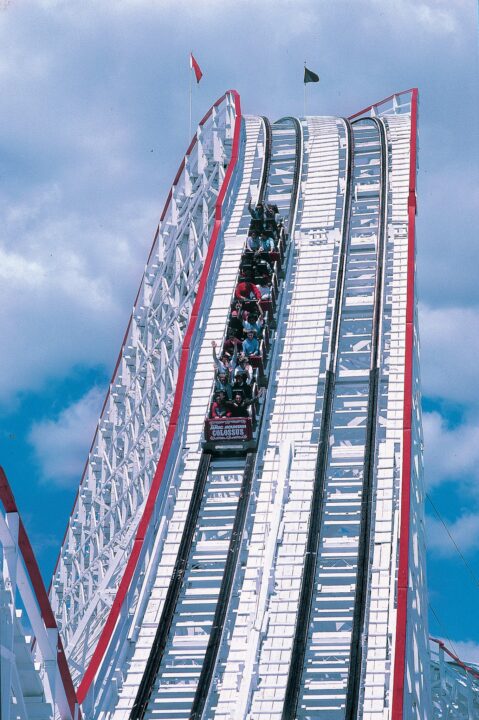 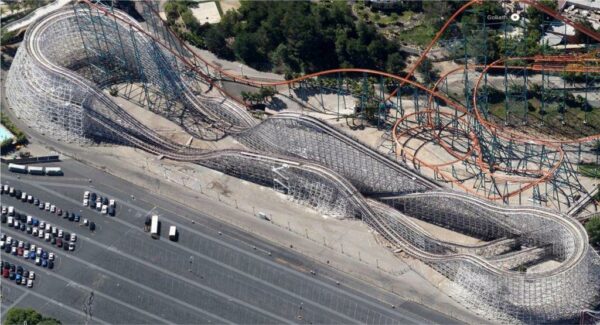 Opened in 1978 as the tallest and fastest roller coaster in the world, Colossus was the first roller coaster to feature two drops over 100 feet in height. The towering white structure intimidated many guests as they entered the Six Flags Magic Mountain parking lot. The coaster was plagued by extensive downtime in its first year and closed in May 1979. In the following months, sections of Colossus’ track were re-profiled, and the coaster received new trains. While the coaster became more reliable after these modifications, it would see more changes over the years.

In August 2014, Six Flags Magic Mountain announced that Colossus would give its last rides on August 16. Later that month, the park unveiled plans for Twisted Colossus, a new steel coaster using a significant portion of the wooden coaster’s support structure. Designed by Rocky Mountain Construction (RMC), the coaster features a single track (one half blue and the other half green) but is designed to be an alternate form of the Möbius loop coaster. This means that each train travels both sides of the track before returning to the same station it departed from. In a perfect scenario, trains are able to race if one train completes the first half of the ride as another train is departing the station. Unfortunately, trains may not sync properly due to trains not departing at the correct intervals. 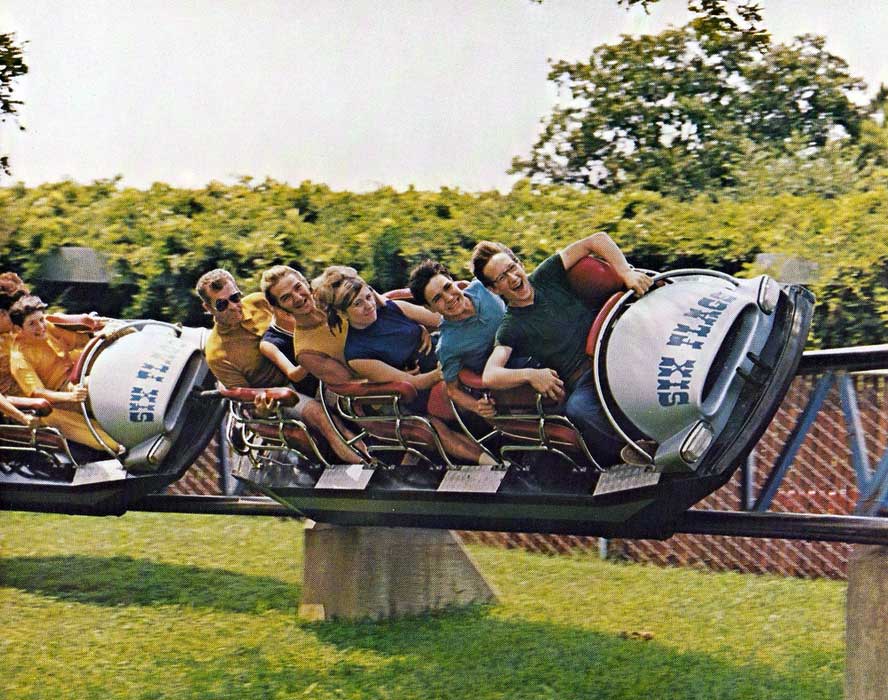 Opened in 1971, Big Bend was the first Schwarzkopf “Speedracer” model, an extended version of the company’s “Jet Star,” which had been in production since the late 1960s. Big Bend featured two electric spiral lift hills and inline seating in toboggan-like trains. The sprawling layout featured banked turns, several of which remained close to the ground.

Due to low capacity and extended downtime, the coaster closed in 1979. Its track and trains were sent to Six Flags St. Louis with plans to rebuild the coaster there. That plan never materialized, and the track and trains sat in storage from 1980 until being scrapped around 1989. 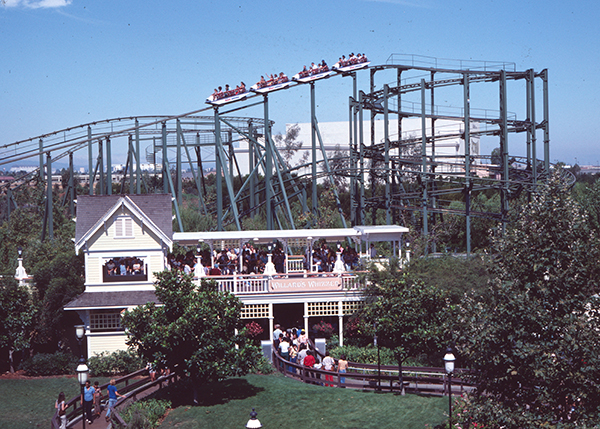 Whizzer was removed from the park in 1988. Today, the Gold Striker wooden coaster occupies much of its former space. Thankfully, Whizzer at Six Flags Great America remains in operation. 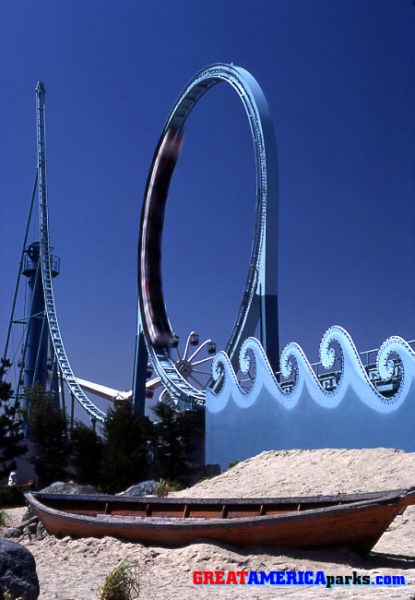 Originally opening as Tidal Wave, the Schwarzkopf shuttle loop coaster was renamed Greased Lightnin’ for the 1999 season. Opening in 1977, it was the first new coaster added to California’s Great America — then known as Marriott’s Great America — following the park’s debut in 1976. Greased Lightnin’ featured an innovative weight-drop system to propel trains toward the single vertical loop and 137-foot-tall spike. The train would then complete the course in reverse. 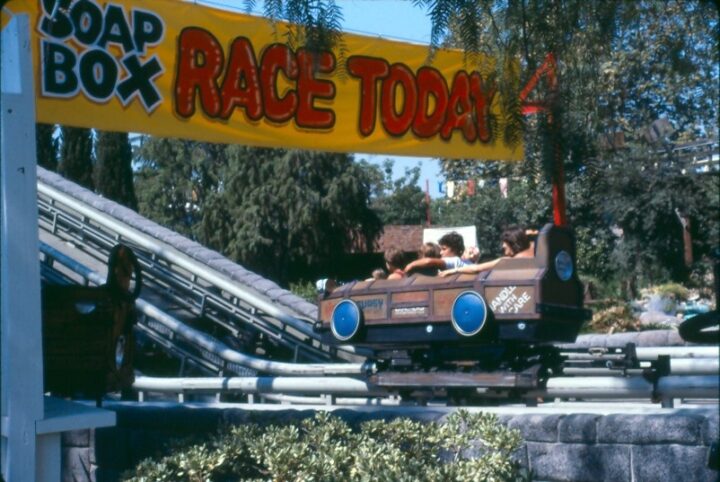 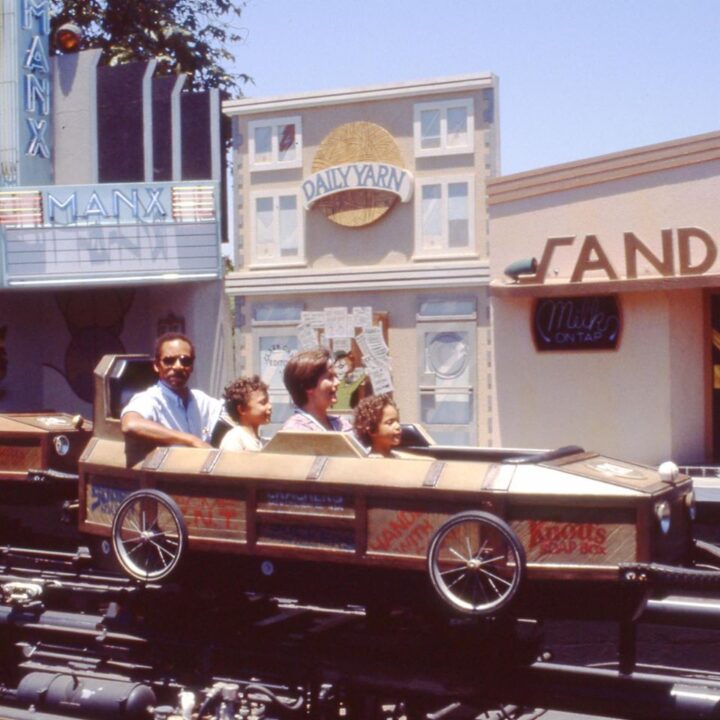 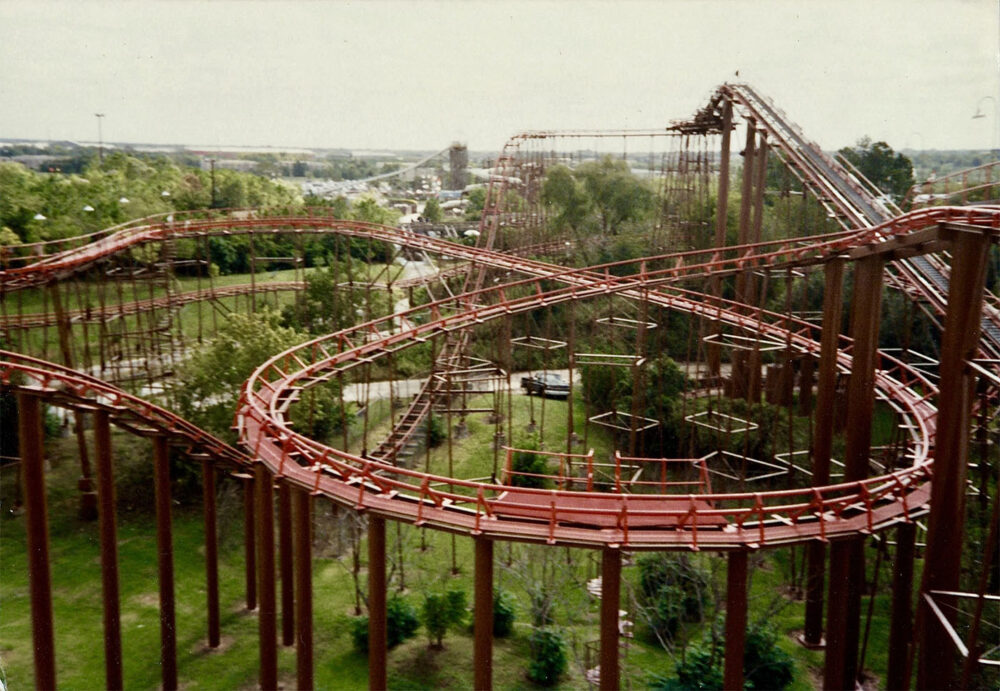 Making its debut in 1972 as Dexter Frebish’s Electric Roller Ride, the later-renamed Excalibur was the second coaster to open at AstroWorld. The Arrow Dynamics mine train stood taller than many other Arrow mine train coasters, which tended to remain relatively close to the ground.

The coaster was disassembled and moved to Frontier City (owned by Six Flags), where it sat from 2000-2005, when its trains were sent to Six Flags Over Texas and the track and structures were scrapped. 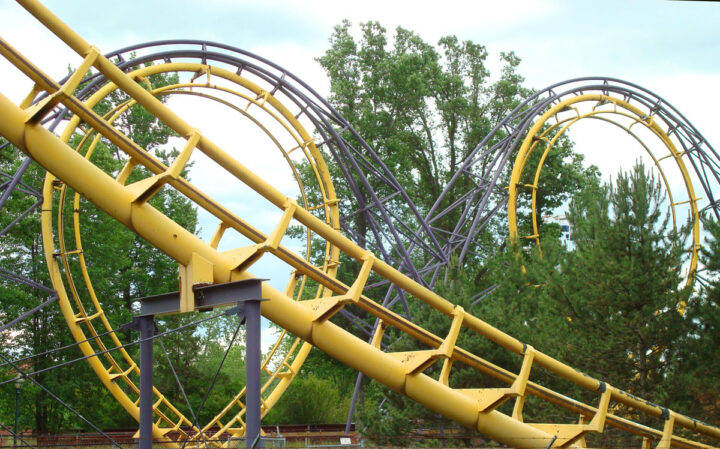 Opened in 1977, Double Loop was the first roller coaster in the world to feature two consecutive vertical loops. The Arrow Dynamics coaster was followed in 1978 by another double-inverting Arrow coaster, Corkscrew.

Double Loop closed in 2007 with the rest of Geauga Lake. The following year, the coaster was sold at an auction to a local scrap company.

What former coaster that opened in the 1970s do you miss the most? Let us know in the comments section below!