We’re really getting into the “swing” of things during theme park announcement season, and it looks like SeaWorld San Antonio is doing the same. Today the park announced the addition of Tidal Surge, the World’s Tallest and Fastest “Screamin’ Swing” from S&S-Sansei.

Tidal Surge is not your average backyard swing! According to the park, this breathtaking attraction will feature two pendulum-like arms, seating a total of 40 riders, that will soar progressively higher and higher with each swing. Starting slowly and progressively flying faster and higher, the ride will reach a staggering height of 135 feet at its peak!

Twin dueling arms will alternate sides and sway back-and-forth at 68 mph, creating multiple airtime moments that levitate guests out of their seats with each pulse-pounding swing. Riders’ legs will dangle and hang as they soar over the waterski lake and take in the beautiful views of the park, all while reaching multiple negative G moments before plunging back towards the earth. 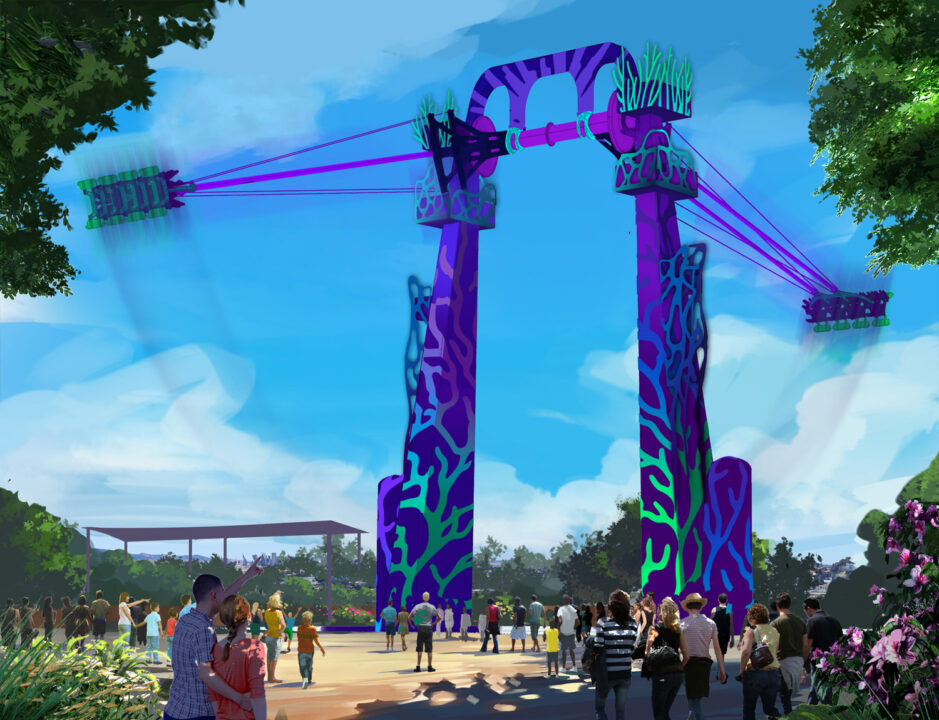 Each arm features 230-degrees of rotation, meaning riders will be beyond vertical when the arms are at their full extension. Better yet, the height requirement for this attraction is just 48″, meaning that younger thrill seekers will be able to experience the attraction!

While the tallest and fastest Screamin’ Swing isn’t officially recognized, Tidal Surge is taller than Skyhawk at Cedar Point by two feet on the static structure (105′ to 103′), faster by three miles per hour (68mph to 65mph), and its arms extend 10 feet further above the ground. (135′ to 125′.)

SeaWorld San Antonio’s parent company, SeaWorld Parks & Entertainment, recently installed a Screamin’ Swing at Busch Gardens Williamsburg, named Finnegan’s Flyer in 2019. Be sure to check out the videos above and below to go for a ride from the side and a footcam reverse POV!

For more information, be sure to visit the SeaWorld San Antonio website.

Are you ready to swing on Tidal Surge? Let us know in the comments below!