Orion Behind the Scenes at Kings Island Coasterstock 2021

In the picture below, see the access road in the background, underneath Orion’s speed hill? That’s where we got to walk! 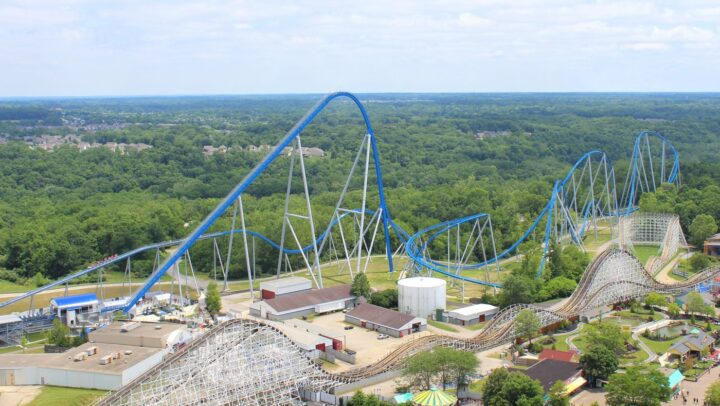 Orion is the largest investment in Kings Island history, coming in at $31 million. 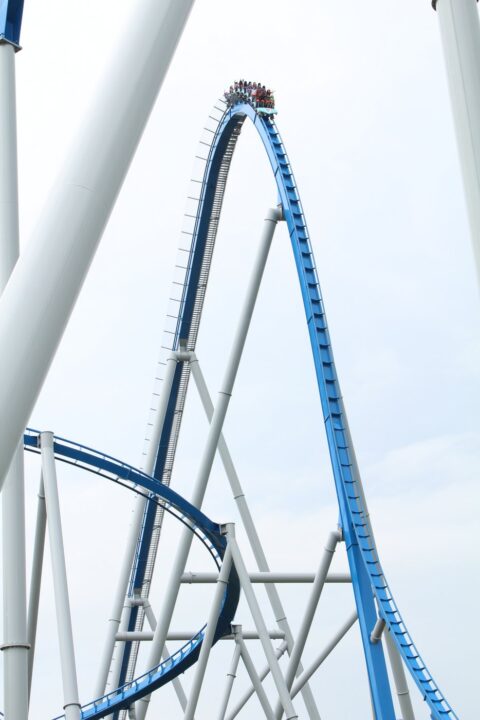 Much of Orion’s layout is positioned away from the park’s midway, so this tour was a rare opportunity to view the coaster from a different angle.

Our tour began just as a rain shower moved in, but that didn’t dampen the views. 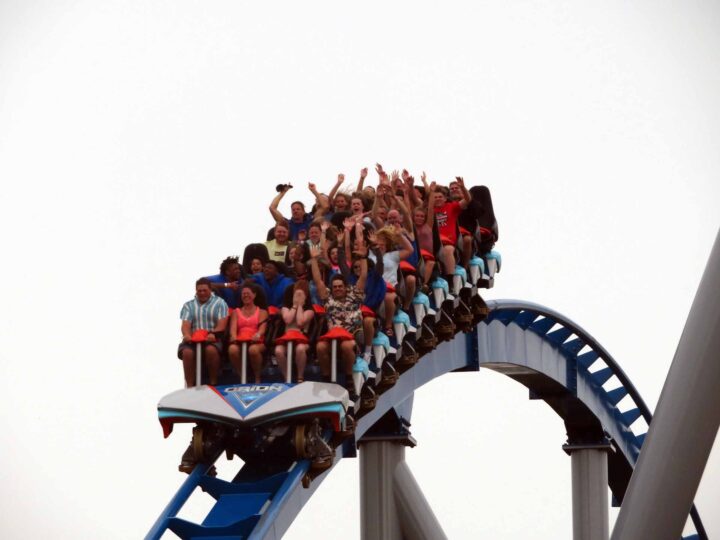 Okay, well maybe it dampened some views. If you’ve ever ridden a coaster in the rain — even light rain — you know it can sting just a little… 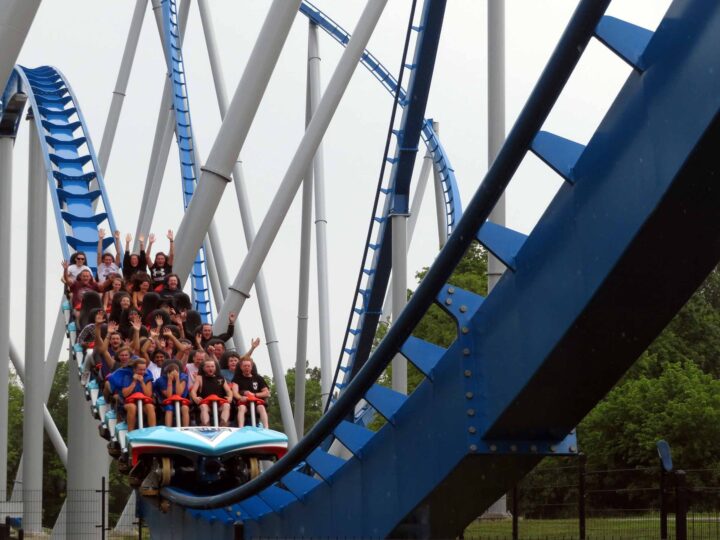 …especially at the coaster’s top speed of 90 mph. 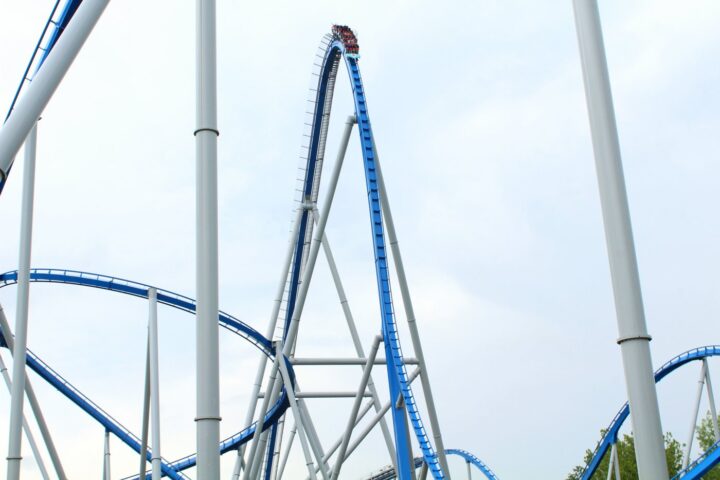 Orion “only” stands 287 feet tall but takes advantage of the park’s terrain to drop riders 300 feet, which classifies it as a giga coaster. 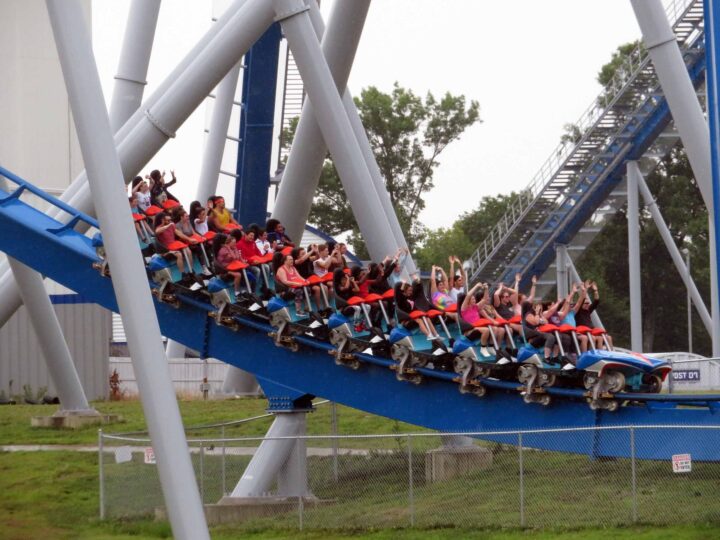 The coaster’s electric blue track “touches down” multiple times throughout the 5,321-foot-long layout. 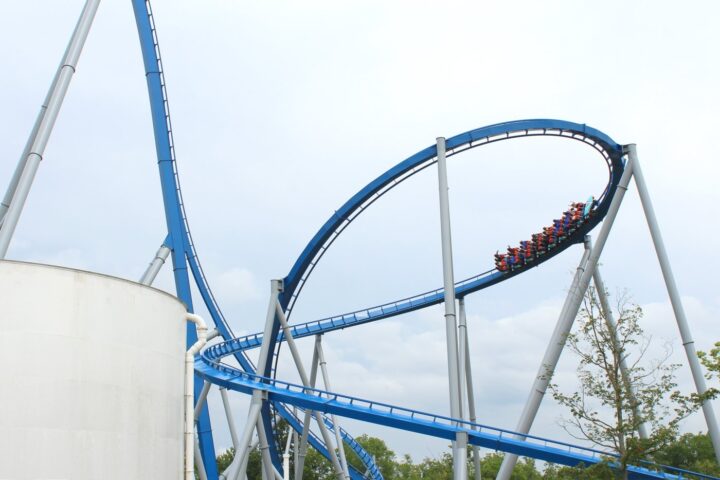 Seeing the dizzying “Orion’s Belt” element from a different angle was a highlight for me. 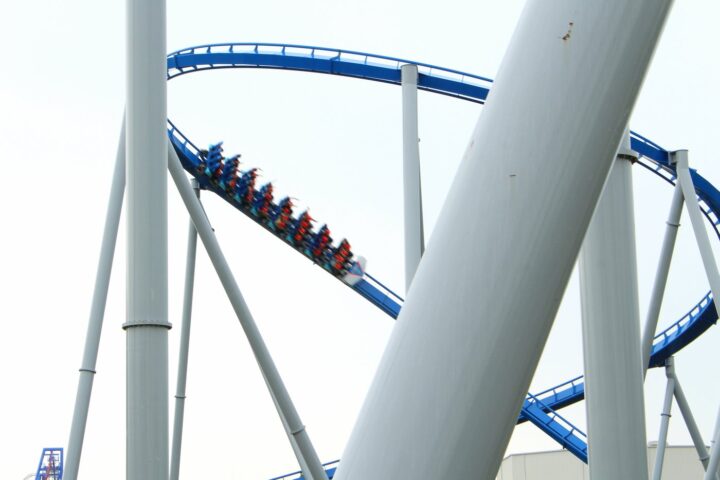 The speed that trains take as they maneuver through the “Belt” is blistering. In fact, my vision typically “grays out” due to the intensity of the element. 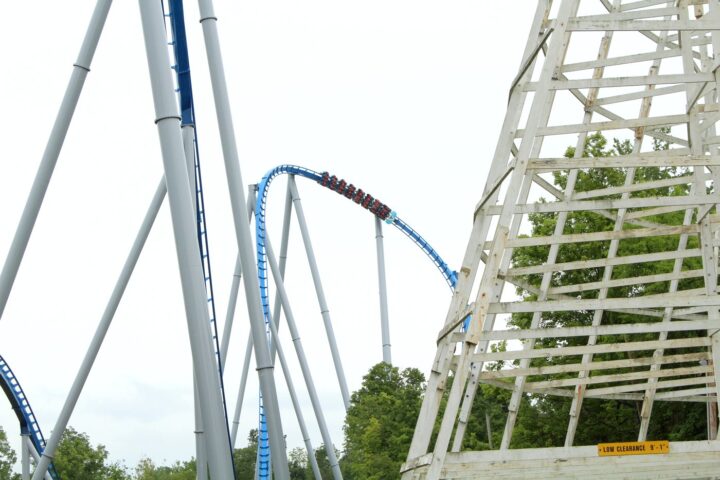 Another highlight of Coasterstock 2021 was meeting Evan Ponstingle in person. His book, Kings Island: A Ride Through Time, details the history of Orion. 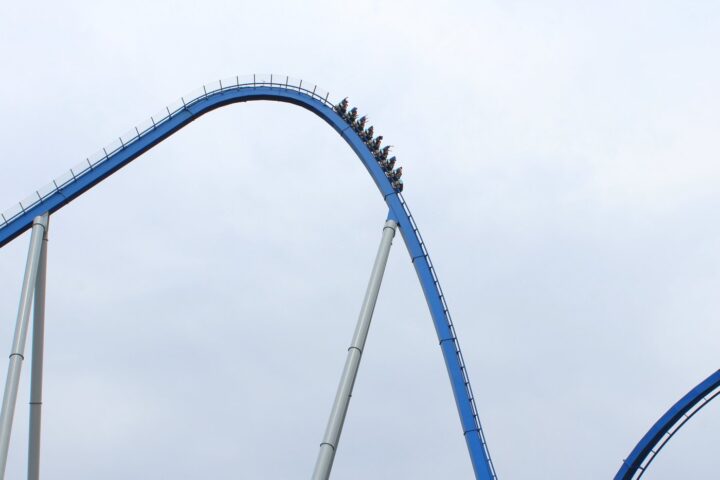 Originally, Cedar Fair had a contract with B&M to build a hyper-coaster, dubbed “Megabite”, for sister park California’s Great America.

When the construction costs for that ride went up Cedar Fair decided in June of 2018 to move the ride to Kings Island and redesign it specifically for their park. 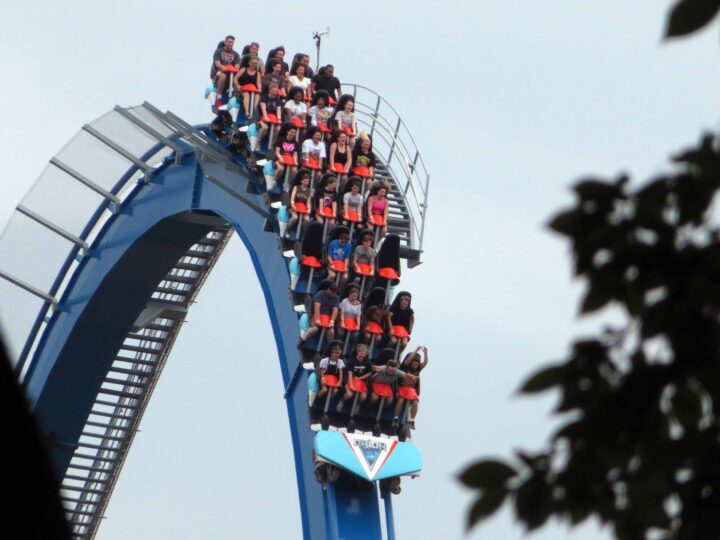 Orion was originally intended to have the staggered seating arrangement as seen on Diamondback, a holdover from the design for California Great America’s hyper-coaster. 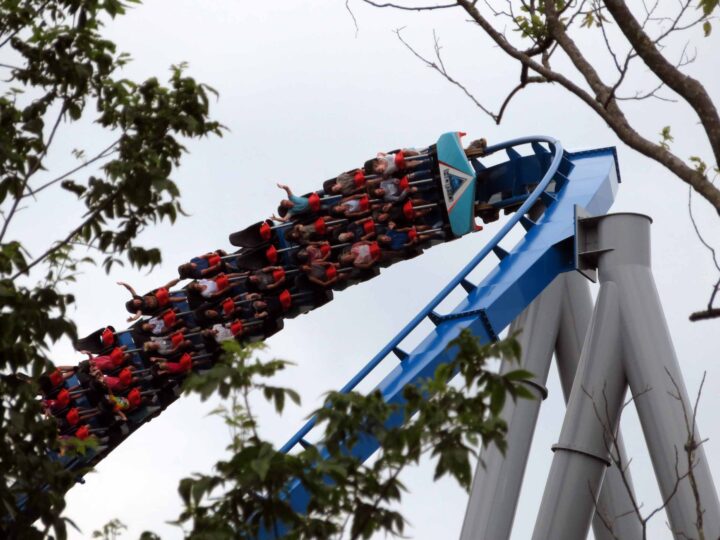 Though some of the management lobbied for floorless trains, the current four-across seating was selected for capacity and to differentiate it from Diamondback. 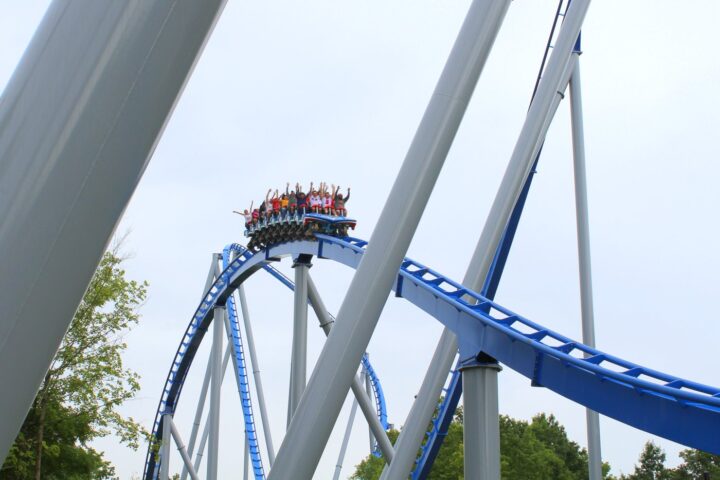 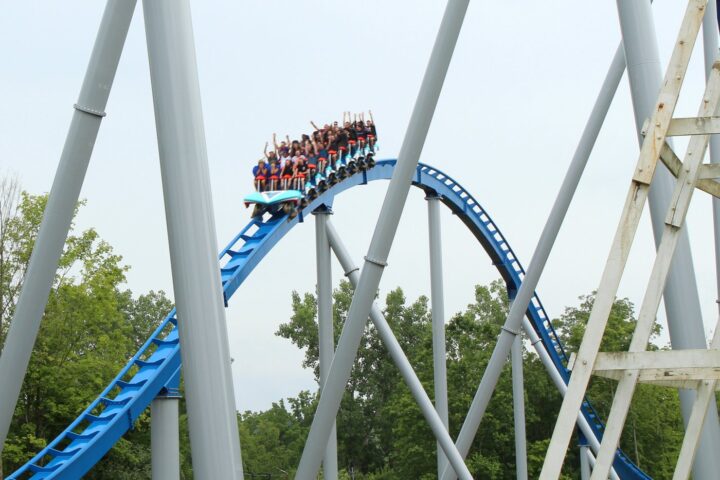 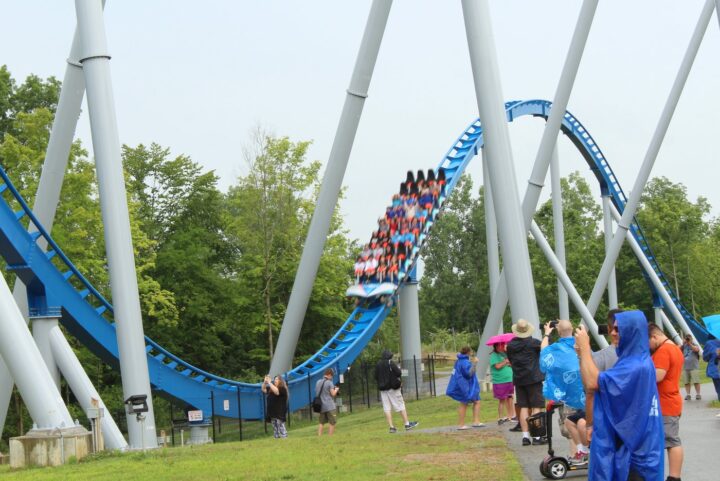 I was surprised by how close we were able to get to the coaster, although the Kings Island team was very diligent in making sure we didn’t get too close. 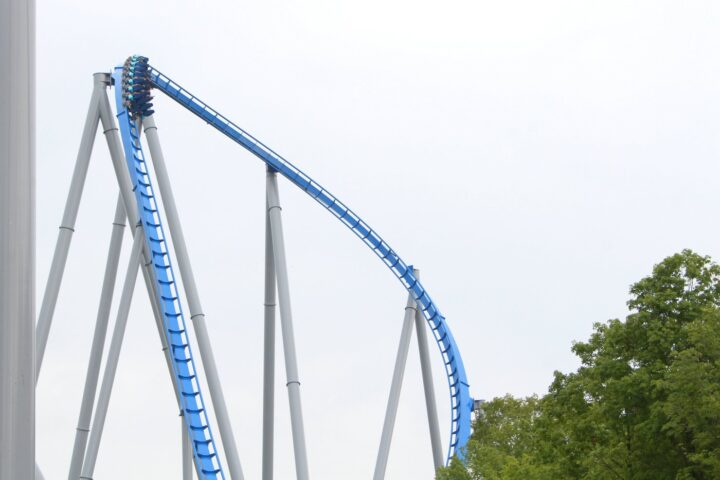 Orion’s horseshoe element stands just over 200 feet tall. Unfortunately, we weren’t able to get very close to it. That would’ve been quite a hike. 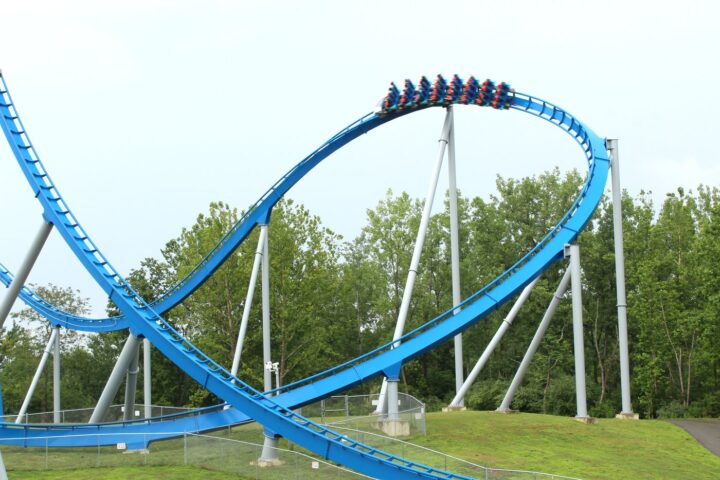 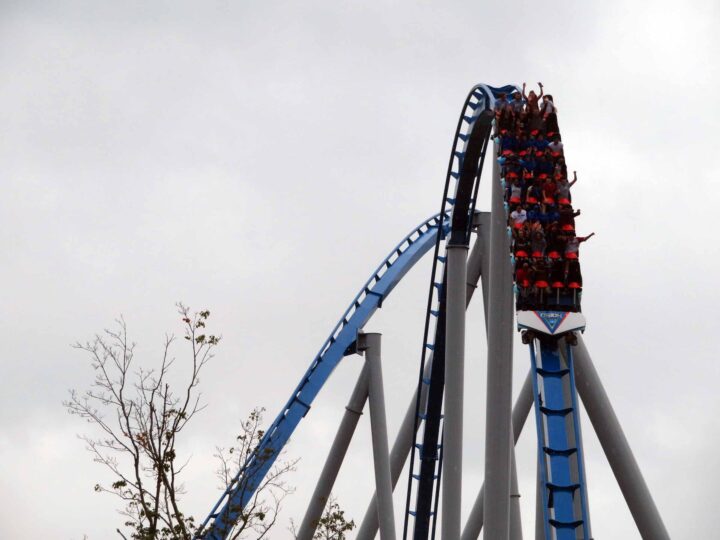 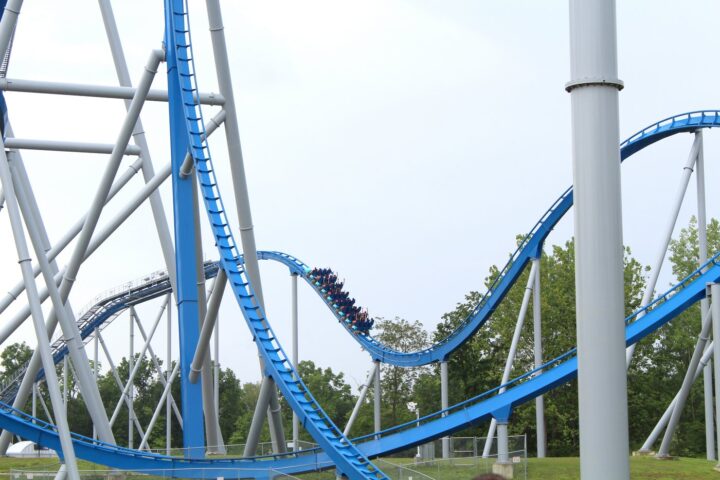 I very easily could have spent an entire day meandering up and down the service road, watching in awe as Orion’s trains sped through the course. 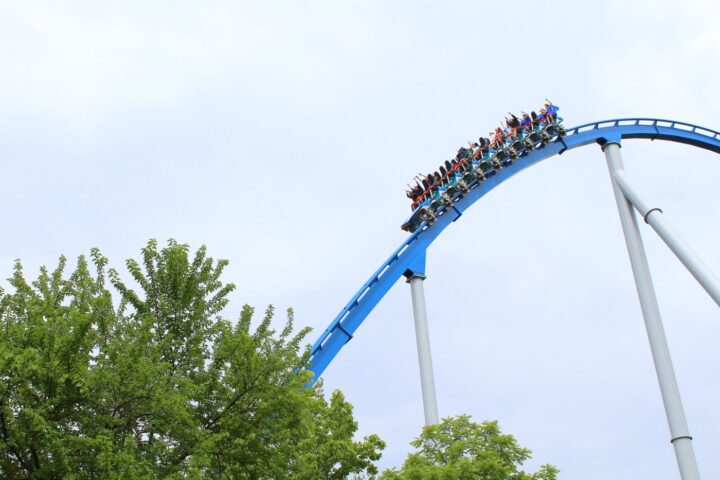 But alas, the Coasterstock itinerary was packed, so we had to move on to our next activity. 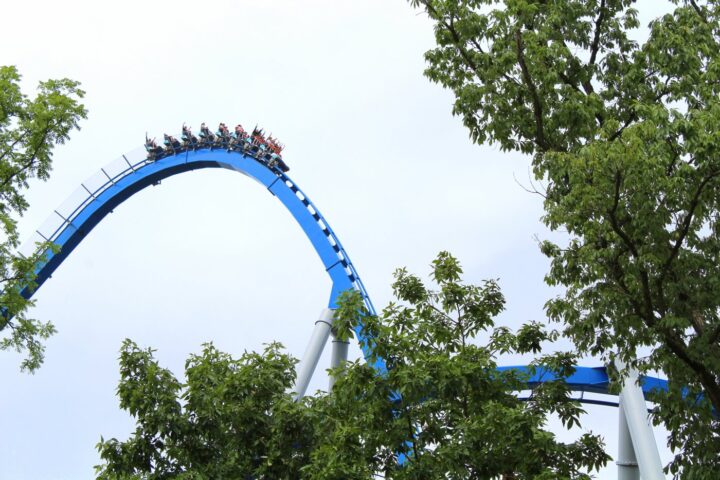 I hope I’m able to walk this path again someday.

Orion Behind the Scenes Video

Check out our Orion Behind the Scenes video to see the ride in action from every angle and listen to that B&M roar!

Thanks to Don Helbig and the Kings Island team for organizing this exciting tour!