When I was growing up, I had a different career aspiration than a lot of my peers. I didn’t want to be a professional athlete or doctor or lawyer — I wanted to design roller coasters. I was constantly playing around in Roller Coaster Tycoon, and remember researching all of the United States-based roller coaster design companies when I was in middle school. It was what I was going to do. Spoiler alert: I’m not that good at math and science, and my roller coaster design dreams ended pretty quickly in high school. But I wonder from time to time if I had some actual instruction in the area, if my career path would have changed. 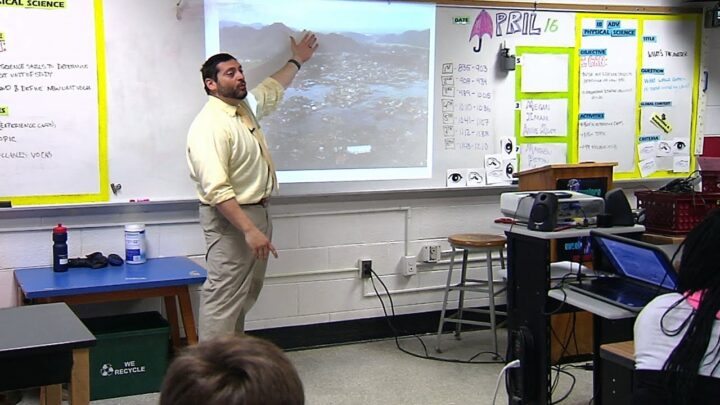 Brice Fritts Teaches a Class in 2018.

At Tuckahoe Middle School in Henrico, Va., 7th grade teacher Brice Fritts is educating the next generation of roller coaster designers in his IB Design Class. What started as a traditional “science” class with “experiments ending in a 10-page paper” was changed when the International Baccalaureate cirriculum was changed to include 50-hours of actual design in the class.

“We had to create a new class at that point, because 50 hours was a lot of design time,” Fritts said. “The school asked me what I wanted to design, and I told them, ‘Why not roller coasters?’ because that was something I enjoyed.”

Fritts, who holds a Master’s Degree in Engineering, caught the roller coaster bug during a high school trip, after previously being too afraid to ride them when he was younger.

“I was just scared to death of them when I was younger,” he said. “I went on a school trip in ninth grade, and in order to not be that kid, I told myself, ‘Well, I guess I’m going to have to get over my fear of roller coasters and ride them.’ And I ‘ve been hooked ever since then.”

Fritts worked at Kings Dominion during his sophomore year of college, and worked his way up through the ranks of collecting backpacks at Volcano to actually operating the departed “Blast” Coaster, and being cross-trained to operate Anaconda and Avalanche as well.

1st day of #IB #RollerCoaster Design. Students had to build a track that had a loop, curve, and jump. Car needed to complete 3 successive successful runs. #Compete @TMSPatriots pic.twitter.com/TDUvGNQupG

When the opportunity came to create his idea for the design class, Fritts took inspiration from a course at Carnegie-Mellon University that was taught by Jordan Zink.

“I knew when I decided to do roller coasters and design that I wanted to teach it the right way. I started looking for other similar courses. [Zink] had done a lot of things with a roller coaster design course, and is whole class of pretty much posted online,” Fritts said. “I started looking at all his stuff and thought ‘I like this, let me see if I can pull from here.’ The kind of the flow of the class that we use is very similar to how he taught and approached. We learn about the history of roller coasters. We do a video watching assessment where we have to watch all these different POVs of the roller coasters to kind of learn about them and then notice the different manufacturers and intricacies and we start to combine everything into the design element.” 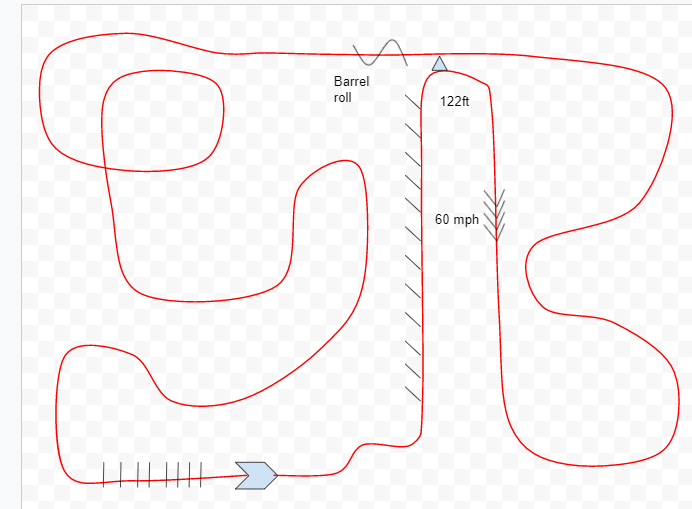 In the second half of the year, the students focus more on physics and design, with a google document calculator that Fritts designed. Each coaster starts with a simple drawing, and there are conversations about forces and banking, before the class gets into desiging with NoLimits.

The class was designed around the IB design cycle, which is similar to the engineering design cycle. Fritts had to adapt everything to fit that cycle.

The course then discusses location, theming, and roller coaster “failures,” including the infamous Drachen Fire at Busch Gardens Williamsburg, which is the source for the final project of the class – designing a roller coaster to occupy the space formerly occupied by Drachen Fire.

Special thanks to @BuschGardensVA engineers for speaking with students about coaster design, reviewing student roller coasters designed on @nolimitscoaster & choosing which would be best to replace Drachenfire. @TMSPatriots #HLP pic.twitter.com/H8RQVQv6iO

To conclude the class, Fritts typically gets Busch Gardens Williamsburg involved to “judge” the best of the best student creations, which are also “pitched” to the park via a website and statistics. When Busch Gardens Williamsburg couldn’t participate this year, Fritts enlisted the help of Coaster101, who came prepared with backup of actual designers and sales people of roller coasters to help judge — Evan Souliere and Tyler Mullins from Skyline Attractions and Adam Sandy from Zamperla’s Roller Coaster division.

Thanks @fritts57 for having us judge your 7th Grade IB Design Class' roller coaster competition. (And thanks to @Adam_F_Sandy @zamperlarides & Evan and Tyler from @SkylineAttrax for answering the call when we were looking to add actual industry credibility!) pic.twitter.com/TUFOYwT5dm

Werewolf of Morbach, The Winning Design 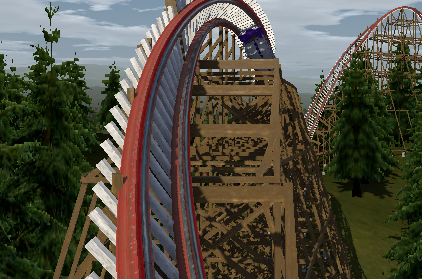 Yes, this roller coaster was designed by a SEVENTH GRADER!

Jackson developed his love for roller coasters after riding California Screamin’ at Disneyland, but almost didn’t take the Roller Coaster Design class, realizing it didn’t exist until the “the last minute.”

“I didn’t know they had a roller coaster design class until last minute when I was picking classes. And I saw the class and thought ‘Oh, that sounds pretty cool!”

While many of Jackson’s classmates focused on Busch Gardens Williamsburg’s relationships with Intamin and B&M as ideal coasters to occupy the former Drachen Fire location, Jackson had a different idea — a ground-up design from Rocky Mountain Construction.

Special thanks for Engineers from @BuschGardensVA skyping in to our #IB Roller Coaster Design class to view our coaster designs and choose the best one to enter the park! Congrats to Gnome Heist for the win! #LifeReady @TMSPatriots @HCPSScience #tlap pic.twitter.com/MJmLzDHAxV

“Busch Gardens doesn’t currently have an RMC, and I think every park needs an RMC, so that’s why I decided to go with it. I had to decide if it was going to be a smaller RMC or larger RMC, but ended up being a larger RMC.”

Jackson, who notes Kings Dominion’s Intimidator 305 as his favorite roller coaster, took a little inspiration from I305’s RMC neighbor, Twisted Timbers, as inspiration for Werewolf of Morbach, and also noted that it could be a “follow-up” to Big Bad Wolf. But it wasn’t just coaster design that he learned in the class.

“I didn’t know all of the safety features that roller coasters had before this class,” Jackson said. “We also learned a lot about coaster wheels and how they’re on the inside and outside of the track.”

The rising eighth-grader notes that he might have a future in roller coaster design, and has Mr. Fritts class to thank for it.

“I think it’s fun,” Jackson said. “I’ve been thinking about it a bit and it’s definitely a career option I’m going to look into. With the roller coaster design class, you can be creative and create whatever you want. There’s not really a limitation. It’s great.”

Fritts notes that the design class has been perfect for some of his students, Jackson included.

This is the winner of our Design @ibmyp Wooden Coaster Challenge for this year. Next step is designing and creating a new coaster for either one of our home parks @BuschGardensVA or @KingsDominionVA. Looking forward to what students will come up with. @Coaster101 @HenricoScience pic.twitter.com/d74THyK5CG

“I got an email from Jackson’s mom, saying, ‘Hey, whatever is going on, he is just loving this class and doing this. He wants to design things,” Fritts said. “That was a good feeling. I have a lot of kids that don’t even like roller coasters that much but, enjoy that we teach design with roller coasters. Some of those kids have actually done really well.”

“Just seeing them blossom like that and how they will grow like Jackson,” he continued. “He was very quiet, and it’s been really cool seeing students like really enjoying this kind of stuff and having them talk with and interact with professionals, they’re saying, ‘Wow,’ because they kind of know what’s going on. I think that the kids are buying into it and it’s great to see. I really enjoy creating memories like ‘I remember talking to a professional about a roller coaster design.’ To a seventh grader, that’s kind of something that you’ll always remember.”

Tuckahoe Middle School is going full IB next school year, and that has allowed Fritts to put the class out there for anyone who wants to take the class.

“I’ve actually got about 23 or 24 people that actually want to do roller coasters next years,” he said. “It’s going to be a lot better of a mix. I won’t have the few students that are just like, ‘I don’t know what I’m doing. I don’t want to do this.’ I’m going to have 23 or 24 ‘roller coaster’ folks in here next year, which is going to be great.”

For Fritts, who is also a football coach, he feels he has found a great location and is passionate about the course he teaches.

The Drachen, Another Roller Coaster Finalist.

Selfishly, I wish something like this existed when I was in middle school. Maybe I’d be designing them instead of writing about them! Keep up the great work, Mr. Fritts!