Little did I know that my last visit to Six Flags Great America (August of 2019) would be my last for nearly two years. I’ve spent more time at this park than any other — I struggle going a few months without visiting. Needless to say, 685 days without a trip to the park was tough.

Like many other parks across the country, Six Flags Great America stood dormant for the entirety of the 2020 season (not including Hurricane Harbor, which was allowed to open), aside from a Holiday in the Park drive-through event in the latter part of the year. 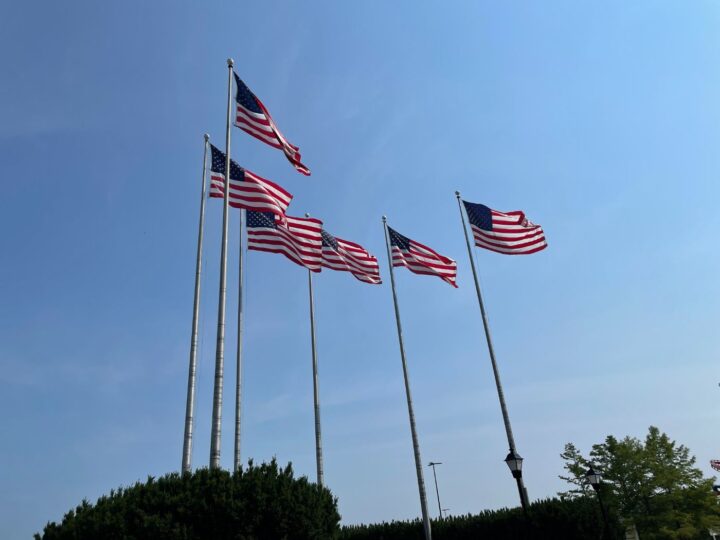 The timing of my trip aligned with the Fourth of July holiday weekend. While not the best time to go, I knew that I would be able to ride a lot early in the day before crowds arrived later in the day for the fireworks.

Note: I’m not a water park fan, so I can’t comment on the Hurricane Harbor side of the park. But the new water coaster is an imposing presence. Get to Hurricane Harbor early as it supposedly reached capacity at some point during the day. 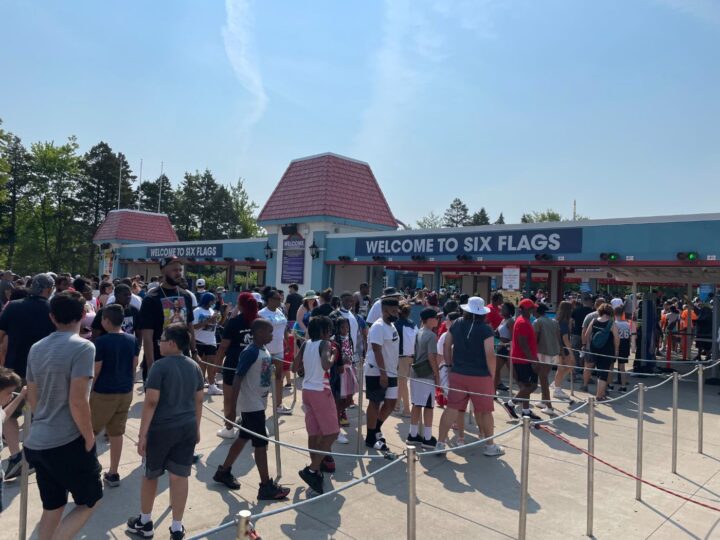 The park opened at 10:30, and I arrived at a quickly filling parking lot at 9:45. Thankfully, I found the members-exclusive line which got me into the park within minutes. It appeared that security was only doing random bag checks (which I found very surprising), so I was in the park before 10. 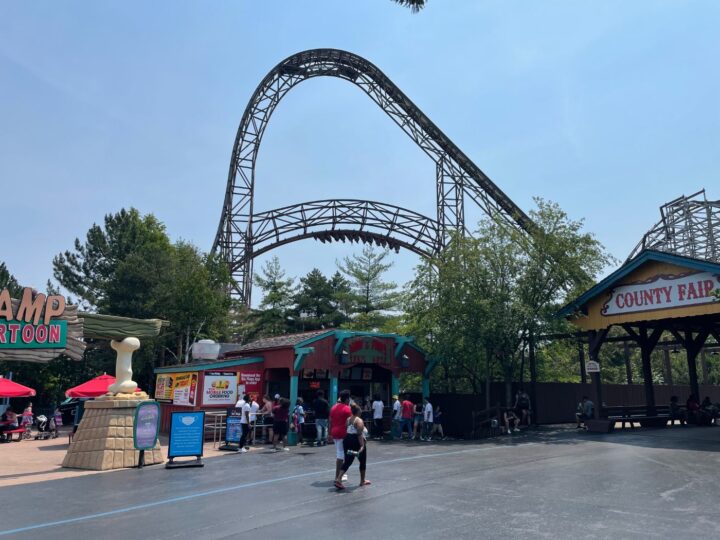 Staffing continues to be an issue not only in the amusement industry but many others as well. So from my visits to other parks this year, I knew that would likely be an issue. 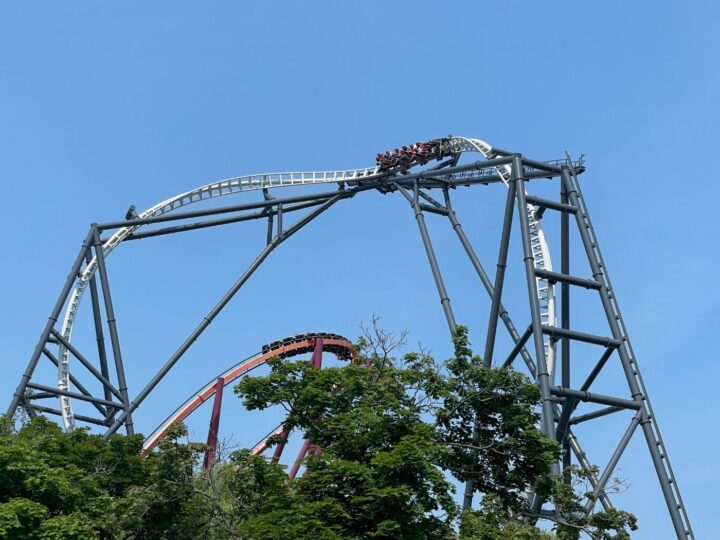 Of course, I knew I was going to start my day with a ride on Maxx Force. If you read my review from 2019, you know I’m a huge fan of this coaster.

But the journey there was not easy. 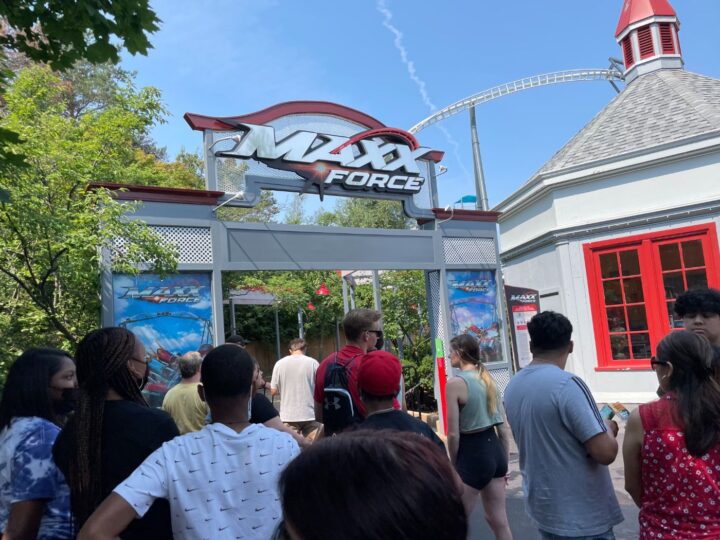 The coaster’s entrance is adjacent to guests congregate to wait for the “rope drop” when the park officially opens. Up to that point, only the Carousel Plaza area is accessible. Until 2019, all of the park’s major coasters were well past this “starting line” of sorts. But with Maxx Force, you now have a line of people waiting to ride Maxx Force, and a mass of people waiting to get into the park.

So what began as a semi-orderly line to the not-yet-open Maxx Force queue soon disintegrated into a giant blob of people hovering around the entrance. Thankfully, the queue opened a few minutes before 10:30 which helped, but the park really needs to have some crowd control here. But understandably, that’s hard to do when the staff is stretched so thin.

But it was worth the headache. The coaster was just as good as I remember.

Waiting for that 0-78 mph launch (in 2 seconds!) gives me anxiety that I haven’t experienced on a coaster since I was a child riding the “big kid” coasters for the first time. 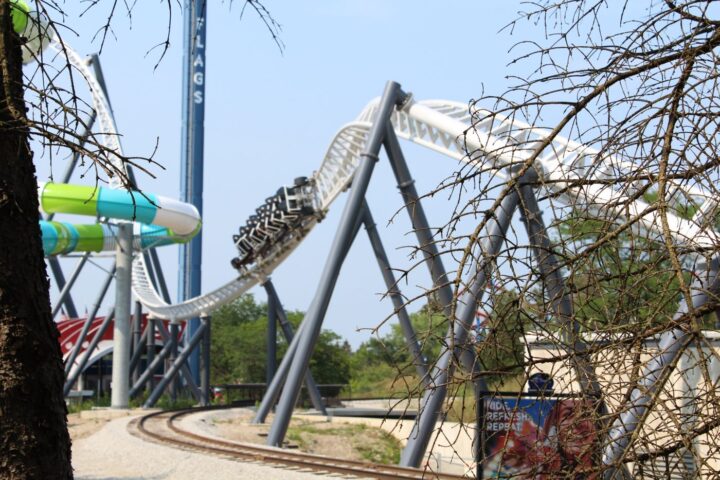 It’s a spectacular coaster — too short but very sweet. 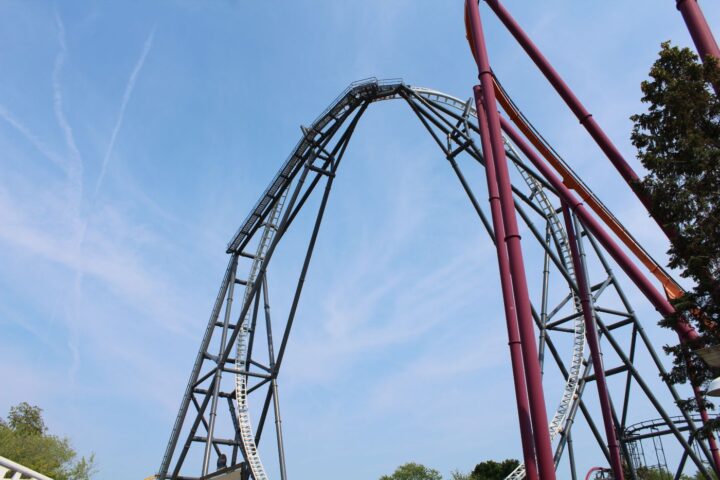 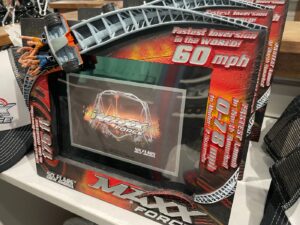 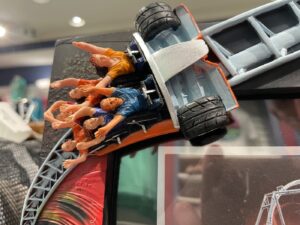 Side note: can we appreciate this detailed Maxx Force souvenir photo frame? Just think if a fraction of this detail had been put into theming the actual coaster!

Due to either staffing-, COVID- or maintenance-related reasons, several of the park’s rides were closed. Demon, Roaring Rapids, Sky Trek Tower, Buccaneer Battle, Yankee Clipper and others were all down for the count. I was especially bummed to see Demon closed, as I never know how much life the aging Arrow looper has left in it.

This is the Logger’s Run log flume line when all of the park’s other water rides are closed.

But what was even more apparent was the number of closed restaurants, food stands and shops.

The train is back! 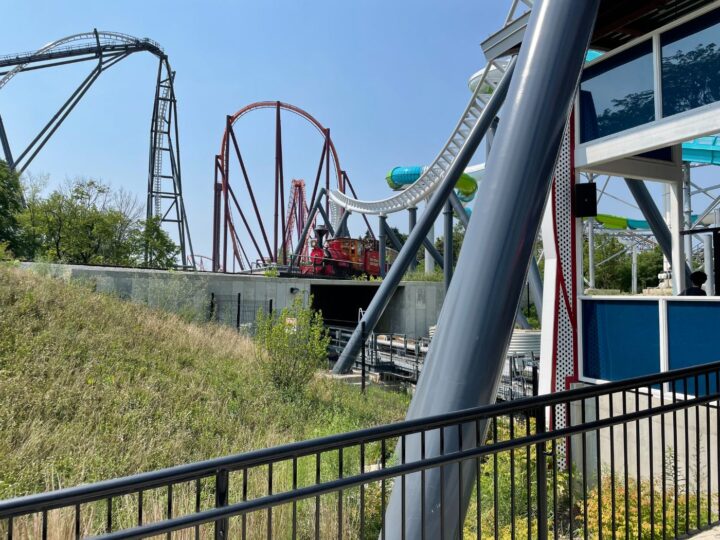 After closing for Maxx Force construction, the Great America Scenic Railway has reopened with fresh paint and a slightly modified course that passes over Maxx Force’s launch. 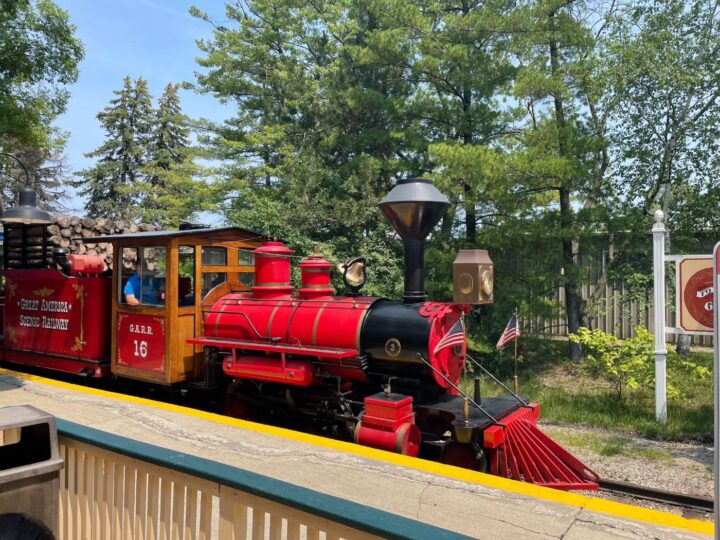 Currently, the train is only operating one-way trips (so you have to exit at each station), but I had no issues reentering the station and getting back on the train.

Food and Beverage and Mobile Ordering

I was very worried about my first Six Flags mobile ordering experience, but I was pleasantly surprised by how easy and painless it was. 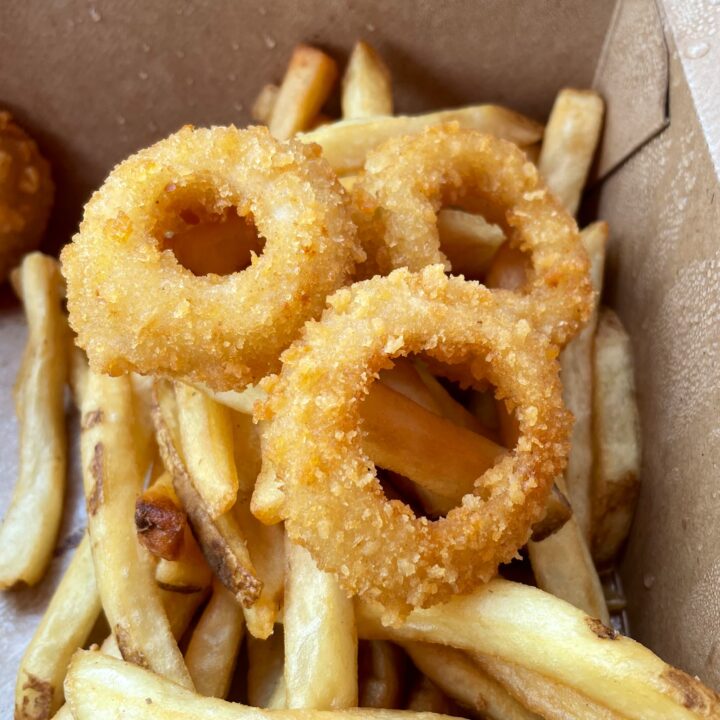 I ordered from Johnny Rocket’s and had no issues picking a pickup time (a 15-minute window). I marked on the app that I was ready for the order to be prepared as I was walking up to the restaurant, and it was waiting for me upon my arrival.

Considering how long the food lines became later in the day, I hope it remained as efficient. It’s a wonderful timesaver. 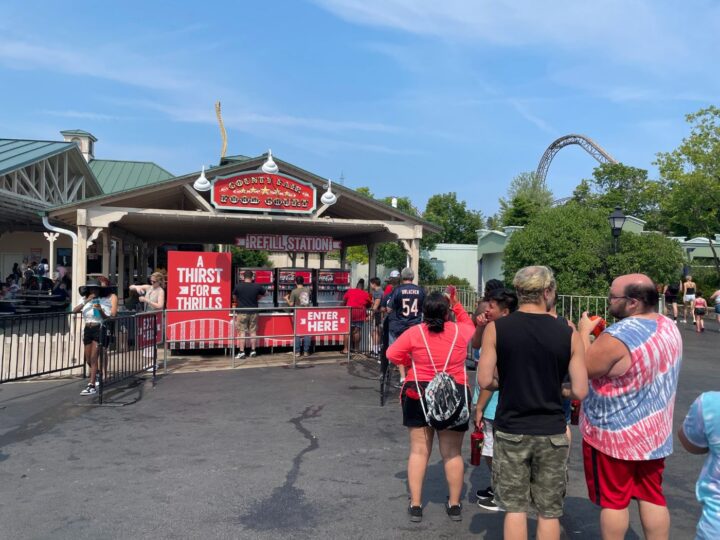 Speaking of saving time, even the lines for the refill stations became long. 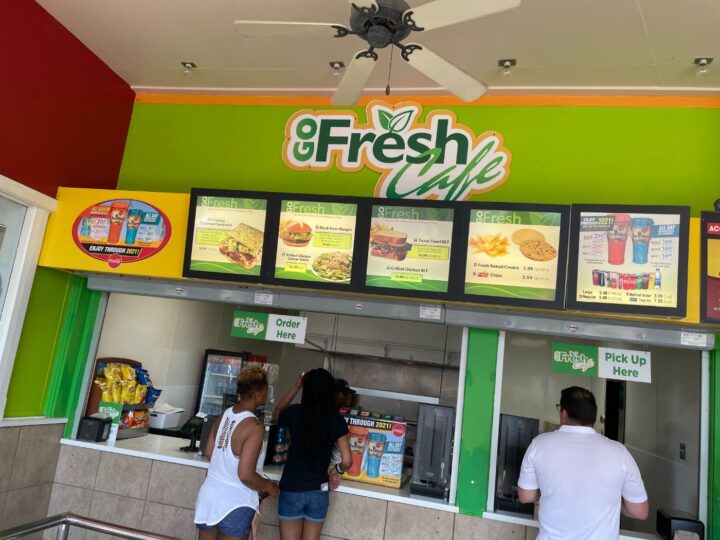 My tip: head to the Go Fresh Cafe location in the County Fair food court. No line, no wait. I guess people aren’t lining up for salads and healthy(-ish) fare at Six Flags. I’m obviously not! 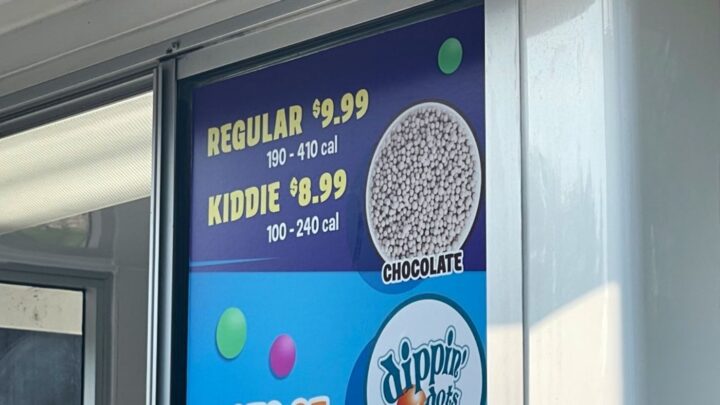 Quick rant — I know theme park food prices are generally high. But $1o for a cup of Dippin’ Dots? C’mon.

Overall, ride operations were great — ride operators were hustling and encouraging guests to do the same and board quickly to get trains out of the station in 30 seconds or less. 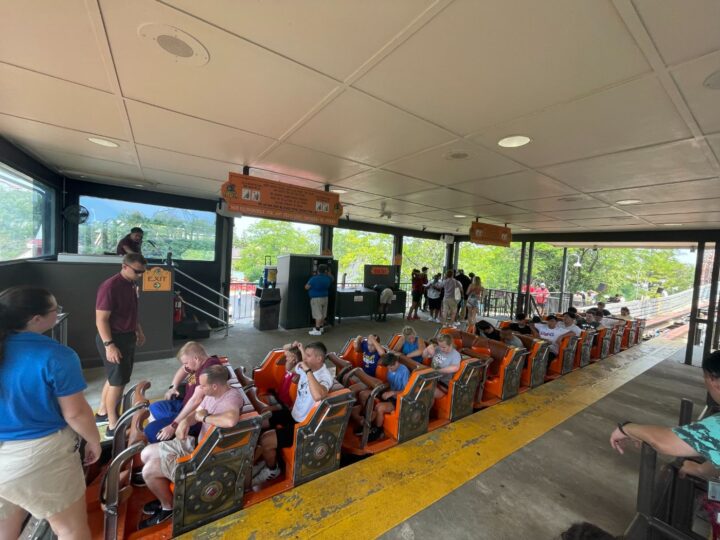 Half a minute is a lofty goal, but that energy kept people moving, especially on a coaster like Goliath which typically has slow load times, due in part to the restraint system. 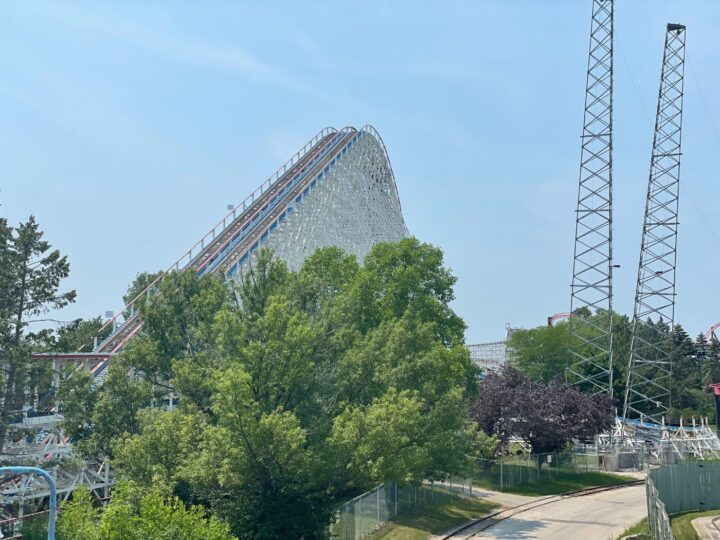 American Eagle is celebrating its 40th birthday this year. Unfortunately, only the red side was operating during my visit. That’s unfortunate, as racing is part of what makes this coaster so special. Hopefully, they’ll race again soon.

While Six Flags Great America is more or less landlocked, there are plenty of spots and areas throughout the park that are primed for redevelopment and new attractions. 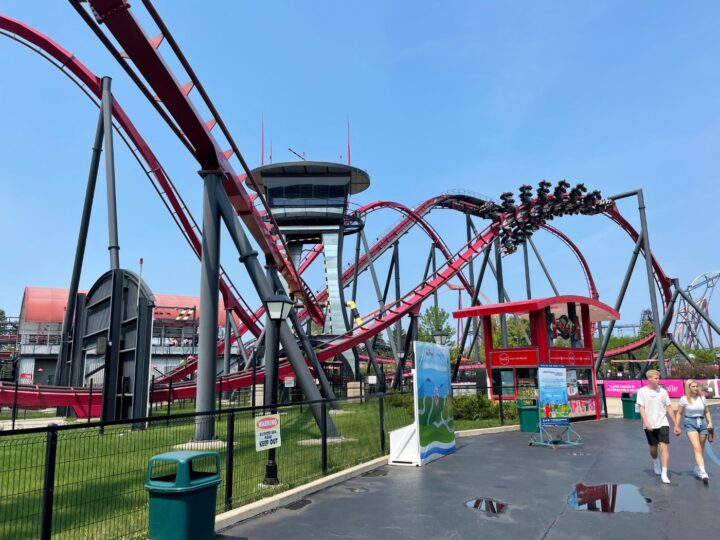 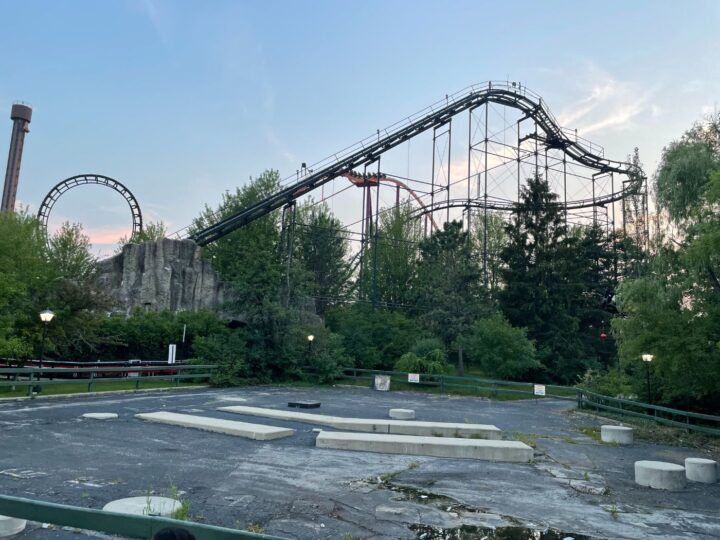 For instance, the site of the former ropes course (and before that, rock-climbing wall) could fit a sizable flat ride. 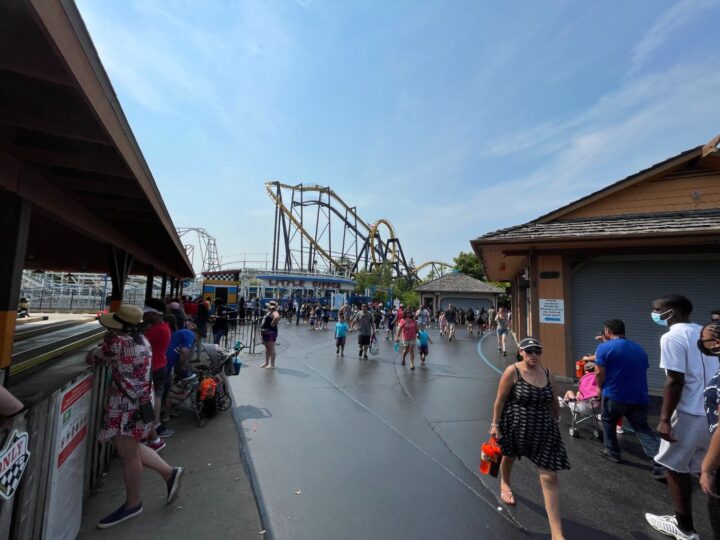 Aside from the view of Batman’s first drop and loop, this is my least favorite area of the park — the swath of asphalt is hot, and the air reeks of gasoline from the adjacent go-kart track. Removing it would free up a considerable amount of space for a compact coaster, especially if they combined it with the space currently occupied by Buccaneer Battle (see my crude proposal below).

Ha I was taking the same screenshot. The go karts definitely need to go. pic.twitter.com/blyrhciJk0

Removing Buccaneer Battle and the go-karts would free up a lot of space in the middle of the park. 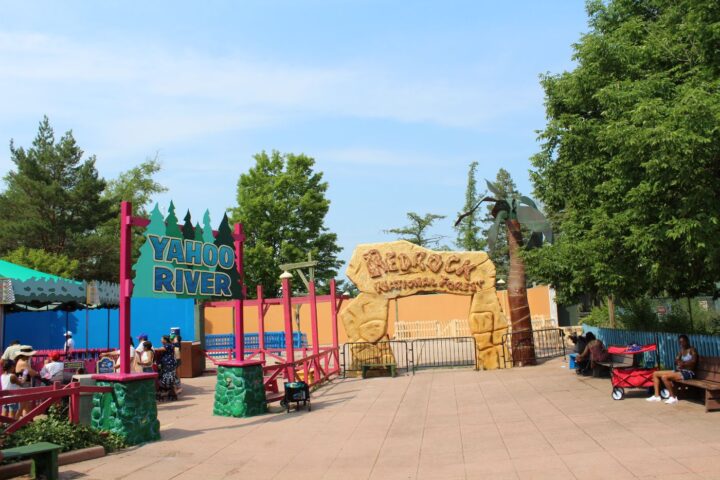 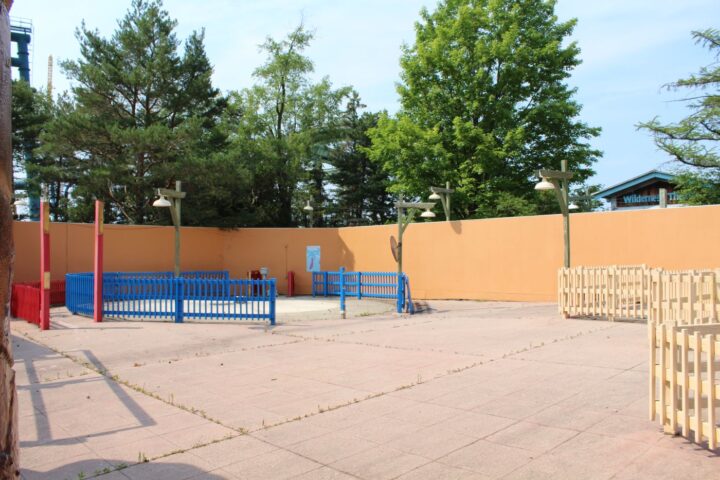 The Camp Cartoon area is also in desperate need of an overhaul. After losing two of the area’s rides in the last few years, this area would be another spot for a new flat(s) and possibly a compact coaster. 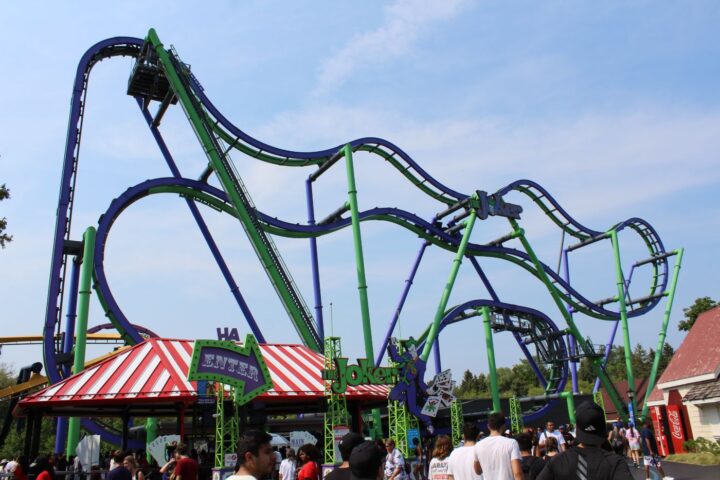 Yeah, Six Flags Great America has no trouble squeezing coasters into the park.

It felt so great to be back at Six Flags Great America. 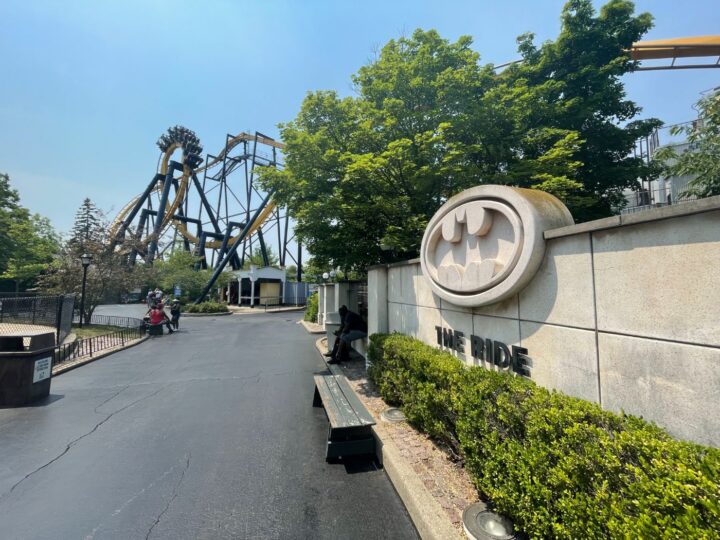 Distance does indeed make the heart grow fonder, but I’d rather that distance not be due to a pandemic. 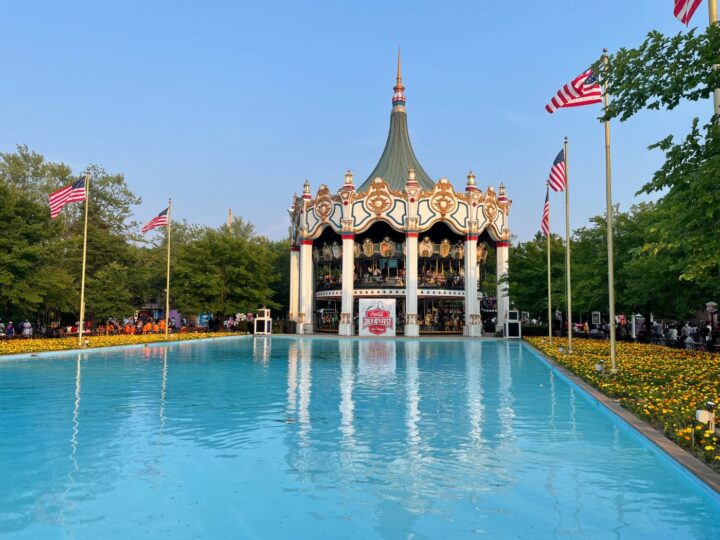 For visiting on a major holiday — on a weekend — I was surprised by how much I was able to ride, at least in the first few hours of the day. 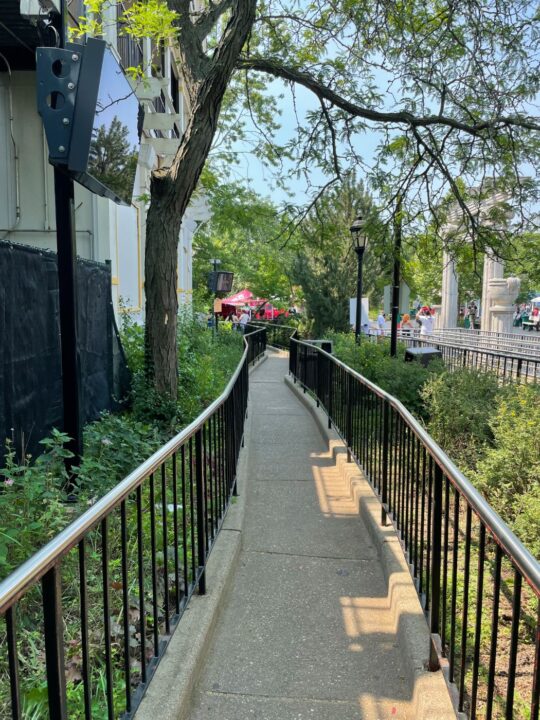 Get to the park early for no-wait rides on Goliath and the park’s other major coasters.

I can’t stress enough the importance of getting to this park as early as possible. 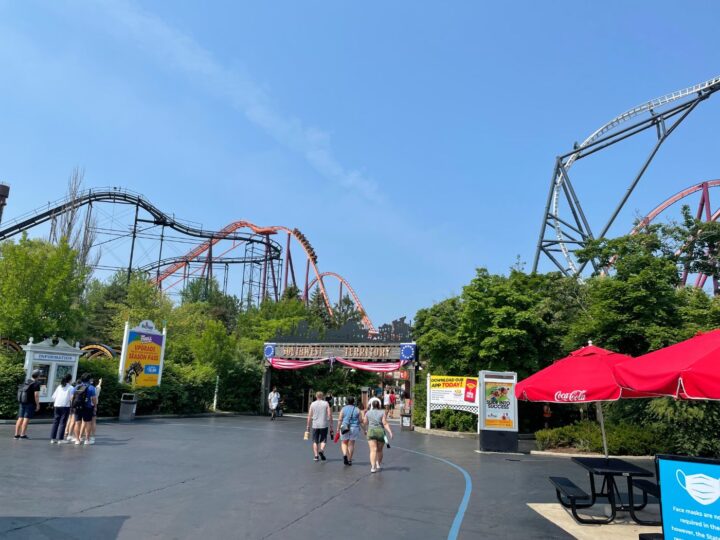 You’ll be able to hit most of the major coasters with short waits, if not walk-ons. 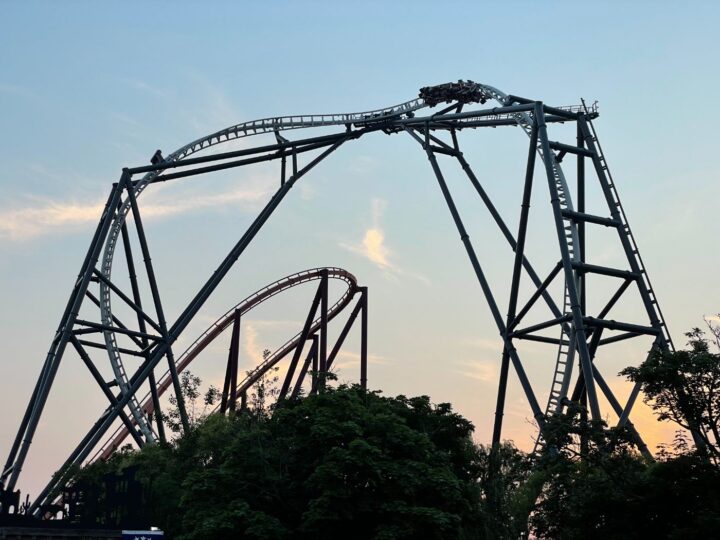 Goodnight, Maxx Force — until next time. 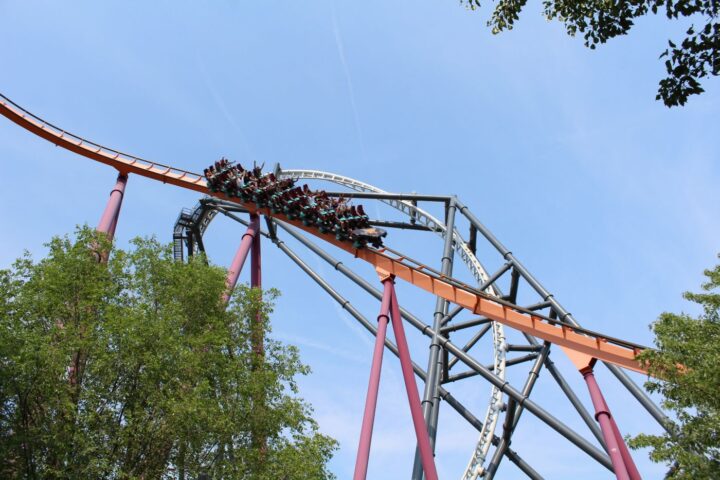 Have you been to Six Flags Great America since it reopened? Share your experience in the comments section below.