Inside The Creation of SeaWorld’s Coaster Coffee Co.

When thinking about grabbing a cup of coffee at a theme park, you probably envision something that ranges from a generic bakery to, if you’re really fancy, a Starbucks that may be disguised from the outside, but on the inside, isn’t too dissimilar from the one probably located a quick drive from wherever you happen to be reading this article. SeaWorld Orlando has taken the traditional theme park coffee concept and elevated it to new heights, with the addition of the Coaster Coffee Co., which recently opened at the park.

Located in a space formerly known as Cypress Bakery, SeaWorld Orlando’s Coaster Coffee Co. is no longer just an average in-park bakery, according to Jock Williams, the Vice President of Internal Revenue for SeaWorld Parks & Entertainment.

“It was just a normal run-of-the-mill, front entrance shop where you can grab a cup of coffee and a pastry or fruit and dessert,” he said. “But we knew the space was dated and we knew we wanted to do something different there. It was best place to try to ‘blow it out’ and do something better for the guests because it’s their first impression as they walk in the park.” 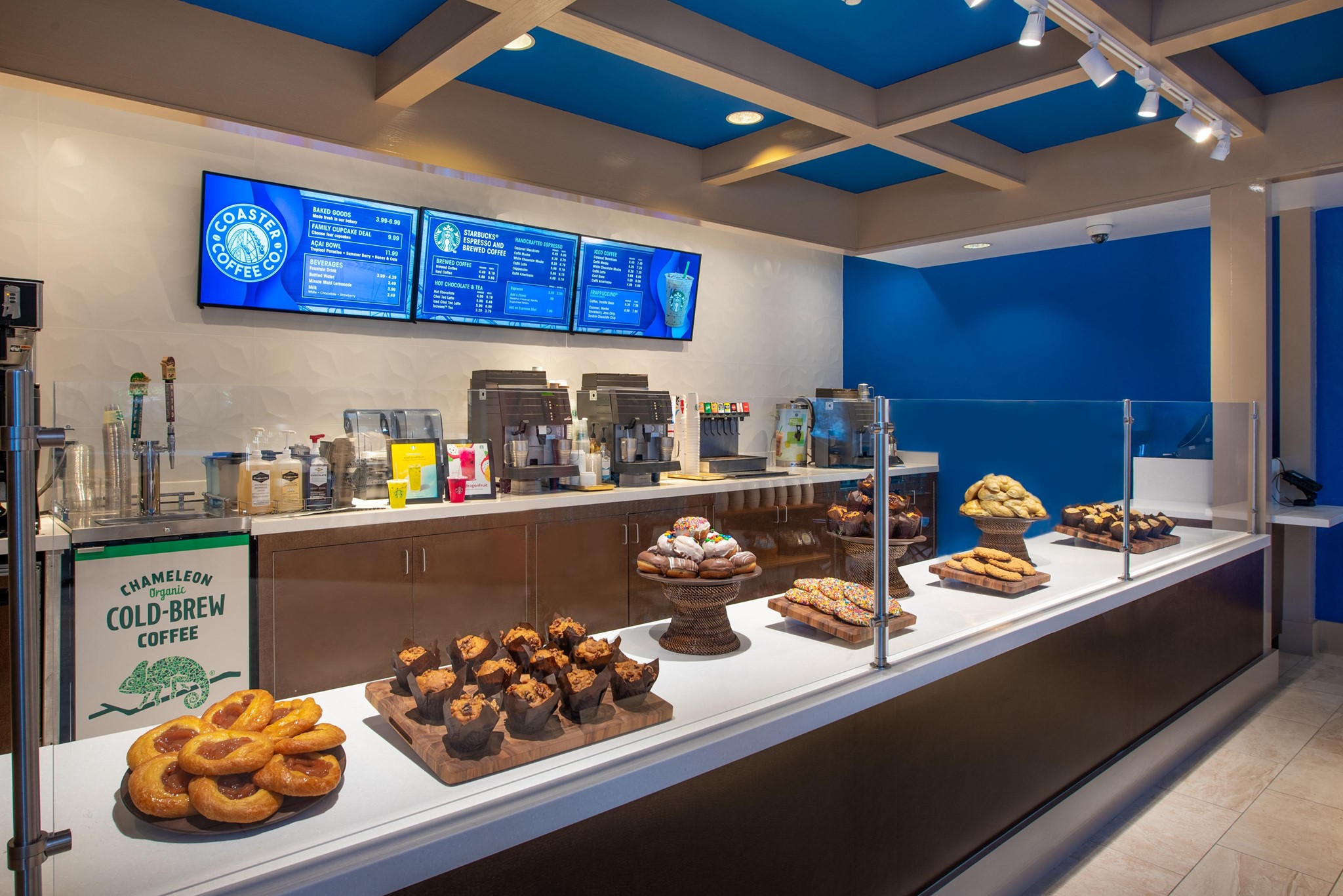 At its core, Coaster Coffee Co. is an in-park Starbucks, where guests can find their caffienated favorites like Frappacinos and Refreshers, but in reality, it’s much more than that. On the walls, you’ll find construction photos of multiple SeaWorld roller coasters under construction, exclusive Coaster Coffee Co. merchandise that you can only purchase in the shop, and arguably most-impressive, two working roller coaster models, inspired by SeaWorld favorites Kraken and Mako.

When the renovation was being discussed, the SeaWorld team decided to lean into the park’s thrill rides as the theme of the extreme makeover. According to Williams, it’s more common than one might think for an “outsider” to not realize that SeaWorld has a collection of world-class thrill rides amongst the aquatic life that calls the park home.

“It’s funny, even my own family members who live out of state, they say things like, ‘Wow, SeaWorld has roller coasters?!’ and I have to tell them ‘Yes, we have roller coasters and are a full=blown theme park!” Williams said with a laugh. “Not only do we care for the environment and the animals, but we also have fun rides. We felt it was important to help get the word out there and to pay homage to the great roller coasters that we have.

“With Coaster Coffee Co., we wanted to make sure that people understood, ‘Hey, not only are we called SeaWorld and focused on the environment and animals, but we can also have a really good time and put you on some world class roller coasters that will blow you away’,” Williams continued. “That was some of the inspiration behind the theme of the coffee shop.”

Even if you’re not a coffee drinker, the main attraction at Coaster Coffee Co. (at least based on the opinion of a website focused on roller coasters and theme parks), are the two large-scale working roller coaster models that are masterfully built inside a tight space along the shop’s walls. The roller coaster models were a product of an early brainstorming session that snowballed into a series of “wouldn’t it be neat if…” questions, according to Williams.

“When we do these things, we have no idea whether it can be done or not when we start talking about it,” he said. “It starts off as, ‘Let’s talk more about our coasters. Let’s see if we can incorporate some of those ideas into this new coffee shop.’ And then it turns into, ‘Wouldn’t it be neat if?’ Whenever somebody says that in the meeting, you know it’s going to be fun. Someone asked ‘wouldn’t it be neat if we could have a coaster that’s going around the whole shop?’ and that’s where it really got started. We had a variety of concepts, including a roller coaster that hung from the ceiling, but I think what we landed on was a pretty cool choice.” 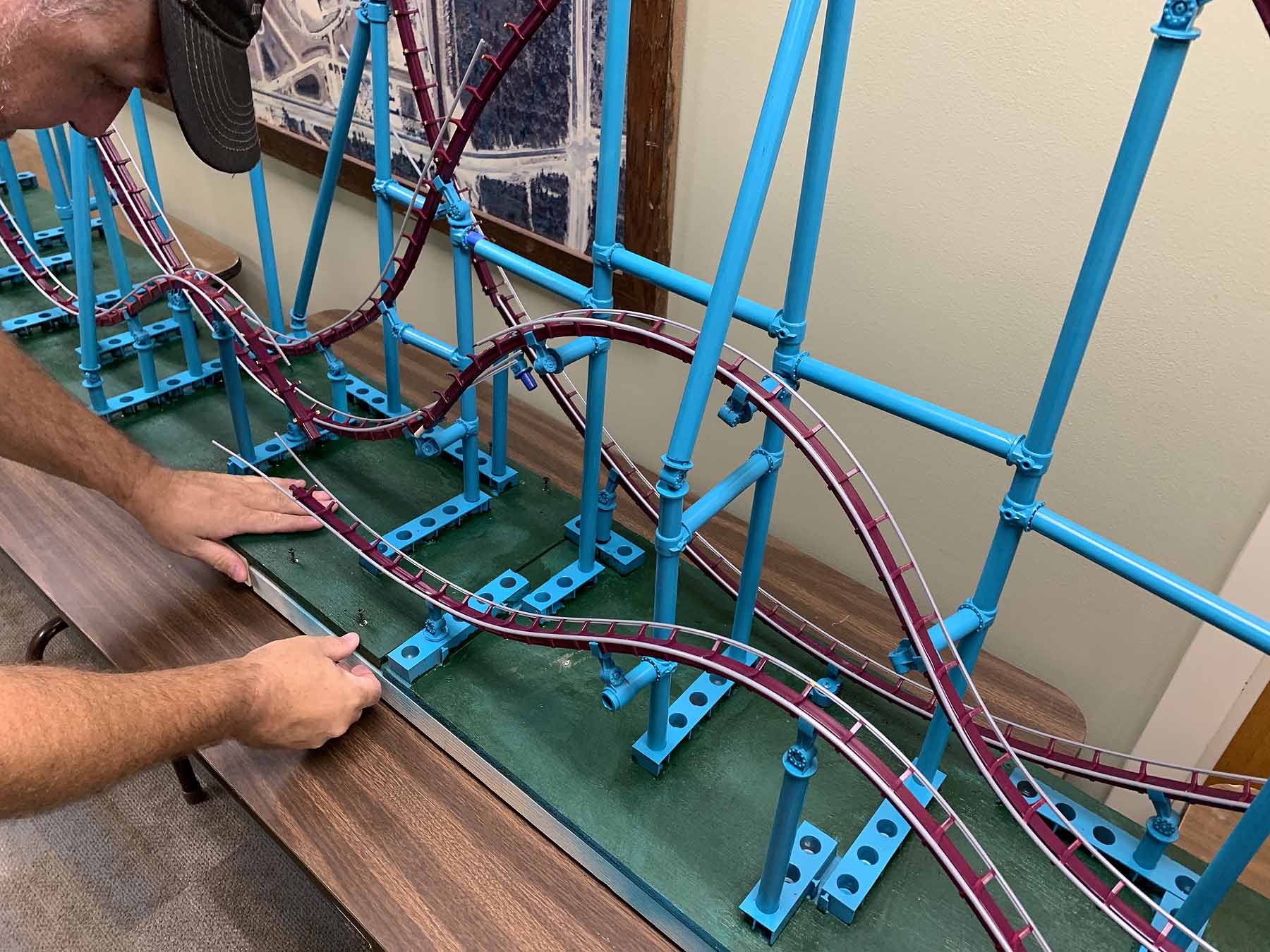 “I got the call from SeaWorld, and they told me, ‘I know this sounds strange, but we’re looking for a working coaster model in one of our new coffee shops. Would that be something you’d be interested in taking a look at’?” Gray recalled. “Of course, I was really excited and asked ‘When can we get together?’ It happened actually fairly quickly. A day or two later, I was over at the park. After going back and forth on a few ideas, I asked if we could look at planning them on the wall somewhere and doing some really big cool fun stuff. That’s kind of where it gravitated. We ended up with one-foot-wide area on both walls, one was ten feet and one was fourteen feet.” 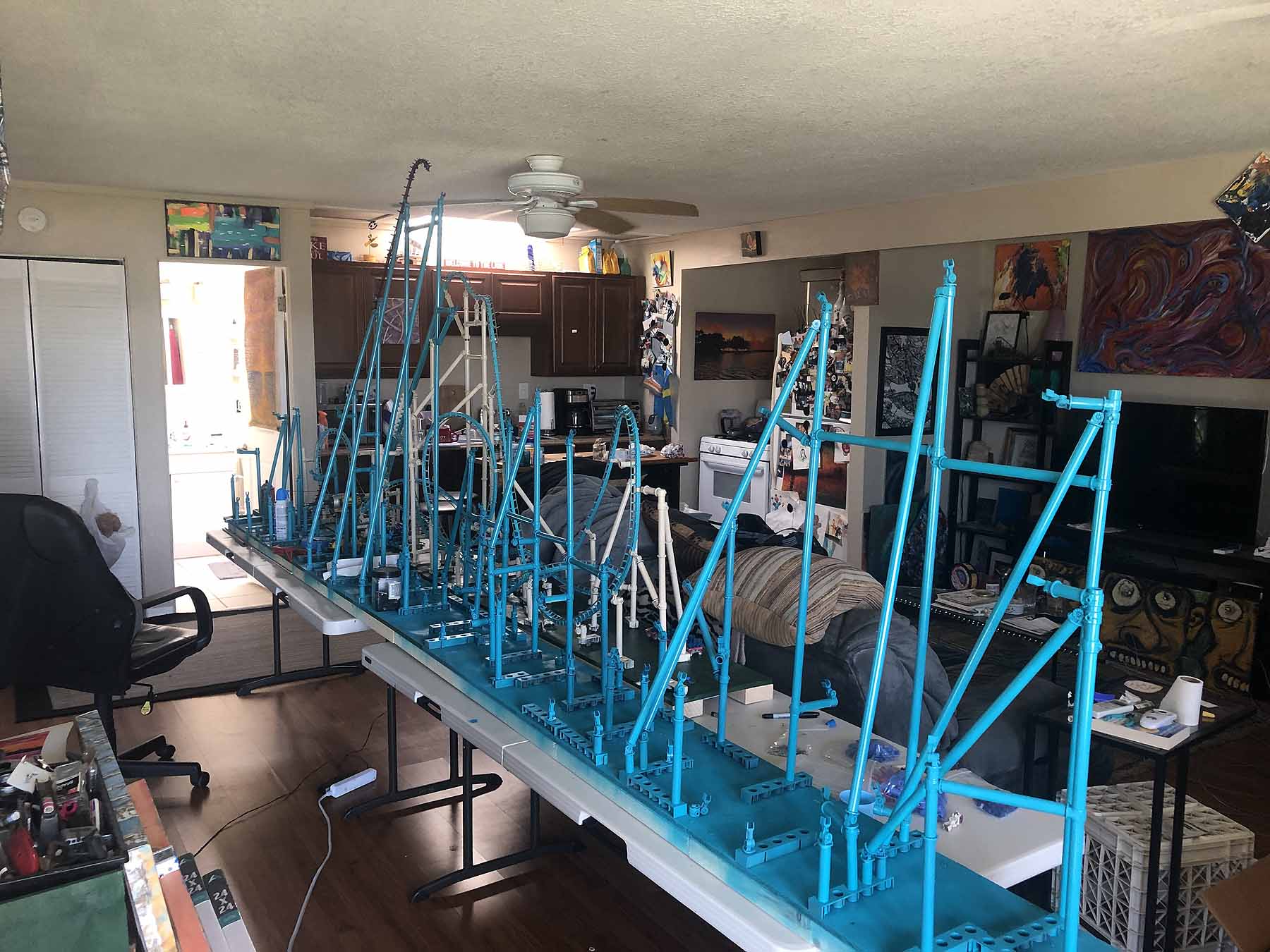 Coaster fans will know that both Kraken and Mako feature more L-shaped designs, which aren’t very conducive to the narrow space restraints. Gray was fortunately able to improvise enough to get the point across.

“They’re not exact replicas of the coaster layouts, but we’ll paint them the right color and we’ll just play with space but people will get it,” Gray said. “They’ll be able to look and say, ‘Oh, that’s like Mako’ or ‘Oh, that’s like Kraken. The idea was to have those iconic features in each one but ultimately, it became kind of a free-for-all for me. As an artist, that was great for me, because then I was just allowed to create whatever I wanted, but still make it look good with the thought of being this is Mako-like, or this is Kraken-like.” 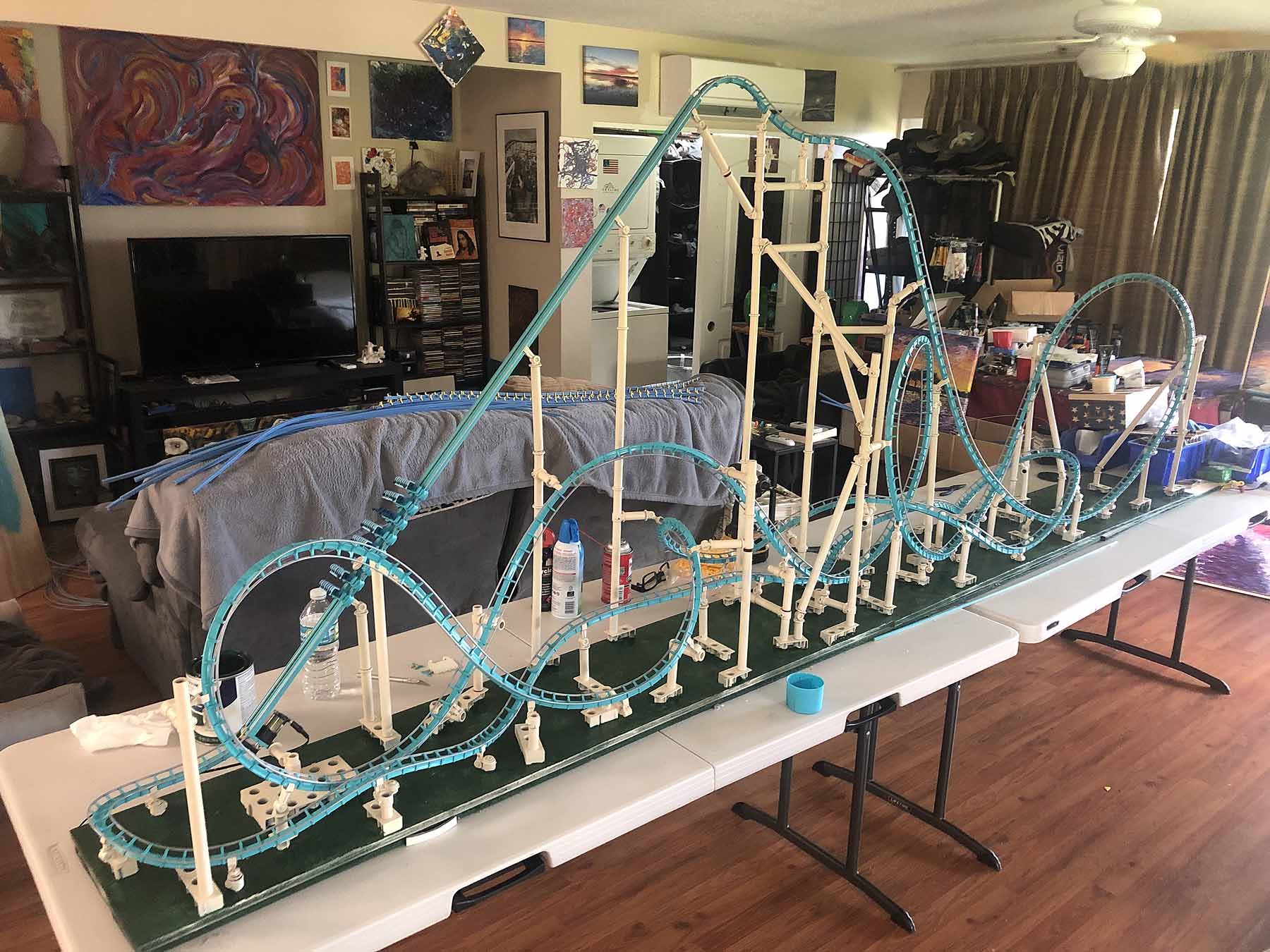 To build the models, Gray used pieces from well-known coaster model creators CoasterDynamix. Assembling the models in a 650 square foot cabin, Gray assembled the 10-foot-long Kraken-inspired model first, got it running, painted, and then started working on the Mako-inspired model, which clocks in at 14-feet long.

“I started working on Kraken and it took about four days to get the initial layout because of course, I wanted to keep some iconic loops and elements but at the same time, there was no way it could look like Kraken spot on just because of the limitations of the space,” Gray said. “Once I got it, I actually let it run for at least three days, ten hours a day, and then, of course, I started working on Mako and as that one was running, I was just trying to find out all of its nooks and crannies and where it needed to be stiffened up but it did something like ten miles a day.” 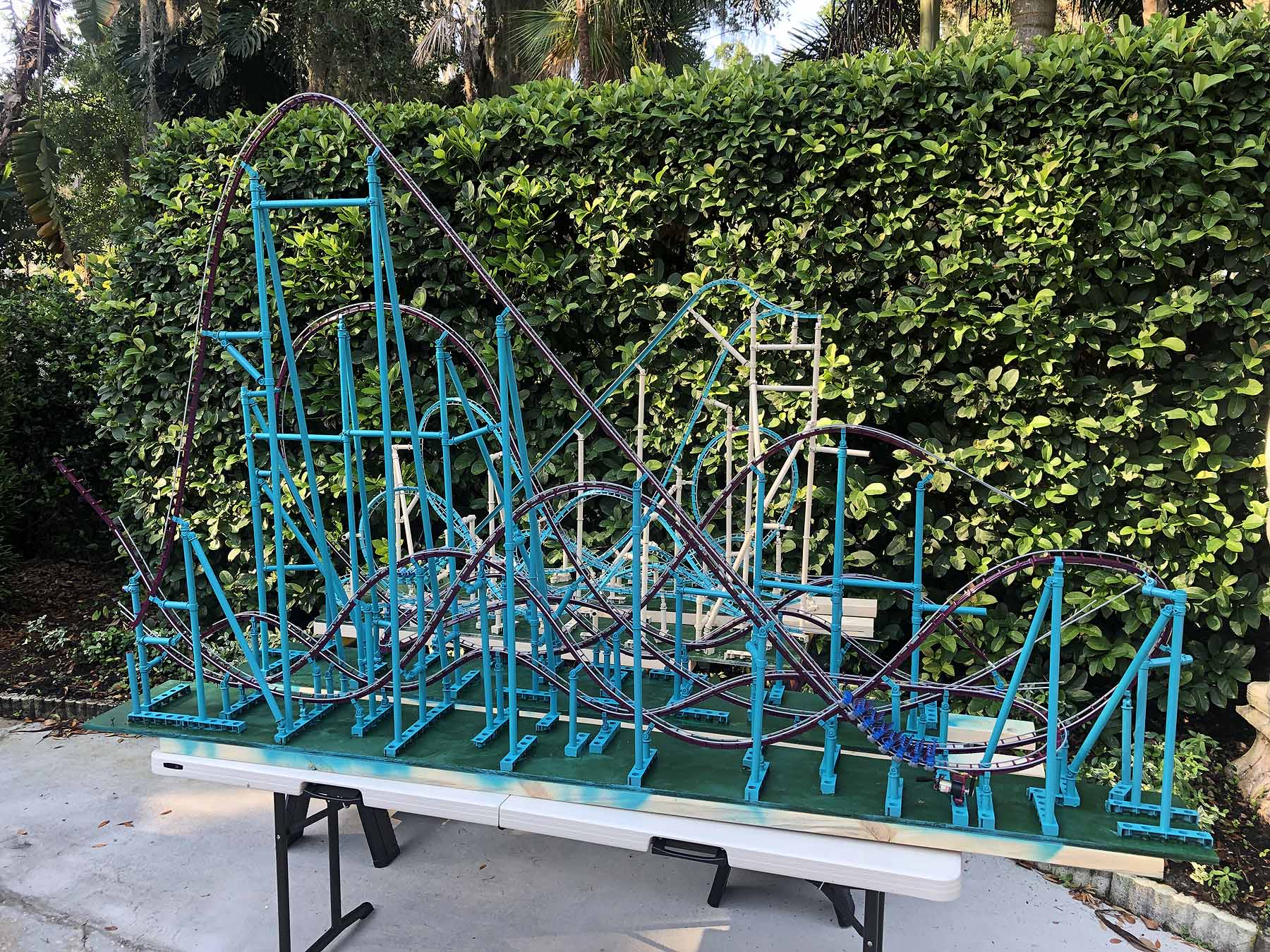 In total, he was able to assemble, disassemble, paint and reassemble both models in just over two weeks’ time. For Gray, a seasoned CoasterDynamix veteran, there were some CAD-drawings when creating the models, but his experience with the parts made the builds easier. 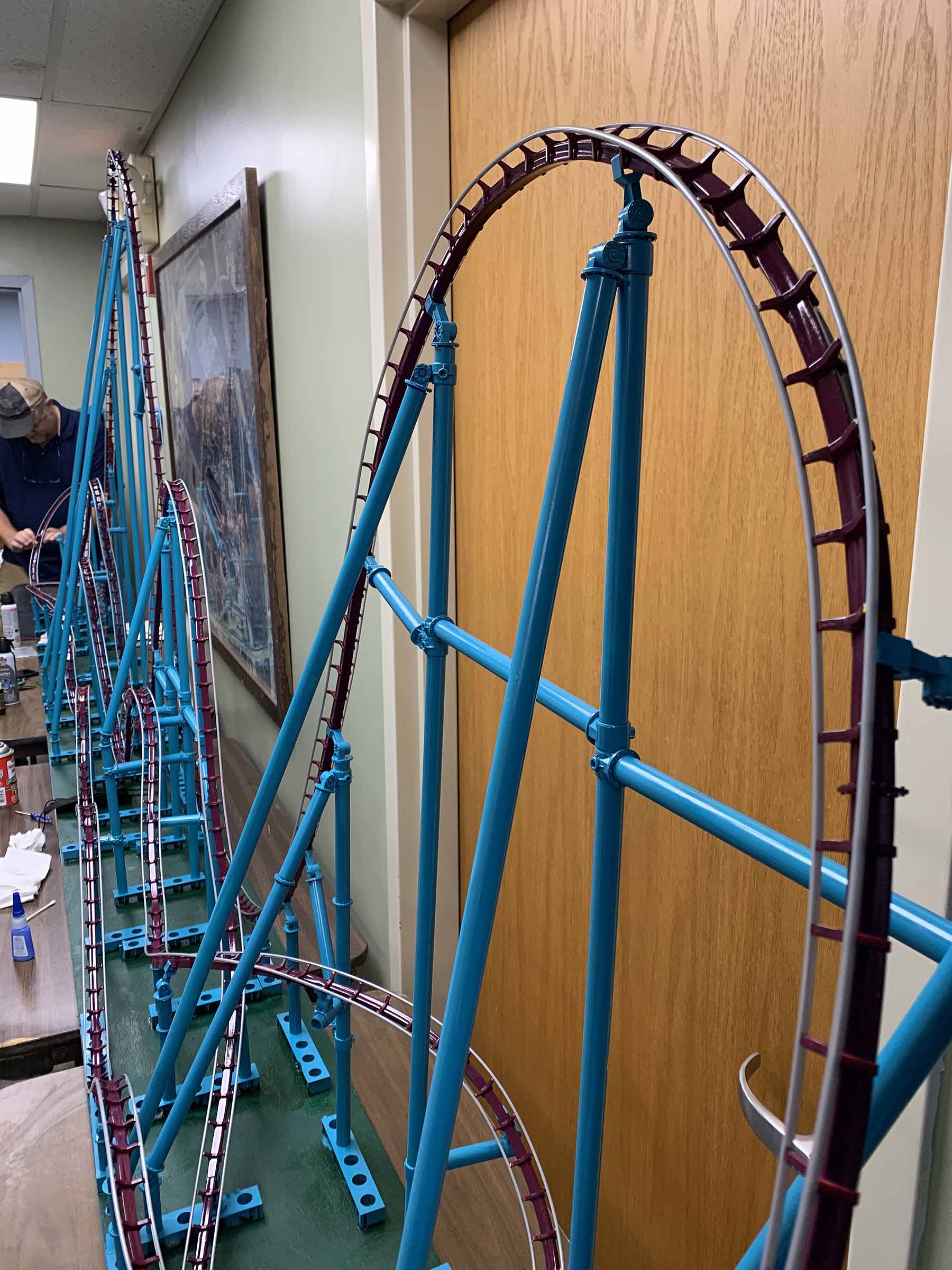 “I would do a basic line AutoCAD drawing for SeaWorld to say ‘this is what’s going to happen in this space.’ Gray said. “It got really close but ultimately ended up being a little different from the original drawings. I’ve built these Coasterdynamix kits now for years and years and years and you just know what it can do. I think on the Mako, I only did three drop tests on it, for three different elements, on the whole thing and the rest of it I just knew it was going to work. It’s a matter of doing it so many times. Mako really turned out the way I had thought in my head — as in we’re going to go back and forth across this thing twice, so it’s literally fourteen feet four times until it gets home.”

Working in tight confines was no issue for the 20-plus year seasoned design veteran.

“Even inside of AutoCAD, it’s very easy for me to get a good idea of where I’m at three-dimensionally very quickly,” he said. “It’s just the way your brain is programmed, I think. I was actually more worried about trying to make this thing work on the top of the ceiling than I ever was about using just one foot of space. Ultimately, it’s just a matter of making the profile look really pretty and fun and intriguing enough to make people want to stand there and watch it.”

Williams likens the experience of watching the models to watching SeaWorld’s aquatic life through the glass of one of the park’s many exhibits, and it’s been a hit with guests.

“When Mom and Dad are getting their morning coffee, juniors can go over and watch the roller coaster models go up and down. It’s fun for the whole family,” he said. “People love our aquariums at SeaWorld. Not that this is actually an aquarium, but it’s just another feature that people hear about. Then when they come into the park, they ask, ‘Where’s that Coaster Coffee Company place? I need to go see the models.’ Then it just takes in a life of his own and people just have to come see it just for the models, more so than wanting a cup of coffee and maybe they’ll get a cup of coffee or pastry while they’re in there.”

Coaster Coffee Co. has a wide variety of roller coaster themed merchandise, from CoasterDynamix nanocoasters and coaster cutouts of SeaWorld’s thrilling attractions to a series of Coaster Coffee Co. branded apparel and drinkware. 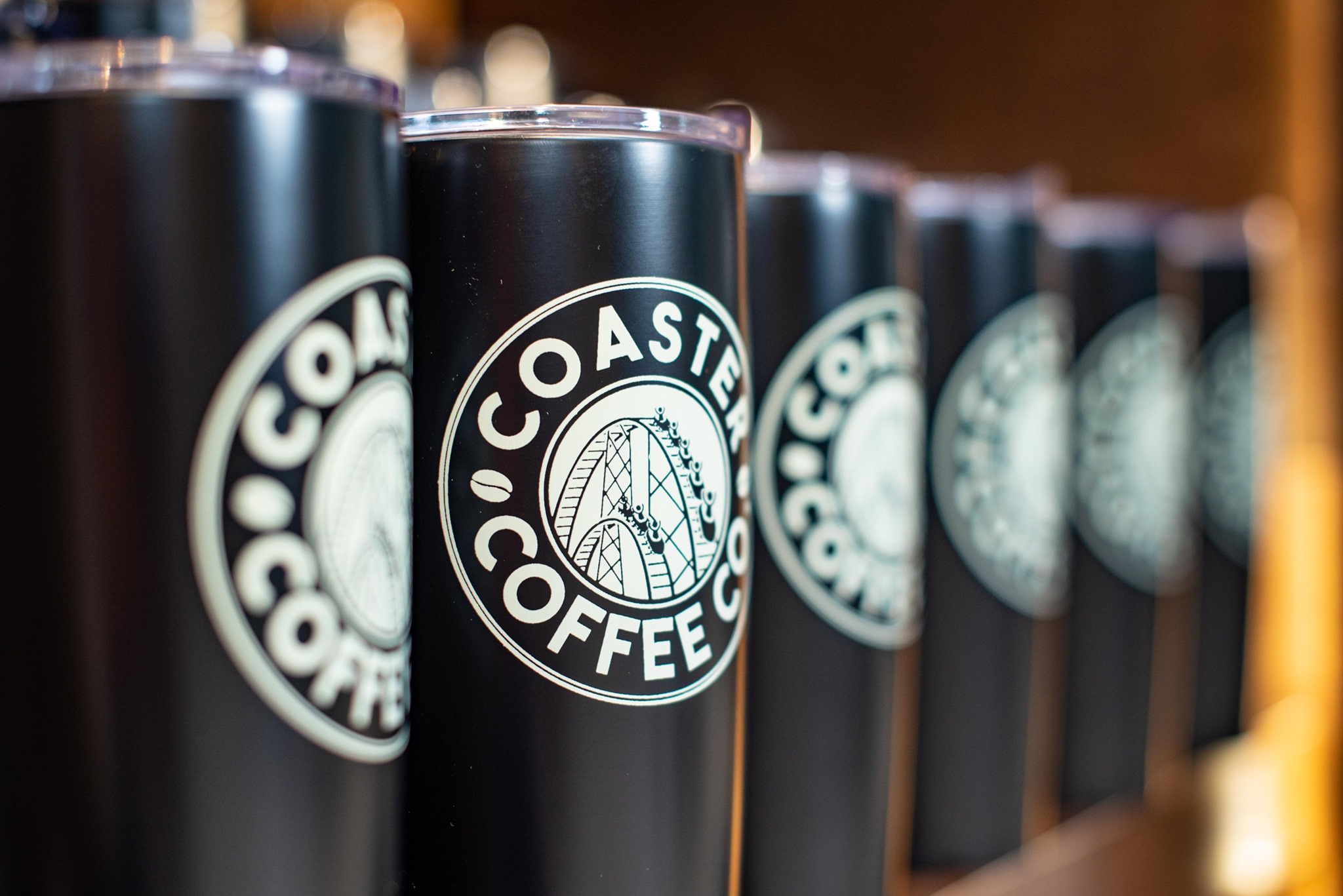 Combining food and beverage, signature retail, and the attraction of the two working roller coaster models, the Coaster Coffee Co. is a unique model that SeaWorld has begun to create in several locations throughout the park, designed as a “one stop shop” for any theme park guest — they truly get a bit of everything the park has to offer in one place.

“We’re enjoying be able to give our guests the full ‘theme park’ experience in one location, and not just one aspect of it,” Williams said. “We’ve tried to wrap it all into one package to make it easier for the guests to enjoy a little bit of everything the park has to offer.” 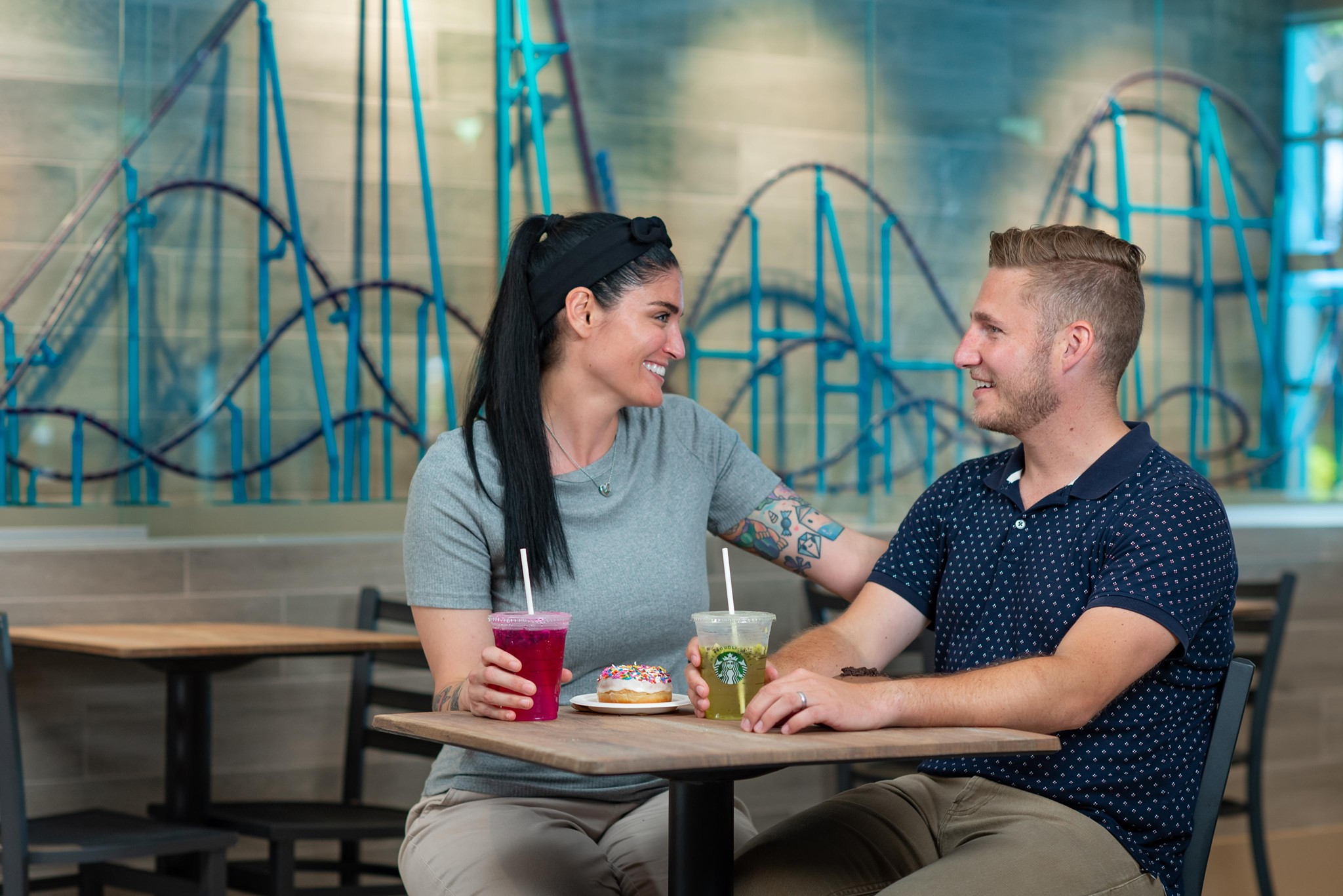 Guests have flocked to the new shop since its opening several weeks ago, but in case you need one last sales pitch on why you should visit, Williams has you covered.

“At Coaster Coffee Co, not only can you get the full range of Starbucks coffee and wonderful pastries that are made here fresh in our bakery every morning,” he notes. Not only can you also get the exclusive cool retail items that we have inside. But then you can see two working roller coaster models in motion. It’s really the only place where you can see all three elements of a theme park in one location. It’s really, really cool from that aspect.”