Half of the Coaster101 team ventured to Atlanta last month to visit Six Flags Over Georgia. Two in the group, Mike and I, had been to the park. The other two, Kyle and Nick, were SFOG newbies. We spent 1 1/2 days at the park and were able to ride all of the (operating) coasters. 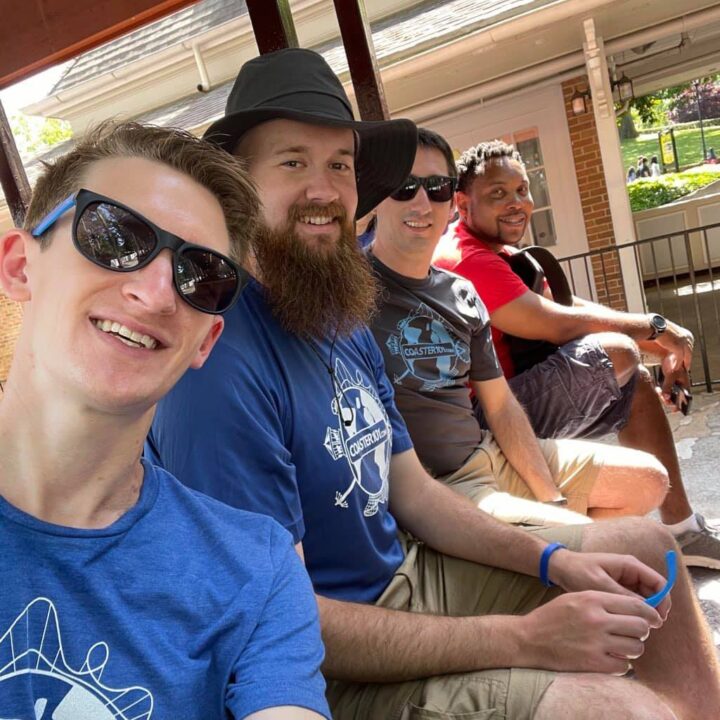 Coaster101 writers (from left to right) John, Kyle, Nick and Mike at Six Flags Over Georgia

After the trip, I wanted to get Kyle’s and Nick’s initial reactions to their time at Six Flags Over Georgia. Here’s what they had to say:

Which Six Flags Over Georgia coasters or attractions were you most excited to ride?

Kyle: Six Flags Over Georgia has always been on my to-do list, but I purposely didn’t do a ton of research before our visit. Some rides that I knew I wanted to get on were Twisted Cyclone, Goliath and Mindbender. I had my hopes up that Mindbender may be open by the time of our visit, but alas it was not. 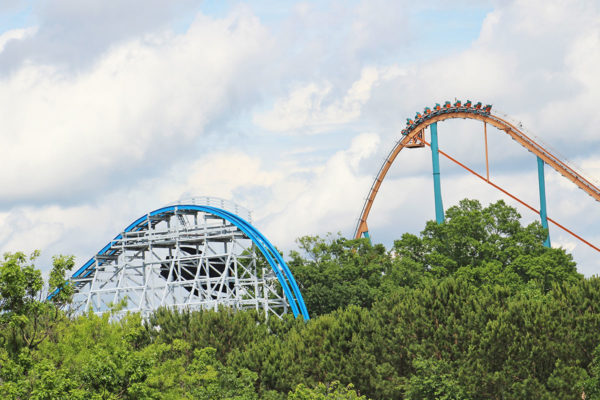 What were your initial impressions upon entering the park?

Kyle: After the long hike from the parking lot (and we were in the preferred parking), I was just happy to finally be in the gate! I loved how quaint the main plaza was, very much like a much smaller version of Main Street USA. The whole front section of Six Flags Over Georgia definitely has that small-park feel, which is sometimes missed at the regional parks.

Nick: It was a bit of a shock in the sense that my last two visits to a theme park were to Dollywood and before that, Walt Disney World in February 2020. Both of those parks are known for being clean, beautiful, well-themed, and some of the friendliest staff you’ll find anywhere. Six Flags was a bit lacking in those departments. We saw trash in a queue line on Friday and when we rode again on Saturday, over 24 hours later, the same trash was still there.

I wouldn’t say any of the employees were actively rude, but they did not have the same level of friendliness as Dollywood (but few parks do). However, many of the guests in the park were rude and didn’t respect the comfort or the safety of other guests. We saw multiple rules being broken: line cutting, smoking in line, talking on a cell phone while on a roller coaster, etc. 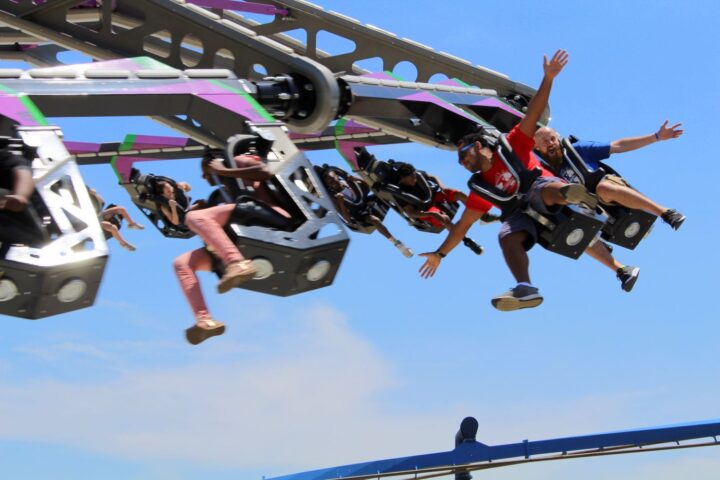 As with most parks, there are some really nice, beautiful areas, and other areas that need improvement. The area around the carousel and antique autos is wonderfully shaded by very tall trees while the area around Batman the Ride is a miserably crowded dead-end with no shade.

What was the surprise hit of your visit?

Kyle: For me, Twisted Cyclone far exceeded my expectations. It wasn’t that I was expecting a flop, but I did not realize how much of a punch this 100-foot coaster would pack. I think I underestimated it just based on its size and relatively short layout, but the ride was intense and had some of the best pacing I’ve ever experienced on a coaster. 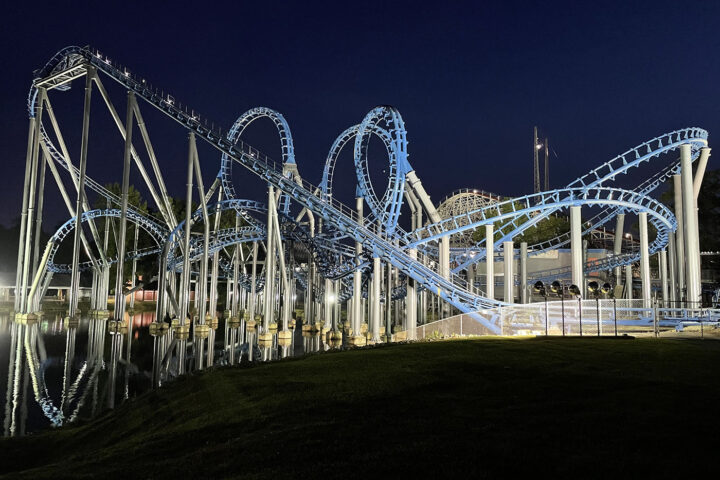 Nick: I was a little bit surprised by Blue Hawk, which has a very negative reputation, because it wasn’t as rough or painful as I thought it would be!

I didn’t know much about Monster Mansion and was really surprised that the ride exists in a Six Flags park  (and I hope they keep it around for a long time). 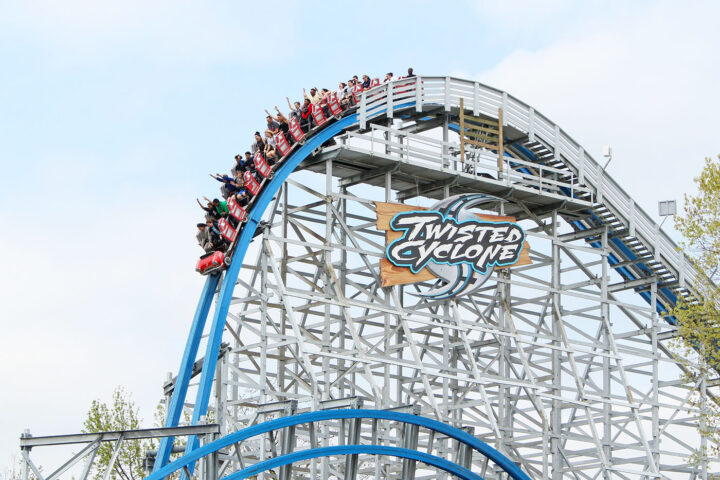 But the biggest thing that surprised me was how much I loved Twisted Cyclone. I knew it would be good, like an 8 out of 10, but it really ended up being a 10/10 for me. I love this totally underrated ride. 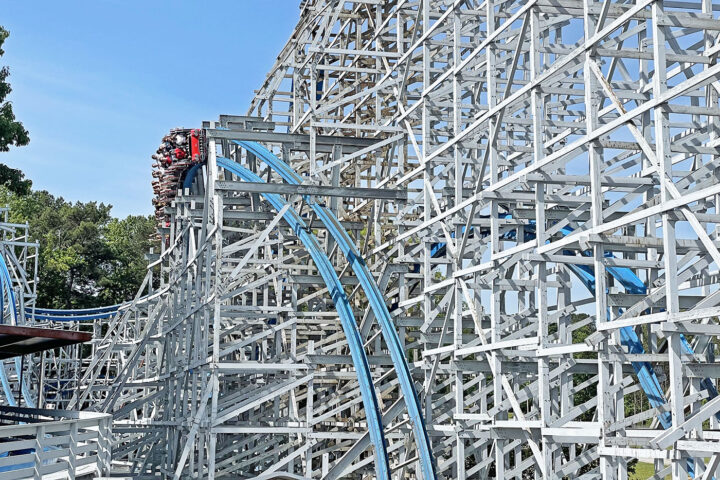 It doesn’t look like much, but man is it action-packed: the pacing is flawless, there are no bad elements, no dull moments, it’s just non-stop fun. I don’t really rank coasters, because it’s hard to compare two rides you rode a decade apart, but if I did, Twisted Cyclone would probably crack my top five.

I would go as far as to say Twisted Cyclone is a masterpiece in design and engineering by Rocky Mountain Construction. They created the perfect layout for the minimal structure they had to work with. When RMC was transforming Mean Streak at Cedar Point into Steel Vengeance, they had a huge canvas to work with. Mean Streak’s structure was massive, leading to endless possibilities. When it came to Georgia Cyclone, the canvas was very small. 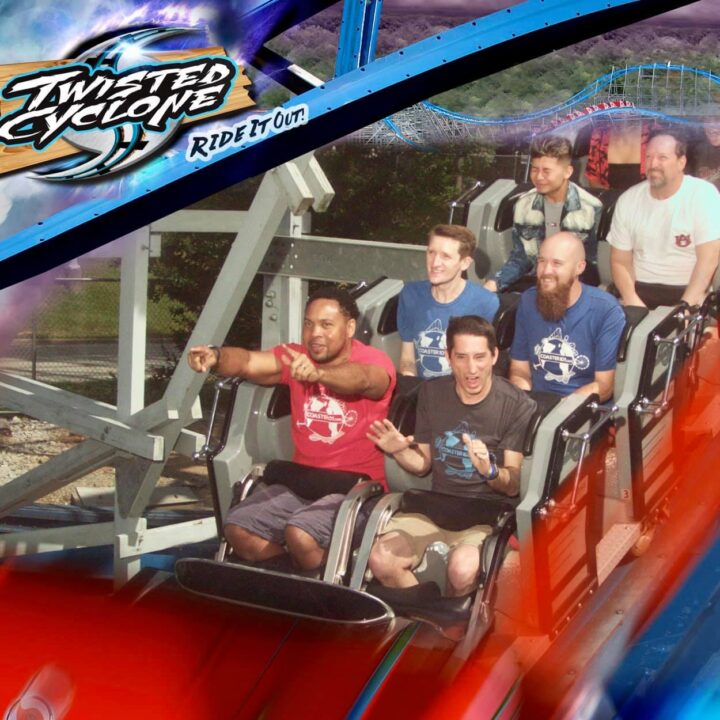 The Coaster101 Team on Twisted Cyclone

Despite not having much existing structure to work with, RMC delivered a stellar ride.

Were there any letdowns?

Kyle: Other than (Riddler) Mindbender being closed still, I was a little disappointed with the ride experience of Great American Scream Machine. 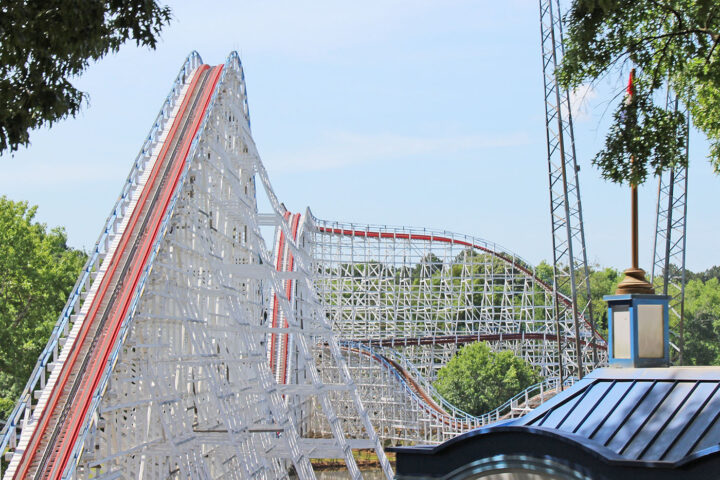 It was probably one of the two most rough coasters I’ve been on. With my back a little out-of-whack to begin with, the old woodie did not help it. The first two hills were great, but the back 3/4 of the ride definitely needs some track love. 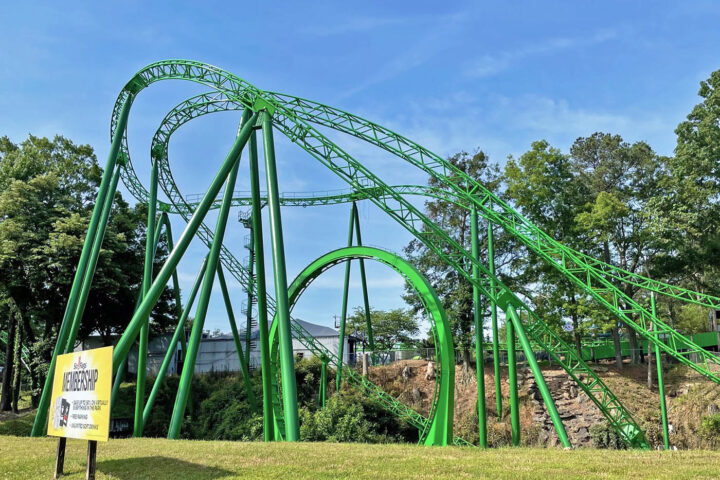 The Riddler Mindbender at Six Flags Over Georgia will open later in the 2021 season.

Nick: Riddler Mindbender being closed was obviously a huge letdown, but we kinda knew going in the chances of it opening were slim. As with most parks, it takes too long to get food. But the biggest letdown for me was Dare Devil Dive. I was expecting more out of it. 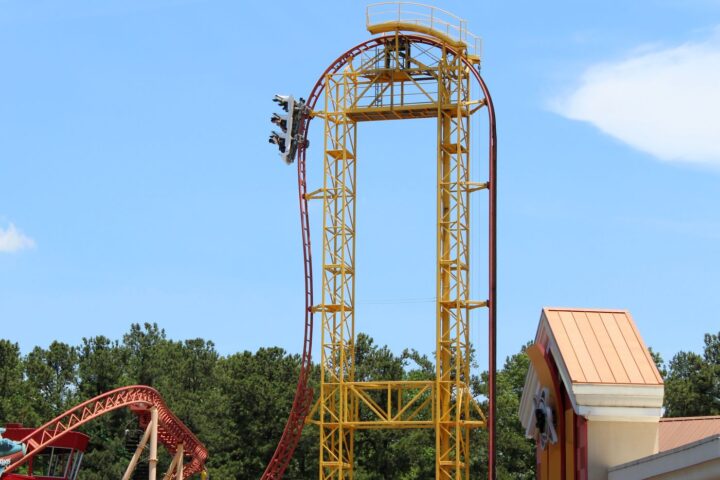 First, the capacity: a park the size of Six Flags Over Georgia should NEVER build a major roller coaster that only sits six per vehicle and only operates three vehicles at a time. Even a small B&M dive coaster could have had double that capacity. 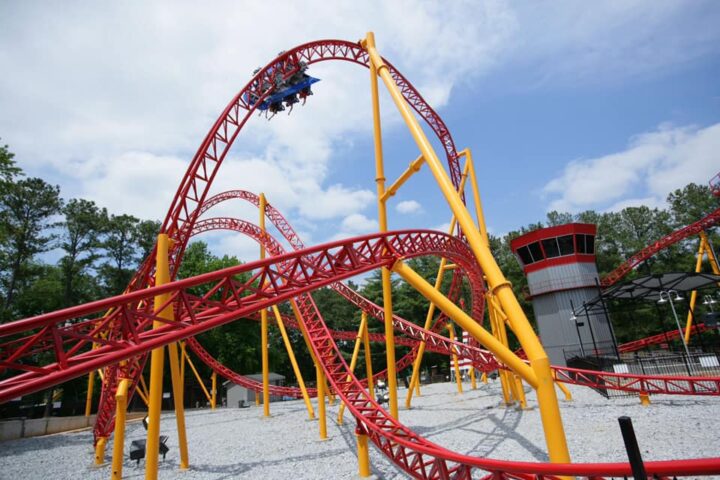 The ride is super smooth and the lapbars are a huge improvement in comfort over Dollywood’s Gerstlauer, Mystery Mine. But Mystery Mine is longer, does more, and is better-themed. In the end, Dare Devil Dive is just kind of a forgettable coaster, and I was hoping for more.

How does Six Flags Over Georgia compare to other Six Flags parks?

Kyle: I think if we compare ride quality, it is right in line with the other parks in the chain. The most recent Six Flags park I’ve been to is Great America and I think it still edges out Over Georgia slightly. 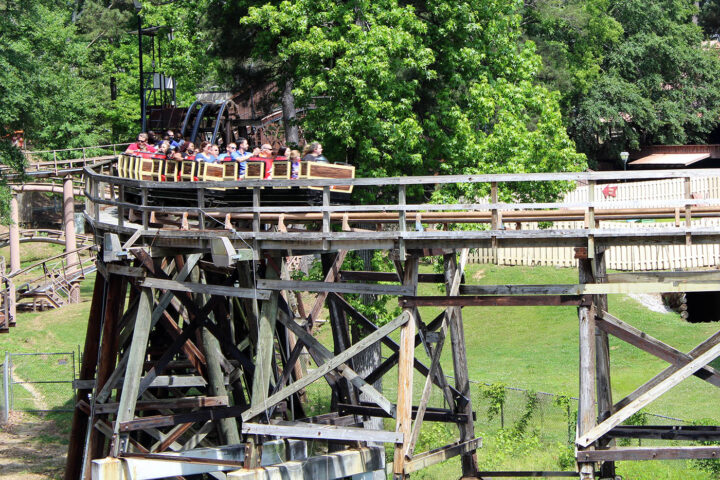 The park does have some rides that help differentiate it from other similar parks; the Dahlonega Mine Train has a unique 3-lift hill layout and the Monster Mansion boat dark ride was actually really well done!

Nick: I was impressed with how quick and easy it was to get into the park, as I did not have the same experience and was met with long lines trying to get into Great America and Great Adventure. The fact they have two dark rides is nice, but parks like Great Adventure have better coaster collections.

What tips do you have for someone who’s visiting Six Flags Over Georgia for the first time?

Kyle: I think the biggest problem we ran into was trying to ride Batman: The Ride later in the day. 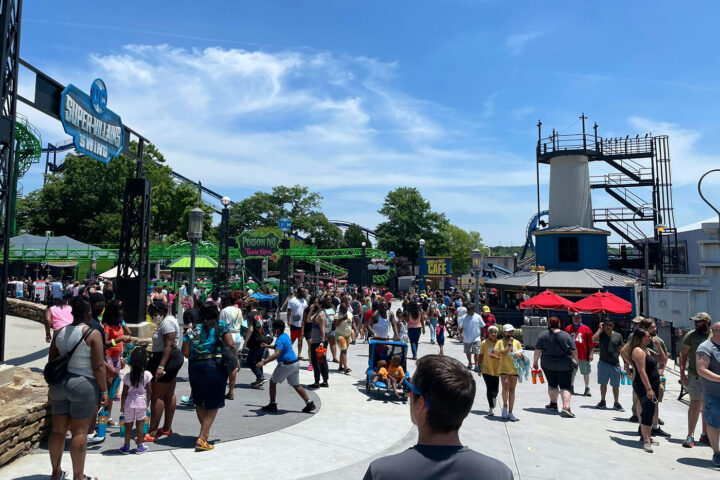 The whole Gotham City section was almost twice as crowded as the rest of the park, not to mention that in the heat of the day it was nearly 5-10 degrees hotter back there. Most of the park has some shade available but Gotham City sits on a giant concrete slab with no break from the sun. My tip would be to run to Dare Devil Dive first thing (because the line will back up later on) and then immediately jump down into the next door Gotham City and hit up Batman. 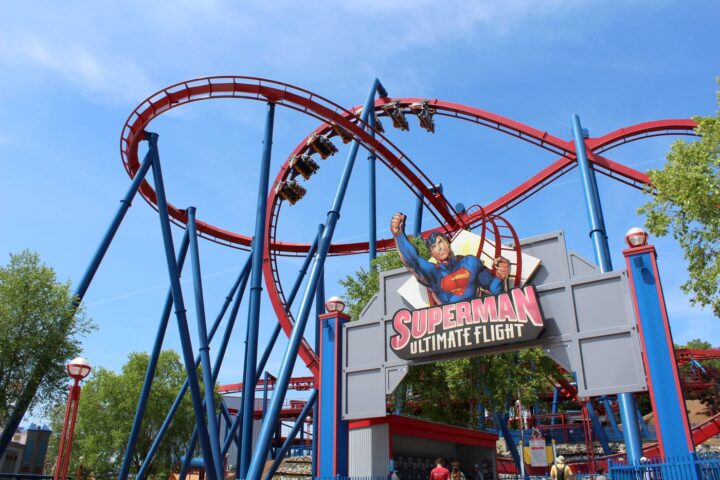 Nick: We asked our readers on Twitter and Instagram for some tips before our trip and I’d give the same advice they did. Do Dare Devil Dive first due to the terrible capacity then head to the back of the park for Superman and Justice League, then start working your way back towards the front. Get to the park early. Even though the posted opening time was 10:30 a.m. on Saturday it seemed like Georgia Scorcher and Twisted Cyclone had riders on them at 10:15, if not earlier. 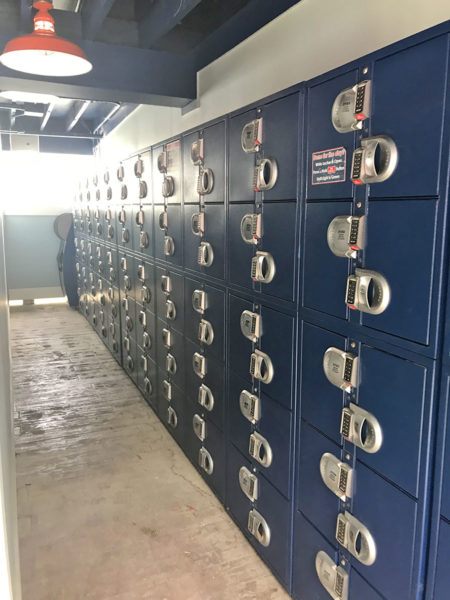 I would recommend not bringing a bag into the park unless you have a friend who will be the bag holder while you ride the coasters. The locker situation is a mess. Most are located right at the entrance of the coasters with only two kiosks to get a locker which creates a confusing cluster of people blocking the entrance to the ride.

What’s one roller coaster or attraction that Six Flags Over Georgia is missing?

Kyle: A good GCI woodie. Overall the park has a great selection of coasters, a lot to choose from and they are all different, but every park needs that good twisting wooden coaster. I’m a big Mystic Timbers fan, and something like that would be perfect to round off their coaster lineup.

Nick: Any launch coaster would be nice as that’s the biggest piece missing from their coaster collection. It was really hot there, so any water ride would be a welcome addition. 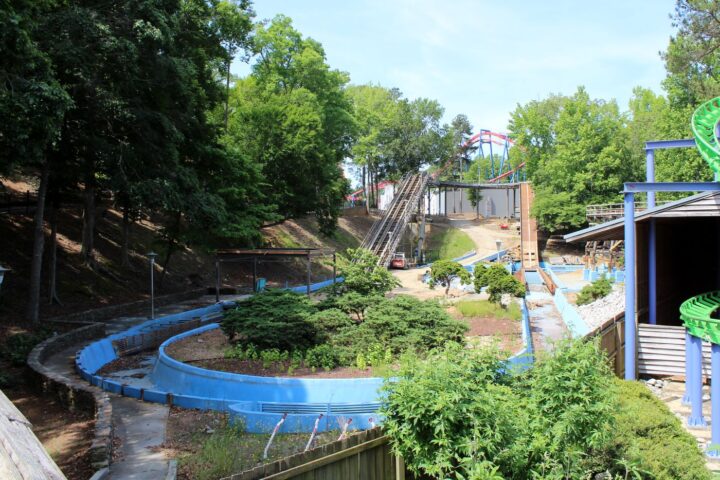 I could see a Mack PowerSplash going in the spot where the boat ride used to be (pictured above).

How would you rank Six Flags Over Georgia’s coasters? (excluding Riddler Mindbender, which was closed for refurbishment)

Nick: Twisted Cyclone and Goliath are world-class coasters worth traveling far distances for, but after that, there is a big drop-off in appeal for me. Really, 3-7 could be changed in another order depending on how I’m feeling that day.

Watch video from our day at Six Flags Over Georgia below:

Read our Twisted Cyclone review from the coaster’s media preview.

Have you visited Six Flags Over Georgia? Share any tips or tricks you have for first-time visitors in the comments section below.