Myrtle Beach and the surrounding area have had their fair share of amusement parks and tourist attractions that have come and gone over the years. However, the area’s newest attraction, The Funplex, fits thrills into an insanely small footprint by amusement park standards — 18,000 square feet to be exact. (For those keeping score at home and looking for a comparison, Men In Black: Alien Attack at Universal Orlando has a footprint of 70,000 square feet alone.) 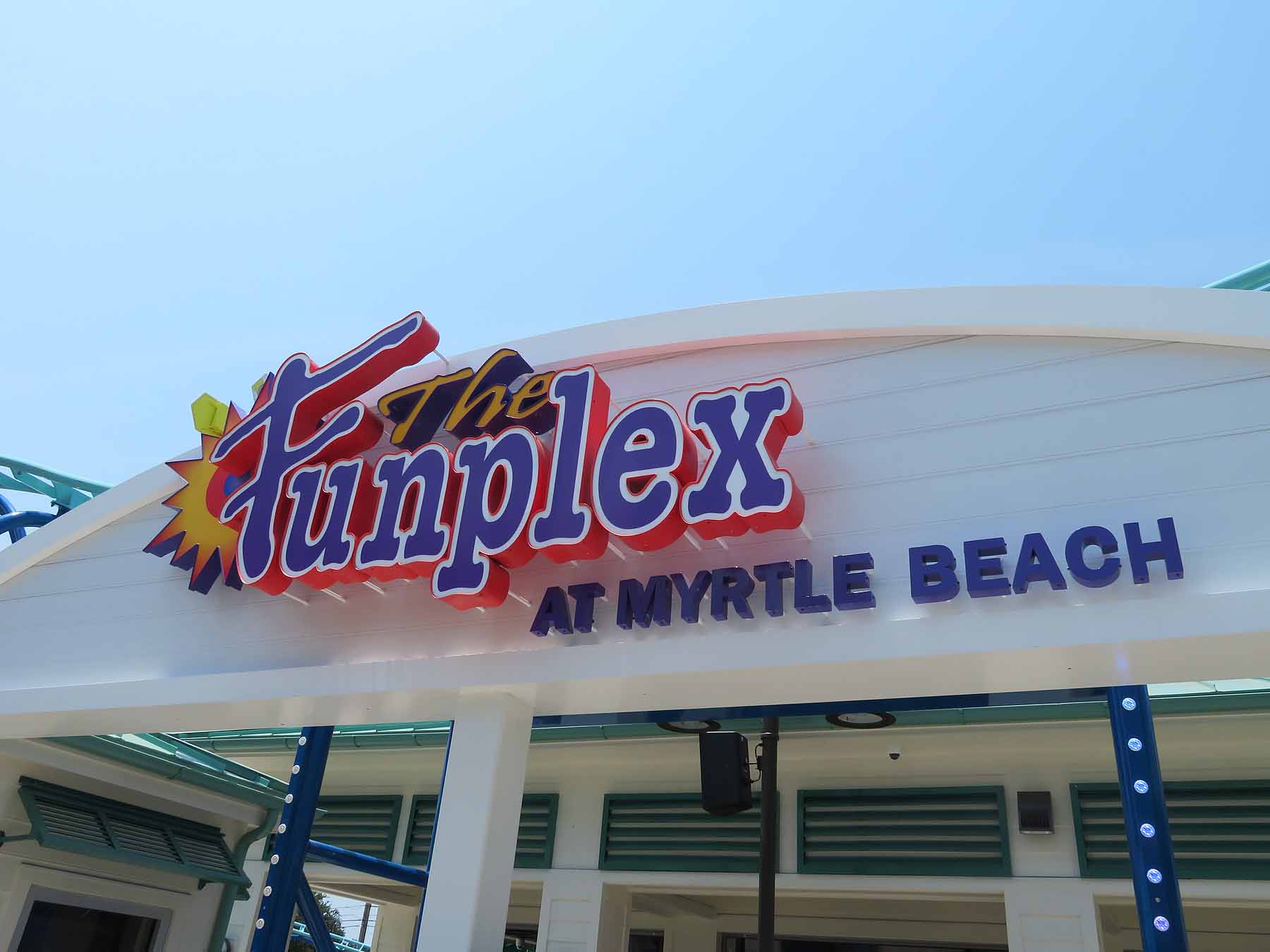 “Every inch of this park has been planned as strategically as possible and we made the most of what we had to work with,” noted Funplex General Manager Michael Baumann, a lifelong theme park fan whose career in the industry has included stops at Mountain Creek Amusement Park (formerly Action Park) in New Jersey, New York’s Coney Island and Universal Studios Hollywood. “The great thing is, as long as we’re turning the rides over, we can continue to serve as many guests as we can.”

Inside the Funplex’s compact location, there are seven rides, all manufactured by Italian ride manufacturer SBF-Visa, as well as a full service bar & grill, known as Off the Coast. It’s not just a clever name. Located on Ocean Boulevard, Myrtle Beach’s “Grand Strand,” guests at The Funplex are quite literally walking distance to the Atlantic Ocean. The park doesn’t charge an admission fee, and instead offers a pay-per-ride model, designed to attract passerby on Ocean Boulevard and from the surrounding hotels.

Instead of traditional ride tickets, guests can purchase a pre-loaded Fun Card with credits to experience each of the attractions, which range in cost from 4-8 credits for each ride. 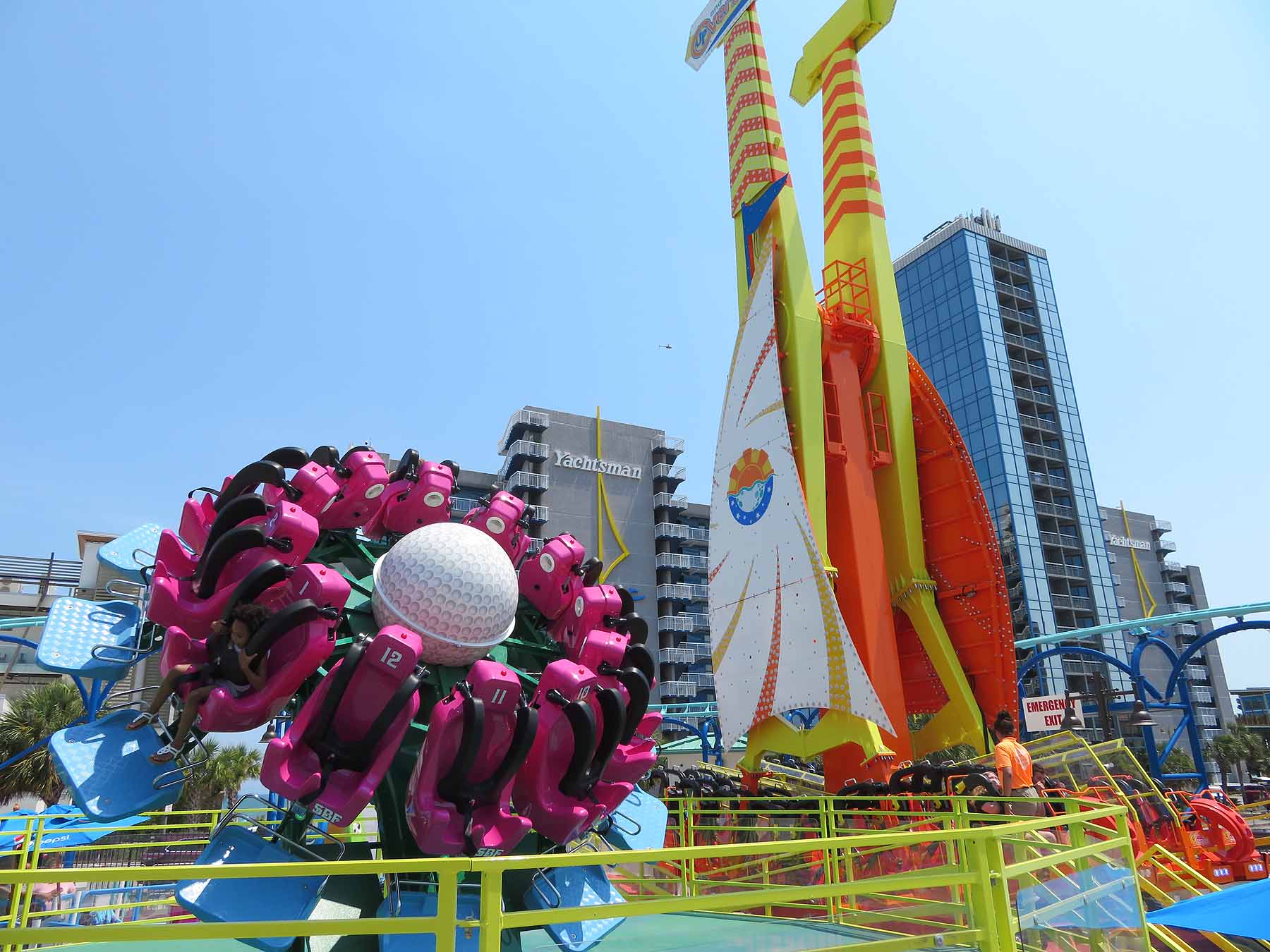 “We want everyone to feel like they can come in, maybe an hour and a half, two hours length of stay and be able to get on all the rides and attractions, be able to get some food, a drink, and then, they feel like they had a nice day at the park,” Baumann said. “Anyone that’s going to be walking down from any of these hotels is going to see the Funplex. You want to make it nice and easy and convenient for them to come in. That’s why you’re paying no admission to come in. You pay to play.” 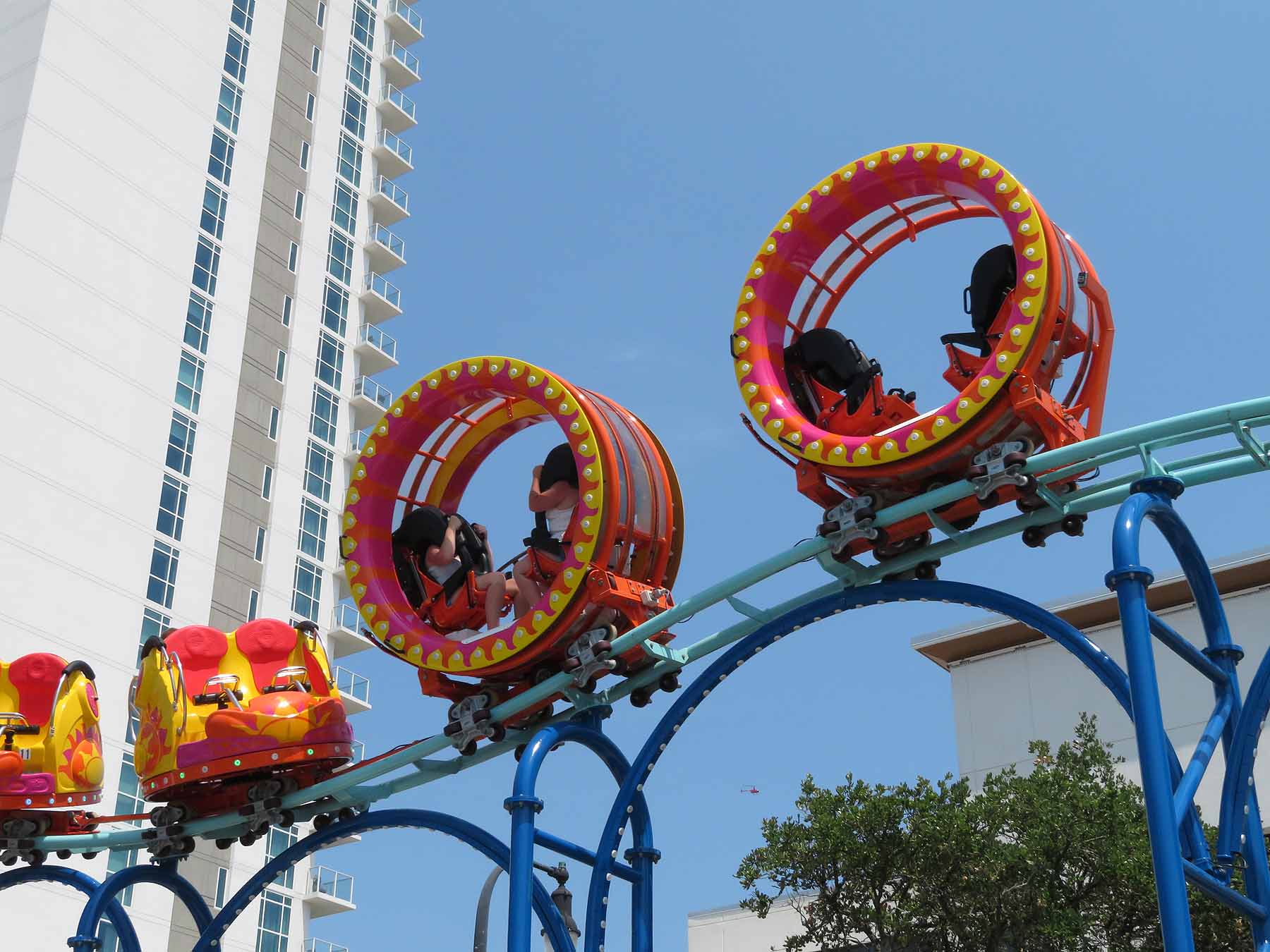 Encircling the park’s 18,000 square feet is the park’s signature attraction, the Fun in the Sun roller coaster, a “Big Air” model from SBF-Visa. This coaster is probably more well-known (affectionately!) as “The Hamster Wheel” by theme park and coaster enthusiasts. Trailed by three of SBF-Visa’s traditional “spinning” cars, the trains on the coaster are led by two circular free-spinning cars, certain to send guests “head over heels.” One of only three “Big Air” models currently operating in the United States, Fun in the Sun is the longest version of the coaster produced to date. In the early days of park operation, it has proven to be a hit with guests, but is also a point of pride for the Funplex

“Oh, we’re proud of it,” Baumann said. “I’ve already been contacted and seeing a lot of coaster enthusiasts coming to get their try on this ride which is exciting. Just to have our hands on something like this, with it being the longest and one of only a few coasters of this model type does mean a lot. We want to make sure we’re doing it the right way and eliminating as much downtime as we can. We’re really excited and guests have been overwhelming. During our opening weekend, it was our number one ride in terms of ridership.” 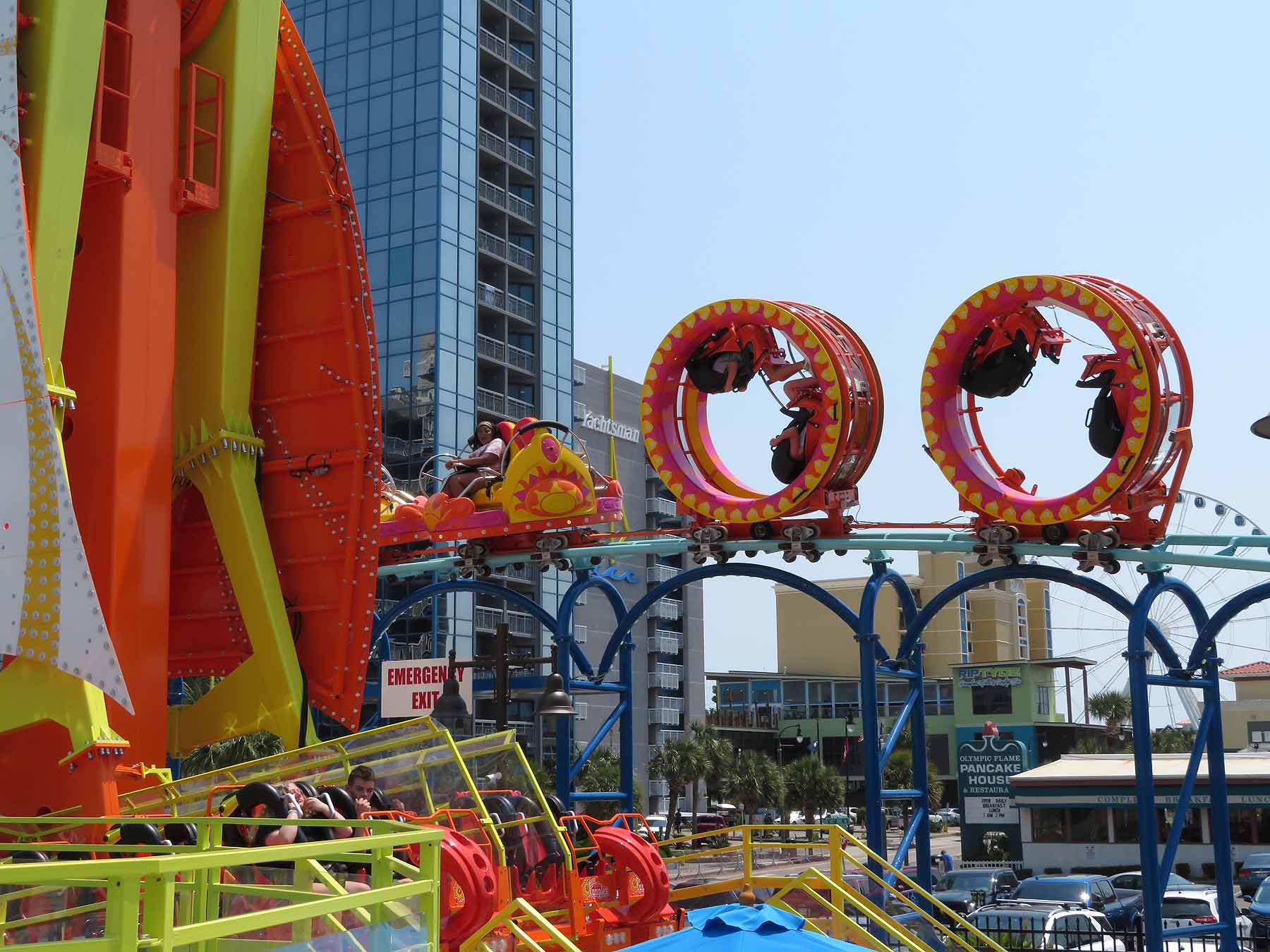 Having experienced Fun in the Sun in one of those “hamster wheel” cars, it can be said that this roller coaster isn’t your average “family” roller coaster. Depending on the weight-balance of the ride vehicle, you might find yourself upside-down more often than right-side-up. (I flipped at least 16 times during my one ride, and that number may actually be higher, because I honestly lost count sometime in the middle of my third lap around the track.) That said, I was not the only one taking on the unique ride experience in the “hamster wheel”

“The thing that I was most surprised about is how many people are actually going in the first two cars. I thought it would be more of a balance to the back ones, but I am seeing kids that meet the higher requirement and were going on this,” Baumann said with a laugh. “We actually just had a shoot this morning and it was his first time on a roller coaster and they went into the hamster wheel. It’s scary but it also has an appeal to it where it is not too much and overwhelming. We’re not scaring any of our guests from trying it which has been really exciting.” 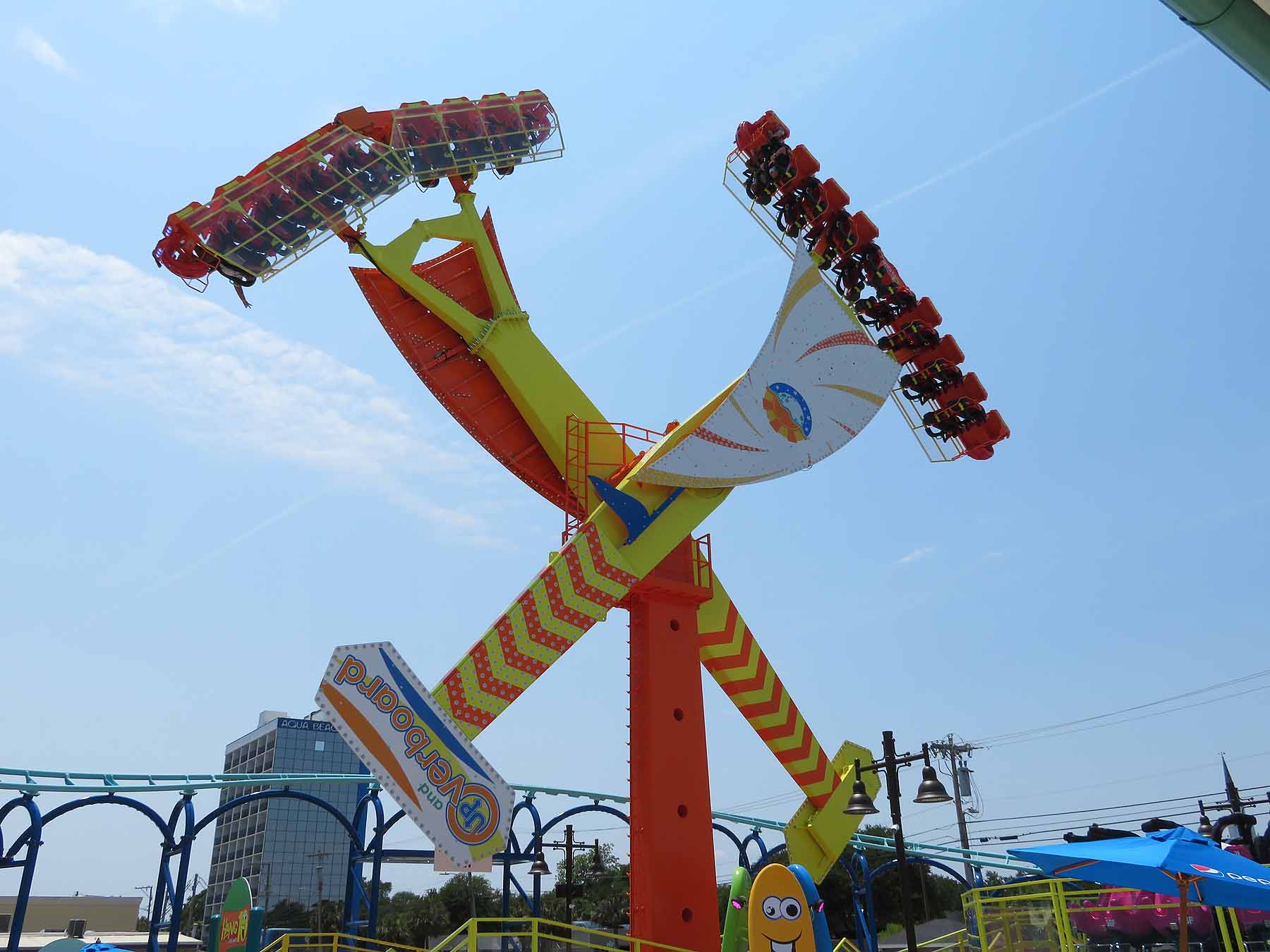 Completing the currently operating ride package as of this writing are Up & Overboard (SBF-Visa Space Gun), Sky Velocity (SBF-Visa Drop-n-Twist), Hook & Slice (SBF-Visa Reverse Time), Hang 10 Silly Cups (SBF-Visa Cups) and the Sunny Day Swing (SBF-Visa Toy Swing). Each ride has a unique lighting package that will sync together for a nightly light show at The Funplex. 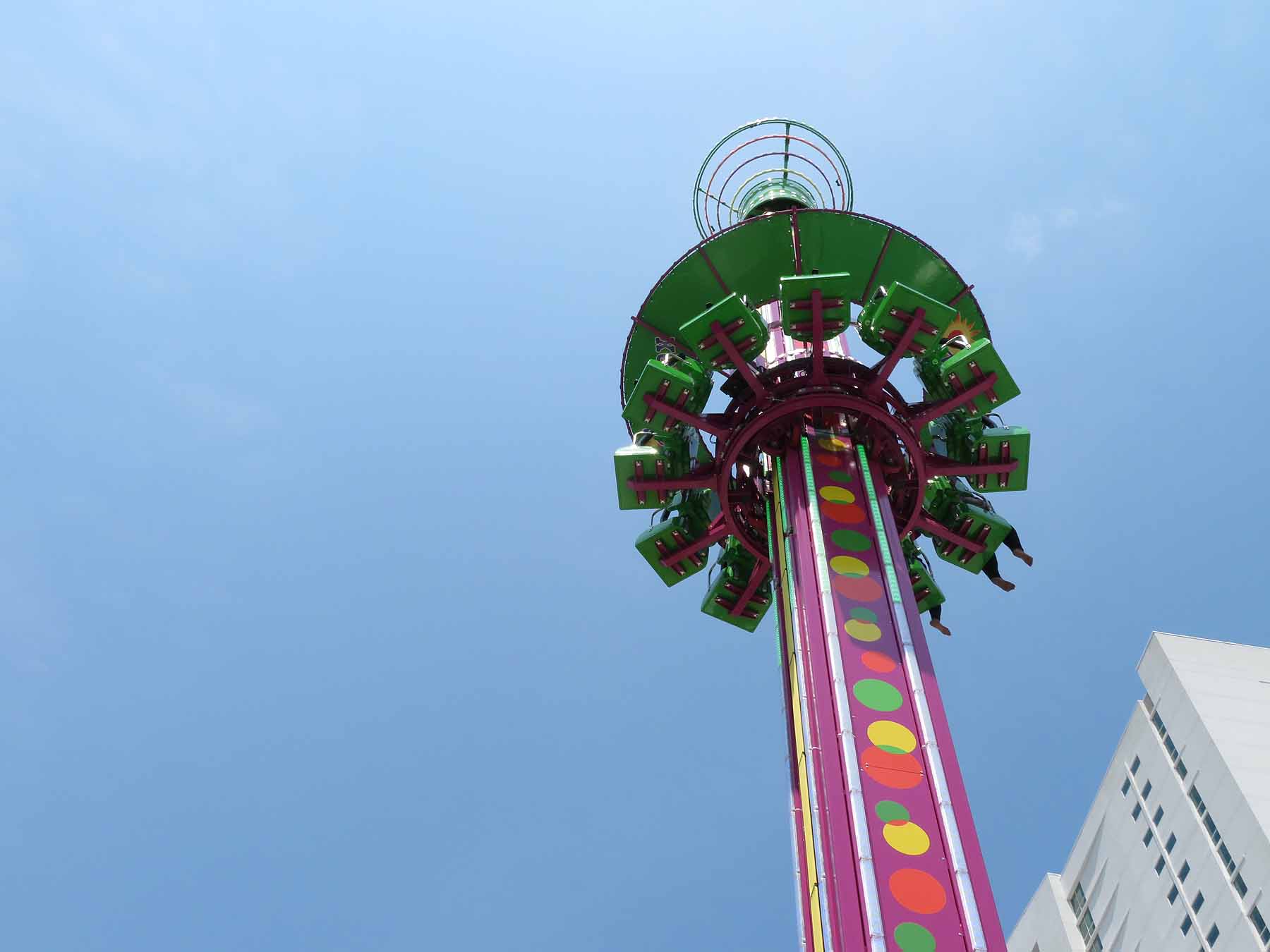 The other ride we experienced during our visit was Sky Velocity, which ascends to heights of 65′ while rotating, providing views that can be best described in Myrtle Beach lodging terms as “partial ocean views.” There are multiple drops as part of each ride sequence, and it provides a nice pop of air on each drop.

Completing the ride lineup is Mach Fun (SBF-Visa Tower Planes), a first-of-its kind ride in North America, which is not quite open yet. This is largely due to travel restrictions between the United States and Europe caused by the COVID-19 pandemic, but the Funplex Myrtle Beach team is working hard on the ride to get it open as soon as possible.

“It’s just out of our control, but we will make sure that the ride is as ready as it can be so that the second they come over here, there’s no further delay. We’re on it and we’re ready to get that ride opened!” Baumann said. 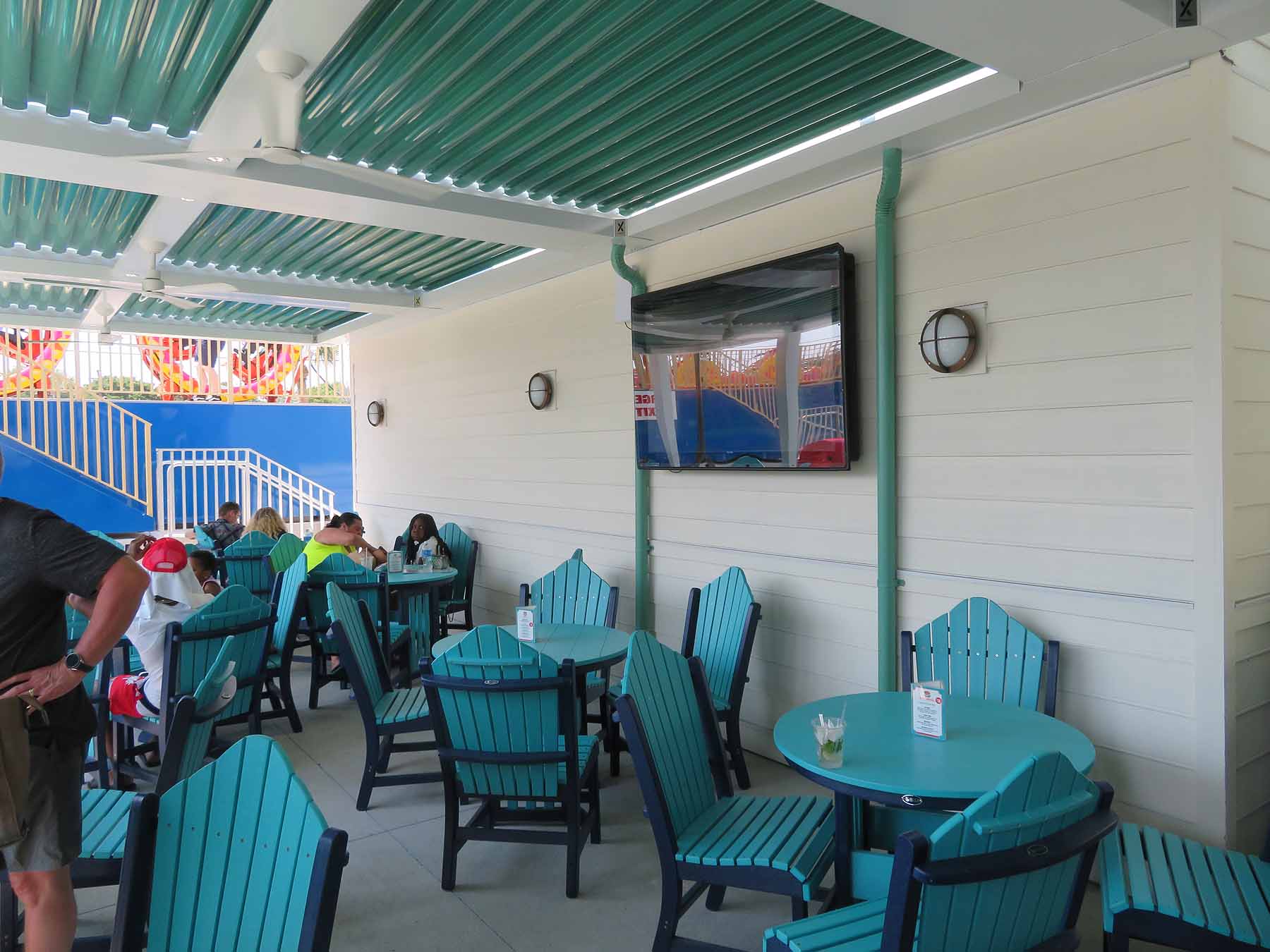 At “Off the Coast” Bar & Grill, guests have their choice of a full-service menu featuring burgers, tacos, and appetizers, including a unique chicken and waffle cone offering. The double-sided bar also features frozen cocktails, souvenir drink buckets, and 15 beers on tap – including domestics and craft brews, which comes out of the tap at 25 degrees — “The coldest beer on the beach,” according to Baumann.

“We wanted to do something different with our menu,” he said. “You have Mexican food right across the street. You have another restaurant down the road with a huge menu. We wanted to look outside the box, still be appealing to theme park guests. Our gourmet grilled cheeses have been super popular. Obviously, we have our chicken fingers, our fish and chips, but we wanted to step things up and elevate and try something different. 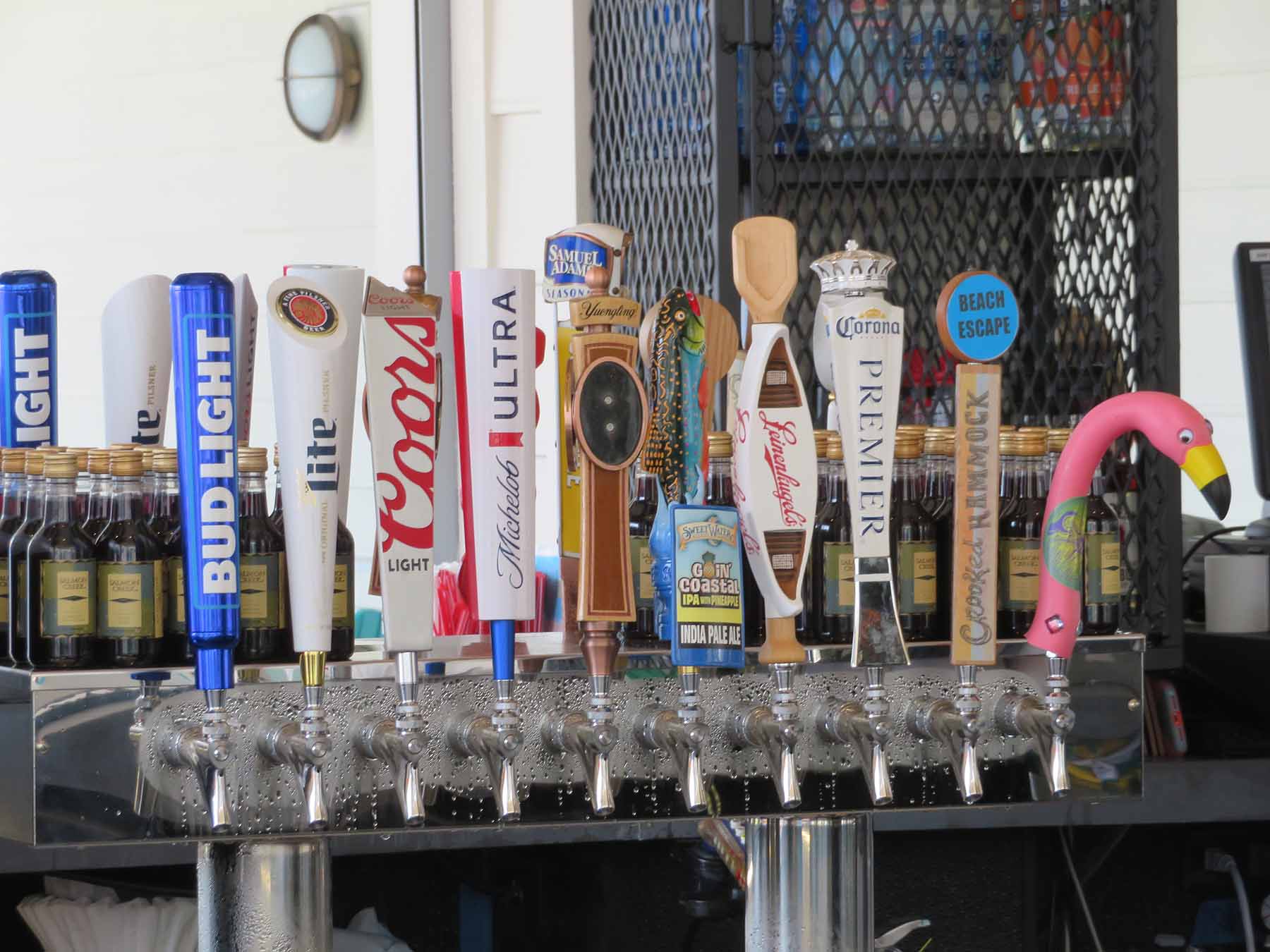 “The beverages have been really exciting for us, Baumann continued. “All of our frozen drinks are doing well. We have a ‘Shark Bite’ which is a drink and then we put grenadine in the shark, spill it over and mix it around. I wanted food and beverage to feel like it was also an immersive experience, the best that we could. We look at those little things. When a guest orders one of our ‘lifeguard drinks,’ the bartender blows a whistle. We want the food and beverage experience to be more than just a another bar and restaurant.” 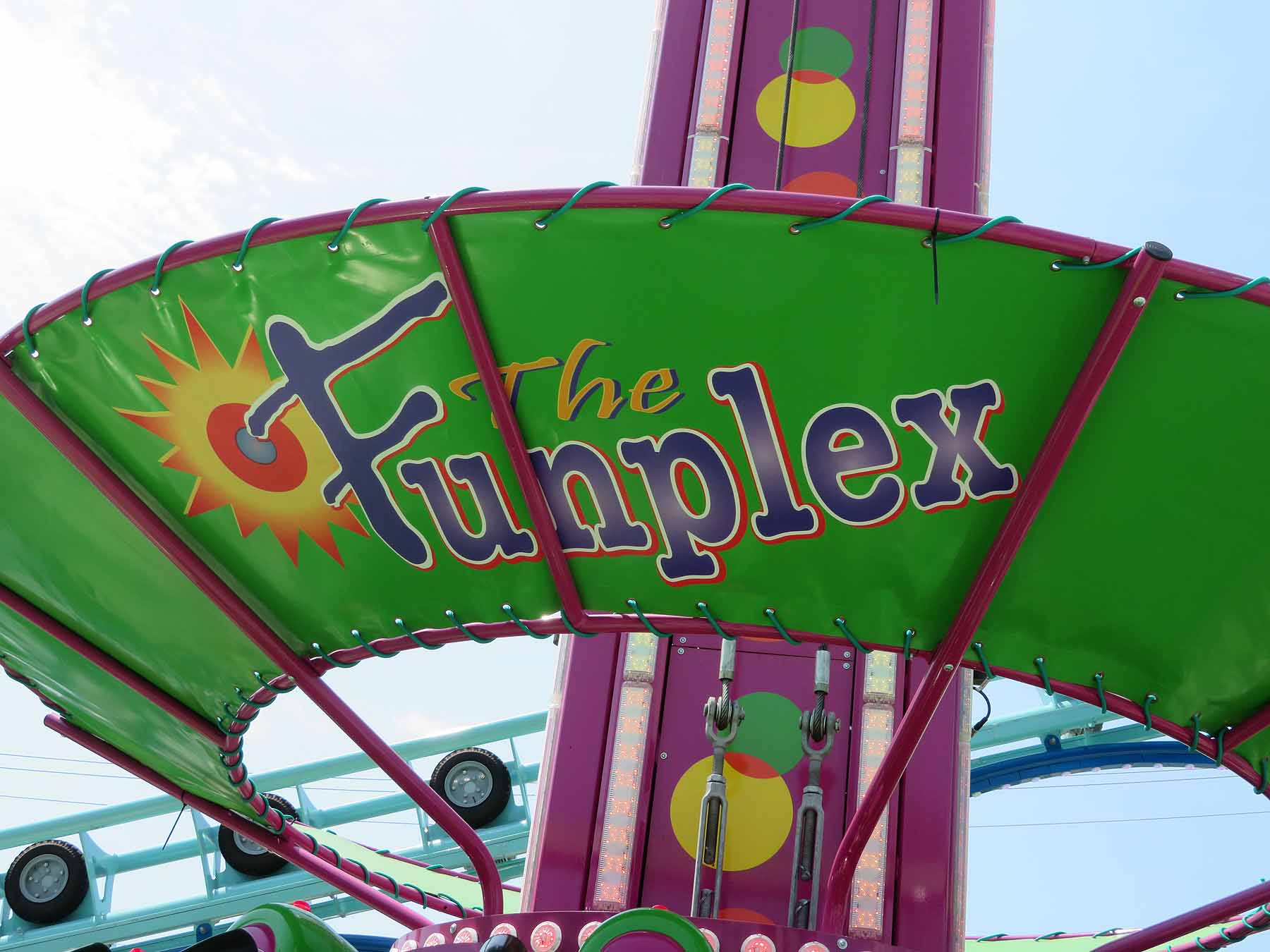 With any new park or tourist attraction, there is certain to be a learning curve, but this is not the first property under the Funplex banner — the company also operates two larger family entertainment centers in New Jersey — and Baumann feels that the overall leadership is a strong asset for the new park.

“The Funplex brand itself is established and they’ve been operating since 1997,” Baumann said. “There’s a wealth of knowledge within the team there. They have a great recipe working and we want to recreate that down here. There are a pair of hundred thousand square foot facilities up there. We just don’t have the room to do that down here right now. We’re just going to continue to grow and develop on what we already have, that foundation we’ve already set.”

The excitement surrounding the park’s opening over the past week has their general manager very excited. 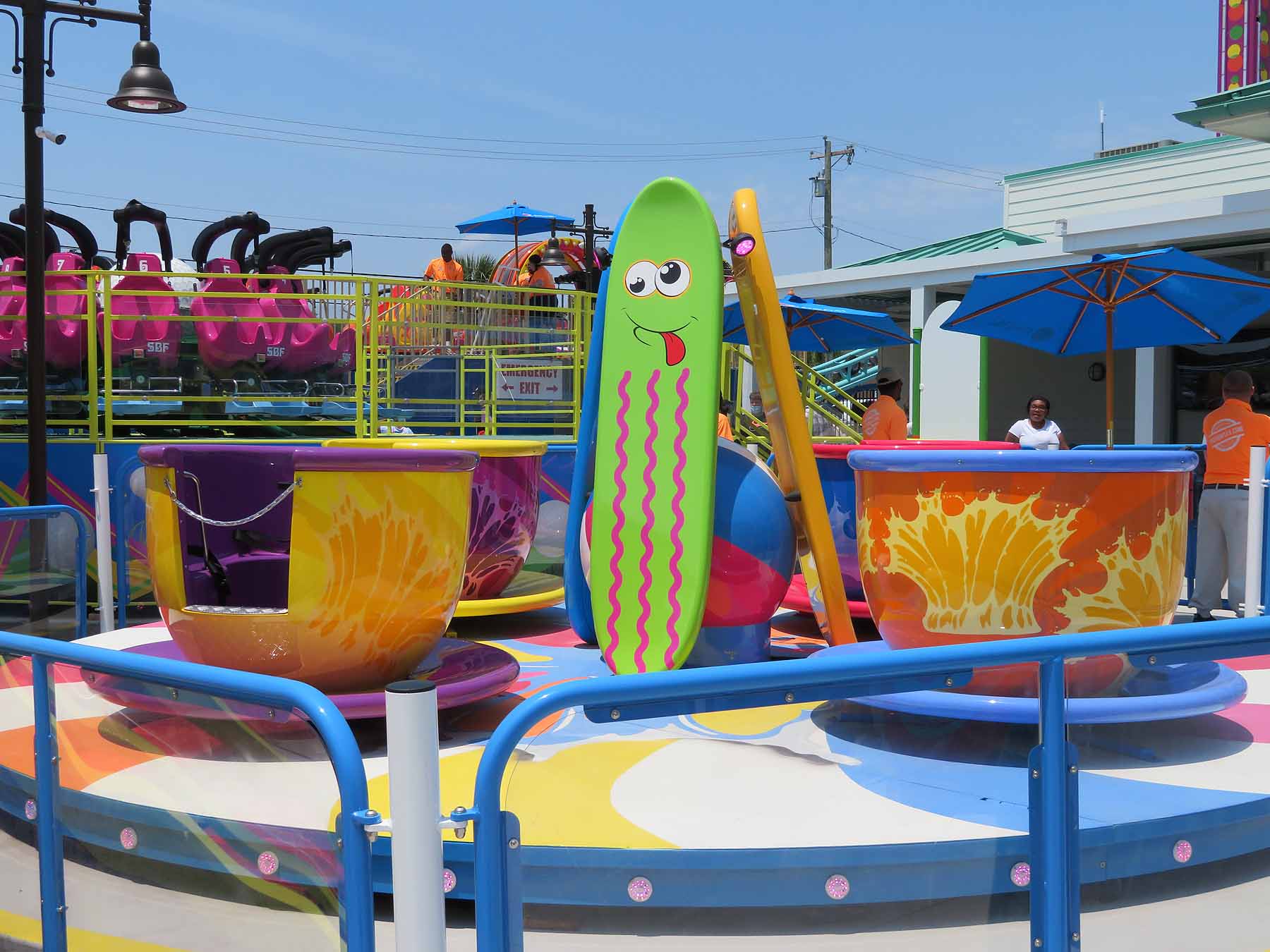 “There is a lot of history with amusement parks here and I didn’t know that. I had never been to Myrtle Beach before I relocated here,” Baumann said. “I’ve been learning a lot about the history and what worked and what didn’t work, what we were going to do, what we were going to try, and it’s great seeing everyone excited because of a lack of amusements, and we’re bringing something back really reenergizing the Grand Strand. Everyone has been very friendly, receptive and asks us ‘how can we help you be successful?’ That’s been my favorite part.”

Our experience at the Funplex was a quick one, just as the park was designed to be. Visiting on a weekday afternoon proved to be light on crowds, which meant all of the attractions had little to no wait. Fun in the Sun and Sky Velocity were both fun rides, and proved to be a great addition to other attractions you might experience in Myrtle Beach. Sitting at the Off the Coast Bar & Grill (even to enjoy a soft drink as opposed to a cocktail or cold beer) proved to be a fun location for people watching and a great spot to relax. 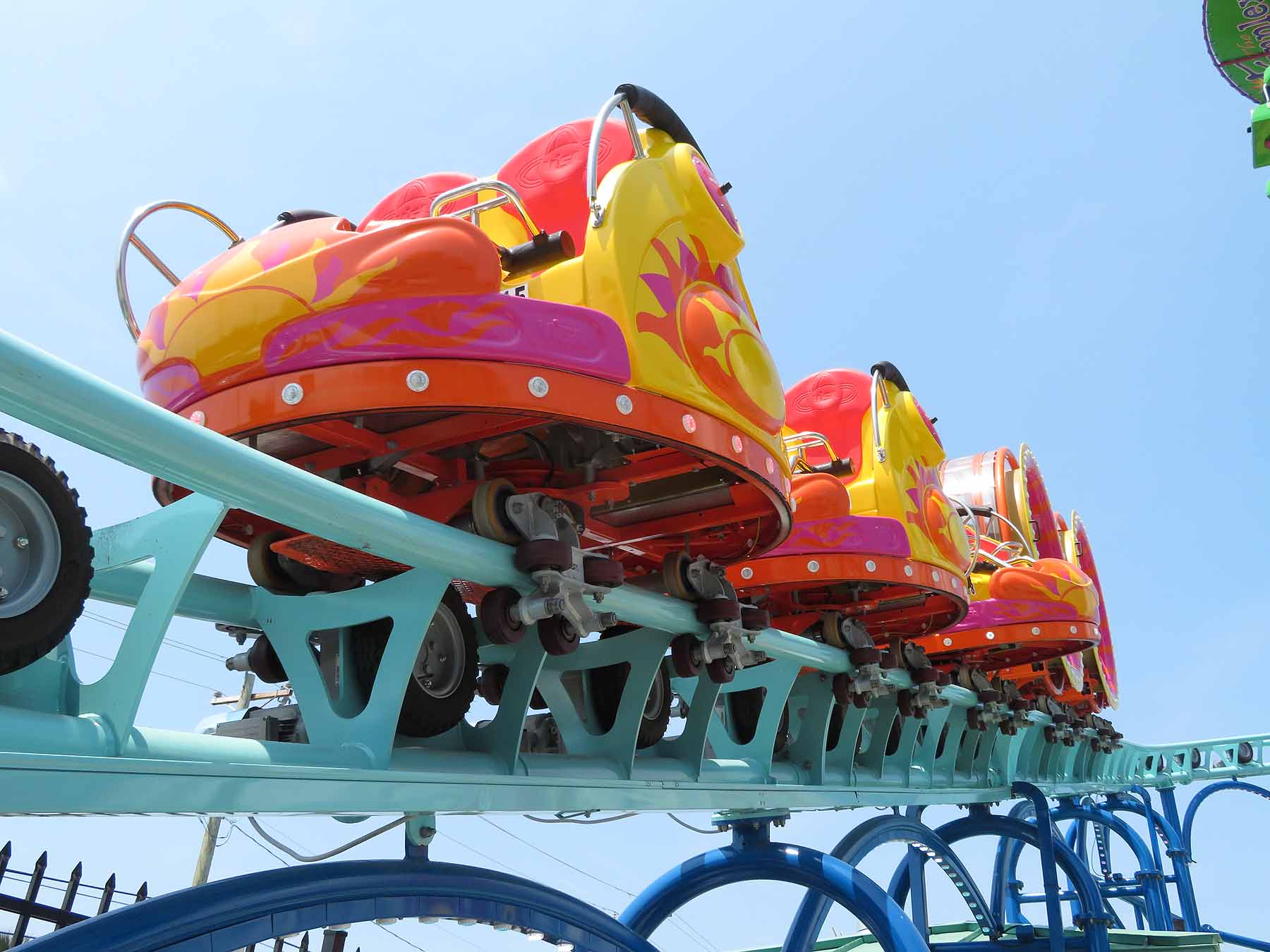 Our one tip to experience the Funplex would be to scope out the parking situation in advance. There are several pay lots in the immediate area — this is a tourist destination after all — but they all have different rates and minimum hours. (The first lot I pulled into had a minimum of 8 hours for $30. I found another lot nearby.) If possible, we would recommend finding a way to walk to the Funplex, especially if you can find cheaper parking within walking distance. Given the park’s proximity to many resort hotels on the Grand Strand, it should make for an easy walk.

Take a walk around the Funplex with us in the video below!

The Funplex is now open daily. For more information about the Funplex, including park hours, and cost of credits. visit thefunplex.com and follow the park on Facebook and Instagram @FunplexParks and Tiktok @TheFunplexParks.