Knott’s Berry Farm officially launched their 100th anniversary celebration, “A Knott’s Family Reunion”, this past weekend. Thursday evening the park held an event to open the summer long event and to show off some of the new things you’ll see at the re-opened park. Here’s what we saw and what you’ll find this summer at Knott’s. 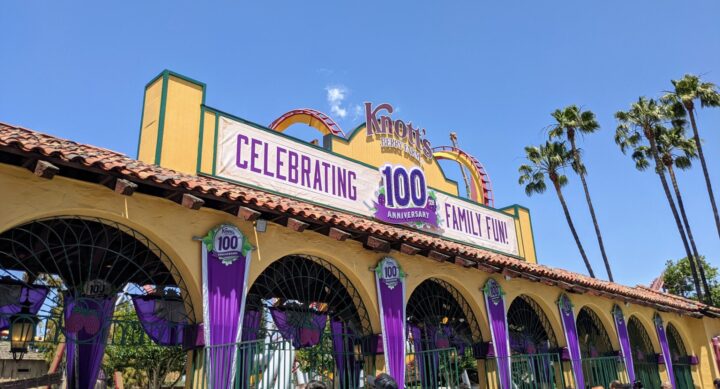 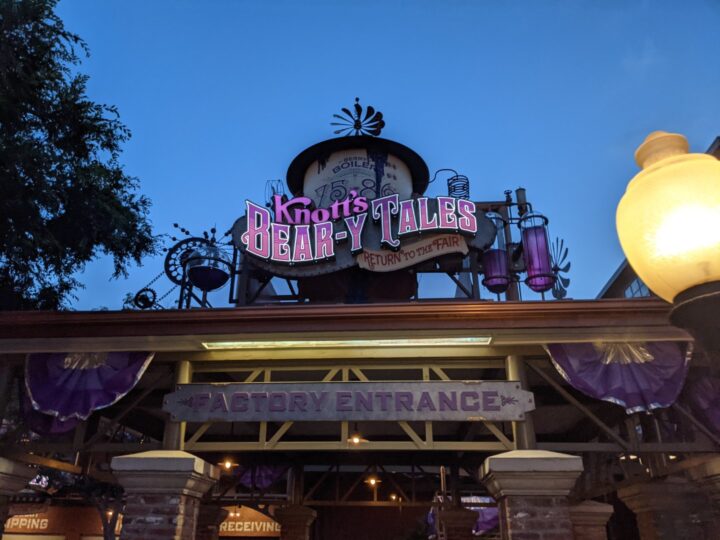 The new dark ride at the park is open! An homage to a beloved classic dark ride at the park from 1975-1986, “Knott’s Bear-y Tales: Return to the Fair” takes over the Voyage to the Iron Reef dark ride. I’ll have a more complete review of it later, but in short the ride is a perfect throwback. It blends 3-D interactive screen games with just enough practical effects, including rushing wind and change in temperature, to capture the feel of an old school attraction while simultaneously feeling modern. Plus, the theming of the building and signage adds a ton of character to its corner of the park. Check out our interview with Triotech from late 2019 all about what went into bringing this beautiful new attraction to the park! 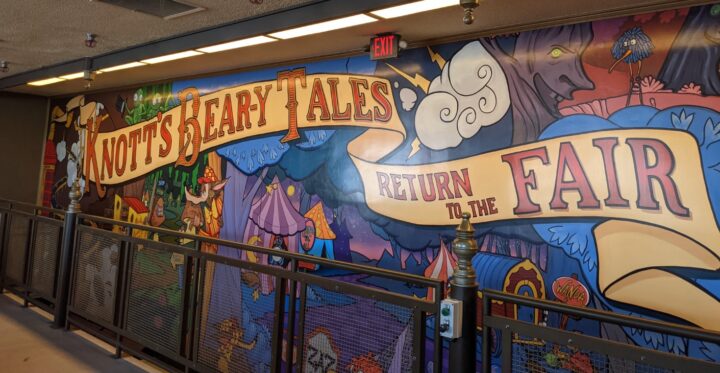 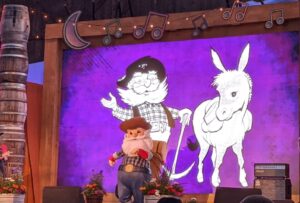 “Knott’s Bear-y Tales: Return to the Fair” brings with it a whole bunch of original characters. Lots of merch featuring Boysen Bear and Girlsen Bear and Crafty Coyote, along with walk around characters.

Knott’s also announced at the event they were bringing back a classic walk around mascot from the park’s past: Whittles the old timey prospector. The park created Whittles (without the name) back in the 1960s as an icon, and then in the 1970s as a walk around character. 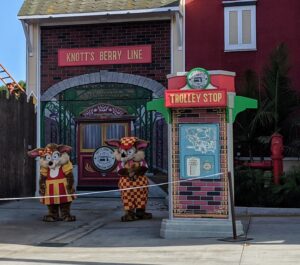 And Moxy and Crafty Coyote!

This OC History post gives a more detailed history on Whittles. I’m not sure how long Whittles lasted at the park, but for the anniversary at least he’s making a return. I kind of love that while the big theme parks seem to lean more into existing IP, Knott’s is loading up on they’re historic original characters.

In another nod to the parks history, you’ll find throughout the park are new photo ops. Each one is a tribute to a past Knott’s attraction, like Kingdom of the Dinosaurs and Wacky Soapbox Racers. They also include a little plaque about the history of each lost attraction. I never got to ride Wacky Soap Box Racers, but I was still delighted to see the little tribute to a ride I’d wish I’d been on. They all looked really good, with lots of detail, and specific sound tracks harkening back to the old rides. For Knott’s fans and theme park history buffs, these are great little spots. 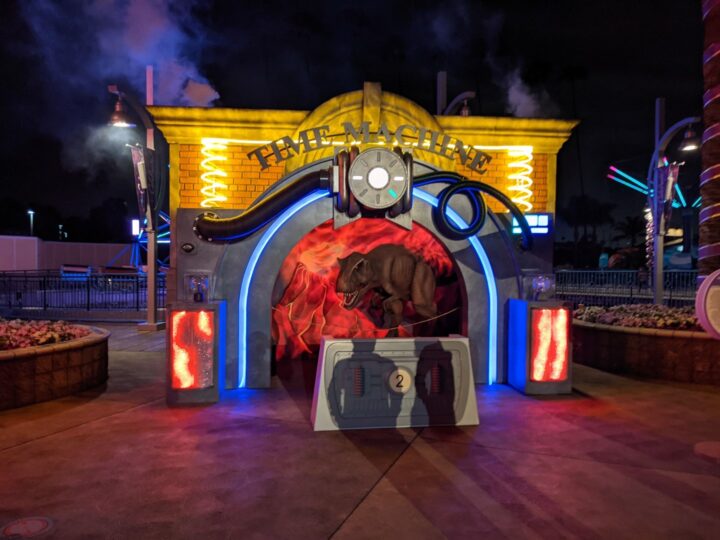 Kingdom of the Dinosaurs photo op! 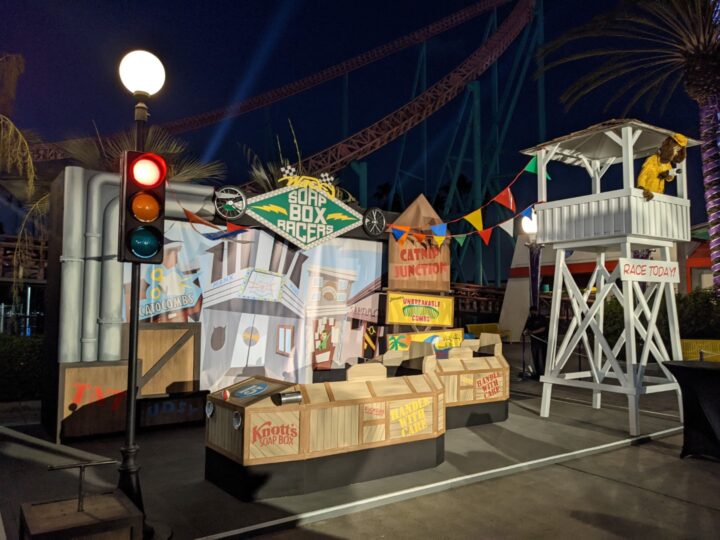 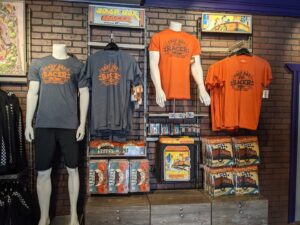 You’ll also find lots of merchandise from old attractions in the parks souvenir stores. Want that Volcano shirt referencing the “active volcano” Walter Knott built in the park in the ’50s? Now’s your chance! There’s also a ton of 100th anniversary merchandise. And back in the Cordy’s Corner gift shop – across from Bear-y Tales – you can find the Harvest of Memories art show. The park got local artists to create artwork for the park, and you can buy both the original pieces as well as (much cheaper) prints. 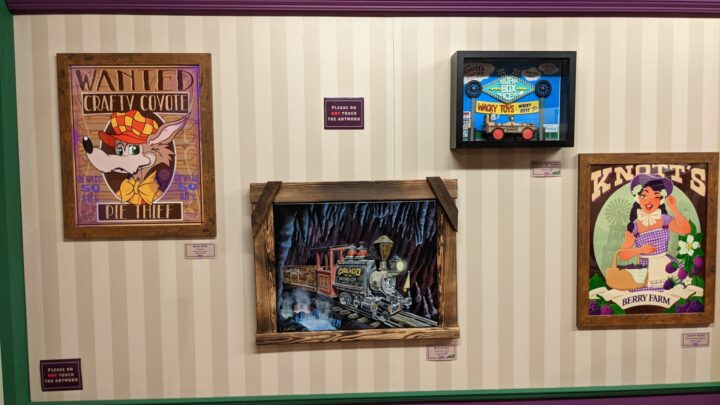 Some of the artwork in the Harvest of Memories exhibit. Originals and prints for sale! 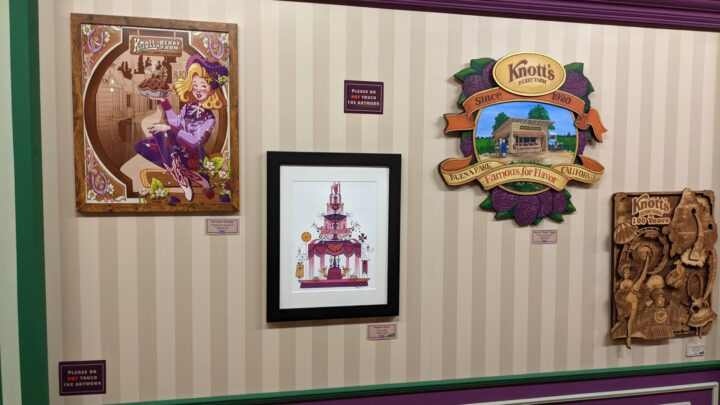 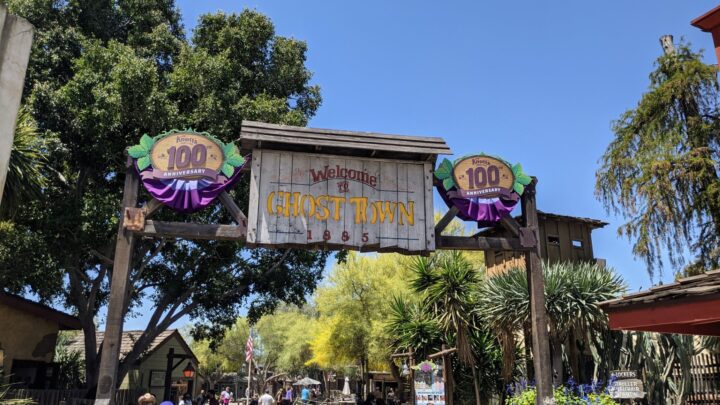 Overall, the park was looking great. Probably thanks partly to the extended downtime, Knott’s is completely decked out for the anniversary. Bunting and decorations cover every building in Ghost Town and the Boardwalk. Plus, the new “K” Tower shines high above it all at night. In general the lighting throughout the park just seemed sharper to me. But, maybe that was a result of not being there for over a year. Still, the park looked wonderful, and it was kind of a joy just to wander through it. 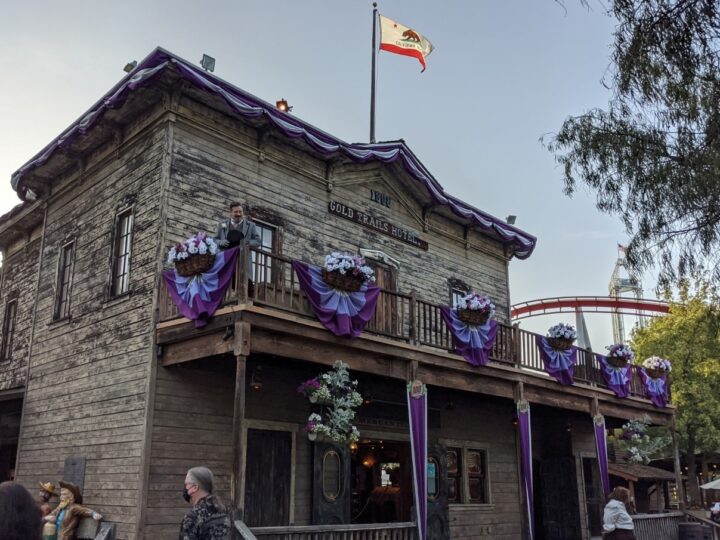 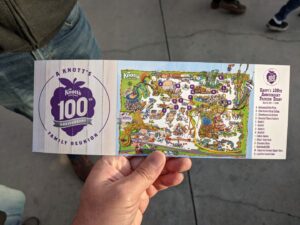 Knott’s Summer Nights joins the Knott’s Family Reunion as evening entertainment and food from May 21 through September 6. Live entertainment every night from the Calico Mine Stage back into the Boardwalk section of the park. And it wouldn’t be a Knott’s Berry Farm event without some special food items. Summer nights will include food and drink booths around the Calico Mine Stage and a tasting card for bites at them. As always, the boysenberry beer and cider were great.

Basically, Knott’s is looking as good as it has in recent memory, and it was great being back in the park. I love how much they’ve filled the park with nods to the parks history, and how alive and energetic the park is looking. I didn’t even mention the coasters above, but everything seemed to be running great. The only downside is the park isn’t permitted to load every row, so some coaster waits are a little long. But, hopefully after June 15 those restrictions start to lift and the park will be operating full blast. 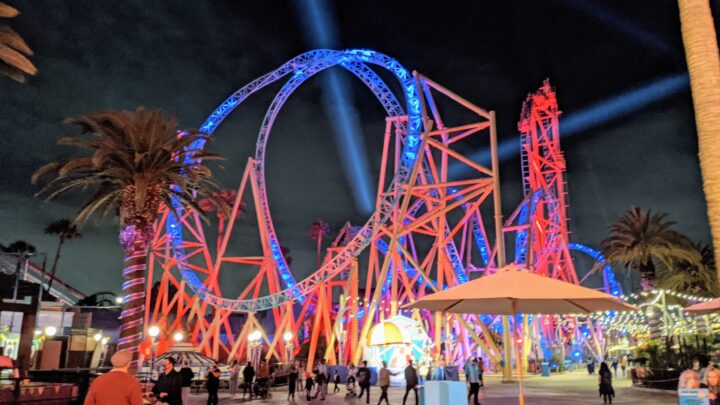 For now, you do need to make reservations, and I recommend trying to make it as far ahead of time as possible so you can snag one of the first reservations of the day. The morning was much lighter than the afternoon, so if you can get in first thing you should be able to get on the longest wait rides (GhostRider) early. For tickets and reservations head to the Knott’s Berry Farm website, and you can also find more details on all of A Knott’s Family Reunion attractions.

We can’t wait to make it back down to the park this summer. If you’ve been to Knott’s so far for the Family Reunion, let us know what you think in the comments below! 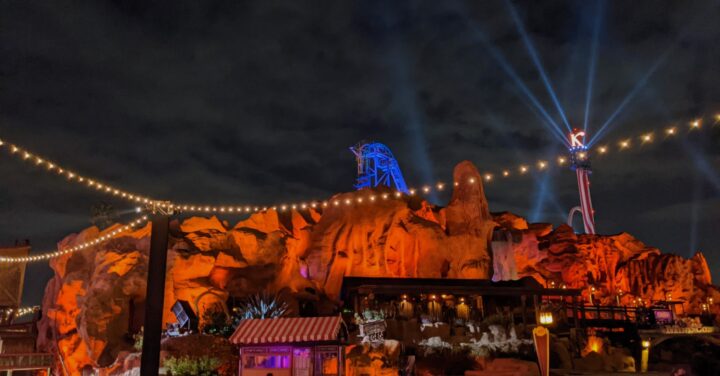