UPDATE: The park announced South Bay Shores will open on June 5! Check out photos from our construction tour below.

This past weekend California’s Great America welcomed the Norhtern California American Coaster Enthusiasts for an offseason tour. Normally this happens around the February/March time frame, but in the land of Covid we get an early May tour, in anticipation of the park opening May 22.

The majority of the tour was going through a nearly finished South Bay Shores, the new expanded water park at California’s Great America. We did a tour back in the Fall, and comparing the two you can see how much further along things are. 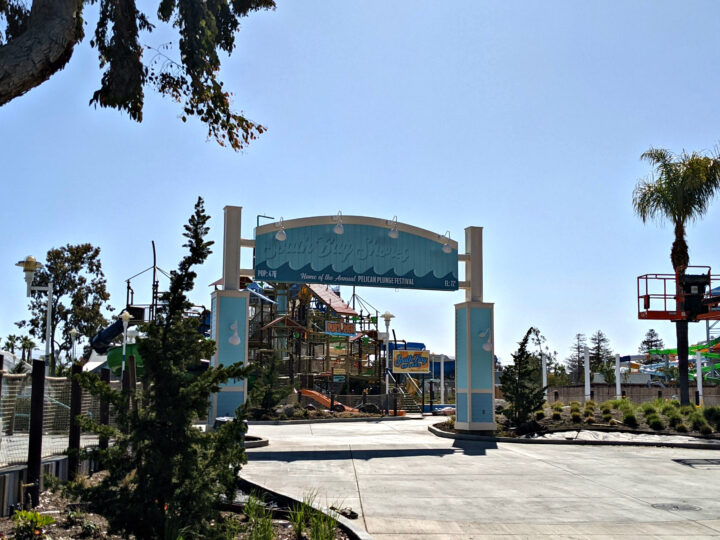 The new entrance sign is almost finished, all that’s left is to add the 3-D lettering to the top. The entrance plaza is a big improvement to the old water park which never really had an entrance. Beyond that, the old kids water play-structure has been re-themed, and most of the Australian theming is gone. You can see the pillars where awnings will be installed to offer some new shade. This area is also in front of the main gates for the water park, so might be accessible at times the main water water park is closed. 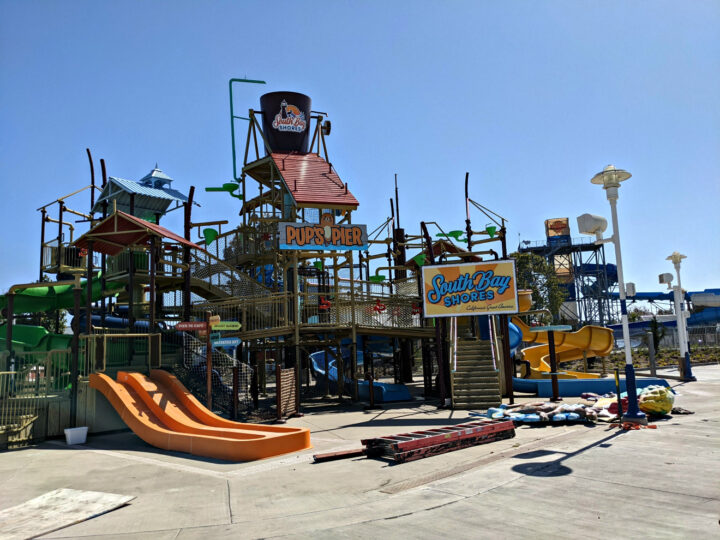 Also in front of the main gates is the new Pier 76 Cafe. So even when the Water Park is closed in the evenings or shoulder season, the restaurant will be open. 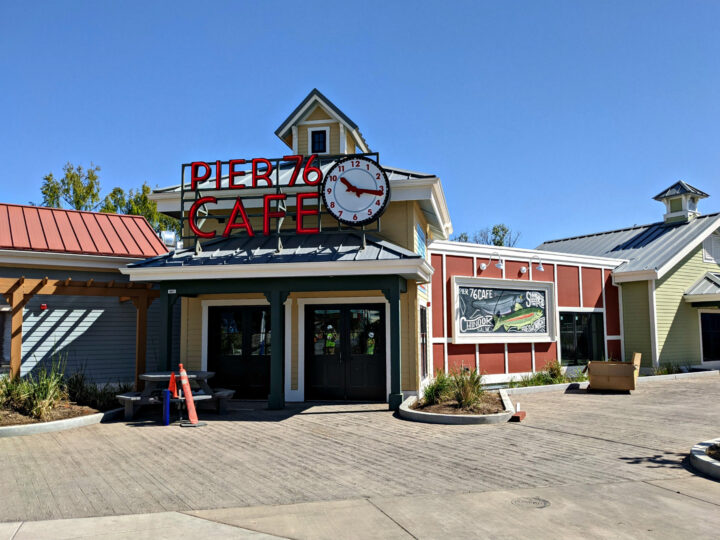 You might notice the artwork on the side of the building. One of the best things about South Bay Shores might be the number of fun signs and paintings throughout, covering almost every wall. These were all done by Lacey Bryant, the parks resident artist (she’s done a ton of murals and paintings for California’s Great America over the years). 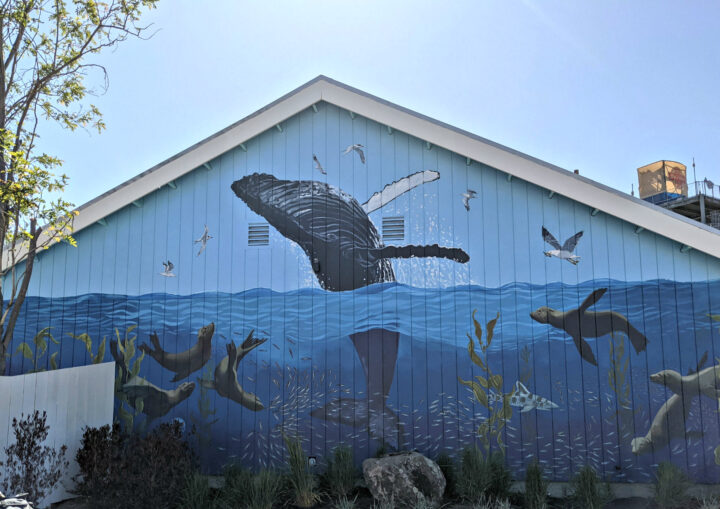 Paintings and murals cover lots of the walls in South Bay Shores, and it adds a lot of life to the new waterpark.

The first big new attraction in water park is the new Tide Pool Lagoon kiddie pool with 8 small slides, ranging from very tame to not as tame. The green slide on the far end might be the coolest, as it uses translucent bands of different colored plastic to add essentially lighting effects to the inside of the slide, which looks awesome. I honestly wish they had used this effect on the new adult slides. 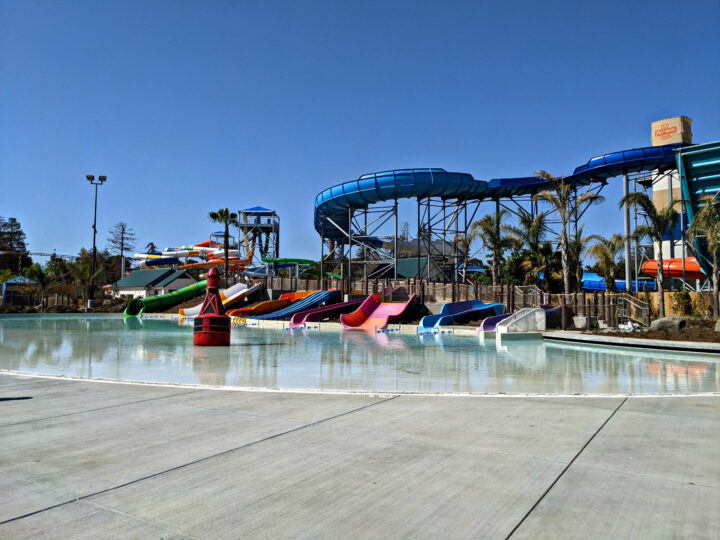 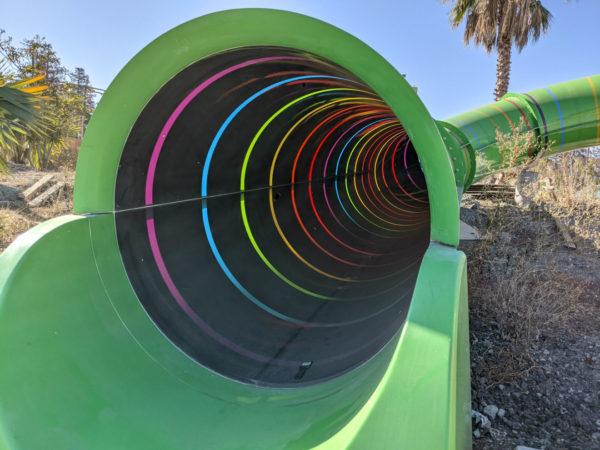 At the back end of the water park, the new wave pool is getting close to done. Lots of new cabanas, including several large “VIP” cabanas. But, really, the most exciting part back here is that there’s now a bar in the water park! 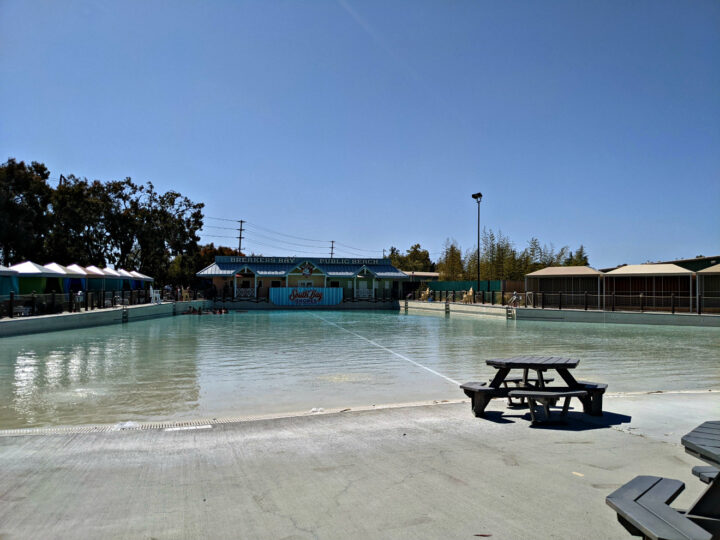 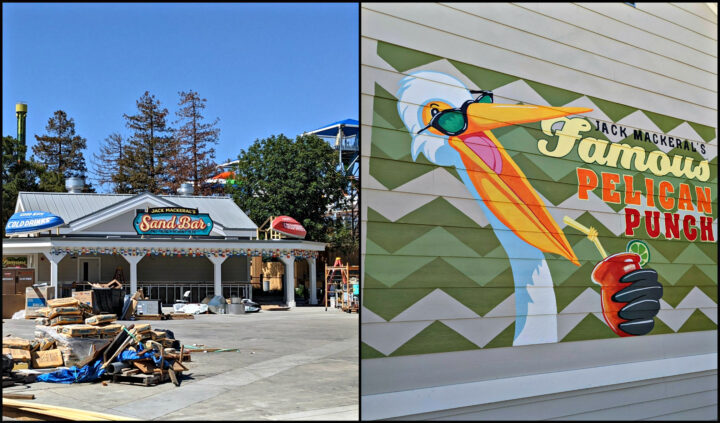 Don’t like water slides? Go have a beer while your friends wait in line.

One of the great improvements in South Bay Shores is that the water park now has a complete loop instead of a dead end at the wave pool. So if you continue past the Sand Bar you end up at the signature new attraction: The Pacific Surge slide complex. 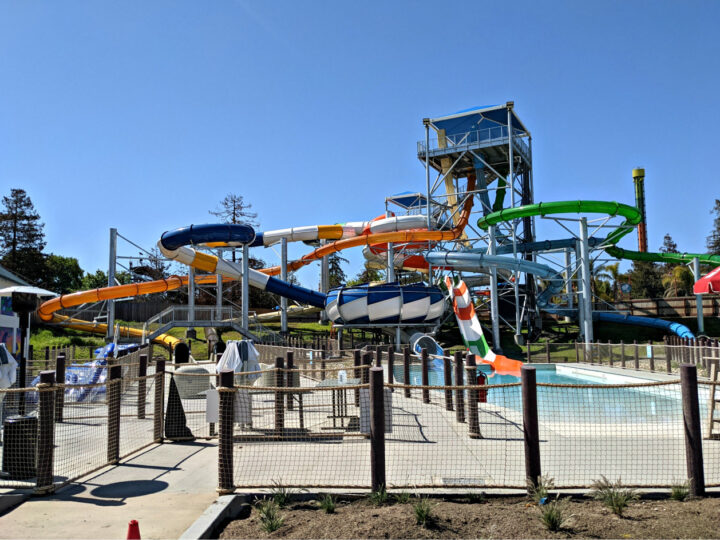 The complex includes six new slides total. Two are raft slides that leave from a lower platform, Feeding Frenzy and Barracuda. The slides intertwine and feature pretty different layout. One ends with a funnel/”toilet bowl” feature while the other has a “double-down” like drop that should give a little pop of air time to sliders. These two slides are about five stories tall. Ascending further up gets you to the four state of the art vertical drop slides, sure to satisfy thrill seekers. Maybe the best part of the complex since the previous tour we took is how much shade there is on the platforms now. Great America has gone to great lengths to add more shade in general to South Bay Shores. Basically, no one will ever complain about their being too much shade in a park. 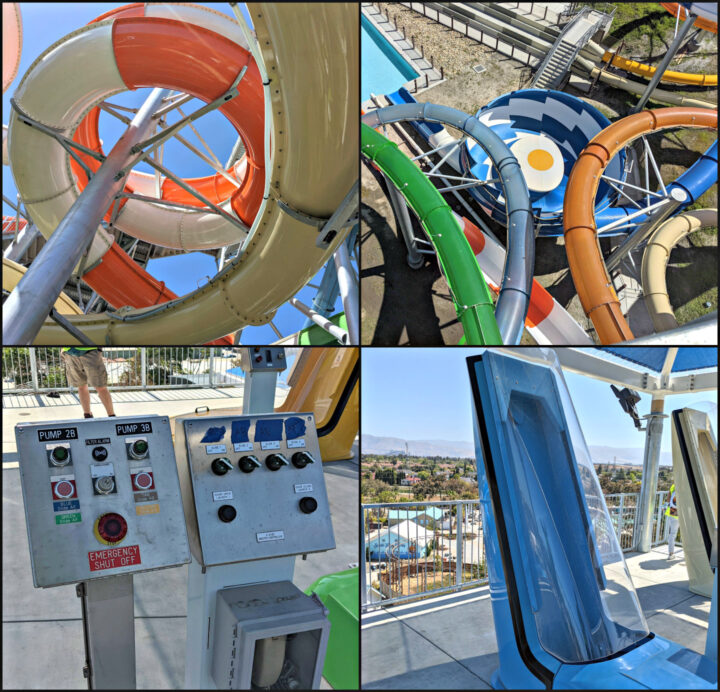 Lastly, as you get back towards the entrance there’s a large space (currently empty) that will become a green grassy area with small hills, basically designed for people to be able to lounge out on the grass like you would in a park in a seaside town. You can see the area to the right of the fence in the photo below. Hmm, the area left of the fence looks like it’s just a big empty plot of land for now… 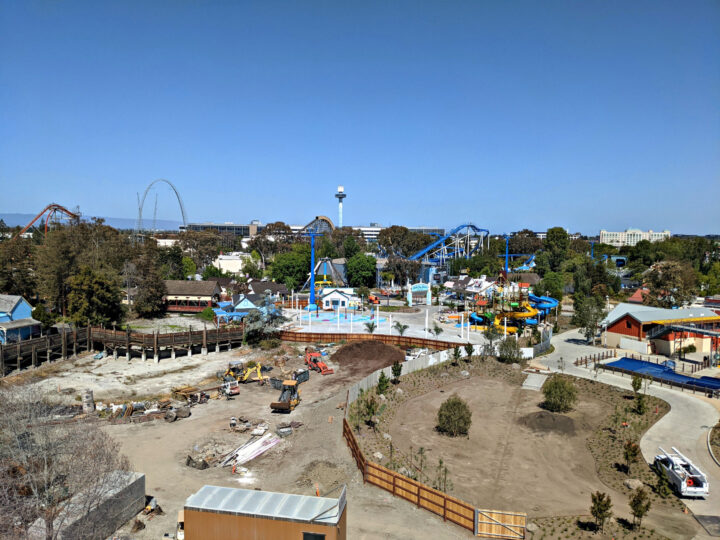 And that takes you back to the entrance of the water park. There are lots of great little touches that have really made South Bay Shores more welcoming than its predecessor, and it’s really embraced the Northern California theme. Danny Messinger, Great America’s communication manager, told us that their design team tried to limits the number of straight lines on the pathways to give it a more organic feel. The landscaping includes mostly native Northern California plants, and includes lots of little hills and changes in elevation to give it a more natural feeling. 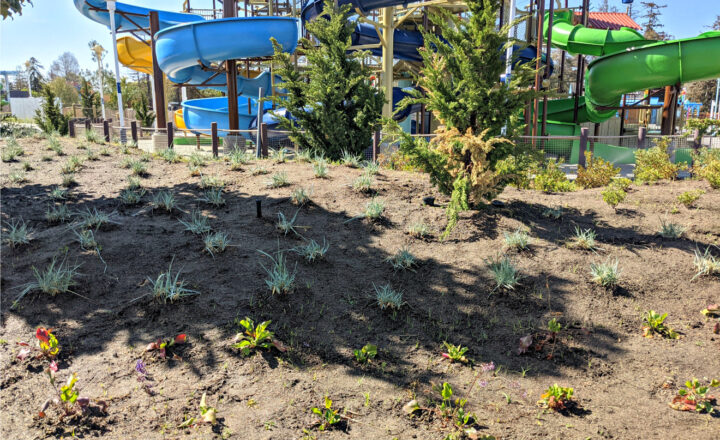 They’ve even mixed in different colored stones on the paths, adding tan stones here and there to give the impression of sandy pathways like you’d see on a beach front. All these little touches should really help liven up South Bay Shores, especially as the plants grow and fill in. 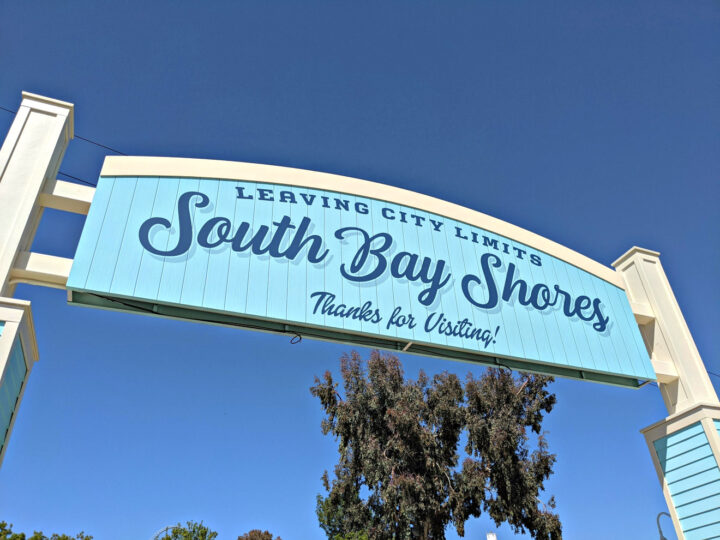 That was it from our quick tour of South Bay Shores. We did get a look at a few rides that are being refurbished and getting new paint jobs. Stay tuned for another post in the next couple weeks that will highlight some of the changes and improvements you’ll see when the park opens May 22. South Bay Shores itself won’t open on the 22nd, but the state just released guidance for water parks to re-open, and we should be hearing an announcement on the South Bay Shores opening pretty soon (Update: South Bay Shores is opening June 5!). In the meantime, make sure to check out our running list of all other theme park openings throughout the country!