5 Reasons Why (I Think) Thunderhead is Better than Lightning Rod

Yes, you read that headline correct, I think Thunderhead is a better ride than Lightning Rod. Let me tell you why.

Last year when I visited Dollywood, it was the first time I had been there since Lightning Rod opened. The hype was there — five years worth. Needless to say I was pumped to finally ride this coaster. So we hopped on and two laps later I was very happy…but not blown away. The ride, while fast and full of airtime, seemed awkwardly short, rough, and just didn’t seem to measure up to what I thought it would be. 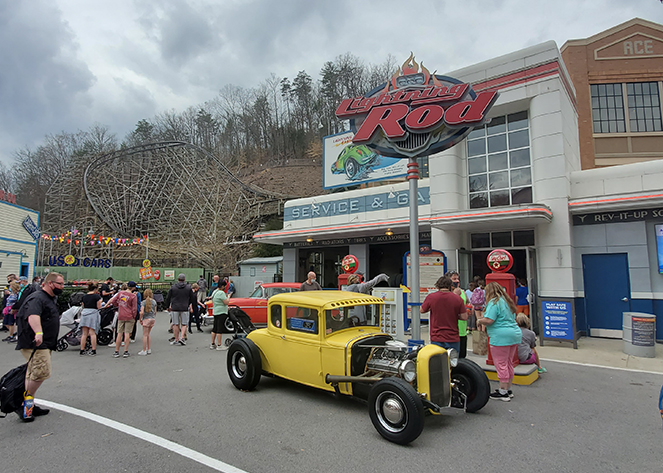 Fast forward exactly one year, I am back at Dollywood and excited to give Lightning Rod another shot. Perhaps I had caught it on a bad day the year before or maybe the extensive retracking from Rocky Mountain Construction over the off-season had drastically helped the ride. So I board again hoping for a better experience.

Do not get me wrong, Lightning Rod is a very solid ride, but it still did not hit that mark for me. The retracking definitely made the ride quicker, but did not eliminate all of the rough spots. 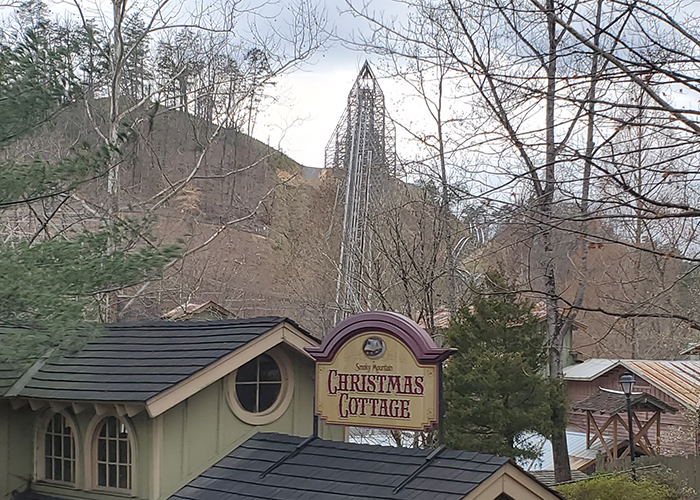 Now let’s switch gears real quick and talk about Thunderhead. I have always been a big fan of the now 17 year-old GCI. Along with Lightning Rod, it also received new track over this off-season (and past few off-seasons as well), so I couldn’t wait to see it in action!

So without further adieu, here my five reasons why Thunderhead is better than Lightning Rod:

Before Dollywood began the process of fixing Thunderhead’s track, it was a little rough in a few spots, but it didn’t take away from the ride experience — it was the good type of rough you expected from a wooden coaster. Unlike Lightning Rod’s retracking, Thunderhead’s did wonders for the layout; the ride is practically brand new. The trains absolutely fly through the twisted mess of track now, without even a glimmer of backache. I have had rougher rides on B&M hypers than I had on Thunderhead. 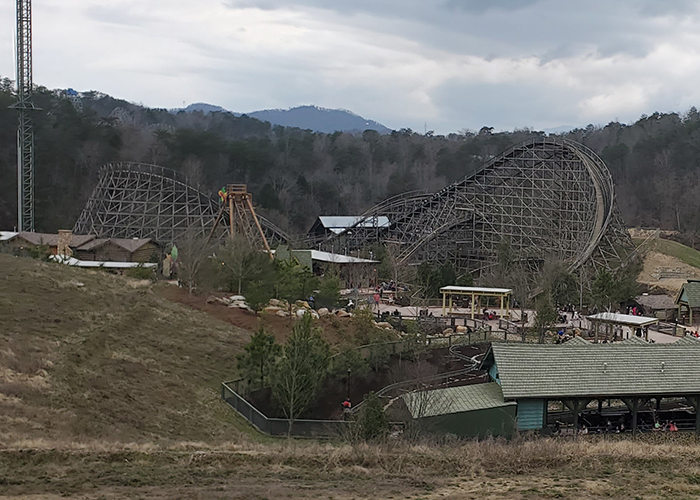 When I compare ride quality, one big factor I look at is actual ride time. I’m talking from station to break run. If we take a look at these two rides, one significantly beats out the other. Thunderhead clocks in at around 1:50 while Lightning Rod is only 1:10. That’s nearly a 40% longer ride experience! And when you factor in the wait time to ride time ratio (which we’ll talk about next), it’s a no-brainer. Sure, you can argue that Thunderhead is only longer because it has a traditional lift hill, but I love a good slow ride to the top…it builds the anticipation! More on Lightning Rod’s lift later. 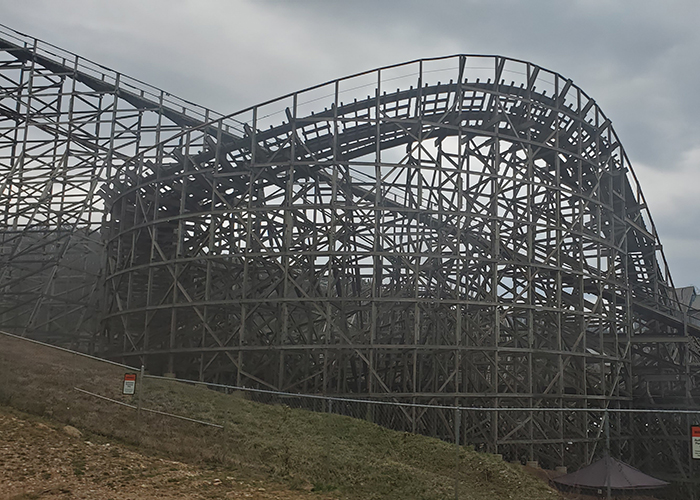 In each of my last four visits to Dollywood, Thunderhead has averaged a 5-10 minute wait. Even this year when the park was at capacity during COVID (parking lot still 80% full), the coaster was a walk on. One time I had about an hour and a half to hit up the park and I only went knowing I could get a good marathon in on Thunderhead and got 10 rides in.

On the other hand, Lightning Rod is usually a good one or two hour wait. There is no re-riding here, unless you want to spend half of your day in one queue. Hopefully the recent work done on the ride will help with reliability and a higher capacity in years to come.

On a traditional lift, the excitement builds as you go up and crest the top and carries out through the rest of the ride. On Lightning Rod there is a launched lift, which looks incredible and is a blast, until you get to the last 50 feet or so. I never had a chance to ride the coaster before the launch was throttled down, but talk is that it was sheer coaster perfection. Now that there is a significant slow down at the top, all momentum is lost. I wouldn’t even mind if the launch was slowed down from the start if it meant being consistent through the top. 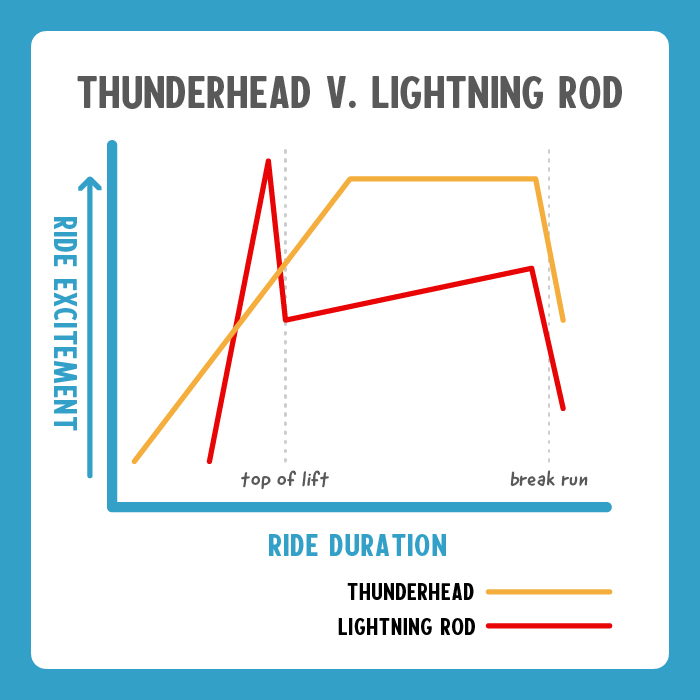 Finally, I think Thunderhead simply has a more interesting layout. On this coaster you are never just going straight; there is always a turn, a hop, or a drop. It’s like it is keeping you on your toes from start to finish. There are an astonishing 22 turns and 32 crossovers on this coaster! While Thunderhead has a quite a number of small elements, Lightning Rod has only a few large elements — most notably the incredible quadruple-down at the end of the layout. 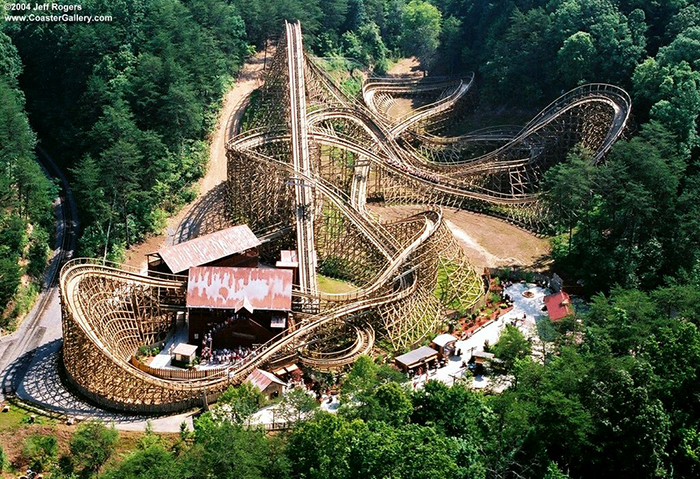 It all boils down to preference as to which coaster experience you prefer, but being the only two (mostly) wooden coasters at Dollywood, I thought it was worth taking the time to share my opinion and maybe help give Thunderhead the time in the spotlight that it deserves!

What are your thoughts on these two world-class rides? Do you agree or not at all? Let us know!