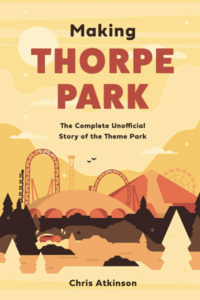 Making Thorpe Park: The Complete Unofficial Story of the Theme Park dives into the history of one of the UK’s largest and most popular theme parks. Written by lifelong Thorpe Park fan Chris Atkinson, the book explores the humble beginnings of the park, details its history and covers all of the park’s rides and attractions — past, present and future.

The book is divided into five parts, each covering a time period of the park’s 40 years of operation as well as the pre-opening design phase.

Prior to reading this book, my knowledge and familiarity with Thorpe Park began and ended at the park’s respectable coaster roster. I knew little about its history, other attractions and overall design. But after finishing the book, I believe I could do fairly well at a Thorpe Park trivia night. This is an incredibly detailed and informative book. He weaves into the pages quotes from a slew of major players in Thorpe Park’s history.

Chris did his homework while writing the book. Even those who are frequent, lifelong Thorpe Park visitors will likely learn some new Thorpe Park facts while reading the book. And although he knows more about Thorpe Park than most, his down-to-earth writing style won’t deter Thorpe Park newbies like myself.

I had the chance to chat with Chris about his experience writing the book as well as his time spent at the park:

C101: Speaking from personal experience, writing a book like this is a huge undertaking (especially when you have a full-time job). What inspired you to write a book about Thorpe Park?

Chris: Well firstly I was stuck indoors during the pandemic, which meant I had time to fill! I’ve always been keen to write about theme parks, and for ages considered setting up a website or a blog, etc. I had to be honest with myself, and admit that I’m the kind of guy who will work immensely hard on a project, but then struggle to keep going once it has launched. So many people underestimate how much continued dedication and hard work it takes to continually provide quality content. I admire people who run the best sites (such as this one) immensely. You so often see new sites, blogs or podcasts launch with great fanfare, and then sit stagnant. The hard bit is not launching the thing, it’s building your reputation by being consistently good. I decided to leave that to the experts and felt a book was a great solution, allowing me to work on something I was proud of, and then move on to the next project.

Two things were my main influence on choosing a Thorpe Park book though. Firstly the excellent Tales from the Towers released in 2013 by Nick Sim, a book on the history of Alton Towers in Staffordshire, which I enjoyed immensely. Sim went on to write another book about Universal Orlando before he sadly passed away. Since then I’ve read plenty of theme park books, but very few focus on the UK. I was hoping somebody would release a book on Thorpe Park for a while, but when it never happened I thought maybe I should give it a go myself. It was far more work than I imagined, but a hugely enjoyable process.

Secondly, I sat with my girlfriend (now fiancé) early last year and watched the Imagineering programme on Disney Plus. She’s not really into theme parks, but it managed to capture her interest, and it showed me that by using the right techniques to tell the stories you can reach not just your core audience, but those with a passing interest too.

How long did it take you to write the book?

About six months from start to finish. It would have taken me a lot longer—or just never finished—if I hadn’t given myself a self-imposed deadline. I wanted it to be ready ahead of the busy Fright Nights period. Knowing I wouldn’t sacrifice the quality of something in my name, it meant I had to work long days and very late nights. I also had a lot of help and support too, with many of the people I interviewed for the book giving me a real boost. Every time I discovered something that obviously wasn’t public knowledge I was very excited to help share this story, which was surprisingly untold.

What is your fondest memory of visiting the park?

I remember visiting the park with my dad when I was 6 years old in 1992. He used to work every Saturday, and I had two sisters, so us getting to spend some time as just the two of us was rare. It was a special day, and cemented Thorpe Park in my memory as somewhere magical. There were few ‘big’ rides there at the time, but I remember the log flume (Loggers Leap) seemingly impossibly high and scary. I think I was the perfect age to enjoy everything the park had to offer at the time, it being predominantly a family park.

When I was writing the book my dad surprised me by pulling out the videotape he had filmed that day from his loft. It was really valuable in my research, but also quite emotional seeing myself as a small boy exploring the park and discovering these attractions that I would grow to love for the first time.

What’s your favorite ride at the park? 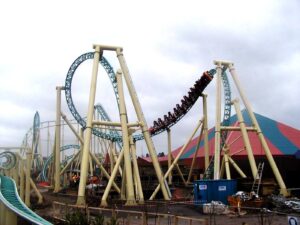 Probably not my favourite to ride anymore as it’s pretty rough, but I’d say Colossus. It was the first proper coaster installed, and was quite the statement, being this enormous, sprawling Intamin with ten inversions. It’s special to me as I remember watching it develop as a project from the initial rumours and announcement, through to queueing up to ride it on opening day. As a ride when it opened it was smooth enough, and a fantastic experience, with a decent ride time and packing a punch until the very end.

Whilst the theming is a bit generic, the landscaping around the attraction is really well thought out. Whether you’re in the queue or just waiting for a friend, you get to walk around all the elements, standing in the middle of a corkscrew as a train barrels over you, etc. Plenty of coasters have been added since, but nothing will ever match the sheer excitement of my first ride on Colossus in 2002. When I came to writing the book it was the first thing I wrote about in order to get the words going.

What do you think is the most underrated attraction at the park? 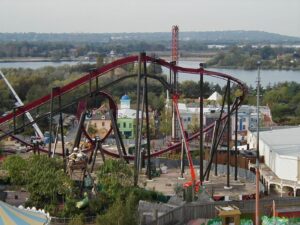 Probably Nemesis Inferno (B&M Inverted), simply because it gets a lot of stick for not being Alton Towers’ Nemesis, which was opened nine years earlier. It’s a really decent coaster with a custom layout, and whilst it contains a lot of common elements from similar models, it has a really cool original start, dropping straight out of the station into a tunnel. Like most B&M’s it’s super reliable and silky smooth.

I spoke to the designer John Wardley for the book, and he was pretty devastated by them choosing to reuse the Nemesis name. Coming from a marketing background, I can understand the temptation of using the brand recognition from such a prestigious coaster to tempt in the general public, but in the theme park community the decision rightly comes in for a lot of stick.

If you could add any roller coaster or attraction to Thorpe Park, what would it be?

In the UK we’ve had a real shortage of wooden rollercoasters for many years, but Alton Towers finally changed that with Wickerman in 2018. Hopefully that would be the first of many, and an RMC beast would be a very welcome addition to Thorpe Park. If not then a multi-launch from Mack or Vekoma would probably complement the current line-up pretty nicely. It has been 9 years since the last major rollercoaster was installed, so to be honest, anything would be nice at this point, although I’m confident that something would have already been announced had it not been for the pandemic. That’s understandably slowed down the next major project.

With the weather so unpredictable here, it’s surprising that we have so few decent indoor attractions. Thorpe Park took a massive gamble on the ambitious but flawed Derren Brown’s Ghost Train in 2016, which was a step in this direction, but has likely burnt them for a while. Flying Theatres have taken a long time to appear here, but I believe one is being added to the nearby Legoland Windsor, so that is a possibility for the future too. Appreciate they are not everyone’s cup of tea, but for me, I think they do a good job of giving families a high-quality experience that you would expect from a premium theme park.

Not to spill your secrets, but what’s your favorite place in the park to kick back and relax? 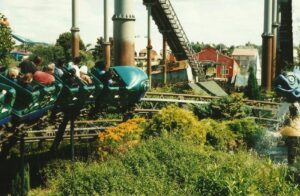 Thorpe Park is actually contained in a really small space. I reckon it takes no longer than 10 minutes to get anywhere, so finding somewhere quiet is near impossible. Previously you could catch a ferry or the Canada Creek Railway over the Thorpe Farm, which was very laid back, but sadly now gone.

Now I’d say the best place is the Sunken Gardens, a lovely landscaped area that is very well hidden behind Amity/Stealth. Relaxing is probably quite hard being just metres from an Intamin Rocket coaster, but it’s always pretty empty and a good place to sit and recharge your batteries before the next adrenaline rush.

Where the best place to eat inside the park? 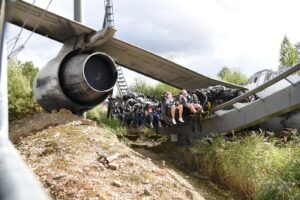 If you love your food, I wouldn’t be confident recommending anywhere, as Thorpe Park is unfortunately pretty average when it comes to options. There are plenty of franchised and in-house fast food type restaurants, but nothing you would go out of your way for. That might be a reflection of their core audience.

That said they do now run an annual Oktoberfest event in September that has some excellent temporary food stalls, where you can get German delicacies, so if you are lucky enough to be visiting then, try it out. If not head to nearby Staines after your visit to find lots of decent sit-down meal options.

Do you have any advice for others who are considering writing a similar book about a theme park?

I can’t pretend I’m an expert, but I can share things that worked for me. Find something that you feel passionate about, and try and tell a story that has not been told before, or at least from a brand new angle. Like I mentioned earlier, find the right outlet for your creativity, and go for it. Imagine nobody is going to read/see it, and if the process and work involved still appeals to you, then you’ve got a fighting chance. If nobody ever read making Thorpe Park, I’d still be delighted I got to speak to some of my idols and spend time developing my writing skills. When I get nice messages about the book it’s lovely, but just a bonus.

We’d like to thank Chris for taking time to chat with us.

Making Thorpe Park: The Complete Unofficial Story of the Theme Park is now available on Amazon and other retailers:

For a chance to win a copy of Making Thorpe Park: The Complete Unofficial Story of the Theme Park, leave a comment below letting us know your favorite Thorpe Park attraction — even if you haven’t ridden it.

Good luck to everyone who enters!