When I purchased my first CDX Blocks LEGO compatible roller coaster I was blown away: the Cyclone kit instantly become my favorite roller coaster model. The wooden coaster inspired design is very sleek, it’s challenging but not too difficult to build, and it works without needing to tinker and adjust (the same could not be said of other Coaster Dynamix models). In October of 2018, we interviewed Jack Rimer of Coaster Dynamix about the new steel coaster inspired Sidewinder kit. I was excited to try it out but decided to wait. Flash forward to March 2020, they were having a sale so I finally bought one for my son (and myself). As tempting as it was, the set hid in a closest until this past Christmas when it was finally unwrapped and immediately put together. 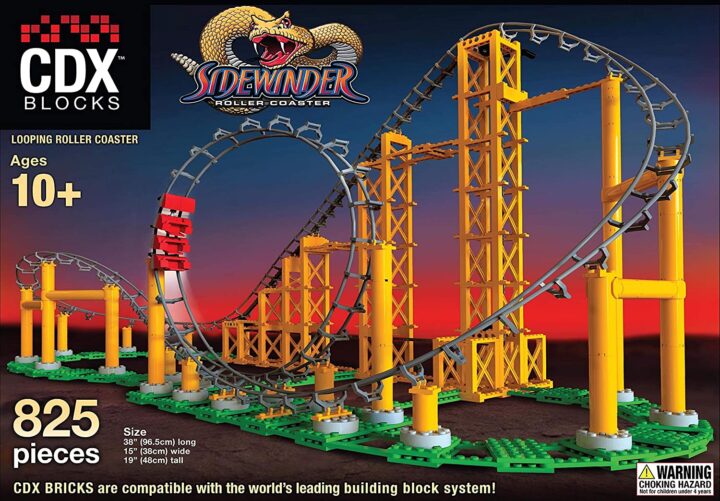 While the Sidewinder and Cyclone share the same train and track system, many of the base structure and supports are unique to the Sidewinder. I really love the realism of the model: the base is green like grass, then you have grey cylinders for the concrete footers, followed by cylindrical tube supports just like a real steel coaster.

You can see the improvements they made from the original Sidewinder design on Kickstarter compared to the production model. Some of the supports have been strengthened. The color was changed from red to yellow, which was a great call. As my son said when he opened the box, “it looks like Steel Curtain at Kennywood.” 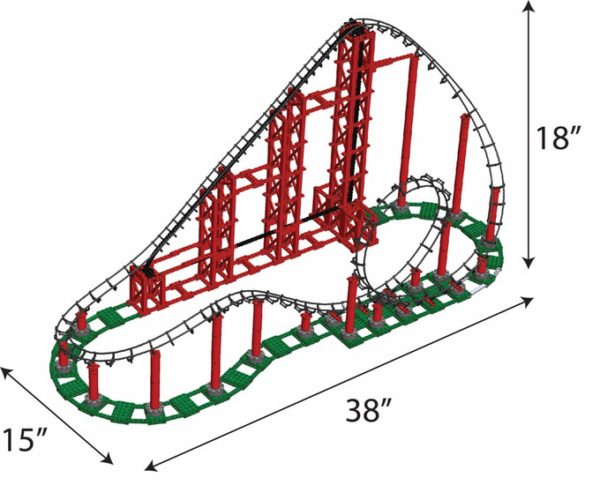 The original Sidewinder design from the Kickstarter campaign

The biggest challenges for us when building the Sidewinder kit were:

Except for a few odd quirks, I found the CDX Blocks to be pretty comparable to official LEGO pieces. The consistency of the clutch strength of the parts was a little weird though. Some parts, like the rod connectors that connect the yellow cylinder pieces, were crazy tight. The interference fit was so tight, I couldn’t get a few of them to come apart. And then I had the opposite problem with many of the grey “footer” pieces not sticking to the green base pieces as the rails pulled the whole support column up away from the base.

As you can also see in the video below of the Sidewinder in action, I replaced the hand crank with a LEGO power functions motor (CDX also sells a motor). I also combined some of the cars from the Cyclone kit with the Sidewinder to make a longer train.

Of all the roller coaster models and toys I’ve had the pleasure of building, these CDX coasters still rank as my favorite. They’re relatively easy to build, though slightly more challenging than your average LEGO set due to setting the base of the turns and the track assembly. But they work like a dream. The cars roll along the track so well, much better than any K’NEX coaster meaning you can build longer and more realistic layouts with less height. Unlike the official LEGO coasters that use just a few pre-made track pieces over and over, the only limit to the number of designs you can make is your own imagination.

Overall, they’re great sets and I highly recommend them. There are currently four sets available, two bigger ones in the Cyclone and Sidewinder and two smaller layouts, Flyer and Little Dipper. 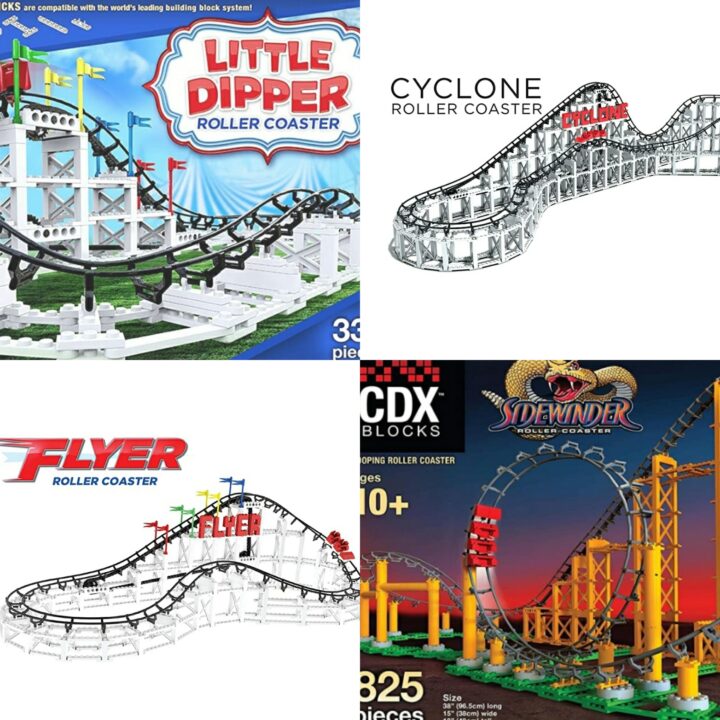 Have you had the pleasure of building the CDX Blocks Sidewinder or any of their other sets? Let us know which one and how it went in the comments below!