CAVU Designwerks has announced their newest product, which is certain to raise the standard of walkthrough attractions in the amusement industry. Called Quest, it will become themed entertainment’s first modular walkthrough ride. This interactive attraction will also be a world’s first.

“With this attraction, we wanted to reimagine what it means to interact with an experience, by combining the agency of a walkthrough, the mechanical and theatrical elements of a dark ride, and new modes of interactivity using advanced technology.” Said Mark Stepanian, Chief Experience Officer for CAVU.

Quest is an experience that can be linear or non-linear comprised of a series of modules that CAVU offers. In a webinar today, Stepanian noted that CAVU has a catalog of more than “standard” 65 modules, and are also open to customization. These modules are comprised of a wide variety of footprints and price ranges, which makes the possibilities endless for any level of entertainment. It is CAVU’s goal to bring the level of immersion traditionally found in a dark ride to a wider audience, from malls, to FECs, to major amusement parks, and everywhere in between.

The media for the attraction operates in such a manner that there is a high “re-ride/re-playability” and can be swapped out to include seasonal and other overlays.

CAVU demonstrated several modules that take advantage of all five senses, including The Rickey Bridge, which is a motion platform, and features 360-degree imagery, along with integrated sound.

The River Riders Module is larger, and includes a version of CAVU’s self-driving ride vehicles (announced last year at IAAPA). Riders will stand in these vehicles and “float” down a projected river through scenery.

In the interactive room, visitors movements (down to following eyes) are tracked using infrared cameras, which can simulate a headlamp to explore a cave that is being projection mapped in real time, to see hidden images on the walls.

In the weight table module, guests have to maneuver themselves in such a way that a ball moves through a maze in order to move on to the next room.

CAVU’s Quest was created out of the need for an attraction that is smaller, more modular and flexible, less expensive and with the ability to deliver on a compressed schedule. Considering the current landscape, Quest further spreads out guests while still maintaining throughput. As an innovator it is important for CAVU to create attractions that tell compelling stories in different ways from traditional ride systems.

In the themed entertainment industry, vehicle-based experiences represent a huge majority of the attractions. CAVU’s focus was on decoupling an immersive attraction from the vehicle to allow for new simulation experiences without vehicles. Because guests can get physically closer to the environment, the story-telling experience is more intimate and allows for endless possibilities.

“To reach the widest possible applications, we have approached this attraction using a modular approach,” said Stepanian. “Designers can look through a range of “menu” options that include mechanical equipment types, visual effects, scents, and more.” 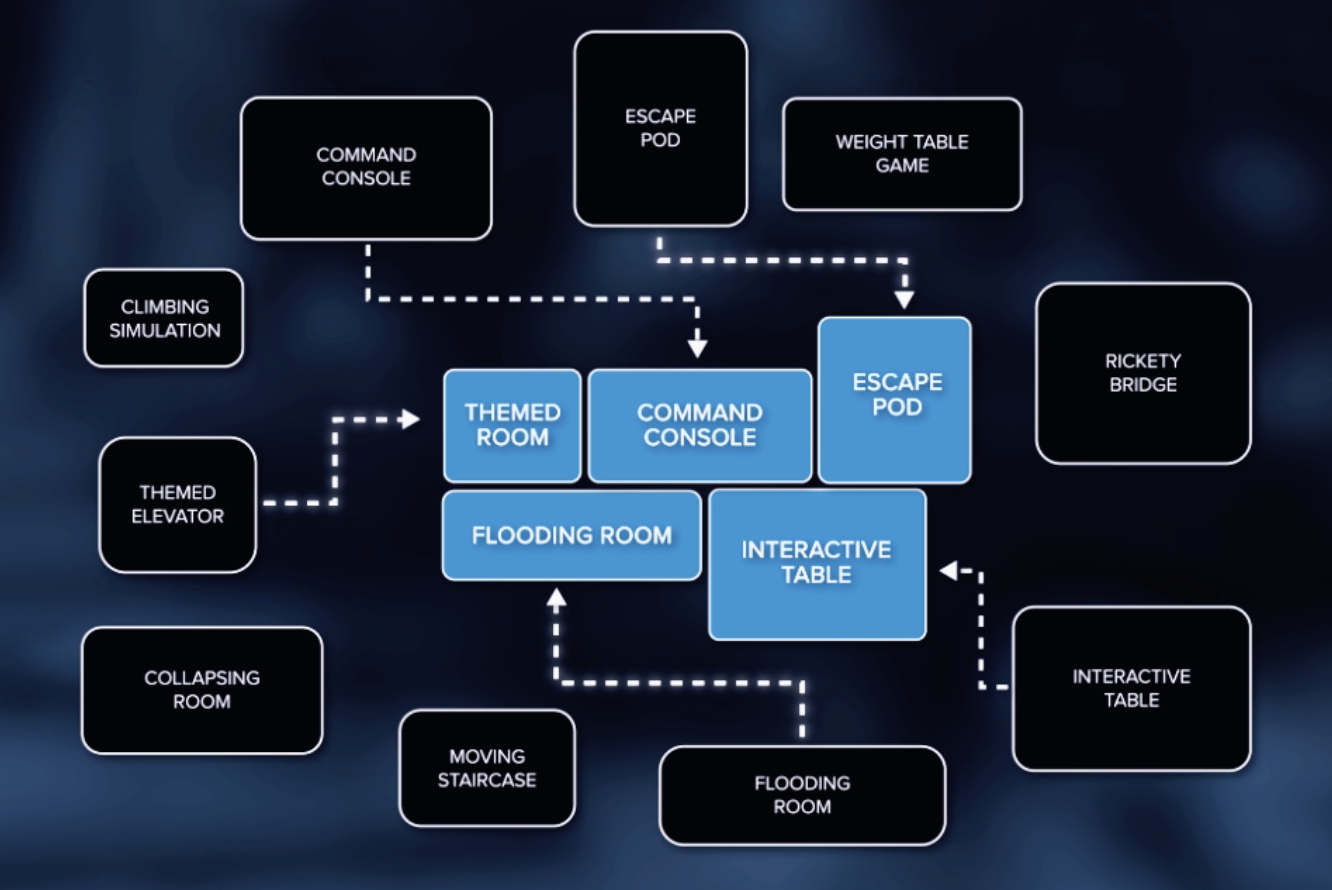 Throughput can vary, depending on size of the attraction, with groups of 4-10 people “pulsed” every 40-75 seconds. There is also the option to duplicate modules, and run the same experiences parallel to one another. Through the modular construction, a full immersive experience can take up a fraction of the typically space required for a dark ride.

Quest can be best described as “a whole new genre of attraction for the industry,” that combines walkthrough attractions with dark ride immersion, stage show elements, and all-new, emerging technology. It’s a platform that tells compelling stories in many ways, and rather than guests following the same story over and over on a fixed ride vehicle, they get to become the story themselves.

For more information, be sure to visit CAVU Designwerks’ website!