Kings Island is home to an impressive lineup of 14 roller coasters, one of which is a two-track racing coaster. After visiting the park several times over the last 10 years, I decided to take on the challenging task of ranking them.

I separated my rankings into steel and wood categories, as I think it’s unfair to clump the two together when a park has so many coasters.

So let’s get started with the steel coasters. Note: I haven’t ridden the Great Pumpkin Coaster (I’m too tall with no kids of my own), so I didn’t include it in my ranking.

Invertigo is the suspended equivalent to Vekoma’s popular boomerang coaster. If you’ve ridden one of those, you’ll find Invertigo to provide a familiar ride experience. 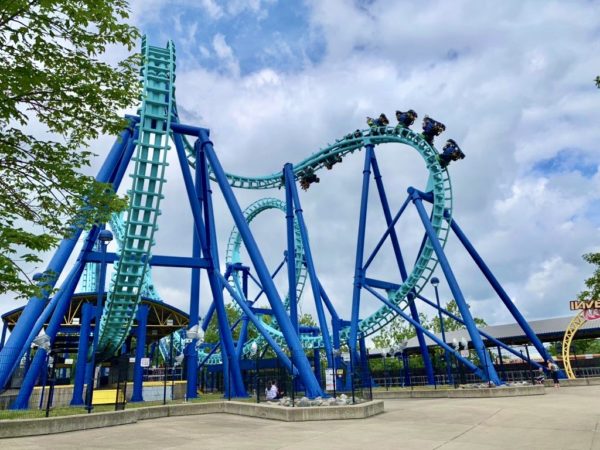 Vekoma’s boomerang-style coasters are notoriously rough, and unfortunately, Invertigo was no different. But if you can get past that, it does provide a dizzying — but perhaps not vertigo-inducing — ride experience.

Flying Ace Aerial Chase is a Snoopy-themed, family-friendly suspended coaster, also manufactured by Vekoma. It’s a modest increase in intensity from the park’s smaller offerings such as Great Pumpkin Coaster and Woodstock Express. 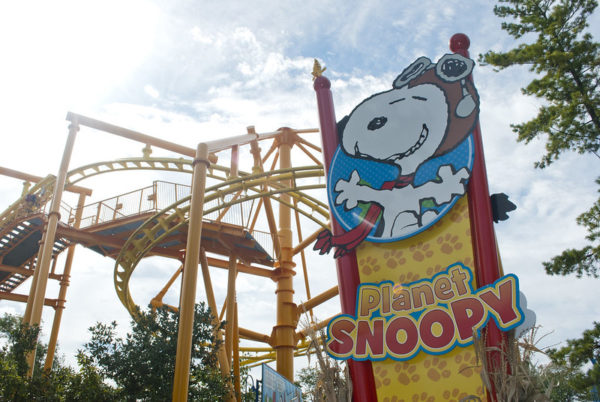 Like its distant, much larger cousin, Invertigo, Flying Ace Aerial Chase is a little rough around the edges. But for thrill-seekers in training, this is a great “training wheels” coaster. 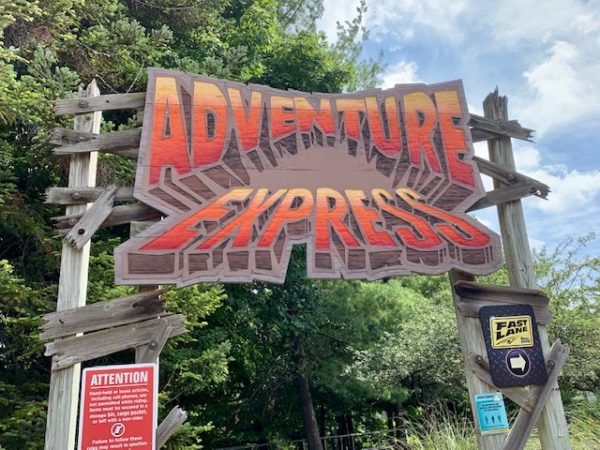 The ride is moderately themed, especially in the enclosed second lift hill that trains ascend as they return to the station.

Like other Arrow Dynamics mine train coasters, Adventure Express features two lift hills. However, the action begins on Adventure Express soon after trains depart the station — they plunge down a hill, fully utilizing the park’s rugged terrain. 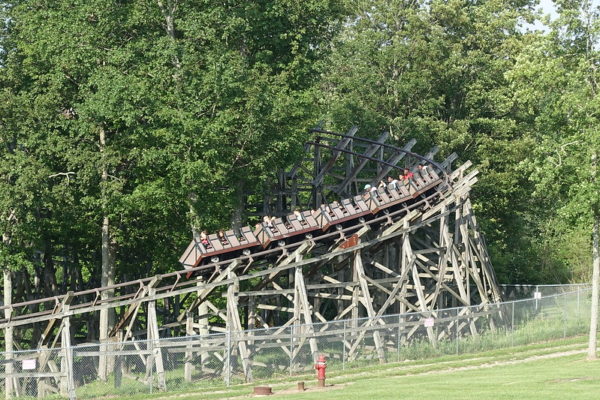 It’s one of the more intense and unique Arrow Dynamics mine trains I’ve ridden. The coaster’s three tunnels add even more fun to the mix.

I was a little disappointed in the coaster’s anticlimactic ending (the aforementioned enclosed lift hill that returns riders to the station), but I appreciated the extra effort made on the theming and animatronics.

Flight of Fear is a Premier Rides LIM coaster — I call it a “spaghetti bowl” coaster due to its tightly twisted layout. But you won’t see it from the midway — Flight of Fear is totally enclosed. 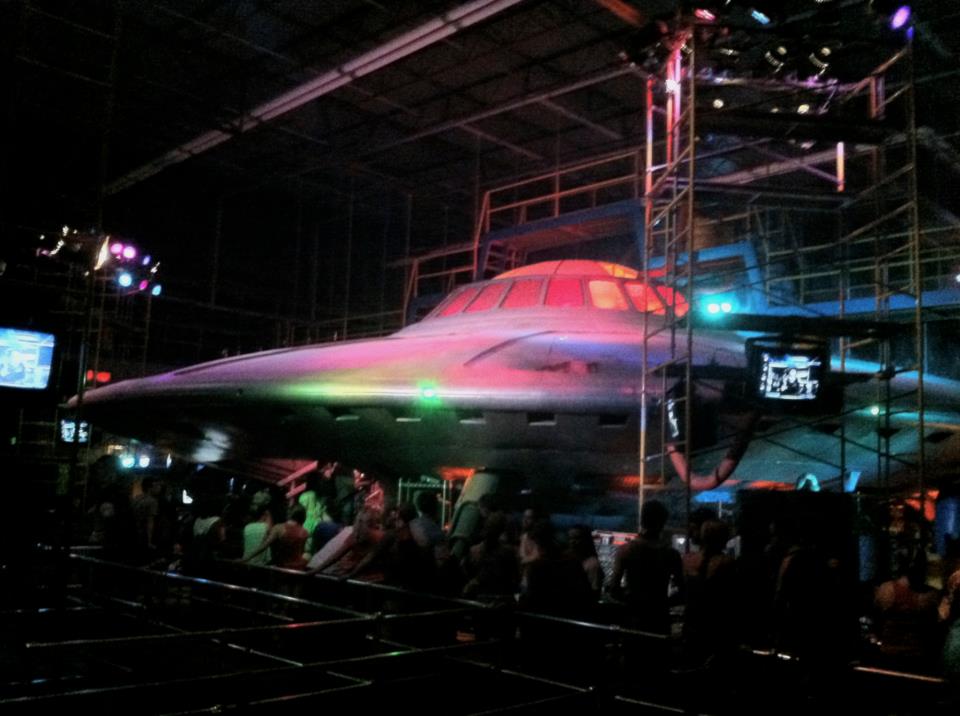 Flight of Fear’s heavily themed queue is one of my favorite things about the coaster. Built during the movie-inspired Paramount era of Kings Island, the coaster has retained its alien/UFO theme.

The 0-54 mph launch is forceful, the four inversions are snappy and the 2,700-foot-long layout is well-paced aside from a mid-course brake run.

The video below will give you an up-close look at Flight of Fear with the lights on:

Originally known as “Italian Job: Stunt Track” when it opened in 2005, the since-genericized Backlot Stunt Coaster packs a surprising punch with a 0-40 mph launch that leads into a disorienting double helix up a structure mimicking a parking garage. 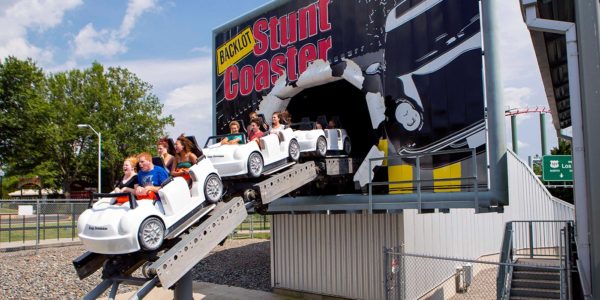 The coaster is undoubtedly the most themed in the park. It was designed to recreate the climactic chase scene of The Italian Job film. Though the name has changed, the LA-inspired set pieces remain, including a mid-course show scene with a firing helicopter and flame effects followed by a second launch. 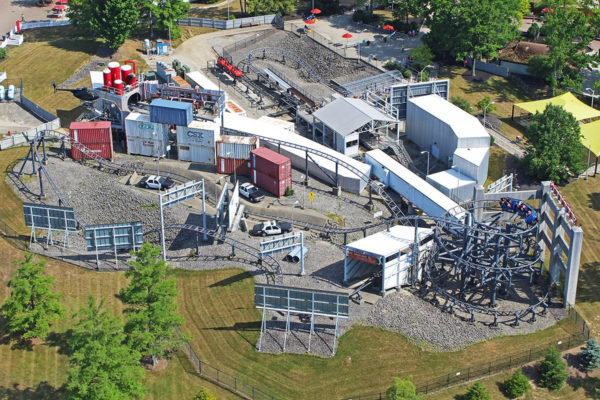 Aside from the first launch and double helix, the rest of the coaster is relatively tame. It’s another great addition to the park’s roster of family-friendly thrills.

Bat earns extra points for its status as one of only five Arrow Dynamics suspended coasters still in operation. But regardless of its status, Bat is still a fun ride from start to finish. 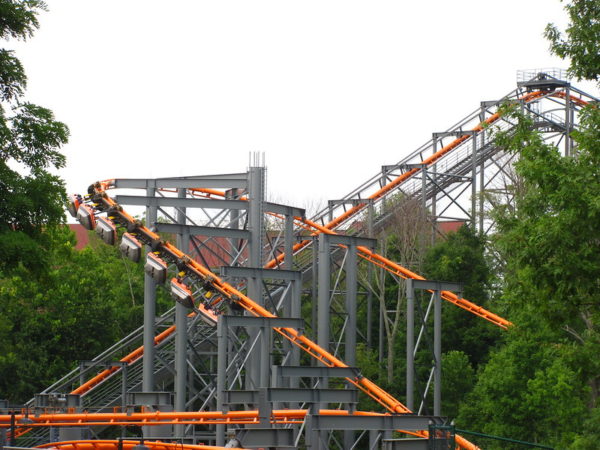 I like that the coaster is set away from the hustle-and-bustle of the park’s Action Zone area. Guests approaching the coaster have nearly unobstructed views of its orange track. The trains come near feet from those lining up to ride.

First opening as Top Gun in 1993, then renamed Flight Deck in 2008, the coaster was again renamed in 2014 as simply “Bat,” a throwback to Arrow’s short-lived suspended coaster prototype of the same name, which operated at Kings Island from 1981-1983. 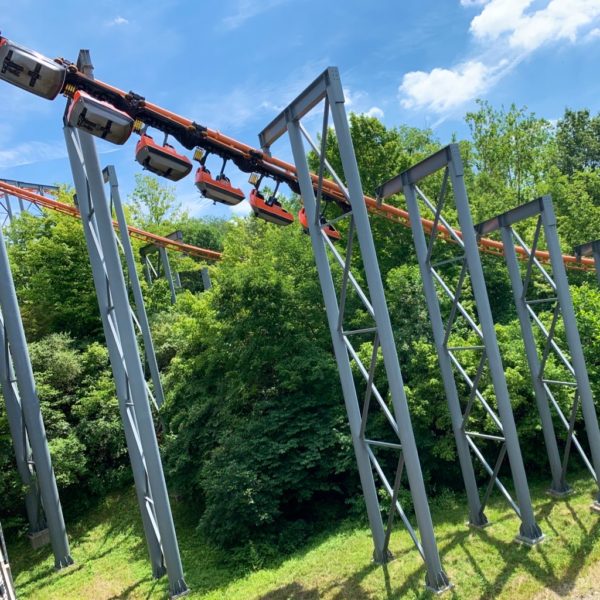 Despite its age, Bat is surprisingly smooth. And though its layout is relatively short, nearly every foot of track is used to the fullest extent. It’s an easy coaster to miss due to its location, so ride it as soon as you can.

Banshee is one of Bolliger & Mabillard’s (B&M) newest inverted coasters and remains the longest inverted coaster in the world. The coaster towers an imposing 167 feet above the Action Zone area of the park. Its first vertical loop encircles the lift hill. It’s one of the most photogenic coasters at Kings Island. 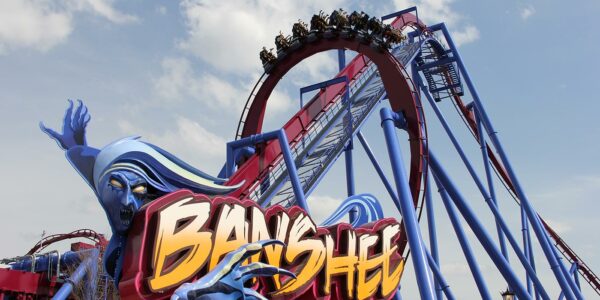 The second half of the ride is incredibly relentless — in the best way possible. The zero-G roll leads directly into a twice-inverting pretzel knot that transitions into a second vertical loop followed by an inline twist, which is rare for a B&M inverted coaster. 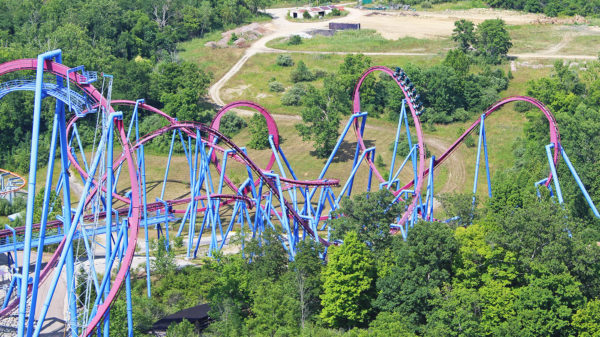 Banshee was one of the rougher B&M inverts that I’ve ridden, which is surprising for a coaster less than 10 years old. But the slight rattle didn’t prevent me from enjoying every second of this inverted work of coaster art.

Over 10 years after its opening, Diamondback remains one of my favorite B&M hyper coasters. Its out-and-back layout isn’t groundbreaking, but its elongated trains and splash-down finale both make for a unique ride. 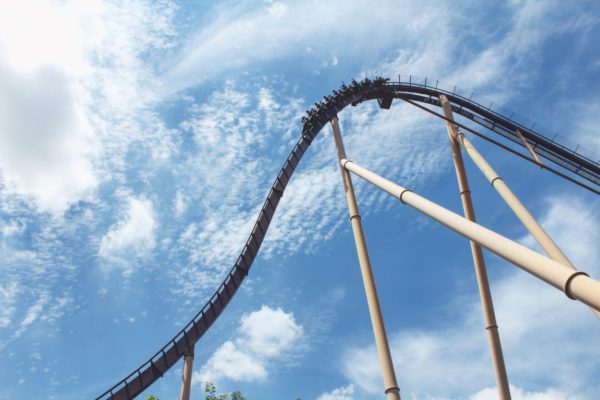 The “floater” airtime that is standard on B&M hypers is consistent across Diamondback’s camelback hills. 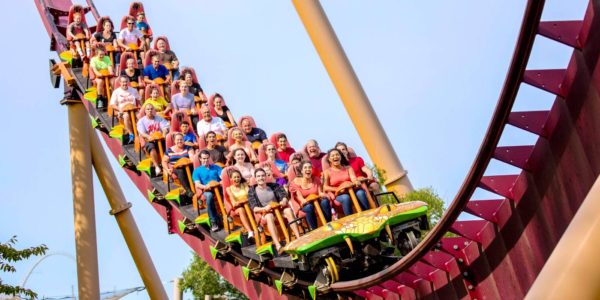 Diamondback may have been dethroned from my #1 spot (keep reading), but it’s still a world-class roller coaster.

The new-for-2020 Orion commands the Kings Island skyline as you approach the park. Its imposing lift hill taunts soon-to-be riders as they wait in line. 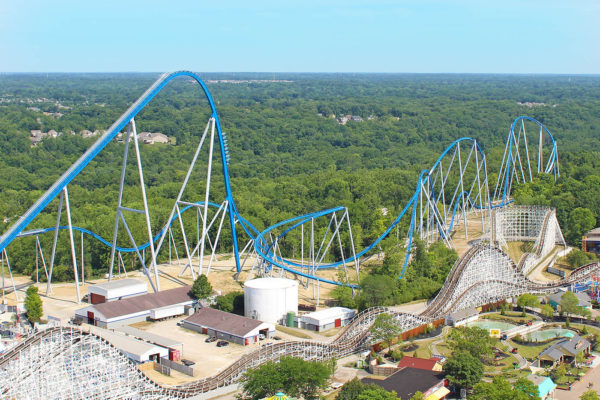 Though Orion and Diamondback are products of the same manufacturer, these B&M coasters provide completely different ride experiences. 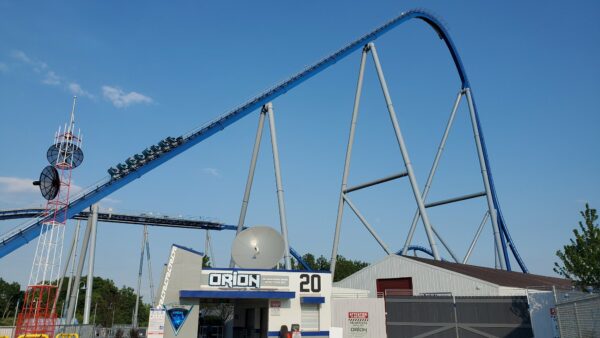 The ascent to the top of the lift hill is swift but provides beautiful vistas of the rolling hills and tree canopy surrounding the park. But the serenity of the view doesn’t last long. The intensity of the 300-foot drop made my eyes water as if I were chopping onions. The force exerted on me at the base of the drop was unmatched. The speed hill following the horseshoe turn provides a blast of airtime atypical for B&Ms. 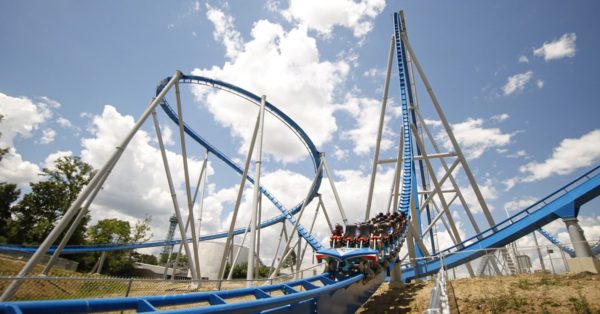 But what is possibly the most intense element on the coaster is the “Orion’s Belt,” a 125-foot-tall helix that gave me tunnel vision each time I rode.

Orion is too short, but what it does with its 5,300+ feet of track is nothing short of amazing. It has forever changed the coaster landscape at Kings Island.

Kings Island is home to an impressive selection of four wooden coasters (five if you could Racer’s two tracks).

Racer was the letdown of my most recent trip to Kings Island. I don’t recall it being so painfully rough. I certainly don’t expect a 1972 wooden coaster to provide a ride as smooth as Diamondback or Orion. However, I found both tracks to be nearly intolerable. 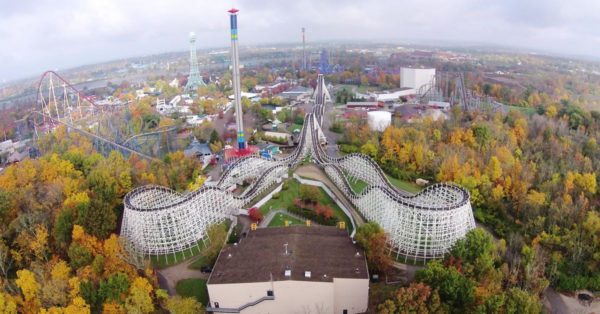 Even the recently re-tracked sections of the coaster were uncomfortable. 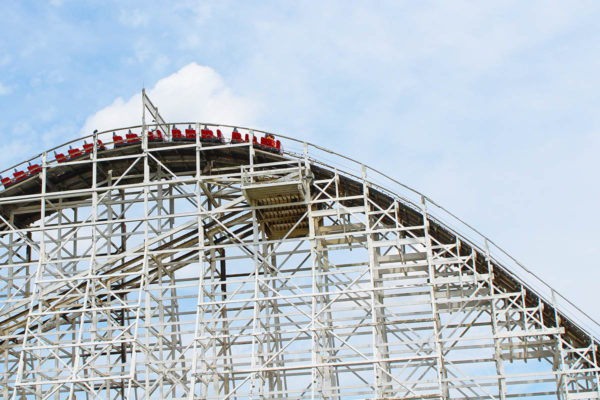 But despite the discomfort, I’m thankful that Kings Island has kept this classic around and is still allowing the two trains to race.

Woodstock Express was another surprise hit. Despite being as old as Racer, it provided a noticeably smoother ride. Granted, it’s much smaller, but I know of several similarly-sized wooden coasters that haven’t held up as well. 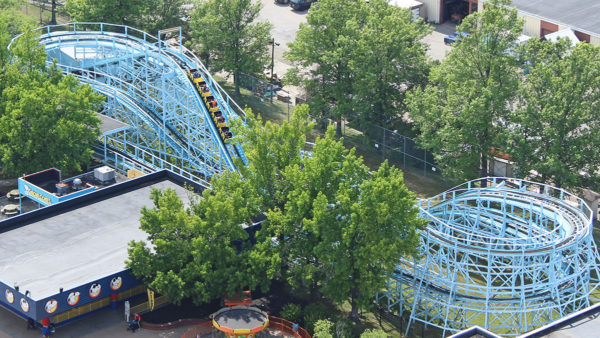 Woodstock Express is perfect for a first-time wooden coaster rider. It’s not too tall, and the entire family can ride together. 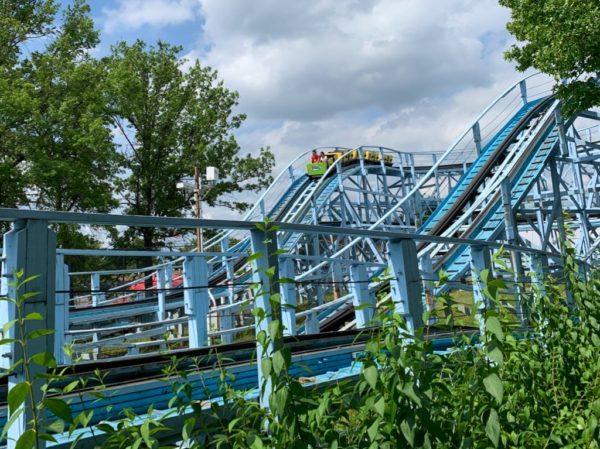 It’s a can’t-miss for coaster enthusiasts of all ages.

I debated for some time over my top-2 favorite wooden coasters at Kings Island. They’re so different yet so good in their own ways.

Mystic Timbers is undoubtedly one of Great Coasters International’s (GCI) best works yet. 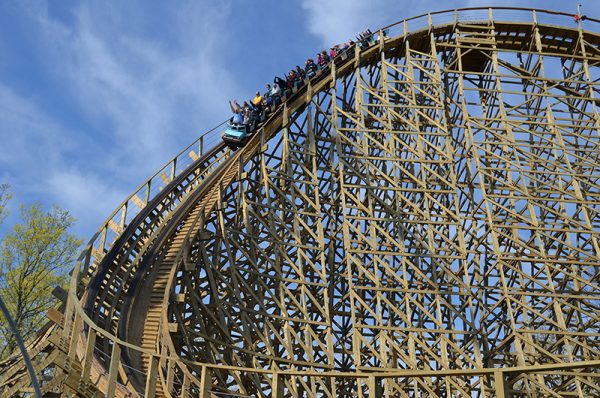 The coaster’s sprawling layout keeps close to the ground, twisting and turning in ways that seemed foreign for a GCI. The coaster is ferociously fast from start to finish. No momentum is lost to hills or elevated turns. 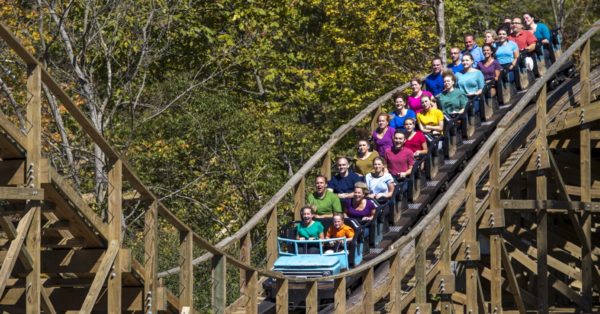 A second ride is a must to truly appreciate its layout and intensity. It did what few coasters can do: leave me speechless.

I will say, I was rather unimpressed by the “shed” at the end of the coaster. I think it was overhyped by the park during the coaster’s and made for quite a dud of a finale. Perhaps it would have made more sense for it to precede the coaster.

Luckily, though, the show scene had no effect on the ride itself. And I will say, the theming was top-notch for a Cedar Fair park.

Beast is perhaps one of the most legendary and iconic wooden coasters in the world. It takes full advantage of Kings Island’s hilly terrain, staying mostly close aside from its two lift hills. Its trains blast through each of the coaster’s three tunnels with an unmistakable deafening roar. Night rides on the coaster can make for a defining moment in any coaster enthusiast’s life.

After four decades of operation, Beast remains the longest wooden coaster in the world at 7,359 feet. It was designed and built in-house and was and still is a marvel in roller coaster design. 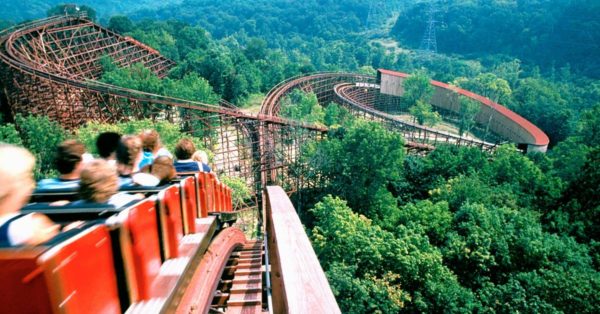 The coaster offers a modest reprieve in the form of a second lift hill. Think of it as an intermission to the action. 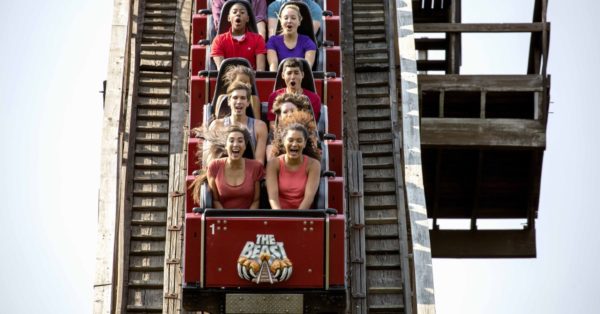 Make no mistake, Beast is a rough ride. If you prefer the smoothness of Mystic Timbers, this may not be first on your list of favorite wooden coasters at Kings Island.

However, if you don’t mind being jostled around, Beast is for you. 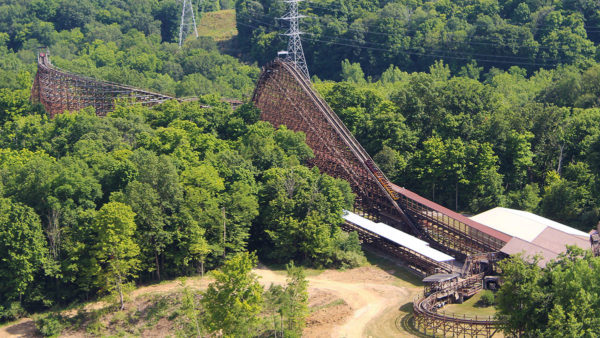 Due to the recent demise of the park’s Vortex coaster, an unobstructed view of the coaster’s first lift hill (and the crest of the second) is clearly visible from the park’s Eiffel Tower observation deck.

How would you rank Kings Island’s steel and wooden coasters? Share your rankings in the comments section below.