For our next stop in our 20 in 2020 look at coasters celebrating their 20th anniversaries this year, we’re heading back to the California, and to a park that we also featured in our 19 in 99 series last year. On March 18, 2000, Six Flags Discovery Kingdom opened Medusa, the first Bolliger & Mabillard floorless coaster on the West Coast. 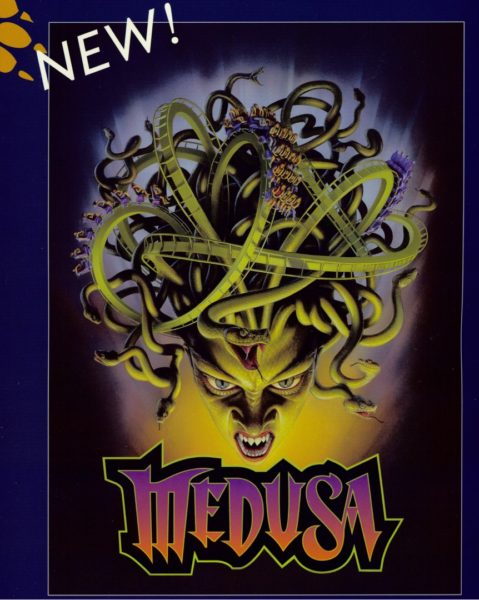 As we talked about in our look at Roar last year, Six Flags Discovery Kingdom — then known as Six Flags Marine World — was transitioning from and animal-only park to a hybrid amusement park and zoo. Six Flags took over the Marine World in 1997, and after adding some small rides and off-the-shelf attractions, they started building custom coasters. First Roar opened in 1999, and then in 2000 came Medusa. It marked the full transition of the Marine World from animal park to amusement park. 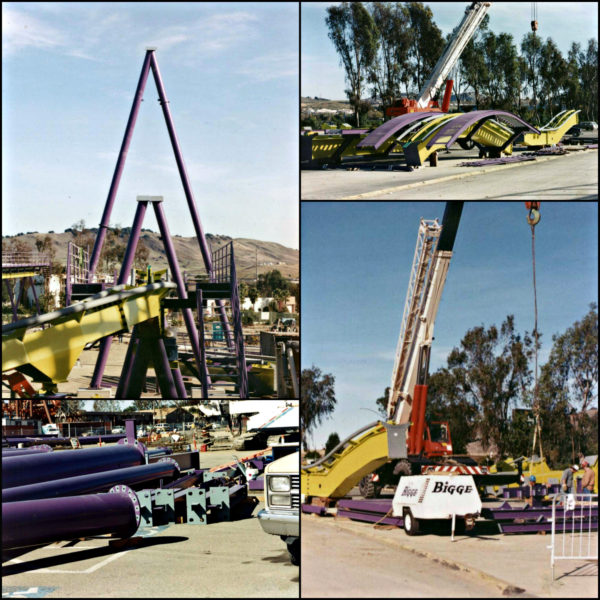 Medusa stood out for a few reasons when it opened, and in a lot of ways she put the park on the map. As mentioned above, it was the first floorless coaster on the West Coast. The original press release described it saying, “the coaster’s unique floorless design delivers an unrivaled feel of flying as riders soar through the air at 65 mph on open-air, pedestal-like seats with legs dangling!” 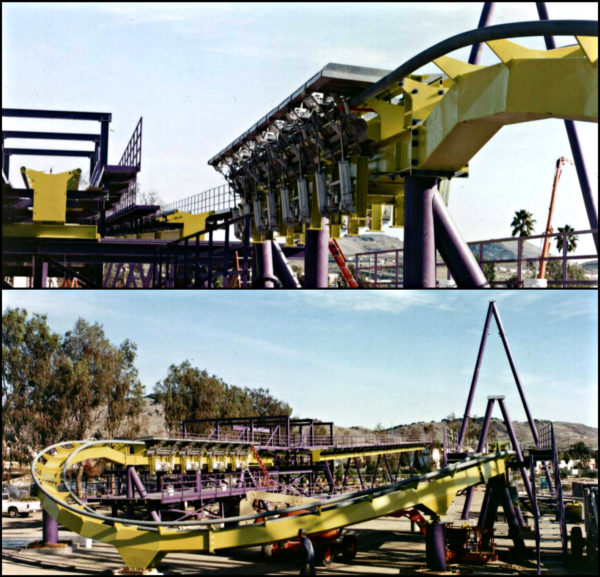 Medusa also featured the tallest vertical loop in the world when it opened, at 128 feet. Plus, it had the first ever “Sea Serpent roll” on a B&M roller coaster. For Northern California, Medusa set a new standard for length and height, topping anything at rival NorCal park, California’s Great America. It became the second longest B&M coaster in California, just behind Riddler’s Revenge at Six Flags Magic Mountain (but had a longer drop than Riddler’s). And while it was only the second coaster in California to feature 7 inversions, it’s safe to say Medusa’s are a bit more pleasant than the ones on Viper at Magic Mountain.

While Roar was a great addition to the park in 1999, Medusa suddenly gave the park one of the biggest coasters on the West Coast, and some of B&M’s best work at the time.

The Medusa station is actually surprisingly well themed for an average Six Flags coaster, with good rock work and foliage around the entrance. The ride itself sadly suffers from being a bit of a parking lot coaster, but at least the entry is good! From the station the trains climb the imposing hill to 150 feet, then dipping into the signature B&M “pre-drop”. Thanks to a small trench cut in the parking lot below, the coaster drops a full 150 feet. The drop immediately rises into the giant vertical loop, followed by a dive loop, reversing the trains direction back towards the station. 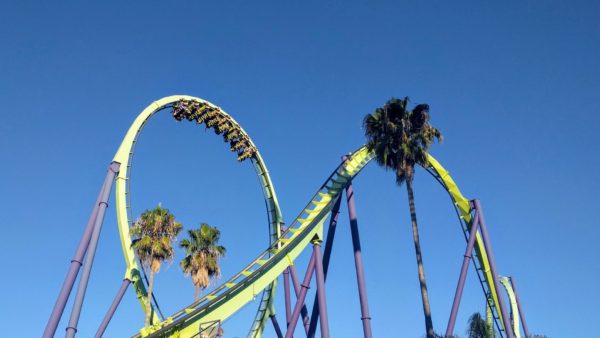 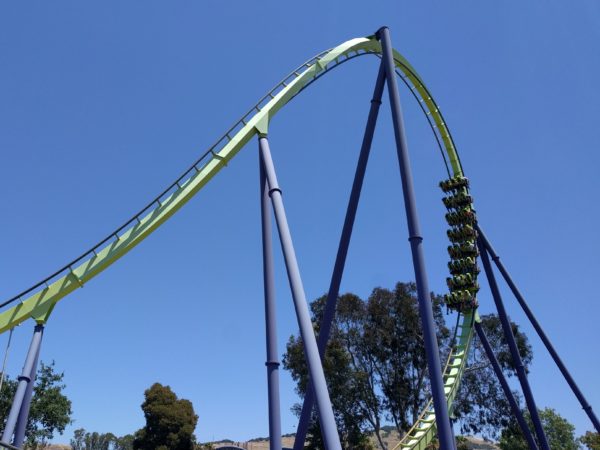 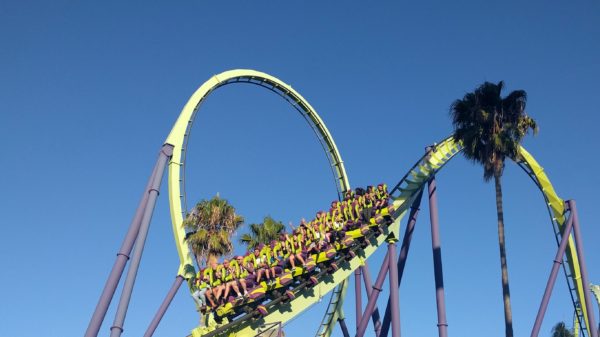 The coaster climbs into a zero-g roll that beautifully frames the vertical loop behind it, providing one of the most iconic images of the ride. 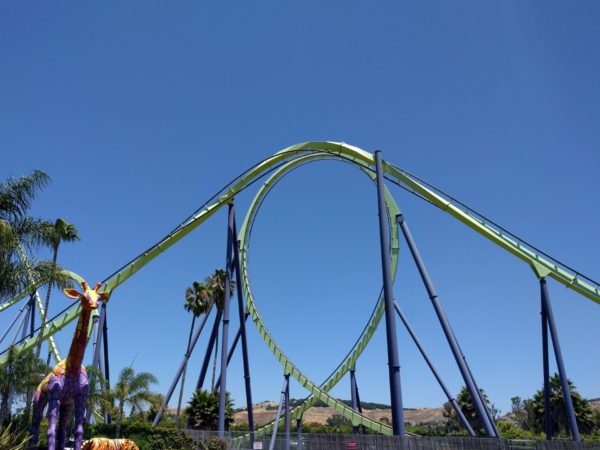 From the right angle, the zero-G roll frames the vertical loop beautifully.

The inversions keep coming with the rare Sea Serpent Roll element. The train first enters a half loop followed by a half corkscrew. It then enters another half corkscrew continuing forward, as if you were on a classic back-to-back corkscrew Arrow ride. The second half corkscrew goes into another half loop that leaves the coaster exiting the double inversion element going in the same direction it entered. It’s kind of like a Cobra Roll, but a Cobra roll reverses the direction of the train. 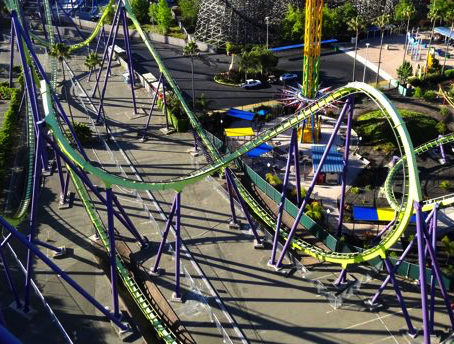 This photo from the top of the lift hill, courtesy of The Coaster Guy, captures the Sea Serpent Roll layout perfectly. 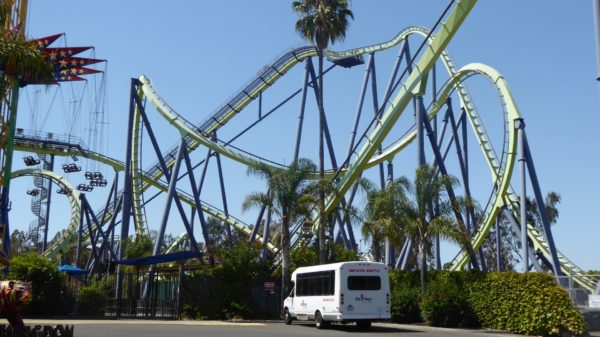 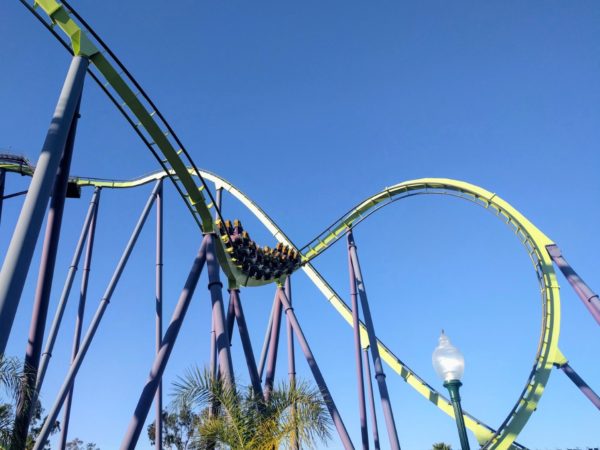 Train between the first and second halves of the Sea Serpent roll element.

Riders get a brief respite after the Sea Serpent in a mid-course brake run. The brake trims the speed slightly before sending you into the final stretch. The trains head down into a corkscrew, followed by a 270 degree helix. That leads into a second corkscrew and another 270 degree helix before finally returning to the station, over three minutes after the ride started.

Reactions to Medusa From Opening Day

The coaster received rave reviews from guests experiencing all those inversions on its opening day. 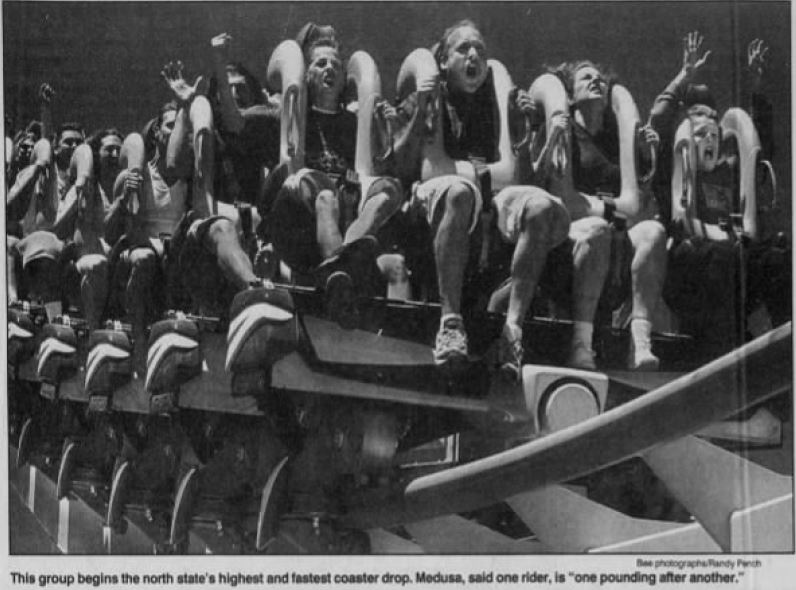 Riders on Medusa on opening day, from the Sacramento Bee.

“Just Awesome,” Neil Robbins of Portland, Oregon told the Sacramento Bee after getting his first ride. “The first drop was astounding.”

Angela Lyon of Vallejo, CA told the Bee, “It was beyond awesome. The Drop — it was awesome. You feel like you’re flying.”

And, in what was maybe a bit of hyperbole for the press, Steve Urbanowicz — author of “The Roller Coaster Lover’s Companion” — told the Napa Valley Register it was the best steel roller coaster in the world. “From the time you leave the station to the time you stop, it’s just one complete, amazing package,” he said. 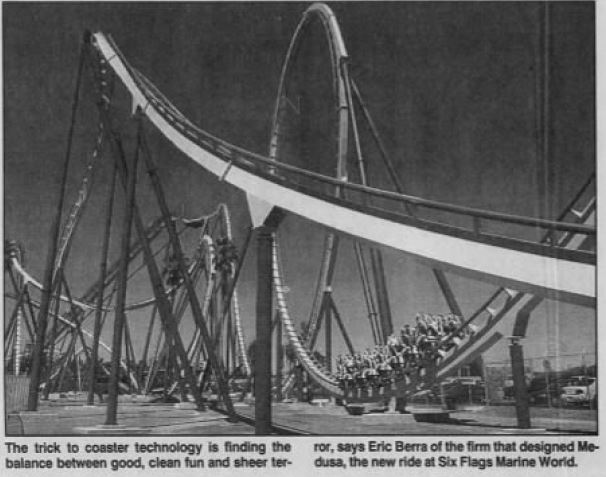 Kevin Courtney, a staff writer for the Register, wrote in his own review, “What happened (on the ride) was a blur, a rush, a constant scream…Then it was over. I sagged with relief and happiness. I was ready to do it again.”

For such an element filled ride, that was so highly reviewed on its opening, I’m often surprised Medusa doesn’t get talked about much. The giant vertical loop is fantastic, the ride is well paced with constant back to back elements, and, like with most modern B&M coasters, it’s consistently smooth. It was also a pretty big deal for the Six Flags Marine World, firmly establishing it as a rival to nearby California’s Great America, and marking the height the mini-coaster war between the two parks (which we’ll get to more later on in our series). 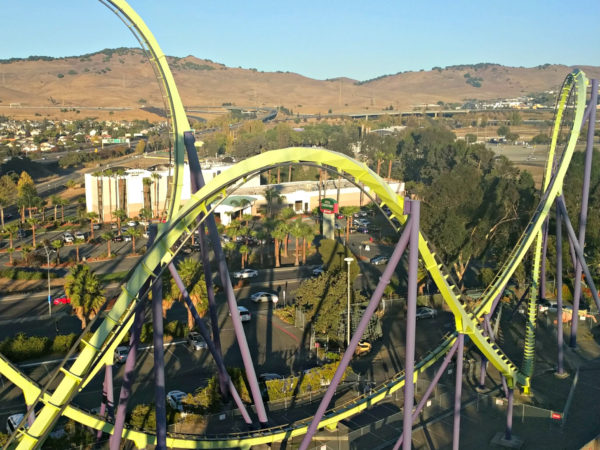 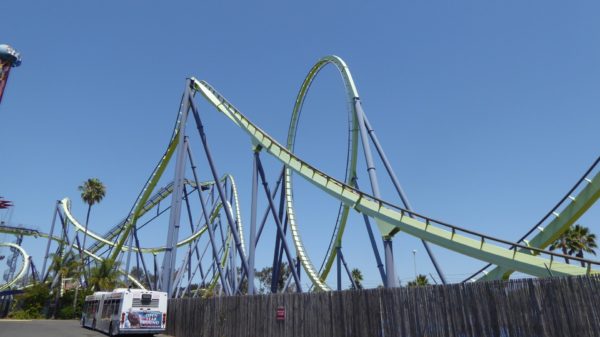 While it might not be the signature coaster at the park any more with Joker opening in 2016, it remains an “multi-ride” coaster for me any time I visit. It’s one of the best B&M floorless coasters out there. And, based on how well it still runs at age 20, I expect it’ll be with us for many more years, hopefully making new generations of riders say “awesome.”

If you’ve ridden Medusa, let us know in the comments below what you think of her! Were any of you there for opening day?

Also, be sure to check out the rest of our 20 in 2020 coaster features. Stay tuned for nine more features coming over the next few months!