Recently, our friends over at CoasterRadio.com brought back a fan favorite contest to engage with their podcast listeners; The “Ride Design Contest.” It’s a concept that’s easy enough to explain — listeners were encouraged to create a theme park ride that doesn’t currently exist, using any IP and any ride system, with the only limitation being a reader’s imagination, and a hypothetical $70 million budget. The projects would all be judged by an all-star panel of judges, including Rob Decker, former SVP of Planning and Design for Cedar Fair, Ernest Yale, founder of Triotech, Theme Park Journalist Arthur Levine, and perhaps one of the most high-profile theme park enthusiasts around, actor Neil Patrick Harris.

More than 60 entries were received (including one themed to the final scenes of 1994 Cult Classic, Heavyweights. You’re welcome!), which were narrowed down to a “Top 10,” (which sadly didn’t include “Heavyweights: Apache Relay”) and included roller coasters, highly immersive dark rides, and other unique experiences themed to properties like Harry Potter, Big Trouble in Little China, Pac-Man, and Starlight Express. Following votes from the CoasterRadio audience and hosts, that top 10 list was then narrowed down to list of semi-semi-finalists.

Among these semi-semi-finalists is a hybrid dark ride and roller coaster experience themed to Marvel’s Black Panther, named Black Panther: Vibranium Heist. One of the minds behind this attraction idea is Coaster101’s Shane Joseph, who along with his college classmate Alex Goyette, created the immersive ride experience that is set to be judged by Neil Patrick Harris and Mark McDonough, President of Creative Visions, in the semi-semi-final round. 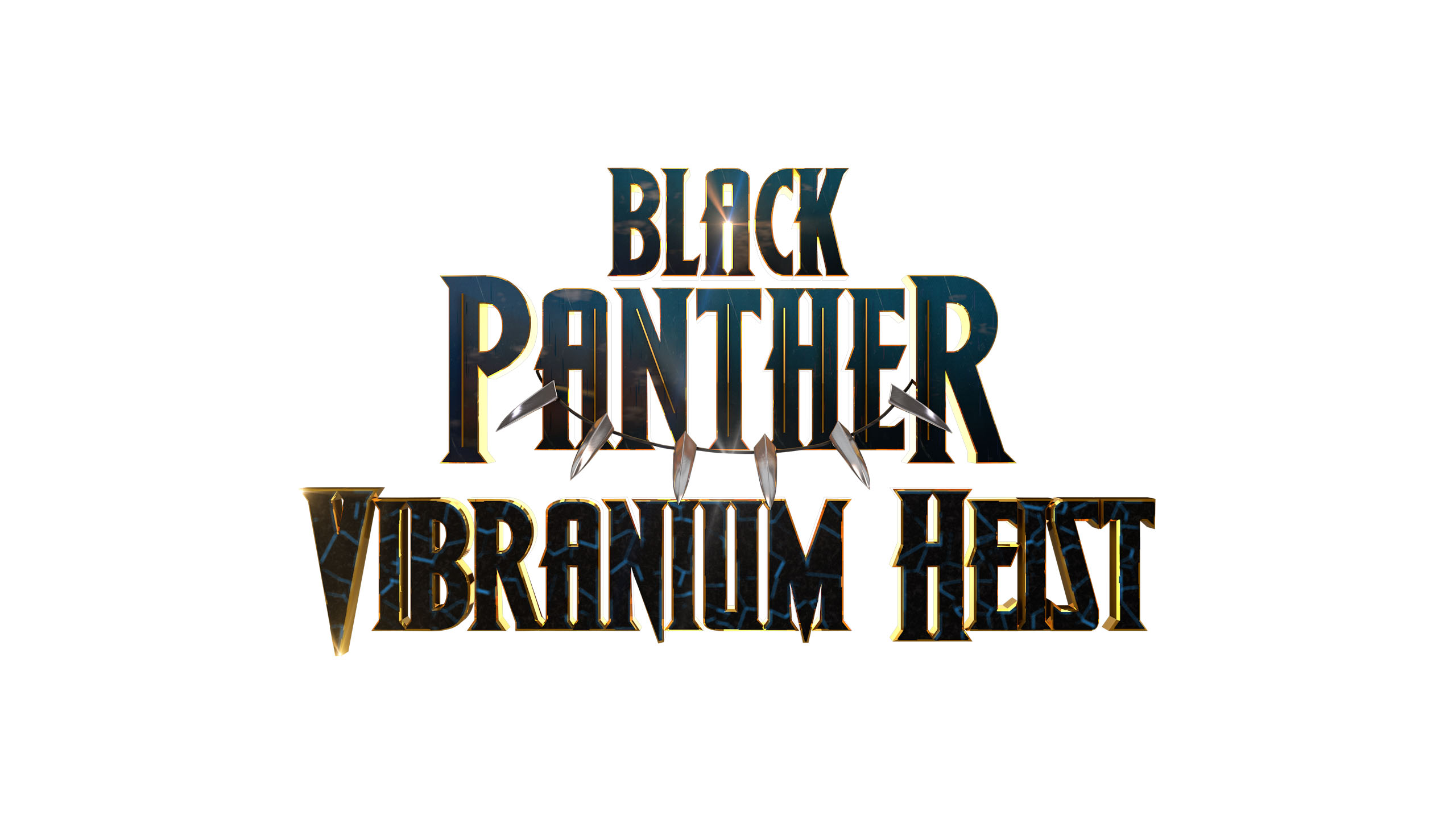 Joseph is an avid theme park enthusiast who understands the ins-and-outs of attractions, while Goyette is more fascinated by the overall thematic experience.

“Growing up, I always loved going to my local parks like Canobie Lake and Story Land, but I was never a big ride person. Just because of motion sickness and all that, I was never big on rides,” Goyette said. “But I always loved the storytelling in that and once I got older, I really fell in love with how Walt Disney turned his storytelling ability with films into a theme park experience. I always kind of took that as a really interesting way to look at attractions.”

When the contest was announced, it didn’t require a lot of inspiration for Joseph to want to enter the contest.

“It’s something that we think about all the time as theme park fans,” Joseph said. “We will see something or read something and we just say, ‘Oh, I would love this to be in a park’ or ‘that would make an awesome ride’.” I feel like that is how a lot of us are wired when we start thinking about stuff like that. It was just something that sparked my interest because of that.”

Goyette came on board early in the process, and was eager to get his creative juices flowing.

“It’s the one time you get to be fully creative with something like this and actually have a purpose to it and not just do it on your own,” he said. 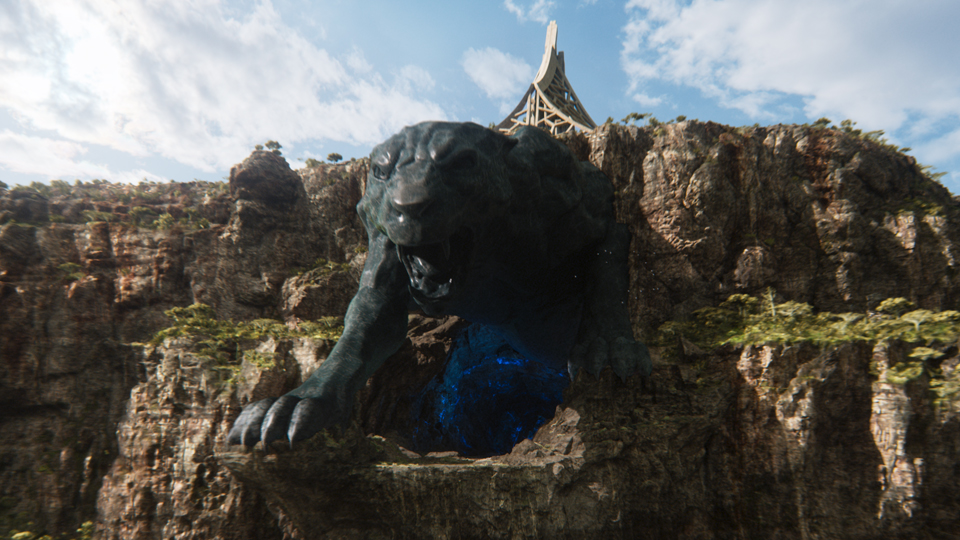 Joseph had the idea for a Black Panther attraction long before the Ride Design contest was announced, and envisioned it as a strong addition at Disney’s Animal Kingdom, noting that the pair had a conversation about a month prior about how the fictional Wakanda could be a replacement for Dinoland, due to Animal Kingdom’s ever-changing attractions. What the duo created was an captivating experience that was reminiscent at first glance of Star Wars: Rise of the Resistance at Disneyland and Disney’s Hollywood Studios.

A self-described “big” Star Wars fan, Joseph was all set to experience Rise of the Resistance at Disneyland during a spring internship before COVID-19 had other plans for his program. As such, he’s done his best to remain spoiler-free on the attraction. Goyette had no such qualms, and has watched countless ride-through videos. It proved for an interesting working dynamic.

“There were some interesting scenarios, though, where Shane would ask, ‘Oh, how would we do something like this?’ With me knowing how they achieved it in the Rise of the Resistance, trying to explain it without explaining the story with it was pretty challenging,” Goyette said with a laugh. 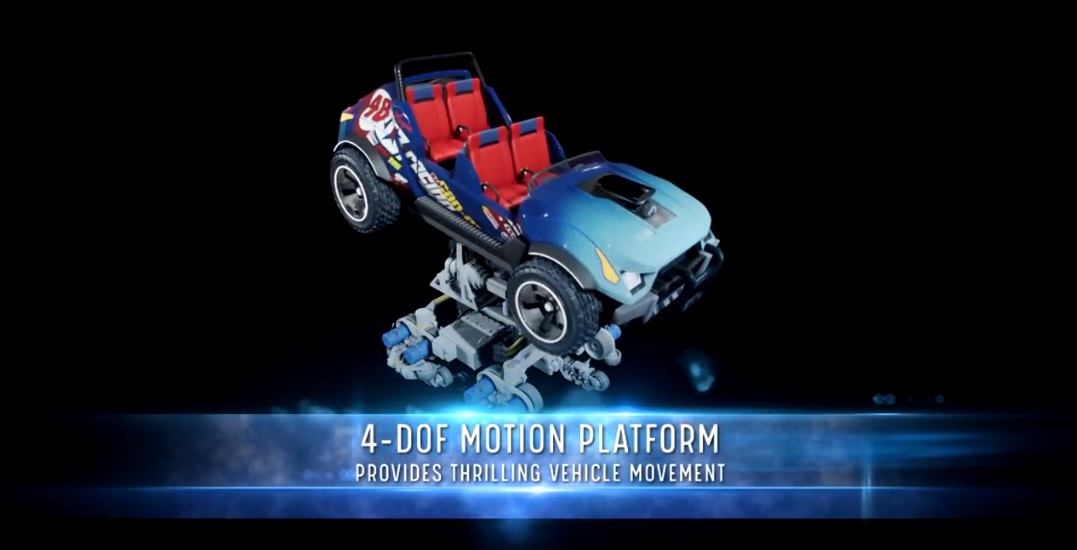 After a lot of research on a potential ride vehicle, the pair decided on using Dynamic Attractions “Dual Powered Coaster” as the ride vehicle for the attraction.

“We wanted something that could give us the speed similar to an attraction like Test Track at EPCOT, but have the platform and the ability to move and have that like the fourth dimension, like in Dinosaur at Animal Kingdom or Indiana Jones at Disneyland would have,” Goyette said. “When we found the Dynamic Attractions system, we looked at it and thought, ‘Oh, this is exactly what we need’.” 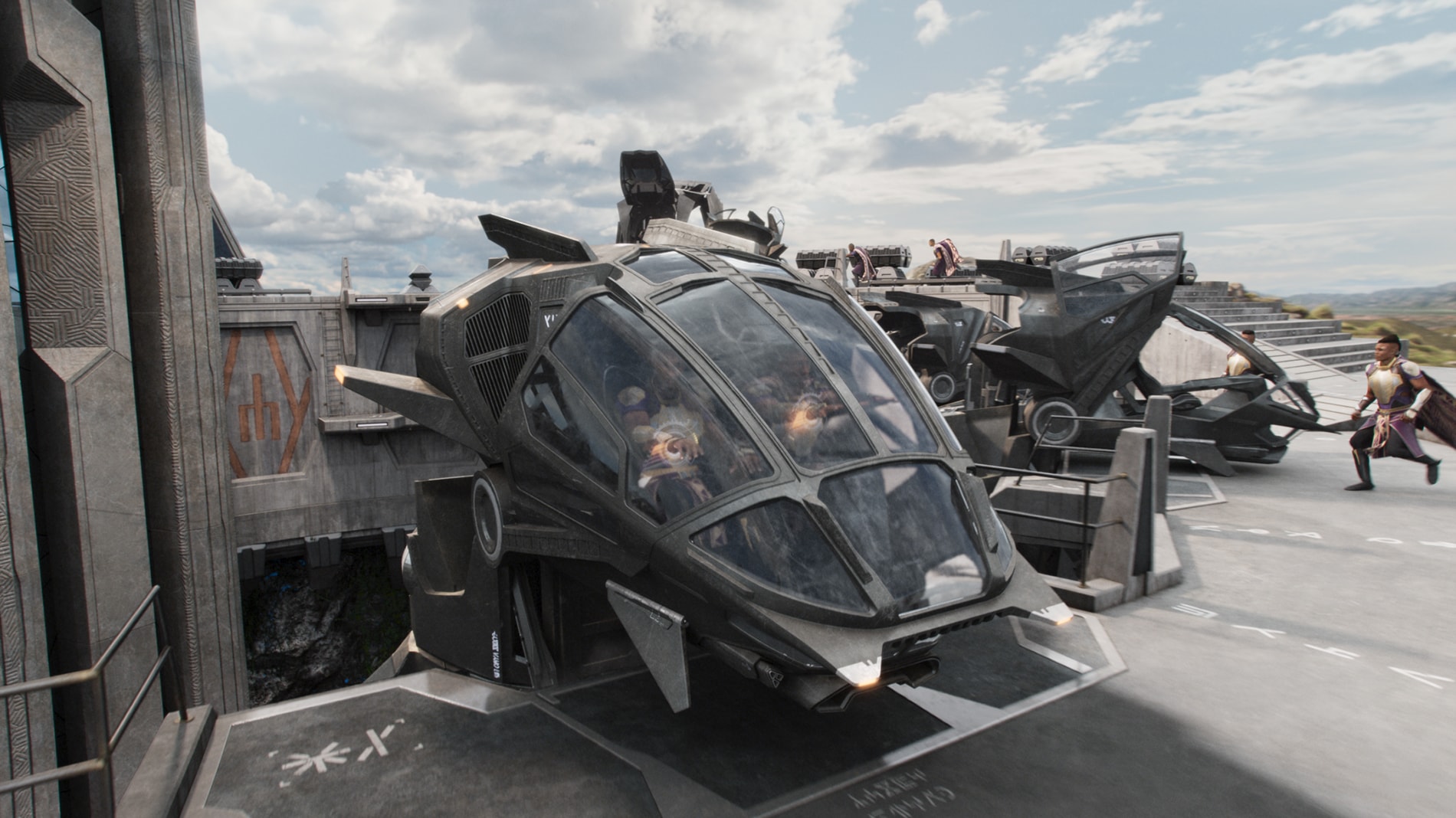 Without going into every detail of their ride, Joseph and Goyette have created a true Wakandan environment that features multiple scenes from the film including Mount Bashenga and Shuri’s lab. Riders board their attraction vehicles, and are transported through an environment that is a combination of physical and digital sets with multiple practical effects and animatronics. The attraction echoes some of the best features of recent Disney attractions including Avatar: Flight of Passage, Star Wars Rise of the Resistance, Pirates of the Caribbean: Battle for the Sunken Treasure, and Mickey & Minnie’s Runaway Railway. (For a full description of Black Panther: Vibranium Heist, check out CoasterRadio’s website!)

“Something that I’m very proud of that we were able to do is create the audio/video element of this project,” Joseph said. “I knew we had to do something beyond just the script and the treatment, to give the voters a real sense of what it would be like to experience this ride.” Joseph said the idea came to him after seeing a similar format in other media. “I am a big fan of the ‘Star Wars: The Clone Wars’ TV show, which was cancelled after five seasons, so the stories had to be continued in comic book form. Something that I came across that was really cool was that online creators would make these audio comics that could be watched like an episode, with the comic panels being narrated with sound effects. With Black Panther’s comic book source material, I thought this would be the perfect format for expanding our ride package.” 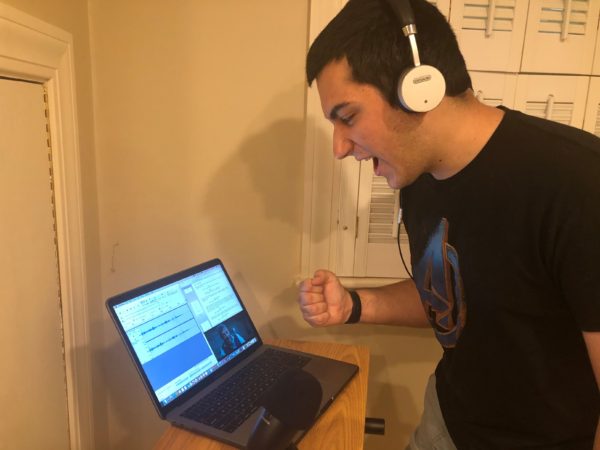 “We have to give a shoutout to our awesome voice actors for this,” Goyette added. For the project, they hired two professional voice actors, and the two other voices were provided by Joseph himself and a friend of his from Quinnipiac. “When we were thinking about the voices for the video, I was looking at Shuri’s voice, and was suddenly struck with this thought of, ‘Oh man, that’s Ohi!’, who is one of my friends at school. So I immediately reached out to her and she was so supportive and did a really fantastic job. In my opinion, she is even better than the professionals we hired!” The pair were not able to hire a voice for the ride’s villain, Ulysses Klaue, so Joseph had to take on the role himself. “It was a little daunting, because I’m not a great impressionist by any means, and Andy Serkis has such a distinctive voice. I actually hurt my throat quite a bit trying to get the voice just right, but in the end, I think it came together really well, so I couldn’t be happier!” 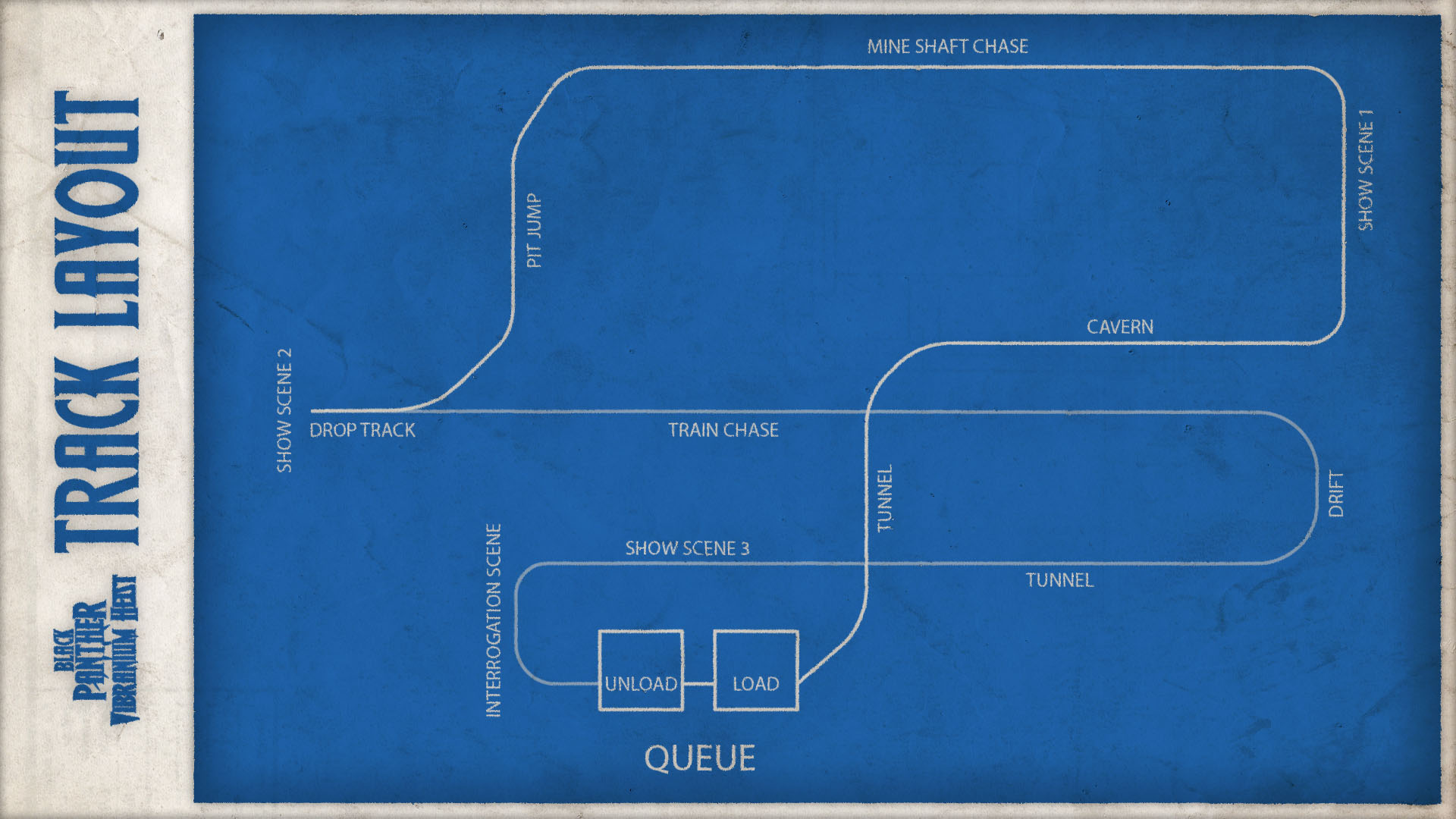 For the two Quinnipiac students, the opportunity to have their work evaluated by “big names” like Mark McDonough and Neil Patrick Harris (and potentially the rest of the all-star judging panel) is special.

“It feels pretty cool as you could probably guess,” Joseph said. “Anybody who listens to CoasterRadio knows Creative Visions from their work on the The Haunted Mine Drop at Glenwood Caverns in Colorado, and I was familiar with Mark McDonough through that. That was exciting enough and then, of course, when you put Neil Patrick Harris on top of that, especially because he is such a big Disney fan, it’s amazing. I know he helps out on some of the Disney holiday events and he was the voice of California Screamin’ before it became the Incredicoaster. So, knowing that there is kind of a celebrity of that caliber who is also interested in the same thing that I am, who will also read a project I worked on, it is pretty surreal.” 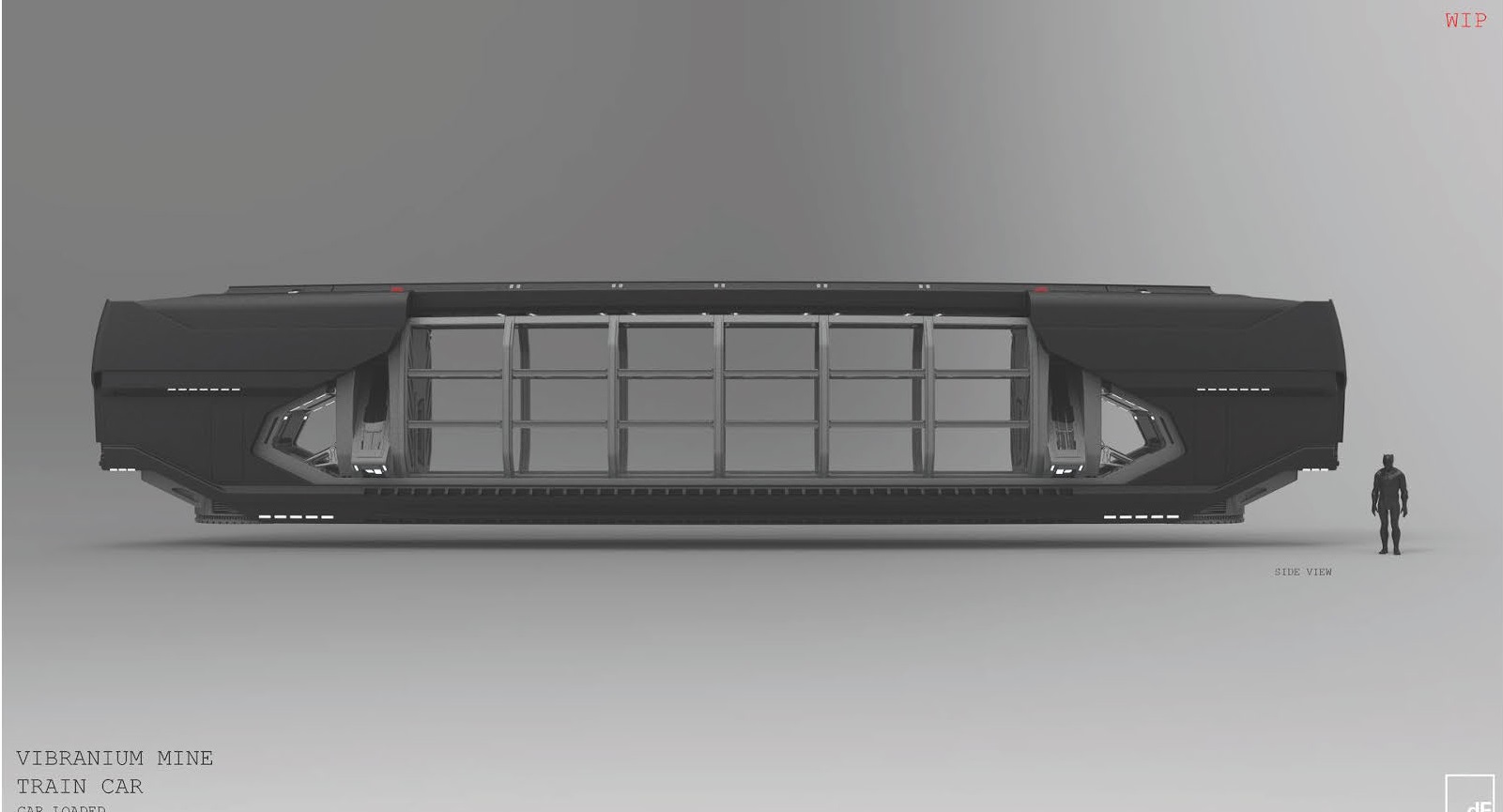 “I think with us both being film majors, it is really neat to just know tho people of that scale are looking at our work,” Goyette continued. “You have Neil Patrick Harris, an actor and full-on theme park enthusiast who is super-dedicated and just understands, probably way more than most people, theme parks. Then you also have Mark McDonough, who is the president of a company who has made some incredible attractions. To just have your work in front of those people, it is a great way to get a foot in the door and just have some validation that your creative work is valuable in a way. It definitely adds value to it, which normally you wouldn’t get if you do not have this opportunity.”

No matter how the final results pan out, both Joseph and Goyette are excited for the opportunity and proud of their work. I asked them how quickly they would be adding something to their LinkedIn pages or Creative Portfolios if Neil Patrick Harris said something positive about Black Panther: Vibranium Heist.

“However long it takes me to write it,” Goyette said quickly, with a laugh.