The next installment of our “20 in 2020” series takes us to SeaWorld Orlando to talk about the steel floorless coaster, Kraken, a personal favorite of mine! 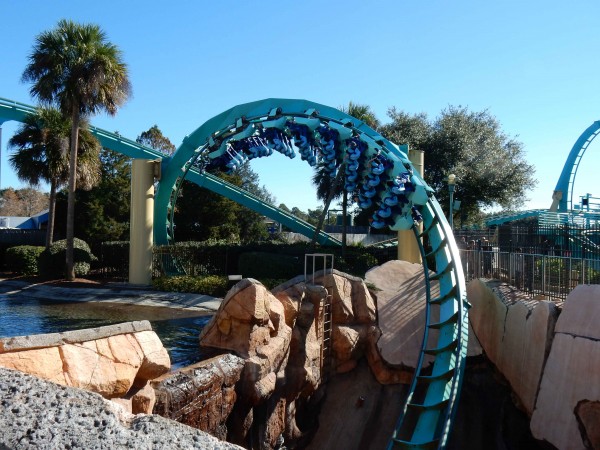 Kraken is a steel floorless coaster manufactured by Bolliger & Mabillard. The ride debuted at SeaWorld Orlando with a soft opening on May 27, 2000, with its grand opening following on June 1, 2000. Kraken stands at 153 ft tall, with a length of 4,177 ft, and reaches speeds of up to 65 mph. The ride has a total of seven inversions. In typical B&M fashion, the ride runs 3 trains with 8 rows, seating 4 people across each row for a total of 32 riders per car.

Kraken is themed after the massive, mythological beast that it shares its name with. Below is the ride description on SeaWorld Orlando’s website:

Born from tales that struck terror in sailors for centuries, SeaWorld Orlando’s mighty Kraken is a monster coaster like no other. 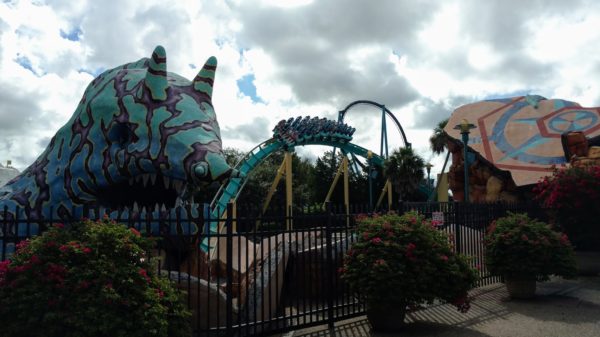 Riders come face-to-face with the Kraken as they approach the ride entrance. SeaWorld’s version of the mythological creature is a giant eel, painted to match the turquoise ride tracks and turquoise and dark blue trains. The giant Kraken next to a drop underneath the walkway presents one of the more picturesque roller coaster scenes. I believe the original queue was themed after a ship, with tales of the Kraken placed throughout. The line queue theming has since been changed. The post-ride queue also had a path that led you into a cave to view the “eggs” of the Kraken, which were basically giant balls of water with eels inside of them. The eels have since been removed although the empty “eggs” remain.

The ride begins with a turn out of the station onto the 153-ft lift hill next to a lake. After the signature B&M pre-drop, the ride turns slightly right into a straight 144-ft drop. Unlike the swooping first drops of most B&M looping coasters, Kraken’s straight drop after the pre-drop let’s you feel every bit of the first drop. Sitting in the back row even gives you a bit of airtime on the drop.

The first half of Kraken is almost identical to Kumba at Busch Gardens Tampa. After the first drop is a 128-ft tall vertical loop, followed by a dive loop that takes you close to Mako’s lift hill. Next is a perfectly executed zero-g roll, followed by a cobra roll and a spiral up to the mid-course brake. At this point Kraken diverges from Kumba’s layout, beginning with a dive to the left into a trench and up into a second vertical loop. Following a dive back into the trench is a gentle hill towards the entrance. This gives riders a brief chance to wave at onlookers before the ride dives back down into a mist-filled tunnel, befitting of the ride’s giant eel theme. The ride twists through the tunnel and up into a final corkscrew before returning to the station.

Kraken’s layout shares many similarities with fellow Central Florida B&M coasters Kumba and Montu at Busch Gardens Tampa. However, each ride is still able to stand out from the others, with Kumba’s interlocking corkscrew and helix through a tunnel, Montu’s batwing element and trench run, and Kraken’s subterranean dives. 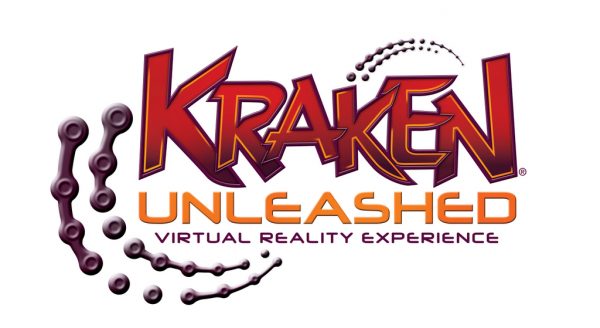 In 2016, SeaWorld announced that virtual reality would be added to Kraken, with the ride being renamed Kraken Unleashed. Kraken Unleashed opened the following year on June 16, 2017. The theme of the ride was changed to an undersea exploration submarine base. The VR experience had riders exploring an underwater volcano before being sucked into a deep-sea chasm and encountering all sorts of deep-sea creatures before coming face-to-face with the Kraken herself. This version of the Kraken was based on a giant squid.

However, the VR experience itself received mixed reviews. Riders had to individually adjust the headsets, with ride attendants then having to calibrate the visuals. After the ride, ride attendants had to wipe down each headset before the next riders boarded. This led to excessive wait times, with what usually was a 5 to 15-minute wait stretching out to nearly an hour. Eventually in 2018, the virtual reality was removed and the ride was changed back to Kraken. 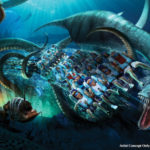 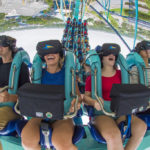 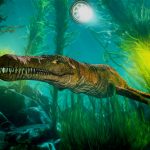 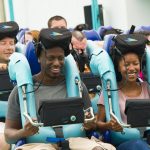 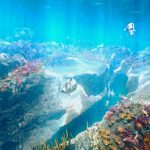 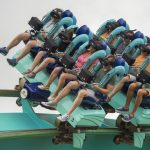 Kraken is still running at SeaWorld Orlando, later joined by the B&M flying coaster Manta, B&M hyper coaster Mako, and Zierer family coaster Shamu Express, which later became Super Grover’s Box Car Derby. In 2020, the Premier Rides coaster Ice Breaker is set to open at the park. The addition of Kraken helped the park go from being primarily a marine park centered around shows to being a world-class thrill ride destination.

Have you ridden Kraken? Did you get a chance to experience the virtual reality when it was Kraken Unleashed? Feel free to add your thoughts! Also, for more information about SeaWorld Orlando, please be sure to visit their website and follow them on Facebook, Instagram, and Twitter.