How Every Modern Wooden Roller Coaster Traces Back to One Company

For the last 20 or so years, there have been two primary wooden roller coaster maker: Great Coasters International and the Gravity Group. Custom Coasters International dominated the wooden coaster market in the 1990s. Before CCI, names like Dinn and Summers were the biggest wooden coaster players. And when you go back to the earliest days of the coaster renaissance in the 1970s, you get to the Philadelphia Toboggan Company, whose own history goes all the way back to the very beginning of roller coasters in the early 20th century.

If you’re a roller coaster fan, you’ve probably heard of most of those names. But amazingly, all of these coaster companies relate to each other. There are designers and engineers or projects they worked on together that link every one of them to every other one. Basically, every major wooden roller coaster of the last 50 years is connected. Here’s how: 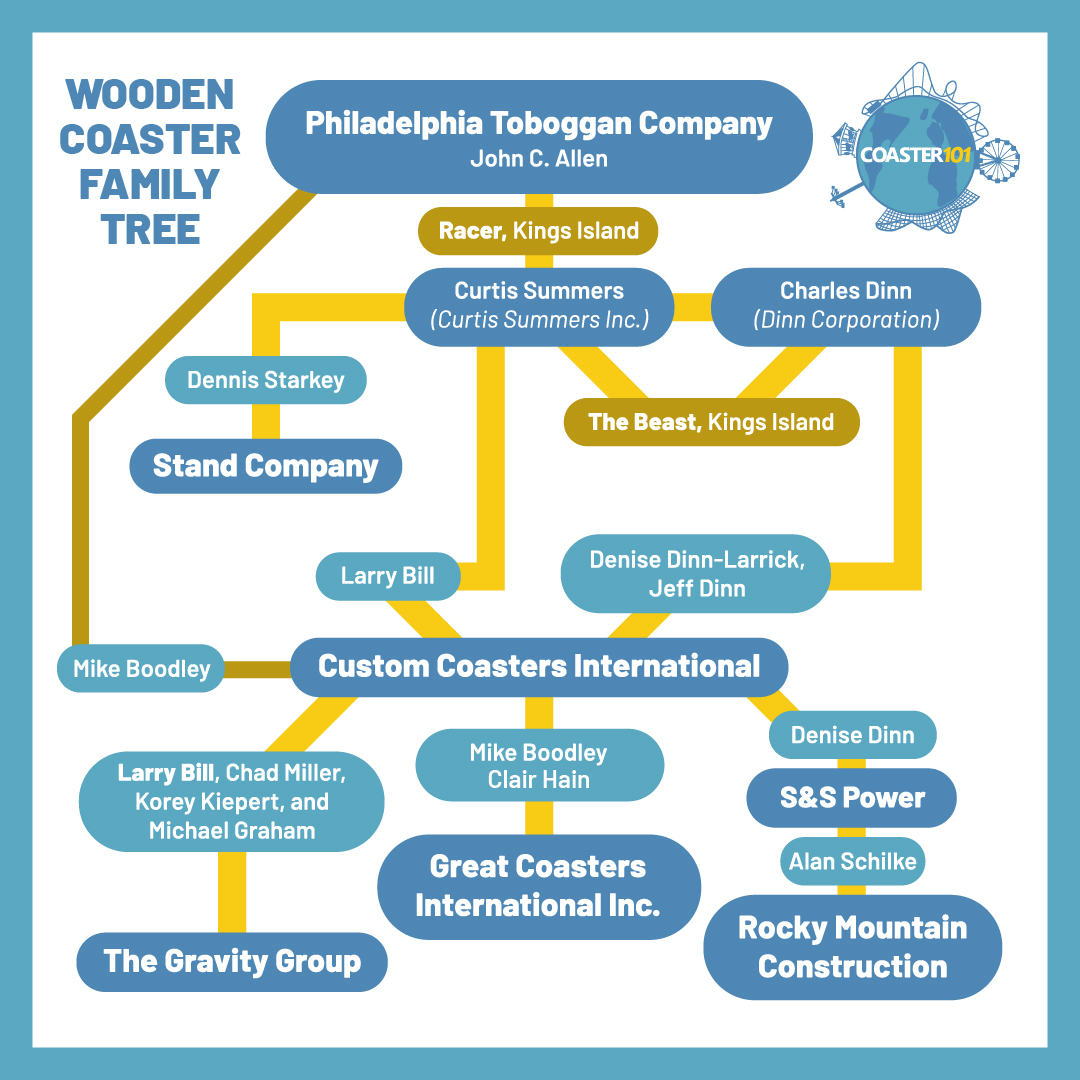 The Philadelphia Toboggan Company dates all the way back to 1904. One of the earliest roller coaster manufacturers, they built many of the most historic coasters in the world during the Golden Age of Coasters in the 1920s and 30s. Thunderhawk at Dorney Park, Yankee Cannonball at Canobie Lake, and Wildcat at Lake Compounce all still operate today.

In 1934 a man named John C. Allen started working for the company, and in 1954 he became its President. He’s the first important piece of our family tree. 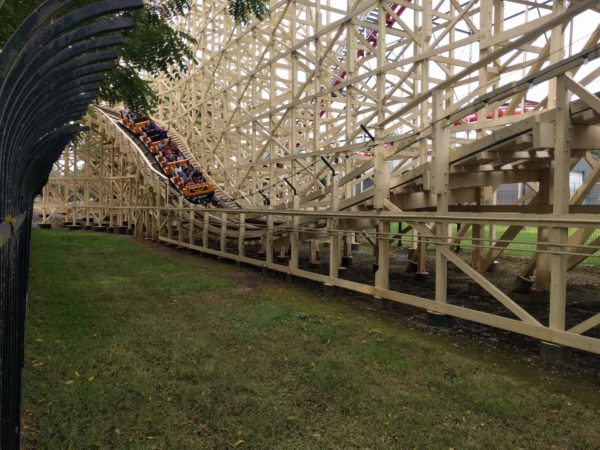 The Philadelphia Toboggan Company was one of the first ever roller coaster firms, building rides during the coaster Golden Age like Thunerhawk, still running at Dorney Park today.

Allen took over in a tough time for roller coasters. The Great Depression and WW2 ended the Golden Age of coasters, and with the industry at a low he retired from PTC in 1968. Meanwhile, planning was underway for a new amusement park near Cincinnati to replace the often flooded Cincinnati Coney Island. It would be called King’s Island.

The story of Kings Island is a much longer one, but the important part for us is that the operators of the parks convinced Allen to come out of retirement to help them build a new roller coaster for Kings Island. That project turned out to be Racer. Assisting Allen with engineering work on the project would be a man named Curtis D. Summers, and his engineering firm Curtis D. Summers, Inc. The Allen to Summers connection on Racer is the first link in our chain. 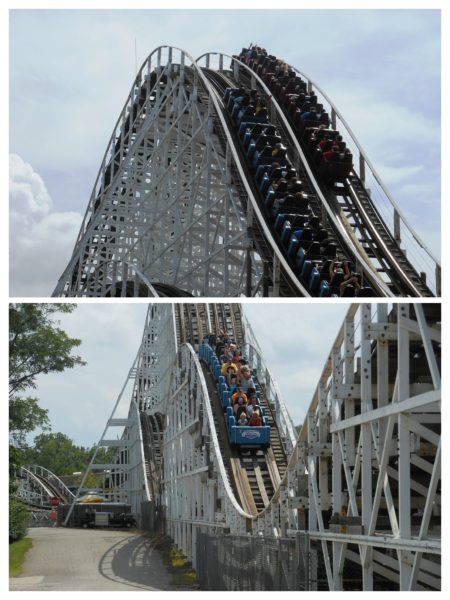 Racer at Kings Island brought together John C Allen and the Kings Island team to start the chain of modern coaster development.

The 80s: Summers and Dinn

A structural engineer, Summers worked with the Kings Island owners back in the Coney Island days, and continued working with them, and John Allen, on several coasters after Racer. This included coasters across a growing park chain, like Thunder Road at Carowinds, The Grizzly at Kings Dominion, and Mighty Canadian Minebuster at Canada’s Wonderland. Probably the most successful of these project was The Beast at Kings Island. 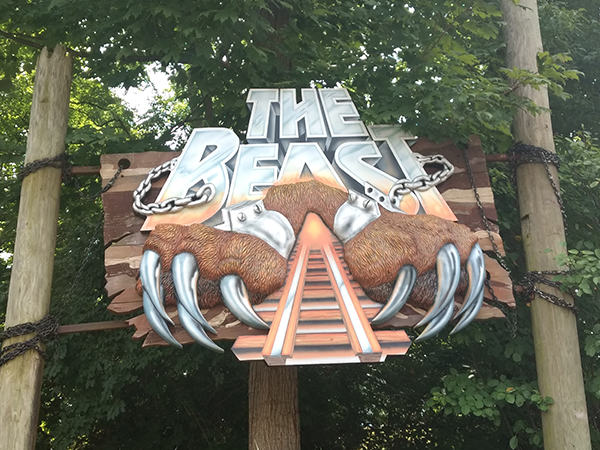 The Beast at Kings Island was another important connection in this web of wooden roller coaster designers, built by the team of Curtis Summer and Charles Dinn.

The Beast was built by an in-house team at the park, with Summers again providing engineering work. This time, the in-house team was headed by a man named Charles Dinn. A few years after the Beast opened in 1979, Dinn left Kings Island to start his own company: Dinn Corporation. The company started with coaster relocation, including Phoenix (formerly Rocket) from Playland Park in Texas to Knoebels. Then, in 1987, Dinn started building their own coasters, again working with Curtis Summers. These coasters became known as “Dinn & Summers” coasters, and together they eventually built 11 rides in total. The best known of those 11 was probably Mean Streak, the massive wooden coaster that became Steel Vengeance in 2018. Through the ’80s Dinn and Summers were THE name in wooden roller coasters. 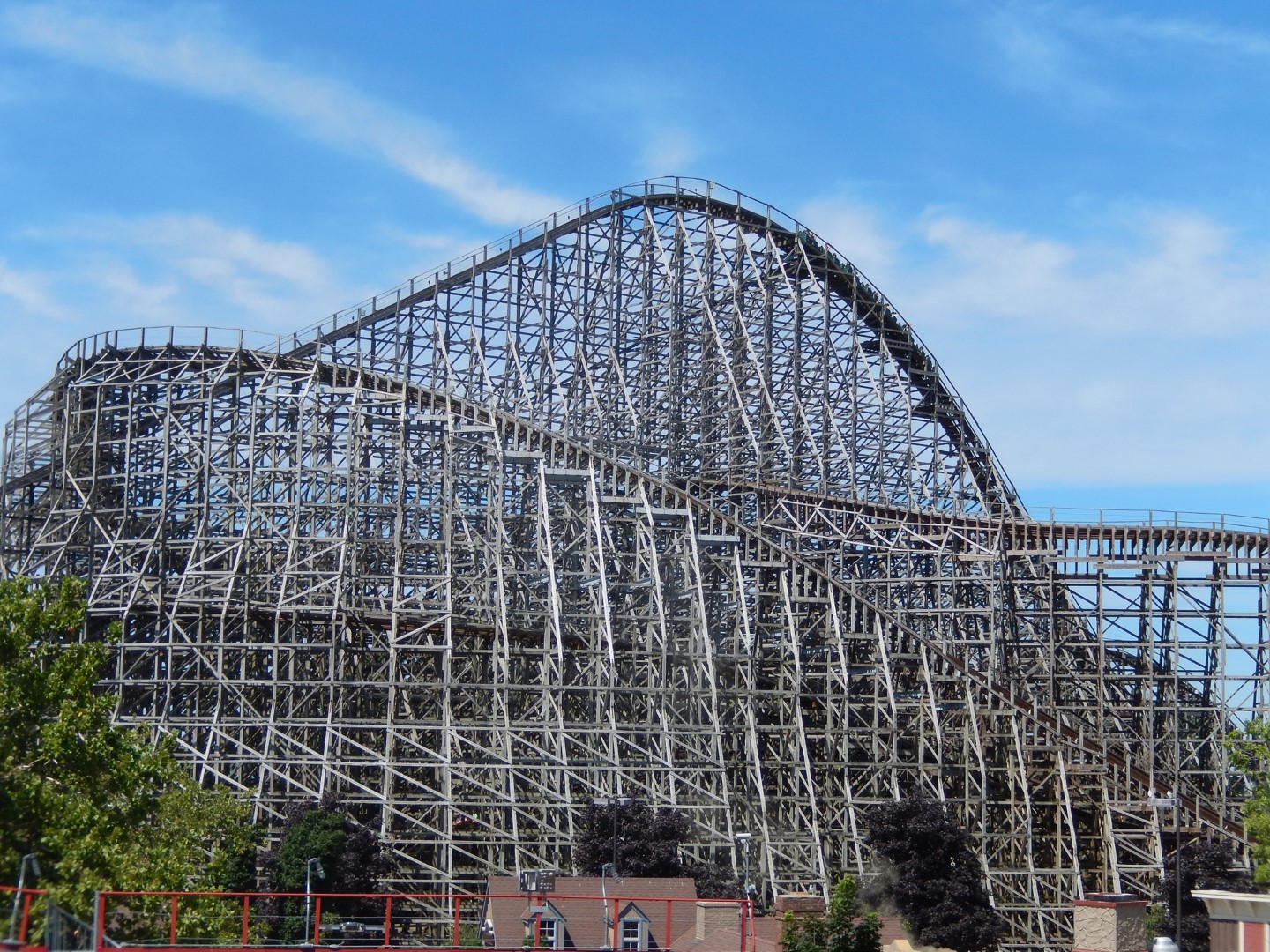 Eventually, in 1991, Charles Dinn retired and closed the Dinn Corporation. Curtis Summers would work on one more project in Japan before passing away at the age of 62.

The 90s: Stand Company and CCI

The next step in the story comes directly from the closures of the Dinn Corporation and the passing of Summers.

First, one of Curtis Summers’ designers, Dennis Starkey, would go on to form his own roller coaster design firm, the Stand Company. Also based in Cincinnati, the Stand Company only built six roller coasters, but a couple of them were pretty impactful. One is Viper at Six Flags Great America, still running today (and running well based on the Coaster101’s experience). They also built the massive White Cyclone in Japan, which received an RMC conversion in to 2019 Hakugei, the second largest RMC coaster. 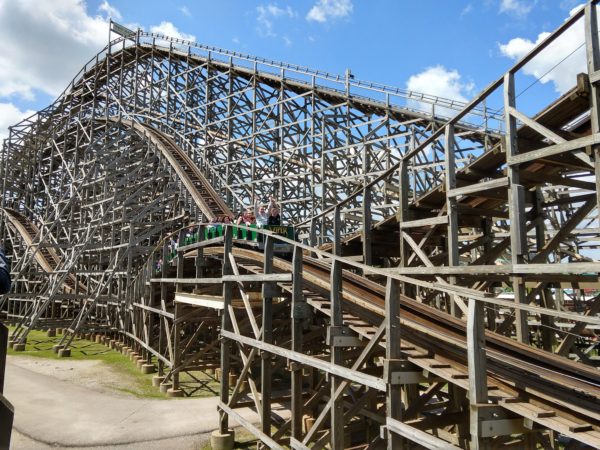 There aren’t many Stand Company out there, but Viper at Six Flags Great America is still operating and running well.

CCI was one the most prolific roller coaster companies ever, building 34 rides over an 11 year span. Rides like Boulder Dash at Lake Compounce, The Legend and The Raven at Holiday World, and GhostRider at Knott’s Berry Farm are often still considered some of the best wooden coasters in the world.

Boulder Dash is one of the best CCI coasters, regularly ranking in the top-5 wooden coasters in the world even 20 years later. (photo courtesy of Lake Compounce)

Sadly, in 2002, CCI came to an end. The company filed for bankruptcy and closed its doors. CCI’s legacy lives on, though, as the main players in wooden roller coaster design today all trace their lineage back here.

The 2000s to Today: Gravity Group and GCI

Years before CCI closed down, one of their first contract designers  — Mike Boodley — along with a CCI construction foreman — Clair Hain Jr — formed their own company. In 1994, Boodley and Hain founded Great Coasters International, Inc. They built their first roller coaster in 1996: Wildcat at Hersheypark. In total GCI has built 29 coasters around the world, including the first new coaster of 2020, Texas Stingray. They’ve also become the premier firm for refurbishing wooden coasters, such as recent work on beloved CCI rides like GhostRider and Shivering Timbers at Michigan’s Adventure. Now over 25 years old, GCI is still going strong today. Adding even more connections to the web, Boodley actually got his start back with PTC, and Hain worked on several of the later Dinn projects!

For a much more detailed dive into GCI’s history, Amusement Today wrote an excellent piece for their 25th anniversary last year. 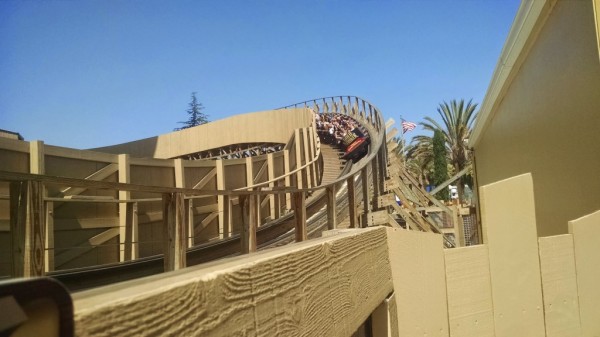 CCI led to GCI which led to Gold Striker at California’s Great America, one of my favorite wooden coasters.

The other major wooden coaster company out there today also came out of CCI. When Custom Coasters shut down, their engineering team stayed together and formed The Gravity Group. This group included Larry Bill — the designer who had originally worked under Curtis Summers — along with Chad Miller, Korey Kiepert, and Michael Graham. Since their founding in 2002, The Gravity Group has built 26 coasters with two more currently under construction (one set to open this year in Austrialia). Their designs have run the range from family rides like Kentucky Flyer to crazy inverting wooden coasters like Mine Blower. Gravity Group continues building awesome coasters and innovating the world of wooden roller coasters today! 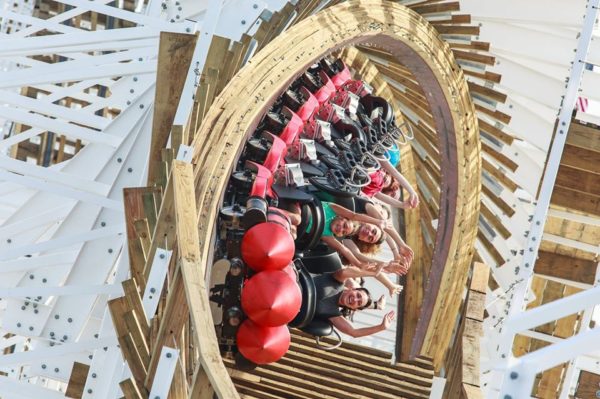 Mine Blower at Fun Spot America shows off the modern innovations of The Gravity Group, a direct descendant of CCI. 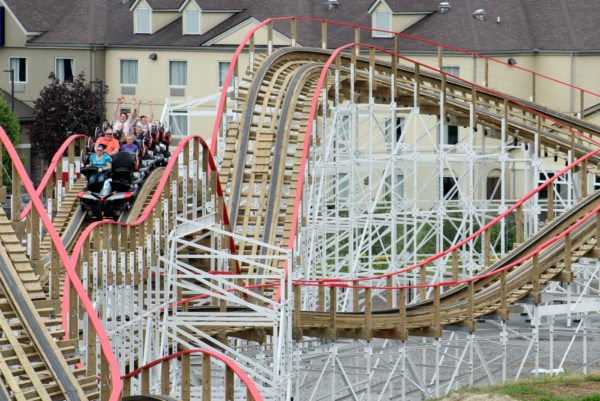 The Gravity Group also makes some of the best modern family wooden coasters, like Kentucky Flyer at Kentucky Kingdom.

Finally, there’s one more important wooden roller coaster link. After CCI closed, ride company S&S Power brought in CCI founder Denise Dinn to create a wooden coaster division for them. They only ended up making four wooden coasters, but one of the engineers working under Dinn made a pretty big name for himself. Alan Schilke worked on three of those S&S wooden coasters before designing some of the best wood and hybrid coasters in the world as part of Rocky Mountain Construction. 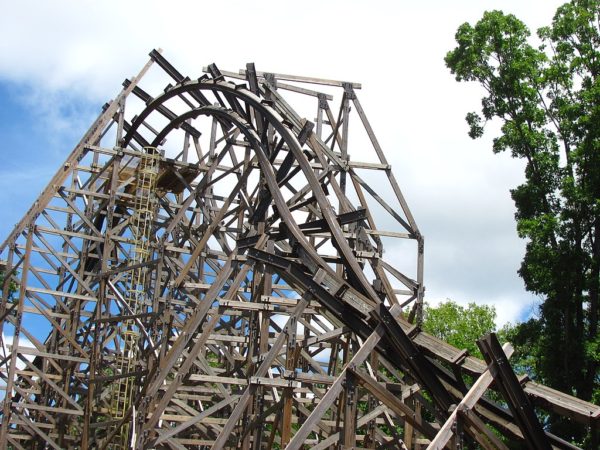 So there you have it. From the most modern wooden coasters all the way back to the originals, a chain of designers, engineers, and projects connects them all. We also have to give full credit to a commenter who drew this topic to our attention back on our Geague Lake history post last fall. Thanks for the suggestion, Jeremy!

Now the toughest question, which of these coaster manufacturers is your favorite? Let us know in the comments, or hit us up on Twitter, Facebook, or Instagram (and give us a follow if you haven’t already)!