Eight MORE Animated Amusement Parks We Wish We Could Visit

A few weeks back, we posted a list of eight animated amusement parks we wish we could visit. With the current global situation the way it is, parks like Spongebob’s Glove World or Tiny Toon Adventures’ HappyWorld Land  were the closest we could get to an amusement park experience after watching all of the official POV videos and scrolling through old photos on Instagram.

Once we posted the original article, we realized that we left off some fan favorites. So many in fact, that it necessitated an entire “Part 2” of animated amusement parks we wish we could visit. While some of the parks are loosely-based on the “real” parks we know and love, we’ll never be able to visit these parks in person, even though we really want to. 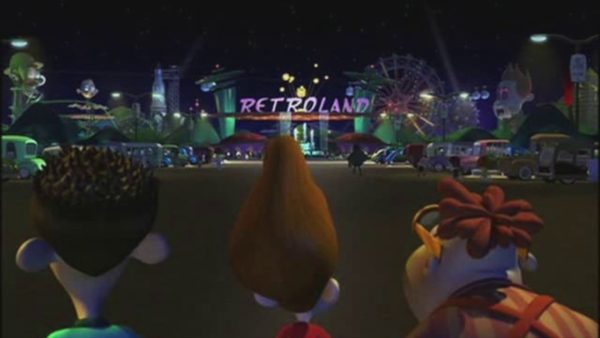 The hometown theme park of Jimmy Neutron, Retroland, is one of the most developed theme parks in any animated universe. According to the Jimmy Neutron fandom wiki, Retroland features 49 rides and attractions, including multiple roller coasters. including Fire Drill, Illusion Grasp, Graveyard Paralysis, Thunderstorm Fusion, Show Me The Mummy, and the Bat Outta Heck. 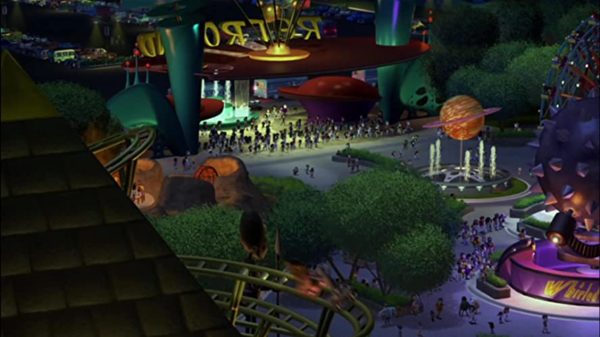 Retroland appears not only in the film, Jimmy Neutron: Boy Genius, but served as a setting throughout the television series as well. Outside of roller coasters, the park featured rides including the spinning “Octopuke,” the “Eye in the Sky” skyway ride, a Petting Zoo, and the Vomatorium, which the Boy Genius was not tall enough to ride.

Check out Retroland Below!

Appears In: The Simpsons (Multiple Episodes) 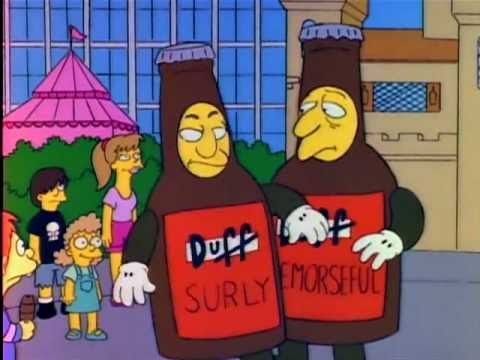 A theme park themed around a beer brand? It seems like The Simpsons’ Duff Gardens would be a direct parody of Busch Gardens theme parks. However, like many parks depicted in the animated world, it’s a play on a Disney Park. There are a handful of attractions, including the Beeramid, the Beer Hall of Presidents, the Washing Machine, and the to-be finished Whiplash Roller Coaster.

However, Duff Gardens’ signature attraction is the “Little Land of Duff,” which is Duff Gardens’ answer to “it’s a small world” at Disney Parks – complete with a long line, children of the world and a theme song that is certain to get stuck in your head. 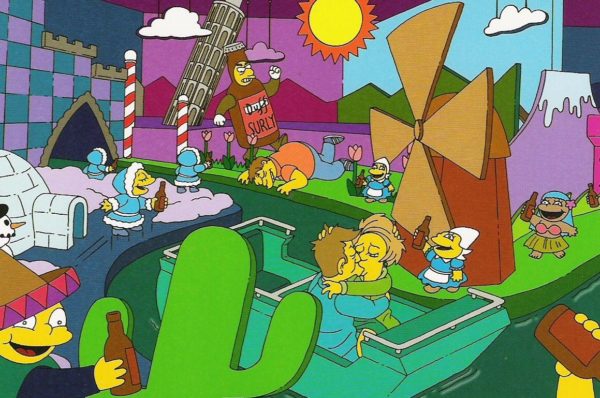 Take a look at Duff Gardens from the Simpson’s Episode, Selma’s Choice.

Appears In: The Simpsons (Season 6, Episode 4) 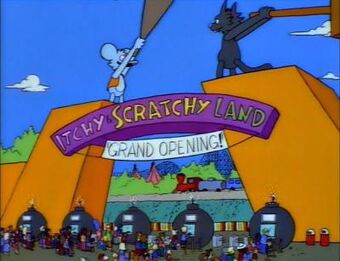 While rides like the Head Basher, Blood Bath, Mangler, and Nurse’s Station were not operational during the Simpsons’ visit, the family did get to ride on the Log Ride…

…and experience the Roger Myers story, complete with the background of a version of Fantasia, known as Scratchtasia.

Love the inclusion of Luna Park from #Futurama!

Sad to see no mention of Tesla Park from Disney’s The Weekenders. The Slides of March, Great Thoughts from Mr. Tesla, and they had a day when everything (food, rides, games, etc.) cost a nickel! pic.twitter.com/XLxFswdP52

A Disney cartoon that many people have minimal recollection of is “The Weekenders,” which appeared on ABC’s “One Saturday Morning” from 2000-2004. Known more for their creative pizza restaurants, the Weekenders also had their own theme park – Tesla Park. The park was themed more to Nikola Tesla rather than Elon Musk’s automotive company, and featured “Great Thoughts from Mr. Tesla (a Great Moments with Mr. Lincoln parody,” and “The Slides of March.” 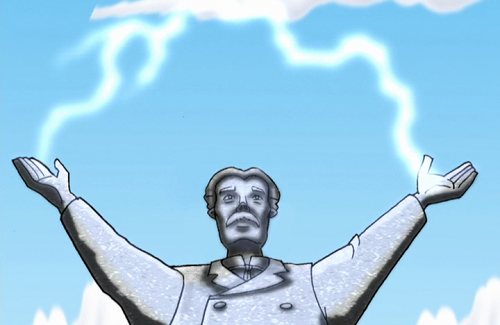 The park appeared in Season 2, Episode 10: Dixon (2). The cartoon is oddly hard to find online (also, not available on Disney+). However, if you want to view Tesla Park in a slowed down version — the link is below. 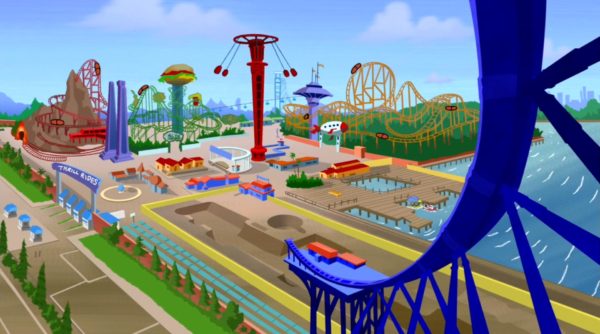 The Haunted Amusement Park is a long-time Scooby Doo trope, so in the new edition of the cartoon, What’s New, Scooby Doo, the gang visits Thrill Ride Park, because Shaggy won free tickets in a “Design-Your-Own Roller Coaster” contest. The park features Indoor Skydiving, and at least three roller coasters: Volcanoc, the Rocket Coaster, and All You Can Hurl.

This episode also hits especially close to home for enthusiasts; featuring a critical theme park vlogger: Harry Harrison from ThisRideStinks.com, and touching on the fact that a majority of roller coaster enthusiasts are men. The full episode is available in the video above! 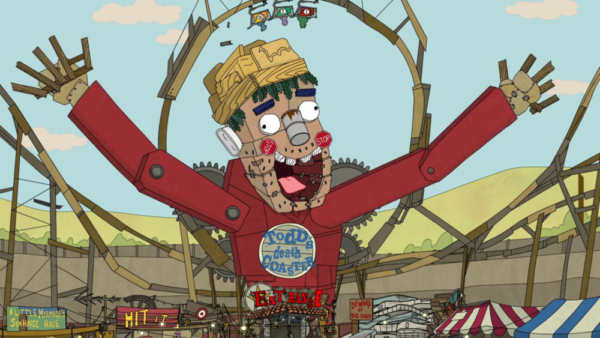 The Disneyland in Bojack Horseman was conceived because Todd was told that it didn’t exist. After 5 years of working with “worker bees,” the park was opened in the Bojack Horseman episode entitled “Yesterdayland.” Disneyland is filled with terrifying attractions including: Todd’s Wild Death Coaster, Hit It, Tyre Fire, Jumping Mattresses and The Grease Fire of the Caribbean. While the “Wild Death Coaster,” looks a bit shoddy, I know there are a bunch of enthusiasts out there who would ride it for the credit. 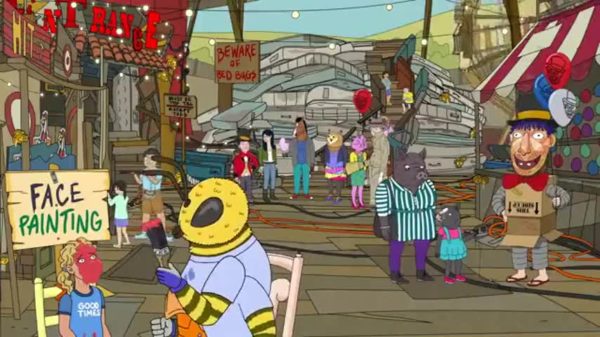 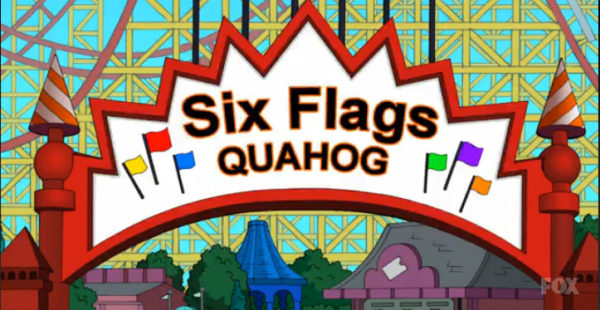 Six Flags Quahog, along with Six Flags Columbus (later mentioned in the same episode) are settings where Peter Griffin attempts to ride a roller coaster, only to be told that he’s too big to fit. At Six Flags Quahog, “The Best Roller Coaster in all of Quahog” is called “League of Extraordinary Gentlemen: The Ride.” Forced topical humor reference aside, Peter is unable to ride the attraction because he doesn’t fit. He instead sets his sights on another Six Flags park, the fictional Six Flags Columbus, to ride their newest coaster. (Which we’re not going to name — it’s in the video below if you want to see it, but keep in mind, we don’t write the jokes.) Donning a girdle, Peter is able to fit on the ride, albeit with negative results.

A quick note from someone else who has been “walked” multiple times for what we’ll call “improper body dimensions,” – if you don’t fit, you don’t fit. Don’t throw a fit to the ride operators, because it’s not their fault! Though not in the same episode, I also want to thank Family Guy for this throwaway joke about how it feels to ride a Larson Super Loop. 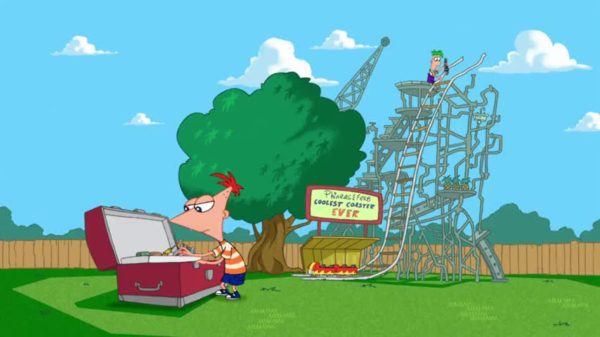 While technically not a park, we didn’t want to leave out Phineas and Ferb’s backyard roller coaster, one that would make backyard coaster designer Paul Gregg jealous. We couldn’t leave it out for one simple reason: Who wouldn’t want to ride around a city on a miles-long roller coaster?! A roller coaster that needs a waiver? That goes through a car wash and has rubber snakes? Croissants?! Sign us up!

What’s your favorite fictional amusement park? Let us know in the comments below!

In case you missed part one: Click here for Eight Animated Amusement Parks We Wish We Could Visit