Disney Springs Set To Reopen May 20

As stated by an official post on their website, Disney Springs, a shopping and dining complex located at Disney World will start its initial phase by reopening certain businesses. While only third-party sub-contracted retailers will be allowed to be reopened, guests can expect the rest of Disney World, including the theme parks and hotels, to remain closed. 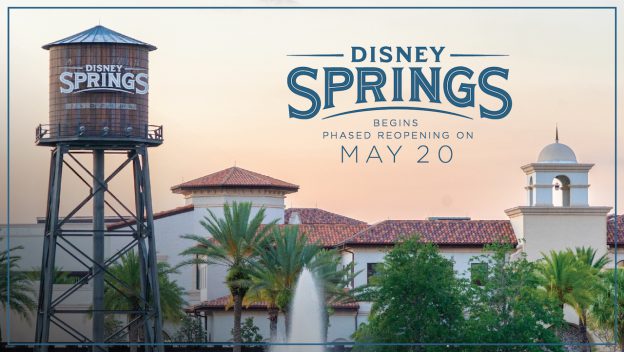 So far, these are the businesses confirmed to reopen. The list will be updated as more information because available.

The next phase will start seven days later when Disney retail shops, such as World of Disney Store, and Disney eateries reopen, the union president said. For that, an additional 59 custodians will report back to work on May 24.

Similarly to a Disney Shanghai, a recent article reported by Coaster101, all guests and employees will be required to wear masks. Guests can also expect to follow social distancing rules and have their temperature checked.

Reported by The Hollywood Reporter, “Disney will provide employees three washable masks. Guests will have their temperature checked, and plexiglass dividers have been installed at registers. Guests will swipe their own payments cards, as they will no longer be handled by employees. And custodians will be retrained to pay attention to high-touch areas.”

Since closing in mid-March, over 100,000 employees have been furloughed. Disney Springs will allow 117 custodians to return to work in the next three days.

The company recently stated, “Disney Springs will begin to reopen in a way that incorporates enhanced safety measures, including increased cleaning procedures, the use of appropriate face coverings by both cast members and guests, limited-contact guest services and additional safety training for cast members.”

For now, there have been no announcements about any part of Disney parks. Walt Disney Co. CEO Bob Chapek on Monday said it was still unclear when the domestic parks would reopen, as the decision would rely on state and local restrictions being lifted.