The next installment of our “20 in 2020” series takes us to South Florida to talk about the now defunct Dania Beach Hurricane, located at Boomers! In Dania Beach, Florida. 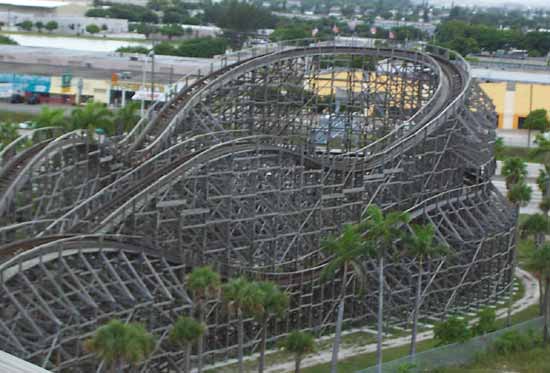 The Dania Beach Hurricane is a double out-and-back wooden coaster manufactured by Coaster Works, Inc. It was one of only two coasters built by the company. It stood at 100 ft tall with a 60 degree max vertical angle, and a track length of 3,200 ft. The ride ran with two PTC trains with 5 cars, each containing 3 rows of 2 seats.

Being from Miami, Dania Beach Hurricane is a coaster I am all too familiar with. However, before I start talking in depth about the Hurricane, I want to set the tone by explaining the experience of being a coaster enthusiast in Miami. For those that don’t know, there are absolutely zero theme parks in the traditional sense. Sure there are a few zoo-based parks such as the Miami Seaquarium, Jungle Island, and Lion Country Safari. But as far as amusement parks with roller coasters and whatnot, most South Floridians look to the major parks in Central Florida.

When it comes to coasters in South Florida, enthusiasts pretty much have two options. There’s the annual Miami-Dade County Youth Fair & Exposition, usually held in March, and Santa’s Enchanted Forest, which is held during the holiday season. Both offer rides of the typical traveling carnival variety, such as the (painful) Windstorm at Santa’s Enchanted Forest, or the Crazy Mouse wild mouse coaster at the Youth Fair.

The best coaster offered in these parks was the Schwarzkopf steel masterpiece, Doppel Looping (known colloquially in South Florida as the Double Looper).

I used to be terrified of the Double Looper growing up, and didn’t even ride it until my late teen years. Going upside down was absolutely out of the question for me. Little did I know that we had such a gem at the Fair during all those years. Unfortunately, the Double Looper stopped operating in 2008.

Anyways, to put all of this into context, coasters were few to come by in South Florida. We basically had to drive up to Disney or Busch Gardens to get our coaster fix.

It wasn’t until Gwazi debuted at Busch Gardens in 1999 that Floridians had access to a wooden coaster at a major theme park. Of course, Gwazi became notorious for being a rough ride. In fact, I think it was the last coaster my parents ever rode. But it was all Floridians knew when it came to woodies. Gwazi became synonymous with the term “wooden coaster”, and the terms rough, painful, and wild were automatically associated with it.

In the following year, the Dania Beach Hurricane opened at Boomers! (formerly known as Grand Prix Race-o-Rama), giving South Florida a wooden coaster of its own. Boomers! was your typical family entertainment center with go karts, miniature golf, a huge arcade, and a few family and thrill rides. The Hurricane would be a separately operated attraction located adjacent to Boomers! and visible right next to Interstate 95. I used to hang out at Boomers! during my teen years in South Florida, but I never recall it being that popular of an attraction. It certainly wasn’t when compared to Florida’s major theme parks, but even Fun Spot America appears to be a much more popular attraction in retrospect. By the time the Hurricane opened, I was already off to college, and wouldn’t experience the ride until a few years later. I finally got the chance to ride the Hurricane when I was home for the summer during college. I didn’t know anyone that had been on the ride, so I was going into my first ride completely in the dark about the ride experience.

After the 100 ft lift hill, the ride makes a wide right turn into the first drop, followed by a double up into a right turn. After completing the turn, the ride swoops into a double down and follows up with a double up, completing the first out-and-back. The ride then banks left and starts the second out-and-back with a swooping drop followed by a quick bank right and up into an airtime hill. A left turn follows and then the ride drops down into a trio of bunny hills before turning left into the last brake run and station.

I only got to ride the Hurricane a few times, but from what I can remember, the ride offered a surprising amount of airtime. I definitely remember the first double up surprising me by lifting me out of my seat. Also, the ride was incredibly smooth, especially when compared to Gwazi. I remember getting off the ride immediately wanting to ride it again. I wasn’t alone in my thoughts. Most reviews and ratings of the Hurricane were favorable, and it was consistently ranked as one of the better wooden coasters in the country.

Unfortunately, the Hurricane ceased operation in 2011, most likely due to low ridership and the cost of maintenance. Four years later, Boomers! was closed and demolished for the construction of a multi-purpose shopping plaza, in typical South Florida fashion. Older South Florida folks can remember the same thing happening to Six Flags Atlantis right around the corner.

The Hurricane did pave the way for other successful wooden coasters in Florida such as White Lightning and Mine Blower at Fun Spot America in Orlando and Kissimmee, respectively. It also opened my eyes in realizing that wooden coasters could actually be fun!

Did you ever get the chance to ride the Dania Beach Hurricane? Are there any other coasters at small family parks that you are fond of? Feel free to add your thoughts!