Yesterday, updates were posted from all parks across the Cedar Fair Chain in regards to the 2020 operating season. While no future park opening dates were announced, the parks all provided updates on the status of multiple 2020 events and some on-going construction projects.

When it is deemed safe for parks in the chain to open,  they’ll all be operating with compressed versions of their planned schedules, along with the likelihood of reduced park capacities. It makes a ton of sense to hold off on these events until more park guests are able to experience them.

Here’s a quick run down of what’s happening, what’s postponed, and other notes from each Cedar Fair park. 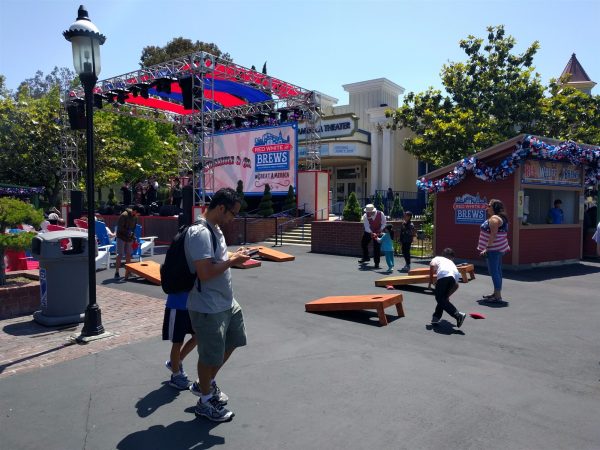 At California’s Great America, the popular “” festival will be postponed until 2021. Monster Jam Thunder Alley will not be taking place at the park in 2020. No information was included in the update about construction of South Bay Shores. 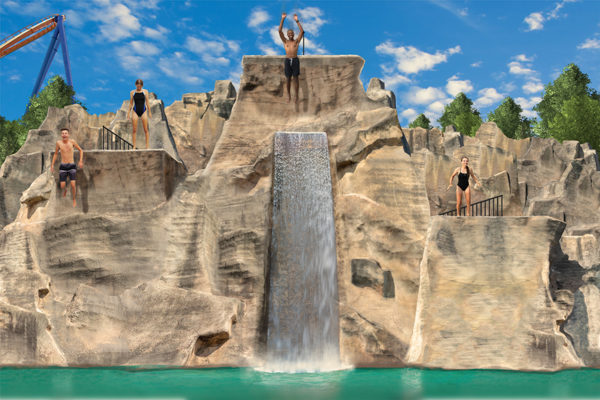 While temporarily paused due to COVID-19, Canada’s Wonderland is pleased to share that construction on our the park’s two new attractions, Mountain Bay Cliffs and Beagle Brigade Airfield, is set to resume shortly and should be complete within a month’s time. 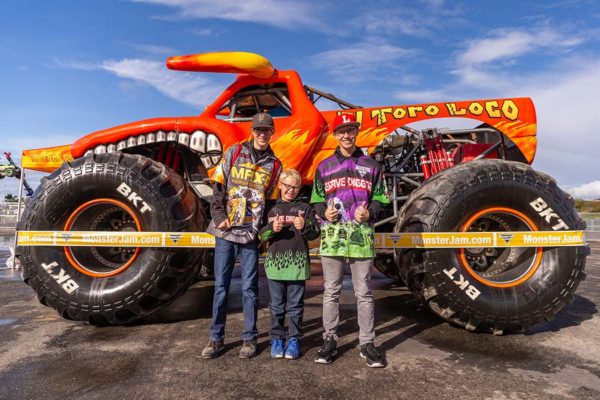 While Monster Jam Thunder Alley will be ready to go when the park opens, the set-to-debut-in-2020 Grand Carnivale and returning nighttime block party Carolina Summer Nights will both be pushed to 2021. Construction on Carowinds’ new-for-2020 mat racing water slide, Boogie Board Racer, is continuing. 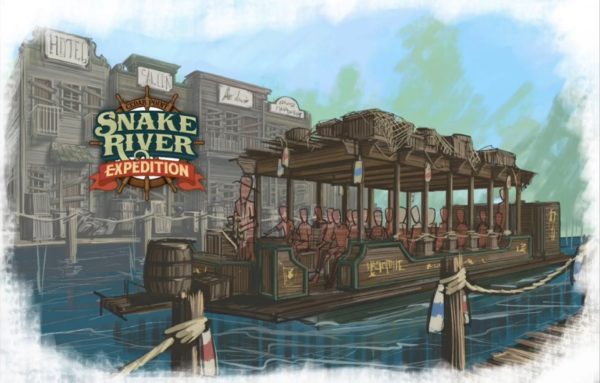 2020 was set to be a huge year for Cedar Point, as it was marked to celebrate the park’s 150th anniversary. The 150th celebration, and everything associated with it, including the Snake River Expedition, Town Hall Museum, and Celebrate 150 Nighttime Parade, will be postponed until 2021. 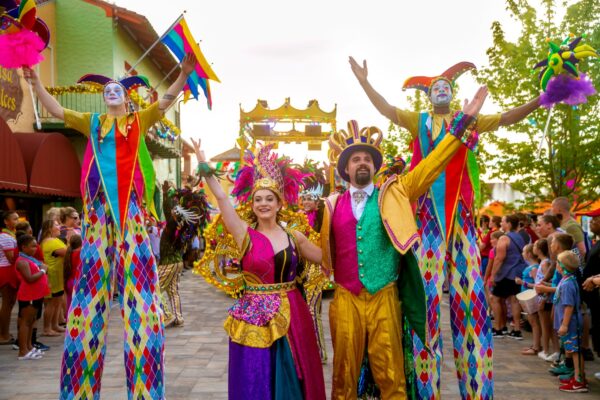 At Dorney Park, construction will soon resume on Seaside Splashworks, a multi-level family play structure in Wildwater Kingdom. The park is remodeling Center Stage and adding more green space. Grand Carnivale and Summer Nights will not take place at Dorney Park this season, and will return in 2021. 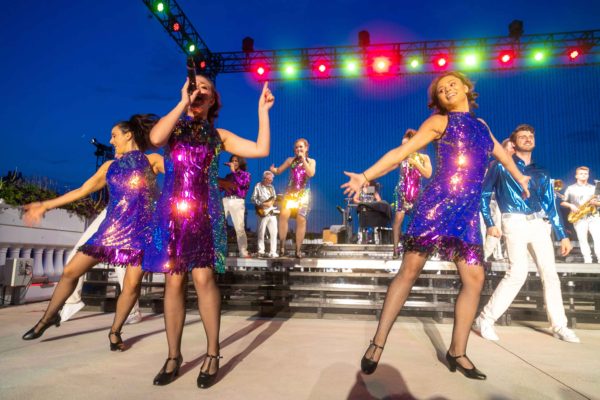 Construction is continuing on Coconut Shores, the re-imagined area for families in Kings Dominion’s in-park water park, Soak City. As far as events at the park, the Run & Ride race event will now take place virtually, and the Memorial Weekend Salute and Grand Carnivale will not be taking place in 2020, with both returning next year.

Orion began testing at the end of February, and the park is looking forward to adding the world’s 7th Giga coaster to their coaster portfolio. As with other parks in the chain, Grand Carnivale and Summer Nights will not be taking place in 2020, and instead will return to Kings Island in 2021.

We reported on Knott’s Beary Tales: Return to the Fair being on track to open when the park reopens. Knott’s 100th Anniversary: A Knott’s Family Reunion and Ghost Town Alive will not be taking place this year and will be postponed until 2021.

However, while a majority of the Knott’s Berry Farm property remains closed, if you’re craving Knott’s Fried Chicken or Boysenberries, you’re in luck. Guests can enjoy select offerings from the California Marketplace including items from Knott’s Chicken-to-Go Restaurant, Farm Bakery and the Knott’s Berry Market. 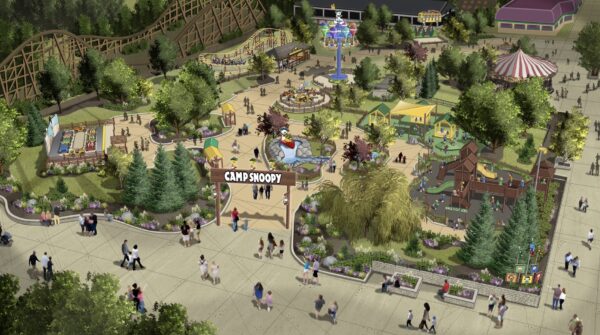 At Michigan’s Adventure, the park’s 2020 addition, Camp Snoopy, was not mentioned by name in the park’s latest update. While we don’t want to speculate, let’s hope that no news means good news for the new children’s area. 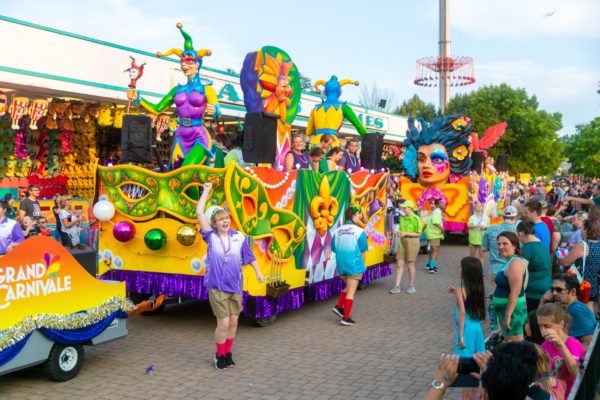 Like at California’s Great America, the Monster Trucks of Monster Jam Thunder Alley will not be revving their engines at Valleyfair in 2020. Both the popular Peanuts Celebration and set-to-debut in 2020 Grand Carnivale will not be taking place this season, and instead will take place in 2021.

Valleyfair is continuing to update and enhance the park with a new event space, a larger and more efficient Coca-Cola Refresh station near the front gate, and a new Corn Cart building where guests can watch corn roasting and popping through giant glass windows. The park included a construction update as well.

Construction continues on Riptide Raceway, which will become the world’s longest mat racing slide when it opens at Worlds of Fun later this year. Both “Summer Nights” and Grand Carnivale will resume at Worlds of Fun in 2021. 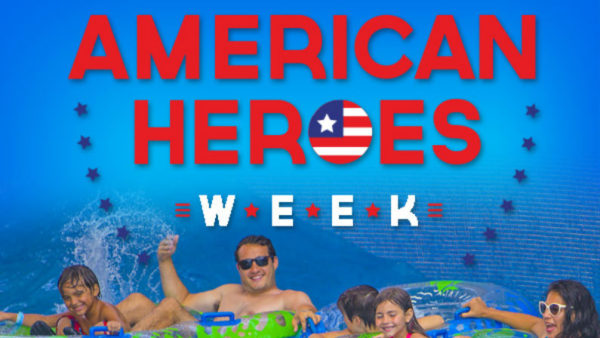 The newest Cedar Fair acquisition, Schlitterbahn Water Parks in New Braunfels and Galveston, have announced the postponement of their “American Heroes” week events.

Both parks are continuing to invest in and update popular areas throughout each park, including fresh new looks for Blastenhoff, Hans Hideout and Surfenburg’s Kiddie Coast; revamping food and beverage locations; remodeling and renovating our front entrance for safer and more streamlined entry into the parks; and updating restrooms at various locations. Schlitterbahn will also feature new outdoor furniture and shade structures, which are being added for enhanced “chill out” areas

As a reminder, all Cedar Fair season passes purchased for the 2020 season will be valid for the entirety of 2021 as well. If you’re considering purchasing a season pass, we feel like now is the time to do so.

For more information about your local Cedar Fair park, be sure to click the link in each header to visit the parks’ latest updates and read them in full.