Since all the real theme parks are still closed, I’ve found myself returning to a comforting world of fictional theme parks: RollerCoaster Tycoon. When I used to play, I would typically complete a scenario as quickly as possible and move on to the next. But this time I felt like continuing and building out the park until it was a full amusement park. Here’s a tour of my completed Bumbly Beach Park and I’ll share a few of my RCT tips along the way.

My favorite scenarios in RollerCoaster Tycoon are the ones with some sort of limitation, like space. I love trying to squeeze as many attractions into the smallest space possible. As you can see, my park is very dense.

Parks with pay-per-ride allow you to make money hand over fist. The key is to build high capacity roller coasters where I charge $6-7 per ride. Build rides with on-ride photos and charge $3 for those too. 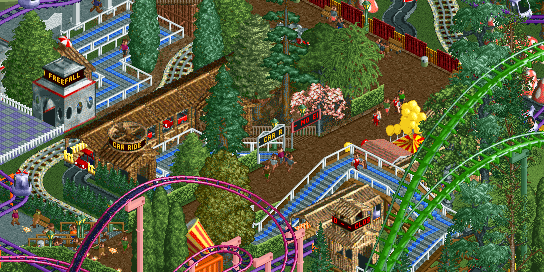 The green Pony Tales steeplechase coaster is the only pre-made roller coaster I added. Its had a full queue since day one due to the low capacity: only 360 guests an hour.

I originally had a long, straight lift hill on the pink Wild Mouse coaster. However, I noticed the lift was the longest block section on the ride. So I divided up the lift hill into two separate chain portions to add an extra block to the circuit and try to make the first block shorter to increase the guest through put. It’s now at 864 guests per hour. The higher the capacity the more money you can make.

Of course, the green hyper coaster destroys the capacity of all the other coasters, running at 3,276 guests per hour thanks to three, thirty-six passenger trains on a five block track. It’s the most realistic coaster here as well, resembling any number of real world out-and-back hyper coasters.

The most challenging coasters to build were the dueling Virginia reel spinning coasters. Originally, I was just going to make one, drawn out ride but I decided to challenge myself and try to squeeze two coasters into the location intended for one. My first attempt was no good: both coasters had an ultra-extreme intensity rating over 12. I had to extend the layout of each in order to burn off some speed in order to lower the intensity to around 9. Lateral gs seem to contribute the most to high intensity ratings so it’s no surprise the gs were too high on a ride where you can’t bank the turns.

In the end, I didn’t have as many dueling elements as I wanted and the layout had to extend outside of my intended footprint but I think the result came out nicely.

I could have built more park out on the beach but I can only build over the land. Where I don’t own the land means I can’t add any theme elements so I decided not to build more rides there. So there you have my Bumbly Beach complete park – I hope you enjoyed this tour of my park!

I play RollerCoaster Tycoon Classic on my phone, but you can get it on PC here.

If you still play RollerCoaster Tycoon let me know what your favorite scenario is in the comments below.

Would you like to see more articles on my RCTC parks?