Eight Animated Amusement Parks We Wish We Could Visit

Right now, if you want to visit a theme park, your options are supremely limited. But after you’ve watched all of the roller coaster POV videos and walked around your favorite parks on Google Maps, there’s not much more you can do in order to scratch the theme park itch.

This got us thinking about fictional theme parks that have been depicted in movies, television shows, and in at least once case, inside of an already existing ride. While some of the parks are loosely-based on the “real” parks we know and love, we’ll never be able to visit these parks in person, even though we really want to. 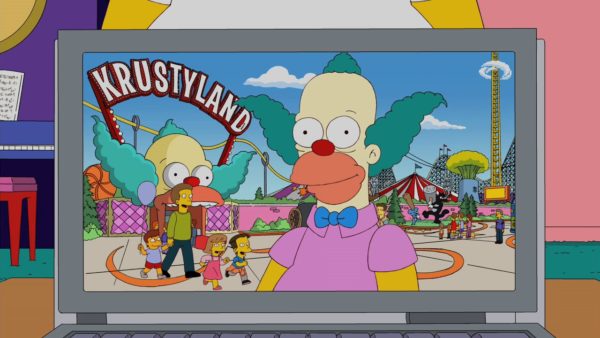 Probably the closest to a “real life” theme park experience that you can get with any park on this list, Krustyland is the fictional theme park in the respective Simpsons attractions at Universal Studios parks on both coasts. Taking elements that loosely mimic Disney Parks, SeaWorld Parks, and even Universal itself, Krustyland (in the ride’s canon) features upwards of 40 unique attractions and locations.

Riders of the Simpsons Ride are probably familiar with the park’s signature to-be-demolished roller coaster, the “Thrilltacular: Upsy-Downsy Spins-Aroundsy Teen-Operated Thrillride.” Other rides to experience in Krustyland include Krusty The Clown’s “Magical Journey Through my Mouth,” the “it’s a small world”-esque “Happy Little Elves in Panda Land,” and Captain Dinosaur’s Pirate Rip-Off.

Check out the full experience of Krustyland in the video below! 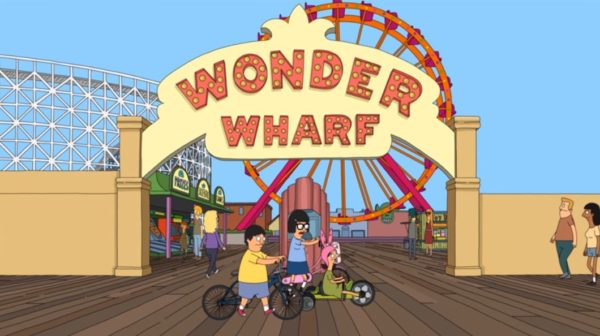 Wonder Wharf, the amusement park in the nameless New Jersey town that is the setting of Bob’s Burgers would make for an park to visit. The pier alone has everything you need in a theme park: fun rides, good food, games, merchandise — you get the idea. It’d be a great place to actually visit. 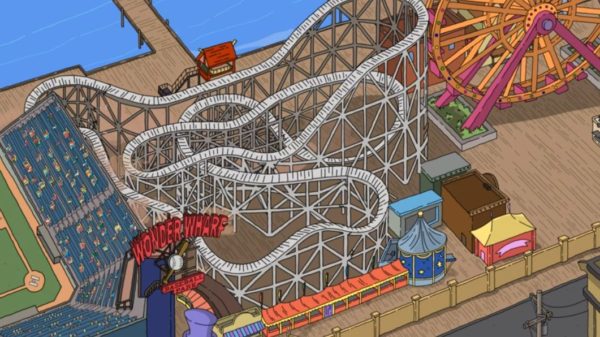 Along with the Scream-i-cane wooden roller coaster, Wonder Wharf also has other classic pier attractions like a Wonder Wheel, Merry-Go-Round, and Tilt-A-Whirl. We wrote an article last year talking about why the world needs a Bob’s Burgers theme park land. 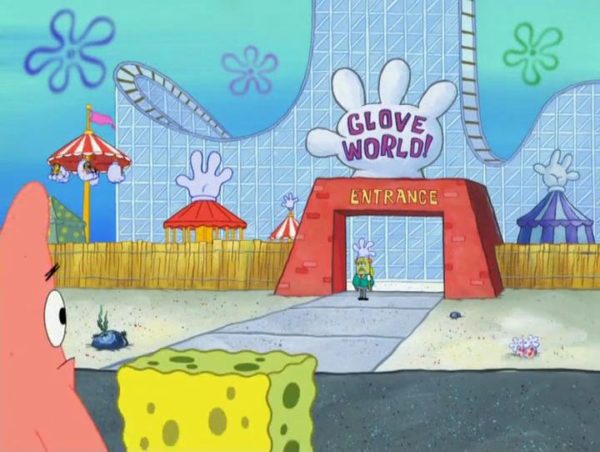 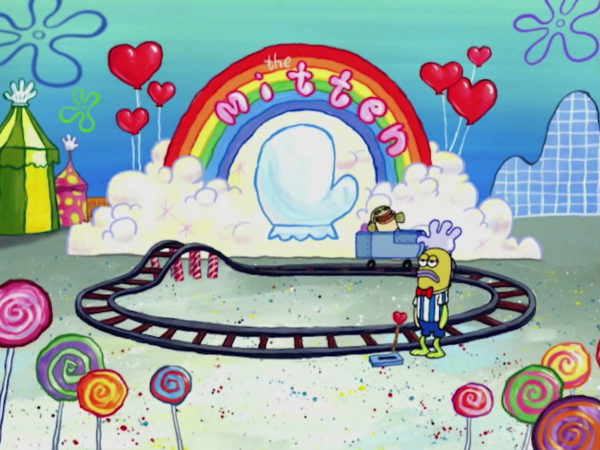 Other attractions include a Ferris Wheel, Merry-Go-Round, Swings, Big Dipper, Glove Drop, Tilt-A-Hurl, and the Tunnel of Glove. And if you’re lucky, you’ll be able to get your photo taken with park mascot Glovey The Glove. 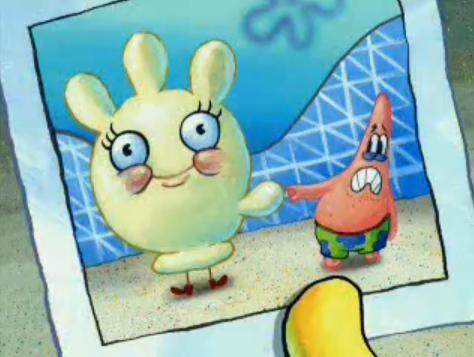 Experience Glove World in the “Roller Cowards” episode of Spongebob Squarepants Below!

Appears In: Tiny Toon Adventures: How I Spent My Vacation (1992) 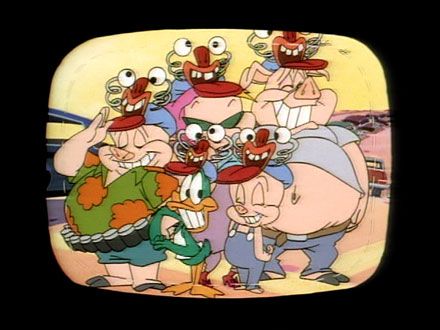 This may be one of the most obscure references on this list, but the theme song for HappyWorldLand has been a semi-constant ear-worm in my life for more than 20 years. In the direct-to-video “Tiny Toon Adventures: How I Spent My Vacation,” Plucky Duck joins Hampton Pig’s family on a trip to HappyWorldLand, in a journey reminiscent of National Lampoon’s Vacation to WalleyWorld

Once Plucky and the Pig family reach HappyWorldLand, it’s quick to figure out which park is being spoofed by the Warner Bros. cartoon. Enormous parking lot. Big castle. Unique looking hats. The park even has a monorail! I don’t want to spoil the video below, but rides like The Legendary Happy-Go-Pukey Ride, Happy Feet, The Gargle, The Happy Crasher, and The Happy Centrifuge weren’t on the to-do list during this visit.

Where the fun doesn’t stop at only 80 bucks a pop, in beautiful HappyWorldLand! 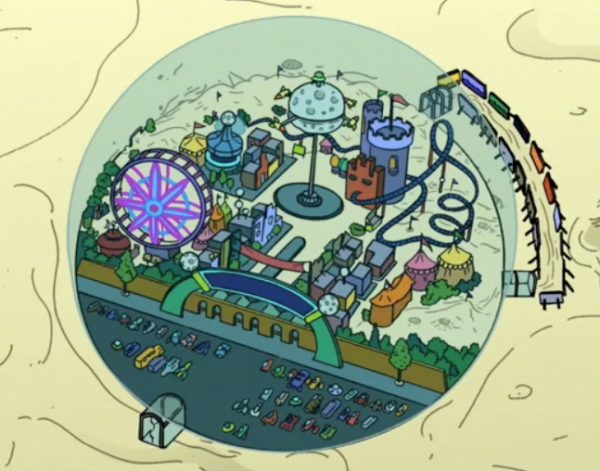 A theme park on the surface of the Moon, “the happiest place orbiting earth” makes multiple appearances in Futurama. Luna park, encapsulated in a biosphere, is designed as a spoof of Disneyland. With attractions like “Whalers on the Moon” (a Pirates of the Caribbean parody) and “Goofy Gopher Revue (presented by Monsanto),” a play on the Country Bear Jamboree, as well as a “Moon Street, U.S.A.,” it’s easy to see why. 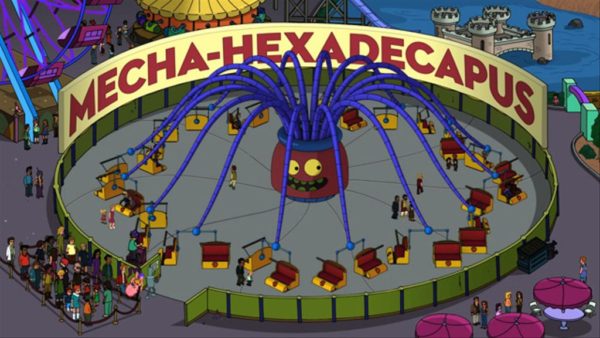 There are also bumper cars, a Lunar Rover ride, the Mecha-Hexadecapus swing ride, and an arcade. The games include Skeeball, Virtual Skeeball, and Virtual Virtual skeeball. 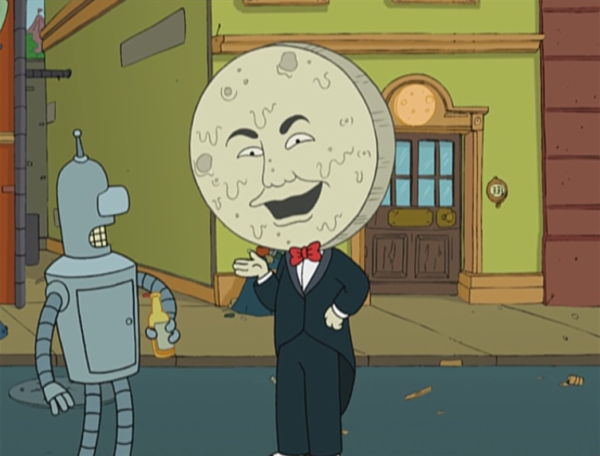 Experience some highlights of Luna Park below! 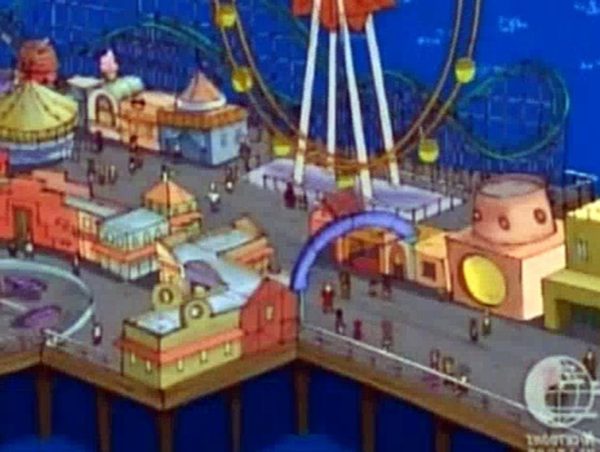 Rocket Power’s setting of Ocean Shores, California is an amalgamation of multiple southern California cities, so it would make sense that the seaside piers would make an appearance as well. Dream Park is loosely based off of Pacific Park at the Santa Monica Pier, and features a Ferris wheel, roller coaster, and multiple midway games.

The main episode that features the amusement park is an episode called “Twister’s Cuz,” where the Rocket Power gang wants to ride the new “Sky Torpedo” ride, which is the latest and greatest. While Sam is terrified of the attraction at first, he actually loves the ride when all is said and done. 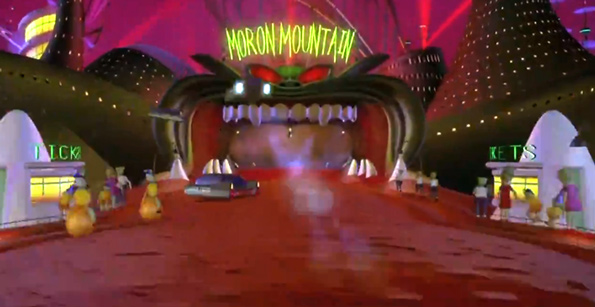 Moron Mountain is quite literally a theme park that’s out of this world. Managed by the villainous Swackhammer, antagonist of the film, Moron Mountain employment was on the line as a bet for the basketball game between the Monstars and Looney Tunes/Michael Jordan. 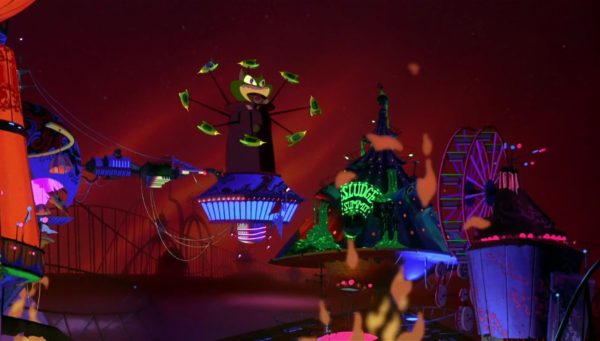 While the premise of the park is that it is generally disliked by its alien guests, the park appears to have some fun amusement park staples – a Ferris wheel, a flume ride called Sludge Summit, and a unique, albeit faulty spinning ride. If you look closely in the background, there’s also a roller coaster, though it isn’t mentioned in the film. Every amusement park enthusiast has visited at least one park that can be described as “All things considered, pretty terrible,” and Moron Mountain would fall under this description. 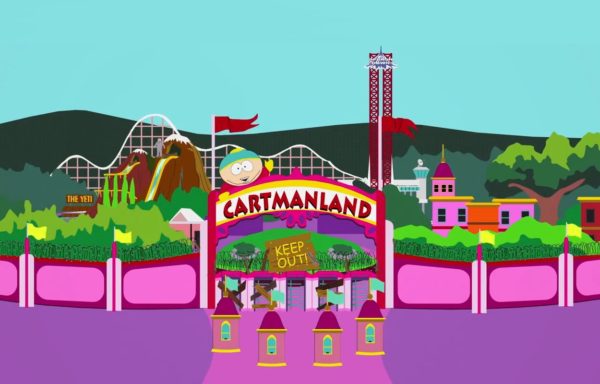 In this episode of South Park, Cartman inherits $1 Million from a dying grandmother, and instead of doing something practical with the money, proceeds to buy the financially failing North Park Fun Land from its owner, Frank Fun. The episode channels the Dr. Seuss classic, How The Grinch Stole Christmas, with Cartman’s disdain for all of the “Lines! Lines! Lines!”

Cartman intends to turn the park and all of its 100 rides  (and six roller coasters!) into his own personal theme park, with no one else allowed in. 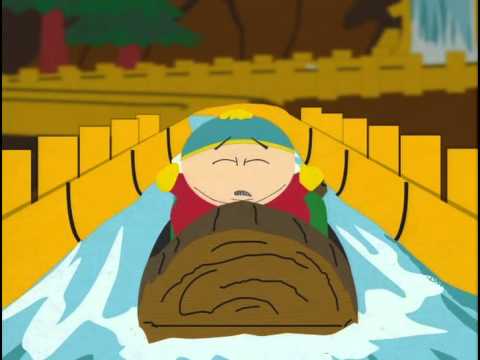 Here’s a video of some of the various attractions at Cartmanland.

Investing the entirety of his inheritance in the park, Cartman has his dreams of his own theme park dashed when he realizes he has to start paying for security and maintenance, and therefore has to let other people in the park to enjoy it.

So much to do at Cartmanland, but you can’t come! (That’s because it doesn’t exist!)

What’s your favorite fictional amusement park? Let us know in the comments below!

Update: We now have a Part Two! Eight MORE Animated Amusement Parks we Wish we Could Visit.