There are multiple modes of transportation to traverse the sprawling 25,000 acres of Walt Disney World’s property: car, monorail, boat, buses, Minnie vans, and now cable cars. The new Skyliner is a gondola lift system by Doppelmayr/Garaventa Group that opened in September 2019. There are five stations on the three separate cable lines connecting six Disney resort hotels with two theme parks and the Boardwalk entertainment area. 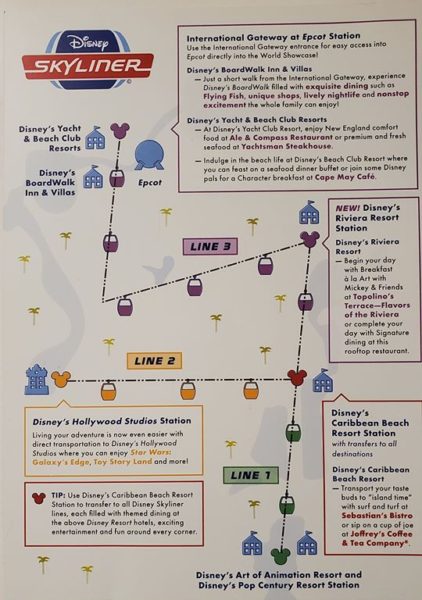 How the Disney Skyliner Works

The main cables are looped between two bullwheels and are almost always moving. The cars use spring loaded grips that allow them to be detached from the moving cable. The cabins come off the cable in the load and unload areas where they appear to be driven by tires at a relatively constant speed. Like on many of the newest Disney theme park attractions, there is a separate load/unload area where the cabins can come to a complete standstill so guests who need extra time can board. As the cabins approach the cable, the driver tires get progressively faster to match the speed of the moving cable.

The engineering behind the system is fascinating, but what makes it so fun to ride? Here’s why the Disney Skyliner is now my favorite mode of transportation at Walt Disney World.

Even though it’s been open almost half a year now, and who knows how many thousands of tourists have already taken flight, the cabins all still look brand new, inside and out. They don’t smell old, moldy, or like sweaty tourists. Can’t say the same for the tired, old monorail trains.

From flying low over Hourglass Lake to getting a peak at Ratatouille construction, the aerial views make the Skyliner really fun to ride. Tip: it’s easier to see the sights if you don’t get one wrapped in a character. If there’s no line, ask the cast member if you can wait for a cabin with no characters. 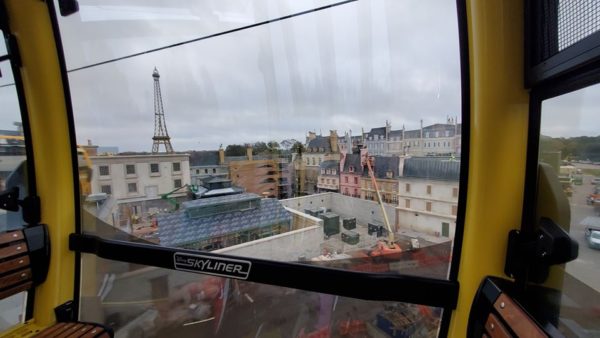 Using the Skyliner, you can make it from Disney’s Hollywood Studios to Epcot in about 18 minutes. The cabins are almost always constantly moving so even if there is a short line it goes fast. And once you’re in the air you don’t have to stop at any traffic lights.

Out of ten or so flights on the Skyliner, maybe only two we had to share the cabin with another person or family. No screaming or crying kids. Huge difference from the buses and monorail where they cram in as many people as possible.

Unlike the buses or monorail where there’s a good chance you could be standing up the entire trip, every member of my family got to sit down for the duration of every trip on the Skyliner, which is a blessing when you’re walking thirteen miles a day.

Although I liked sitting in a cabin that didn’t have a character wrap because it was easier to see, my kids loved looking at the characters on the outside of the other cabins as they passed. You can request the cast member loading the cabins to wait for a specific character if you or your kids want to.

The Skyliner really adds a kinetic energy to the resorts it passes near. It’s mesmerizing just to watch the cabins zip along the cable so silently. 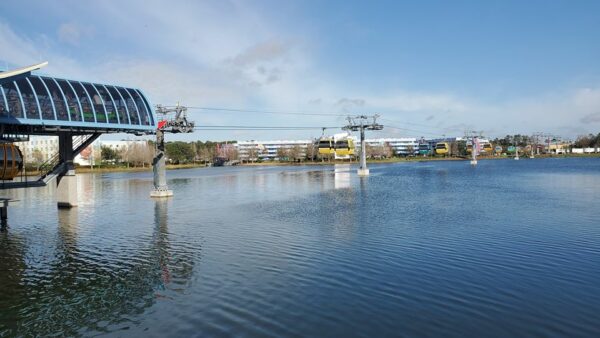 Disadvantages of the Skyliner

Of course, the Skyliner isn’t perfect. We rode on a few days where the high was 88 degrees F. Didn’t have a problem with the temperature inside the cabin. As long as we kept moving there was constant airflow. However, I can see if you get stopped for a prolonged period of time when the temperature is 90 degrees that’s not going to be fun at all. Maybe bring a bottle of water and a battery operated fan just in case.

The cabins can rock and sway side-to-side, so someone prone to motion sickness may have a hard time, especially if the forward movement stops so you’re rocking on a hot day with no airflow.

We never had much of a line to get on, but I can see if you left Epcot after the nighttime show there could be a long wait to get on. If they start loading more than one family into a cabin, you could get stuck with a screaming baby in a really small, confined space.

See the Skyliner in action and take a ride with us from Epcot to Pop Century by watching the video below.

If you’re going to Walt Disney World I highly recommend staying at any hotel with access to the Skyliner.

Have you ridden the Skyliner? If so, what did you think? Have any good or bad experiences? And if it’s not your favorite form of transportation at WDW, then what is?