All Of The Lights: Catching Up with KCL Engineering’s Andy Versluys

If you’ve followed Coaster101 for any portion of time, you know about our fascination with Iowa-based lighting specialists KCL Engineering. Known primarily in the amusement industry for their spectacular lighting packages on roller coasters, KCL has continued to expand their national footprint of roller coaster lighting packages after the success on Monster at Adventureland. 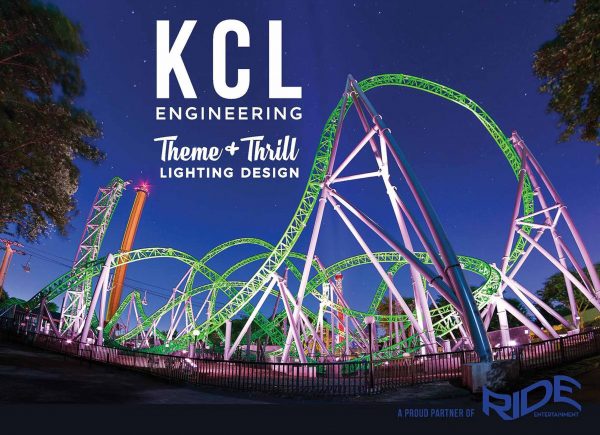 Since we first interviewed KCL’s Andy Versluys at IAAPA in 2017, KCL has had a role in the lighting of Hangtime at Knott’s Berry Farm, Adrenaline Peak at Oak’s Park, and TCMNT Shellraiser at the American Dream. At this year’s IAAPA Expo, we caught back up with Andy to learn a little more about what KCL has been up to in the past few years.

C101: When we talked last, KCL was getting ready to unveil their second coaster lighting project with Hangtime at Knott’s Berry Farm. How was the reception for Hangtime, and has it drawn the interest from parks who would want KCL to light their coasters?

Andy Versluys: Hangtime has a lighting designer on the Knott’s events staff, and when we worked with the installation of Hangtime, I worked to get him hooked into the lighting controller that we installed. Since then, he’s taken over all of the special event programming, for Christmas, 4th of July, and Halloween – it’s written by their staff. Having that element to it has helped us promote the system more. It’s neat that we can provide a product that our users can modify themselves, and create their own special events around.

AV: We’ve had other parks comment on that and mention that they want something like Hangtime in their park for that reason alone.

C101: After the success of lighting Monster, Hangtime, and Adrenaline Peak, what have you learned from these past projects that you were able to implement in the lighting of Shellraiser?

AV: Shellraiser was more complex in that they were going to be running multiple trains at the same time. We wanted to be able to come up with a programming element that was able to utilize that aspect of it, and make it different from our previous lighting packages. On Monster, we debuted the track lighting system with follow effects. On Hangtime, we differentiated ourselves in that we have multiple scenes that play throughout the night, and that has the ability to be overriden by the park to have musical shows play during events.

Shellraiser will have all of that, and be able to do multiple chases at one time. Incorporating the Teenage Mutant Ninja Turtles theme, we ended up coming up with a chase program that alternates the four turtle colors on the track. The first car red, second car blue, third car orange, and fourth car purple, etc. As you’re watching it, you may see a blue trail going by, and then you’ll see the lift hill pulsing Orange, so you know Michelangelo is on the lift hill, and then you might see the launch element go purple. That’s one aspect we upgraded.

Another aspect we’ve improved is including a linear aspect that we’d never used on a coaster before. It’s on the launch section. As you pull into the launch, you can see this bar of light in front of you start rushing towards you, in whatever turtle color your particular chase is at that moment. It’s a little difficult to explain, but as you pull onto the launch section, there aren’t track mounted flood lights like we typically use, there are track mounted linear lights, and those start rushing toward you. As you launch, the floodlights turn on and follow you over the hill.

C101: Were there any differences with an indoor coaster that weren’t present for your outdoor installations?

AV: With Nickelodeon Universe being indoors, it was awesome for us, because you can see the lights all day. They’re not as bright, but you can see them better indoors during the day than at an outdoor park. We are able to pick up more exposure that way. They also have lighting elements throughout the park that we’ve incorporated and plugged our lighting system into the building controls, so that when they do end up having musical events at the park, it’s not going to be just the roller coaster incorporated, there will be speakers, lights, both stationary and moving, that are incorporated into that system as well, so it will be the entire area in sync. It’s more lighting than I’ve ever seen in a controllable network.

Another benefit for us that we didn’t have to get all-weather-rated lighting enclosures for the lights, but on the flip side, it was a little bit more difficult for us to get lift cranes inside to install or adjust lights. Other than that, it was pretty similar.

Skycoaster Lighting Ceremony at the Orlando park. Revealing our new lights on the Skycoaster! pic.twitter.com/15trsLVD06

C101: What are some other attractions KCL has worked on recently?

AV: Well, we’ve done some work on the Fun Spot Orlando SkyCoaster. The 300′ arch has traditionally been lit with HID lamps that needed to be replaced periodically. They were replacing multiple fixtures a year, which is a lot of effort to get a lift up to a 300′ structure. Replacing those fixtures with LED lights is going to be really good for park maintenance, but it also gives the park programability, so we just finished up doing some lighting programs for the park and training so that they will be ready to operate the lighting controls. We’ll be unveiling that tonight (Author’s Note: This was Wednesday of IAAPA Week) and coming back periodically to update those shows as requested.

C101: Will the Skycoaster be similar to your other amusement lighting projects? Will the lights “dance?”

AV: By the time any one reads this, it will have gone live and we’ll have effects traveling up and down the archway, make the arch look like its slowly filling up or fading down. We have multiple colors on at the same time – red, white and blue is what the park requested as its main color scheme for the arch. Tonight, we’ll be running a show that takes that green and flashes and does some rainbows and chases, and settles into the red, white and blue. 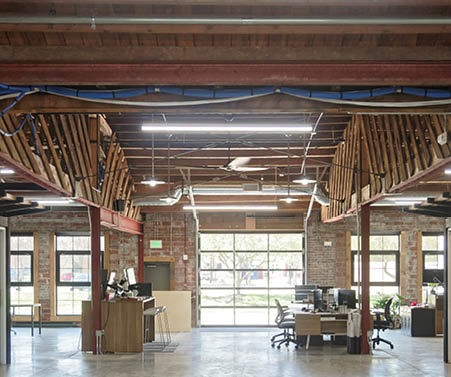 C101: Your office has expanded a lot in the past few years. Can you talk a bit about that?

AV: KCL Engineering is a consulting engineering firm out of Des Moines, IA and we do mechanical, electrical, plumbing and technology design from buildings. What we’ve been talking about today, the specialty lighting, accounts for a pretty small amount of the work that we actually do. My day-to-day work is usually with office buildings or school districts to do designs for classrooms or conference rooms. We’ve recently opened an office in Portland, OR, and one in Phoenix, AZ. Our Portland office has 4 or 5 employees, and Phoenix has just one full-time employee now, but we’re cycling out employees from Iowa to go work down there. We’re slowly building up that staff. I haven’t volunteered to go down to Phoenix, just because I hold a lot of roles at the Iowa office, and I’m a little more valuable there. It’s definitely been busy though.

C101: Your amusement lighting projects have primarily been under the Ride Entertainment umbrella with Gerstlauer Coasters and the Skycoaster. Is there interest in KCL lighting from other manufacturers?

AV: We have heard from other manufacturers, but there’s nothing solid or confirmed with other manufacturers at this time. We do have a lighting package on the Intamin Short Loop at American Dream. That’s our first non-Gerstlauer roller coaster, so we’ve started branching out a little bit. We think that there’s going to be interest from other companies. We’ve branched out now with the SkyCoaster, and now we’re looking into more tower attractions.

C101: And the last question, which I know you can’t answer. What’s the next coaster to get a KCL lighting package?

AV: [Laughs] I don’t really have an answer for that right now. There’s something coming, but we can’t talk about it.