We’ve finally come to the end of our 19 for ’99 series featuring 18 of our favorite roller coasters built in 1999, 20 years ago. For the last coaster in the series, we’re heading to Pennsylvania to take a look at Twister at Knoebels Amusement Resort. 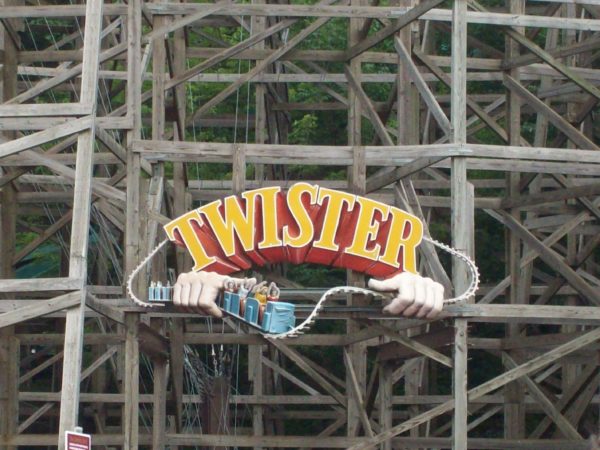 When Knoebels began considering a new roller coaster in 1998, they looked to preserve another classic ride design like they had with Phoenix. The park looked into acquiring a ride known as Mister Twister that had been at Elitch Gardens before it moved. Famed roller coaster designer John C. Allen built original Mister Twister was built in 1964. But, the park relocated in 1994 and Mister Twister didn’t make the move. However, this time rather than dismantling and moving the whole roller coaster, Knoebels instead took the blueprints of the old design and rebuilt it. 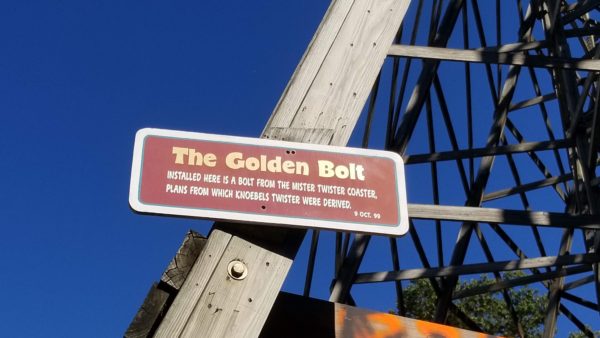 Twister might not be the entire Mister Twister coaster, but there are a few artifacts from the original located on the ride. 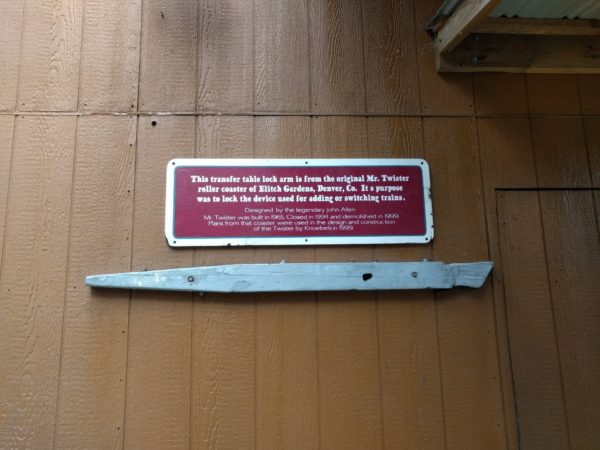 Of the design, Dick Knoebel, President of the park at the time, said “We hope to be the only with two Top 10 coasters in the world.”

Construction began on Twister on November 4, 1998. John Fetterman led the design effort. His goal was to preserve the main elements of the original coaster, but fit it in the available space. First, Fetterman mirrored the original coaster layout to fit it. He also compacted the space of the coaster. The main highlights Knoebels aimed to preserve are the giant double helix, which now goes around the station, and the swooping turn out of the lift hill before the first drop. 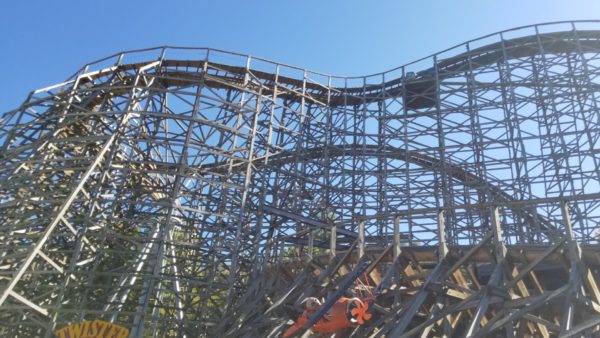 The large swooping turn after the lift hill before the big drop.

One of the unique elements Knoebels added to make it fit is a split lift hill. The train climbs halfway up on one lift, then makes a 180 degree turn before completing the climb up a second hill. This is only “zig-zag” lift hill on a roller coaster. 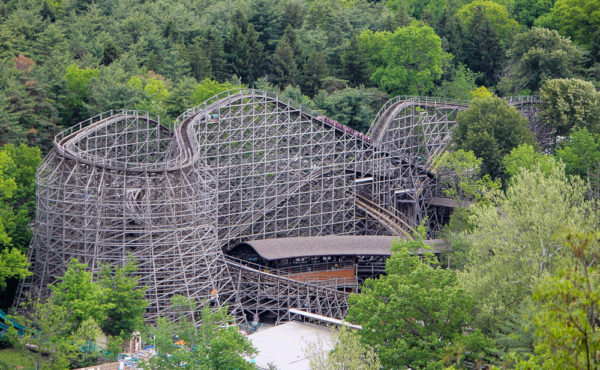 An overview of Twister at Knoebels. You can see the split lift hill, where the first lift rises under the second lift. (courtesy of Negative-G.com)

Twister used 2.5 times as much wood as Phoenix had, with over half a million board feet. At its highest point it reached 101 feet and 7 inches. The first drop is 89 feet, 7 inches, and the coaster is 3,900 feet long with 30 crossovers. It uses Philadelphia Toboggan Company trains and reaches 51 mph.

The park auctioned off the first public rides of the coaster to benefit the Make-A-Wish Foundation, raising over $8,000. This is a tradition of Knoebels that went back to the opening of Phoenix in the 1980s. 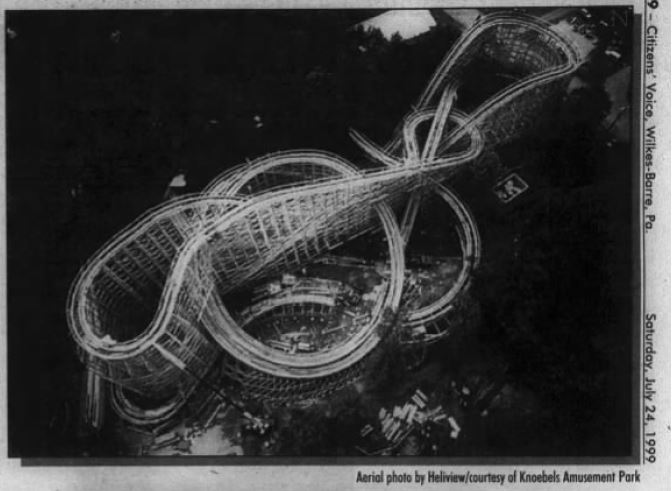 Aerial shot of Twister on opening day showing the overall layout (from the Citizens Voice newspaper).

And just like parks do today, they held a preview for workers, media, and enthusiasts. The response to the coaster seemed pretty universal.

“It’s a ferocious ride. Anyone who loves roller coasters will love this one,” Paul Ruben, North American editor of Park Wolrd Magazine, said.

Bill Gavin, a member of ACE who had ridden the original, told The Daily Item newspaper, “I usually say that the proof is in the ride. I don’t think that that’s the case here, I expect this will be among the best.” 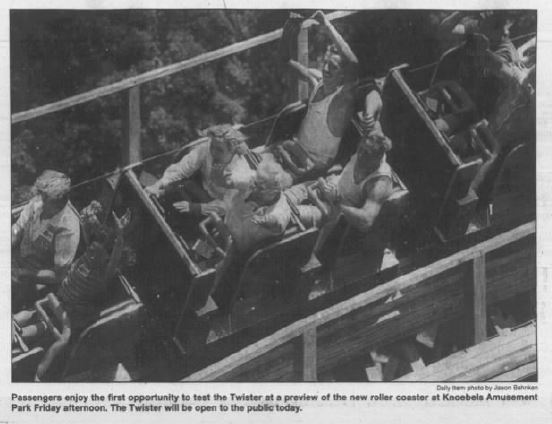 Carl Hittner, one of the first riders, told the Citizens Voice newspaper, “It may just redefine the list of top 10 roller caosters in the United States.”

Knoebel added his own thoughts to those early reports, saying with a smile, “It’s fast. It’s fast and it’s smooth.”

Maybe one of the most important legacies, though, is that Knoebels and Twister showed that classic woodern coasters could be revived, and new ones could be built. 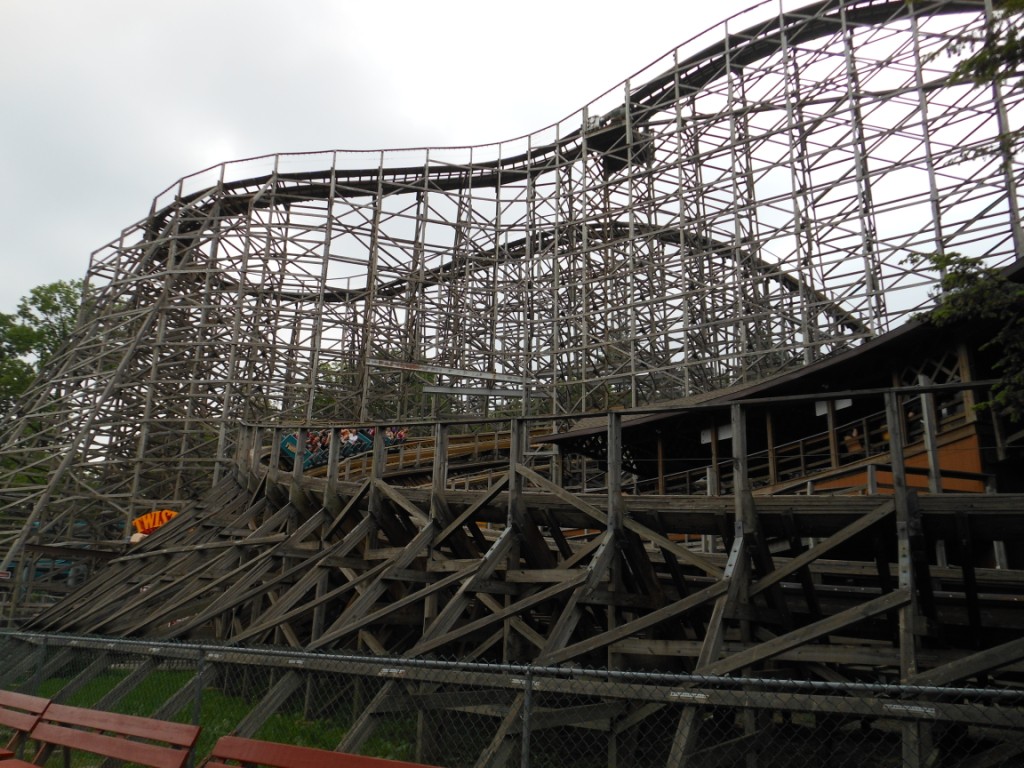 I rode Twister for the first time in 2018, and I became a fan just like all those riders back in ’99. I was completely surprised by the split lift hill, and loved the creative engineering and design that went into that. Plus, who would ever expect a small drop, turn, and then a second lift directly above the first lift? 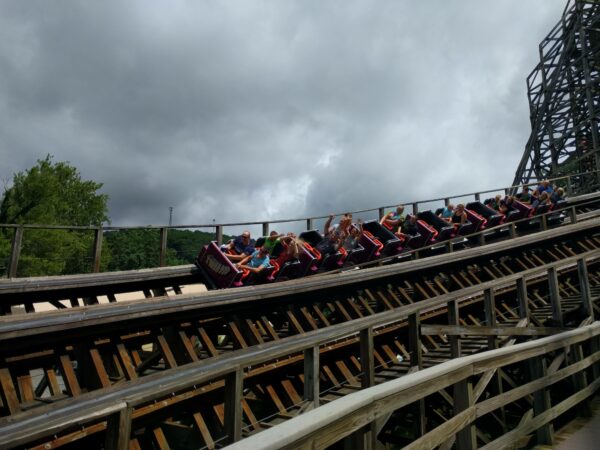 The giant double helix is one of the great unique elements on Twister.

The giant double helix was forceful, but not painful, and the crossovers and twisted turns gave a great disorienting experience. And, like Dick Knoebel said at its opening, it is fast, and it is smooth. It might not be as mind blowing as Phoenix, but it’s definitely an excellent coaster.

Check out the PoV of it below, and if you’ve ridden Twister, let us know in the comments what you think of it!

So that’s it for our 19 for ’99 series. But now we’re going to need your help to decide which of these coasters has been the best. Keep your eye out next week for our full recap of all 19 coasters, and your chance to vote for the best!