We’ve covered Copperhead Strike extensively since it was announced in August 2018. But earlier this month, three Coaster101 writers rode the new Carowinds coaster for the first time. These are their quick thoughts on the park’s new-for-2019 double-launch Mack coaster. 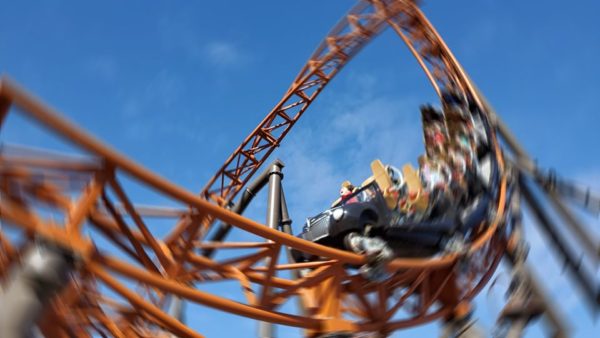 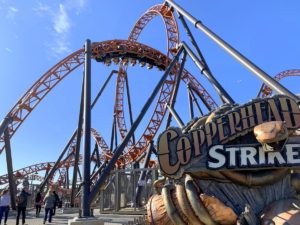 John: Maybe it was the frigid temperatures, but my first ride on Copperhead Strike was incredibly exhilarating. While my face was numb by the end of the ride, a copious amount of adrenaline was pumping through my veins. I wasn’t expecting it to be as well-paced and snappy as it was. It was a ride I’d have to experience at least twice to fully grasp all of the elements stuffed into the 3,255 feet of track.

Kyle: While John was in the front row for his first ride, Nick and I opted for the back. I was also blown away by the ride’s pacing. From start to finish the coaster doesn’t let up, every transition is smooth, and the layout always keeps you guessing where you are. I will say though, after this first ride, I was expecting a quicker ride experience. It could be that we were on one of the first trains of the day, but the ride was just a tad bit slower than I was wanting it to be (but that changed later on).

Nick: Yeah, if we had only gotten the one ride on Copperhead Strike I would’ve said “yeah, it’s alright,” but after subsequent rides, I really fell in love with this coaster. It’s twisted layout and unique elements make it unlike any other roller coaster I’ve been on. 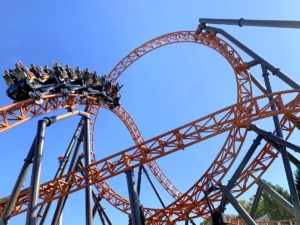 John: I was surprised by how compact the coaster is. The renderings and photos of the coaster made it appear to be much more spread out. I’m a fan of compact coasters, so I was all in. The pacing was incredible. Despite the moments of hang time on a couple of the inversions (more on that below), the ride kept its momentum all the way to the end.

Kyle: I second what John said, the layout is super tight and it works so well. You may expect to get some head-banging on the tight turns and transitions, but you don’t. The Jo-Jo roll out of the station is just brilliant and a memorable way to start off the ride. The hang time on this thing is crazy, especially right out of the gate like that.

Nick: The ride is just non-stop fun. I like how it throws different elements at you, from airtime hills to smooth inversions to tightly twisted turns. 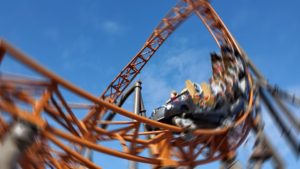 John: The second launch was amazing. Launching over an airtime hill provided such a different sensation as opposed to a traditional straight-track launch. I hope this trend continues — the world needs more of these.

Kyle: I thought the launches were perfectly placed. One to start you out and the other only about 1/3 of the way through the course, but it felt as if the momentum was always gaining. The other thing I love about the launches is their gentleness. Usually with launched coasters, the jolt is quite forceful and pushes you back into your seat, but with Copperhead Strike, the launches are slower to gain speed and almost feel just like a natural progression of the ride.

Nick: Yeah, while other coasters have a much greater initial acceleration that immediately pushes your body back into the seat, Copperhead Strike eases into its launches more gently. There’s something about that second launch over the airtime hill. You don’t really get any airtime but it’s just a fun, “wheee!” kind of moment.

John: Carowinds really could have named Copperhead Strike “Hangtime,” because the ride was full of it. Between the Jo-Jo roll out of the station and the post-launch first vertical loop, there were several seconds where I was sending words of encouragement to the lap-bar-only restraint in hopes that it would do its job of keeping me in my seat.

Nick: I’m not usually a fan of vertical loops but the way the train slows down so much during the loops to give you that hangtime sensation is pretty unique. 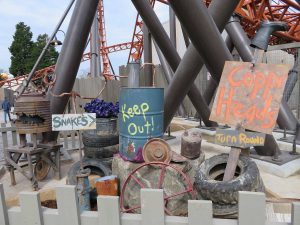 John: The park did a stellar job theming the area surrounding Copperhead Strike. From the detailed queue to the pre-launch show scene, Carowinds has set the bar high for other Cedar Fair coasters. And as someone with a soft spot for the elderly, I very much enjoyed the “Granny Byrd” references throughout.

Kyle: I was shocked by how much theming went into the ride and surrounding plaza. I am familiar with the incredible theming that went into Mystic Timbers, but I think Copperhead Strike even outdoes it. There are so many small details in the entry and queue that you will always see something new. And that ride sign…the designer in me was happy.

Nick: Probably one of the best-themed coasters Cedar Fair has done yet. 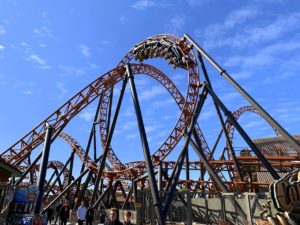 John: While the coaster is smooth, I was surprised to hear an audible rattle from the train throughout the ride. But what is most important is that the ride was smooth.

Kyle: My only disappointment with Copperhead was the queue. Usually when a line in low, the queue will have gates on the ends that will swing open to allow a shorter path to the station, but there were none here. We found ourselves navigating the long switchbacks to completion in order to get up to the station, holding up the kids behind us who were swinging under the rails. It felt like we were walking a long, long time.

Nick: I don’t really have anything negative to say about Copperhead Strike. Like Kyle, I thought the entrance to the queue is kind of in a weird location. Like the awesome looking sign is right in front of the launch and first vertical loop but the actual entrance to the line is kind of hidden on the backside. I definitely preferred sitting towards the front rather than the back. I thought the restraints were weird in that your arms go through the center of it while it’s being lowered but once in place it is quite comfortable. 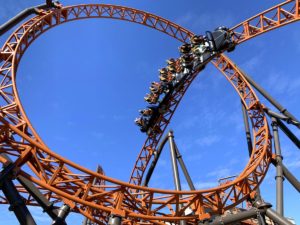 John: Copperhead Strike fills Carowinds’ launch-coaster void created by the removal of the White Lightnin’ shuttle loop coaster in 1988. It’s intense, but not too intense, so younger thrill-seekers-in-training should be able to ride this without being overwhelmed. I hope we see more of these compact Mack launch coasters in the U.S. soon.

Kyle: I really enjoyed Copperhead Strike. Like John said, it adds something to Carowinds’ lineup that wasn’t there before. It is tame enough to be that next-level coaster for younger ones, but it is thrilling enough to keep us coaster enthusiasts happy. I mentioned earlier that my first ride was slightly sluggish, but that changed. I was able to ride in the front seat once in the morning and it felt like a totally different ride, much faster. It also so happened that Copperhead was our last ride of the night and that also was a totally different experience and probably one of my favorite rides of the day. We were right in the middle of the train and the ride felt at its fastest. Factoring in that and the dark, it made for an unforgettable, out of control ride.

Nick: It might be because I just rode it three times with no wait but my hot take would be I think I like this ride better than Maverick at Cedar Point. While Maverick is more intense, it almost always has a long line. Copperhead Strike has more theming and more elements. Despite having a 1,000 feet less of track Copperhead just feels longer for some reason. Copperhead Strike is a great addition to Carowinds and was my second favorite coaster in the park behind Fury 325.

Have you ridden Copperhead Strike? Share your quick thoughts in the comments section below.