Dorney Park, located in Allentown, Pennsylvania, is one of the smaller parks owned by Cedar Fair and is one of the many notable parks in Pennsylvania. Since this is one of the smaller Cedar Fair parks that doesn’t get as much attention from the chain as the larger parks, it often gets overlooked by coaster fans and enthusiasts. And I can see that if this is your home park, it would be easy to get frustrated with the lack of major additions. However, spoiler alert, I loved this park. Something that drew me to the park in the first place was the very solid and well-rounded lineup of coasters, so without further ado, here are the top seven coasters at Dorney Park. 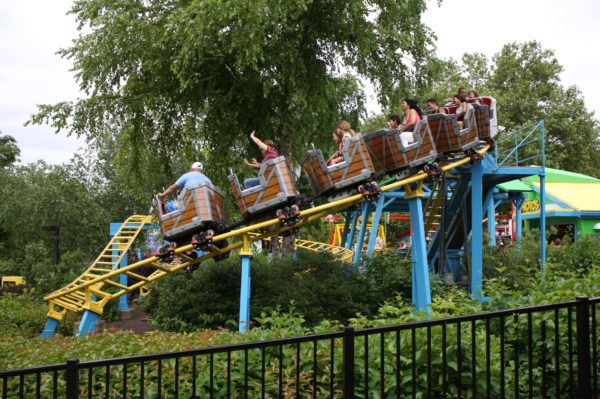 Woodstock Express is a Zamperla family coaster located in the Planet Snoopy kids area of the park. In the name of full disclosure, I feel it’s necessary to say that I did not actually ride this coaster. I am not sure if this is one of the coasters that you need a child to ride, but for me it was not even worth the attempt or the time. I’ve never been the type of enthusiast to ride a kiddie coaster just for the credit, especially at a new park, I’d rather spend my time exploring the park or re-riding an extreme ride. However, I did walk through this section a few times, and the kids and families on the ride seemed to be enjoying it. 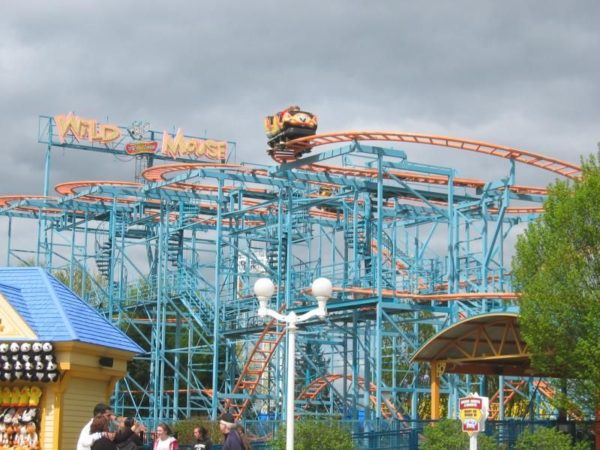 This clone of the classic coaster model was built by Maurer and was introduced at the park in 2000. The layout includes the standard wild mouse turns and drops, and something fun about this ride was that the cars were painted to look like cats and mice. I only rode this ride once, but I thought it was fairly smooth compared to some of the other wild mouse coasters I’ve been on. I’ve always found that the unbanked turns on the top can be painful, especially due to the T-bar style restraint in between the two riders, the forces of the turns typically throw the rider into the bar, causing an uncomfortable experience. However, on this wild mouse, there was padding on the middle bar, which made for a more comfortable ride. 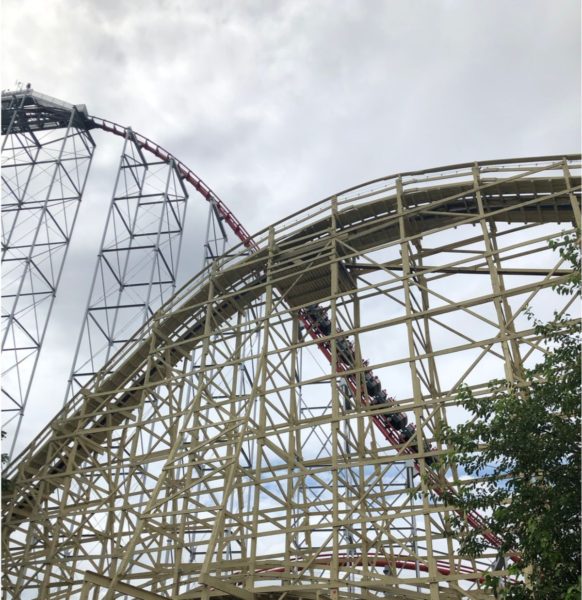 Thunderhawk is a true classic and was recently certified by ACE as a landmark coaster. The ride was built in 1923 and has gone through some refurbishments and retracks through the years, however, I think it still has the classic feel to it. And unfortunately, maybe a little too much of the original feel to it. Behind only Wildcat at Lake Compounce, Thunderhawk is currently the roughest roller coaster I have ever ridden. That being said, it is also the oldest. However, I tend to like older wooden coasters that have some roughness to it, some of my favorite woodies include Thunderbolt at Six Flags New England, Boulder Dash at Lake Compounce, and Comet at Great Escape. So it’s not that I dislike wooden coasters, this particular ride was just not enjoyable for me. 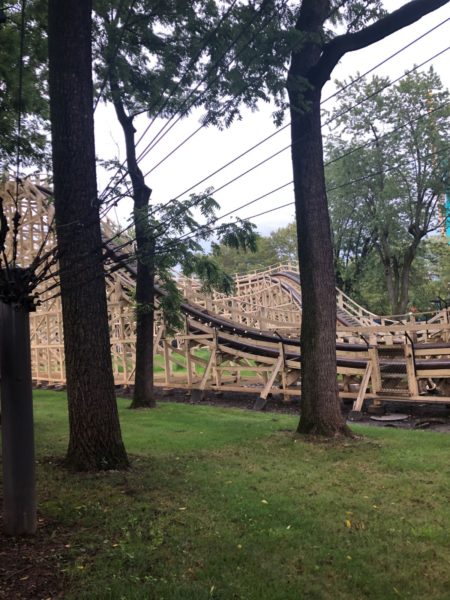 There just seemed to be “potholes”, or rough jolts, at the bottom of every single drop, and the high, tight turns that I enjoy on other woodies shook me around too much to appreciate them. I rode in the back row for the airtime, so that may have contributed to some of the roughness, however, I didn’t have it in me to try and ride again in a different row. It’s a shame, because if it were smoother, this layout could really be fun, and I did get some good pops of airtime on the top of some of the hills. 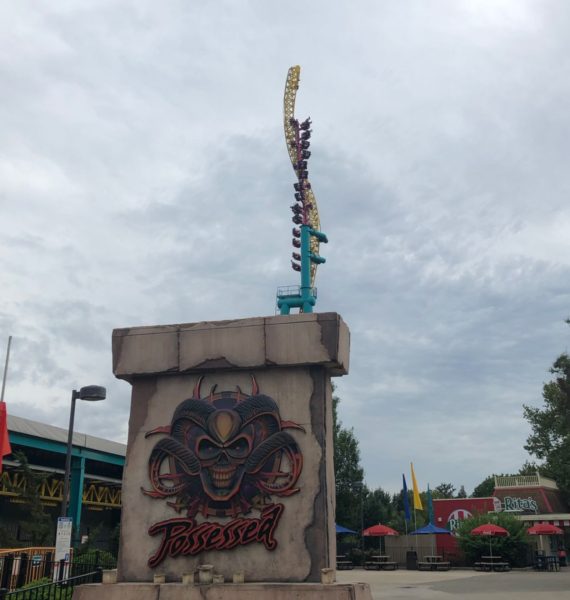 Possessed is an Intamin Impulse coaster, similar to other LIM launched inverted coasters, and I have to say, I liked this coaster a lot more than I thought I would. While it’s a pretty simple design, it’s extremely effective. I wasn’t prepared for just how intense those launches are, and I found myself pretty terrified when the train would reach the top of the spikes. Possessed is the type of model that features one vertical spike and one 90° twisted spike. This ride really made me question why there aren’t more launched inverted coasters, especially with these LIM launches, because a longer layout would just add to the intensity, especially with multiple launches. I know Volcano: The Blast Coaster had a lot of maintenance problems, but if there is a way that this style could be perfected, it would make for a quality coaster. 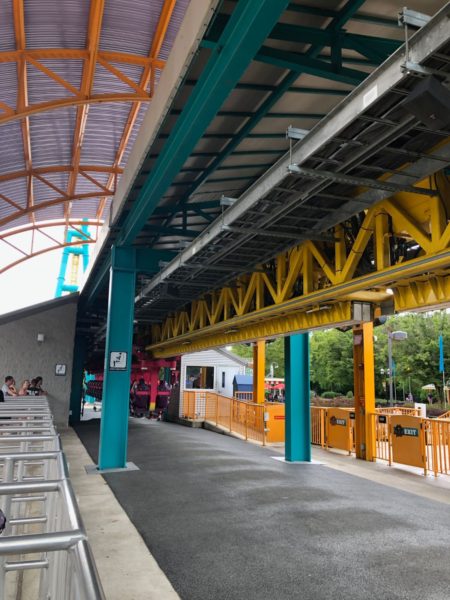 The launches were intense every single time, especially in the front seat. I rode in the front and the back, and each had their perks. I personally preferred the front, because having nothing in between you and the top of the twisted spike is positively thrilling, not to mention the wind in your face on the extremely intense launches. Apparently there is a holding brake on the vertical spike, but it has been turned off or a few years. I didn’t mind it, I think it would’ve slowed down the momentum of the coaster that I think benefits from being a non-stop adrenaline rush. Plus, this ride was previously located at Geauga Lake, so it’s also cool riding a piece of theme park history. 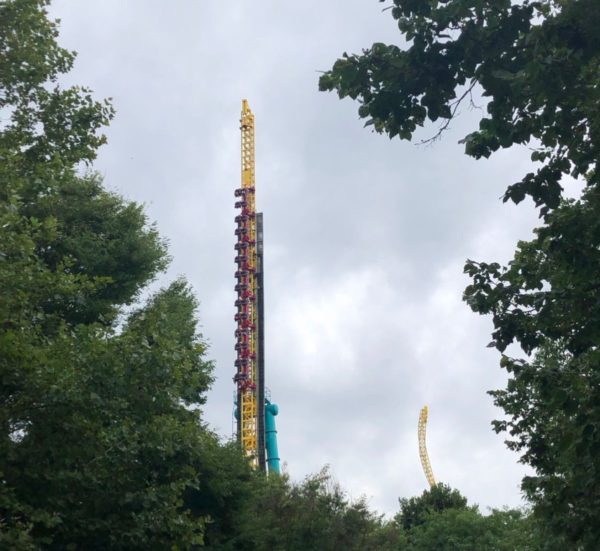 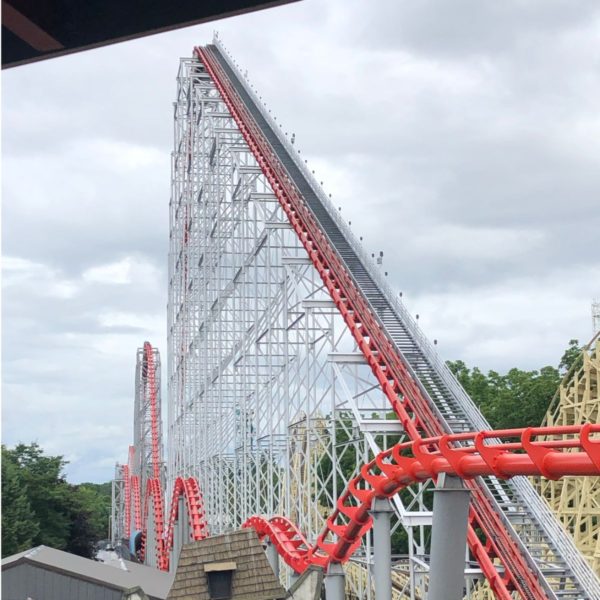 It may be a little shocking to see the 200 ft Steel Force hypercoaster take the number three spot on this list, but believe me, I was just as surprised. I was a little let down when I got off of this coaster and did not receive the airtime filled ride I had anticipated. This was my first Morgan hypercoaster, so I didn’t know what to expect, but I had heard positive things. I was disappointed that I didn’t get much airtime on this ride, save for a few good moments on the final few smaller hills. 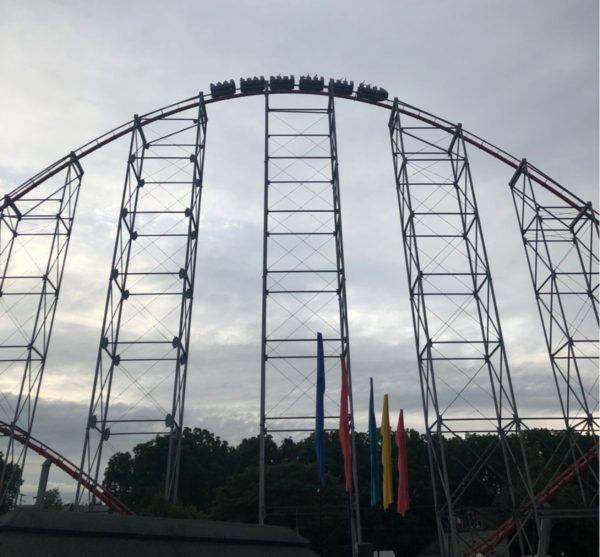 What the ride lacked in airtime, however, it made up for in speed. The 75mph max speed really sets in after that first drop, and some of the helixes and wide turns seem a lot more intense with the wind blowing in your face. The lift hill on this coaster is very large too, you can see a lot of this park from the highway and Steel Force’s lift stands out among the skyline. Having such a large and slow-moving lift hill builds the tension, and once you get to the drop, the speed takes over until you hit the brake run. 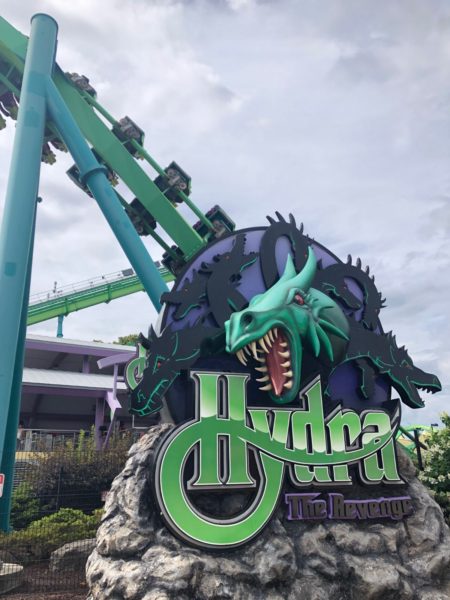 Something that Dorney Park does better than a good amount of parks that I’ve seen is putting a lot of effort into how their rides are presented. The Cedar Fair chain is known for many of its impressive ride signage, but Dorney Park takes that a step further with its beautiful two-tone paint on their B&M coasters, including their floorless coaster, Hydra. The coaster features a light green track spine, with darker green on the bottom of the spine and on the rails (almost identical to Raptor at Cedar Point). Besides the great presentation, I found the ride to be very thrilling despite it’s not steep and fairly short first drop.

The Jojo roll before the lift hill was awesome, the slow heartline inversion gave some serious hangtime before the ride even got started. After the drop, I couldn’t believe just how much airtime I got on this ride. I thought the ride would mostly focus on inversions, and it did, but with some awesome airtime moments in between and even during. 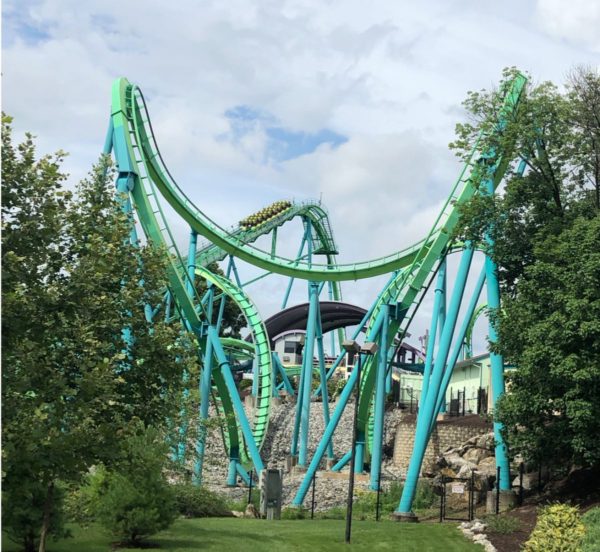 I think between the Jojo roll and the airtime pops, this is a back row coaster, even though you can get a similar experience in the front. The ride also packs a lot into its fairly small layout and is just an immensely enjoyable ride overall. I found myself re-riding Hydra much more than I thought I would. Also, just as a side note, the Hydra gift shop features awesome park merchandise like Coasterdynamix metal models of select coasters as well as a Coasterdynamix “Statix” highly detailed plastic model of the Hydra brake run with a train on it. 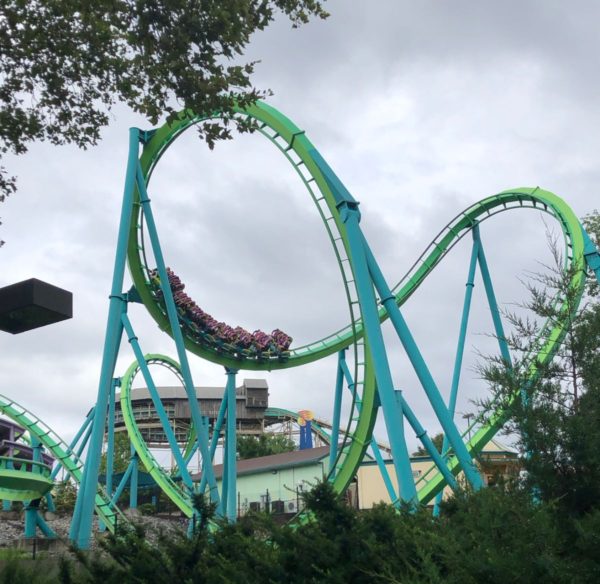 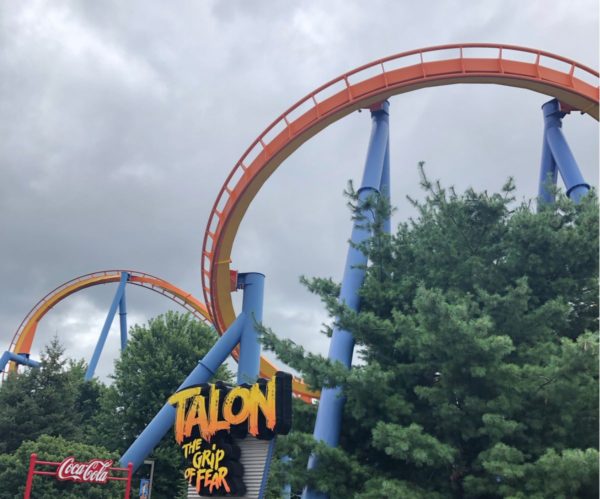 If you told me before I came to Dorney Park that Talon, the park’s B&M invert, would be my favorite coaster at the park as well as crack my Top 10 list of my favorite coasters, I would have called you crazy. And yet, here we are. Talon was my first ride at the park, and what a ride it was. I still think that my first ride was still my favorite, and some of the sensations I experienced on the ride were near indescribable. I truly believe that while on this ride, I experienced both inverted upside-down hangtime as well as airtime, possibly both at once. Simply put, it was insane. 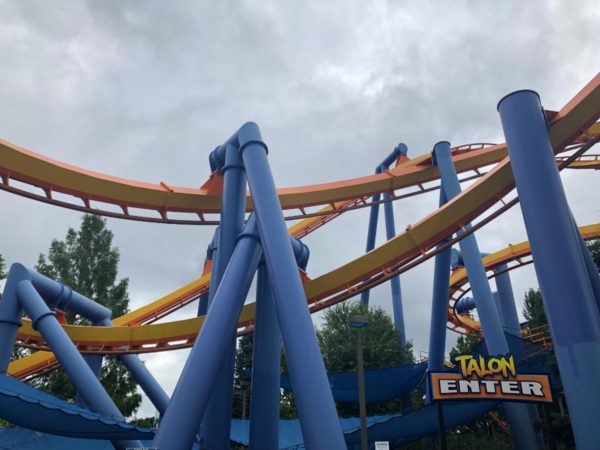 The ride is glossy smooth, as expected from B&M, and from the drop to the brake run, Talon offered one element after the other, with fast-paced inversions and transitions all combined to make one intense and impressive ride. My favorite moments were when the elements would blend together, like a corkscrew followed immediately by a low to the ground helix toward the end of the ride. Also during the ride was an actual airtime hill that gave some serious floater, separate from the upside down airtime I described earlier. 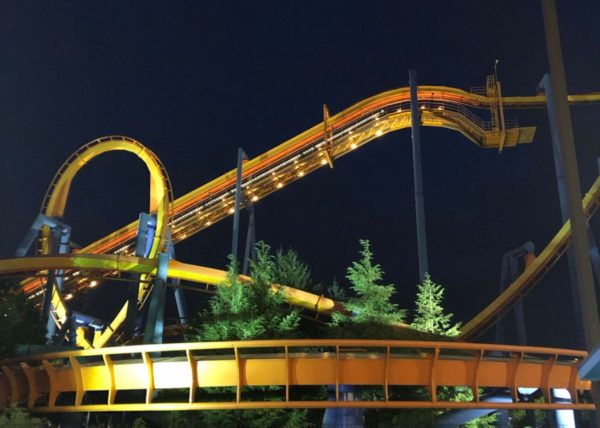 I have never felt the hangtime or airtime I did on Talon on another invert, including Montu or the nearby Great Bear. The ride also features that fantastic two-tone paint, with very visually appealing yellow track with orange trim on the bottom of the track spine and on the rails. It’s an intense and fast-paced ride, nearly making me grey out on some of the elements. I rode Talon multiple times throughout the day, and each time I was just as impressed.

I even got one front row night ride on Talon as well as the only person on the entire train, and that was an experience unto itself. Talon manages to be the standout coaster in a lineup filled with many other great coasters, and that is an accomplishment. 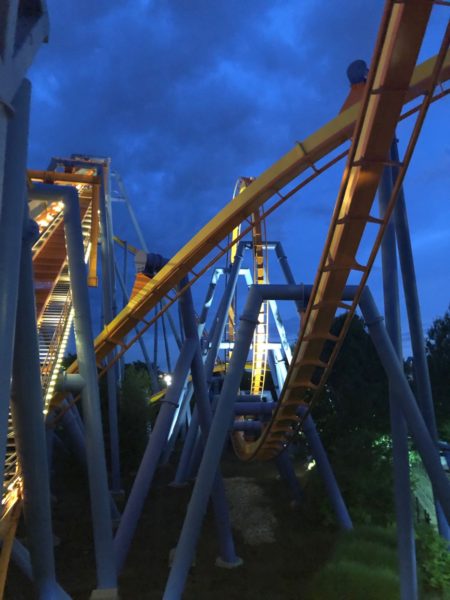 Overall, I really enjoyed my day at Dorney Park. I thought the park was very well maintained, with nice landscaping and scenery all around the park. I would highly recommend a trip to Dorney Park to check out the great lineup of rides and coasters. If you’ve been to Dorney Park, what did you think? Let us know in the comments below!