Knott’s Berry Farm released a bunch of exciting news and dates today. The most exciting of those is that Knott’s revealed what was hinted at last month. The Knott’s Bear-y Tales story is returning in a new 4-D interactive dark ride!

Called Knott’s Bear-y Tales: Return to the Fair, the new interactive ride will take guests through “re-imagined show scenes that are reminiscent of the original dark ride, including the Boysenberry Pie Factory, Frog Forest, Fortune Teller Camp, Thunder Cave, and Weird Woods,  culminating in a celebration at the County Fair.” 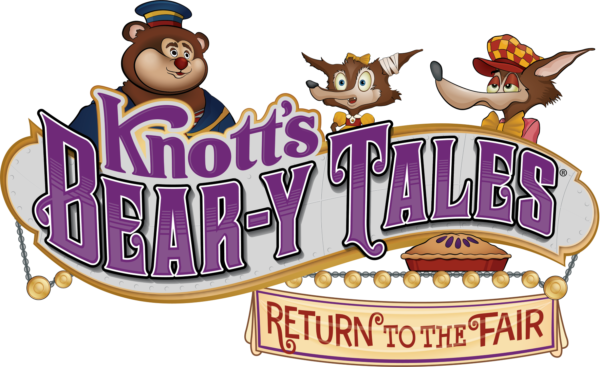 The original attraction created by famous Disney Imagineer Rolly Crump closed in 1986. The new ride takes place, fittingly, 34 years after the original Bear-y Tales.  It follows the heroes of Boysen Bear and Girlsen Bear as they try to earn a blue ribbon at the fair for their boysenberry pies. But, Crafty Coyote and his pups try to steal the pies along the way for themselves (understandably). Using a “jelly blaster”, you’ll help recover the pies. Don’t ask me how that works.

The new ride will be part of the Knott’s Berry Farm 100th Anniversary celebration from May 15 through August 30.

“The return of Knott’s Bear-y Tales is perfect for the 100th anniversary because it brings back one of the park’s most nostalgic and beloved attractions in an innovative 4-D dark ride format that will delight an entirely new generation of fans,” said Jon Storbeck, Vice President & General Manager of Knott’s Berry Farm.

Although the park didn’t say it explicitly in the press release, this is presumably the project they’re working on with Triotech, and we assume it will replace “Voyage to the Iron Reef”.

The park also revealed some more details on the 100th anniversary celebration. Ghost Town Alive! will be back with a new interactive storyline. Additionally, the Knott’s Summer Nights summer festival returns with a special 100th Anniversary edition of the event. Both those events also plan to run from May 15 – August 30.

The park also announced the dates for its other festivals throughout the year. Peanuts Celebration runs on weekends from January 25 to March 1st. The Boysenberry Festival comes back March 20-April 19 for a full month of delicious eats. The parks Halloween Celebrations, Spooky Farm and Scary Farm return September 26-October 31. Finally the 2020 version of Knott’s Merry Farm will run November 20, 2020 to January 3, 2021 (not to be confused with this years Merry Farm, running Nov 22 to Jan 5).

We expect we’ll have a lot more detail on the new Bear-y Tales attraction at IAAPA later this month. We’re going to the Expo, so we’ll make sure to bring you any and all updates from Triotech and Knott’s Berry Farm! In the meantime, for more information on all of the Knott’s events, including this years Knott’s Merry Farm, check out their official site. Finally, let us know in the comments how excited you are about the return of Bear-y Tales characters!