SeaWorld Parks announced today a new park where guests could “come and play and everything’s A-OK.” Sesame Place San Diego, the chain’s second “Sesame Street” stand-alone park, will open in the spring of 2021. 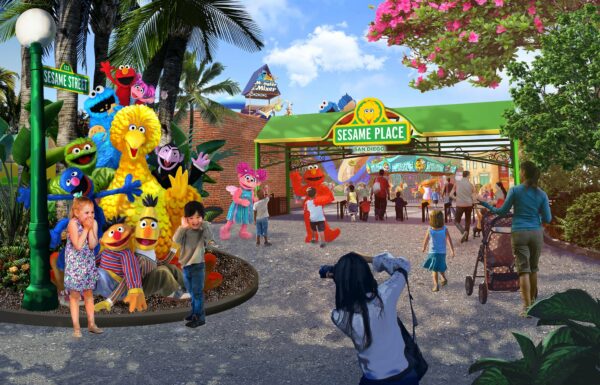 “As we celebrate Sesame Street’s 50th anniversary, we are excited to share the news of a major opportunity for kids and families to connect with and learn from the brand and its beloved characters,” said Steve Youngwood, president, media and education and COO, Sesame Workshop. “The opening of Sesame Place San Diego will give guests a unique and powerful way to experience Sesame Street, enable us to connect with even more families, and further our educational mission.” [source]

The new 17-acre Sesame Place will be located 20 miles south of SeaWorld San Diego in Chula Vista, CA. The space is currently occupied Aquatica San Diego, which will have its final season in 2020. The concept renderings for Sesame Place San Diego show a re-theme many of Aquatica’s existing slides along with multiple “dry” rides, making the new park a hybrid water park and theme park.

“It is a significant investment for the company,” said Marilyn Hannes, President of SeaWorld San Diego “This is the first new Sesame Place park in 40 years. It certainly expands our commitment to the San Diego region, as well as to theme parks in the United States. It is a big decision and big investment for us.”

The concept art shows several family flat rides being installed in the former water park, including a swing ride, carousel, and “Crazy Bus,” along with a roller coaster that appears to be themed to “Super Grover.” So yes, you will be able to get a coaster credit at the new park!

Though the manufacturer of the roller coaster isn’t mentioned, other Grover themed coasters in the SeaWorld Parks family, at SeaWorld Orlando, SeaWorld San Antonio and both Busch Gardens parks, are manufactured by Zierer.

For now, the only existing Aquatica slide targeted for removal is HooRoo Run, which has an 80-foot drop, Hannes told the San Diego Union Tribune. 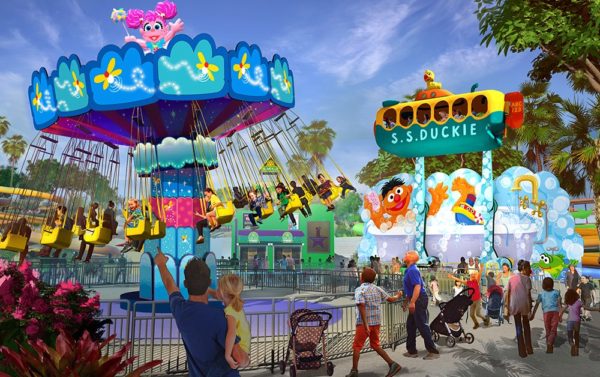 Youngwood told the Associated Press that the two brands, SeaWorld and Sesame Workshop, have common objectives.

“We want to engage and educate families. We mutually respect each side’s expertise and we collaborate together to make it work,” he said.

In the past year, SeaWorld also has been offering specialized services at its parks for visitors with autism, and Sesame Street Place in San Diego will also offer those services, and will be classified as a Certified Autism Center, just like Sesame Place in Pennsylvania. According to the San Diego Union Tribune, Staff will receive autism sensitivity and awareness training, and the park will set aside quiet areas. Sesame Place San Diego also will publish a sensory guide on its website so parents can plan their family visit around their child’s needs. 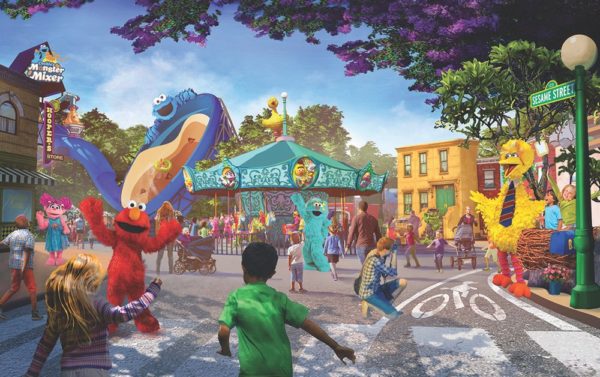 At 17 acres, Sesame Place San Diego will be slightly larger than it’s east coast counterpart, which is situated on 14 acres in Langhorne, PA, outside of Philadelphia. The original Sesame Place opened in 1980.

The San Diego park will open the Sesame Street experience to the western U.S., as well as to visitors from south of the border, said Marilyn Hannes, president of SeaWorld San Diego, told the AP.

“I think we will pull a more international audience,” Hannes said.

This will be the second re-theme and re-brand of the Chula Vista water park in the last decade. SeaWorld acquired the park from Cedar Fair in 2012, when it was formerly known as Knott’s Soak City Chula Vista. It opened as Aquatica in 2013.

For more information, be sure to visit the Sesame Place San Diego Website!

Are you excited about Sesame Place San Diego? Let us know in the comments below!