Note: This is the second part of a two-part series contrasting Coney Island’s Golden Age and its present-day state. You can read the first part here.

A piece of advice: if you visit Coney Island, take the subway all the way to the Coney Island/Stillwell Avenue stop. Don’t try to be clever and get off at West 8th Street just because it’s closer to the Cyclone. You might regret it, like I did. 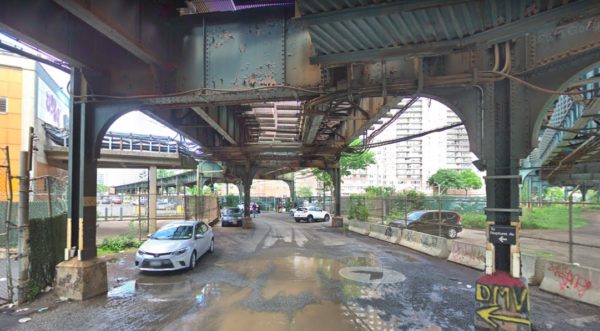 The scene welcoming you to Coney Island if you exit the West 8th Street stop at the east end of the platform. Courtesy Google Street View.

I exited the station at the wrong end of the platform and found myself trapped in a dystopian landscape: chain-link fences topped with barbed wire on either side; the elevated subway tracks looming overhead; no exit to Surf Avenue where the Cyclone sits just across the street. In fact, unless you pay to reenter the station, your only way out is to walk the opposite direction, either north or east, until you’re no longer caged in by asphalt and steel. It took me 20 minutes to work my way back around.

That being said, it was as good an introduction to present-day Coney Island as any.

While other formerly run-down parts of New York City have been transformed into fashionable tourist destinations—the High Line, Hudson River Park, the Lower East Side—Coney Island remains proudly unpolished. You will not find Starbucks and Chipotles and SoulCycles here. It feels less like an iconic tourist destination and more like a carnival set up on the edge of town which, in a sense, it is. 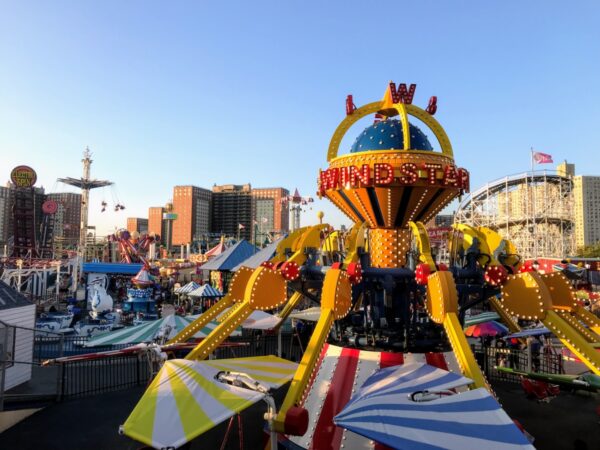 Coney Island feels like an urban carnival. The rides pictured here are part of the new, Zamperla-owned Luna Park.

In correcting my navigational error, I ended up approaching the Cyclone via a large boulevard that runs down the eastern flank of where Luna Park once stood. Today it’s the site of monolithic apartment towers: the “Luna Park Housing Corporation.” 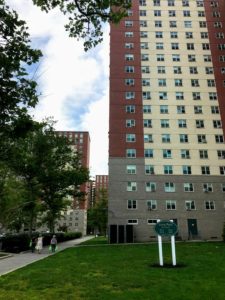 The site of the original, world-famous Luna Park is now a collection of enormous apartment towers.

This is one thing that quickly becomes clear at Coney Island—its present-day identity is built on a foundation of nostalgia. Some of that nostalgia feels genuine and soulful. The Coney Island Circus Sideshow and the Mermaid Parade are good examples of this. They’re new traditions but they really do try to capture the old spirit of the place. In other cases, however, the references to old Coney Island are just empty branding. Hence, the Luna Park Housing Corporation, whose towers make up five of the twenty or so massive, Orwellian housing complexes that now dominate Coney Island’s skyline.

Most of Coney Island is now residential. While other parts were redeveloped into suburban neighborhoods with single-family homes, the area nearer the amusement district (the old West Brighton) has more highrises, as well as vast, desolate parking lots. (Check out this map to see where some of Coney Island’s Golden Age parks and attractions once stood.)

It’s hard not to notice how much cars have transformed the landscape. You can see how the neighborhood was cut up with wide moats of asphalt. What remains of Coney Island’s core entertainment district is bounded by the crescent of Surf Avenue. Once you’re within that strip, threading the narrow lanes between Zamperla rides and strolling on the Boardwalk you get a better sense of the crowded, compressed energy of the old Coney Island. But it’s hard to forget that, a couple hundred yards away, the city feels dead. 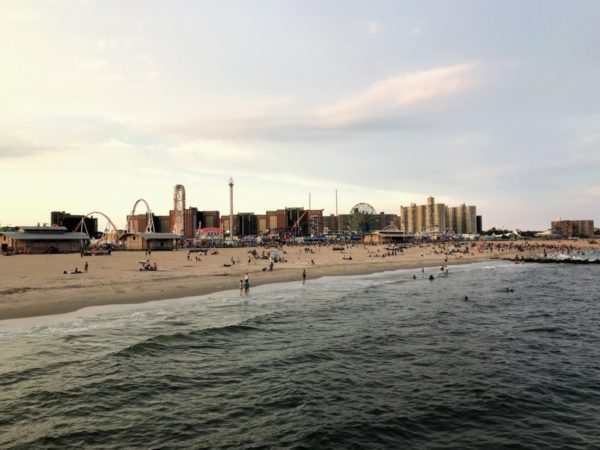 I almost wonder if a better way to experience the energy of Golden Age Coney Island is to visit today’s Times Square, with its eye-catching billboards, hustling performers, theater spectaculars, and other eclectic entertainments like Madame Tussaud’s and National Geographic Encounter: Ocean Odyssey. If you were to plop the Disneyland resort down in the midst of all that (as a stand-in for Luna Park and Dreamland), then you’d start to get a sense of what visitors to Coney Island must have felt back in the day. 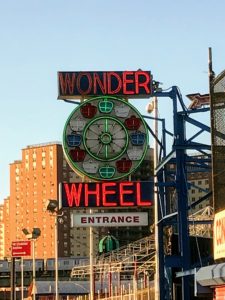 Today, Coney Island’s amusement district is dominated by two “parks”: the tiny Deno’s Wonder Wheel Amusement Park, and the sprawling Luna Park. Neither bears much resemblance to the gated parks of the Golden Age, either in style or substance. Instead, they operate more or less like your typical county fair. Anyone is free to wander around, to play the games, to purchase concessions, and you can buy tickets or wristbands for the rides. It’s actually difficult to distinguish between the two parks—Deno’s sits in a little pocket right in the middle of Luna Park—so except for ticket-buying purposes, they’re functionally one sprawling carnival. 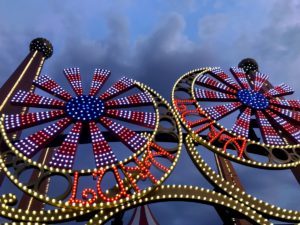 This entrance sign for today’s Luna Park mimics a design from the original Luna Park (1903-1944).

The current-day Luna Park has no connection to the original Luna Park, except where they’ve mimicked some of the lighting and iconography from the original Luna Park’s entrance. In fact, the new Luna Park only opened in 2010, incorporating most of the property of Astroland, which itself existed on land that was never part of the big three Coney Island parks. Although Deno’s is still family-owned and operated, Luna Park is actually a subsidiary of the Italian ride-manufacturer, Zamperla, which has furnished virtually all of the rides aside from the two vintage ones: the Cyclone and the B&B Carousel. (Coney Island’s third and final operating, vintage ride is Deno’s Wonder Wheel, which dates to 1920.) 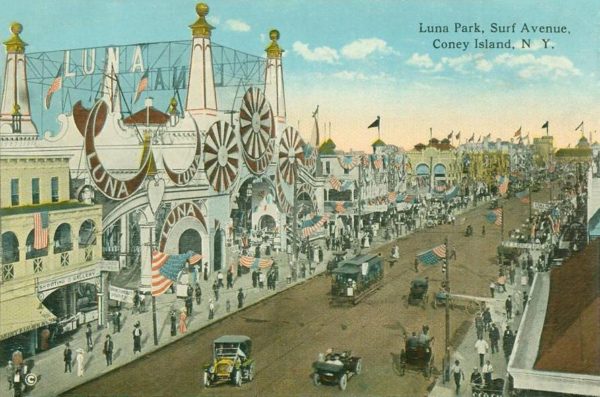 During the Golden Age, this area was occupied not by any of the famous parks but by a variety of independent rides, dance halls, saloons, hotels, and bathhouses. The most infamous street of the old Coney Island—the core of the independent amusement district—was the Bowery, which still runs for a stretch between Jones Walk and West 15th Street and is lined mostly with food stalls. It’s worth walking down this stretch and imagining what it looked like a hundred years ago, lined with beer halls, shows, and souvenir shops. 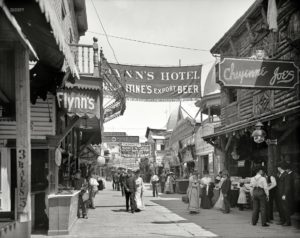 The view down Coney Island’s Bowery, the one-time heart of its entertainment district, likely 1900-1910. Archival image.

In the spirit of old Coney Island, there are still a smattering of independently-operated amusements that exist outside of the new Luna Park and Deno’s (like this bumper car place). The other major attractions in the area are the New York Aquarium, which sits on the former site of Dreamland, and the Brooklyn Cyclones minor league baseball stadium, which sits on the former site of Steeplechase Park.

My initial impression of Coney Island as a grim, glorified carnival began to soften as I strolled down the famous Boardwalk. The area was packed with families, couples, and groups of friends out enjoying the ocean breeze on a steamy summer day. Like the crowds of a hundred years ago, the crowds today continue to reflect New York’s large number and diversity of immigrant communities. I probably overheard a dozen different languages in the short time I was there. Of all aspects of Coney Island, this might be the thing that has changed the least. It’s still a draw for New Yorkers looking for a way to entertain the family and stay cool.

The more I walked around, the more glimpses I caught of the old Coney Island. The Steeplechase Pier, for example, dates back to the early days of Steeplechase Park, around 1900. It’s been remodeled over the years, of course, but if you walk out to the end of it, you can imagine what it would have been like to arrive at Coney Island by steamship, as many people did during the Golden Age. 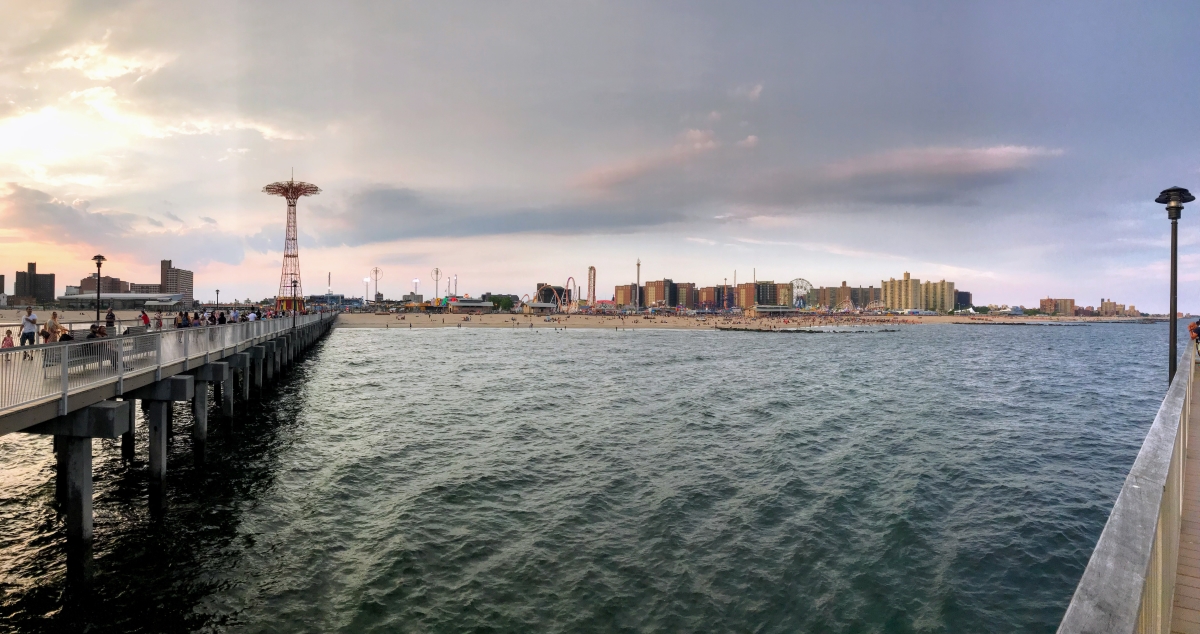 A panorama of Coney Island from the Steeplechase Pier.

At the foot of the pier, you’ll find the B&B Carousel, which was built in a Coney Island workshop in 1906 and operated in New Jersey for a few decades before returning to Coney Island. And right next to the carousel, you’ll find the towering Parachute Jump. It might only date to 1939, when it operated at the New York World’s Fair before being relocated to Steeplechase Park in 1940, but it’s a perfect example of how Coney Island’s amusement operators appropriated rides from world’s fairs and set them up permanently in Coney Island (the most famous example being A Trip to the Moon, which arguably launched the Golden Age when it was brought from the 1901 Pan-American Exposition in Buffalo to Steeplechase Park and then Luna Park). 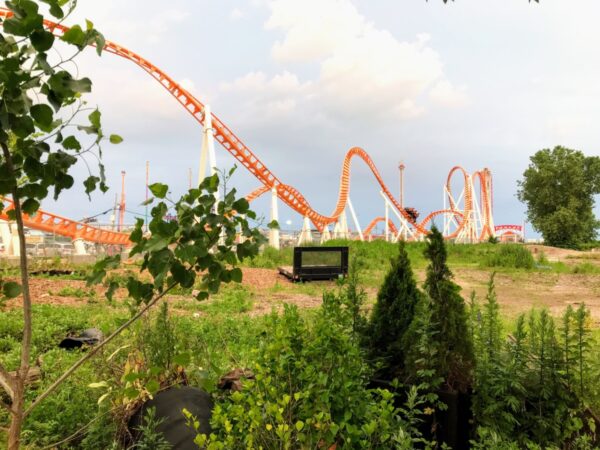 A weedy lot remains where the old Thunderbolt (1925-1982) used to stand. The new Zamperla Thunderbolt unfolds on a narrow strip down the eastern edge.

Alongside the pieces of history, it’s also clear that Coney Island’s operators (mainly Zamperla’s Luna Park) are trying to inject new life into the area. The new Thunderbolt roller coaster is the best example of this. It opened in 2014 on a tiny strip of land right next to the site of its namesake, the original Thunderbolt wooden coaster, which was demolished in 2000 after sitting abandoned for 18 years. (That lot remains undeveloped and overgrown with weeds today.)

Needless to say, however, no trip to Coney Island is complete without a ride on the Cyclone. I mentioned at the beginning of this series that my first trip to Coney Island was in the early 2000s when I went to ride the Cyclone and got thoroughly clobbered by it. I’m pleased to report, however, that those painful days are gone. The Cyclone is probably running better than it ever has thanks to a multi-season refurbishment by Great Coaster International that wrapped up in 2016 and left the icon’s 92-year-old character fully intact while polishing out some of its more vindictive tendencies. Coney Island is still worth visiting for the Cyclone, alone. 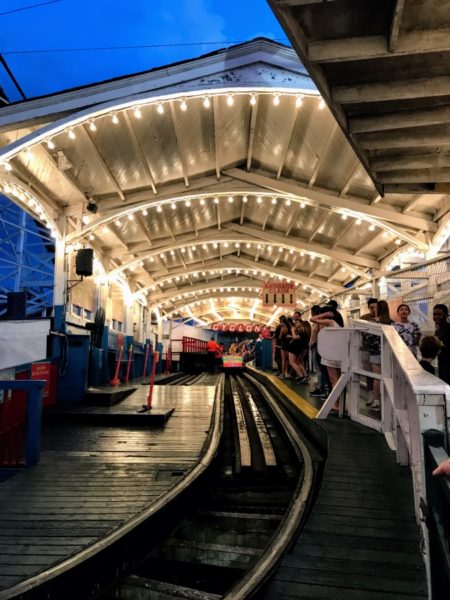 Ride operators still use a lever to manually brake the train as it enters the station.

Looking back, I’m glad I decided to take the time to learn more about Coney Island. Golden Age Coney Island still feels like something of a lost civilization to me, but being able to walk down the Bowery or past where the entrance to the old Luna Park used to be and imagine the people and places that stood there over 100 years ago is a neat experience.

Did it turn me into a Coney Island lover? I wouldn’t go that far. It’s still a rough-edged place, and I never found the atmosphere particularly friendly or relaxing. Still, I think it’s a necessary pilgrimage for anyone interested in roller coasters and amusement parks. And more than just necessary, it’s fun! There’s plenty to see and do, you’re right on the beach, and it’s fascinating to think about the measures people have taken to entertain themselves, not just 100 years ago, but today.

A note on sources: My main sources for learning about Coney Island’s past were two info-packed websites, Heart of Coney Island and the Coney Island History Site. They’re definitely worth perusing if you want to know more. The Bowery Boys podcast also has a few episodes about Coney Island. I also consulted Robert Cartmell’s classic roller coaster history, The Incredible Scream Machine.