Like its sister parks in Orlando and Tampa, SeaWorld San Antonio had a coaster announcement of its own today. When they originally teased their new coaster as the “tallest and fastest” wooden coaster in Texas last month, many other details were left out, including a name. However, Texas Stingray is coming to SeaWorld San Antonio in 2020.

JUST ANNOUNCED! Are you ready to take on Texas Stingray? – Spring 2020! #SeaWorldSanAntonio pic.twitter.com/1rAgvklNMn

Texas Stingray will not only be the tallest and fastest wooden coaster in Texas, it will be the longest as well. Featuring a 100′ drop and a track length of 3,379 feet, the coaster will reach a top speed of 55 mph.

According to the San Antonio Business Journal, the coaster will also feature a 100-foot-long tunnel, as well as multiple banks and turns, some at angles approaching 80 degrees. 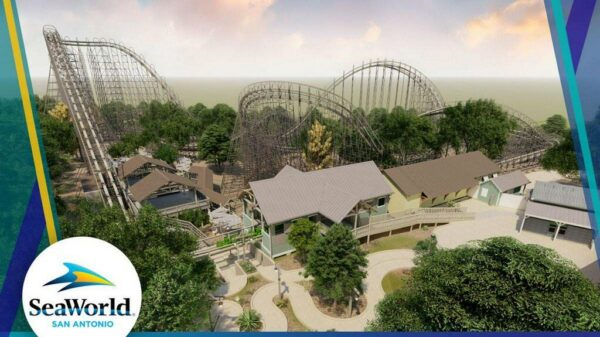 It’s now confirmed Texas Stingray will be built by Great Coasters International, and will be the second operating GCI coaster at a SeaWorld-owned park, joining InvadR at Busch Gardens Williamsburg. Park officials told the San Antonio Business Journal that Texas Stingray would be like InvadR’s “big cousin.”

Below is the overhead layout for Texas Stingray, which is filled with 16 airtime hills. The straight first drop is an unusual feature on a GCI which often have swooping, turning first drops. 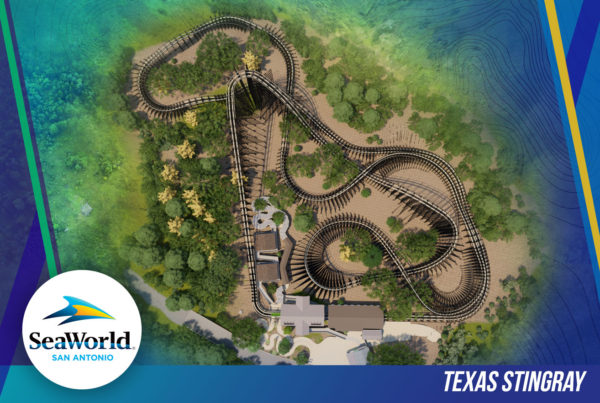 Take a ride on the record breaking wooden coaster by watching the point of view video below. I like how a lot of the action in the second half of the ride looks low to the ground and maintains its speed.

The new ride is still under construction on a site near SeaWorld San Antonio’s new Turtle Reef attraction and its Orca Stadium, and is scheduled to open in Spring 2020. With Texas Stingray, the park will now be home to five unique coaster experiences. The structure is already under-construction with the lift hill topped off.