Welcome to another installment of our “19 for ’99” series where we’re highlighting 19 roller coasters that opened in 1999. 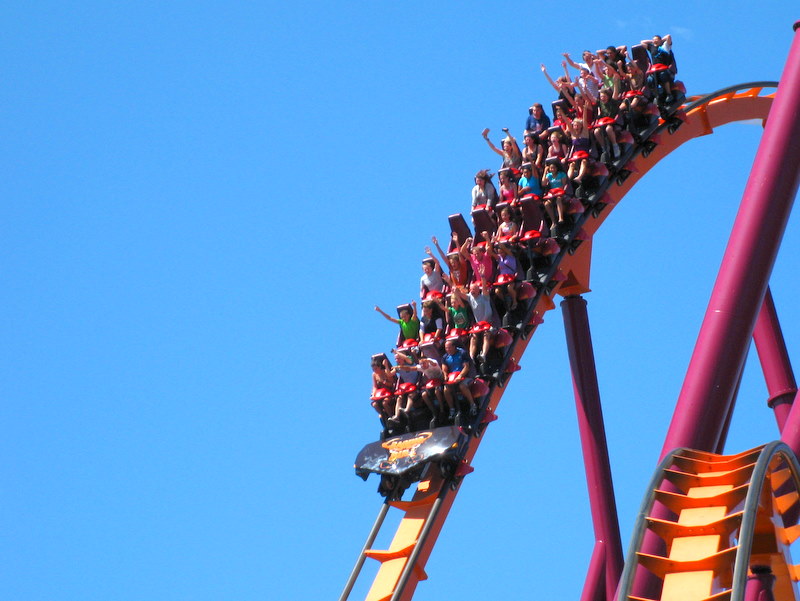 This week, we head to Six Flags Great America to take a ride on Raging Bull, the world’s first “hyper-twister” roller coaster. 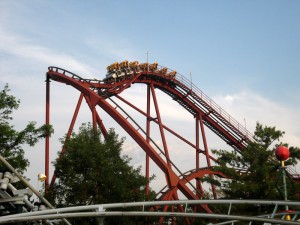 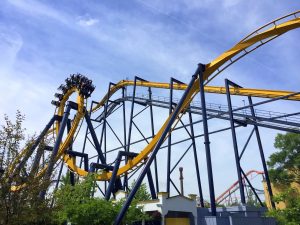 The park has been a testing ground of sorts for the company. Six Flags Great America has been home to several B&M “firsts,” including B&M’s first coaster, the stand-up Iron Wolf that opened in 1990 (now operating as a sit-down floorless coaster, Firebird, at Six Flags America). In 1992, the company built the world’s first inverted coaster, the legendary Batman: The Ride.

In October of 1998, Six Flags Great America unveiled plans for yet another B&M creation — Raging Bull, which would become the world’s first “hyper-twister” coaster.

Raging Bull would open in the Southwest Territory section of the park. It was built over a former overflow parking lot as well as space vacated by the removal of the Rolling Thunder bobsled coaster, which now operates as Alpine Bobsled at the Great Escape (also in the Six Flags family of parks).

Raging Bull’s “twisted” layout (below) occupies a much smaller footprint than Apollo’s Chariot.

Raging Bull is commonly referred to as a high capacity “people eater” thanks to its three 36-seat trains. While the coaster still draws long lines, they typically move fast. 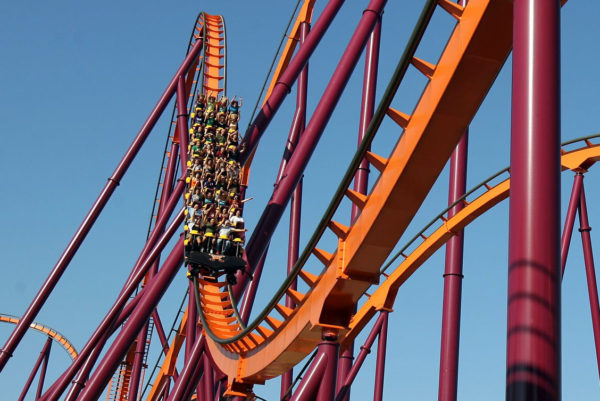 The exposed trains feature clamshell-shaped restraints — and nothing else — which make for a very liberating and slightly terrifying ride. 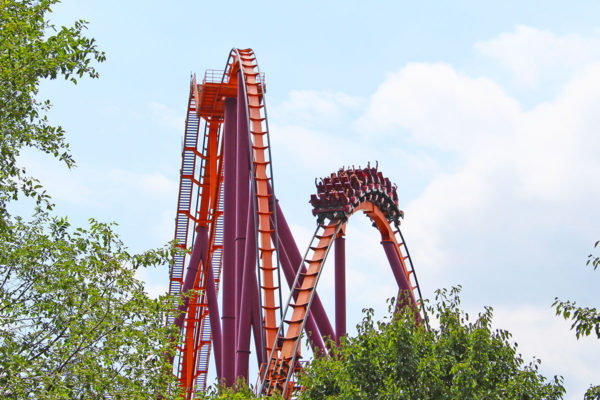 The park typically operates only two trains until the summer season when the third train (which is usually undergoing service) is reintroduced to the track.

In 1998, Premier Parks became the parent company of Six Flags purchasing the remaining stake of former owner Time Warner. The Time Warner era of Six Flags was marked by a greater focus on theming (see Batman: The Ride). Raging Bull was likely already in the design stage when the change in ownership occurred, so it maintained a heavily themed appearance (for a Six Flags park).

According to the ride’s page on the Six Flags Great America website, Raging Bull is named after a “ferocious beast that terrorized the citizens of the old Southwest Territory until they fled the town and built the courtyard and mission seen today. The old mission serves as Raging Bull’s loading platform.” 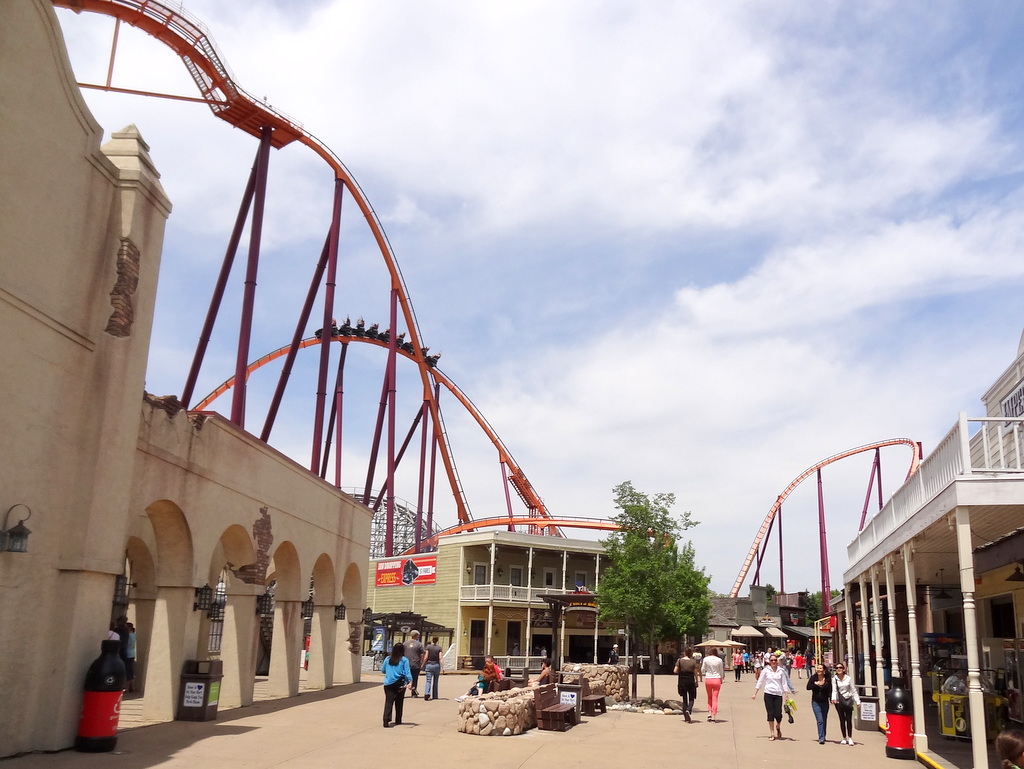 From the orange and purple Southwestern color scheme to the dilapidated Wild Wild West queue and station, Raging Bull fits perfectly into the Southwest Territory area.

Raging Bull’s 202-foot-tall lift hill provides beautiful views of the Chicagoland area. On a clear day, the Chicago skyline is visible — if you can turn your head around far enough as the train climbs the lift hill. 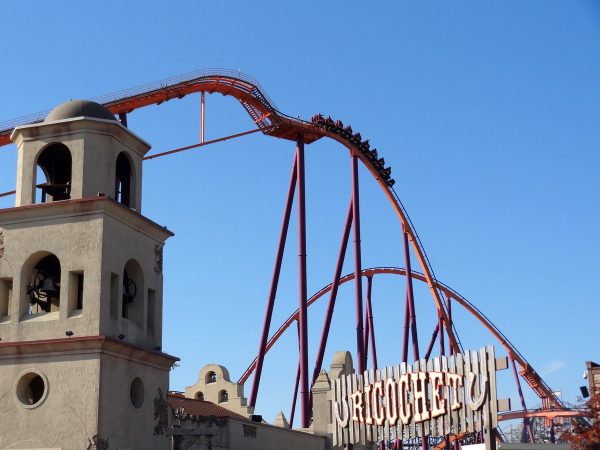 To this day, it remains the tallest coaster at Six Flags Great America. 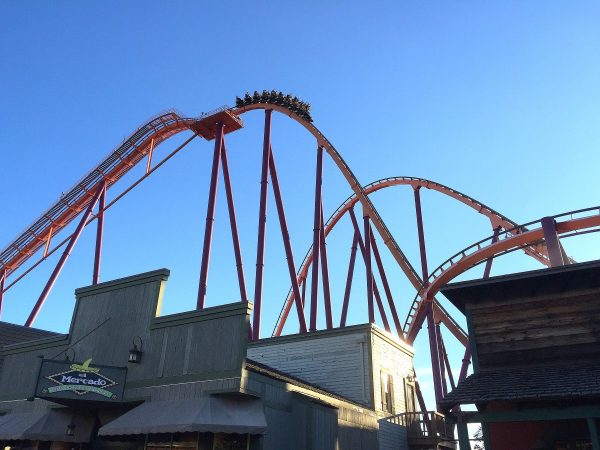 The menacing lift hill ends with one of B&M’s signature “pre-drop dips,” which is designed to reduce stress on the lift chain. They’re far less common in the company’s newer coasters. 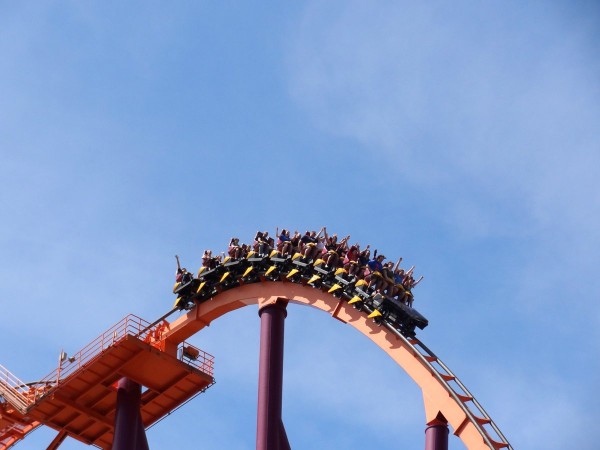 After the tease of a drop, the train then plummets 208 feet into an underground tunnel.

The roar of the train as it blasts through the tunnel sounds much like a “running with the bulls” event in Spain. 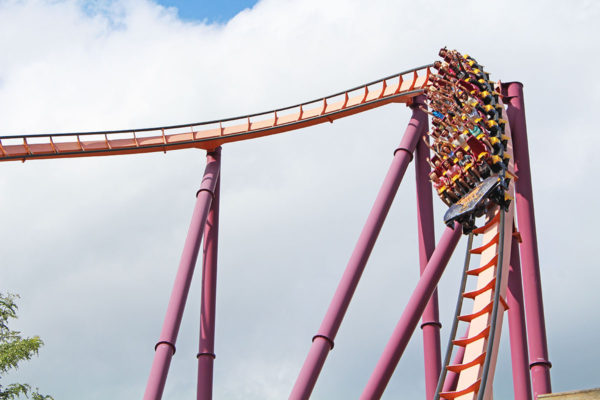 That first drop is where the traditional out-and-back B&M hyper as we know it ends. The coaster climbs into a 155-foot-tall banked turn, soaring over the Viper wooden coaster’s queue line. 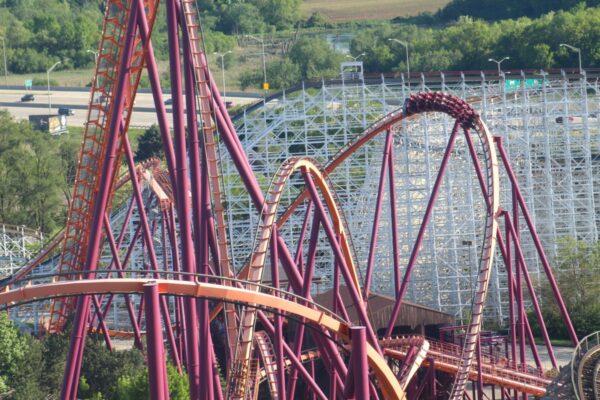 The coaster then speeds over a 14-story camelback hill followed by a 128-foot-tall banked turn that passes high above the brake run and maintenance shed (which the trains pass through on the final brake run as they return to the station). 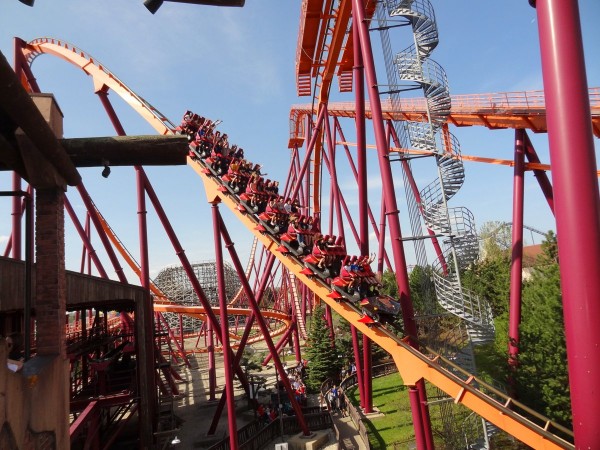 Those waiting in line get an up-close look at the train as it plummets down the banked turn. 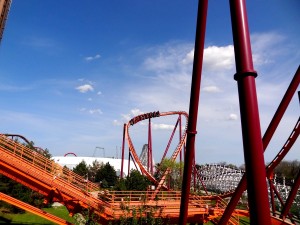 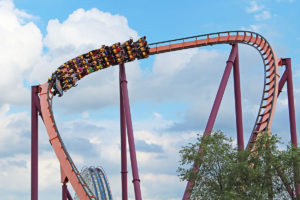 A hammerhead turn sends the train toward the mid-course brake run. 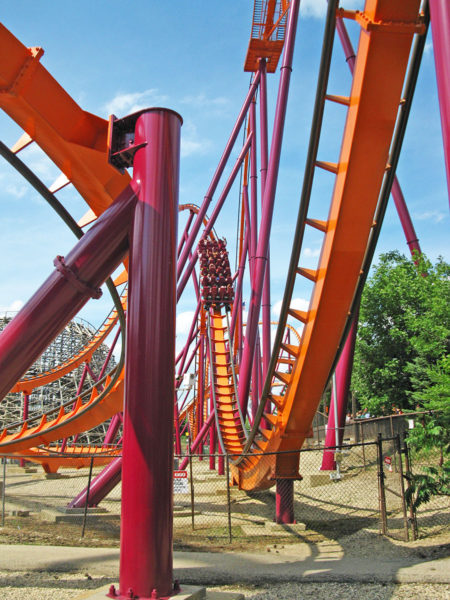 The reprieve is short as the train dives down again (say “cheese” for the camera!) and up into another airtime-filled hill. 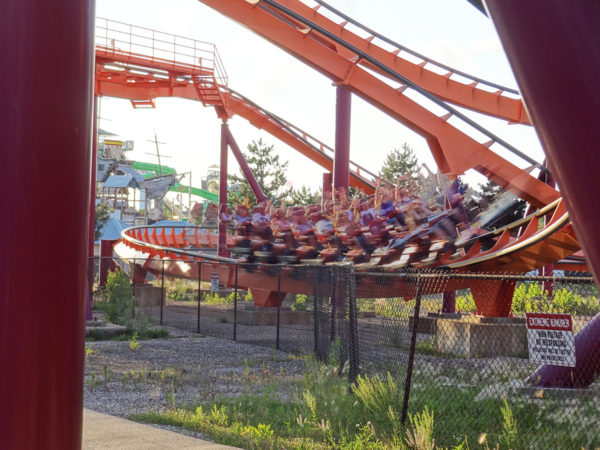 The train makes one more turn and dives into a figure-eight finale. It maintains a considerable amount of momentum as it enters the brake run, coming to an abrupt but smooth halt. It’s not uncommon for a train full of riders to erupt in applause. 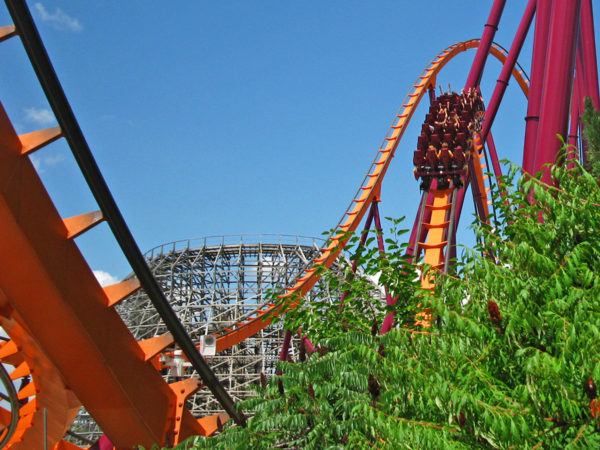 In 2008, the coaster received a much needed fresh coat of paint. The following season, a new logo and entrance sign replaced the original. The new logo features a much angrier-looking bull. 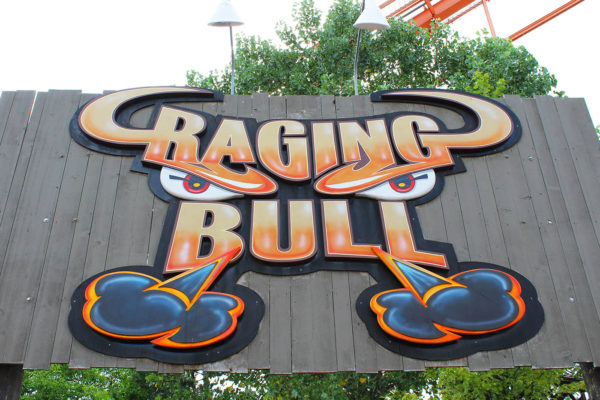 I preferred the original 3D sign. But the new bull certainly appears to be much angrier.

To this day, B&M hasn’t made a hyper coaster quite as compact and twisted as Raging Bull (dive coasters excluded), which makes the coaster even more significant when considering how many B&M hyper coasters and giga coasters exist in the world.

Have you ridden Raging Bull? Share your thoughts about the B&M hyper-twister coaster in the comments section below. 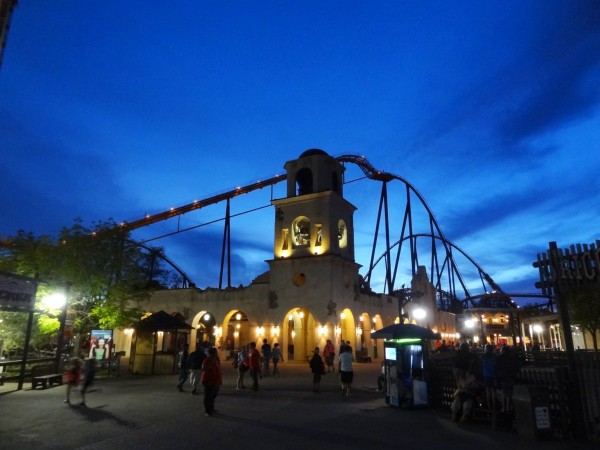 See the other coasters featured in our 19 for ’99 series here.