With a free day in Western Pennsylvania earlier this month, I decided to tackle two “new-to-me” (but far from “new”) parks before visiting Kennywood for Steel Curtain Media Day. Following a brief stop at Conneaut Lake Park, I drove just under an hour north to another park that opened in the late 1800s, Waldameer. 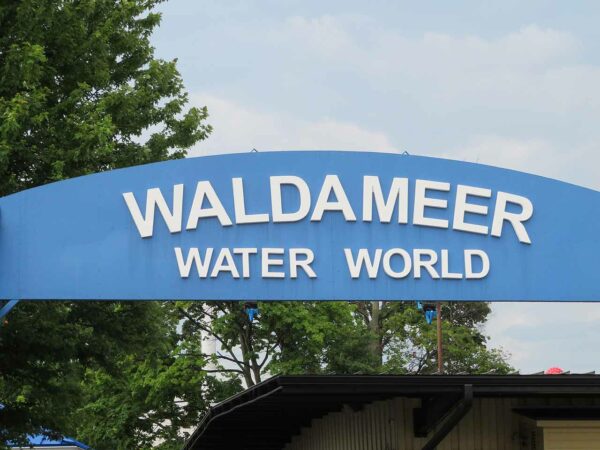 Established first as a picnic area called Hoffman’s Grove, the area was purchased by the Erie Electric Motor Company in 1896. The park was renamed Waldameer, which is German for “Woods by the Sea.” One of only a handful of “Trolley Parks” remaining in the United States, Waldameer currently boasts more than 30 rides and attractions and its own in-park Water Park, called Water World. 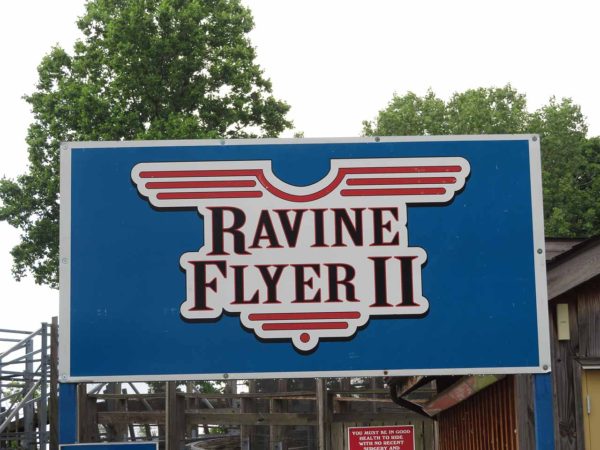 Arguably one of Waldameer’s most recognizable attractions is the wooden roller coaster, Ravine Flyer II. Designed by The Gravity Group, Ravine Flyer II received The Golden Ticket Award for Best New Ride in 2008 when the ride was constructed, and has been a top-8 wooden roller in the Golden Ticket Awards each year since 2009, reaching its peak at #5 in 2016. 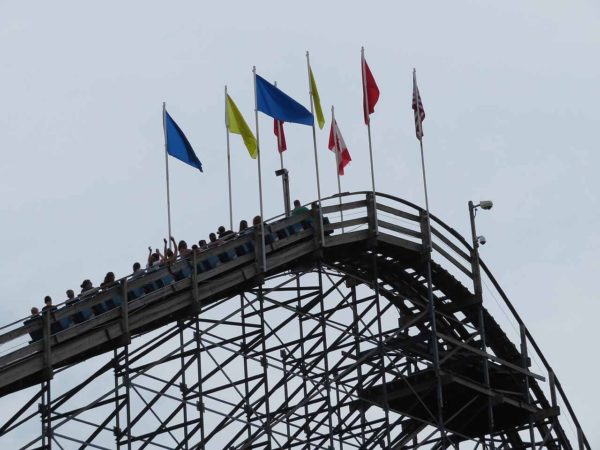 Ravine Flyer II truly has a little bit of everything going for it from a wooden coaster perspective. It has speed, topping out at 60 mph. It’s smooth enough that the coaster provides a very enjoyable ride, but rough enough to give the feel of a classic wooden coaster. It has multiple tunnels, great banked turns, and some great pops of airtime (or “hairtime,” as evidenced in the photo below) especially in the back row. After multiple rides on Ravine Flyer II, I personally feel that it cracked the list of my top 3 wooden coasters I’ve ever ridden. 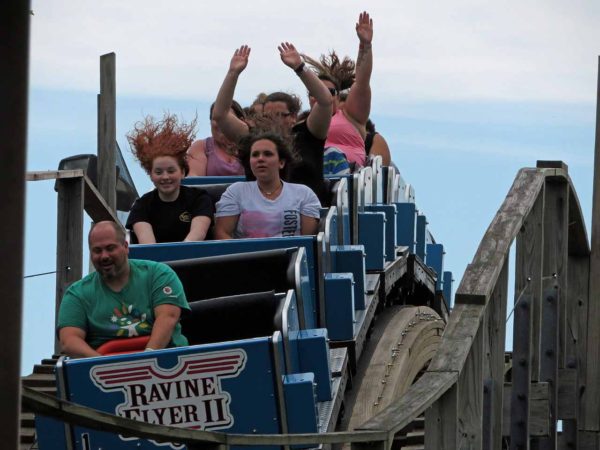 I feel the “sweet spot” here is a ride in the back row for the airtime, but I enjoyed all the rows I sat in! As you ascend the lift hill, there is a phenomenal panoramic view of Lake Erie. With a height restriction of only 48″, Ravine Flyer II would make an amazing first “big” coaster experience for a coaster enthusiast in training!

After you’ve ridden Ravine Flyer II, there are also three other “coaster credits” up for grabs at Waldameer. 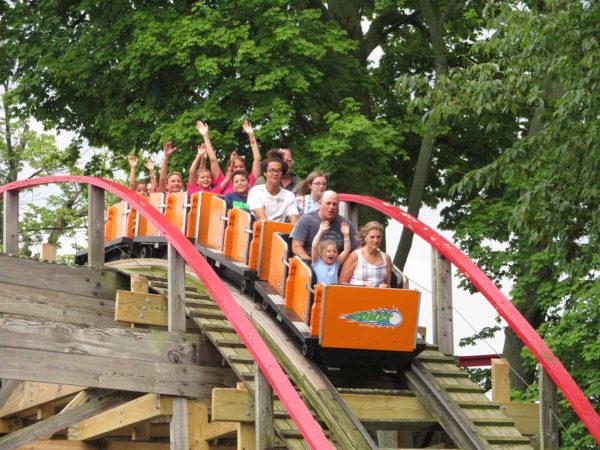 Comet, Waldameer’s “junior” wooden coaster, has been operating since 1951, and was manufactured by Philadelphia Toboggan Coasters, Inc. The coaster features a first drop of just 25′, but was definitely enjoyable enough for all ages. There were a few good airtime moments over the 1,900′ of track. 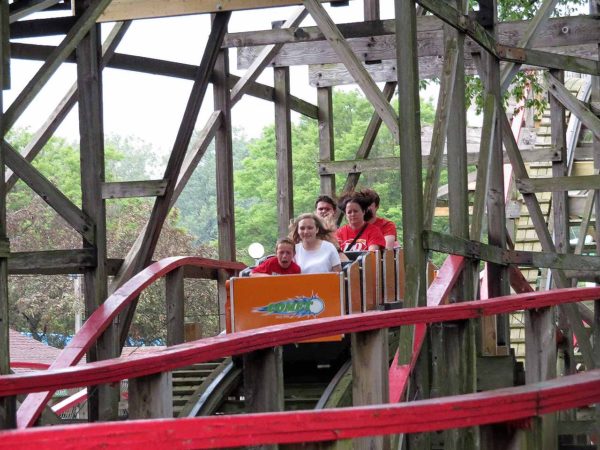 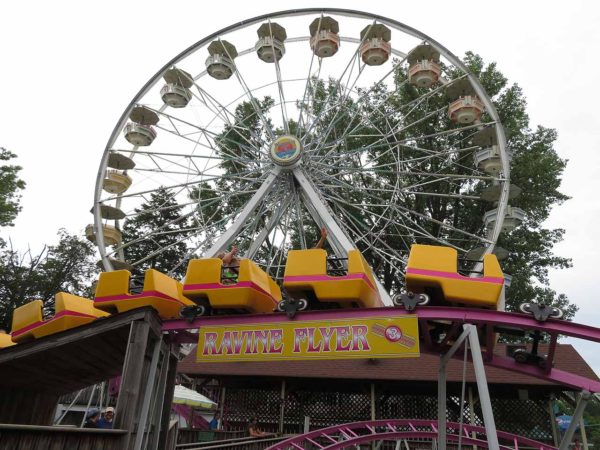 Opening 8 years prior to Ravine Flyer II was Ravine Flyer 3, a kiddie coaster from E&F Miler Industries. As kiddie coasters go, Ravine Flyer 3 was fairly standard, but it’s setting completely over water and in front of Waldameer’s Ferris Wheel proved to be pretty picturesque. Just look at those fountains! 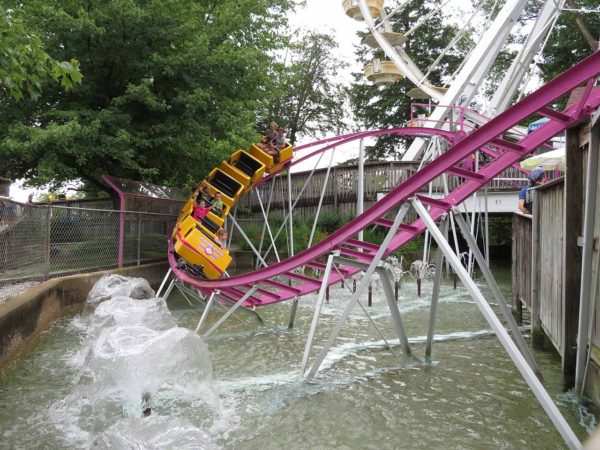 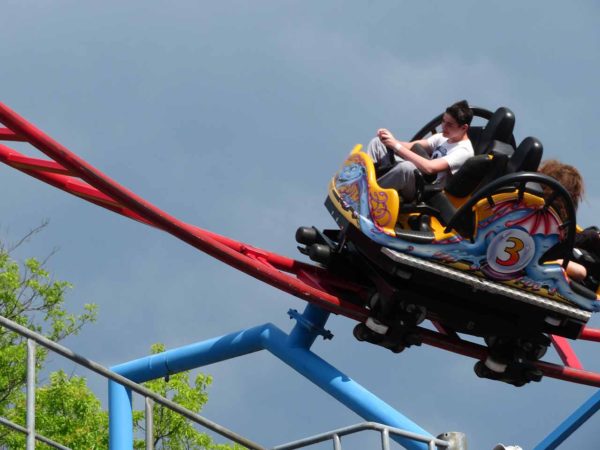 The fourth and final coaster credit at Waldameer is Steel Dragon, a spinning coaster designed by Maurer Rides that opened in 2004. I’m not usually one for spinning rides, especially coasters, but I found the spinning on Steel Dragon to be somewhat mild and very enjoyable. It definitely felt like a longer ride than the 1,391′ of track that comprise the coaster. 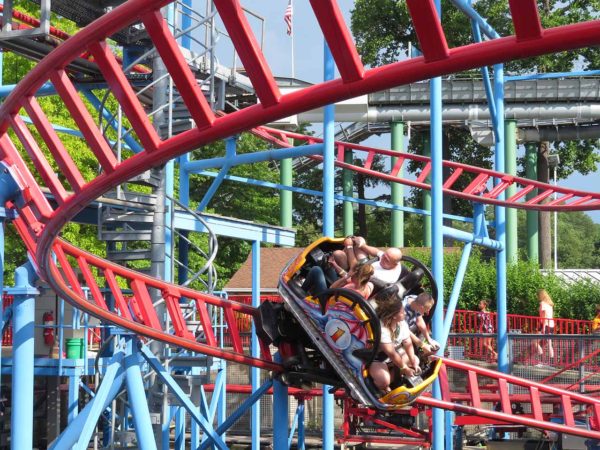 Outside of the roller coasters, there were plenty of hidden gems at Waldameer, including two “dark” attractions designed by legendary dark ride designer Bill Tracy: The Whacky Shack, and Pirate’s Cove. 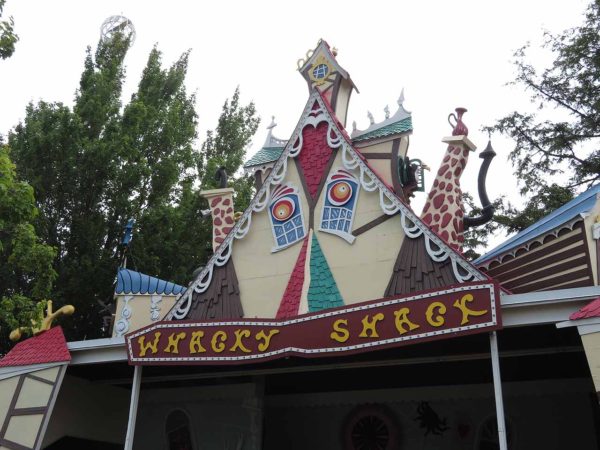 Whacky Shack had some very trippy elements in it, but also several great scares — I won’t spoil too much, but be alert if you’re sensitive to car horns! It definitely had the fun kitsch of a classic dark ride, and was definitely a few steps above, though somewhat in the same vein as, Devil’s Den at Conneaut Lake, which I had experienced earlier in the day. 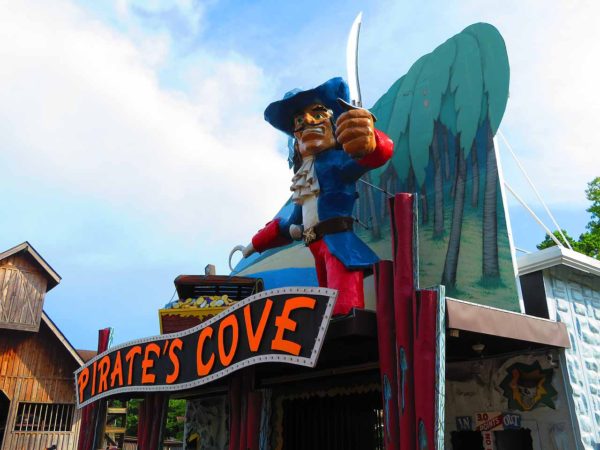 Pirates Cove had the feel of a fun house that you’d walk through at a State Fair, but taken up a notch with theming. Despite its age, Pirate’s Cove was incredibly well maintained, and the pirate theming was very consistent throughout. With both Whacky Shack and Pirate’s Cove being designed by Bill Tracy, there were some similarities in the two attractions, but I’m glad that Waldameer is taking such great care of these classic attractions. 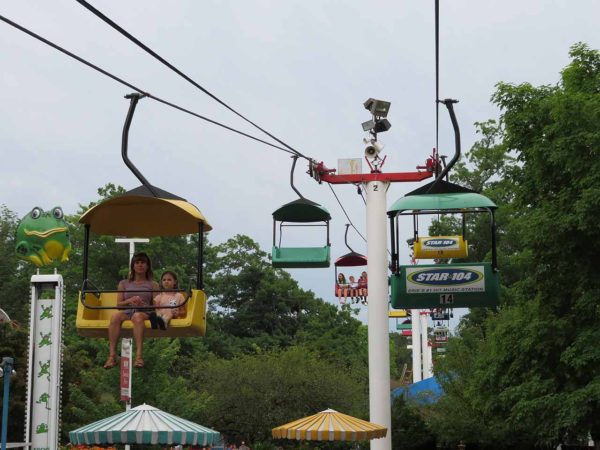 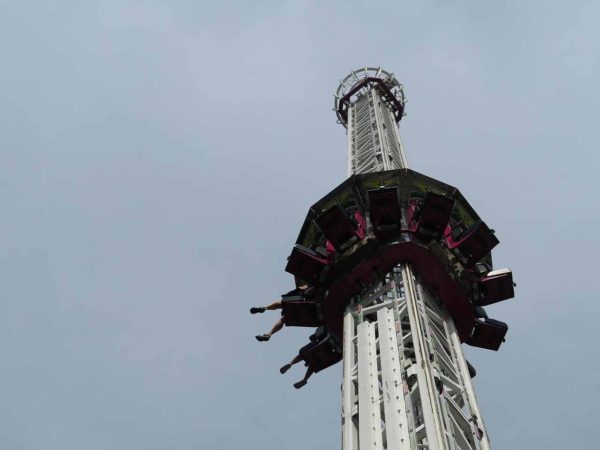 X-Scream, Waldameer’s drop tower, stands 140′ tall. I’m a big fan of these “smaller” drop towers, because there’s such a great free fall feeling, especially because X-Scream does not pause at the top, so you’re caught somewhat off guard as you begin to drop. 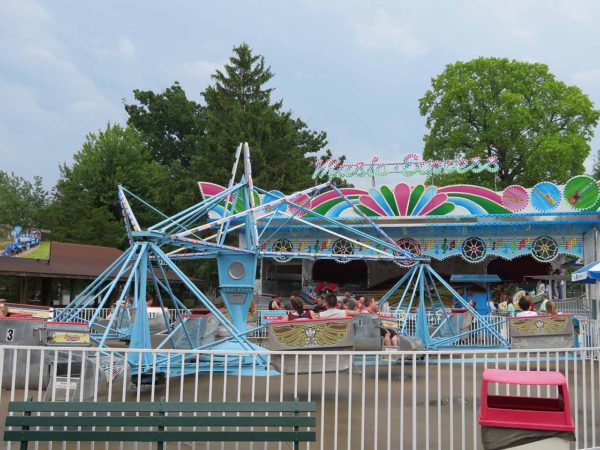 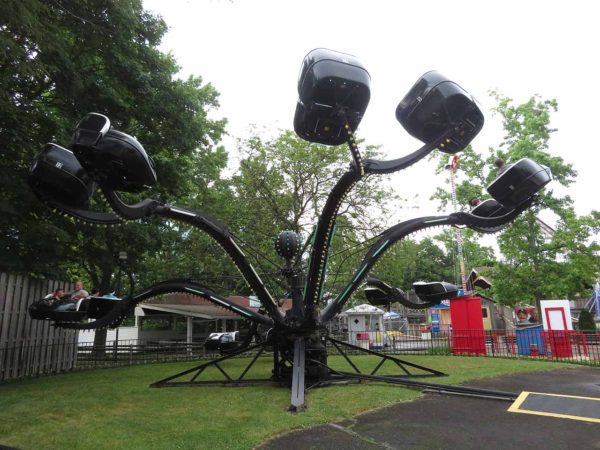 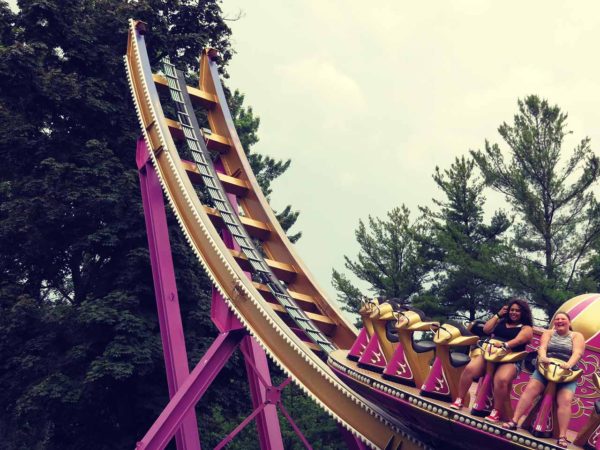 Waldameer had a pretty great collection of flat rides, including a Scrambler, Music Express, Monster, and Zamperla Disk-O. There is also a miniature railroad, Ali Baba, Tilt-A-Whirl, and Paratrooper.I didn’t get the chance to take rides on these, but they looked fantastic. Waldameer’s “New for 2019” attraction, Chaos, a Zamperla Discovery, was not operating when I visited. 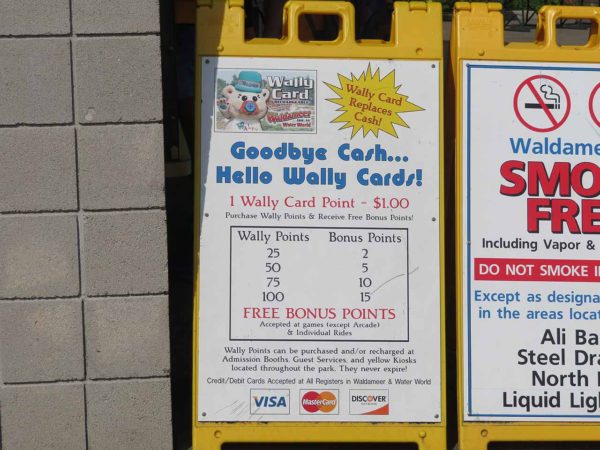 One thing that I found pretty interesting about Waldameer was that the park was “cash-free.” All purchases had to be made with a credit card or “Wally Card,” where the points translated to cash value. Waldameer is a park that doesn’t charge an admission fee, and instead has you buy a wristband or Wally Card to access the rides and attractions. Parking was also free at Waldameer.

In summary, Waldameer felt like a truly “hidden gem” in the theme park world. It’s located about midway between Cleveland, OH and Buffalo, NY — approximately one hour and 40 minutes from both cities — and is just two hours north of Pittsburgh. If you’re visiting any of these cities, or Erie, PA specifically, it would make a fantastic addition to any trip in the region. It’s intimate enough that it feels like a small park, but there is enough to do for a full day’s worth of visiting! 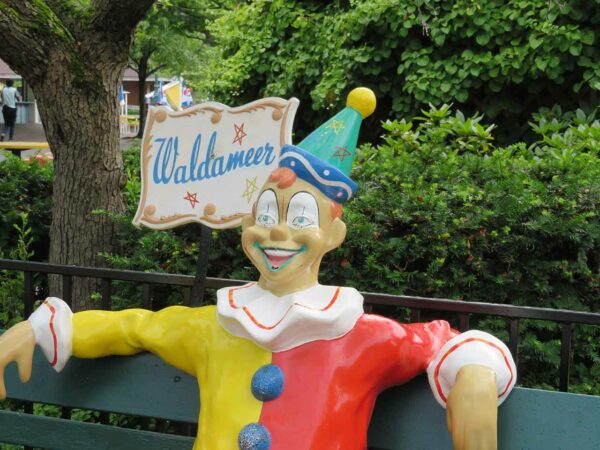 The “dry-park” wristband cost me approximately $30, and was worth every penny, even if you just want to head to Waldameer and take endless laps on Ravine Flyer II.