Climbing to the Top of Thunderhead at Dollywood

Dollywood’s annual Thrills in the Hills event invites coaster enthusiasts and Dollywood super fans to a two-day showcase of the park with perks such as extra ride time on select rides, behind-the-scenes tours, good food and much more.

This year, attendees were treated to a climb up the Thunderhead wooden coaster’s 100-foot-tall lift hill for an extended look at the new-for-2019 Wildwood Grove and Timber Canyon areas of the park. 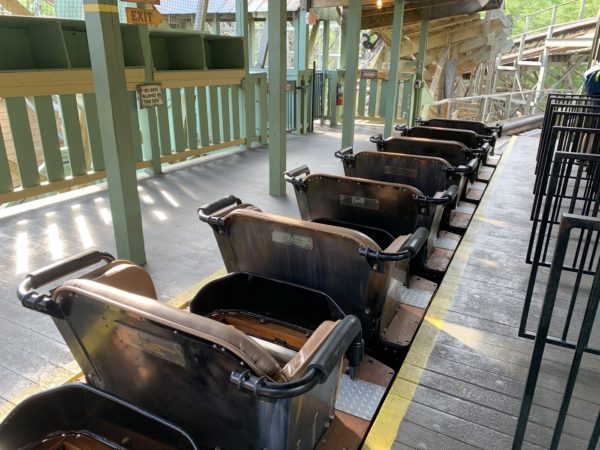 Our tour began about an hour before the park opened. I don’t think I’ve ever seen the Great Coasters International (GCI) coaster’s station this quiet and empty. 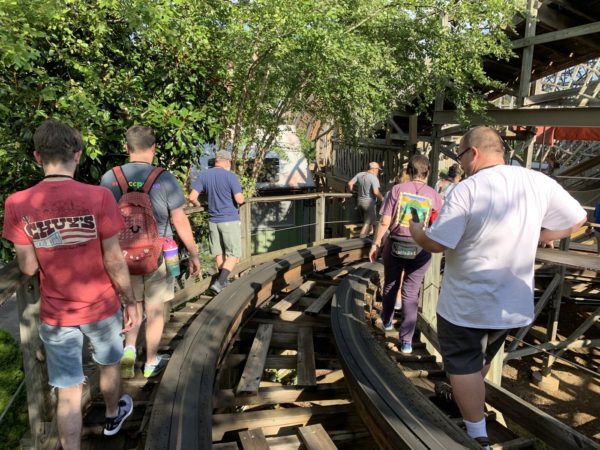 Thunderhead opened in 2004 and kickstarted the park’s expansion into new territory. The Thunderhead Gap area (now assimilated into Timber Canyon) was carved out of the hilly, wooded area of the park. It was also the park’s first wooden coaster.

Thunderhead crosses over and under itself a whopping 32 times during its 3,230-foot-long course. It reaches a top speed of 55 mph and features a rare station fly-through element. 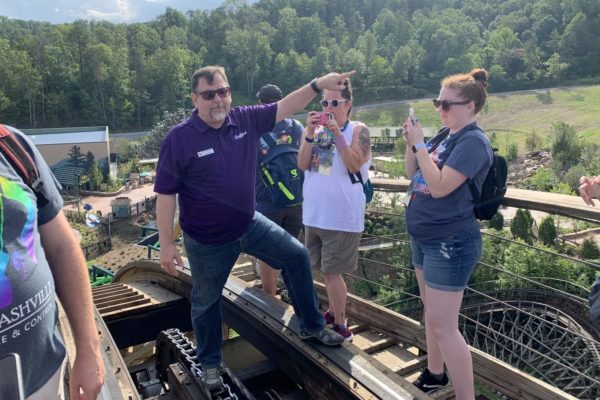 Pete told us that as soon as the sun crests the ridge of the Smoky Mountains, maintenance workers are on the track for inspections. He said that every one of the 250,000 bolts on the coaster sees a wrench at least once in the course of a year. It takes roughly six man hours to inspect the entire track. 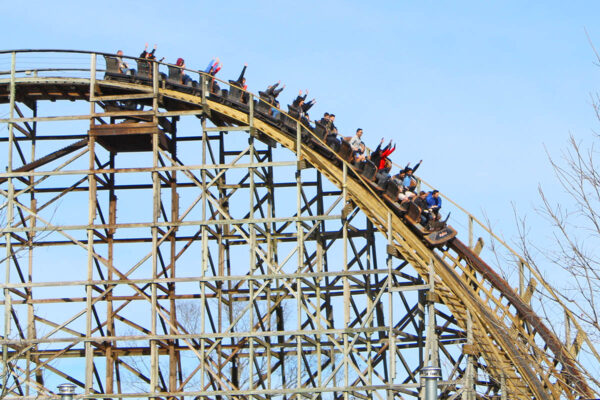 Due to Dollywood’s lengthy season (from mid-March through early January), GCI considers the coaster to have two “seasons” each year in regard to maintenance. 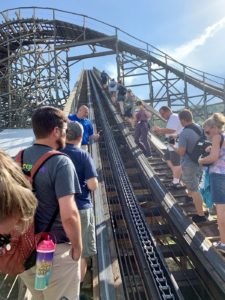 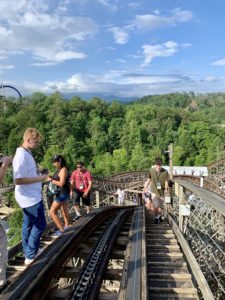 Ironically, I’m not a fan of heights — specifically when I’m not strapped into a coaster seat or restrained in some other way. I’ve never had an “evacuation” on a wooden coaster lift hill, so I wasn’t used to the “2×2” horizontal boards that served as steps. 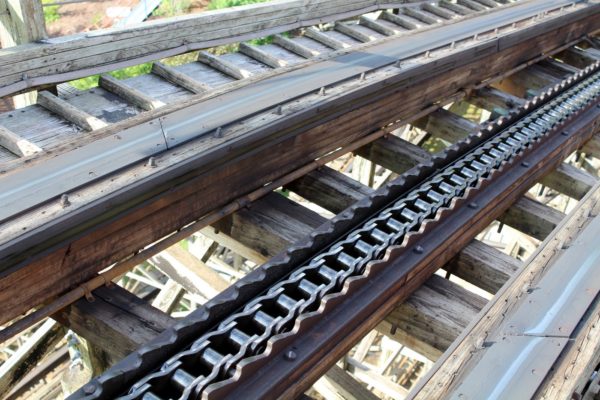 Thunderhead received a new chain lift this year — the third new chain on the coaster since it opened in 2004. It’s the same type of chain that operates on the Tennessee Tornado steel coaster. Chains typically last for 6-8 seasons. 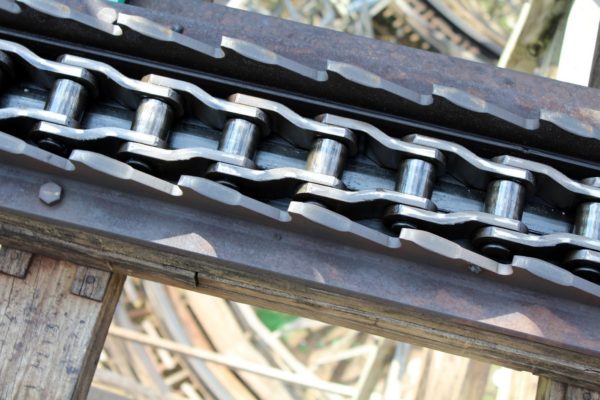 Some “Coaster-101” for you: the iconic “click-clack” of a traditional chain lift hill is made possible by the chain “dog” passing over these jagged anti-rollback “teeth.” 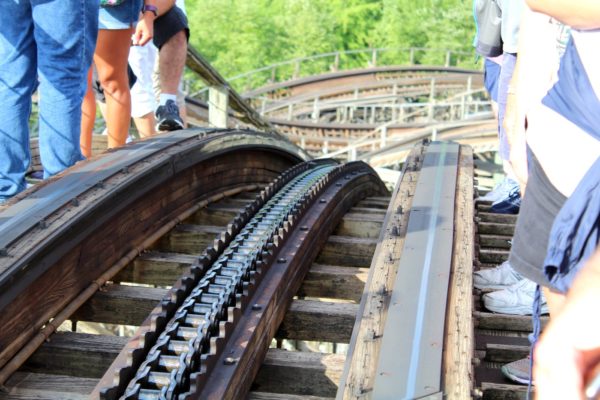 Each of Thunderhead’s trains is equipped with these anti-rollback “dogs” — pieces of metal that fall and rest in between each of those anti-rollback teeth as the train climbs the lift hill. 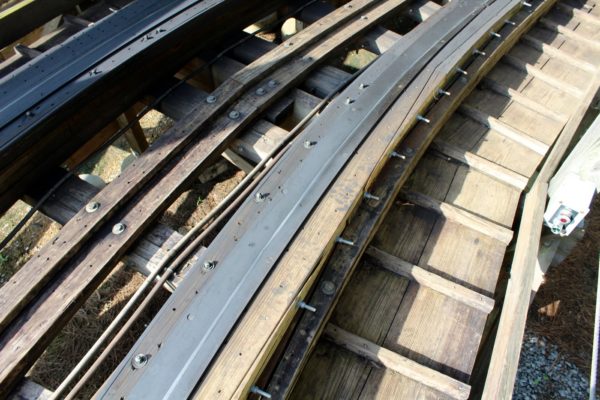 Barry told us that until recently the park has spent up to $150,000 each year in track refurbishment and replacement — and that’s on top of standard wooden-coaster maintenance costs. 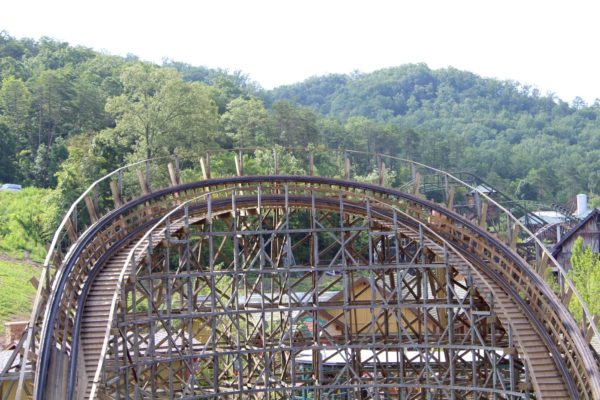 However, the park recently began a four-year total track replacement of Thunderhead which will cost roughly $800,000 for each phase. The first section of new track — completed during the 2018-2019 off season — includes the first drop and banked turn. 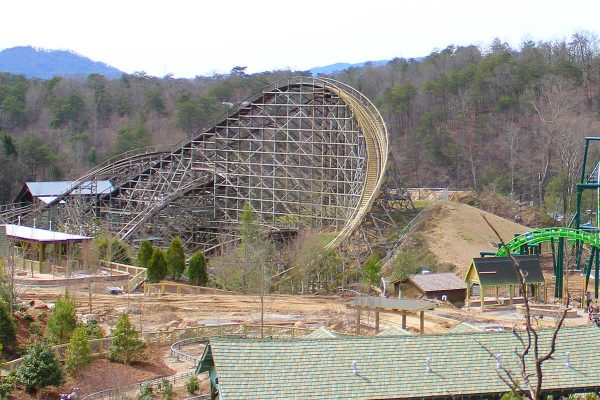 We discussed the noticeably smoother ride earlier in the year. 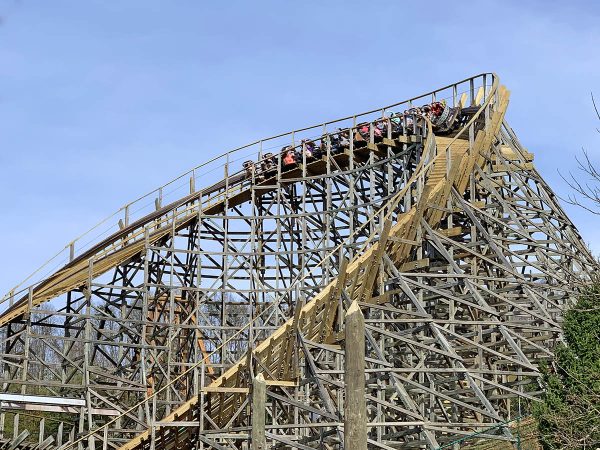 Instead of using treated pine wood, the park has begun installing a Brazilian hardwood known as “ipe” (ee-pay). The super-strength wood has the same structural characteristics as steel — for instance, it’s so dense that it doesn’t float. You can’t drive a nail into it — all of the holes must be pre-drilled. It has the same fire-resistance rating as steel. 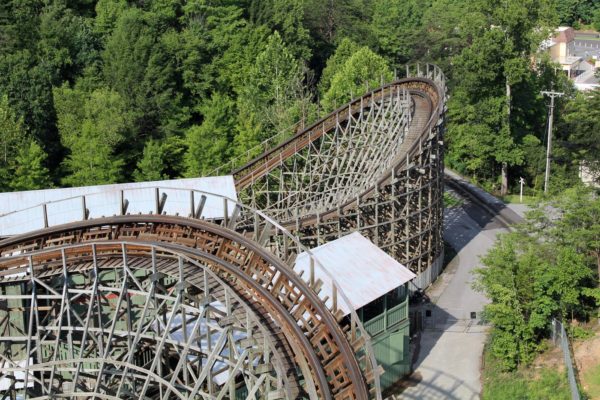 This stronger material prevents the steel track from digging into the wood, which is what necessitates a lot of wood coaster-related maintenance and rehab work. The sections of the coaster shown above will receive new track within the next year or two.

Barry expects that the new wood will last twice as long as the original. And since the current wood has lasted for 15 years, this new wood could extend the coaster’s life for 30 years, at least.

It’s amazing to see a park giving this much attention to a 15-year-old coaster, which is still a fun ride but has been dwarfed by some of the park’s newer attractions. They give it the same attention as the others — if not more. 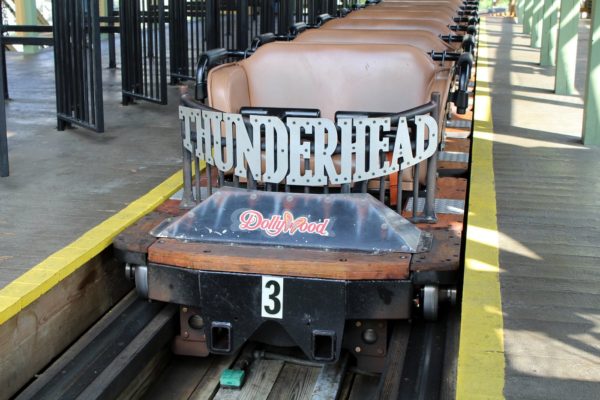 Thunderhead has four trains with a maximum of two on the track at any given time. Two of the trains came from the former Ozark Wildcat, which closed in 2008 with the rest of Celebration City, the park in Branson, Missouri that was owned and operated by Dollywood parent company Herschend Family Entertainment. The trains undergo extensive maintenance throughout the year. Three trains are in rotation during the season while one is taken apart for a ground-up rebuild and extensive testing.

To learn more about the maintenance Thunderhead trains receive throughout the year, read about our behind-the-scenes tour of the Dollywood Rides Maintenance Shop from last year’s Thrills in the Hills event. 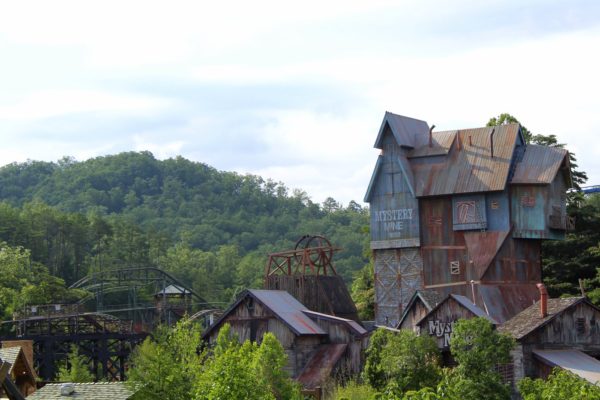 On our climb, we were treated to a view of the sprawling Mystery Mine layout and a portion of FireChaser Express, its green track nearly invisible in front of the canyon of trees. 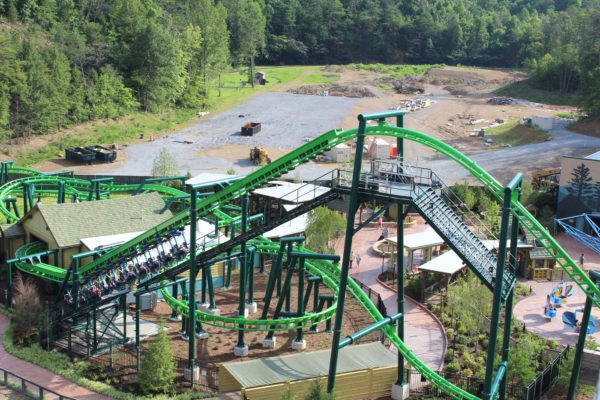 Work has already begun on the “second phase” of Wildwood Grove. While we weren’t given any specifics, I’m guessing that this will be an addition for the 2021 season. As 2020 is Dollywood’s 35th season, I anticipate something more park-wide for next season. 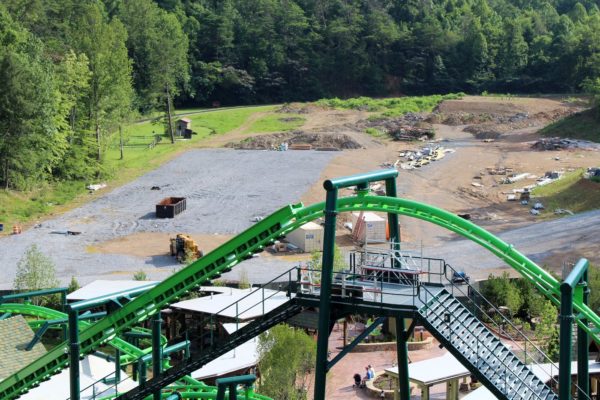 But as you can see, the park has plenty of room to work with — seven acres, to be exact. For scale, the first phase of Wildwood Grove comprises five acres. 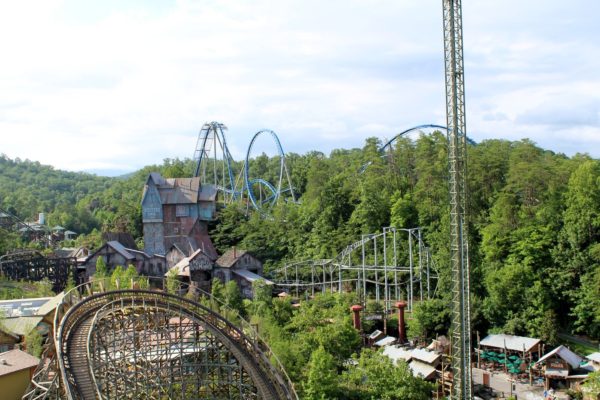 Dollywood is so picturesque, even more so from above the treeline — my photos do it no justice. 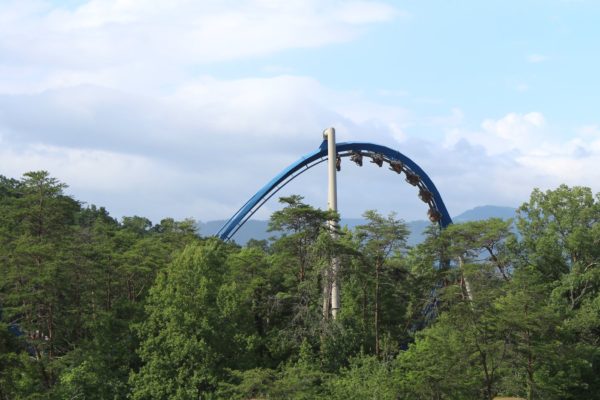 Since the park was not open, the coasters were generally quiet aside from a few test runs. Hearing the iconic Bolliger & Mabillard (B&M) roar cut through the Smoky Mountain air uninterrupted was a treat. 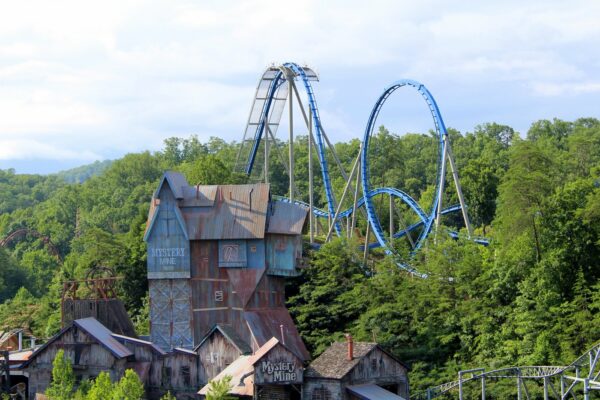 Dollywood’s VIP tour once included a trek to the top of Wild Eagle’s 210-foot-tall lift hill. If that part of the tour ever returns, sign me up. 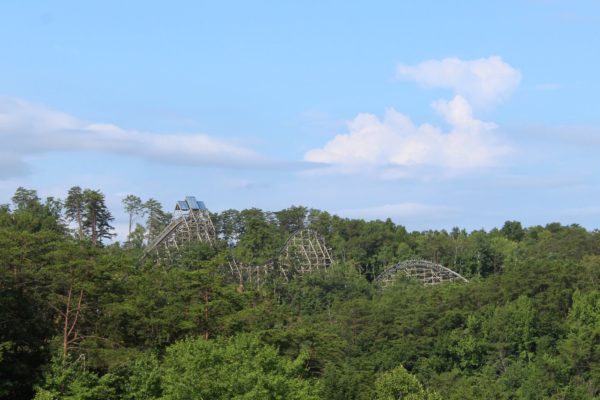 Lightning Rod also made a brief appearance — that’s another lift hill I’d like to climb someday. 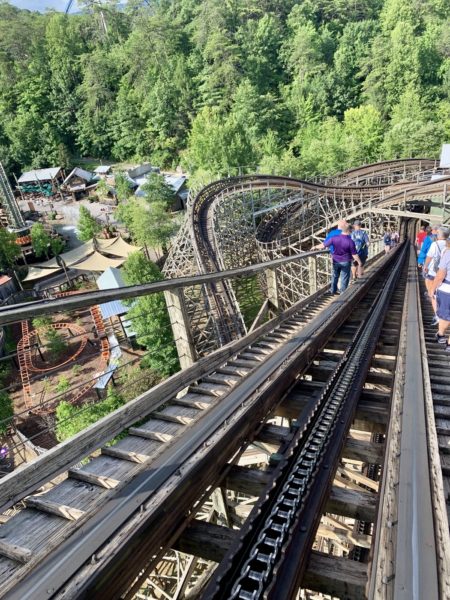 Though I could have stayed at the top of Thunderhead’s lift hill for hours admiring the view, what goes up must come down. The walk down was still unnerving, but by this time I was more confident in my footing. 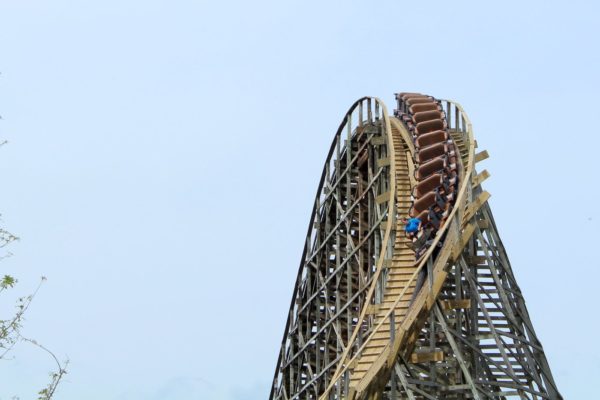 And then it was time to ride. My ascent to the top of Thunderhead’s lift hill, along with the insight from Barry and Pete, gave me a newfound appreciation for Thunderhead.

We’d like to thank Barry Stiltner, Pete Owens and the entire Dollywood team for taking time out of their busy summer-season schedules to give us a tour of Thunderhead and for holding such a fun event. I’m looking forward to next year’s event!